Manufacture Date: Made 1888 to 1893, when the firm moved to Starnberg, and possibly as late as 1901, when production ceased and the name sold to Leibl (Langwill, Ventzke).

Comments: In 1862 Karl Mendler Sr. gave birth to two wonderful things, Karl Mendler Jr., and the firm of Boehm and Mendler. Mendler had purchased all of Theobald Boehm's flutemaking equipment and continued making exquisite flutes to 1888. At this point, Karl Jr., by now age 26, who had been working for his father (now 55), officially became his father's successor.Karl Jr. stayed in Munich only five more years, to 1893,when he moved to the lovely lakeside town of Starnberg, 30 k southwest of Munich. Today Starnberg is the richest town in Germany (see Wikipedia); in the 1890's it held opportunities that proved more desirable than flutemaking to young Mendler. By 1898 Karl Jr. apparently owned a hotel, restaurant and wine merchandising business (Langwill). The luxurious life of urban flutemaking had been traded for the hustle and bustle of lakeside luxury. By 1901 he had stopped making flutes altogether, and he sold the business in 1903 (or 1904) to E. Robert Leibl, an employee of ten years previous who had set up as a flutemaker in Nuremberg.By 1907 Karl Jr. left the lakeside hotel business and moved to Stuttgart, now 250 k or so from his father who lived in Munich to his death in 1914. Karl Jr. passed away in Stuttgart in 1920.While it is clear that Karl Mendler Jr. inherited great skill from his father, it is perhaps possible to say that flutemaking was not his primary passion in life. The move from Munich to the lakeside in 1893, at age 31, would have removed him from regular contact with the musicians, makers, and followers of his father and Boehm who had populated his childhood and early professional life.Let us look at this flute and see what he hath wrought.The mechanism and set-up are exactly the Boehm and Mendler design, with a short post-embouchure head, a saddle-shaped gold lipplate, Boehm's classic seamed chimney with the seam on the inside wall (thanks to Gary Lewis for pointing this out). The body strap had to be slightly redesigned to accommodate the side G# posts, but we believe this had been already done by Karl Sr. back in the late 1870's or 80's.The tube is .011" at the tenons and lower footjoint.Essentially the only substantial design and construction difference with this flute and instruments of the father is the absence of a certain mystique that Karl Sr. put into his work. Although this instrument is of the highest professional quality, Karl Sr. was working with higher powers.The voice of Mendler is nonetheless a very pure and beautiful one, evoking not just the spirit of living at the forward edge of time, as Boehm and Karl Sr. had, but also the eternal beauty of the lakeside at Starnberg.As a player, even though the pads are poor this flute has the wonderful tone of the whole Boehm and Mendler output. There is a roundness of sound with a deep focus that gives this flute a sense of humor in a serious sort of way. Seemingly one could tickle the audience in a way that could make them laugh or cry, all at the same time.The instrument feels light and well balanced in the hand, with the excellent mechanical feel of the Boehm and Mendler genre.

Material: This handsome flute is made of silver body and keys, with gold lipplate and gold springs. The corkscrew is threaded wood, the crown interior also of wood. The crown is covered in silver, and the screw is capped in silver. Pad washers and screws appear to be silver.

System: This is the Mendler French model, with closed side G# and the thumb keys of Lot, as Boehm called them. The foot was originally to B and has been rebuilt as a C foot. There is Boehm's schleif key, near the thumb, for venting octaves.The only new element to this flute is the roller on the low D# key, which, I believe, is not seen on Mendler Sr. flutes.

Condition: This flute has been used, shortened from a B foot to a C foot, and repaired at the top and bottom of the body strap. In short, there is ample evidence that one or more players have loved this flute enough to bring it with them through many life changes.The crown has a small bump in the silver dome. The bottom of the footjoint has been removed, either due to damage beyond repair, or a desire for a C foot rather than the original B.The lipplate is completely original as far as the perfect entrance into the flute goes, yet there are signs the maker ran into trouble outside at the flange and chimney joint.The upper post at the trill keys shows some solder, especially under the strap end, suggesting something caused the strap to lift. The very lowest post, by the tenon, is also soldered, this time looking like the post itself had needed repair.The footjoint mechanism is altered to loose the low B key, mostly by simply inserting an insert where the B touch would have been on the silver hinge tube, and making a new steel for the D# with an extended nose to reach through the insert to a new bearing in the old hinge tube. The tone hole for low C is patched. The outlines of the old strap and tone hole are clearly visible, as though they had been drawn with a cutting tool.Back up to the top, there is a solder repair on the high C# key, as though the tail broke at one time.The adjustment screws are quite worn, another suggestion that this flute was well loved, and well played.Otherwise the flute is quite original.

Sounding Length: Sounding length 594 mm. There is a gap of 3 mm or so in the case possibly suggesting the headjoint was cut by this amount. The original sounding length is undiscoverable, thanks to the conversion to a C foot.

Case: In what may well be the original case, showing the space for the B foot, a small gap at the foot of the head, and a crutch hole which, like the space where a crutch would be on the flute, is empty. 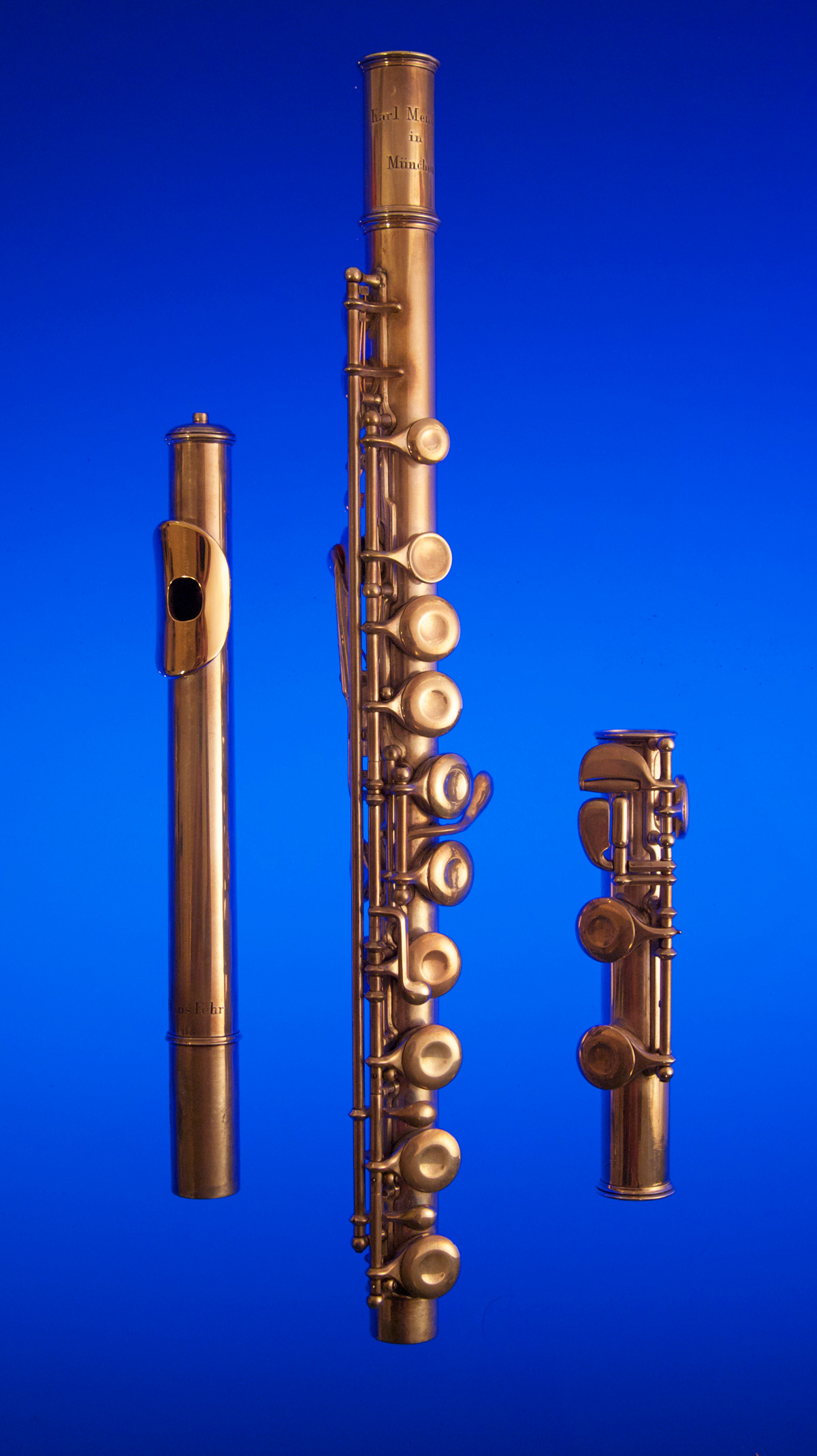 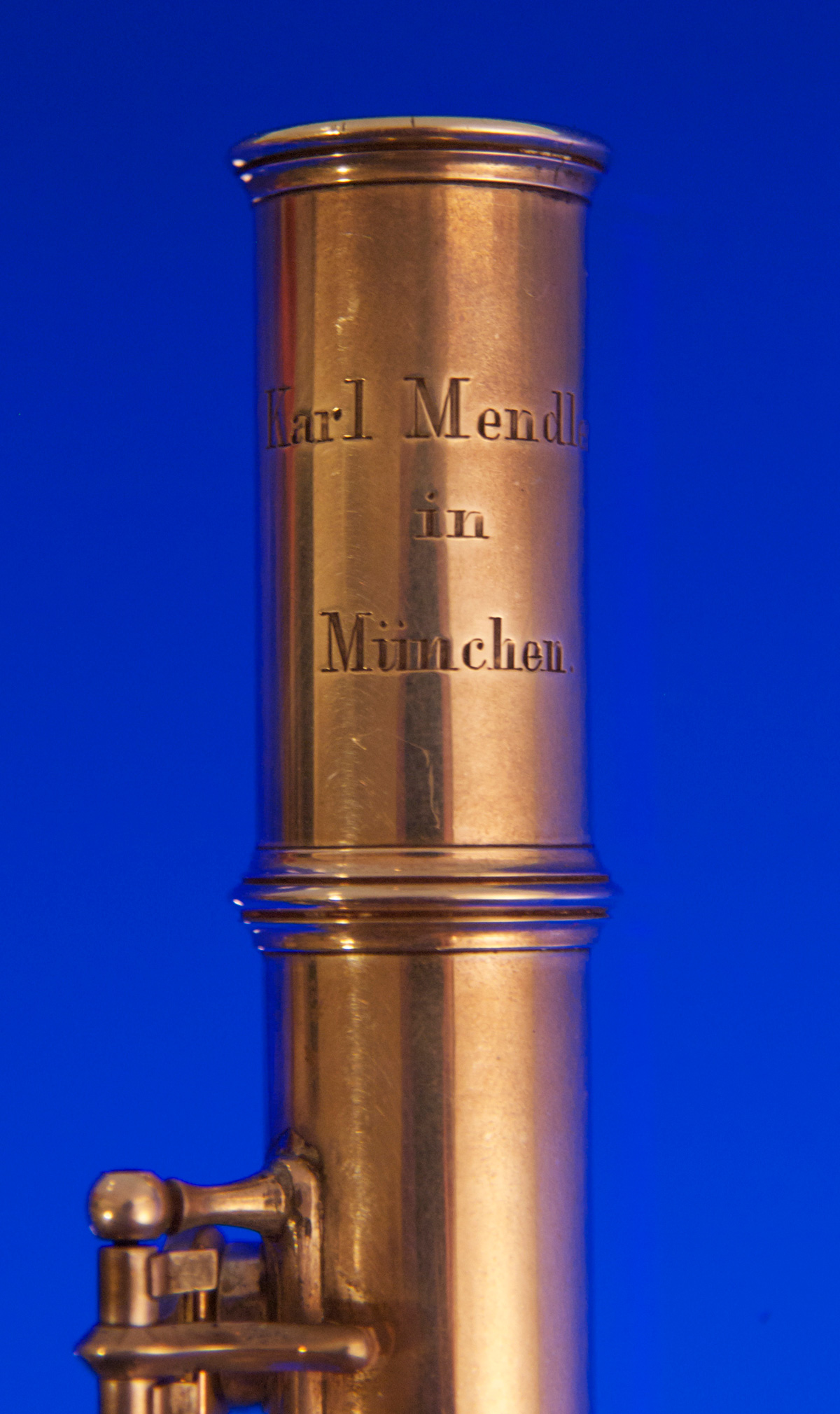 Karl Mendler Sr. was one of the greatest flutemakers of all times. This is the fruit of the son, and shows the talent and aesthetics of the family; the rich Bavarian tone of the Boehm workshop, with perhaps a hint of the lakeside retreat awaiting the maker. 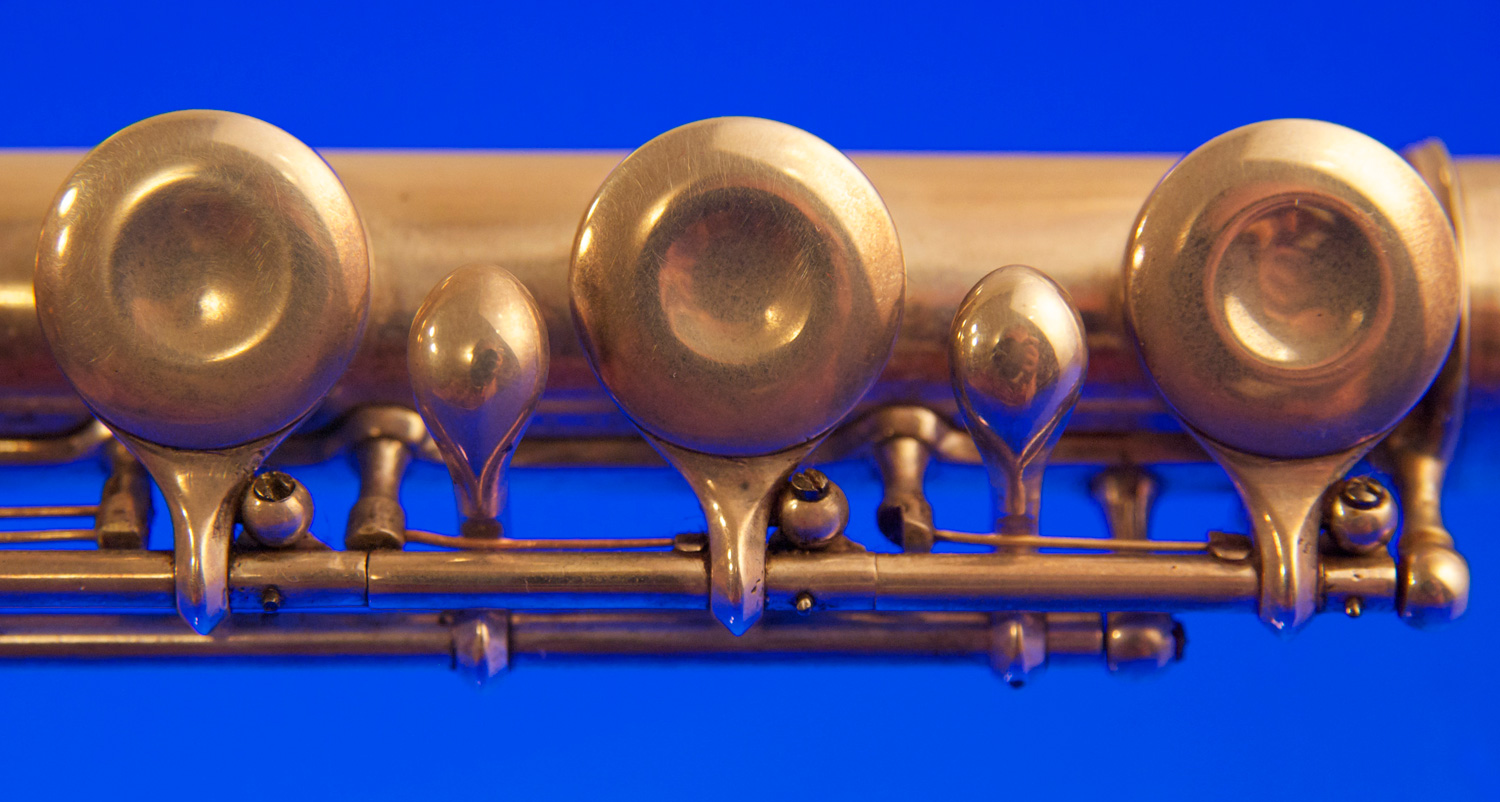 The mature right hand of Boehm and Mendler's Munich tradition. While Lot and Godfroy used cork and shims to adjust the delicate mechanism, Boehm and Mendler choose these little adjustment screws in tiny balls tucked into the crotch of the cup and arm. Note the bold and proud trill touches as well.

The most luxurious part of this flute is the dancing rib, which smoothly places itself at just the right spots in perfect time. 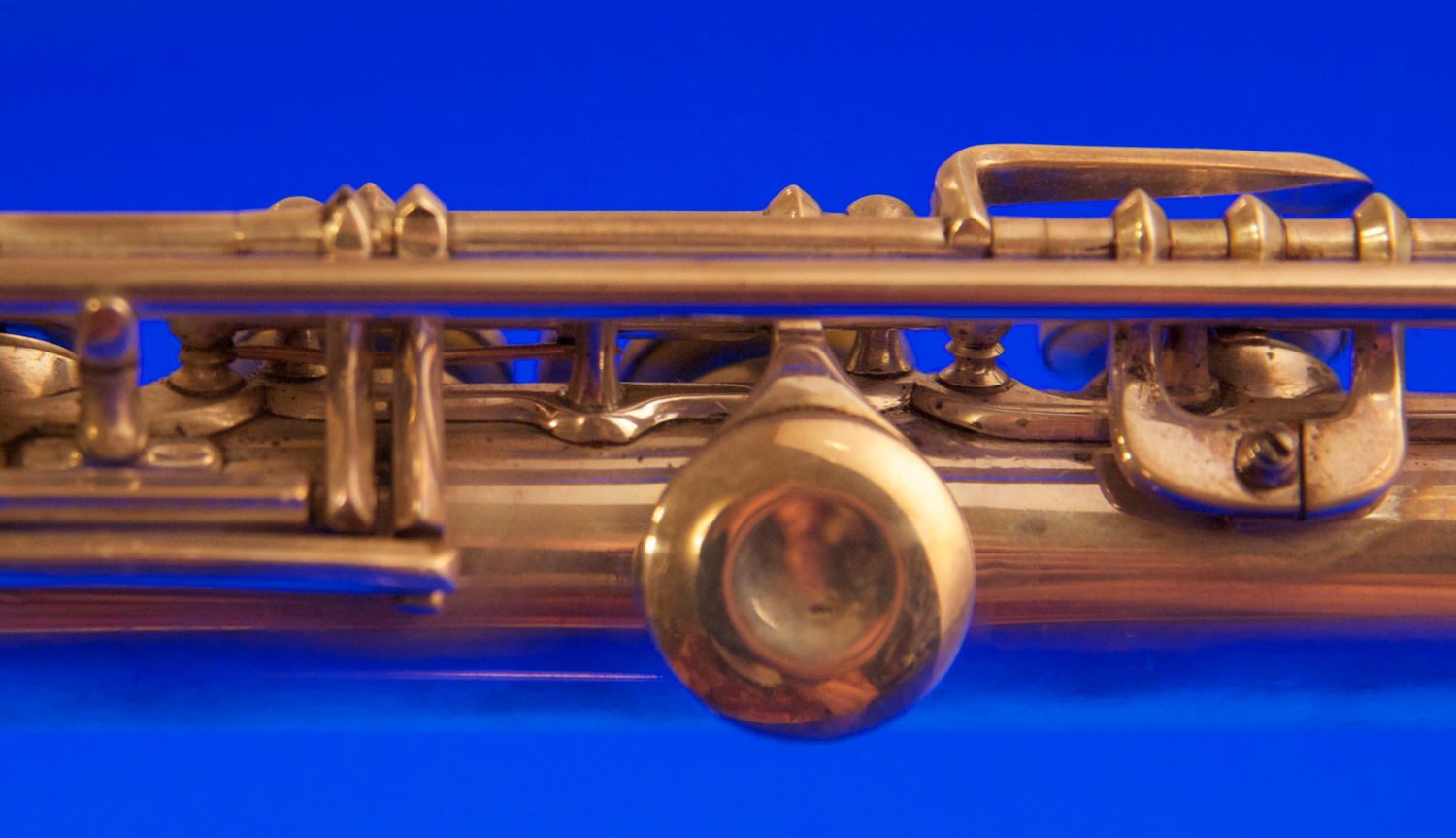 The rib waltzes through the G keys like a Fred Astair choreography, with grace, precision, and stimulating creativity. Such bold moves are made necessary due to the addition of the side G#, rarely seen on flutes from this workshop.

Boehm and Mendler's "saddle" design for the lipplate, the preference for gold, and short distance to the top of the flute are all maintained by Karl Mendler Jr. 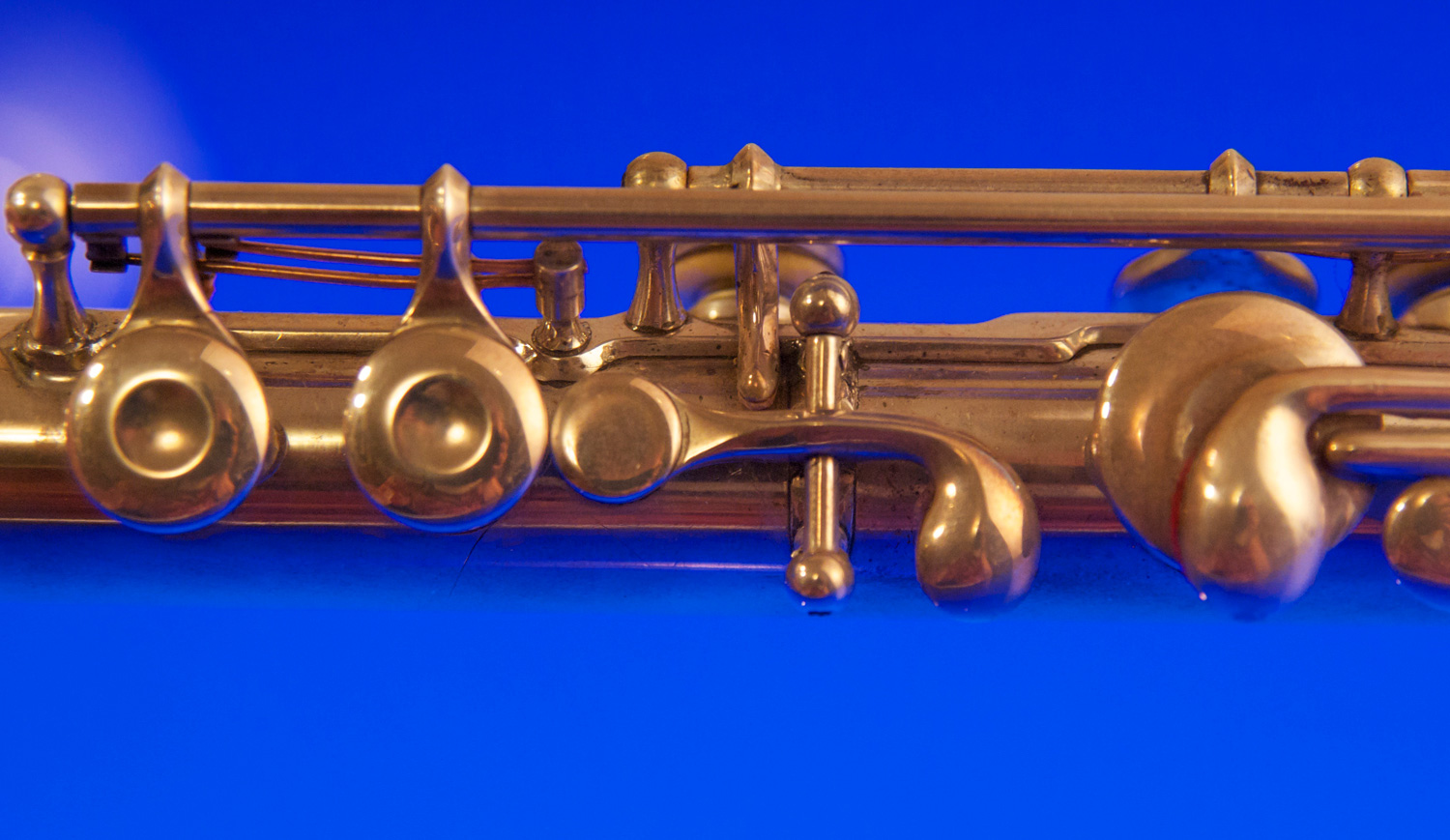 Here we see Boehm's little "schleif-key", meant to mimic the octave keys in other woodwinds. Dayton C. Miller found the effects of this key to be negligible, but Boehm found "this little key very useful if the player wishes always to be in tune in the following notes: D#, Eb, D3, D#3, Eb3, and A4." 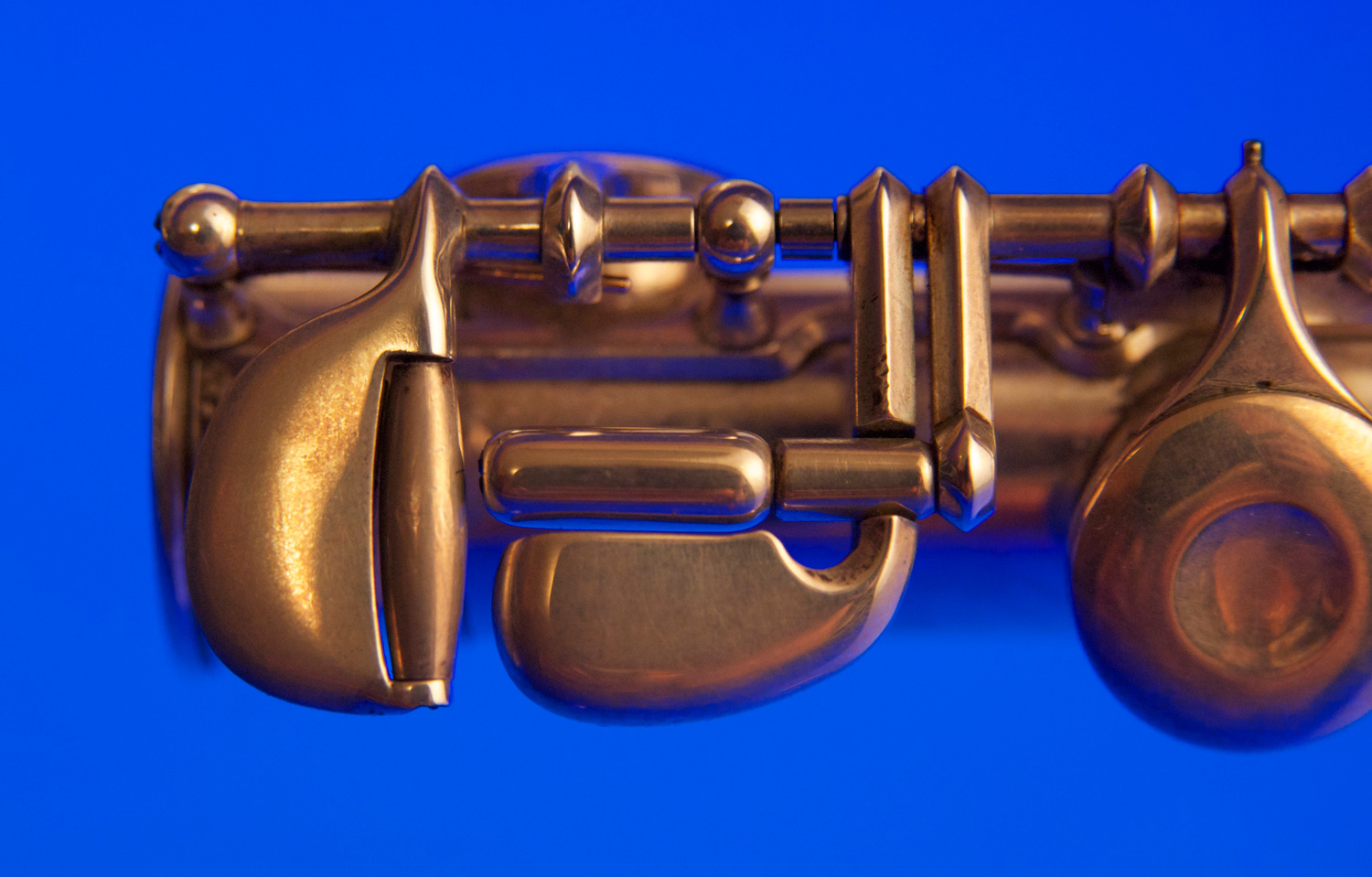 This is Karl Jr. at work. The boldly tapered roller on the D# key is new to this workshop. The wonderful swoop to the C# touch is accentuated by the scoop cut into the upper edge. One wonders if the old low B touch, which used to lie above the other two, had something to do with this otherwise decorative open space. 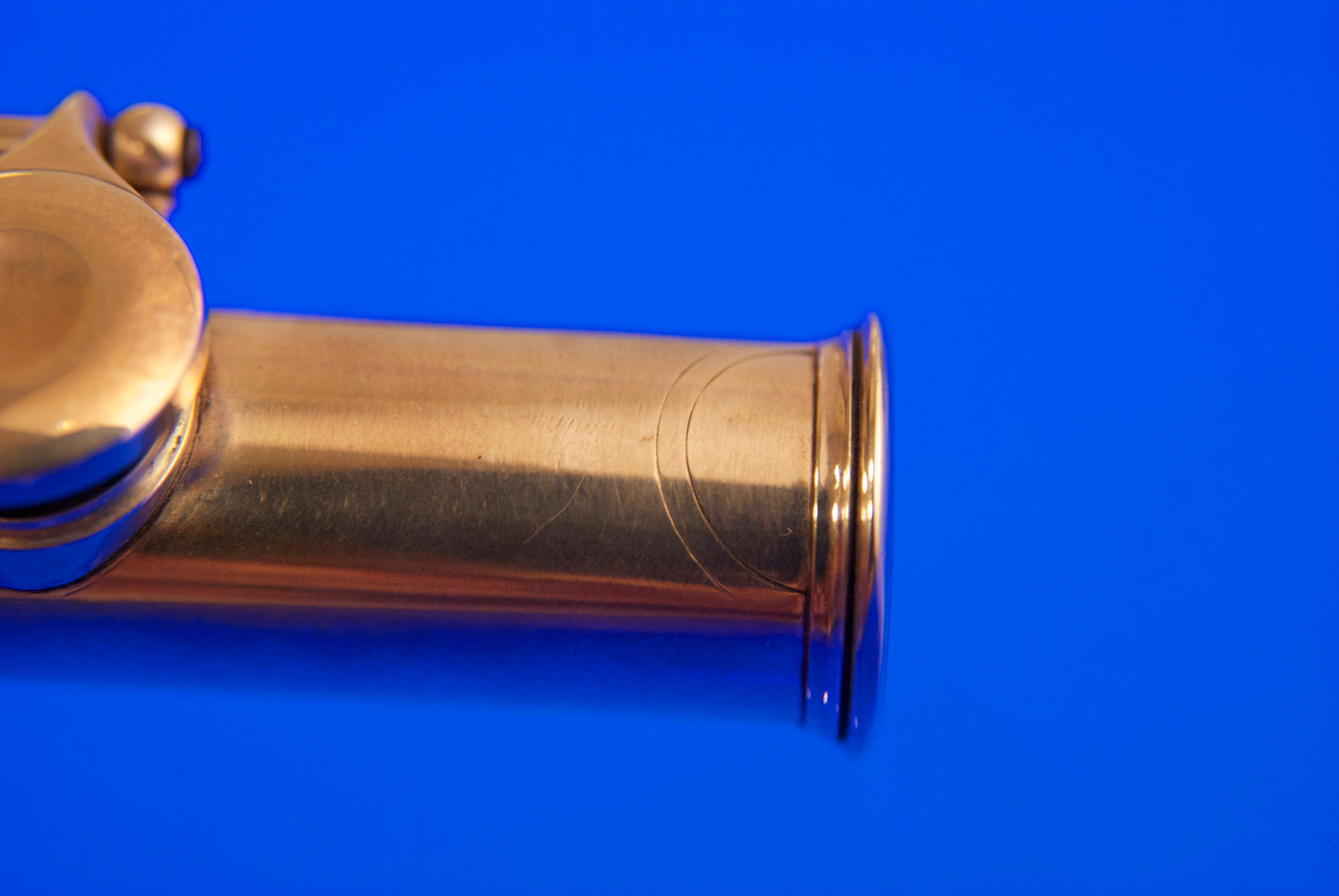 This remarkable and rare sight is of the old low C tone hole, when this was a B foot. The tone hole has been patched with a perfect match of silver, and the bottom ring reset. The tone hole ring would have been soldered between the lines. On the top edge of the flute (later photo) one can see the outline of the old strap position in the same way. 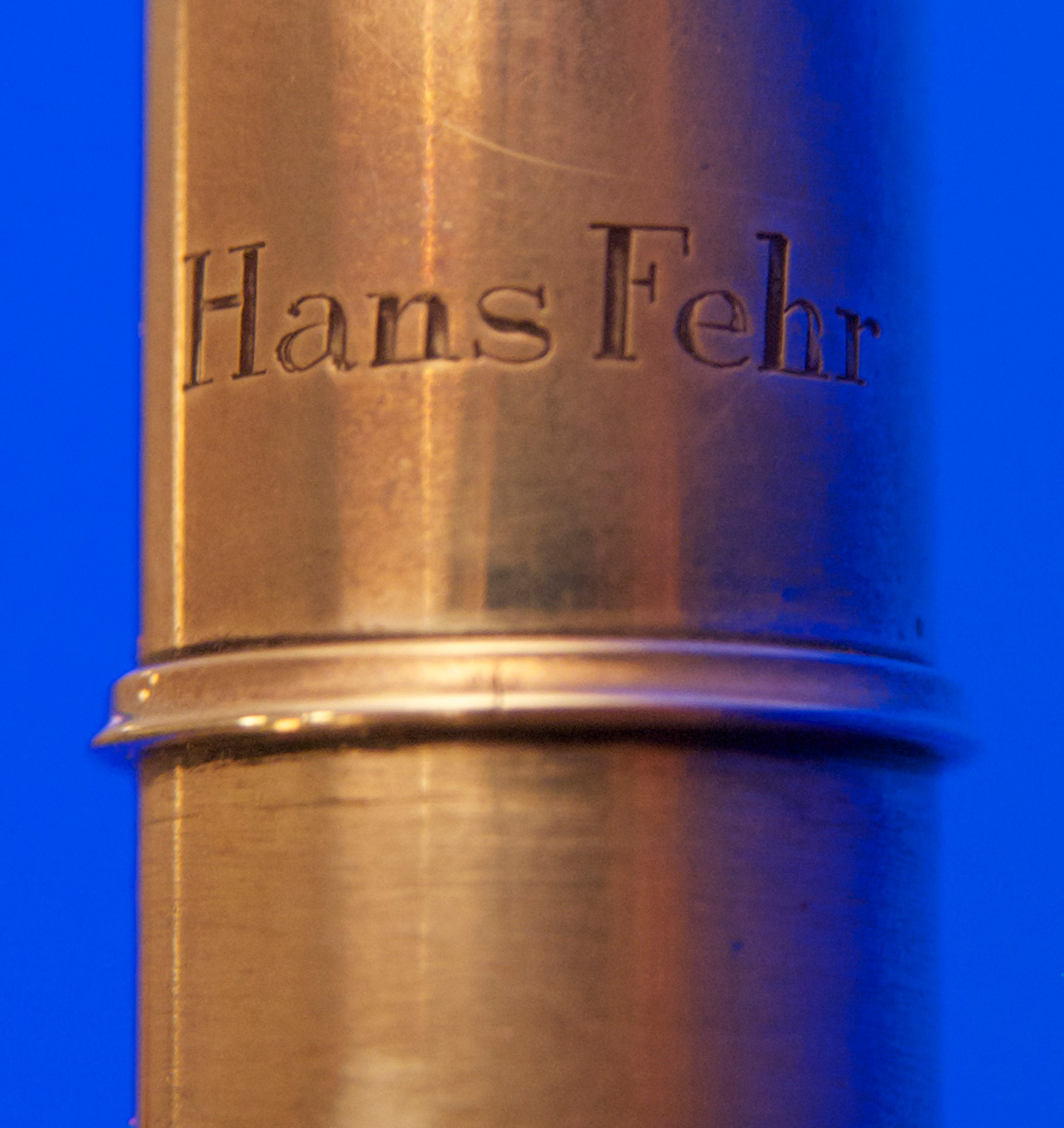 This flute was personalized with the name Hans Fehr. There was a famous Hans Fehr who was Privy Counselor in Munich at the turn of the century, who supported the artist Emil Nolde and others. 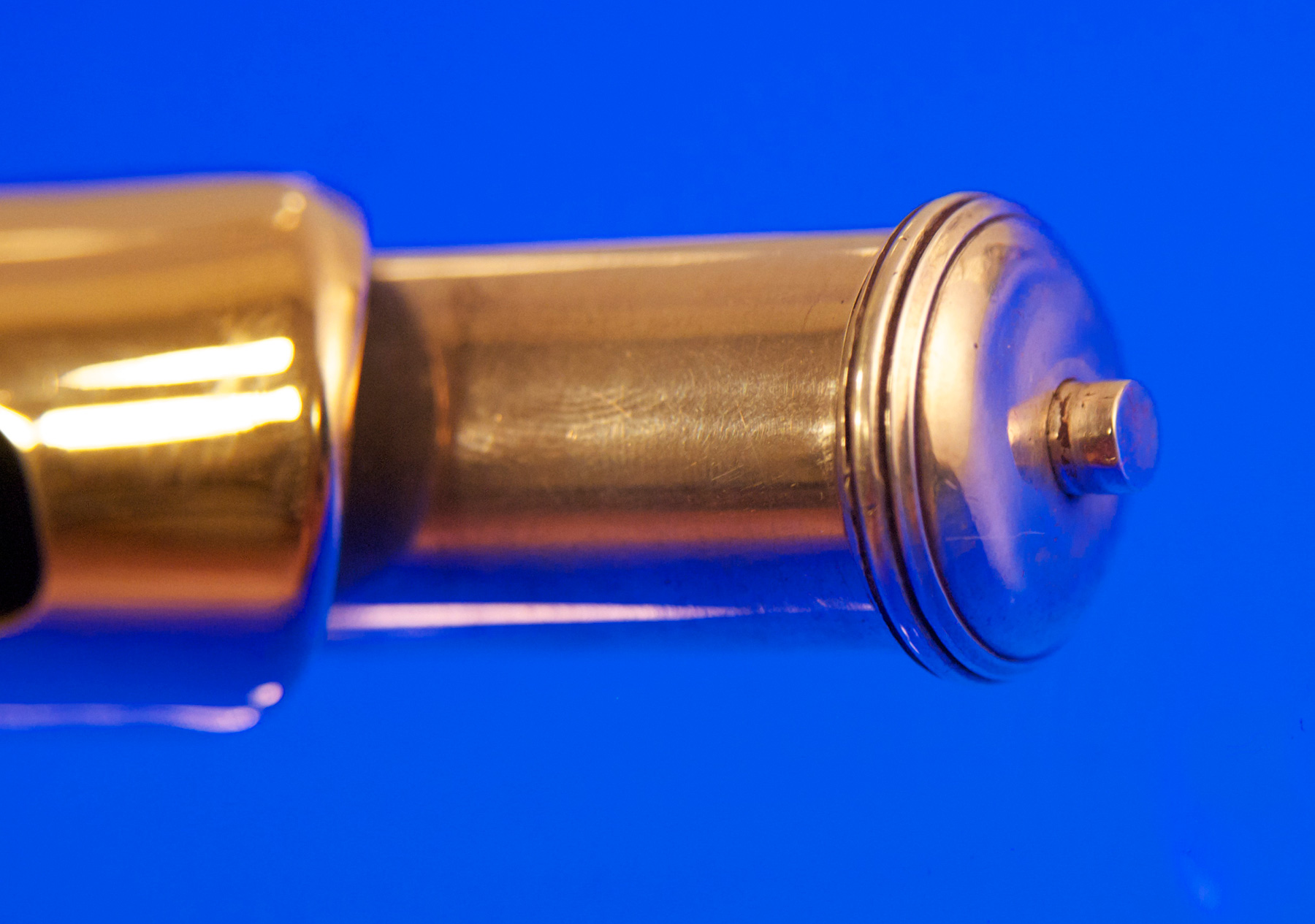 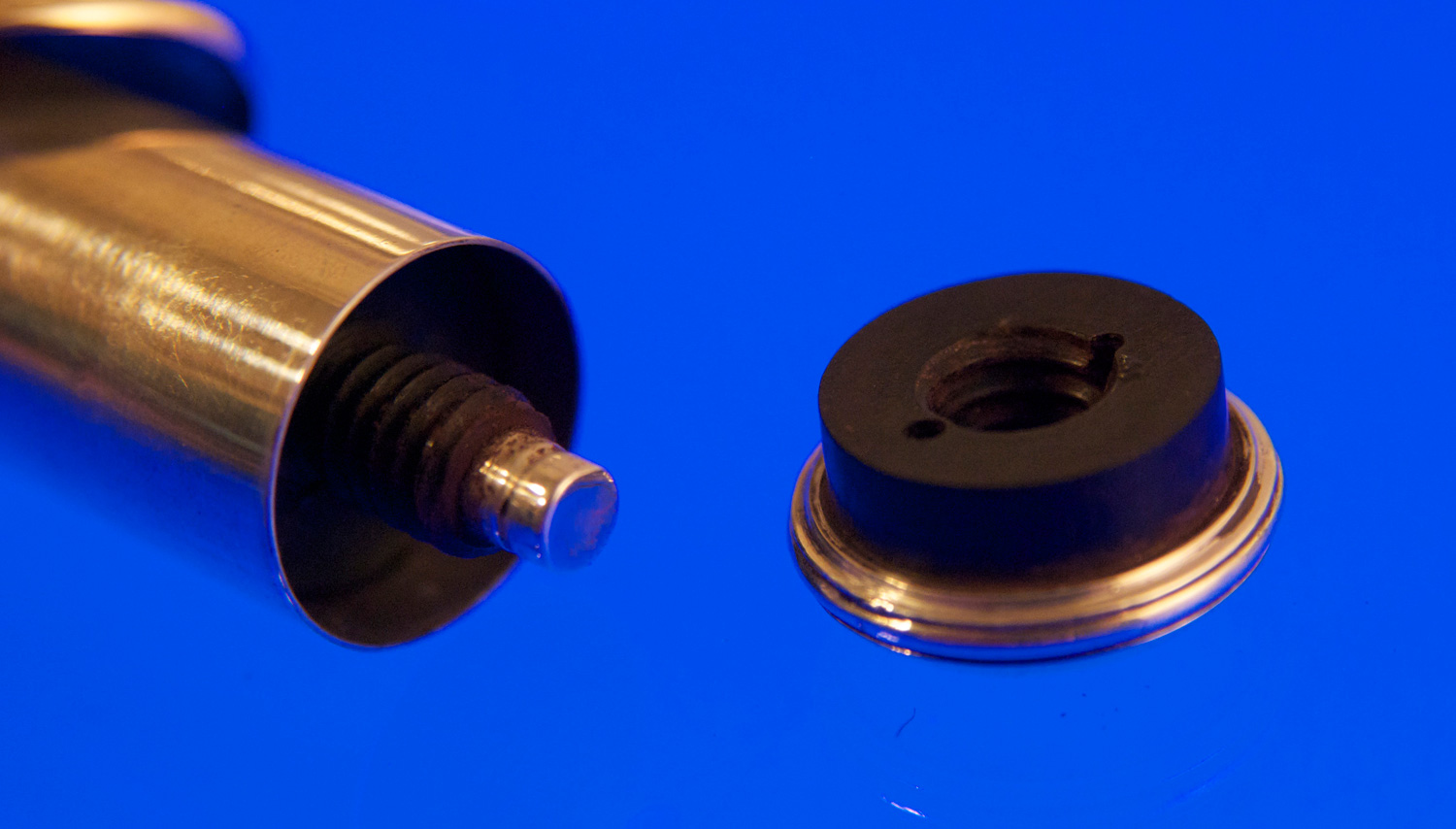 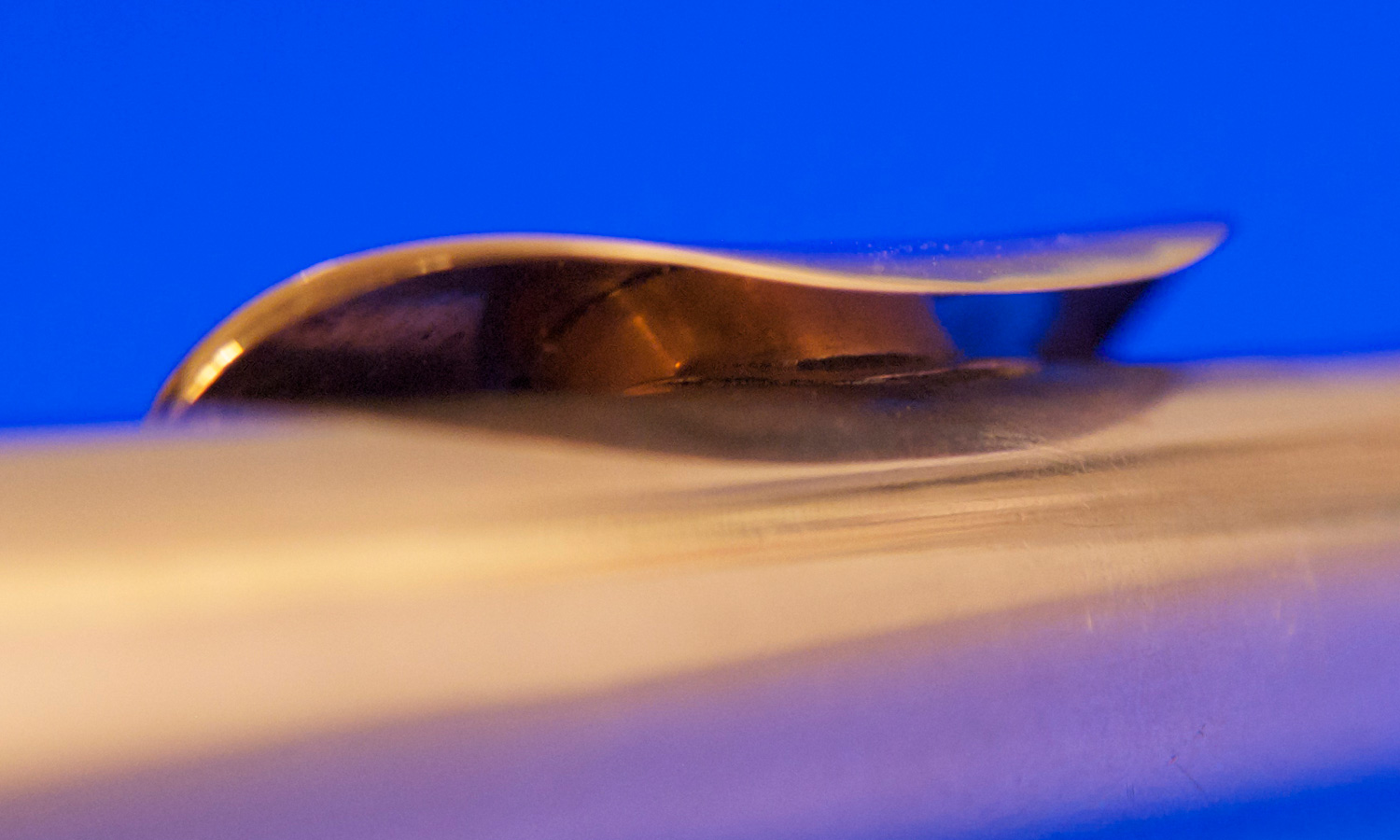 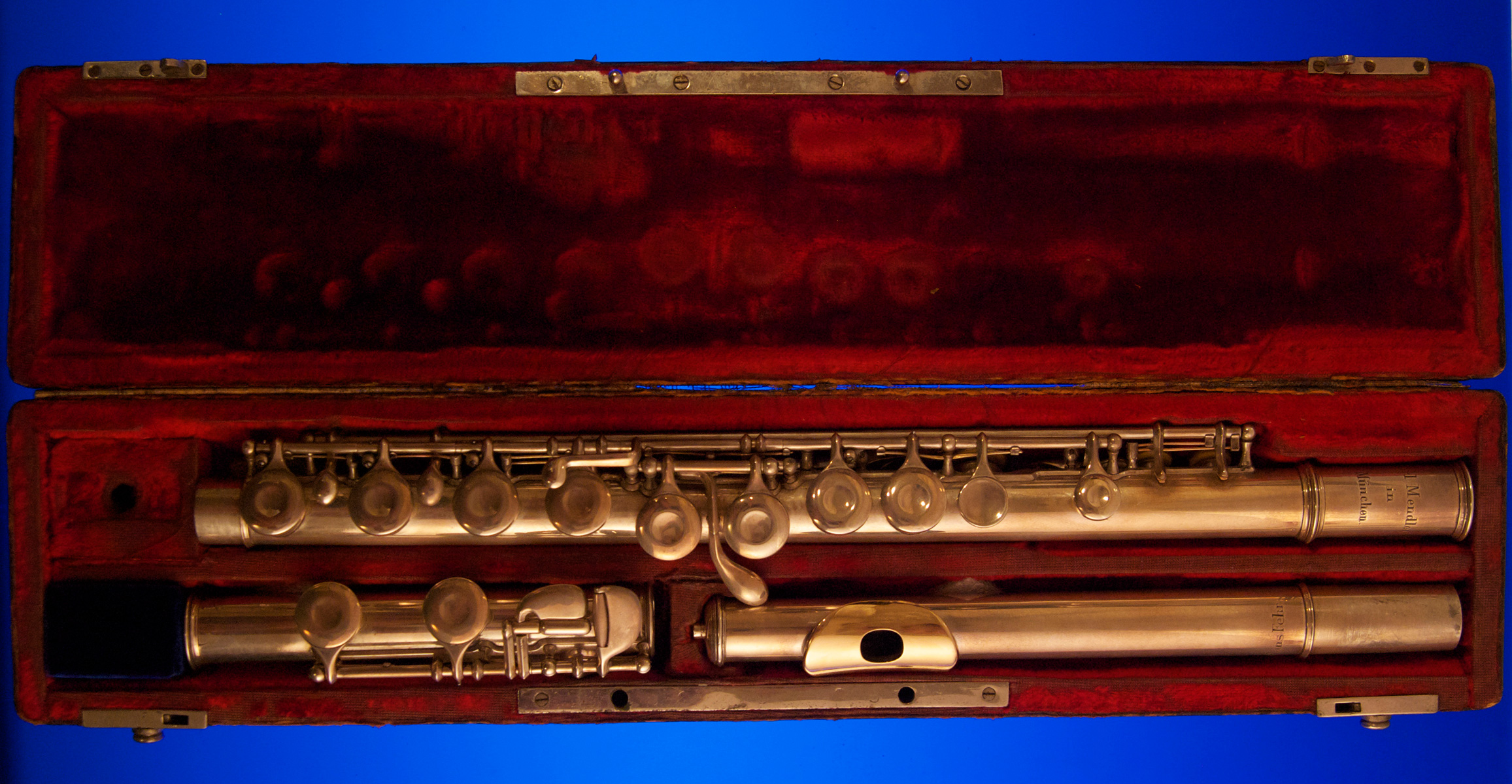 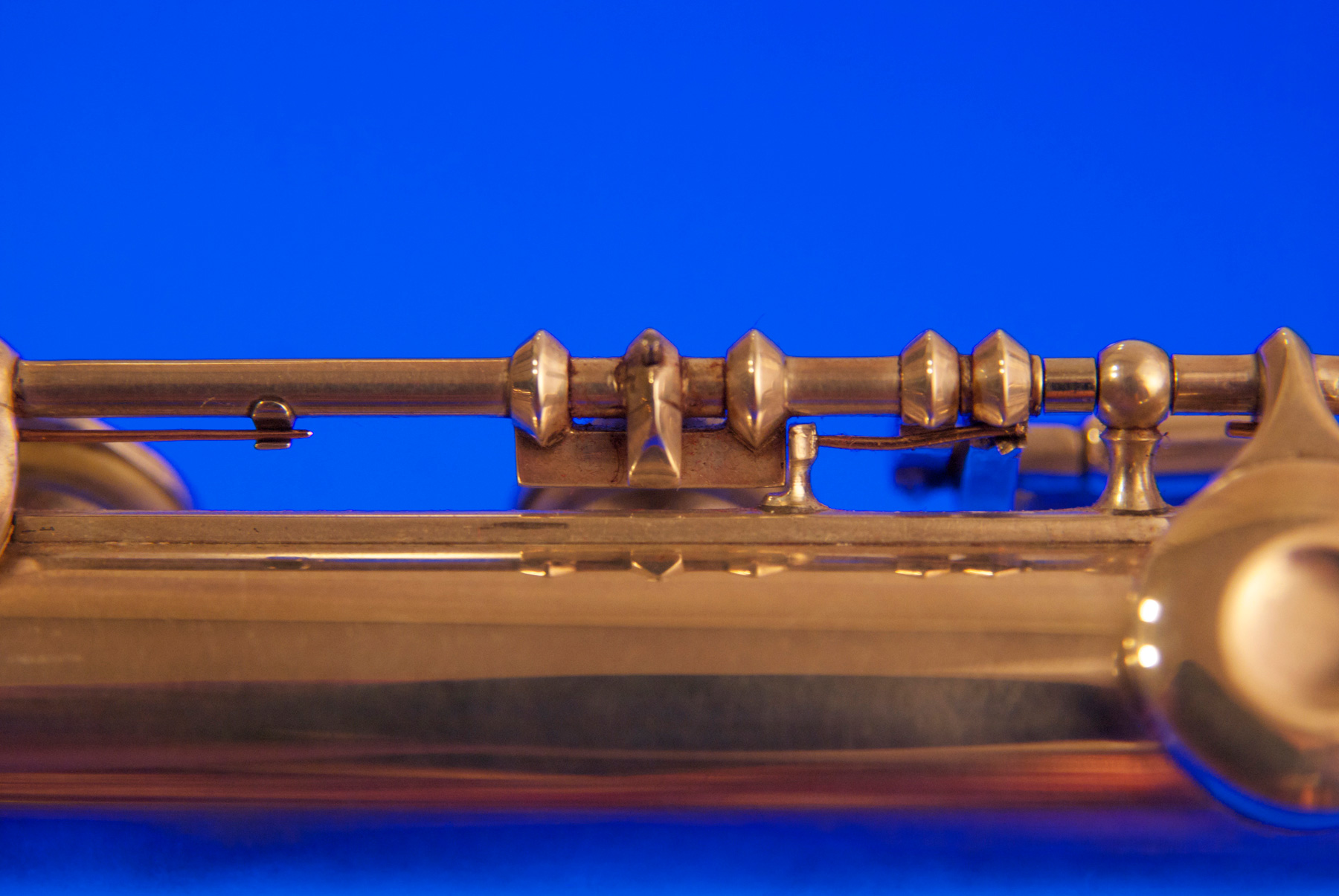 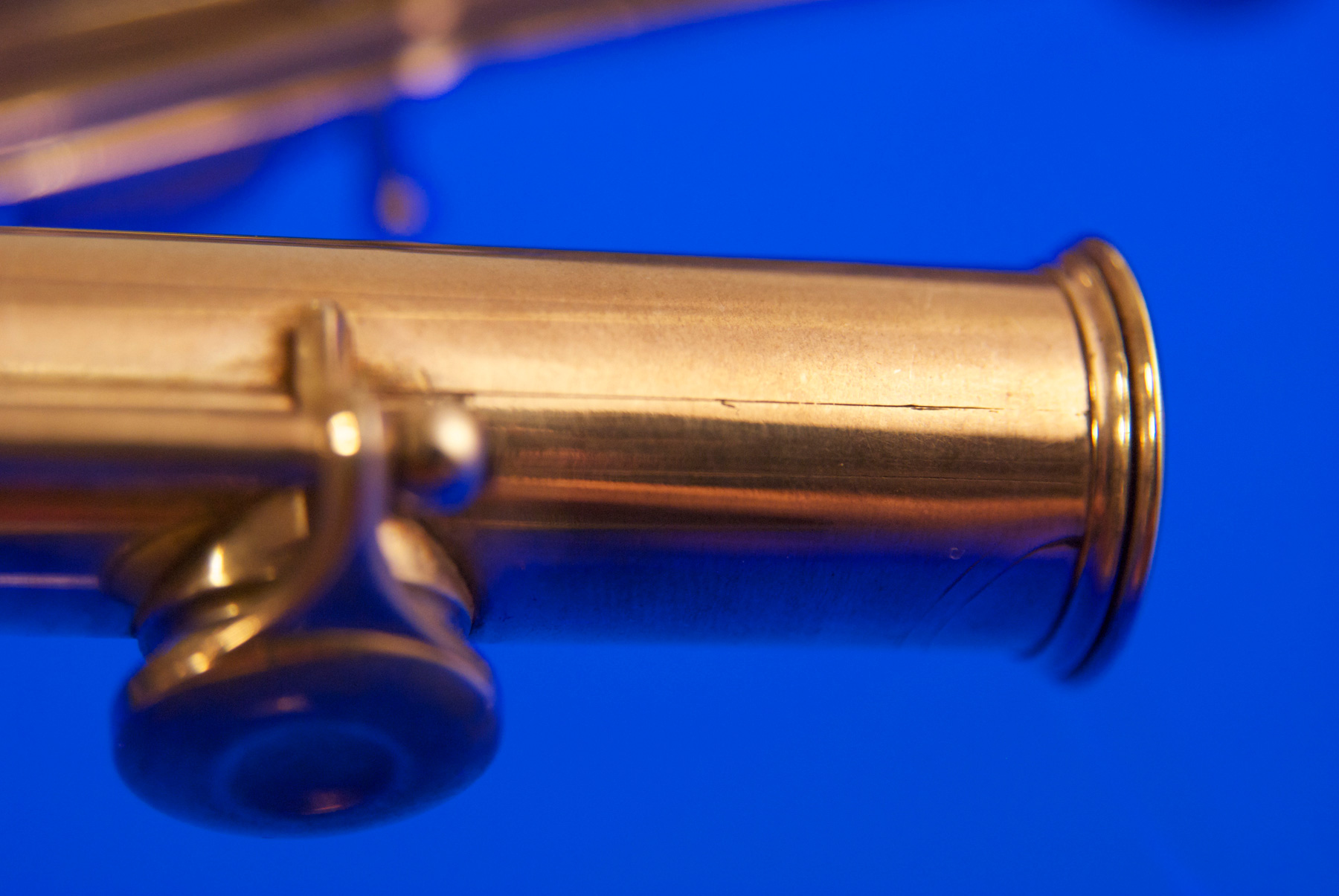 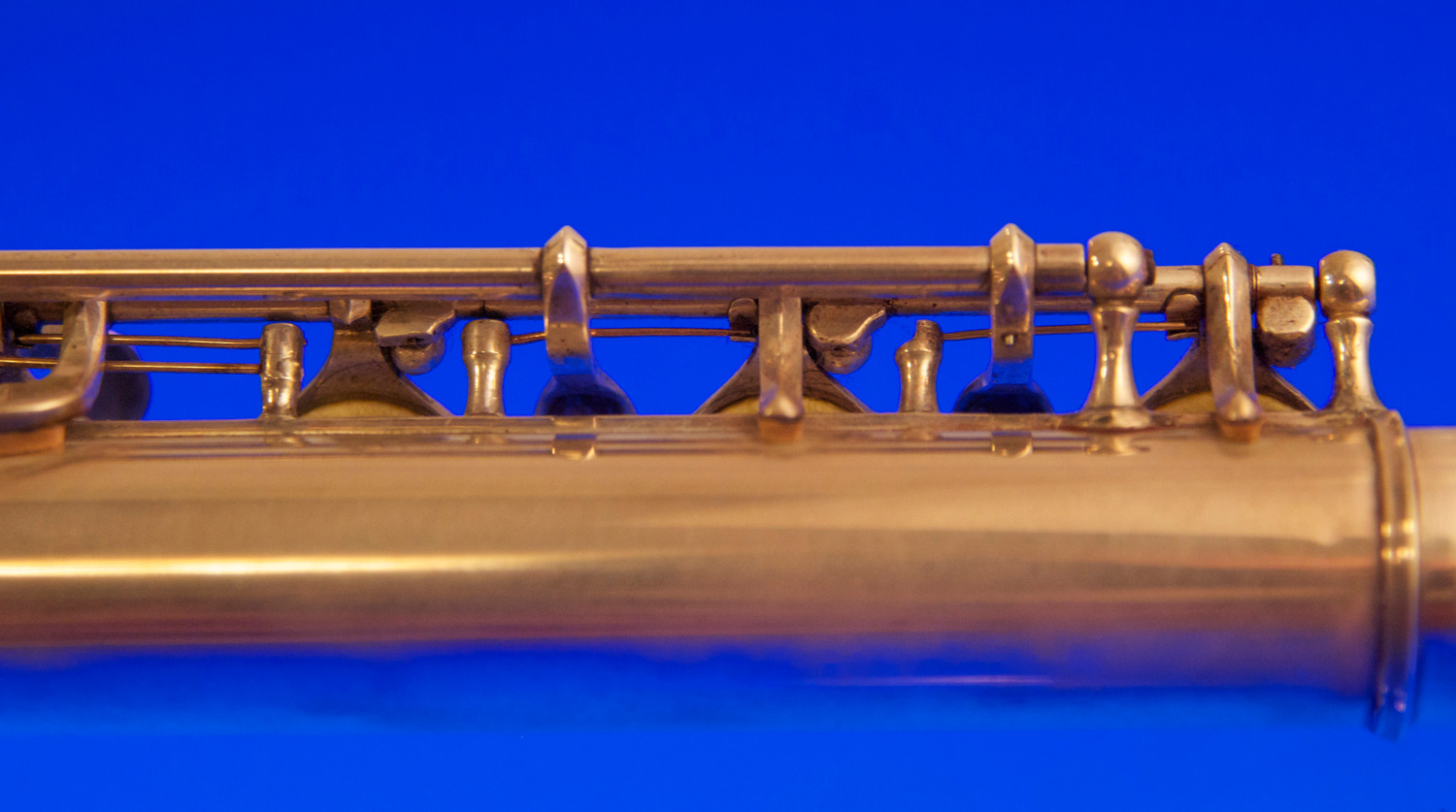 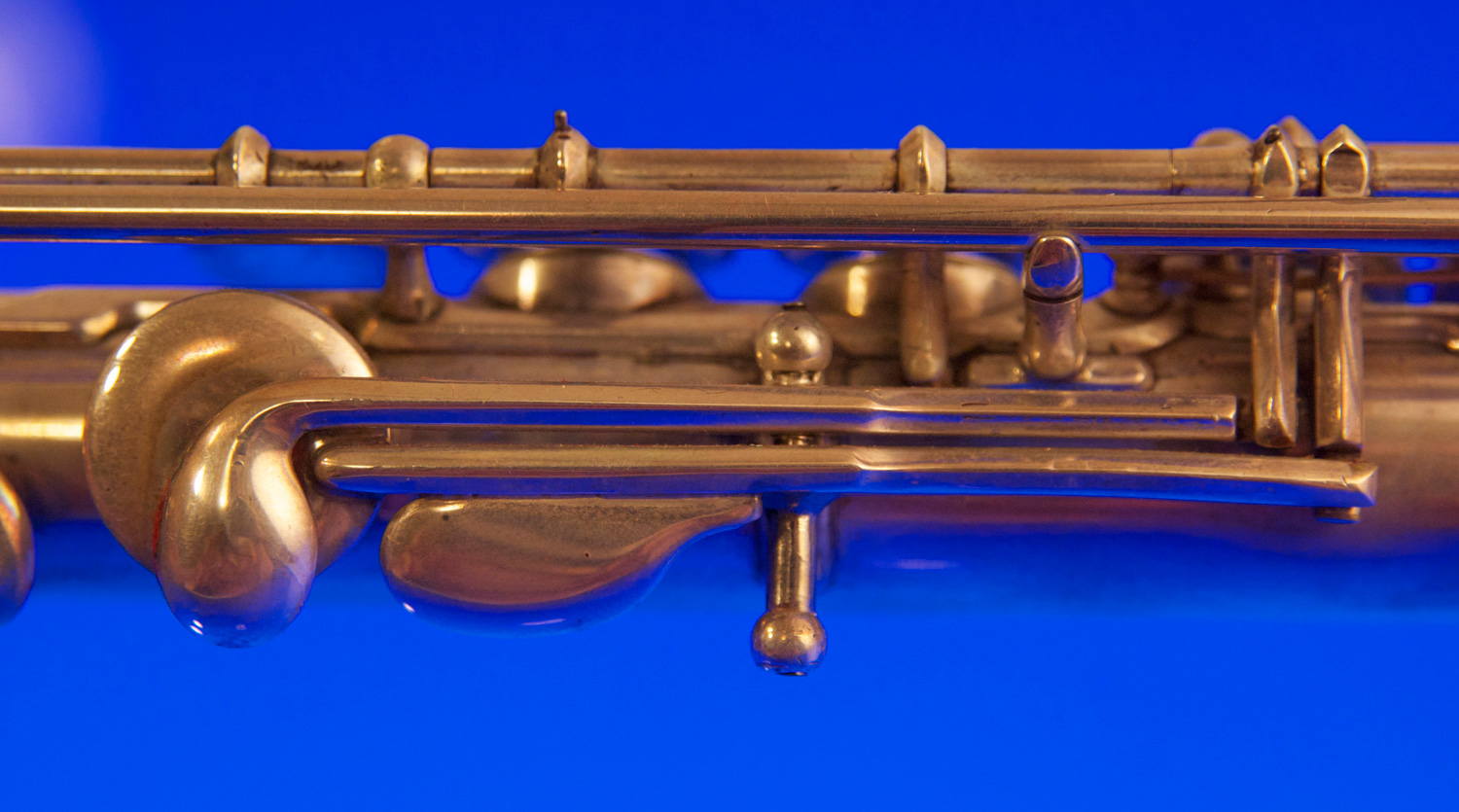 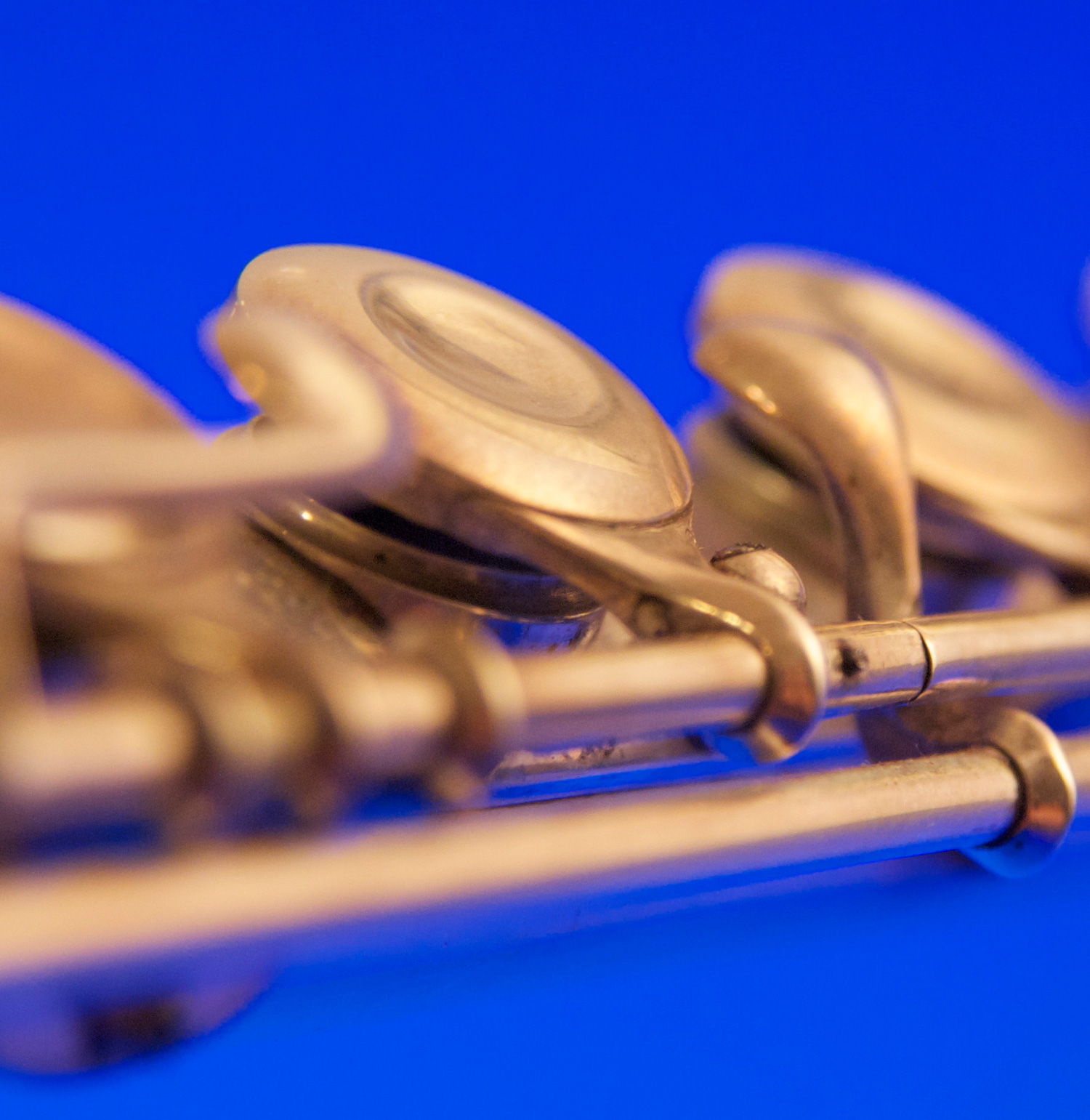 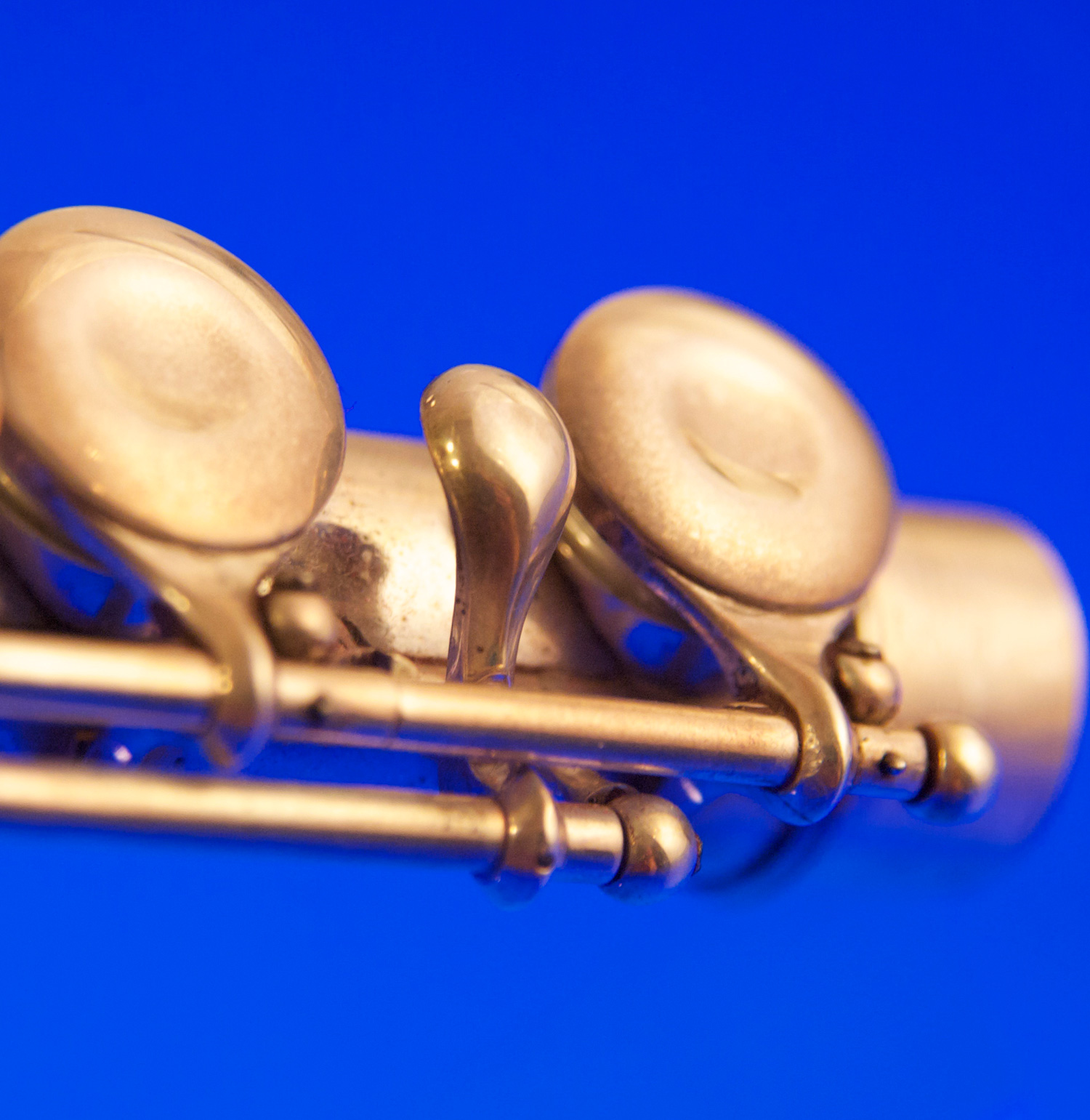 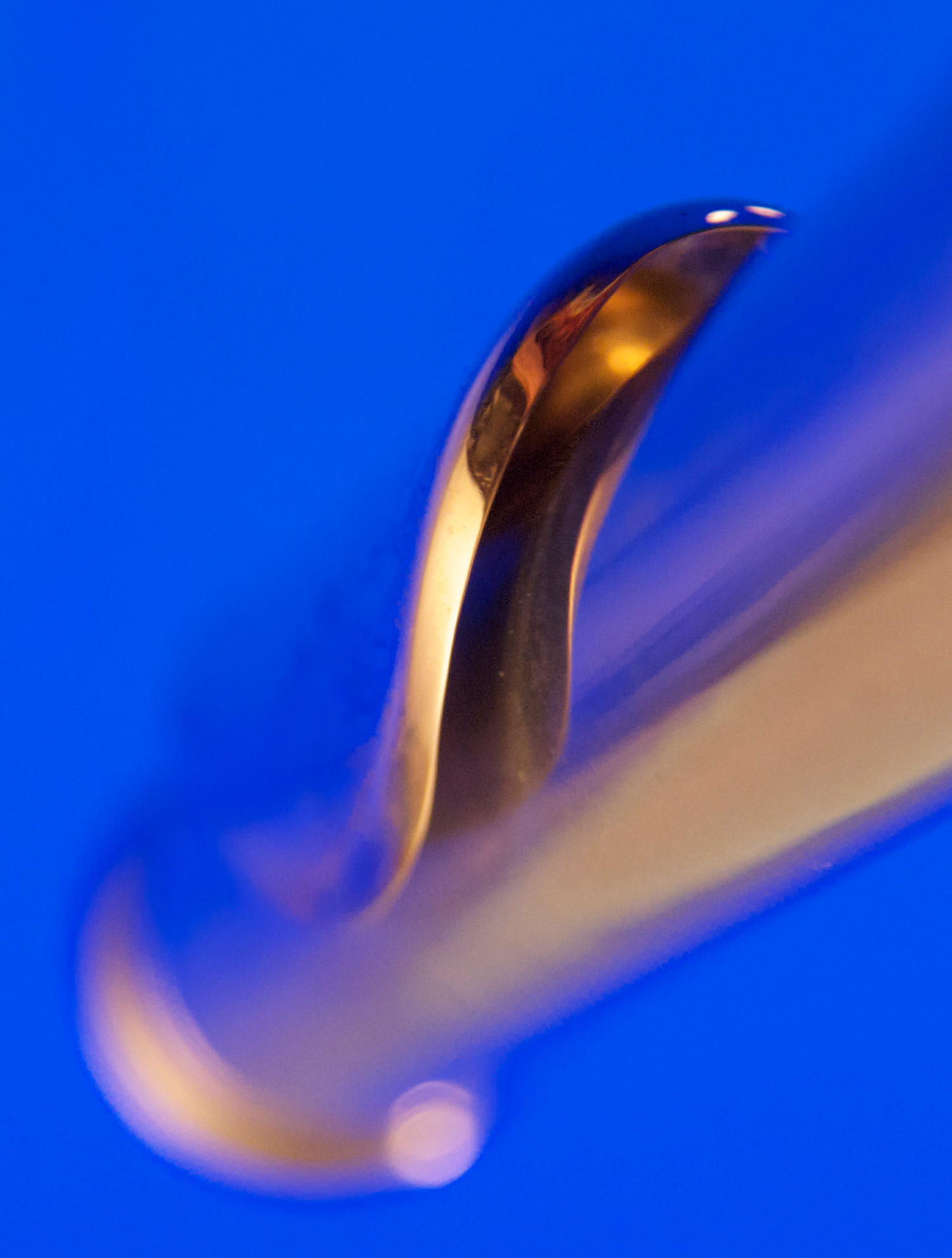 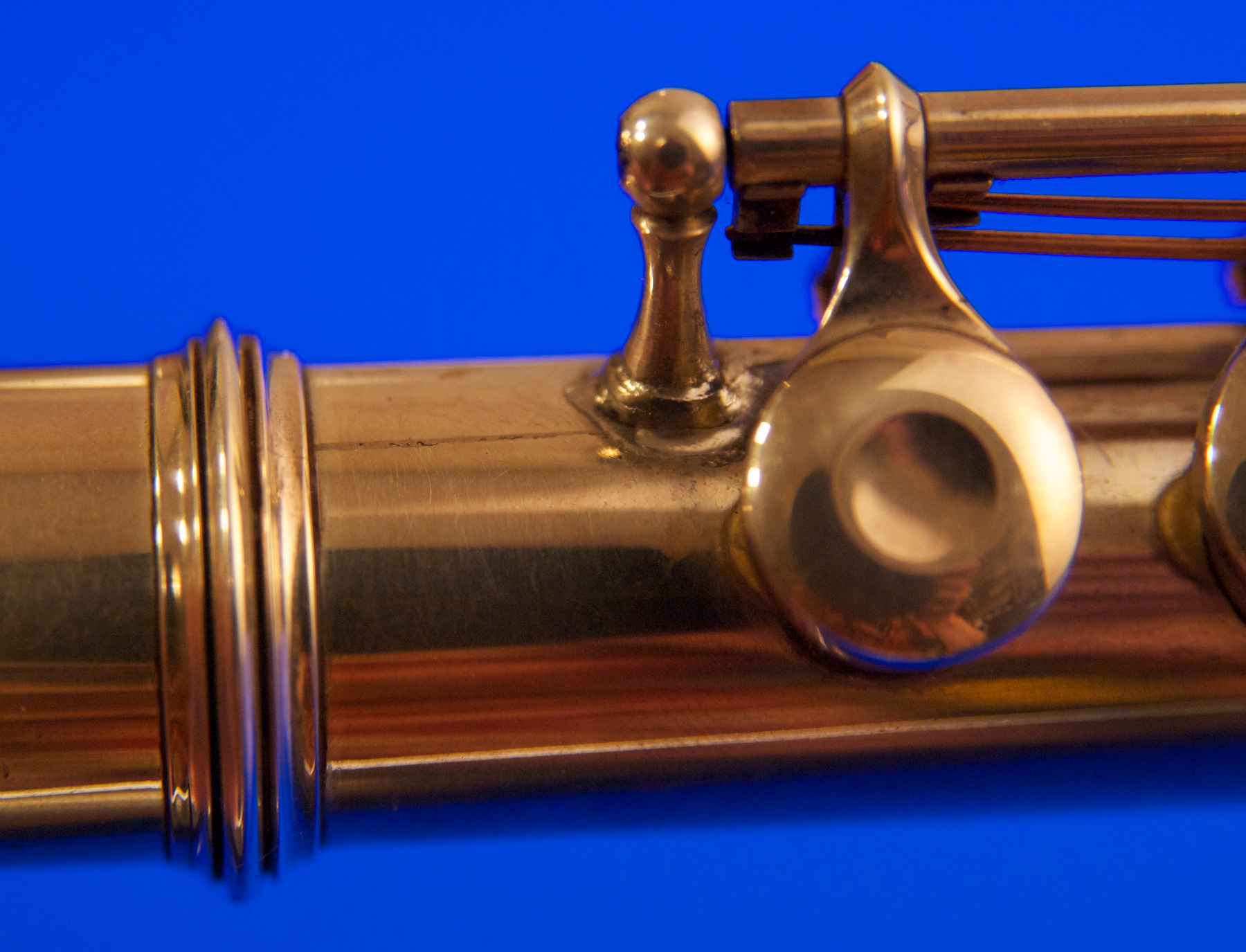 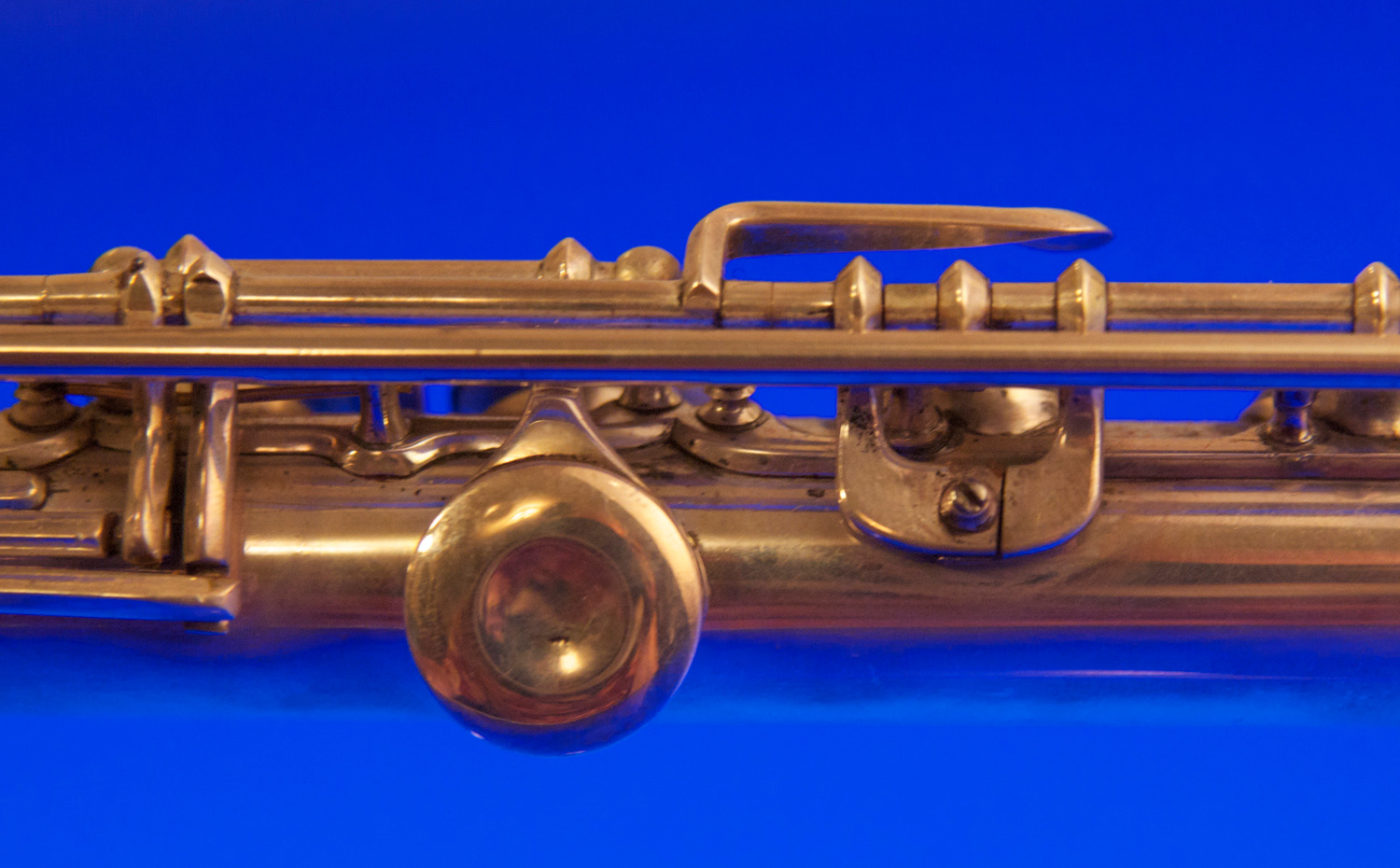 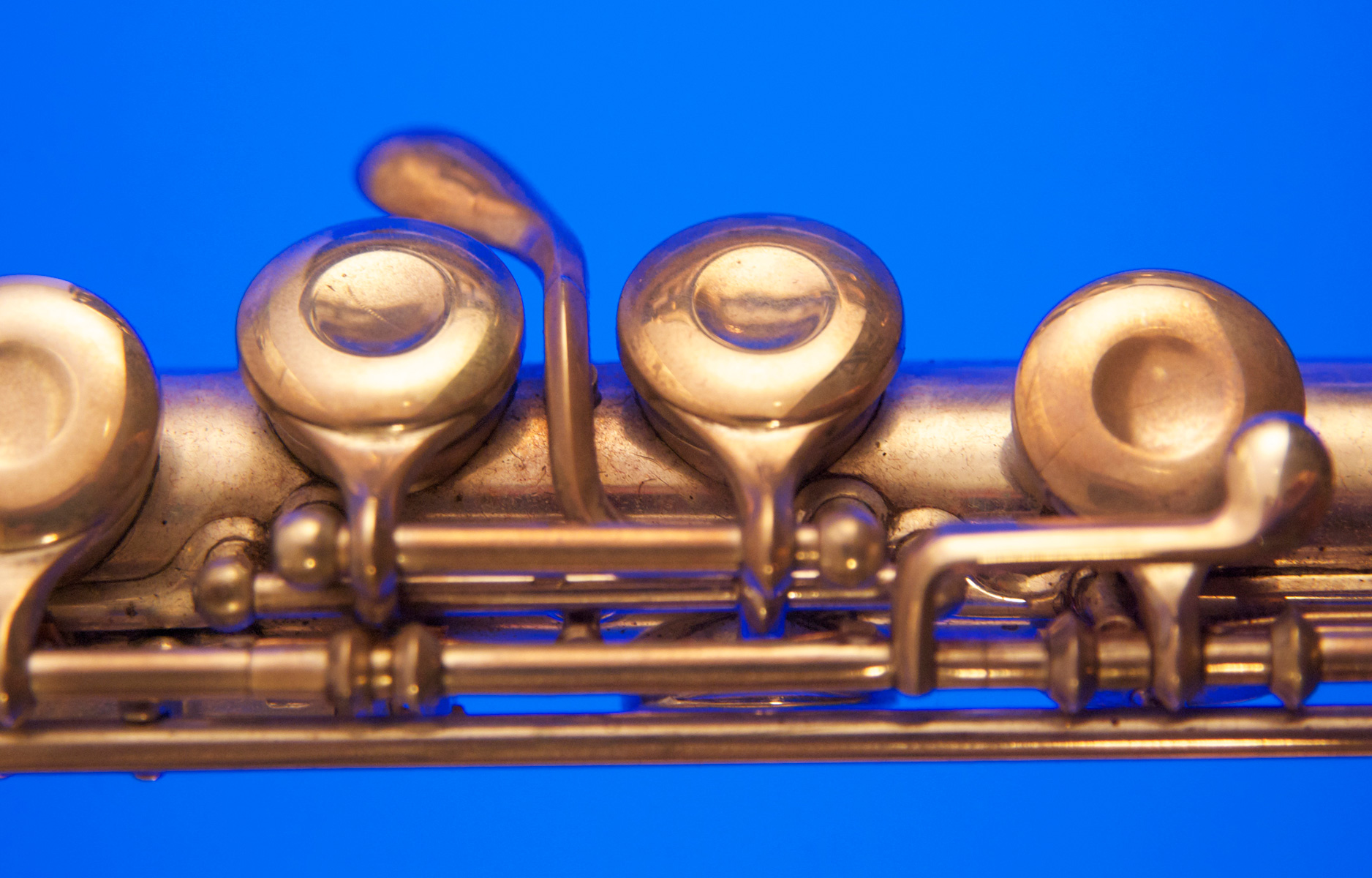