Stamp: No markings on flute.

Marks: No marks under keys.

Manufacture Date: Made in the late summer or fall of 1847; the third of three known unmarked French flutes from these crucial early days of the cylinder flute.

Comments: The story of flutemaking reaches its apogee in the development of the instrument we use today, which occurred in the Paris workshop of Louis Lot and Vincent Hypolite Godfroy. Lot and Godfroy married the bore of Boehm, the clutches of Buffet, the G# key and many other ideas of Dorus, and their own genius in design and mechanics to transform the flute into the instrument of the future. The Godfroy-Lot mechanism was adopted by other makers, starting with Rudall and Rose and eventually Boehm himself, although both these firms altered the basic mechanism with their own ideas. This flute is either Blotfroy #3 (Boehm, Lot and Godfroy), or Lotfroy flute #1 if the tube is French. This instrument was owned by Alexander Murray and studied by Arthur Benade in the 1970s. Including this flute, there are only five flutes known today which we feel are certain to have been made and finished in Paris during the first two years after Boehms patent of 1847 (using the mechanisms and the addition of the thumb Bb c.1849 as a dating technique). Three of these are unmarked. Two, marked Godfroy aide, are unnumbered. All five of these flutes are in private hands. The existing corpus of nine Godfroy model flutes marked Rudall and Rose are not included in this summary, yet they help to fill in the gaps in the development of the Godfroy -Lot mechanism. The development of the mechanism we use as the modern flute was completely finished prior to Godfroy flute #113, which we consider to have been made by 1851 at the very latest. Offered here today is the third French flute made in the summer and fall of 1847, either the first instrument with completely French tubes or made with tubes from Boehm, and likely the first instrument with the modern footjoint. With this instrument the sound of the massive investment in the cylinder flute made by Godfroy and Lot, in work and to Boehm for the rights to make these flutes, can be experienced. Hardly anyone had heard the sound of a metal flute, and the tone had to be just right. It seems likely that this instrument was intended for the English market, and that Godfroy and Lot continued making metal flutes for sale to London while experimenting with tube materials and mechanisms. Indeed, of the fourteen known cylindrical flutes marked Rudall and Rose, nine appear to have been made in Paris (some were probably strung, or finished, in London), two were made by Boehm himself, and only three seem clearly completely English. The English stamp on Boehm�s flutes show that Rudall and Rose would put their name on anything they sold, wherever it came from. Thanks to the English market, we are today able to hear the sounds that encouraged Louis Lot to continue experimenting with metal flutes, and we can hear the birth of the flute-tone loved to this day.

Material: Made of Maillechort (copper, nickel, and zinc) body and keys, with 952 ppt (parts per thousand) silver barrel covering at embouchure. Wooden barrel sandwich for embouchure wall. Springs mostly non-blue steel. Footjoint key for C padwasher has been replaced; the C# and D# washers are original. Pad washers for G# and thumb key missing. The vaulted cup pads, the G#, and the thumb pad now of cork (from a restoration in the 1970's).

System: This instrument is the Godfroy ring key, vaulted clutch system, with Boehm's horizontal open G# and a trill to the thumb key. The foot is to C, and is built with the new in-line design. As far as we can tell the modern footjoint is first seen on this flute. The trills, from the bottom, operate the thumb, D, and D# respectively, thus today's set up is the reverse of this. The screws and threaded steels are all at metric pitches, and use the same .04 pitch as the Godfroy 1832 system and silver Godfroy #811 here now as well. The headjoint taper is steeper than the tapers on the other flutes of this series (including the Rudall & Rose marked flutes), except for the Rudall & Rose in the Bate collection, which has a similar taper, and the same French screw threads (thanks to Gary Lewis for taper measurements). The footjoint tone holes are a size larger than the body tone holes. This shows that later French flutes with equal size toneholes are an intentional design, preferred over the graduated tone holes. The tube is probably either French or German. Metal tests have begun, but not enough flutes have so far been tested to present conclusive findings. We can say that the contents of the Maillechort headjoint tube on our current flute (copper 667, zinc 187, nickel 129 ppt.) closely matches the recipe used for the upper C# key on Godfroy conical ring keyed flute #751: copper 663, zinc 187, nickel 122 ppt. The French silver standard was 950 parts per thousand. Silver content over 947 was found through metal tests on: 1. Godfroy, Lot and Boehm att. (S166-Valenza): crown: 982 ppt . 2. Godfroy & Lot att. (S938-this flute described here) the barrel embouchure cover: 952 ppt. 3. Louis Lot 339 (S438-Valenza) body tube: 949.9, headjoint tube: 950, lipplate: 952 ppt. 4. Godfroy 525 (S447-Valenza): wood flute, silver crown tip: 955 ppt. It is well known that Boehm was highly skilled in manufacturing metals. It is conceivable that he brought this tube to France with him when he worked with Godfroy and Lot from late June to August. If not from Boehm, then Godfroy and Lot probably acquired the metal locally, and this would be the earliest existing completely French metal flute. As we process the patterns of these and further metal tests far more results will emerge. Today is simply safe to say that the workshop of Godfroy and Lot certainly had materials in use that match the materials used on this flute.

Condition: Other than a few post repairs, this flute is in amazingly excellent condition. The three footjoint mechanism posts have been resoldered, but not the spring post. The upper trill post on the body was bumped, very slightly denting the bore, and may have been resoldered. The pad washers on the D# and C# keys are original, all others are either replaced later or lost. The G# tail appears to be replaced, as it is shaped slightly differently and hit the vaulted clutch rod (adjusted here). Otherwise the flute is in perfect original condition.

Case: In possibly the original case, which has been recovered.

This extraordinary flute is the third French metal flute known to us, following only the two brass tube flutes with Boehm's upturned footjoint. It is possibly the earliest completely French metal flute built by Godfroy and Lot, if the tube is also French. Here we see the classic Godfroy right hand mechanism for the ring-keyed, vaulted clutch instruments.

The highly stylized tone holes for using "finger-pads". Note the substantial shaping of the tone hole rims. The trill key to the right goes to the thumb key for the B-C trill.

This very beautiful flute was built with the horizontal open G#, as used by Boehm. This key is made with the arm passing through the cup itself, the method used by Godfroy and Lot on a Godfroy flute illustrated here. 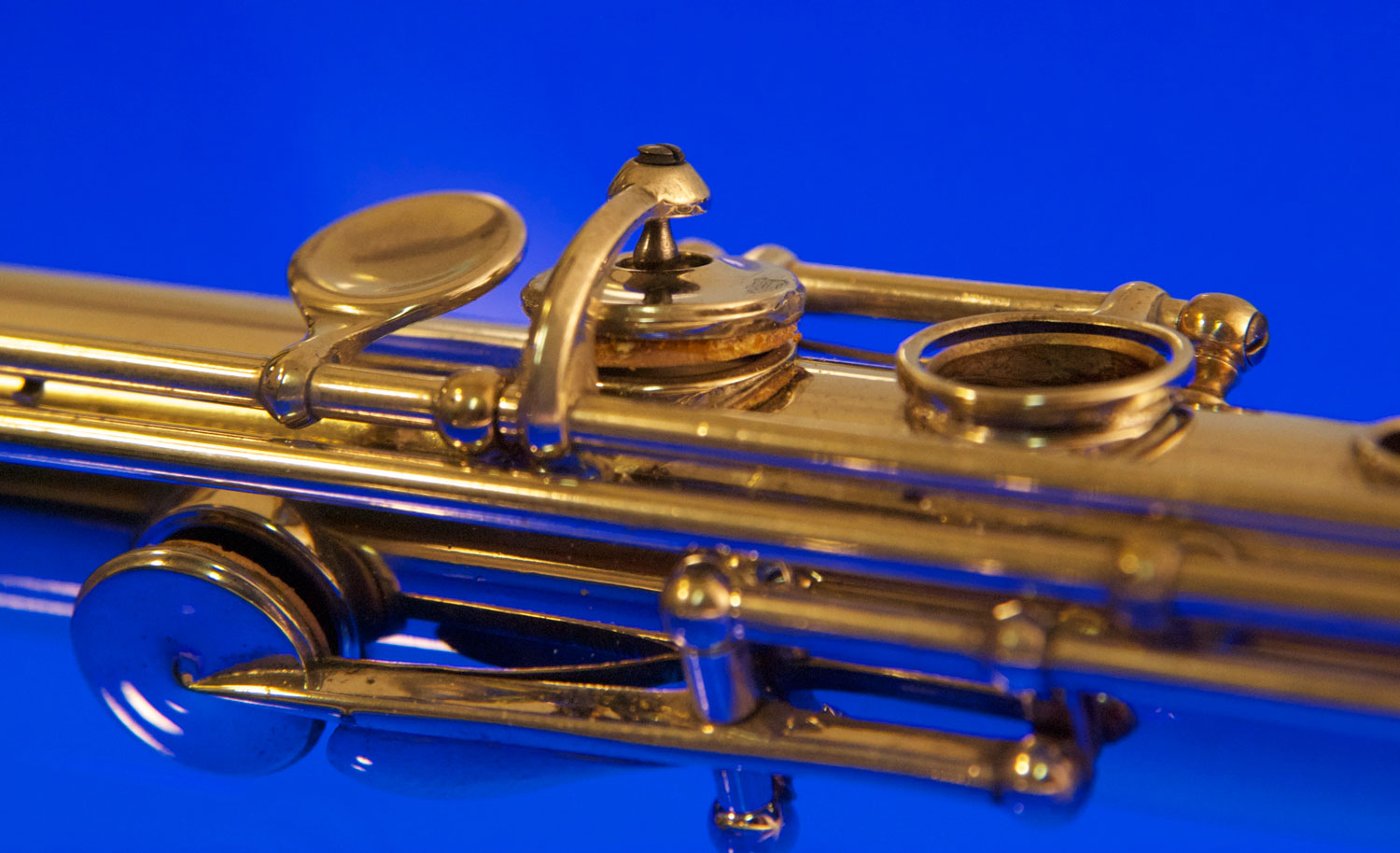 The thumb and vaulted Bb are precisely the Godfroy-Lot pattern, with interchangeable parts from Godfroy marked flutes. The workmanship on this flute is exquisite, with the gracefully raised insertion hole for the vaulted clutch, the tapered body of the upper vault, through which the teardrop plunger hangs, and the classically shaped clutch arm. 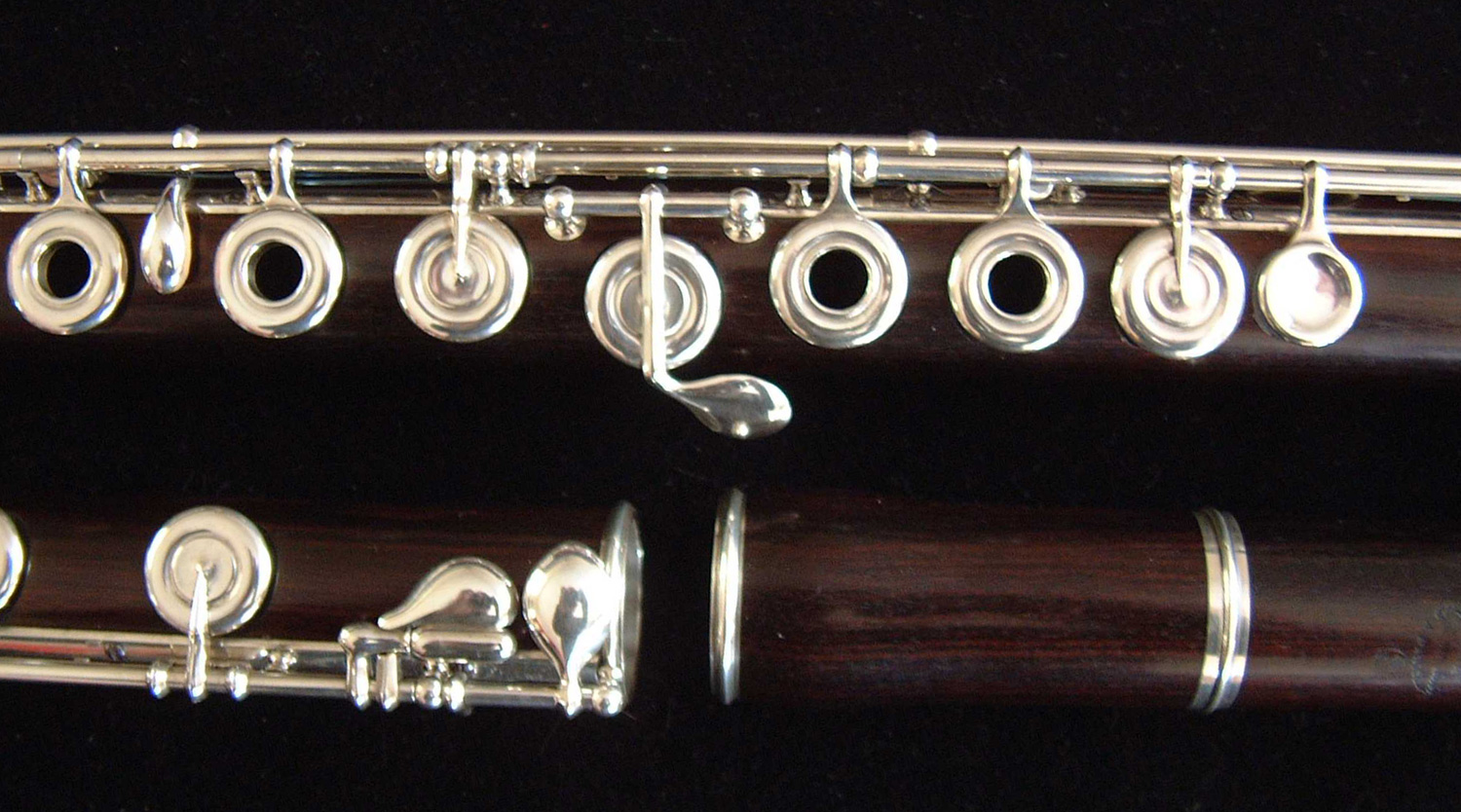 This wooden flute marked Godfroy shows the classic Godfroy-Lot shaped touch for the open G# key, and the new footjoint touches. The headjoint has a tuning slide like the British flutes, suggesting, with the open G#, that this instrument was made for the British market. The G# key is constructed in the same way as our flute here. The footjoint touches on the early Godfroy flutes are a useful means of dating these instruments. This flute is of the same era as our flute, predating the numbered Godfroy instruments which begin around #112. The rest of the keys show that the full modern system had been realized by now, well before 1851. 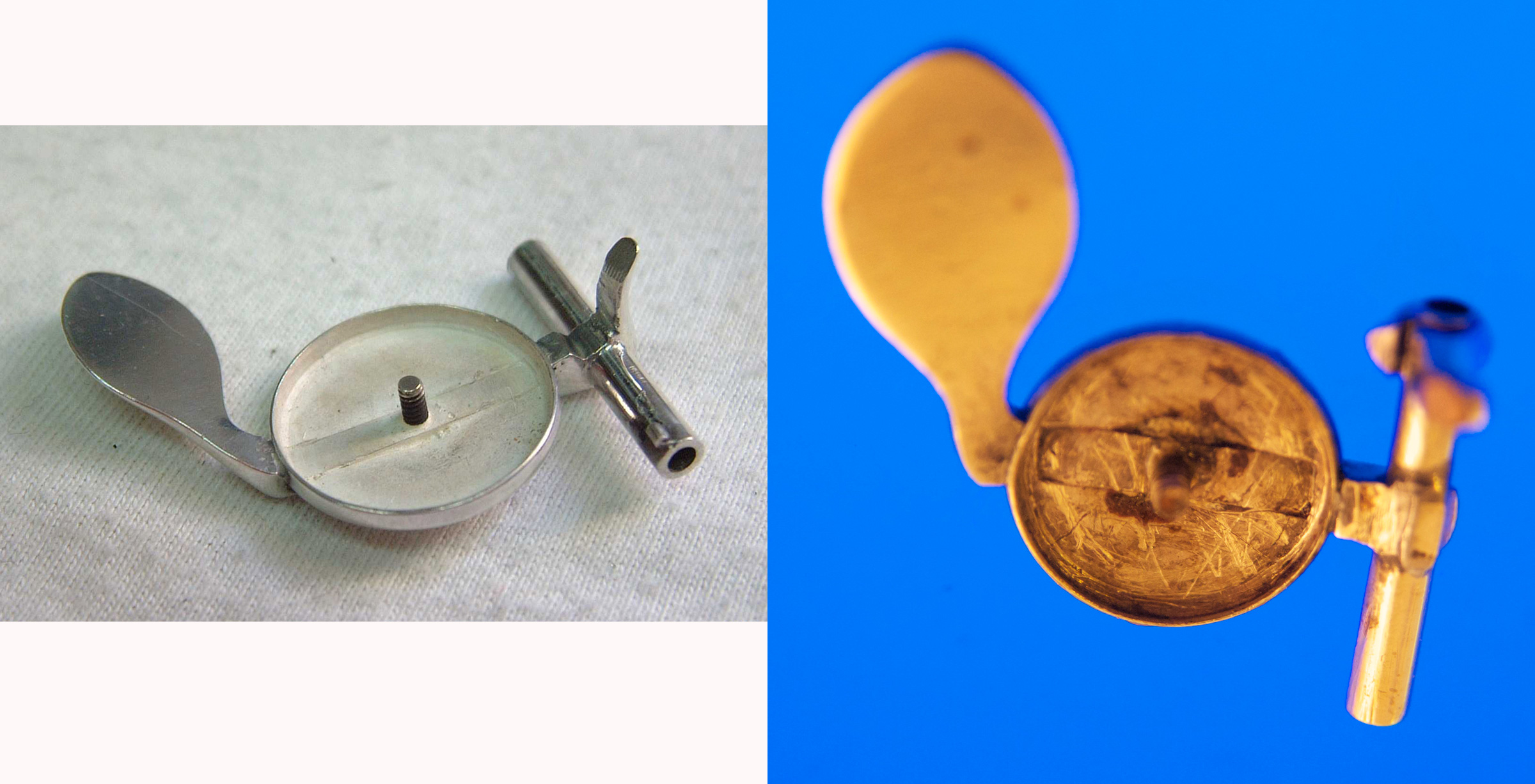 On the left we see the inside of the G# key from the wooden flute just illustrated; on the right the G# key from the flute here now. The construction and design of the two keys is practically identical, with modest differences attributable to the hand work and individuality of the keys.

The footjoint touches of this flute show incredible sophistication, considering this design is new with this flute or another made at the same time. The teardrop D# remained in use by Louis Lot and Godfroy throughout their lives, yet the design of the low C# and C touches changed in very noticeable ways. Here we have the earliest design, with the C# curving gracefully up to the right side, ending with a very small squaring off of the silver in line with the edge of the arm. The overlapping C has a rounded elbow, a tapered, round forearm, and a flair to the roller. The roller is symmetrical, without a taper at the left end. Small differences can be seen between these two flutes, including the little groove for the flared end of the C forearm cut into the C# touch on this flute, barely there on the wooden one. Lot and Godfroy developed this cut as an artistic choice. The flute on the left is this flute, the one on the right is the wooden open G# flute marked Godfroy. 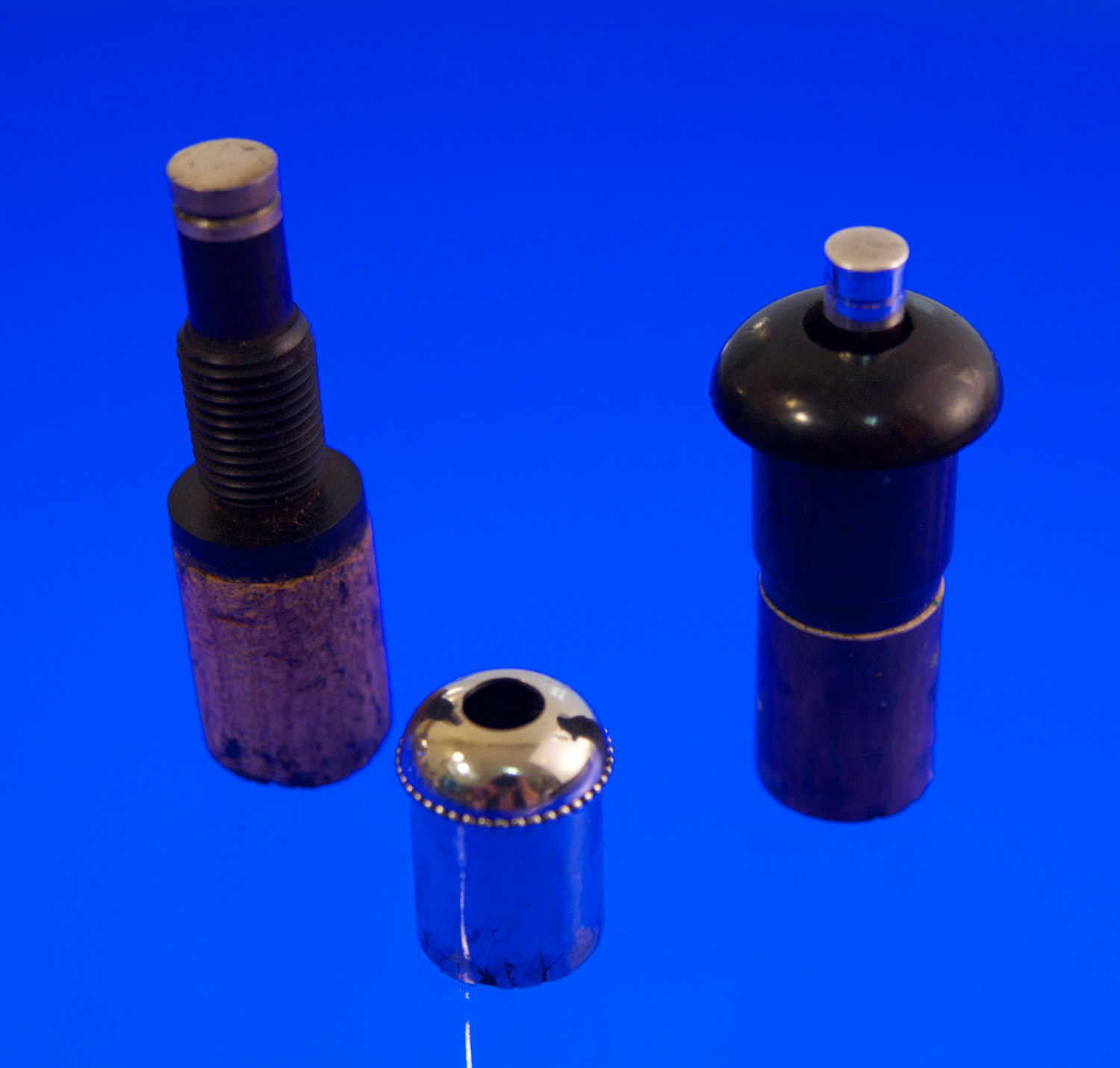 The cork on the left is from Godfroy 1832 system flute #751. The cork on the right is from this flute, with the cap of the Godfroy screwed down completely and easily. The "Lotfroy" cap is silver, and is too narrow of tip to fit the Godfroy inside completely. The threads of these two hand-cut pieces are made with the same size tool; they are just turned to different diameters. Almost all Louis Lot and Godfroy cork screws are cut with this thread, unlike every other maker. 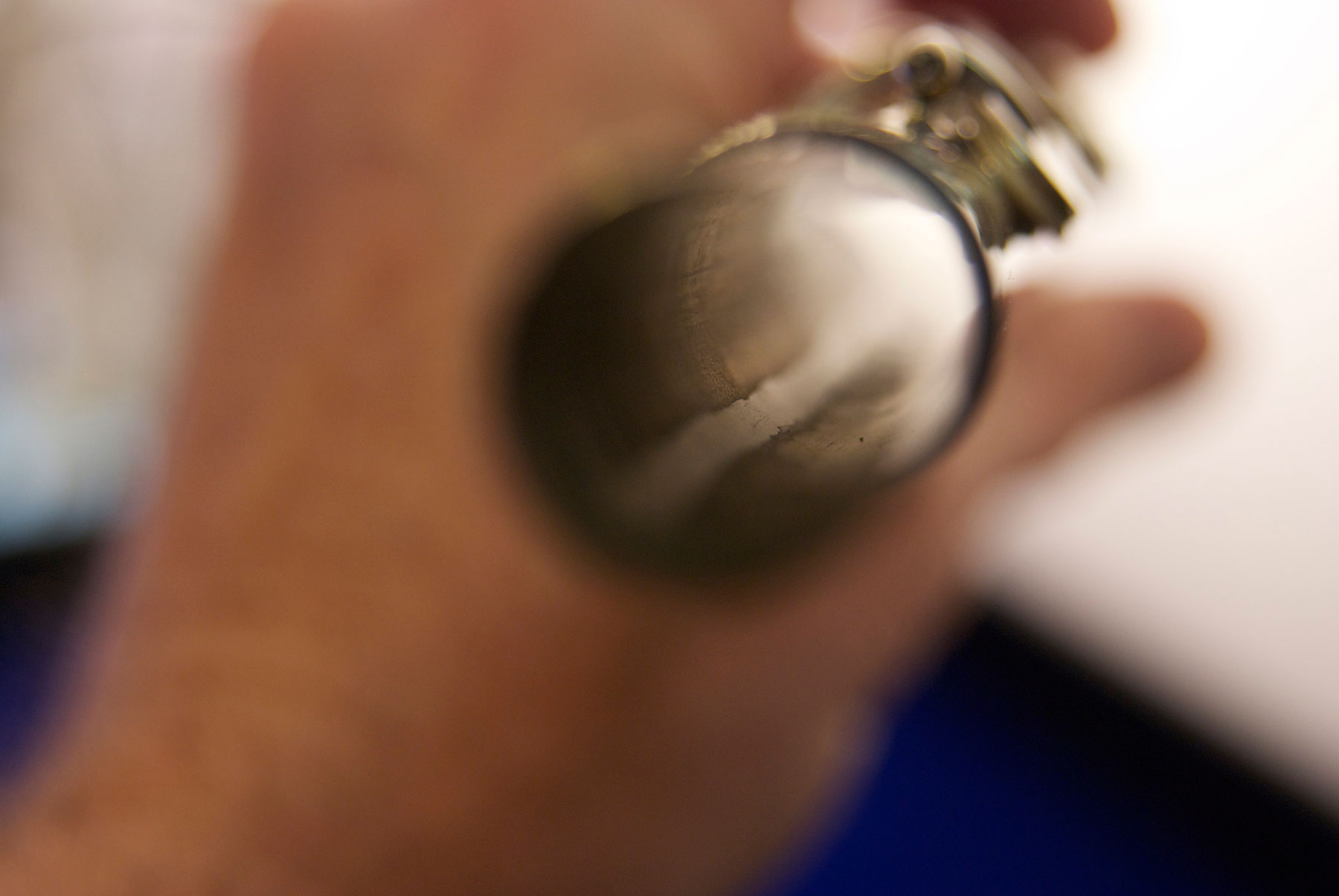 This tube was originally a flat sheet of Maillechort, or Argentan depending if it was made in Germany. The sheet was rolled around a mandrel and soldered up the seam. Here we can see the solder seam inside the body tube. Had the flute been plated we would not see this seam. 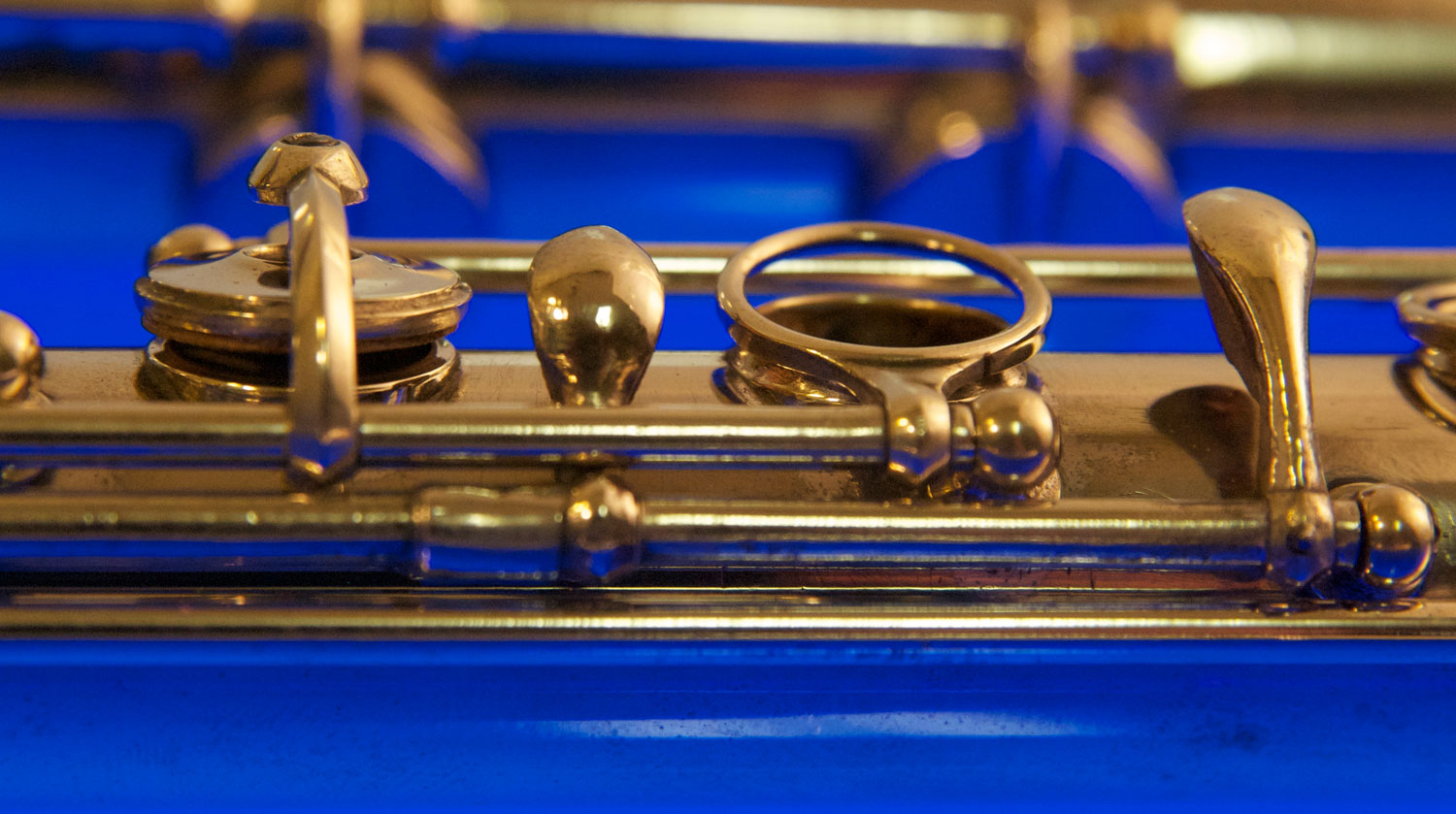 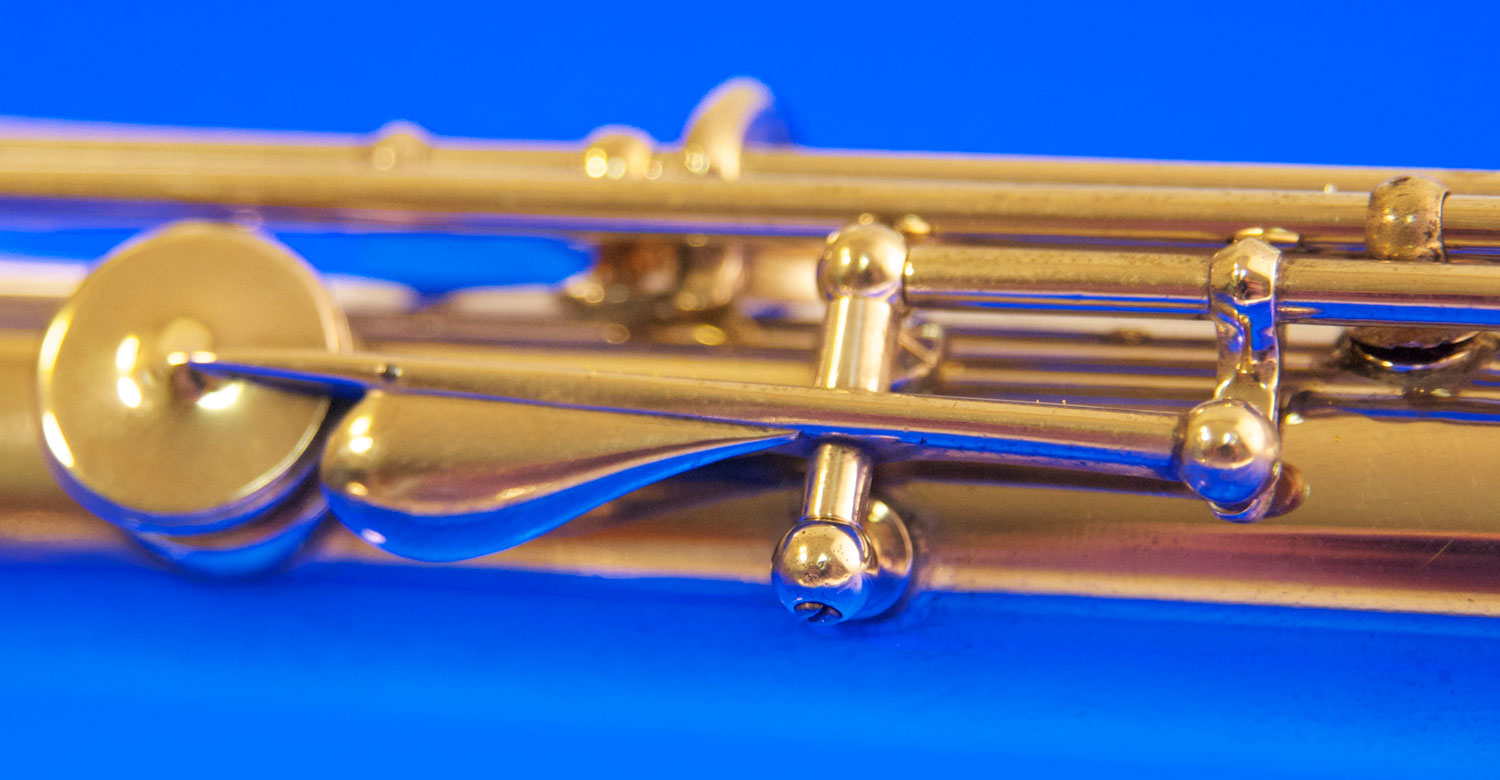 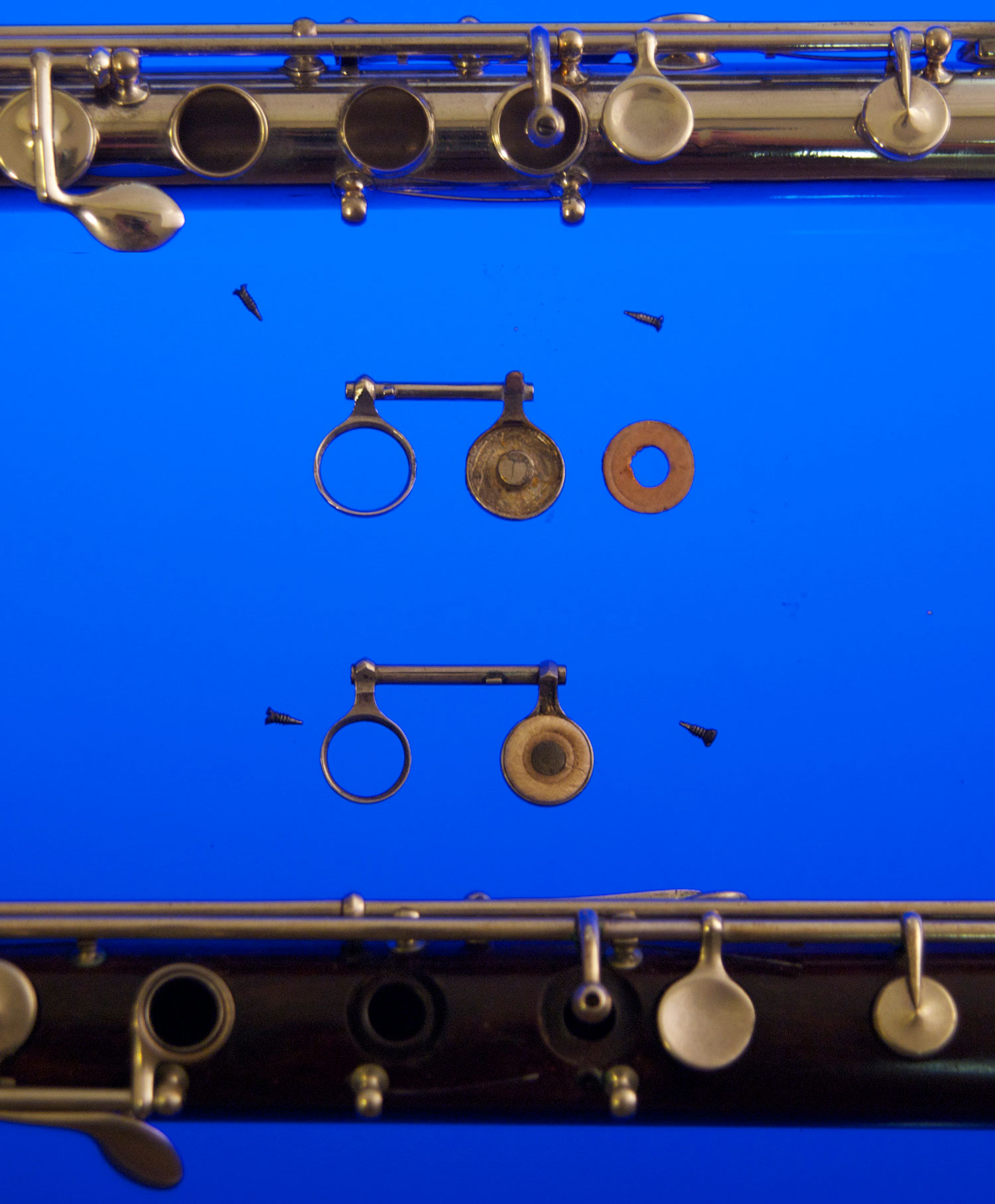 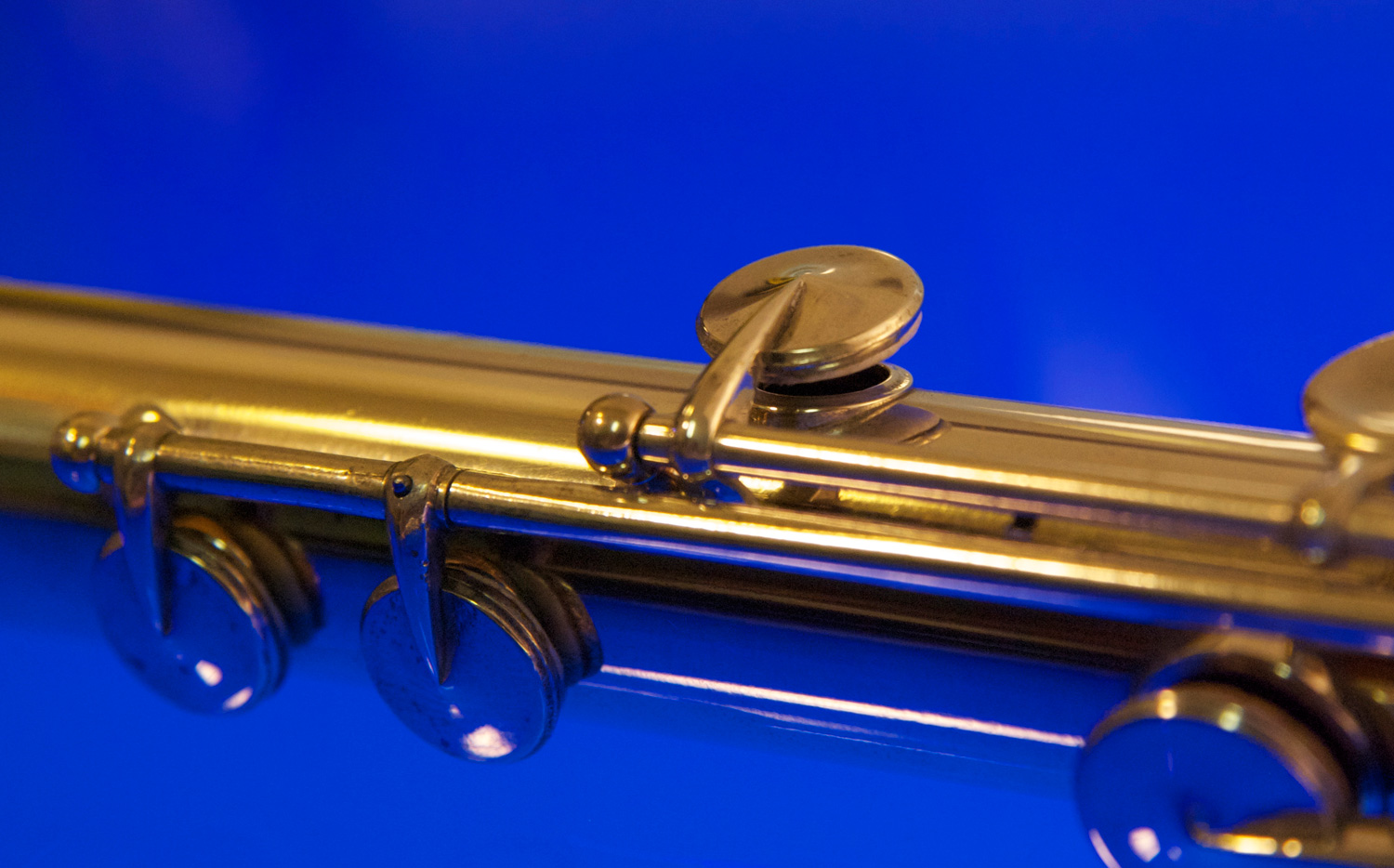