Manufacture Date: Made c. 1862-1864. This model was invented in 1862, and Clinton died in 1864. Current research on John Clinton is greatly aided by the late Karl Ventzke's introduction to the reprint of Clinton's "Code of Instructions" (ed. Rien de Reed), by the enthusiastic reporting and research of The Clinton Flute project (Andra Bohnet, Adrian Duncan, and Terry McGee, at http://www.mcgee-flutes.com/clinton.html, and www.clintonfluteproject.com), and via the always useful web site of Rick Wilson at http://www.oldflutes.com/articles/equis.htm.

Comments: It seems clear that Clinton's flutes caused a stir among flutemakers, perhaps of greater significance than his effect upon flute playing. Clinton actually patented the graduated tone holes in 1862, in spite of their having been used by Boehm earlier. Most of his fingerings and new keys had either been part of the Carte 1851 or similar systems. One early (pre-1851) Rudall & Rose silver cylinder flute, now I believe part of the Peter Spohr collection, shows similar keymaking decisions, and similar thoughts in configuration. We have long suspected that Clinton had a hand in designing this flute. The principle new invention of lasting (although forgotten) influence is the split E, claimed to have been invented by Djalma Julliot some 30 years later. Nonetheless, Clinton's success at the 1862 exhibition popularized the notion of graduated tone holes. Within a year, on 10 July, 1863, Louis Lot mentions a new footjoint with large holes for the first time. This was the beginning of the use of graduated toneholes in the Louis Lot shop. Lot had, incidentally, apparently sold a Clinton flute to an Englishman on Oct. 12, 1855, showing that he was at the very least familiar with the name, although he misspells it in the book. Clinton's other discrepancies with Boehm are the usual closed short F, G#, and thumb Bb keys from the old 8 key system, and an awkward fingering for C, via the thumb Bb key. Numerous other keys are surely useful, but escape us in their purpose. Clinton's clutches are also highly original, including the seesaw under the left-hand mechanism, and his penchant for activating the tails. This particular instrument is made with several manufacturing quirks that raise questions about the actual maker. The key-touches are finished with a flat top, yet curvaceous sides and even a slight point to the G# key. The keywork is basically French, yet modified to English taste. These are characteristics of several of the very early cylinder flutes made for Rudall & Rose, and suggest the presence at Clinton's of the same exceptionally talented maker. The hanging spring catches are cut from flat stock and effectively wrapped around the silver hinge tubes, a trick which I have seen before but never as nicely done as here. In short, it looks to us as though Clinton hired a French maker of exceptional creativity, well established in London, who had probably worked for Godfroy in Paris and Rudall and Rose in London. We see characteristics in one of the early Rudall & Rose cylindrical flutes that look as though Clinton may have worked with this same maker in the 1847-1851 days, before Carte. In fact, Clinton was sure that he had made some sort of arrangement with Boehm prior to 1847 to be the producer and promoter of Boehm's new flutes, whatever they ended up being. In the event, Clinton claims not to have liked Boehm's 1847 flute, and ceded his presumed rights to Rudall & Rose. Clinton was five years into his tenure as professor of the flute at the Royal Academy in London in 1847, thus he was one of the most prominent flute teachers in London. In Paris, the (roughly) equivalent position was then held by Tulou, who was a vocal opponent of Boehm's flutes. Clinton adopted the Boehm flute, by his own account, in 1841, two years before Rudall & Rose began their manufacture, and one year before Clinton's appointment to the Royal Academy. Thus Clinton was chosen by the Academy as a Boehm flute player! One suspects that Boehm must have been very pleased that the professor of the Royal Academy had adopted and promoted his 1832 system flute.

Material: This fascinating flute is made of silver tubes, with silver keys and lipplate. The springs are steel, and a combination of needles and flat. The original springs were not blued, and numerous replacement blued steel springs are present. The cork arrangement is currently stuck.

System: The Clinton Equisonant system champions hugely graduated tone holes and a modified key system which largely includes the 8 closed keys of the simple system along with an open keyed mechanism based on Boehm. Scholars differ over the origins of some of the ideas incorporated into this flute, such as the various ways of playing F# and F natural. Regardless, this instrument shows a very active and creative mind, as well as masterful flutemaking.

Condition: The condition of this flute is complete, and completely unrestored. Two tone hole rims are loose. The rest have been resoldered away from the workshop. The silver tube has been stained by heat from resoldering all of the rib bits and tone holes. The pads look old and English. The adjustment screws are all chewed at the top. Other than that, the flute looks completely original and unaltered.

Pitch: This flute seems pitched at A=452.

Case: In a Lafleur and Co. clarinet case. 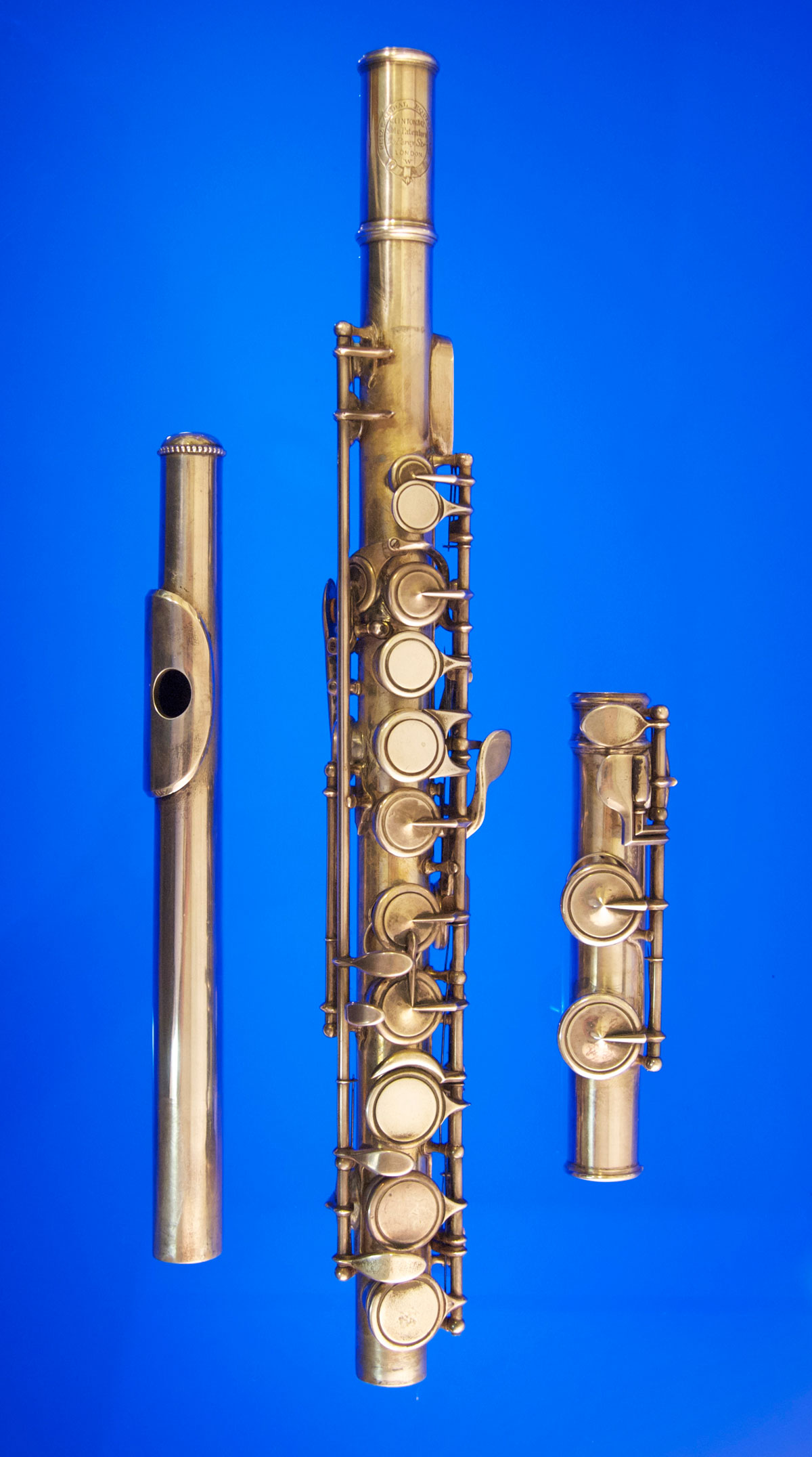 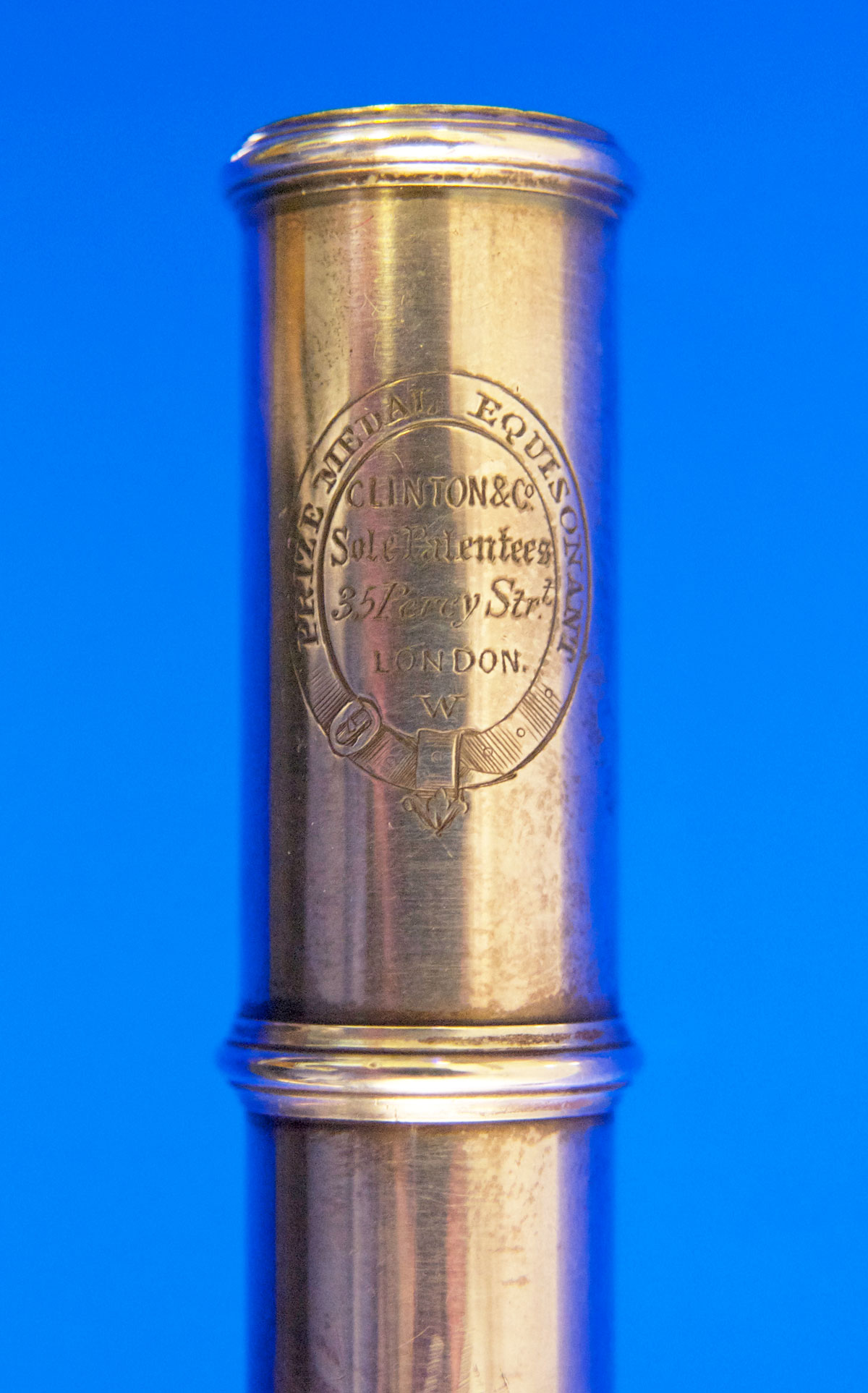 Clinton won a medal in the London 1862 World Exhibition, also represented by the Louis Lot and the Godfroy workshops from Paris, and just missed by Boehm who was sick in Munich, but who knew well Clinton's presentation. This flute was probably made between the 1862 exhibition and Clinton's death two years later. 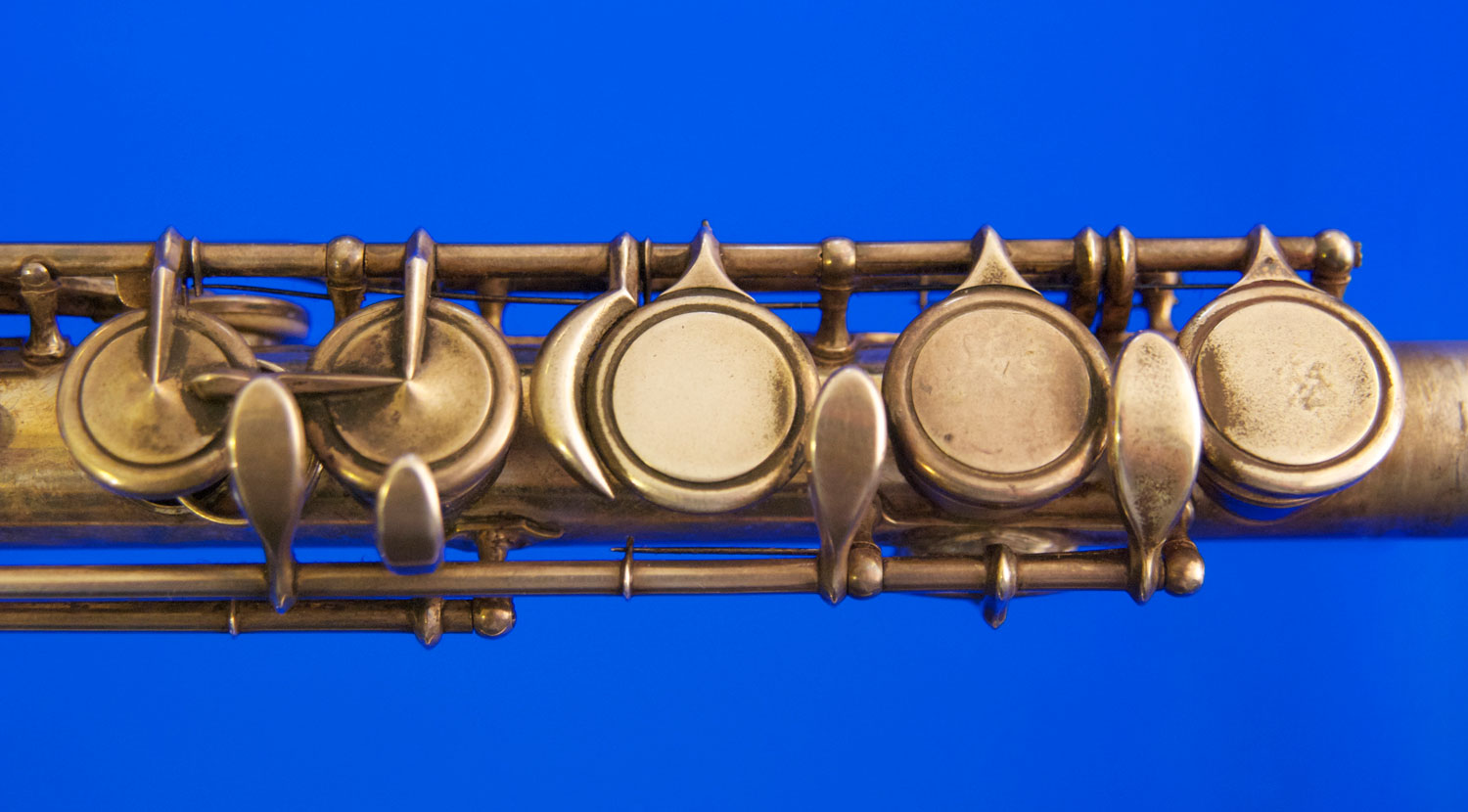 The right hand uses the side short F and the first finger F#, with a crescent touch for F natural. The split E is beautifully made as another French arm which extends over the G# vent, made independent via Clinton's special tail clutch.

This is the rear of the right hand. The double screws and the single screw just to the right of the single tonehole (F#)are all pinned the the steel and close the cup, giving F natural three different ways. 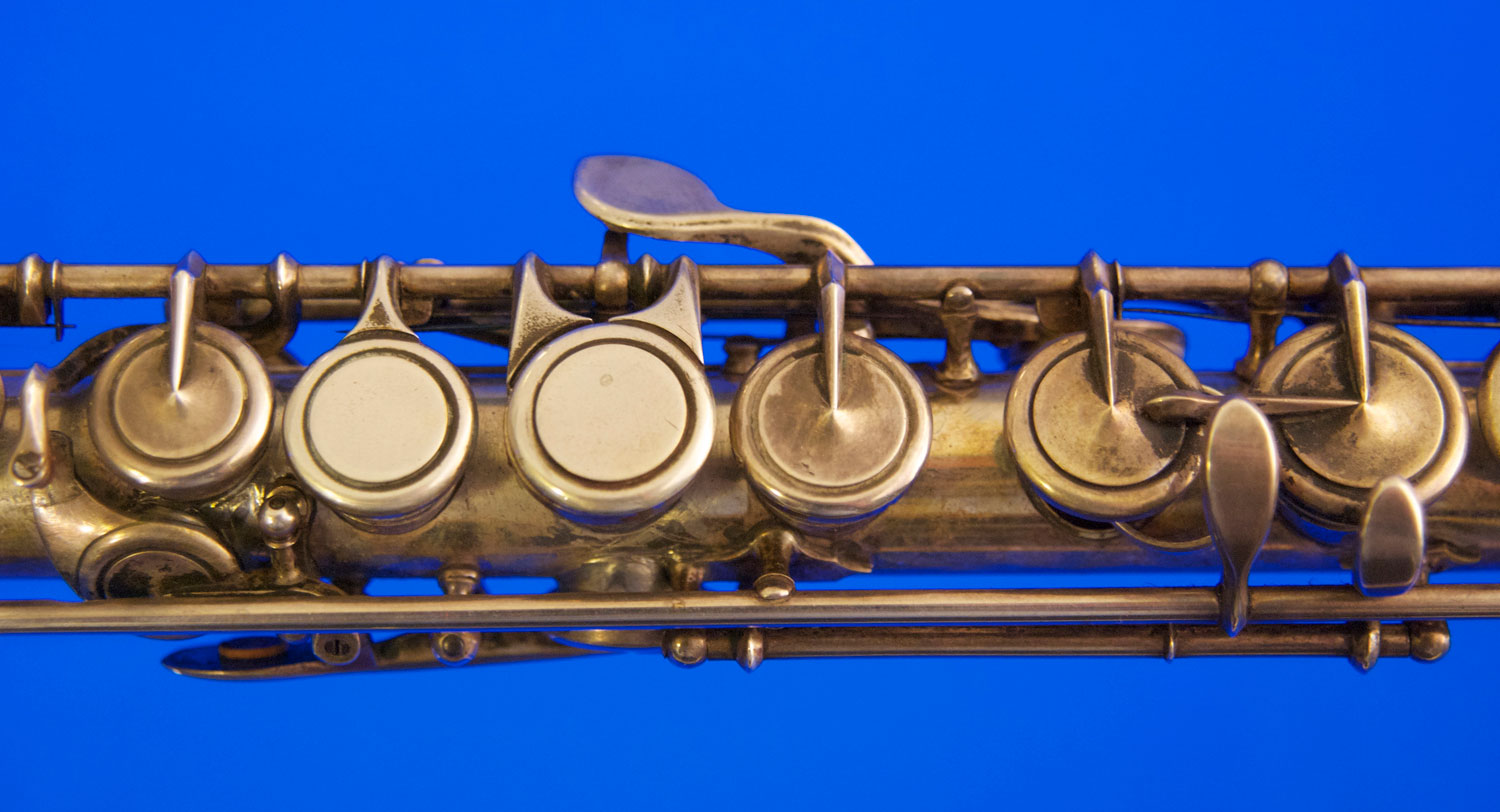 This flute is a skillfully made and designed instrument. The shaping of the keys is actually very similar to the work of one of the original workers at Rudall & Rose, who made some of the variations to Boehm's system before 1850. Note the flat tops to the otherwise sculpted keys, and the gracefully pointed G# touch. These are variations on the keymaking of Lot and Godfroy, and suggest to us that one of their workman came to London to help with the cylinder flutes.

The exceptional fingerings in the left hand are legion, and include a double clutched C, visible under the rod for the trill keys. This key is sprung open, and closed by the Bb thumb key or the A key. Rick Wilson has a lovely discussion of this key on an earlier Equisonant flute here: http://www.oldflutes.com/articles/equis.htm. 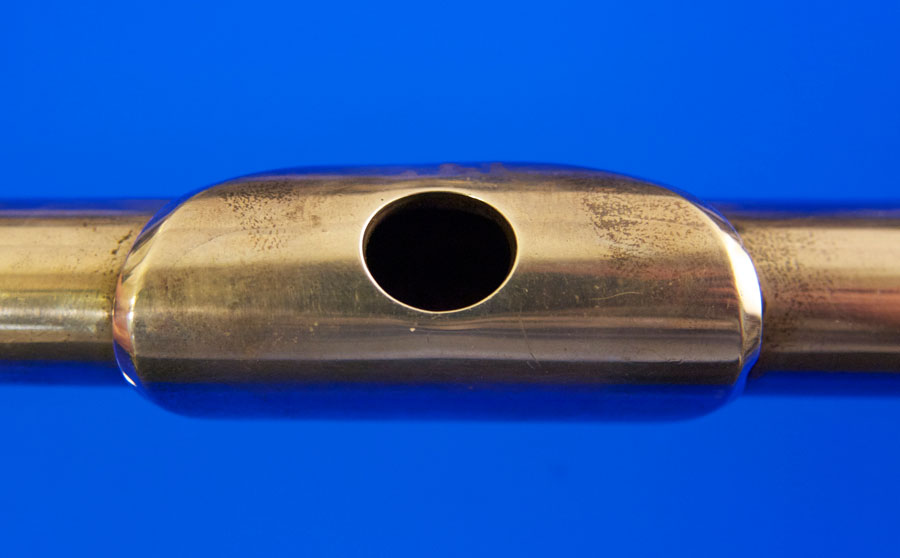 The embouchure is very beautifully made, with a gentle chamfer inside at the tube and very nicely made walls. The plate is very generous for the lip and short for the breath. The flange and chimney are very nicely made. This plate has not been removed or altered in any way.

Here we see the audience side of the flute. The pad cups cover the F# hole, the G# hole and the B hole. This mechanism is fantastic in conception and exquisite in execution. Although very worn from use and poor repair attempts, nonetheless the quality and intent remain. 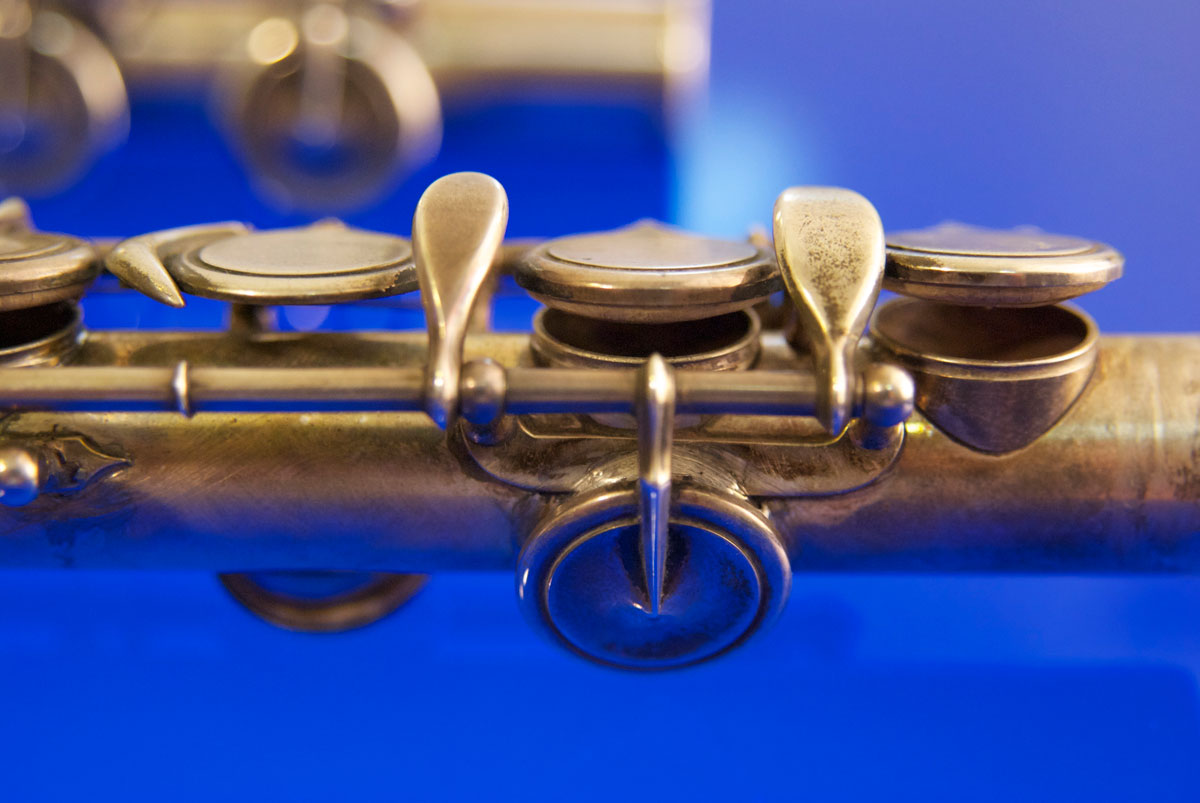 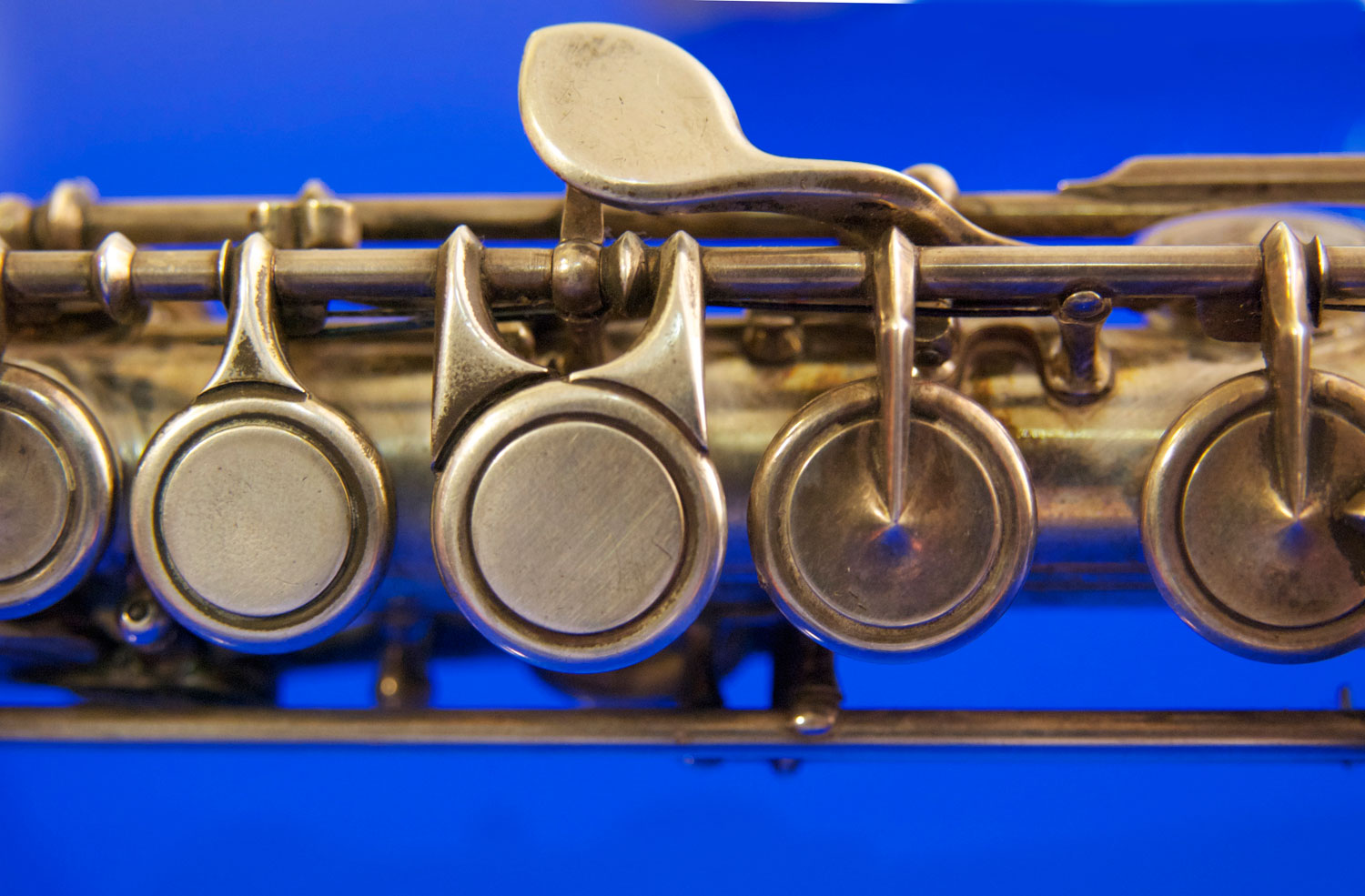 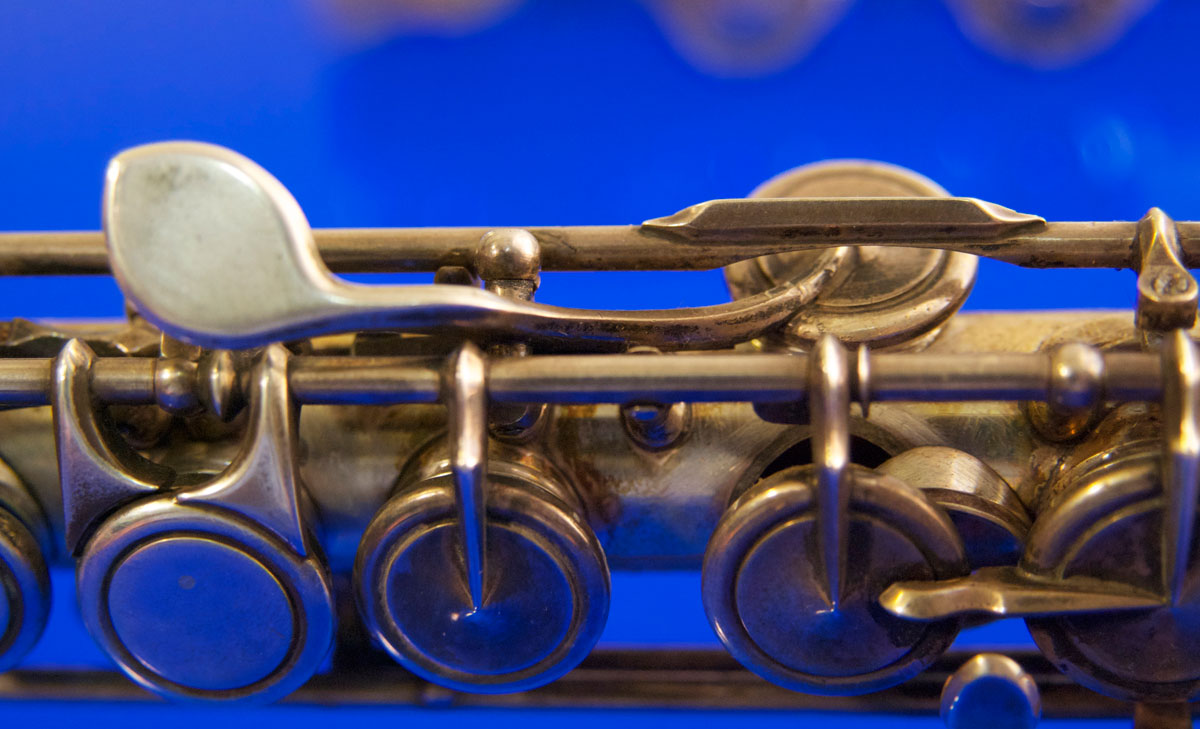 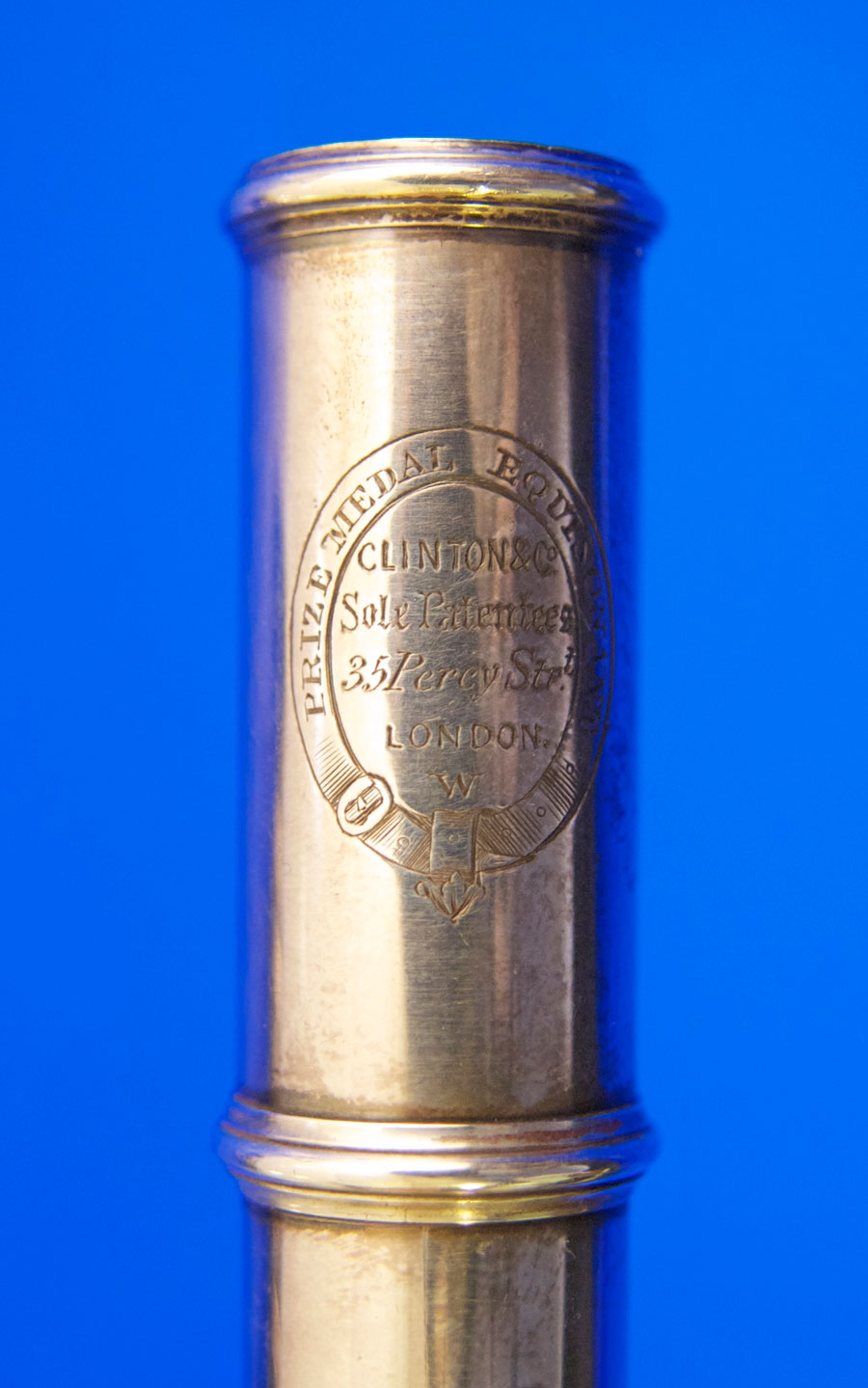 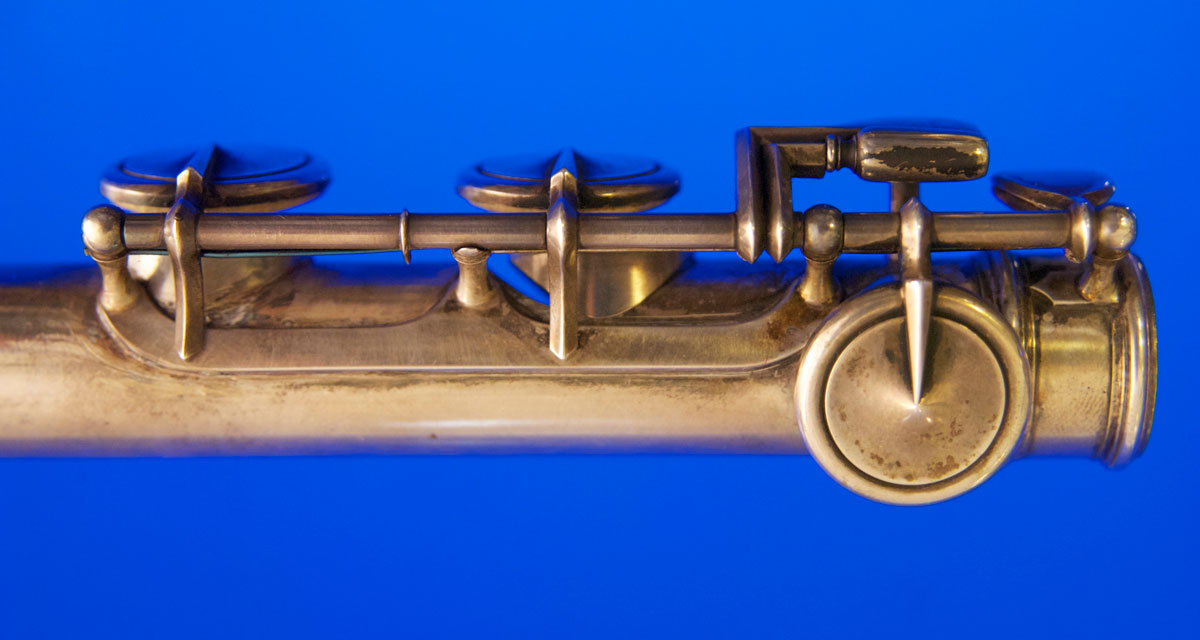 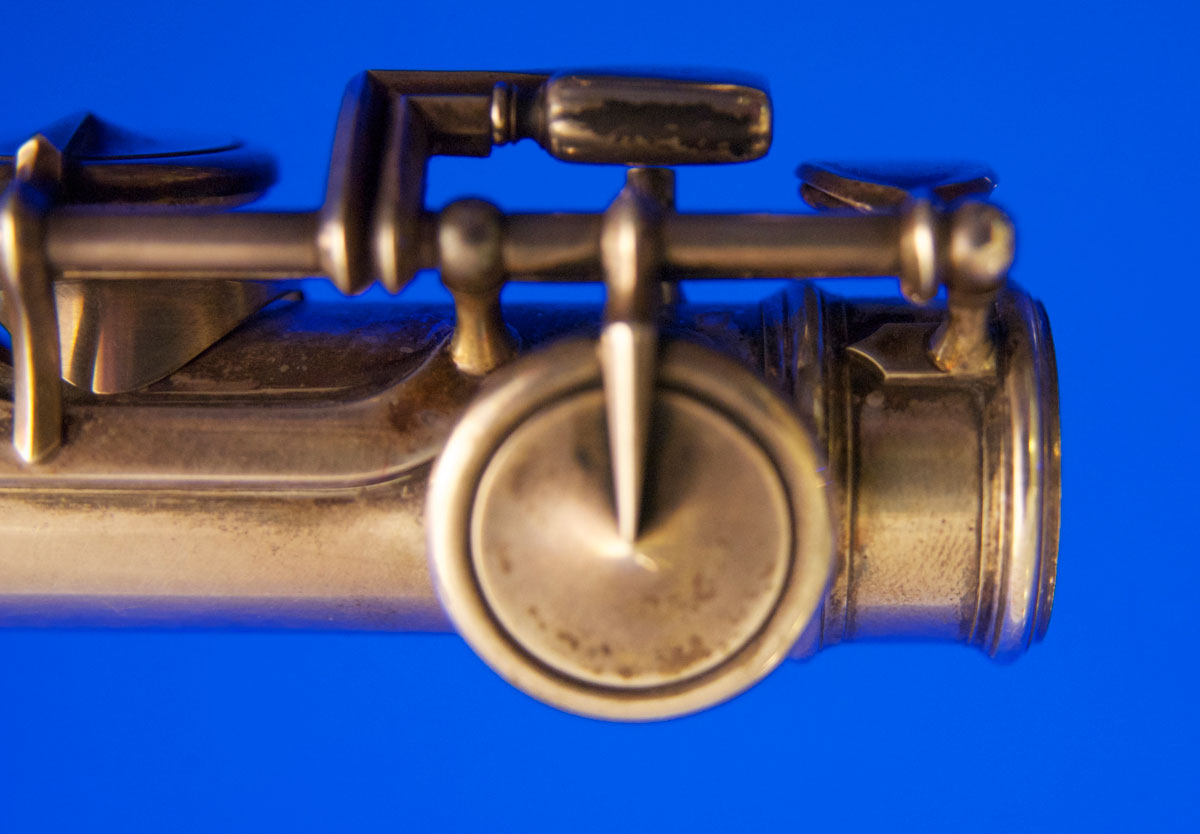 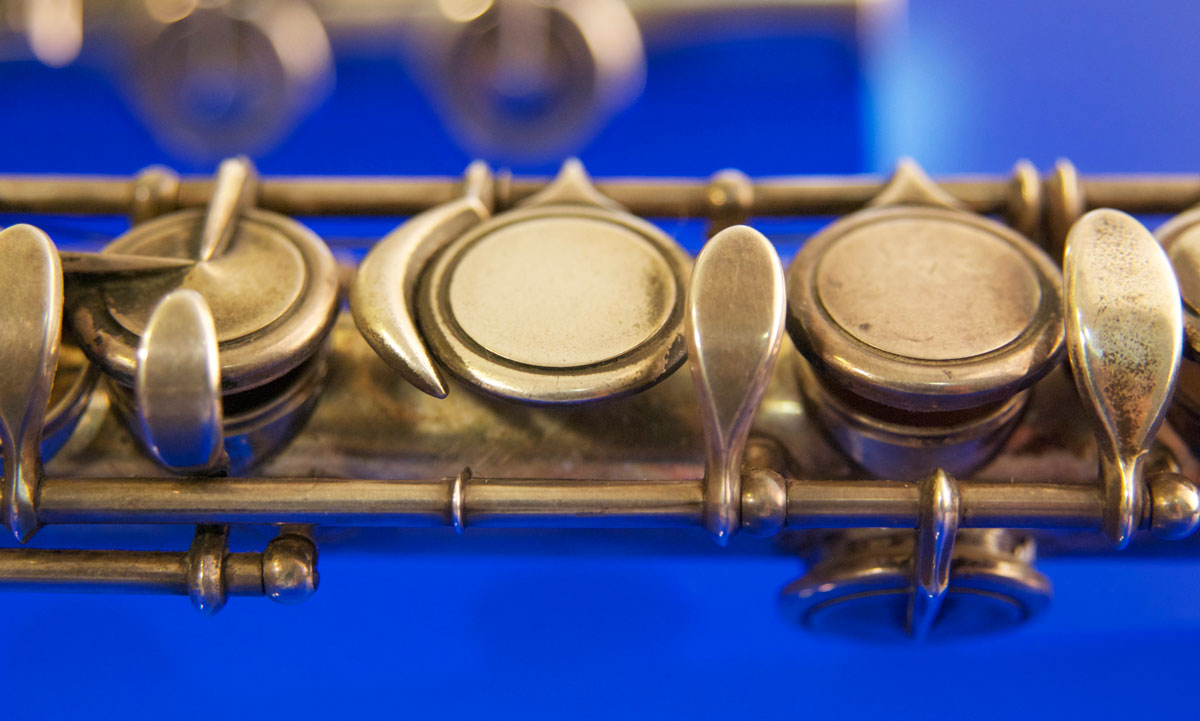 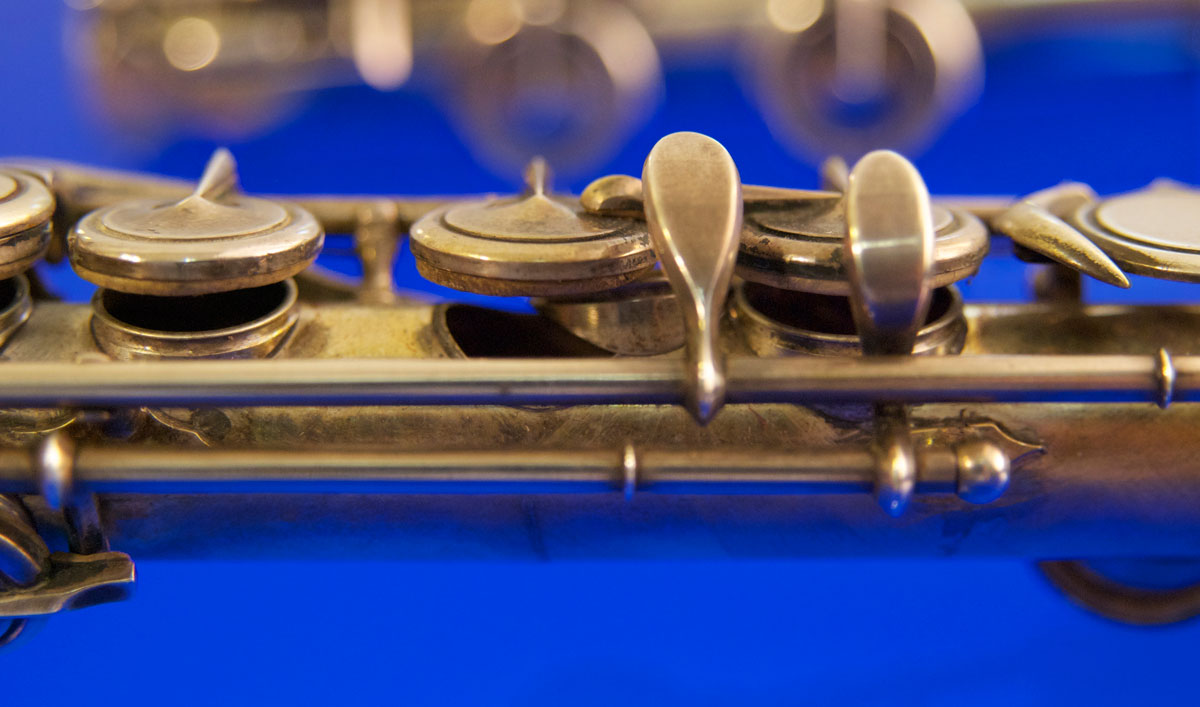 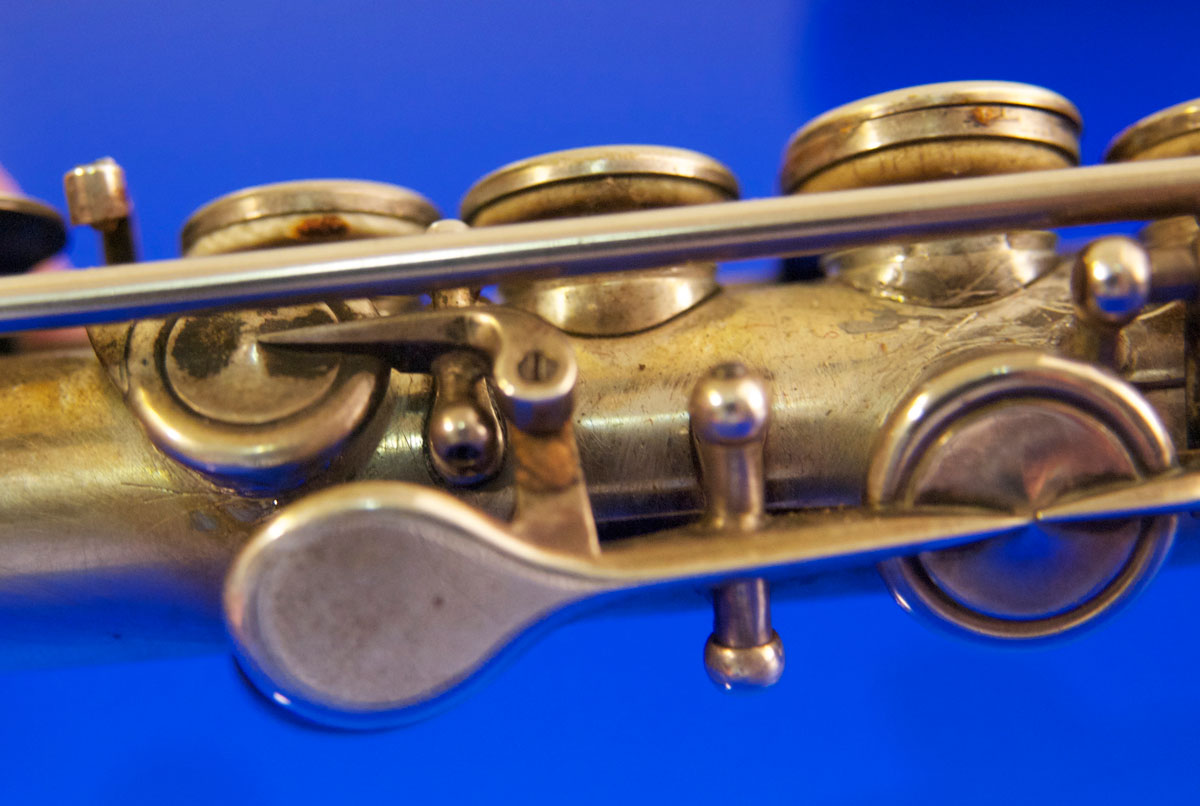 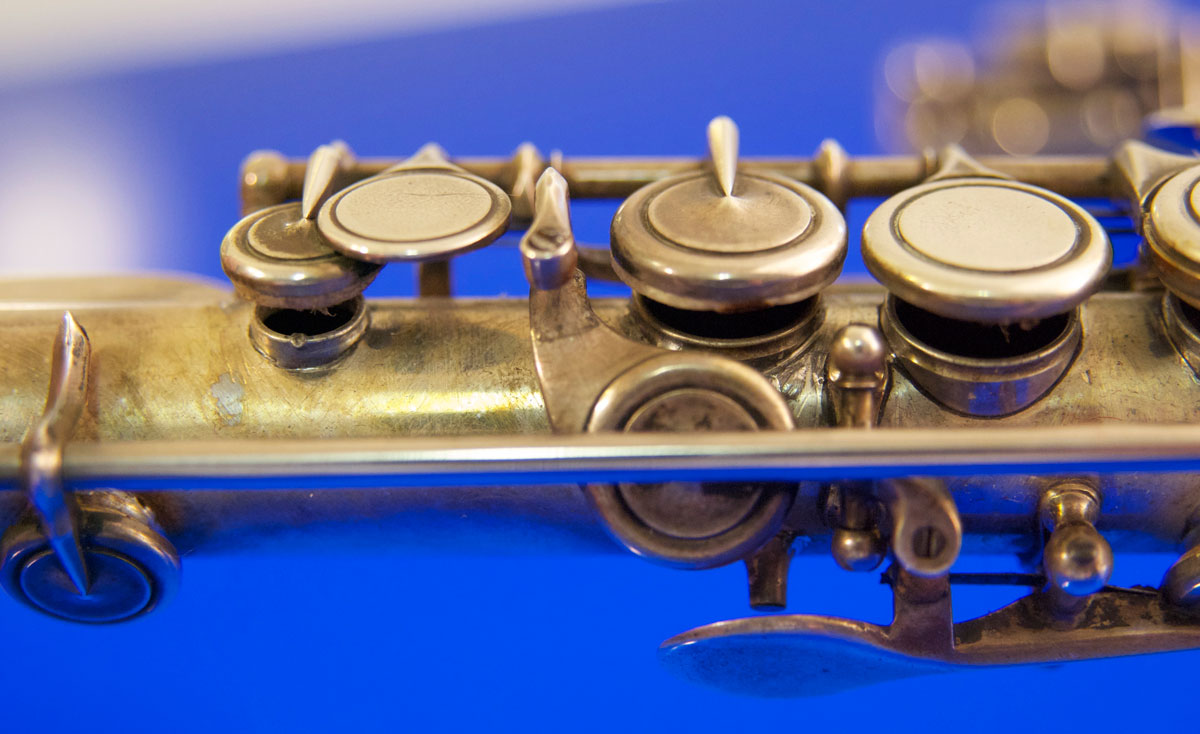 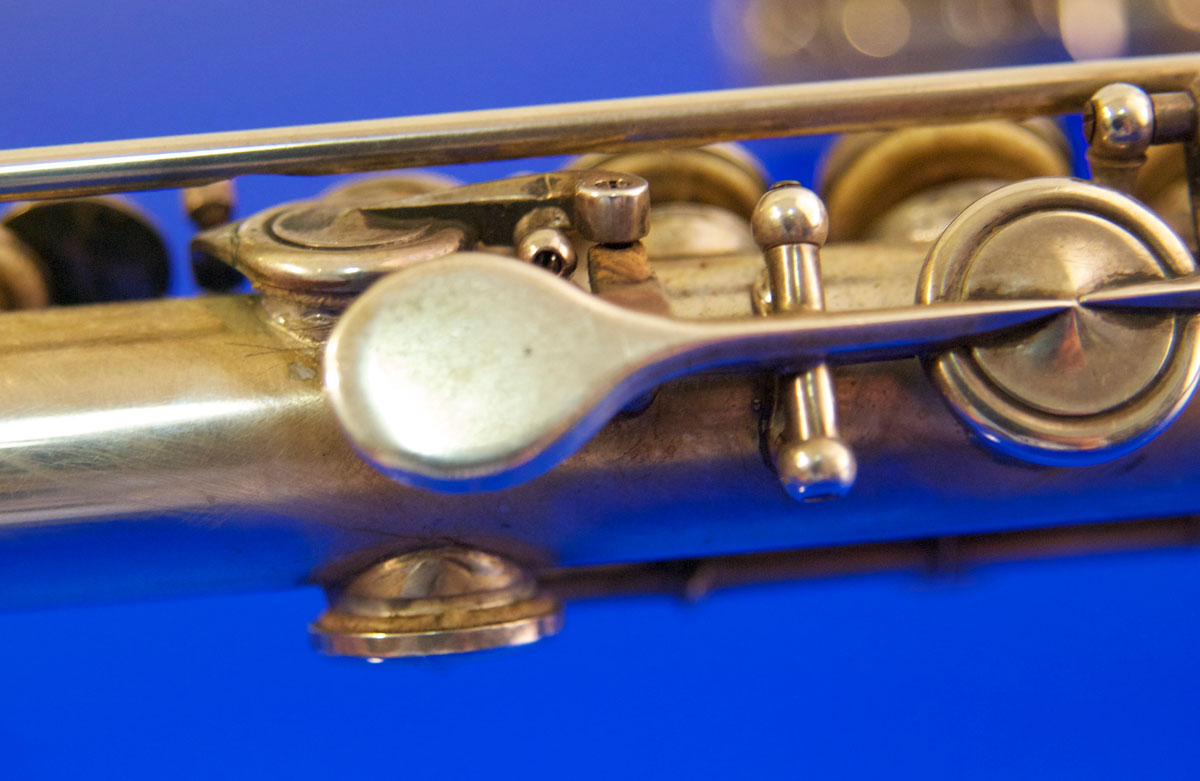 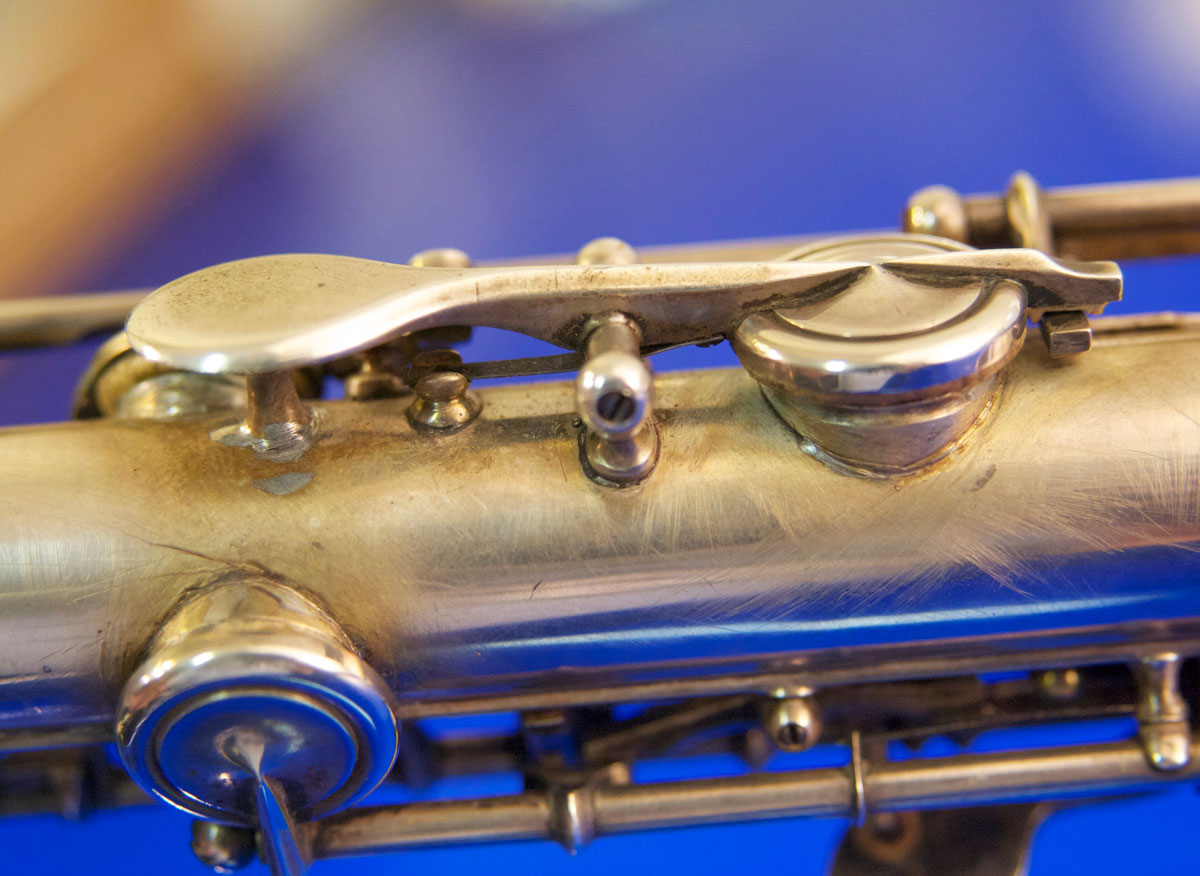 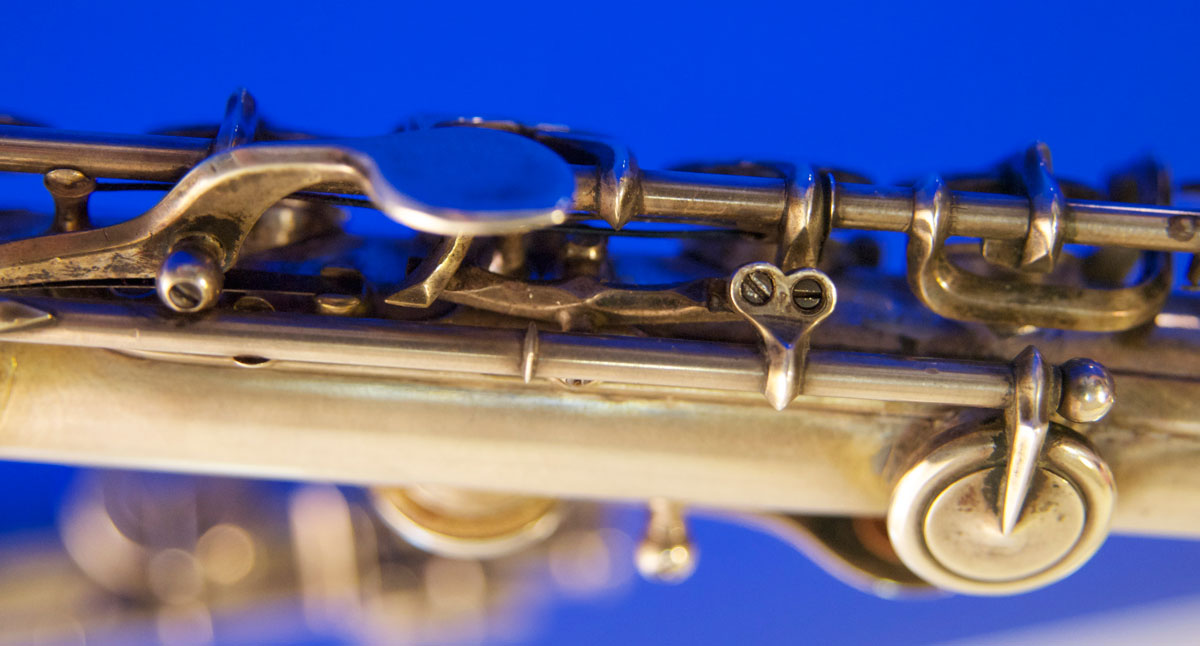 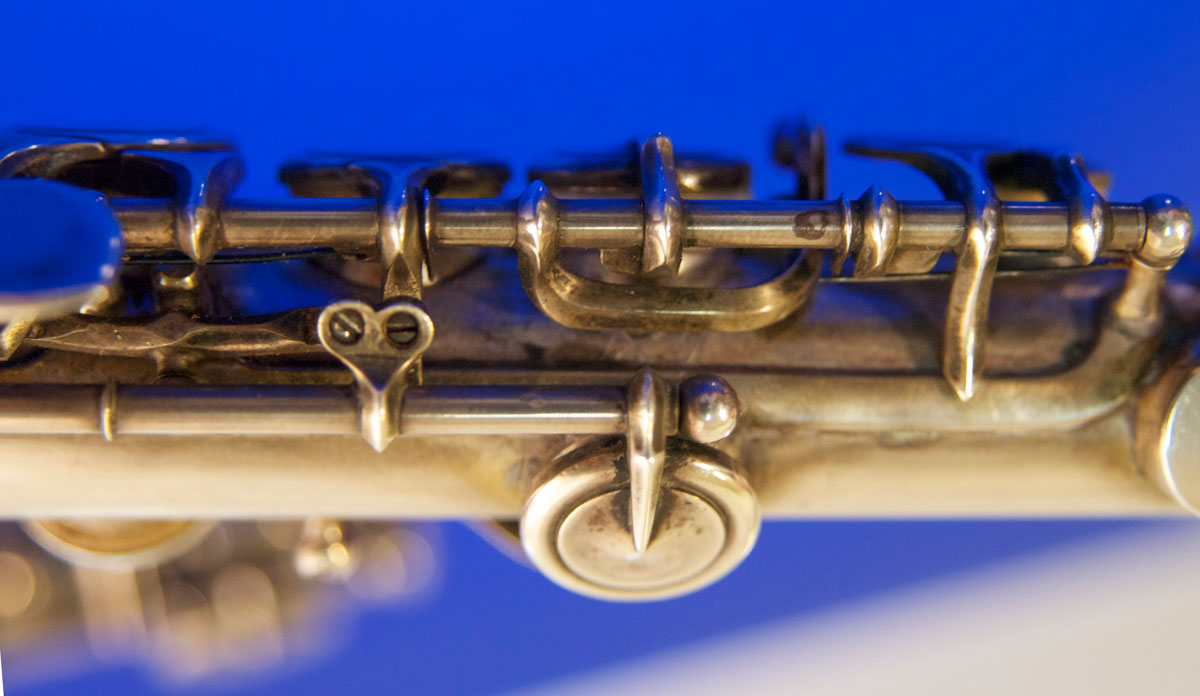 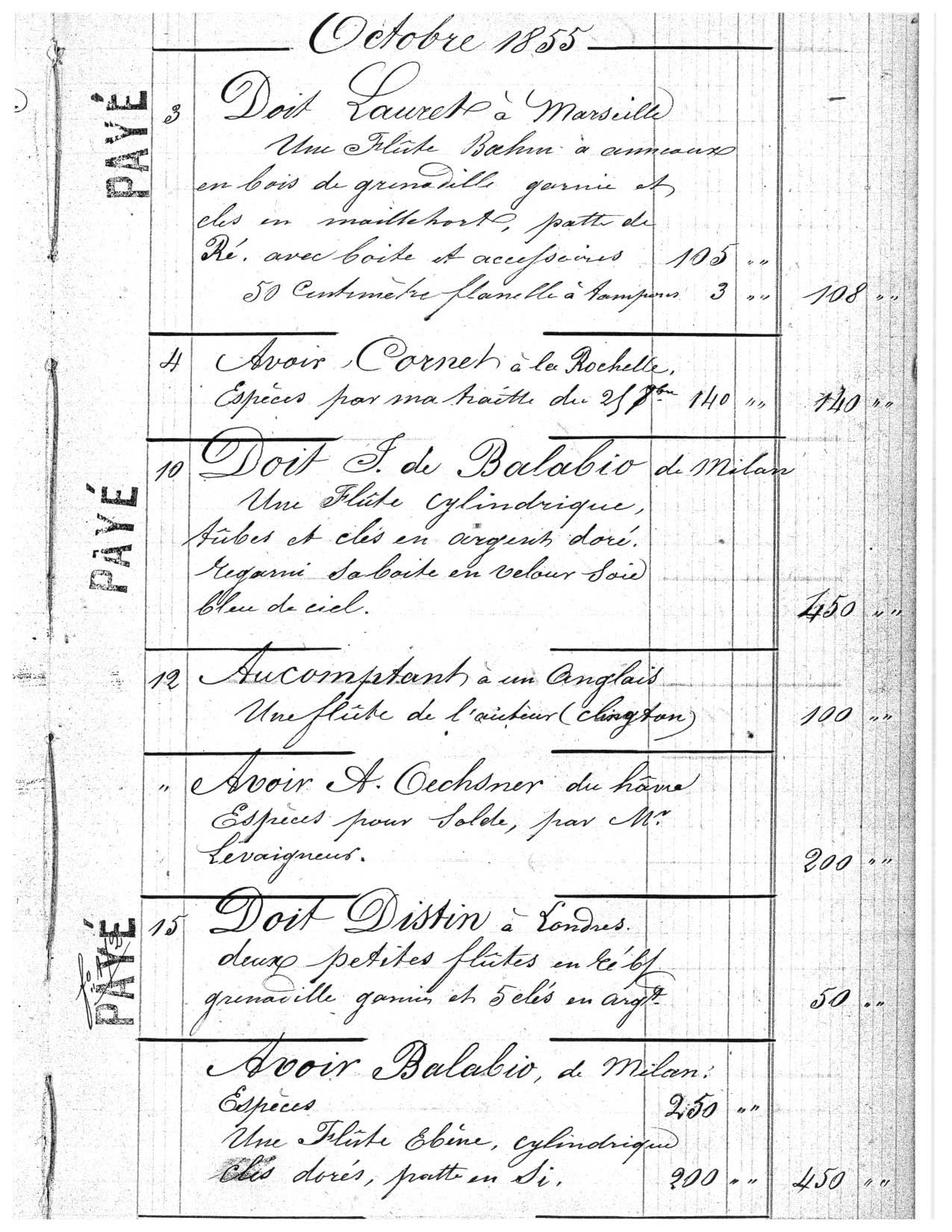