Manufacture Date: Made in 1886 under Debonneetbeau. This was made just the year before one of the surviving record books, and does not appear in the later books.

Hallmarks: Hallmarked on tubes with boar's head and

Comments: This instrument has more stories to tell, after several lifetimes of storytelling. Indeed, there are many mute adventures enshrined in the mechanism today. Remarkably, the instrument does play enough to recognize the classic Lot sound and resonance. This is an opportunity to own a Louis Lot flute at a very low price.

Material: Made of silver, with steel springs.

System: This is Lot's Model 6, silver flute with B foot. The low B is left-hand pinkie operated, and this key closes all of the footjoint keys. The footjoint shows innovation in the set screws for C and C#, and the attendant repositioning of the pinless rod to the front of the mechanism, passing over the C# key. This bypasses the set screw for low B, and closes the C# for low C, thus rendering unnecessary the little corner clutch normally in the crotch of the C# touch. Although much of the footjoint has been repaired or reworked, it does appear as if the touch for D# has been moved closer to the C and C# touches, thanks to the low B tail. This meant that the traditional teardrop D# would not fit, and the straight sided D# key introduced as a result. This is certainly the earliest flute we recall seeing with the straight-sided D#. The next such instrument in our files is #5212, made 1892, also with a left-handed low B.

Condition: This flute has died and been resurrected several times. It is the Phoenix of Lot's, and has attracted considerable interest from past caretakers. The last overhaul really achieved momentous progress in overcoming more signs of fervent usage than one could possibly expect. I doubt that the last work could be repeated, but there is enough left in this instrument to realize the glories of times past, and times yet to come. The embouchure has been replaced at one time. Many of the silver rods have split. The rod on the C# is probably the only one that should really be replaced.

Pitch: Appears to be pitched a bit high, although not fully old pitch. Plays around A=442 today, and A=440 when pulled out a reasonable 6 mm. 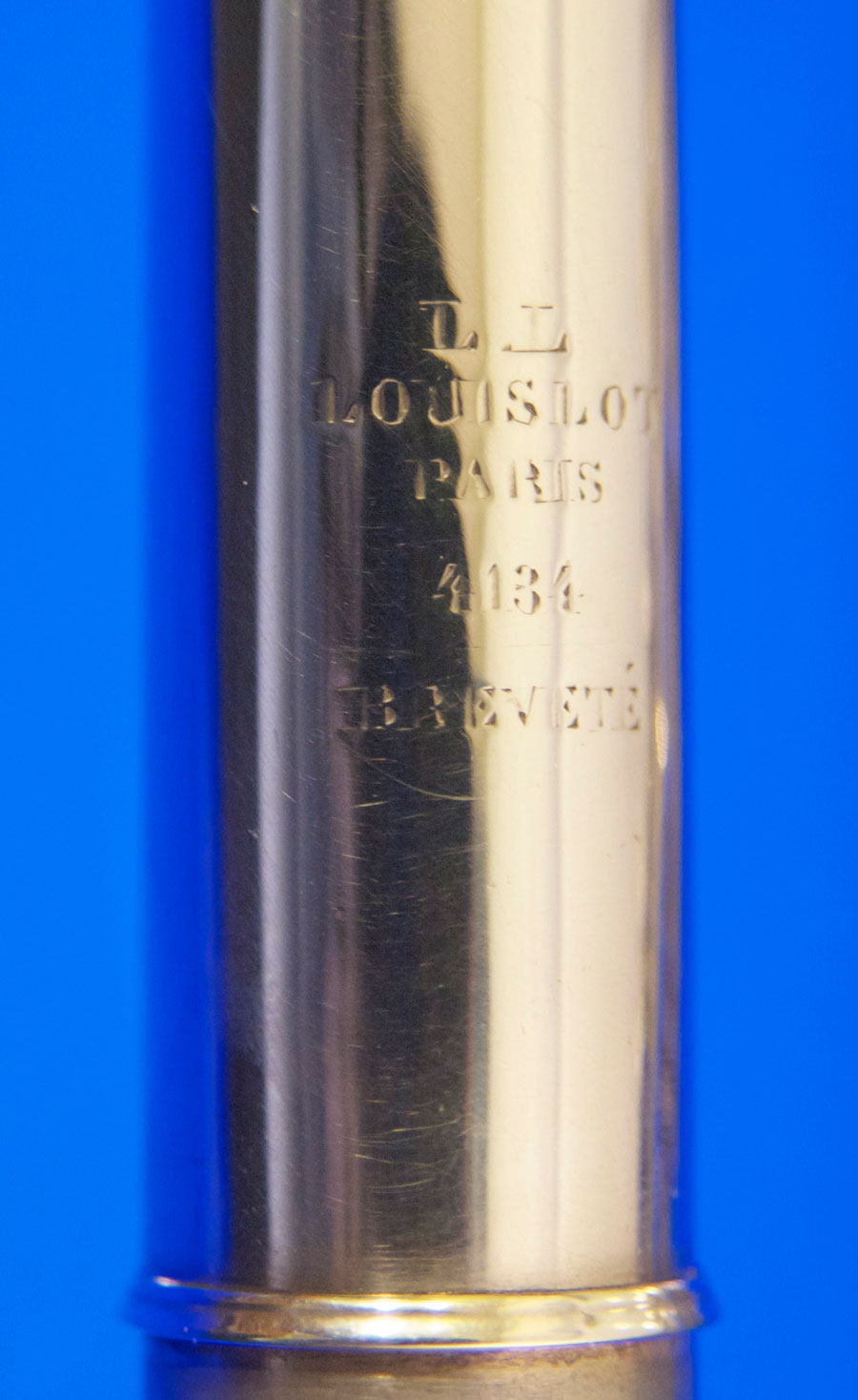 Louis Lot #4134 was made in 1886, under Debonneetbeau. This instrument includes some experimental keywork, and has been heavily used.

The right hand mechanism shows the elongated trill touches and the simplified mechanism of Villette with a hanging T clutch, but without any set screws. 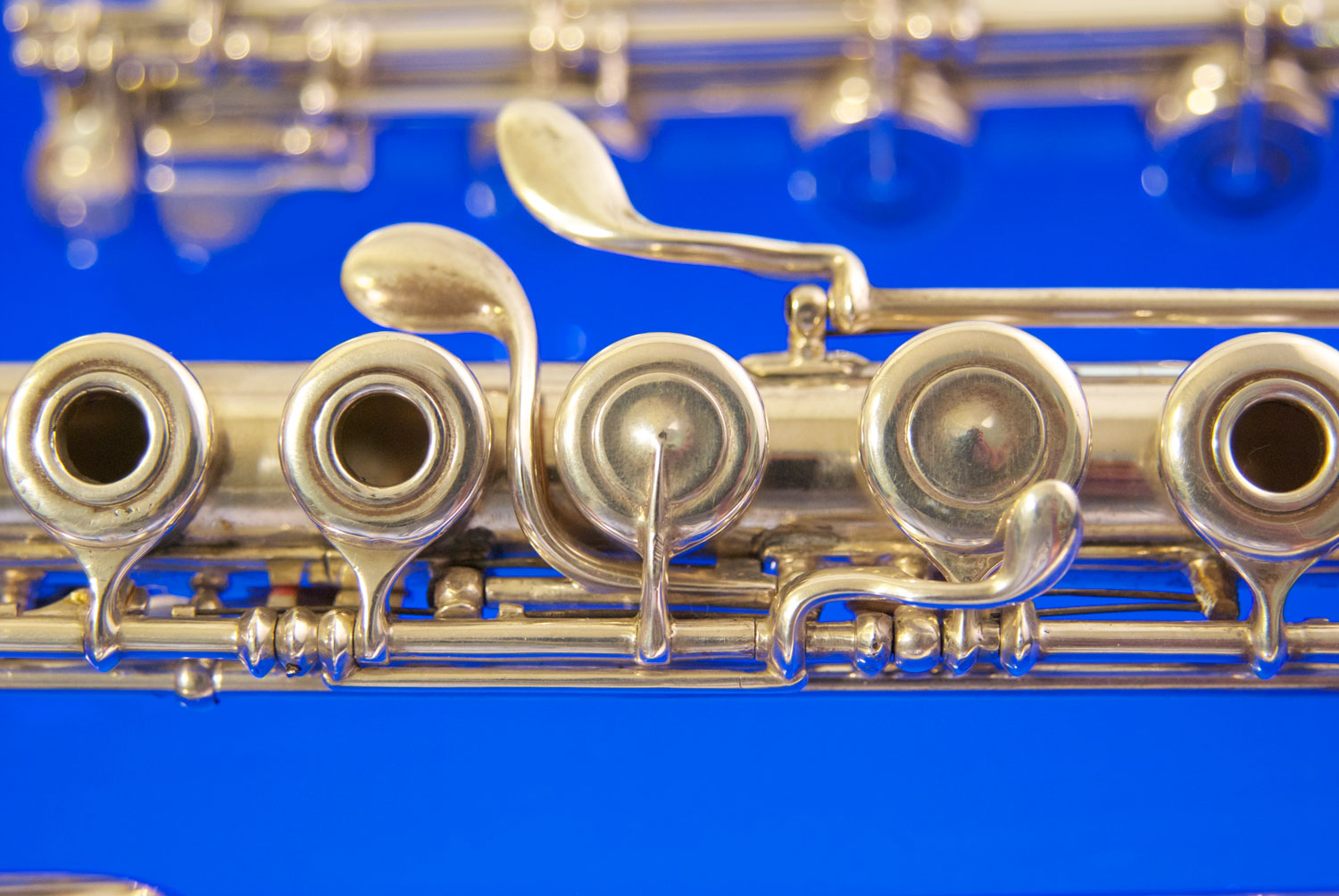 The lovely center of this flute shows the outside rod for the B thumb trill (on the bottom of the stack) and the long touch for low B. 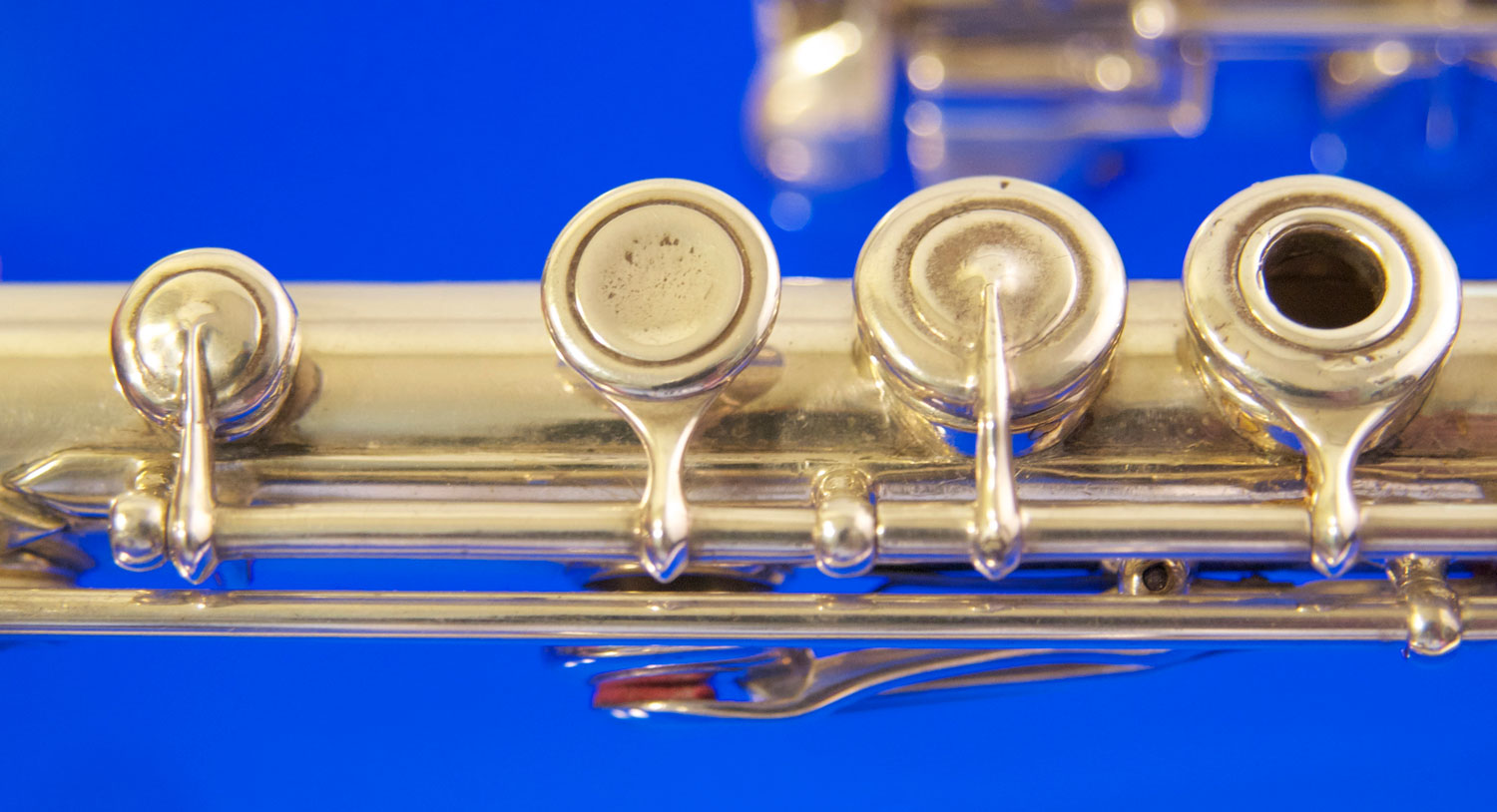 The left hand mechanism shows signs of wear from a long and productive life.

The footjoint is fascinating, with the unique set screws for closing the C and C# when the B key lever is pushed. The C travels over the C# touch arm, forming a clutch which closes both keys when the C is activated. 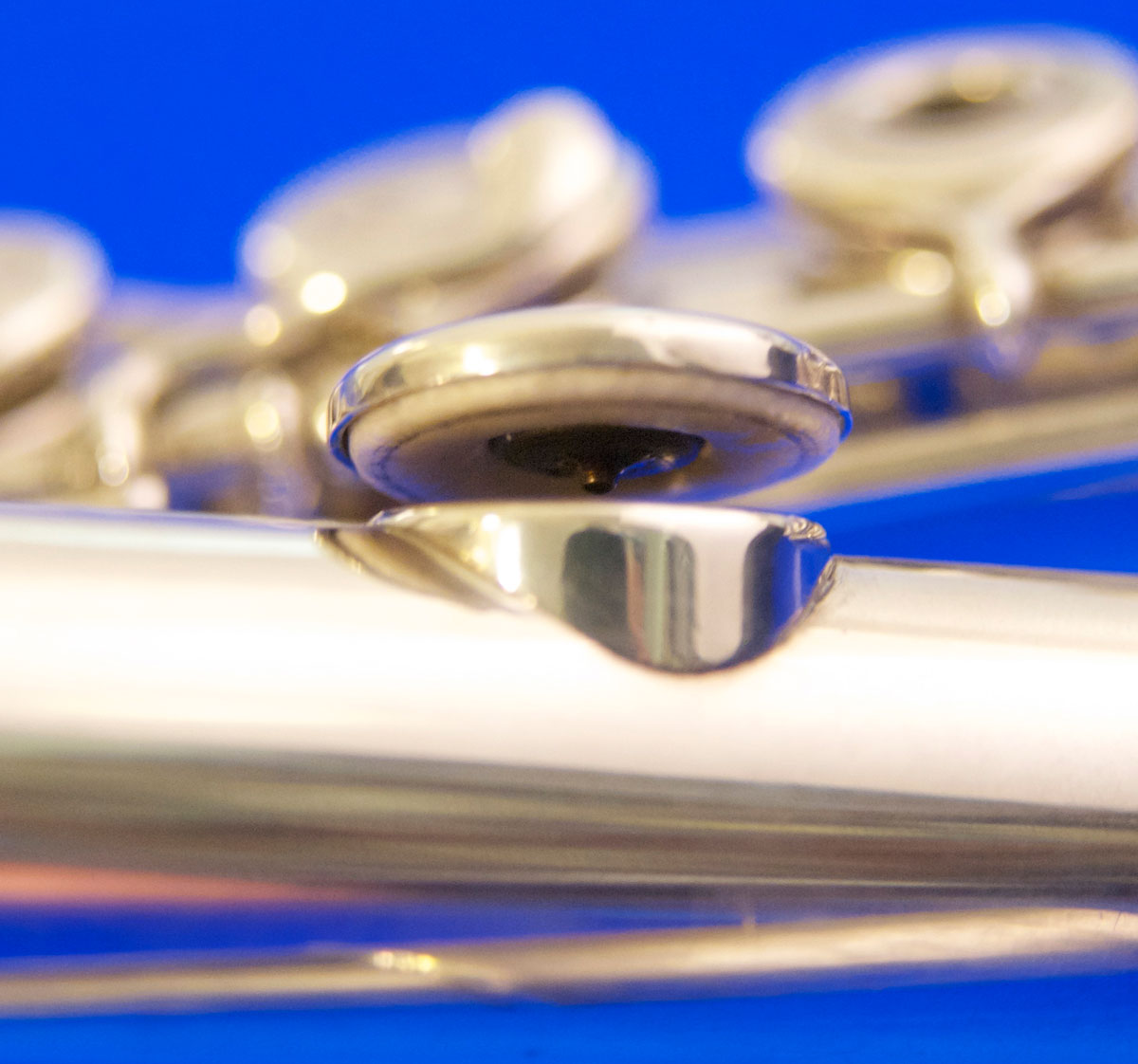 This footjoint tone hole shows a smoothing of the rim from buffing, and the original pad washer. 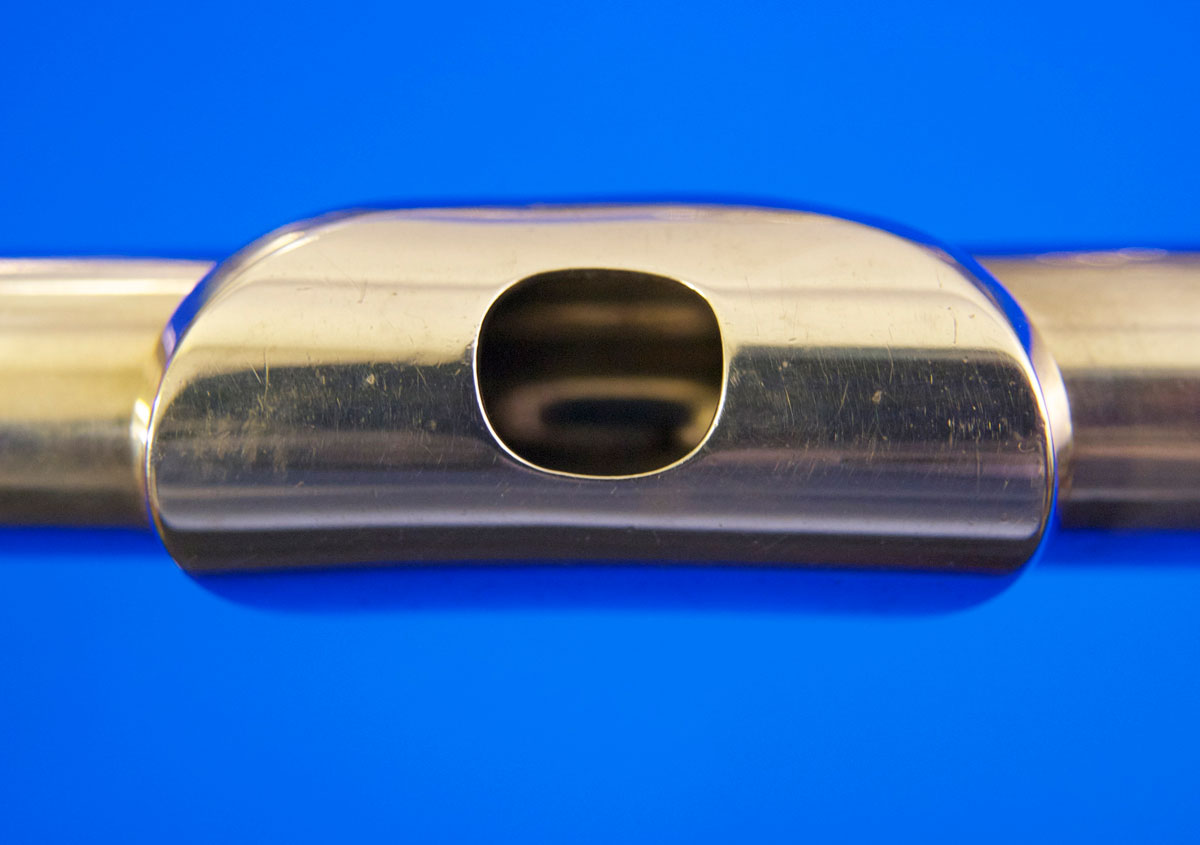 This lipplate is a replacement, and the embouchure is a bit wider than one would expect, at 12.5 x 10.7 mm. 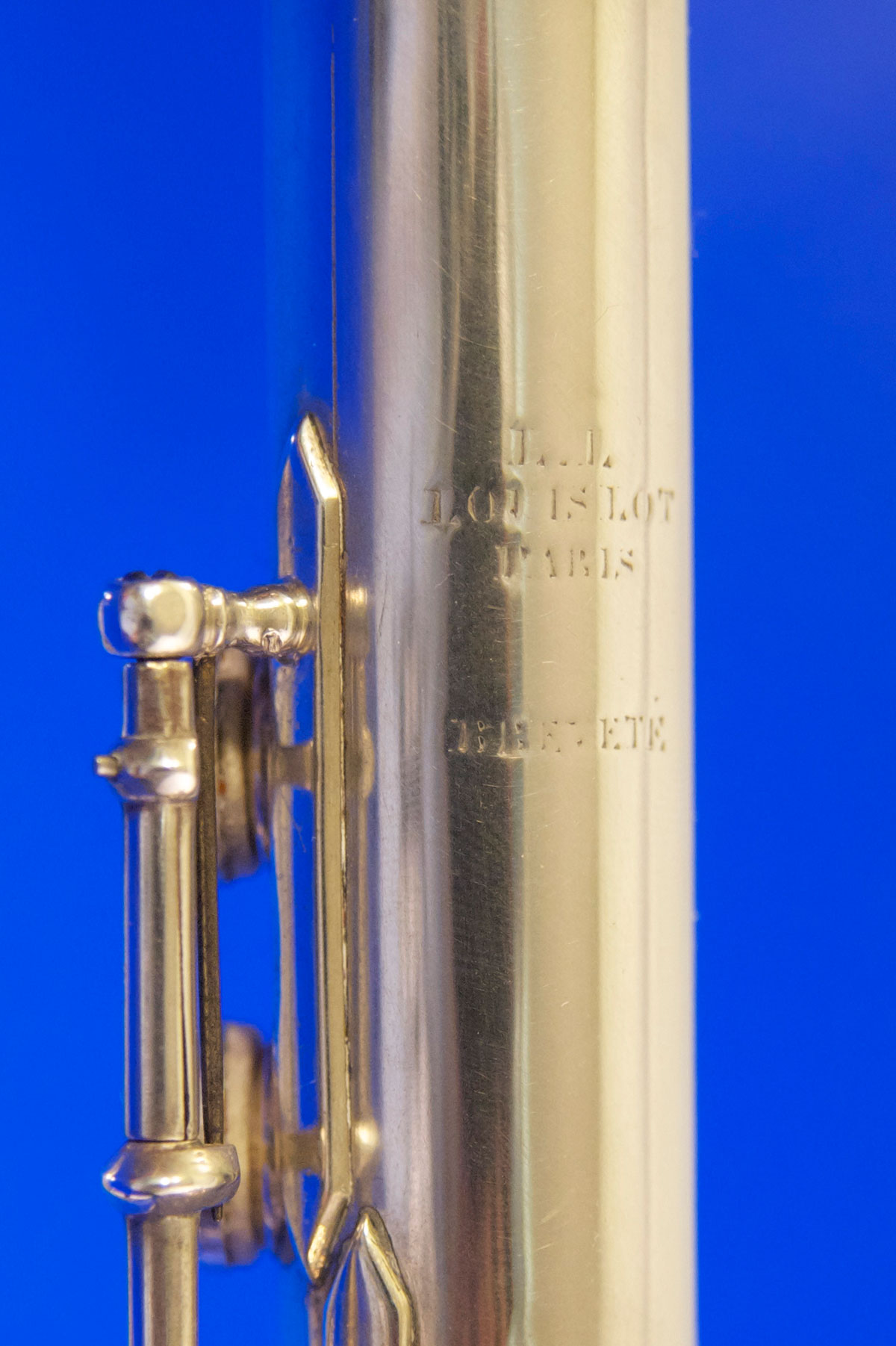 The body mark is stamped into the silver tube, while the headjoints are engraved. The ribs are lovely, yet the trill key rod is split, like many of the rods on this flute. 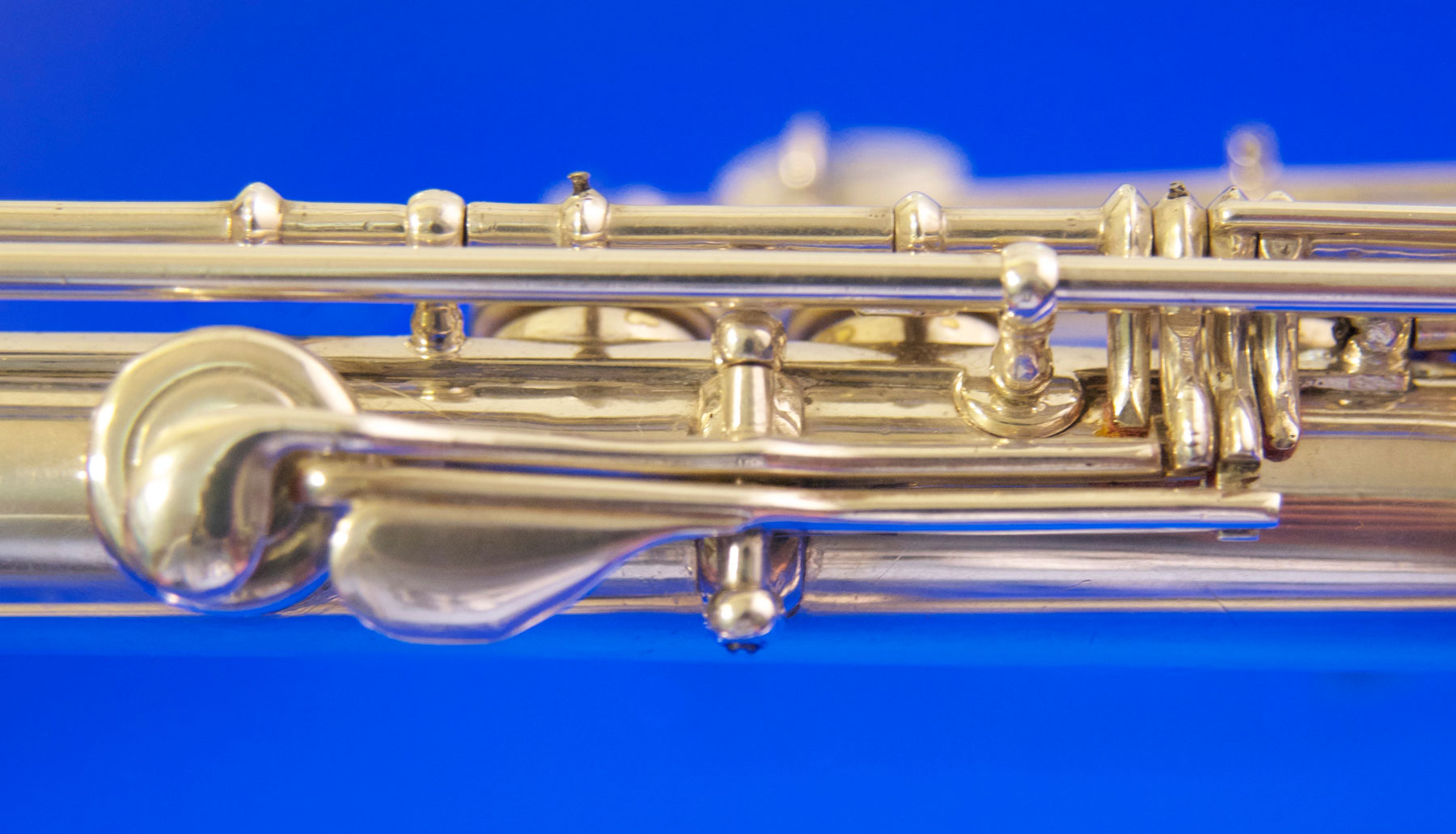 The great cluster of tails includes the thumb trill for B-C and the Bb touch, known as the Lot thumb at the time but called the Briccialdi thumb today. 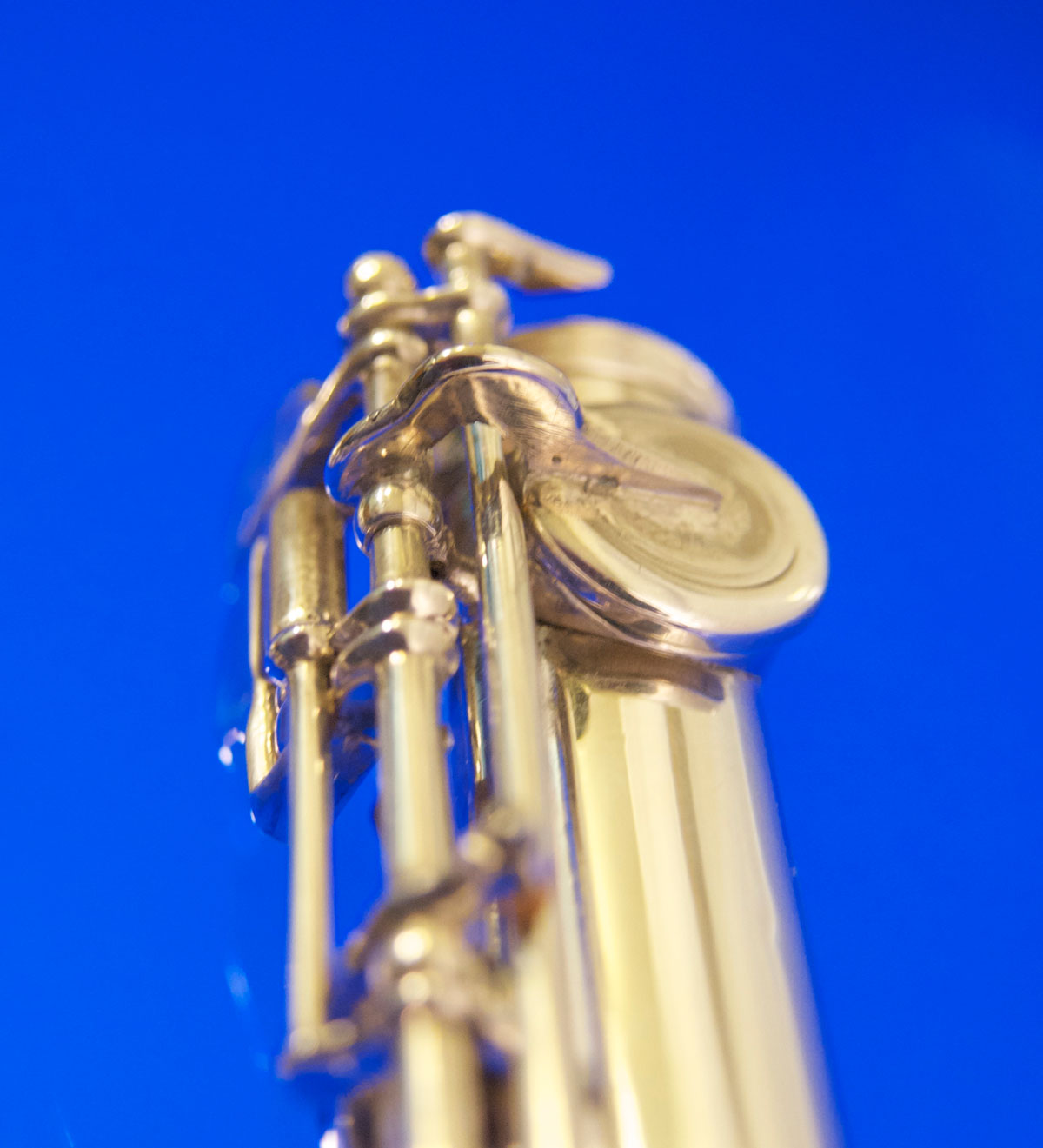 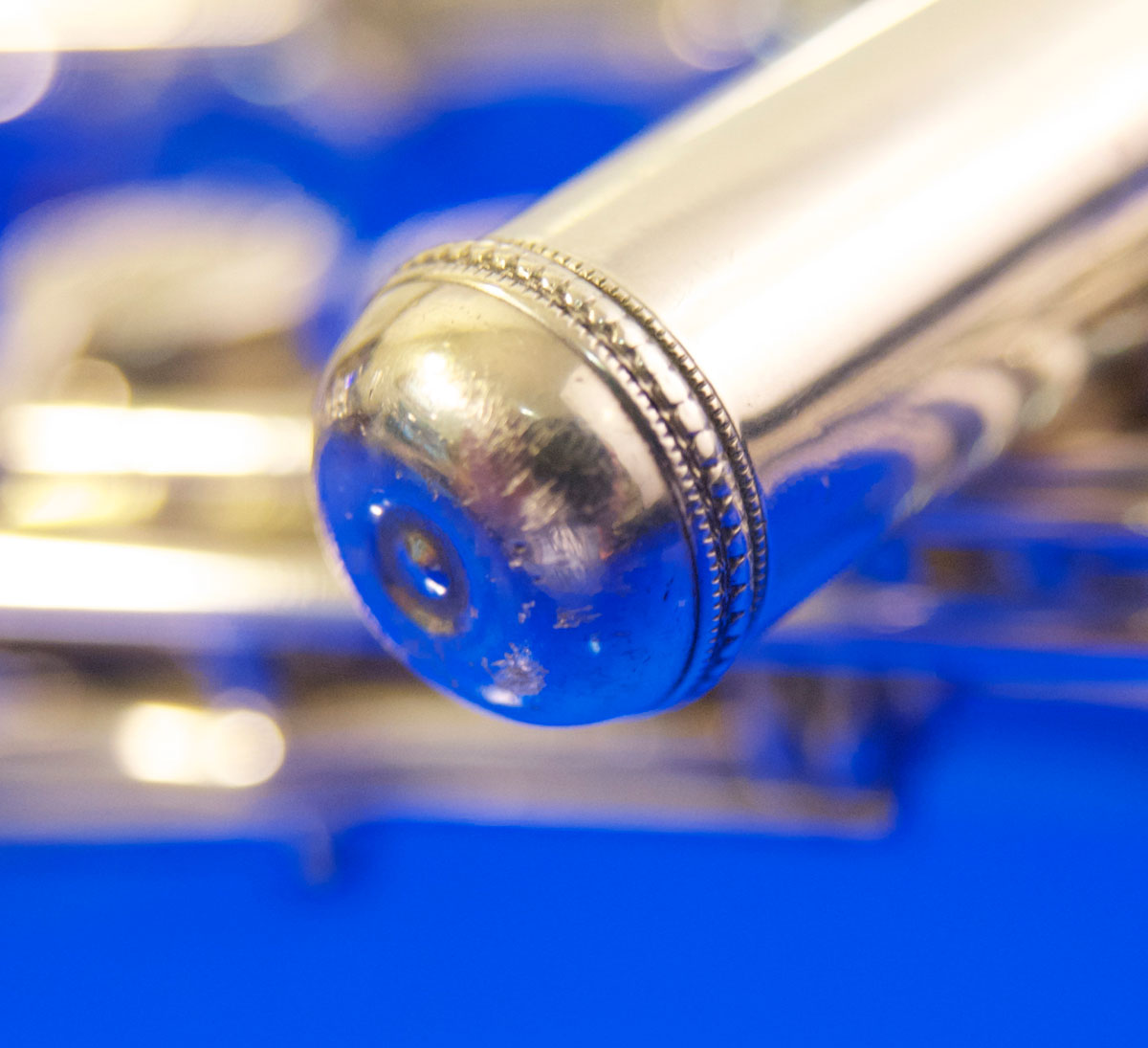 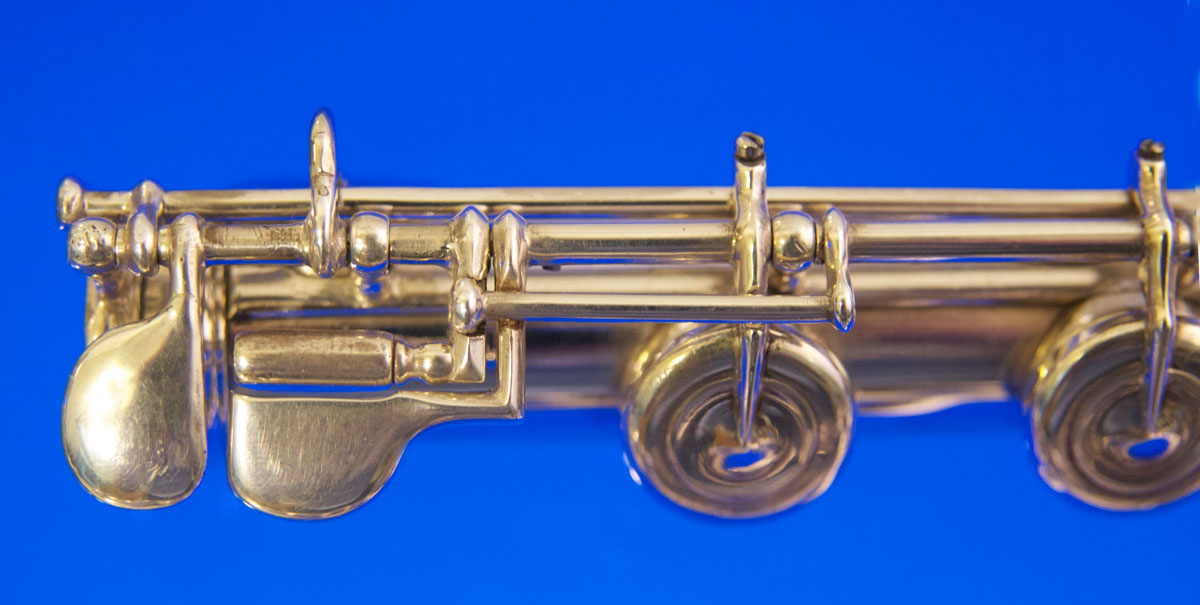 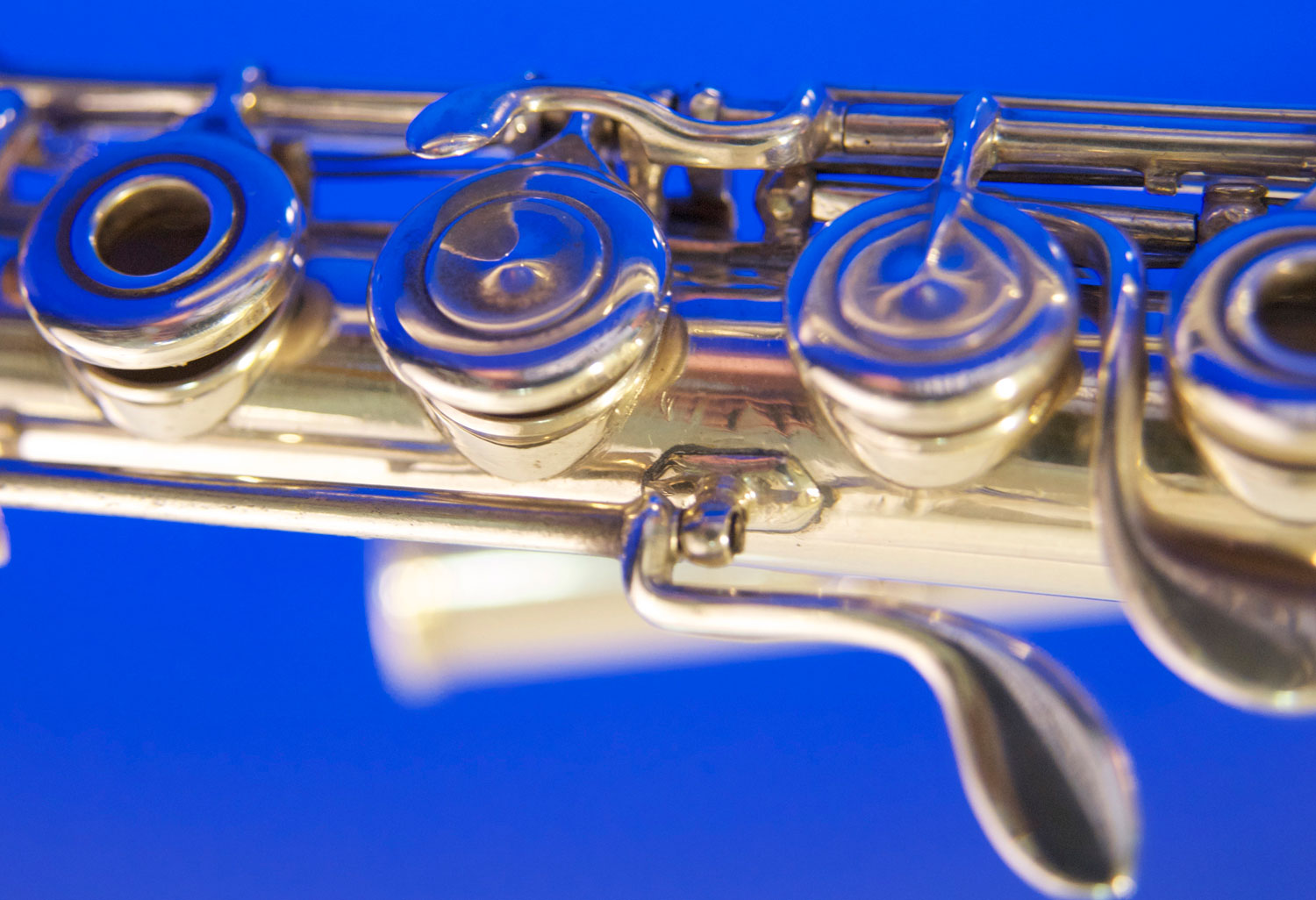 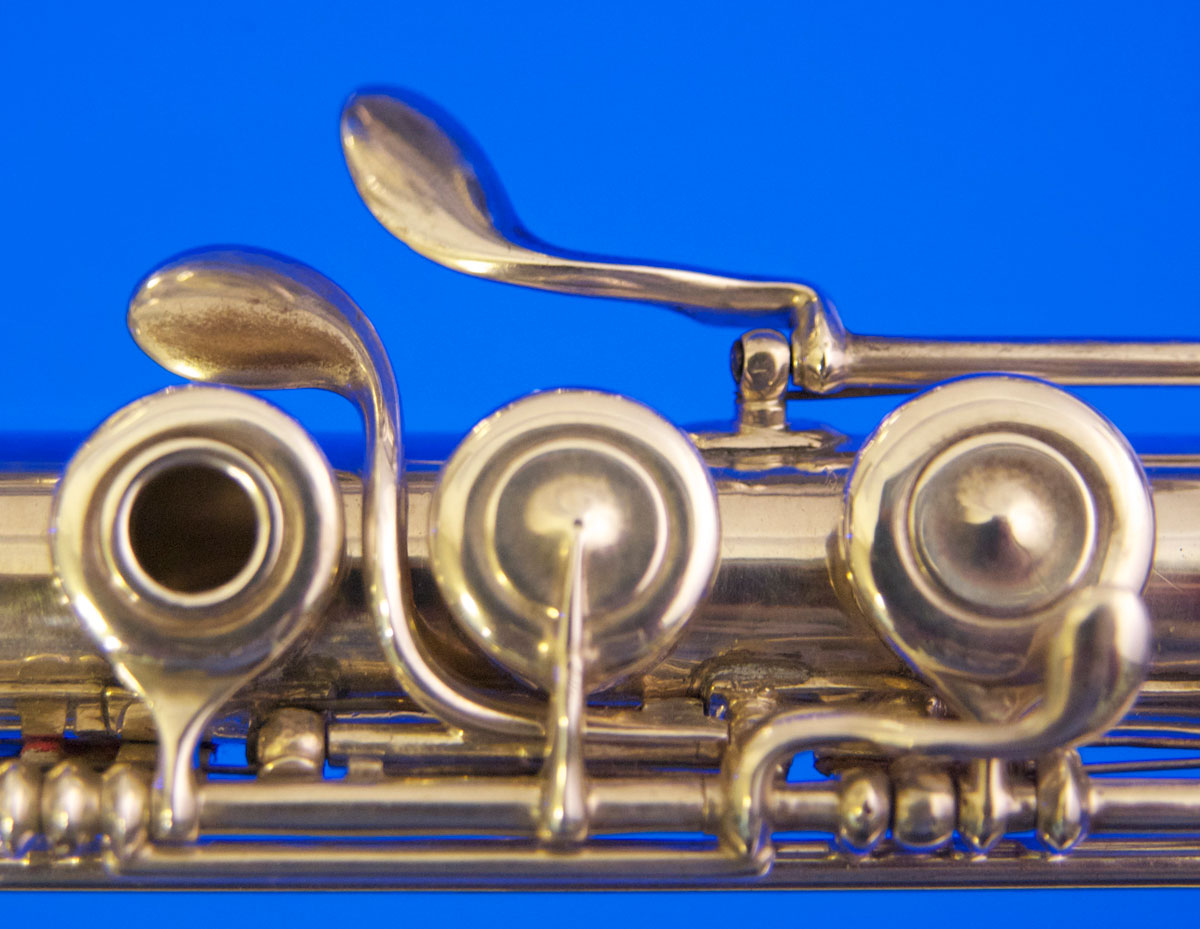 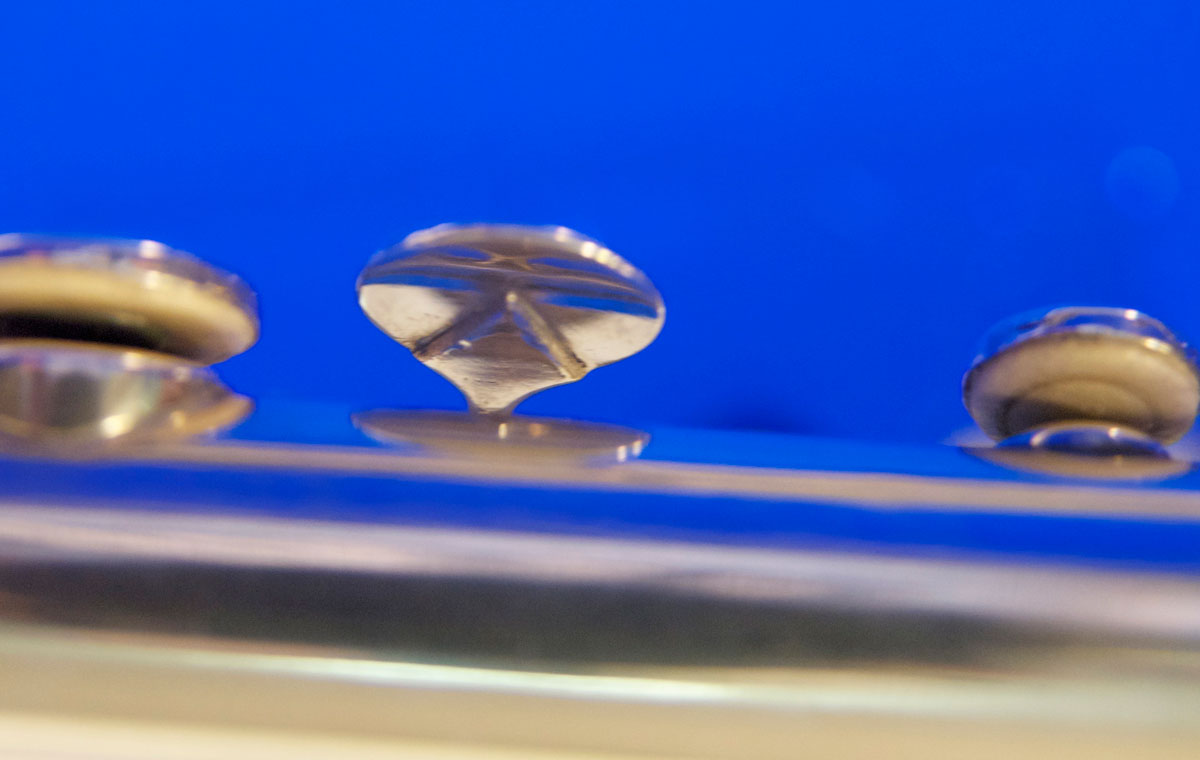 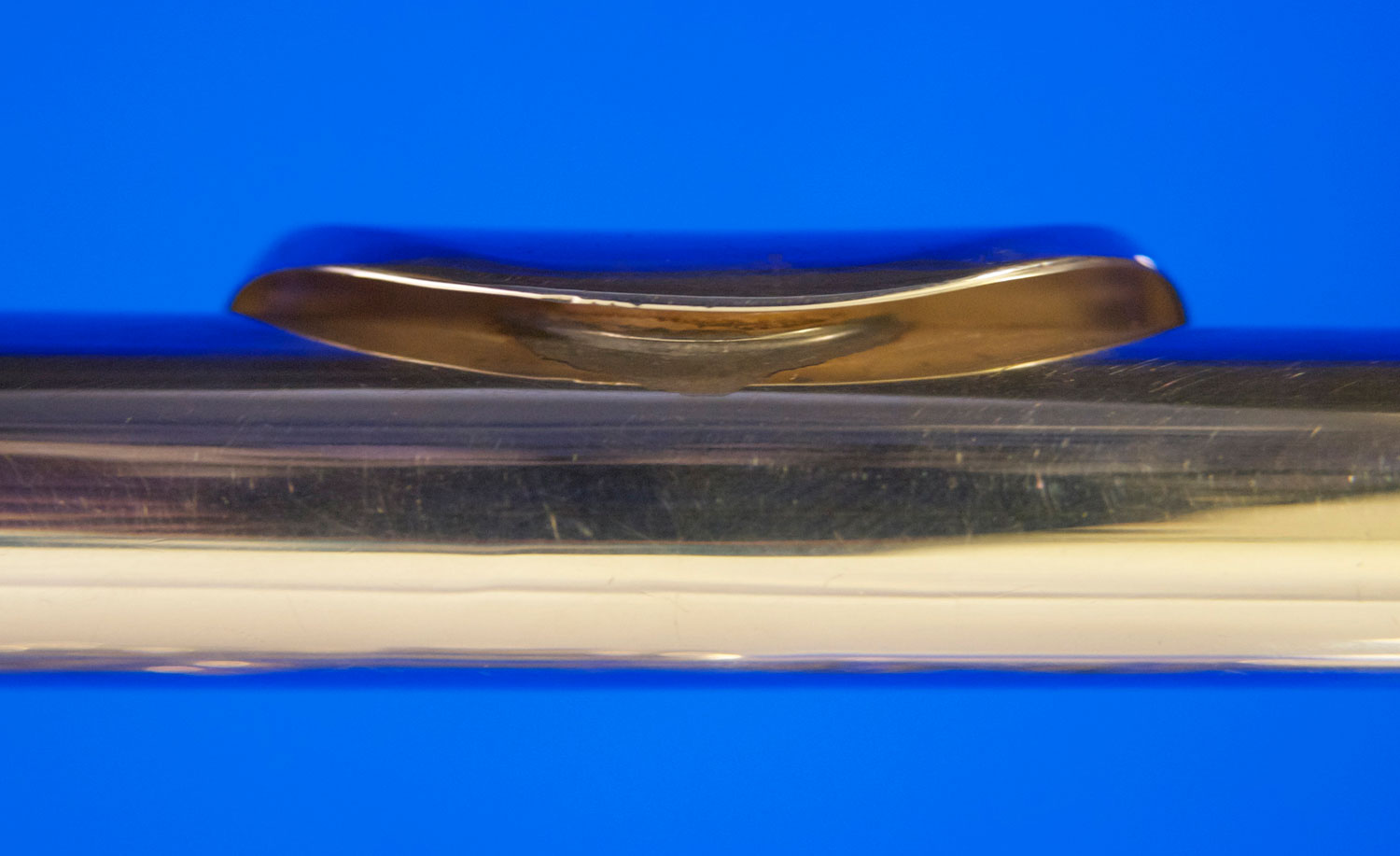 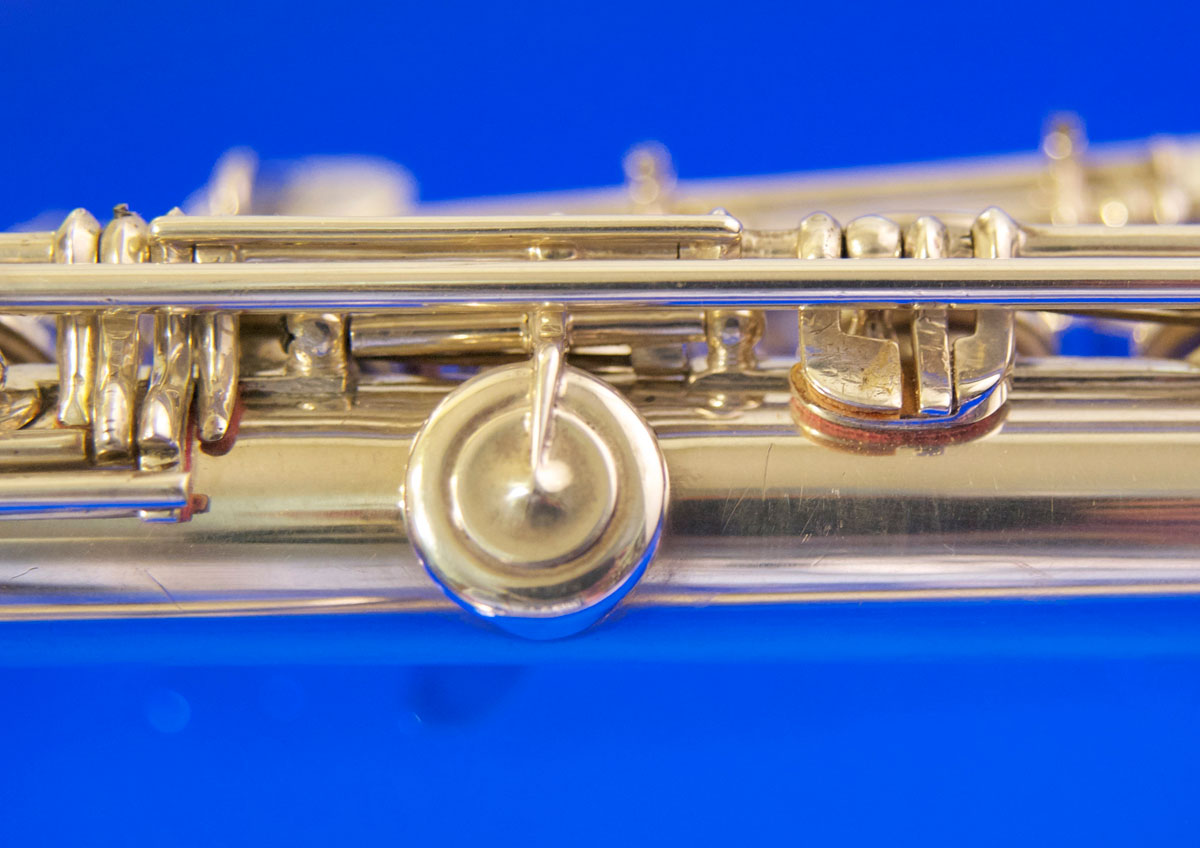