Manufacture Date: Made 1897-1905 (Berdahl). This is the earliest known concert flute made in Los Angeles.

Comments: This extraordinary and innovative flute is the earliest concert flute made in Los Angeles and known to exist today. George Haynes was, as far as we know, the first flutemaker to make L.A. his home. A few other instruments from his Los Angeles years have been mentioned in letters to Dayton C. Miller, but the famous alto flute now in the Miller Collection is the only other instrument known to survive. Thus this is the only concert flute available to see the status of flutemaking in turn-of-the-century Los Angeles. This instrument is an exquisite example of American flutemaking by one of the great pioneers and inventors of the art. From Susan Berdahl's dissertation: George Haynes established himself in Los Angeles by 1898, staying there until 1905. In 1899 his residence is given as 135 E. Adams. In 1900 he is listed as a flutemaker residing at 441 Temple, and in 1901 as a flute manufacturer at 1204 Georgia Street. Presumably he had no formal shop during these years, but worked out of his residence. George Haynes rests here in Los Angeles, in the Inglewood Cemetery. Nina and I visited his grave, and a photo is displayed here.

Material: Made of composite material, with silver keys. Extra headjoint of cocus (?) wood, with composite crown. Most springs of gold, with steel springs at the B and Bb keys. The composite material is not the typical ebonite, but is of a different, richer black color. Most surprisingly, it contains particles that have either migrated to the surface or were intended to give the instrument a textured surface for ease of holding. The bore, however, is also slightly textured. Wooden cork with wooden disk-facing. Composite headjoint cork without facing.

System: Full Boehm system with one piece body and C foot. Closed G# and vertical Lot Bb, made with vertical touch and opposing arches. Two headjoints; one of wood, the other of composite. Both headjoints measure the same, so they are not for pitch change but rather a change of voice. This flute is one of the earliest examples of George Haynes' genius in flutemaking. He has replaced the pins in the mechanism with set screws, very cleverly placed through the silver disk under the balls at the shoulder clutches as made by Boehm. His mechanism generally follows Boehm and Mendler, with round edged plateau keys, a two-piece backclutch, offset G, two rollers on the footjoint, and the "pinned" footjoint mechanism abandoned by the French during Villette. There is no trill for B or Bb. Crutch holder but crutch is lost. Body tenon with socket for tuning slide, yet only the wooden head has a slide.

Condition: In overall used but restorable condition. Composite material seems to have migrating solids. The keys show absolutely no movement sideways, which is remarkable. The pad washers are the screw, leather washer, disk design of Boehm. The pads are shot, and may well be original. The headjoint corks are shrunken.

Case: With old Baxter Northrop case, probably made for this flute. 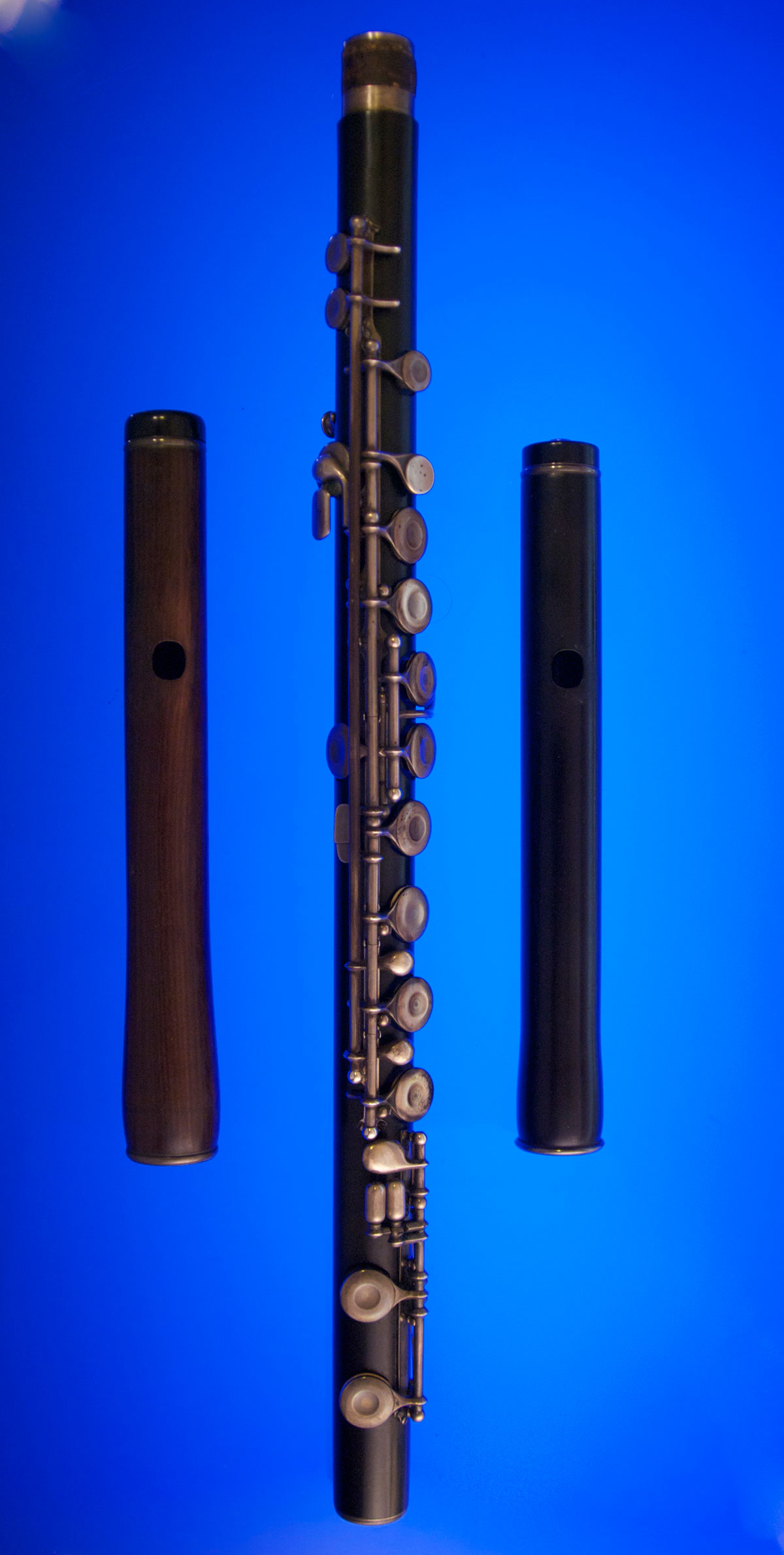 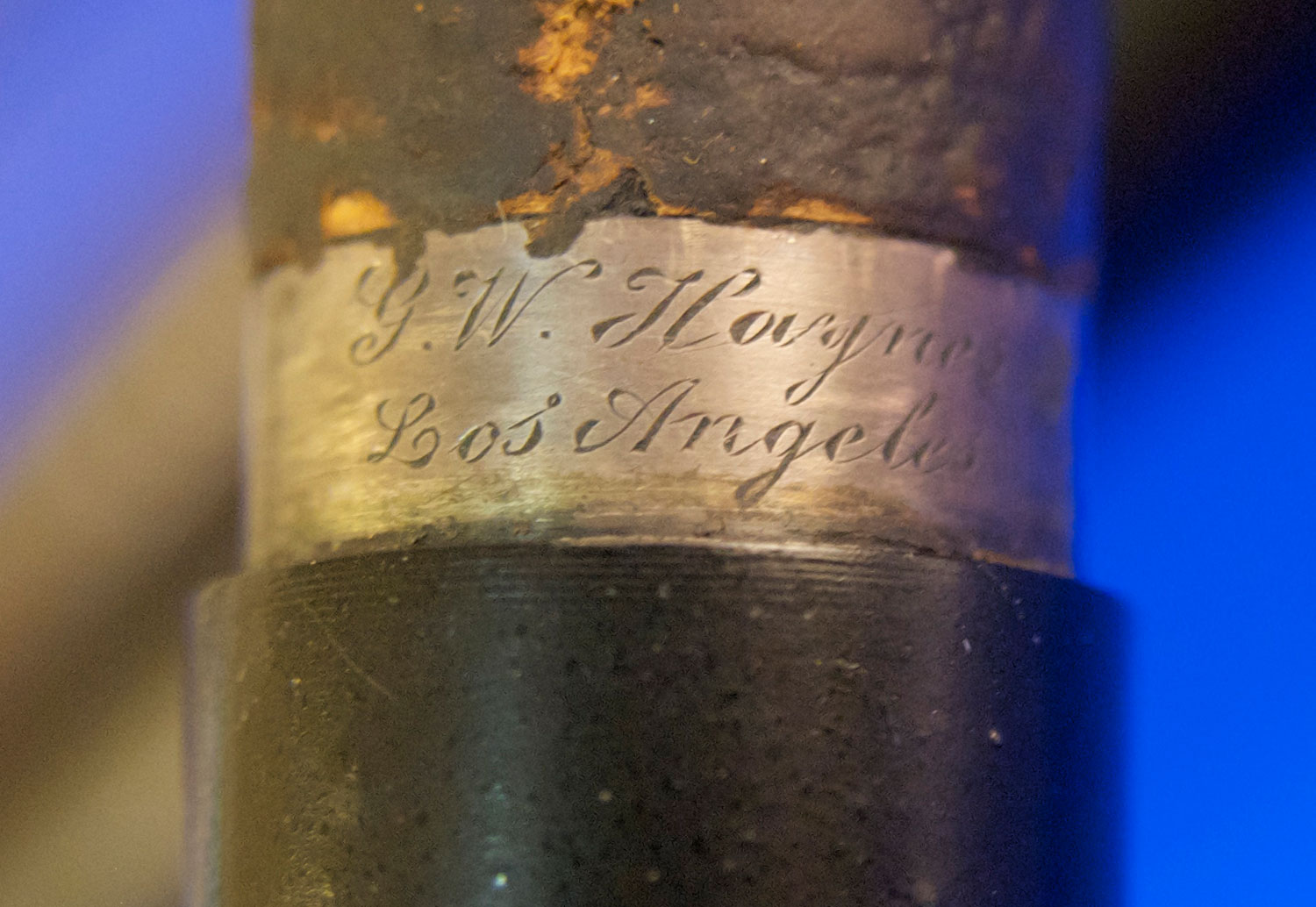 George W. Haynes is legendary for being the genius behind the Haynes flutes. He moved to Los Angeles in 1895, becoming the first professional flutemaker to make L.A. his home. George Haynes returned to L.A. at the end of his life, and is interred in Inglewood. This instrument is the only remaining Los Angeles concert flute known to us, and therefore is the earliest surviving Los Angeles-made concert flute.

The instrument is unrestored, yet the style and choices in construction are clear. This is built in the Boehm & Mendler style, with rounded Y arm plateau keys, shoulder clutches with adjustment screws, and ball-shaped trill touches. 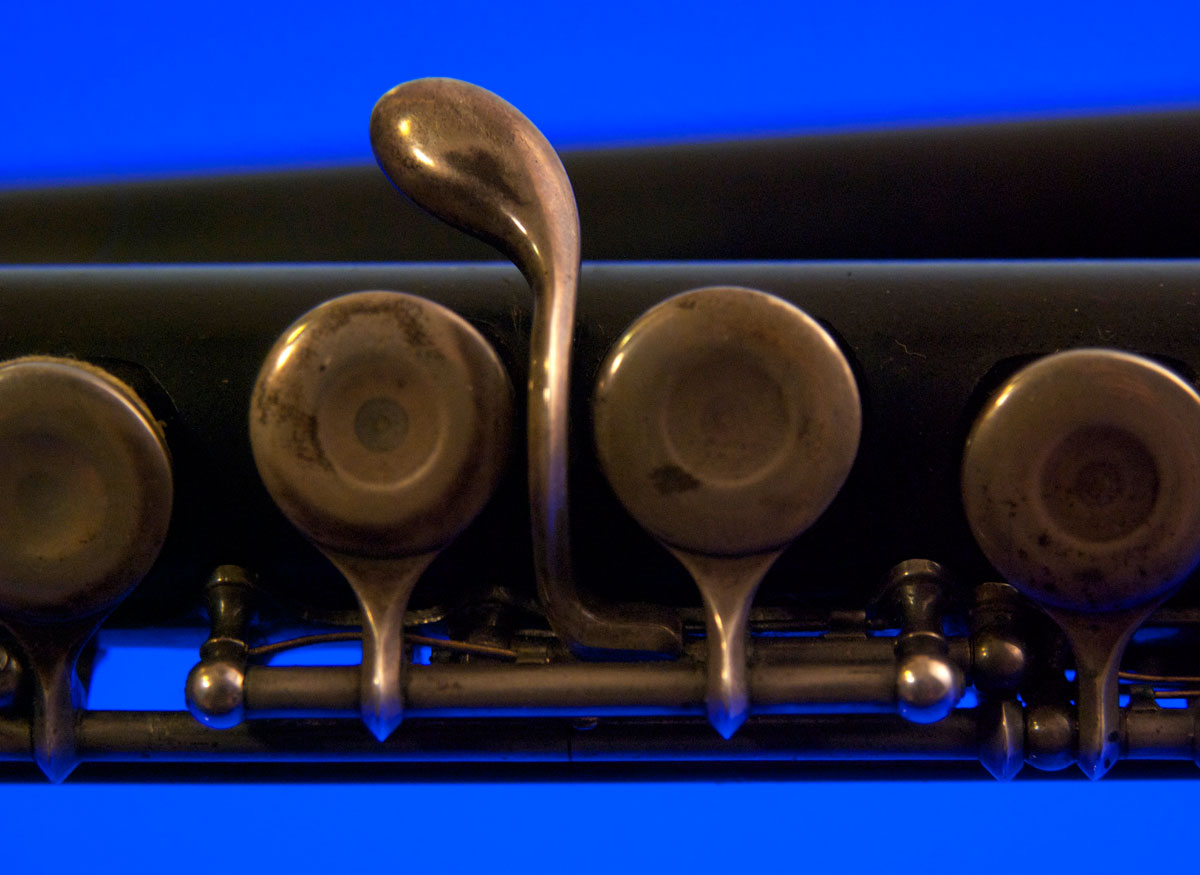 The offset G and G# touch. 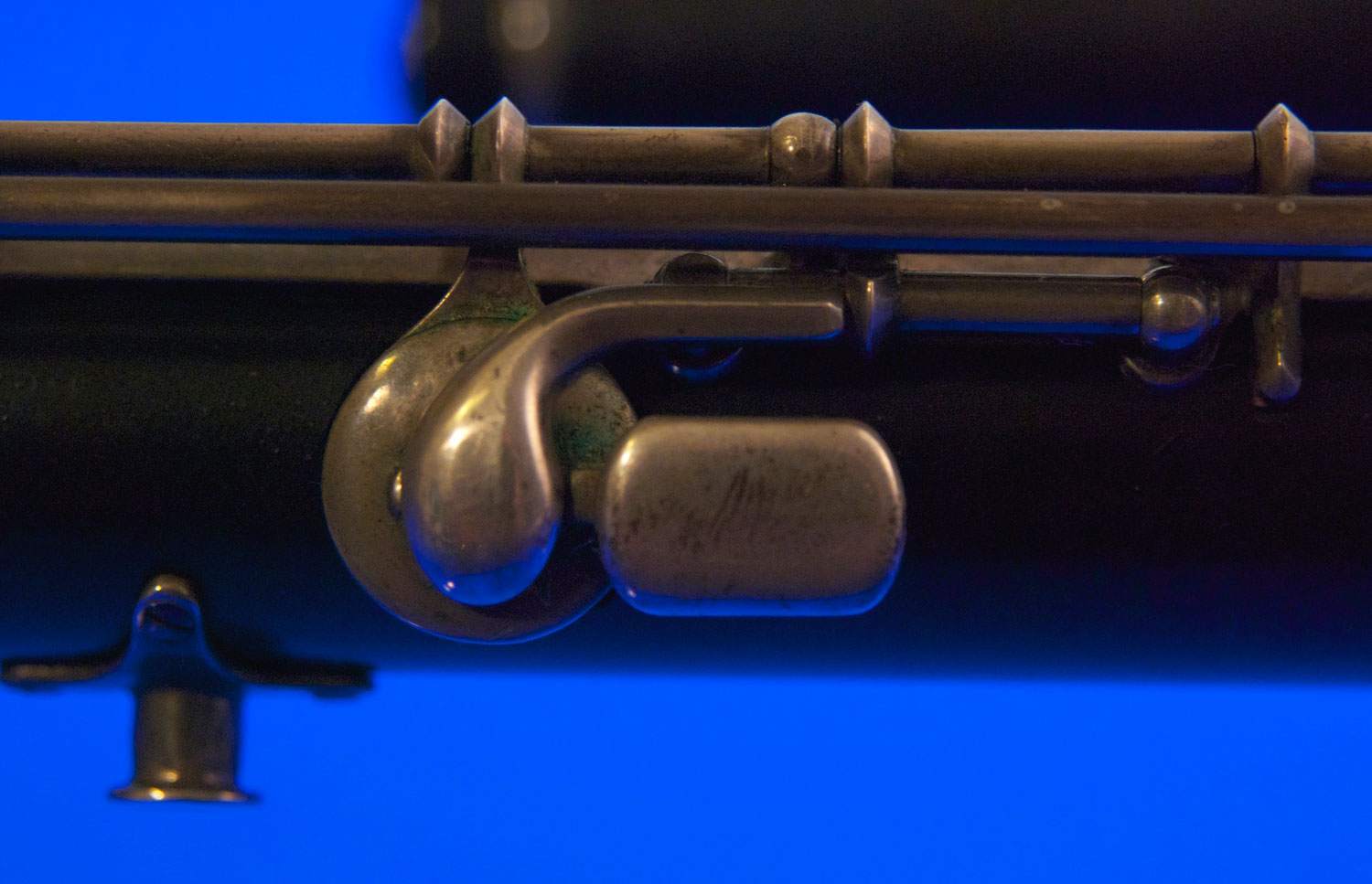 George Haynes has taken a thumb design used by Boehm (and Lot on some ring-keyed flutes) and tweaked it to his own desire. 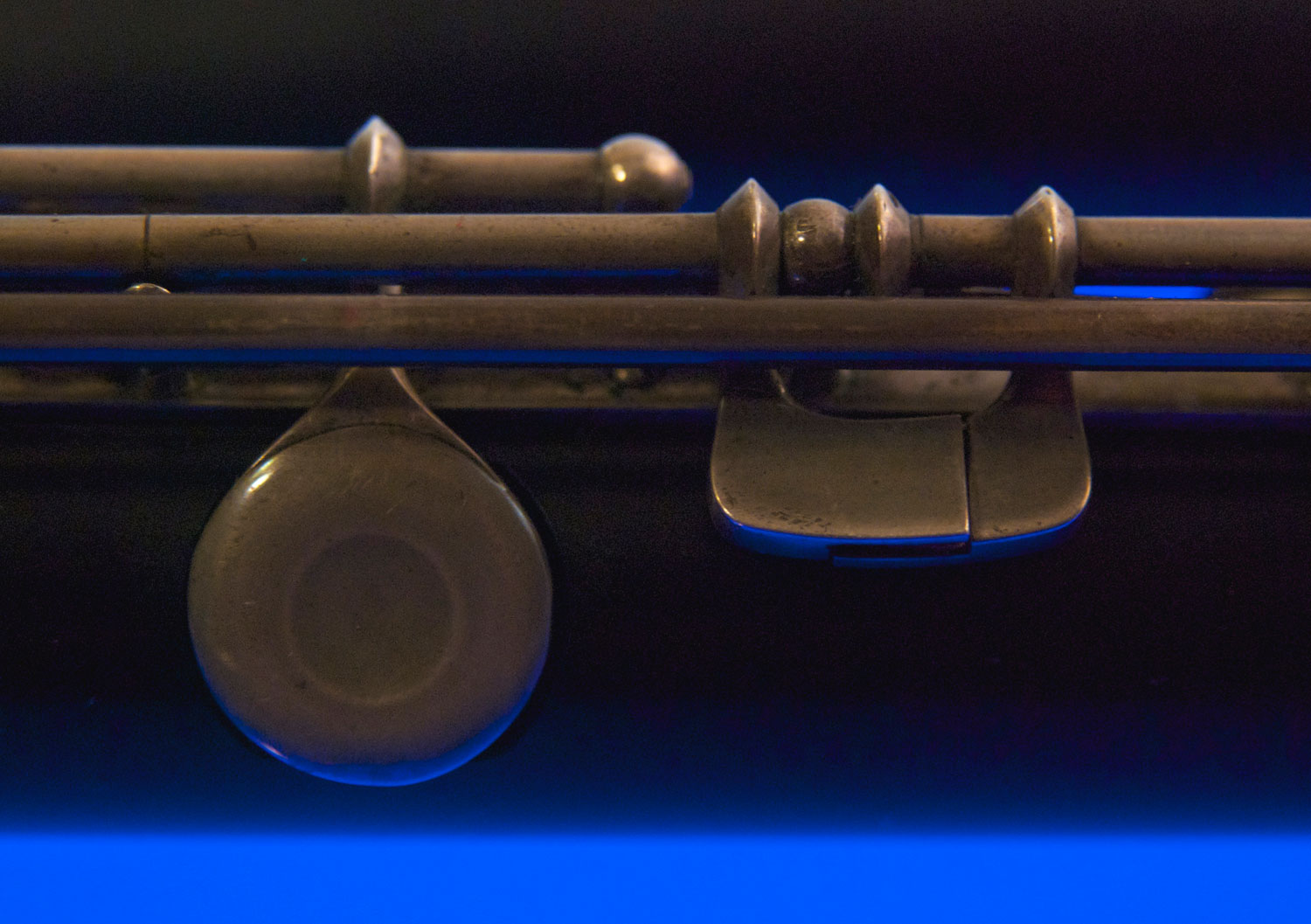 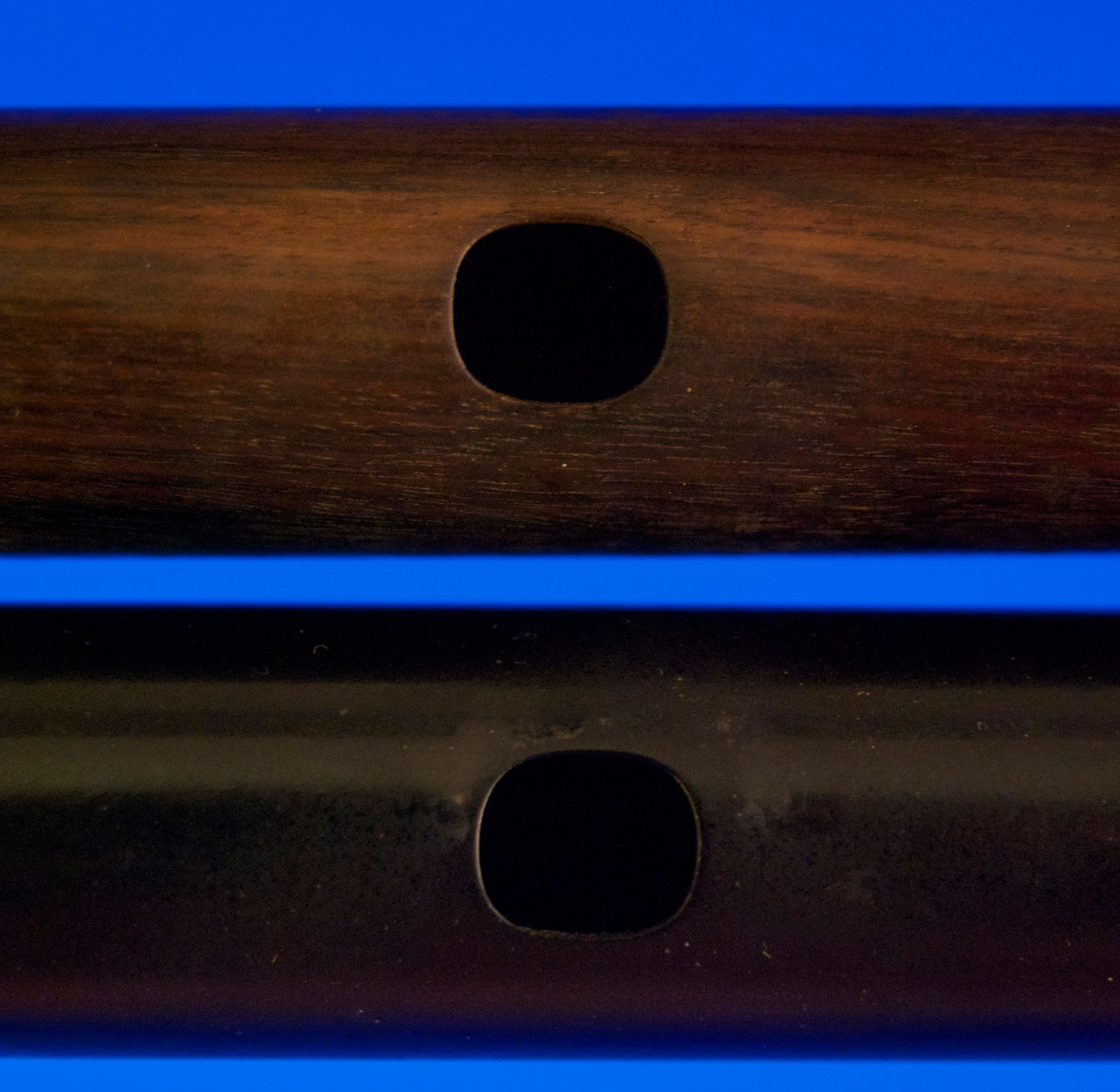 The bottom headjoint is made of the same unique composite material as the body, which has a curious texture not at all like the ebonite of Badger. The top headjoint is of lovely cocus(?) wood. They are just about the same dimensions, suggesting the wooden one was made for tonal differences. 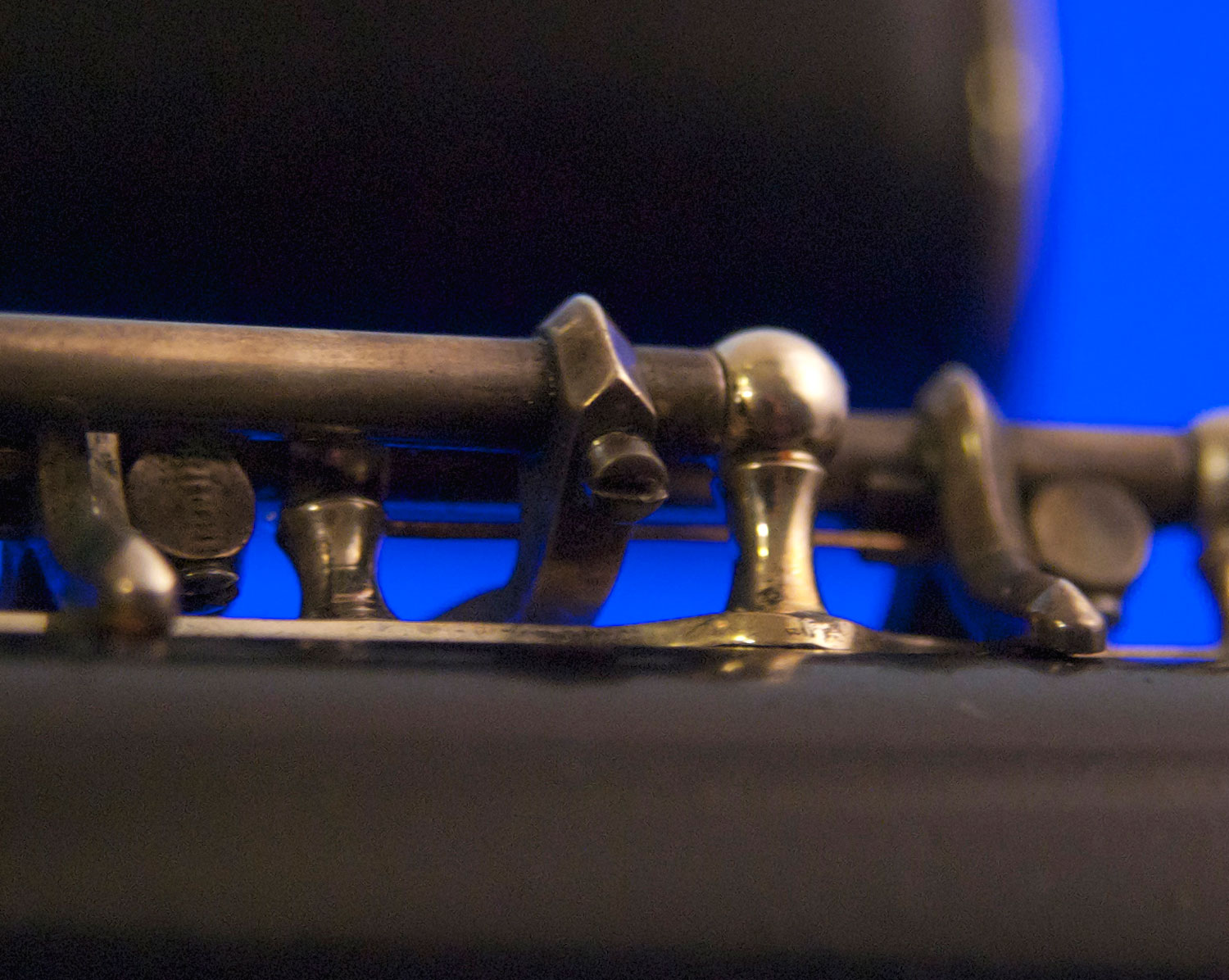 Perhaps the most innovative design feature is the use of screws instead of pins. Here we see the screw-pin for the trill key; the shoulder clutches also have screw-pins just visible on their bottoms. 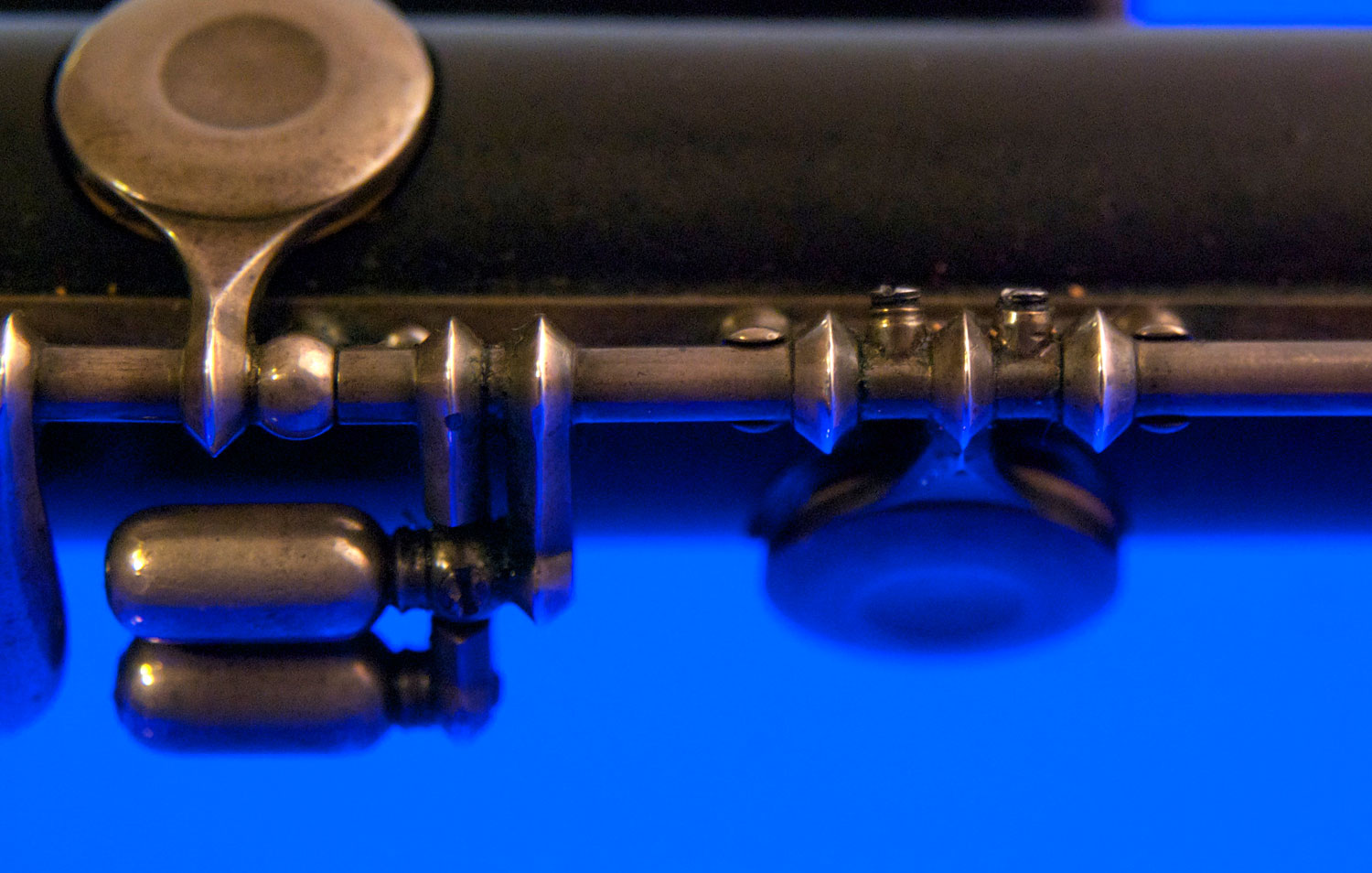 Still following Boehm and Mendler, G. W. Haynes uses the pinned footjoint of Lot, with the unique screw-pins. Buffet and other early French makers used a similar pinning method, but this takes an old idea to a new extreme. 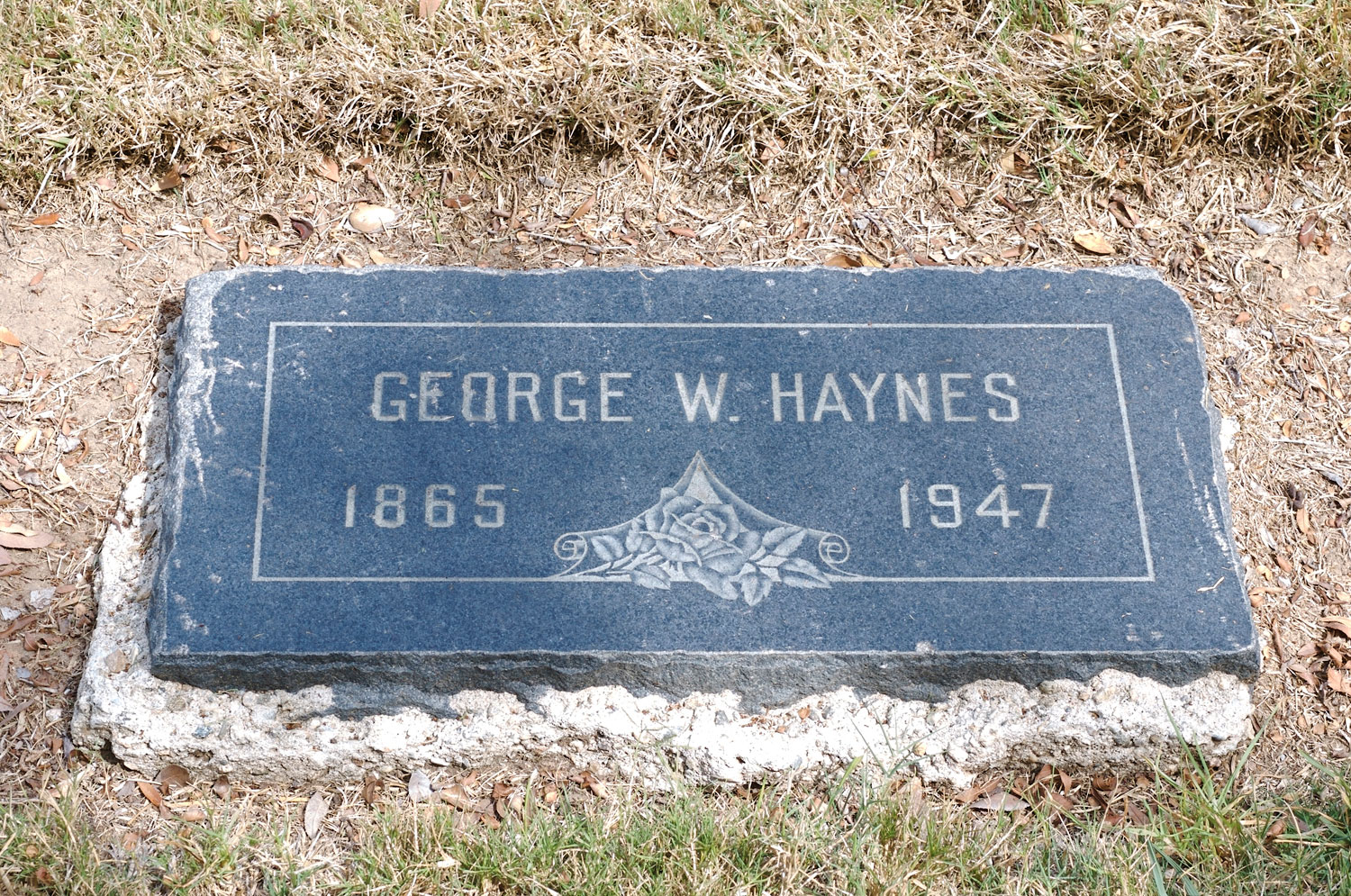 The great American flutemaking genius George W. Haynes rests in the Inglewood cemetery. In the next photo Nina is seen standing next to the Haynes stone. 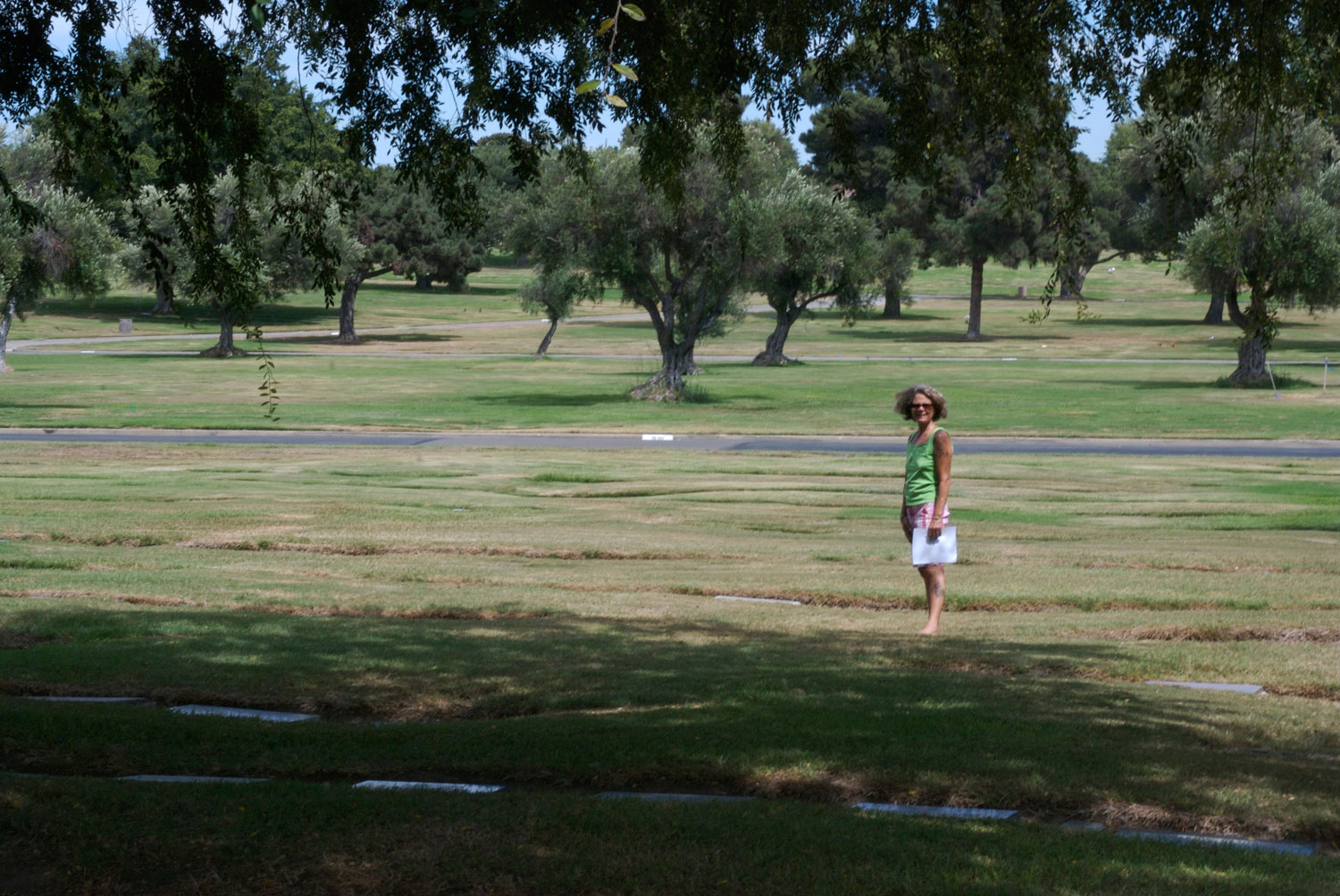 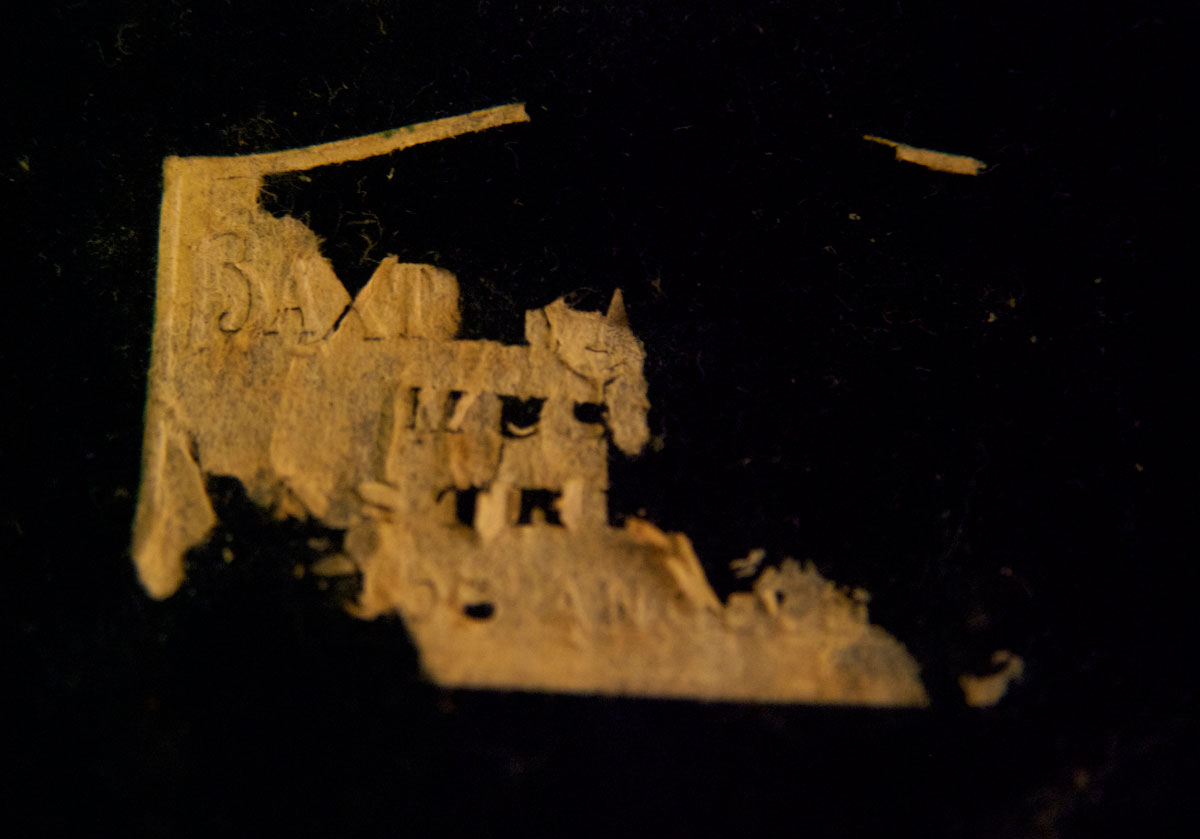 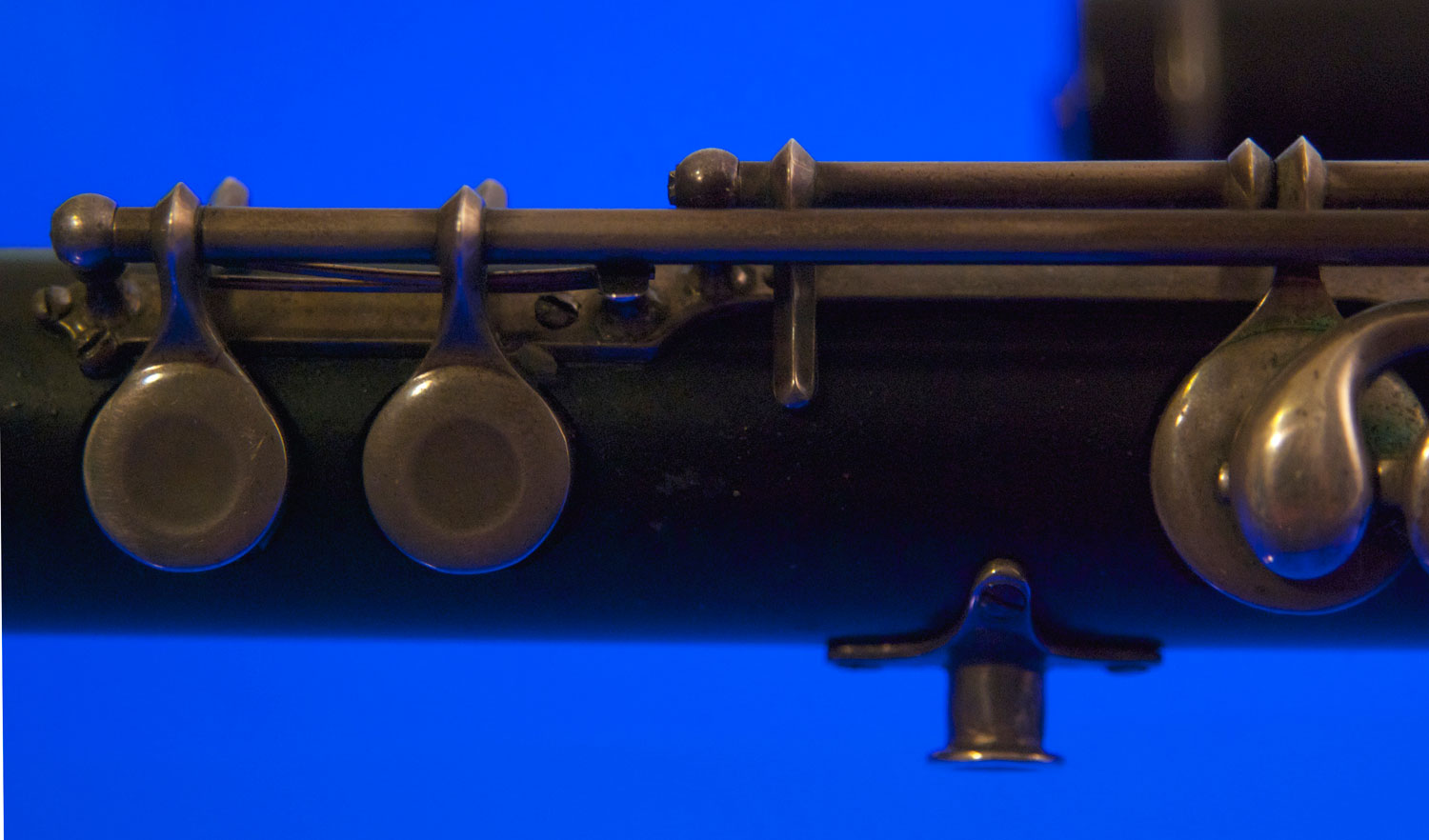 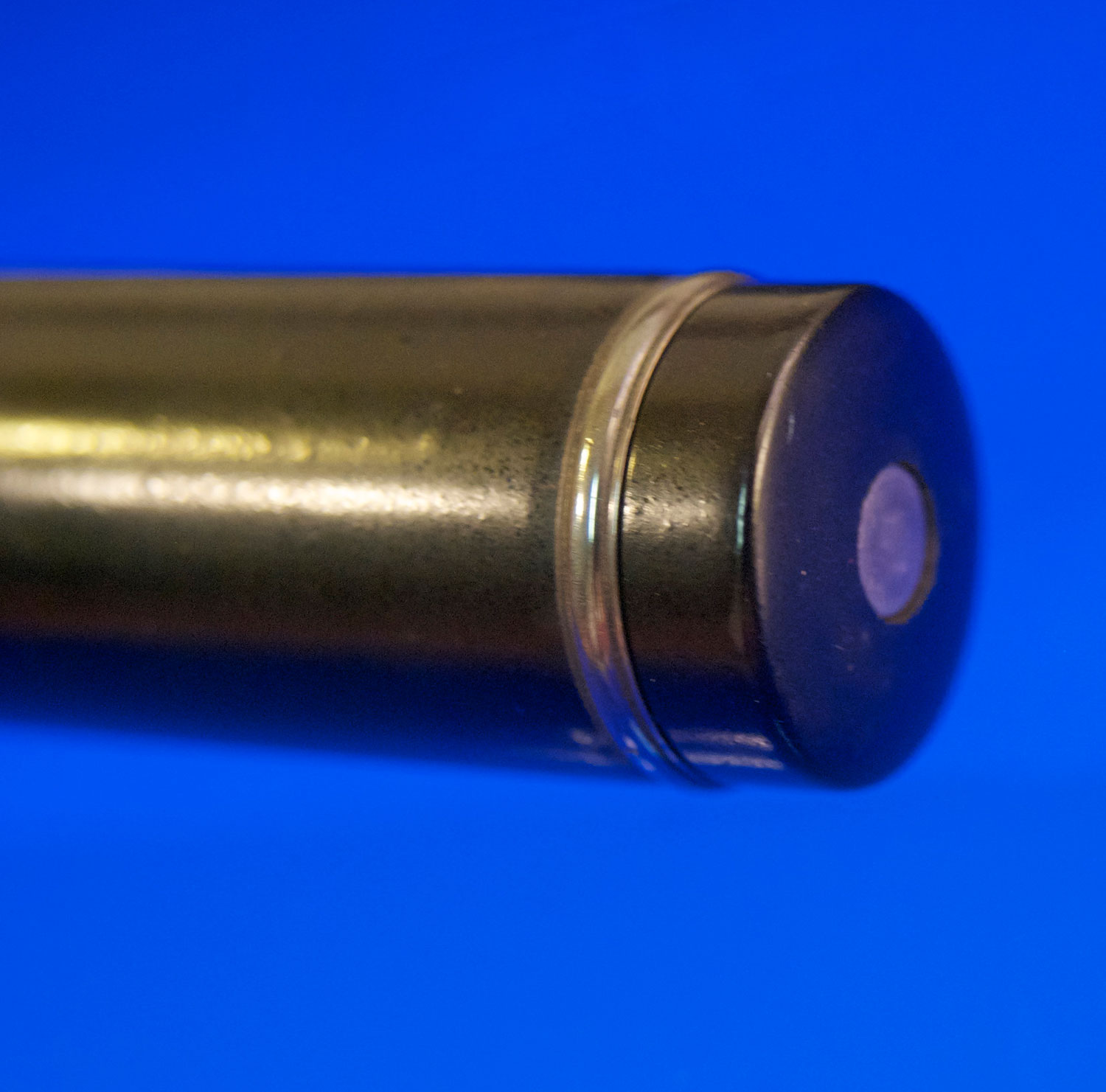 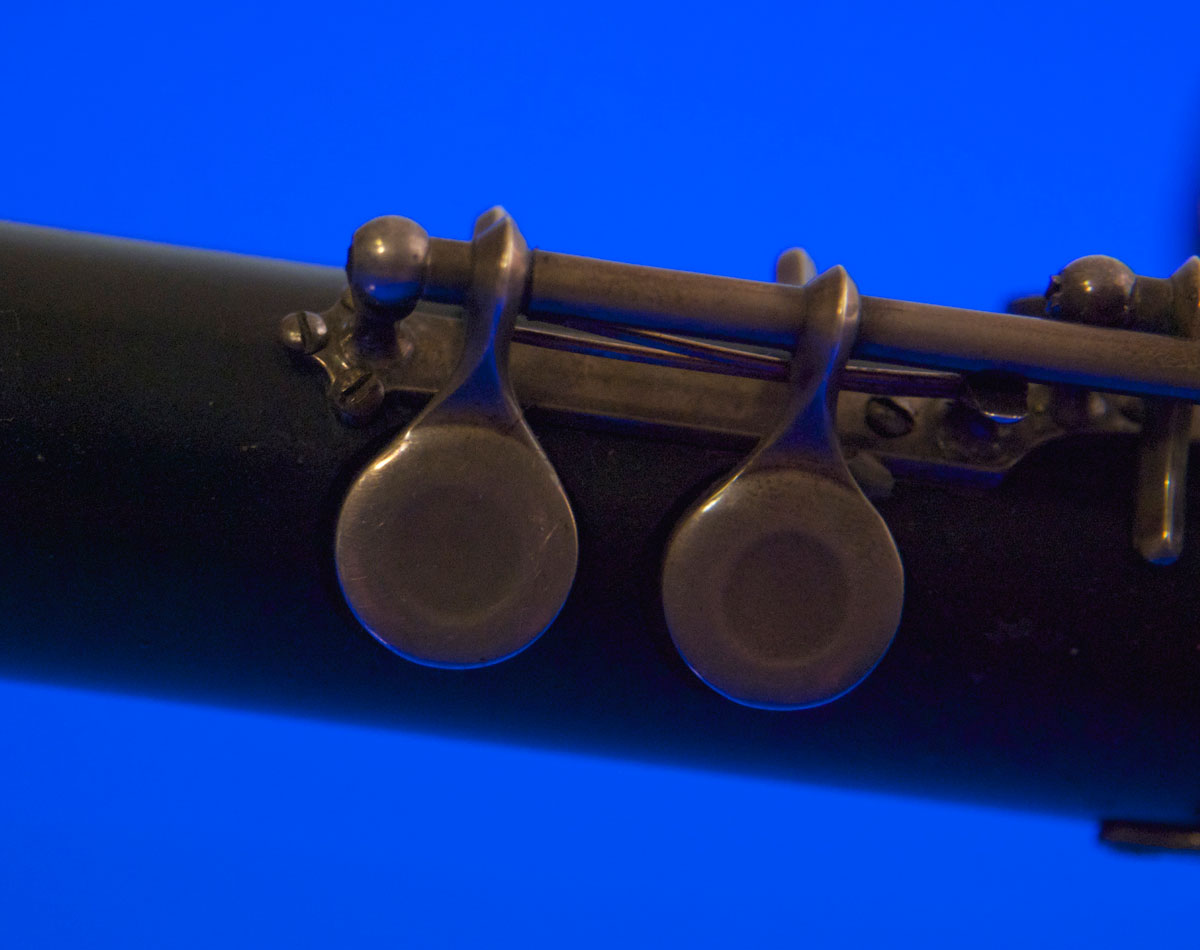 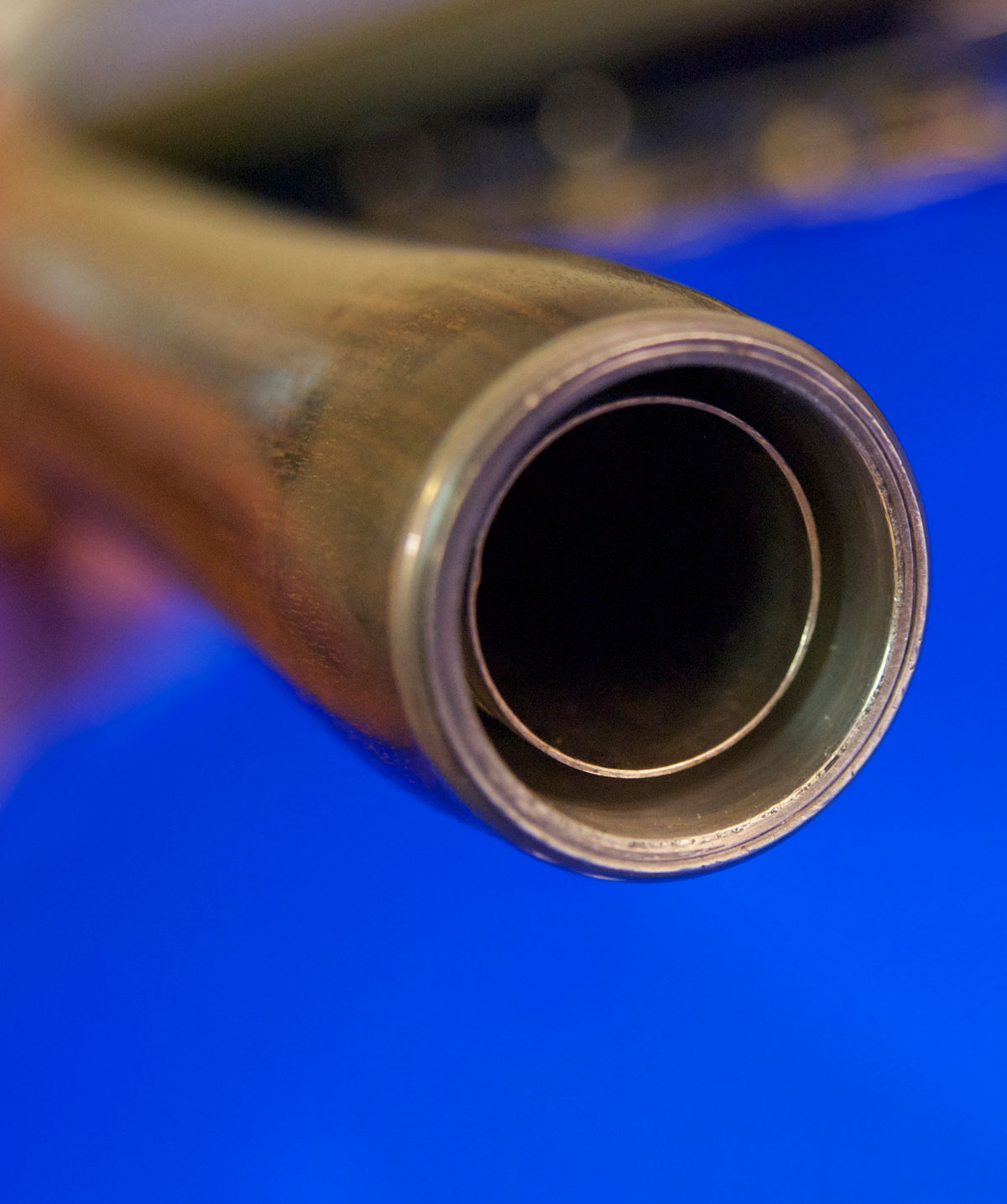 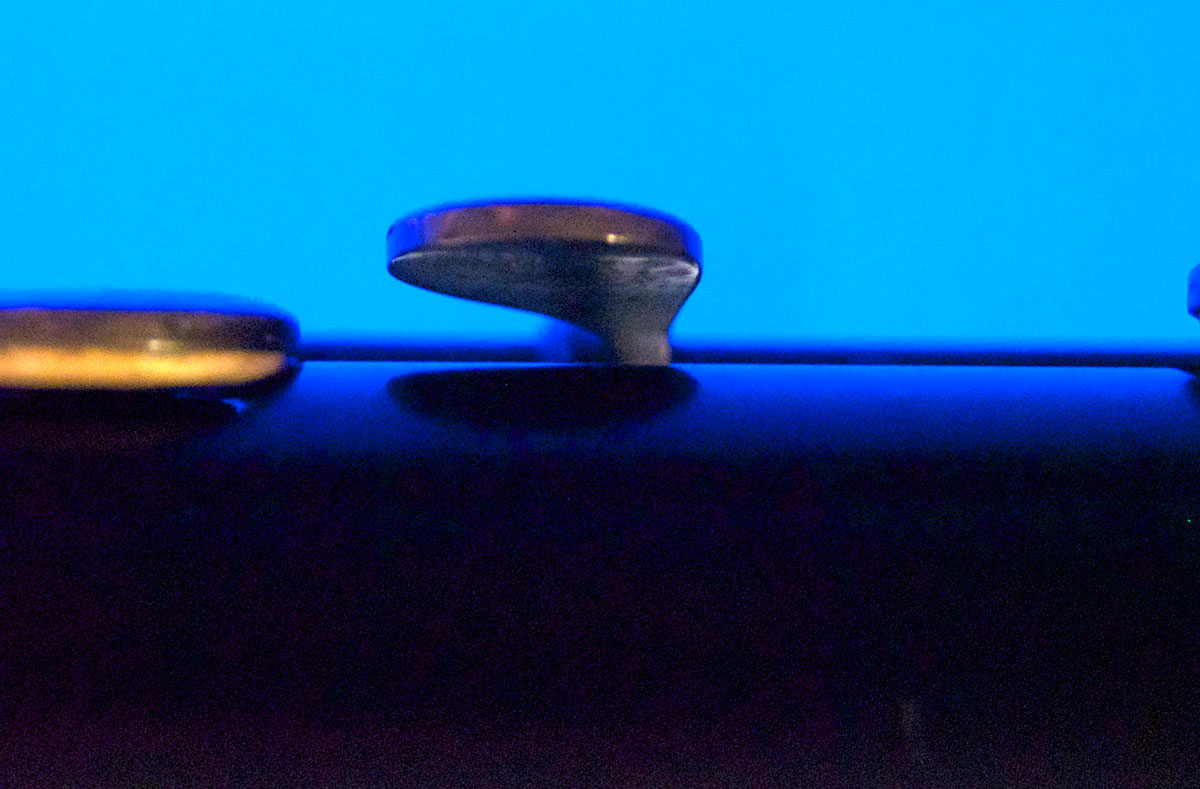 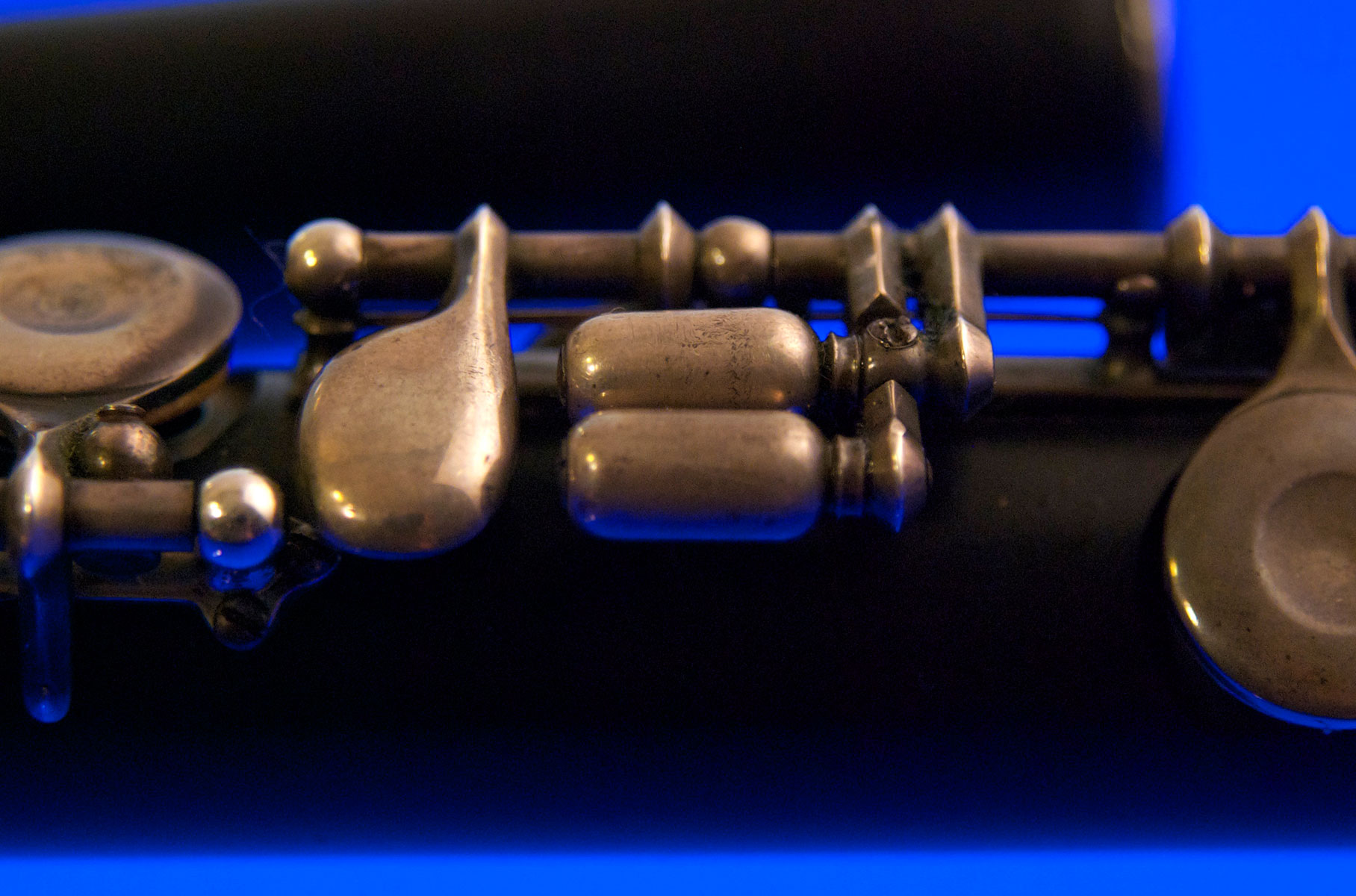