Manufacture Date: Made c. 1939, or after 1945 (Bob Davis, or Susan Berdahl). Selmer's alto flute production began in 1933, after the 1927 move to Elkhart, Ind. Although the flute carries the story of having been made 1939, Susan Berdahl writes that the Model 40 series was developed after 1945. The flute's story also includes the information that only around 25 of these altos were made.

Comments: This was the alto flute of the musician Bob Davis, flutist, saxophonist and clarinetist from Brawley, CA. After gigs with S. Zentner and Les Brown, he joined the Lawrence Welk music makers in the woodwind section in 1965, peforming with Dave Edwards, Russ Klein, Orie Amadeo, Peanuts Hucko and Henry Cuesta. Bob also has done night clubs and had his own seventeen piece orchestra, "Bob Davis and the Prime Time Orchestra." Today, he makes his home in Fort Pierce, Florida with his wife Ellen, who is also a big band vocalist with his orchestra. (from http://bandeorch.com/home.htm) Bob Davis purchased this flute while playing studio work in Los Angeles in the 1960's. He mentioned that there were three of these rare Selmer altos being used in the studios at the time; Selmer Alto #105 played by Skeets Herfert, #106 by Luella Howard, 1st flute at 20th Century Fox Orchestra, and, next to Luella, Bob Davis with this flute, #107. For seventeen years Bob Davis played with the Lawrence Welk Orchestra, and any of the color TV shows featuring him on alto flute would have been on this instrument. As a flute, this instrument is highly unique, with very creative design decisions. The right hand uses an overlapping spade, which is cut in a stylized arrowhead or bow tie design that dominates the visual of the instrument. The rear shows the "sea-saw" clutch also used by Rudall Carte. The G# is actually a full Dorus key, with one hole for the note. This flute has the full, rich tone of the early 20th century American school. This instrument is an historical piece with unique and attractive design elements with a great story, and is a functioning alto flute as well, ready for more life and music-making.

System: Alto flute with "C" foot. Dorus (closed) G#. Keywork designed for maximum balance, with high left hand. This flute has a wonderful system of clutches and extenders to make the alto flute mechanism work. Apparently Philip Marcil was working for Selmer at the time this instrument was made, and rumor has it that he used George Haynes' tools for these flutes, although this would be unlikely yet highly interesting.

Condition: This flute was used regularly on the Lawrence Welk show from 1962 to 1984, as well as on the Bob Hope world tours, and it remains in excellent condition. The embouchure displays a touch of taper at the side edges which looks more recent than the 1930's, and was added after-market. 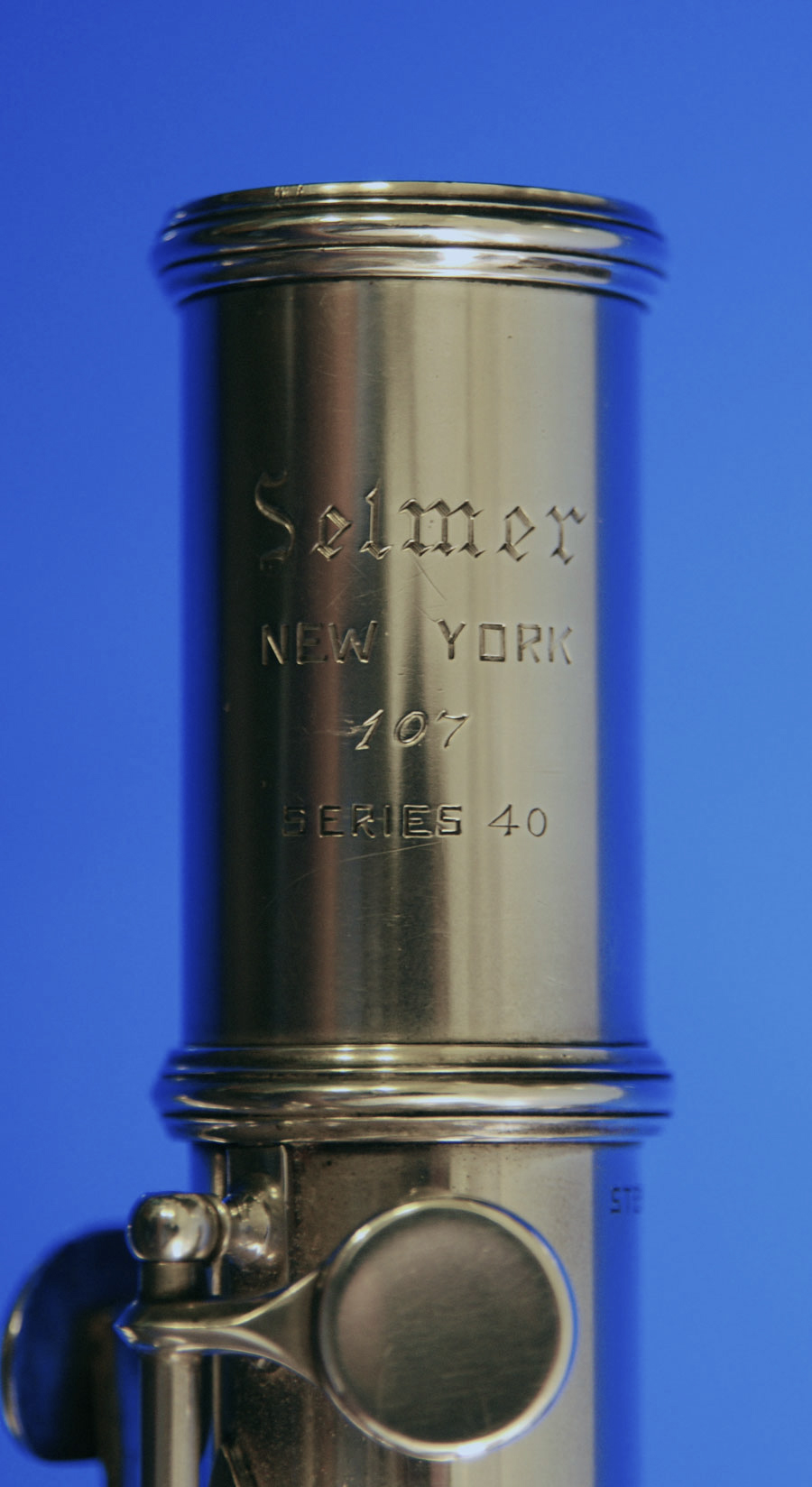 In the early 1960's Selmer alto flutes #105, 106, and 107 were all being played in Hollywood orchestras. Scholars differ over whether these flutes were made in 1939, as the owners have suggested, or just after 1945, per Susan Berdahl.

Here we see the "bow tie" clutches connecting the F-F# on the right, the Dorus G# in the middle, and the A-Bb on the left. The G# key is sprung closed, and the bow tie actually holds it open against the stronger open spring on the G. When the G is closed, the G# goes with it, and in turn is opened by the G# key. 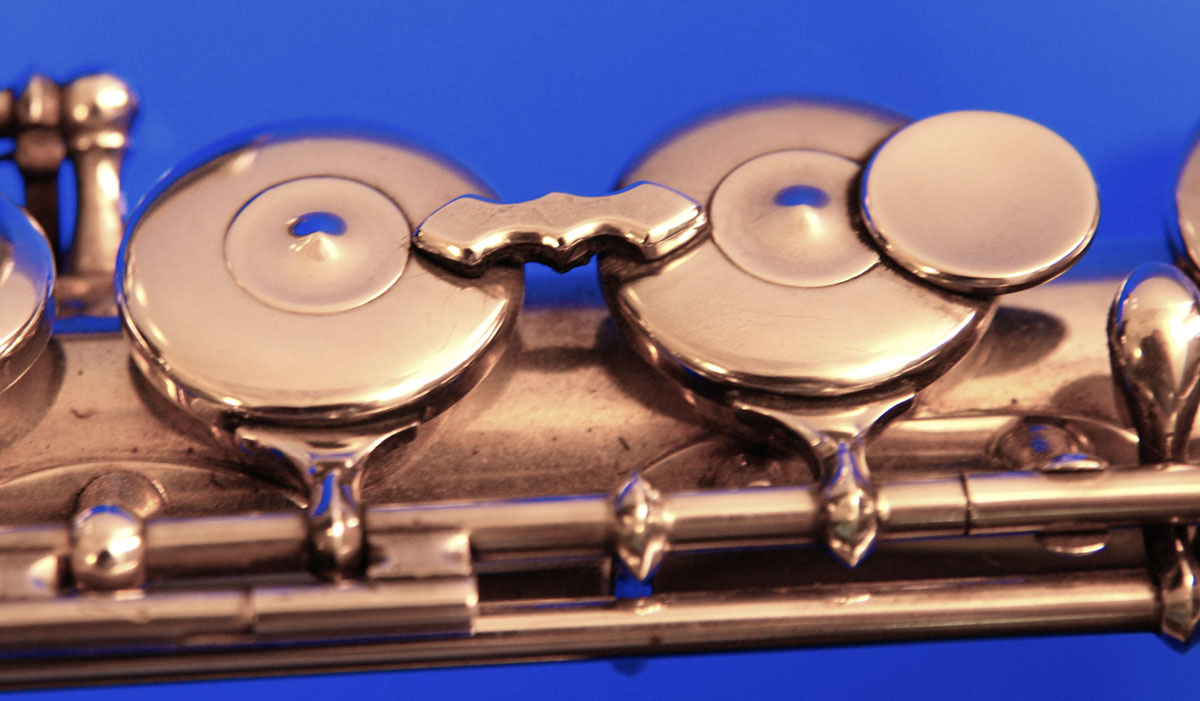 This elegant little bow tie is essentially a spade clutch, connected to the key on the right and leaning on the key to the left (for an F), which can then go down without the right-hand one, for an F#. 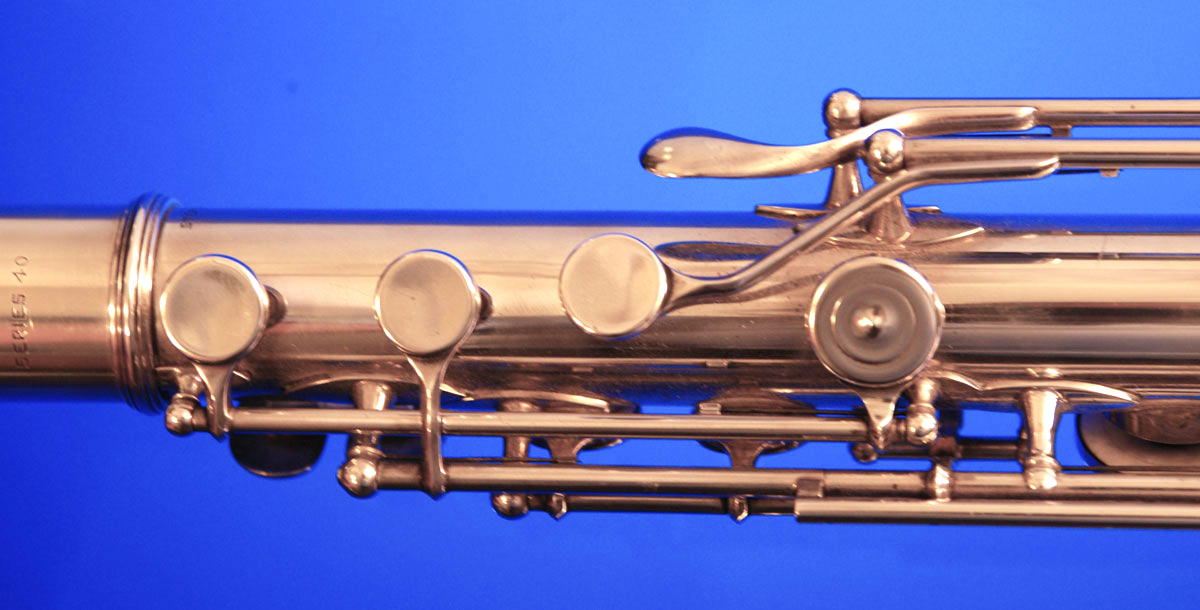 The left hand mechanism, with the flying G's. Philip Marcil has created an elegant solution to the problem of extending the left hand to a reachable position.

Here we see the full left hand, with the wonderful thumb key mechanism. Did Philip Marcil come up independently with the seesaw clutch, also used on the Rudall Carte altos? 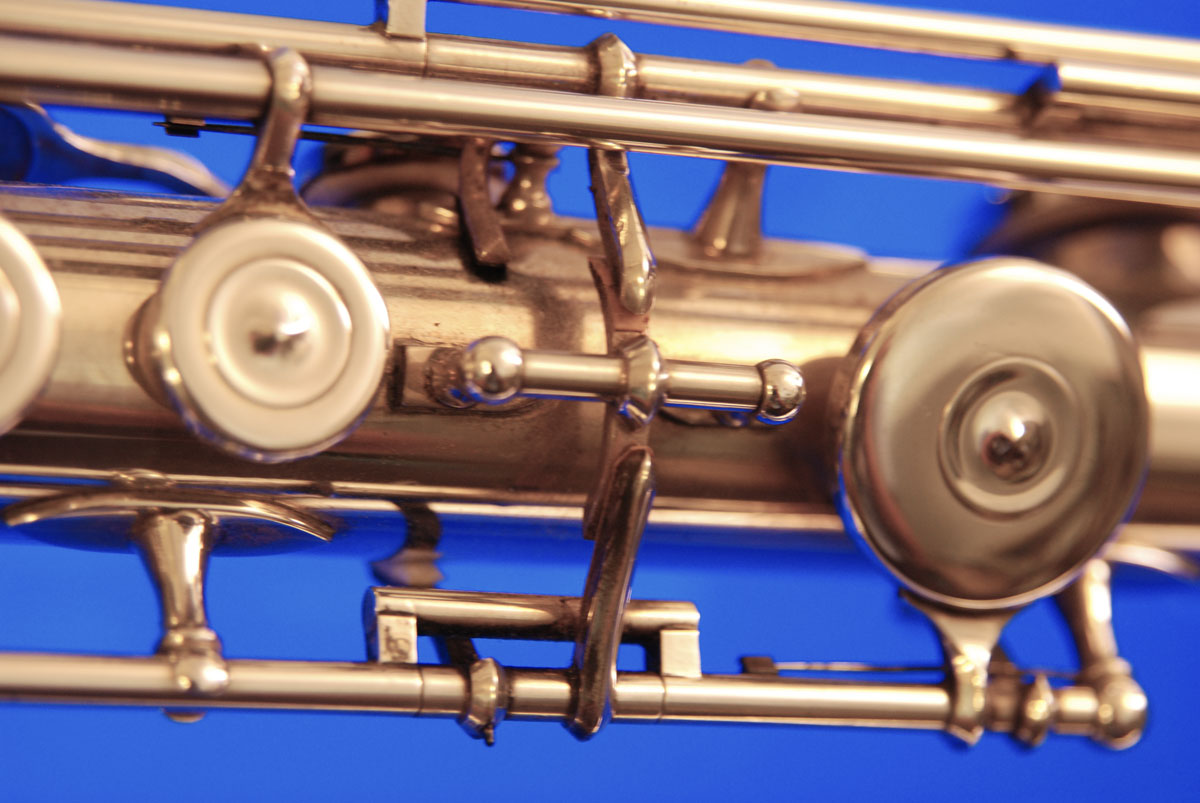 Here is a close up of the Marcil seesaw, which allows the upper thumb key to close the Bb hole on top of the flute, while allowing the C to be closed via a loop (not a clutch) passing underneath. 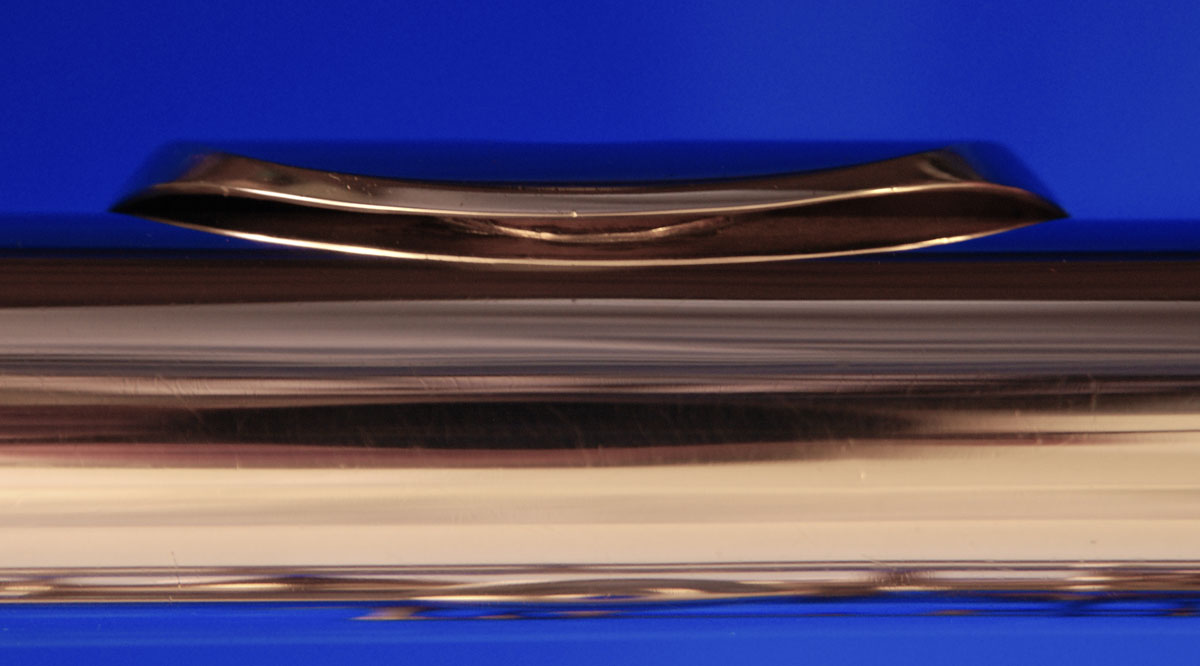 The lipplate is quite large, and is soldered to the tube in front. Here at the rear we see the flange, made in typical European style.

The full flute in the case is really a remarkable sight. The bowtie clutches, the flying G's, and the seesaw Bb give a stunning visual for this flute, as seen for 17 years on the Lawrence Welk show! 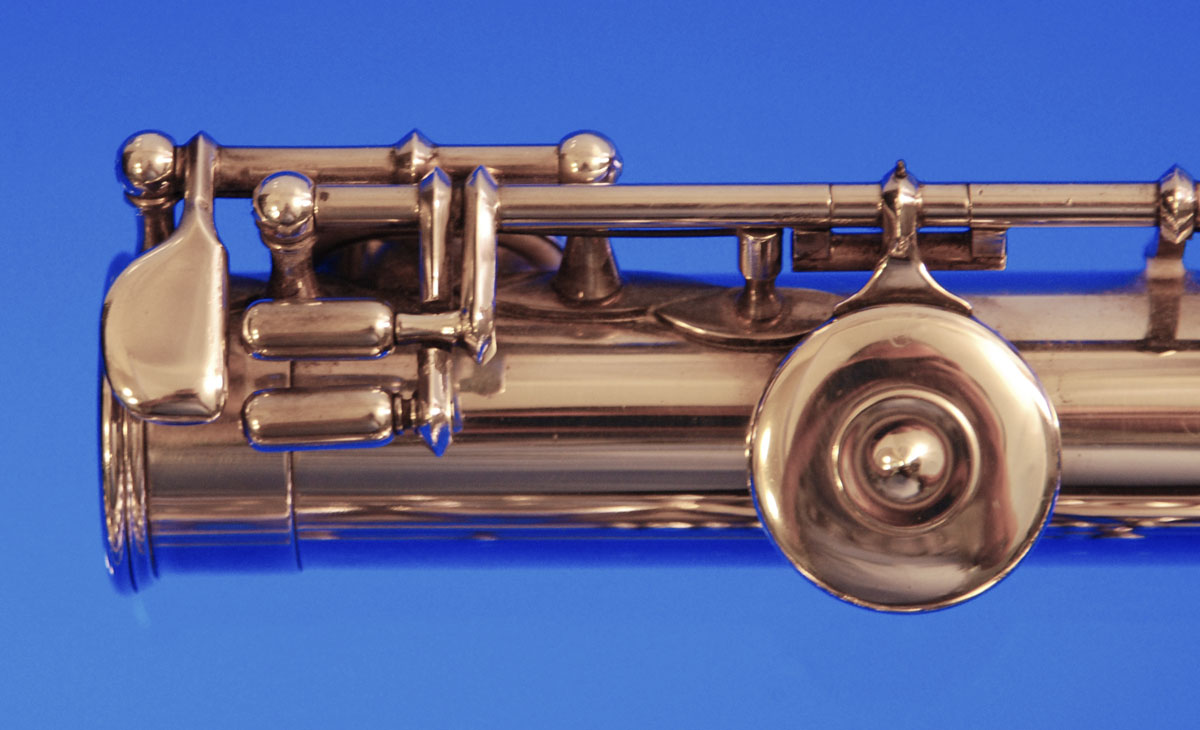 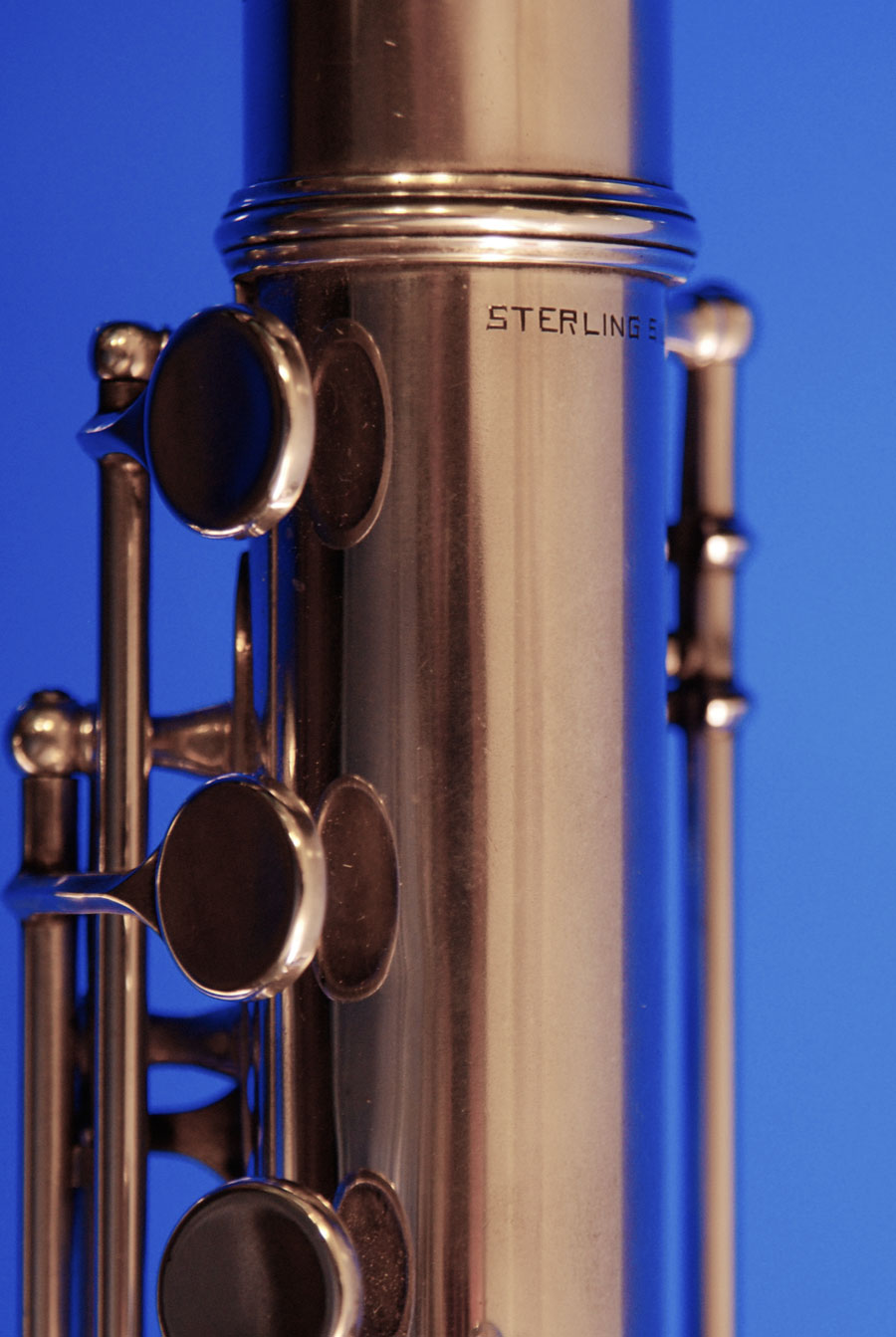 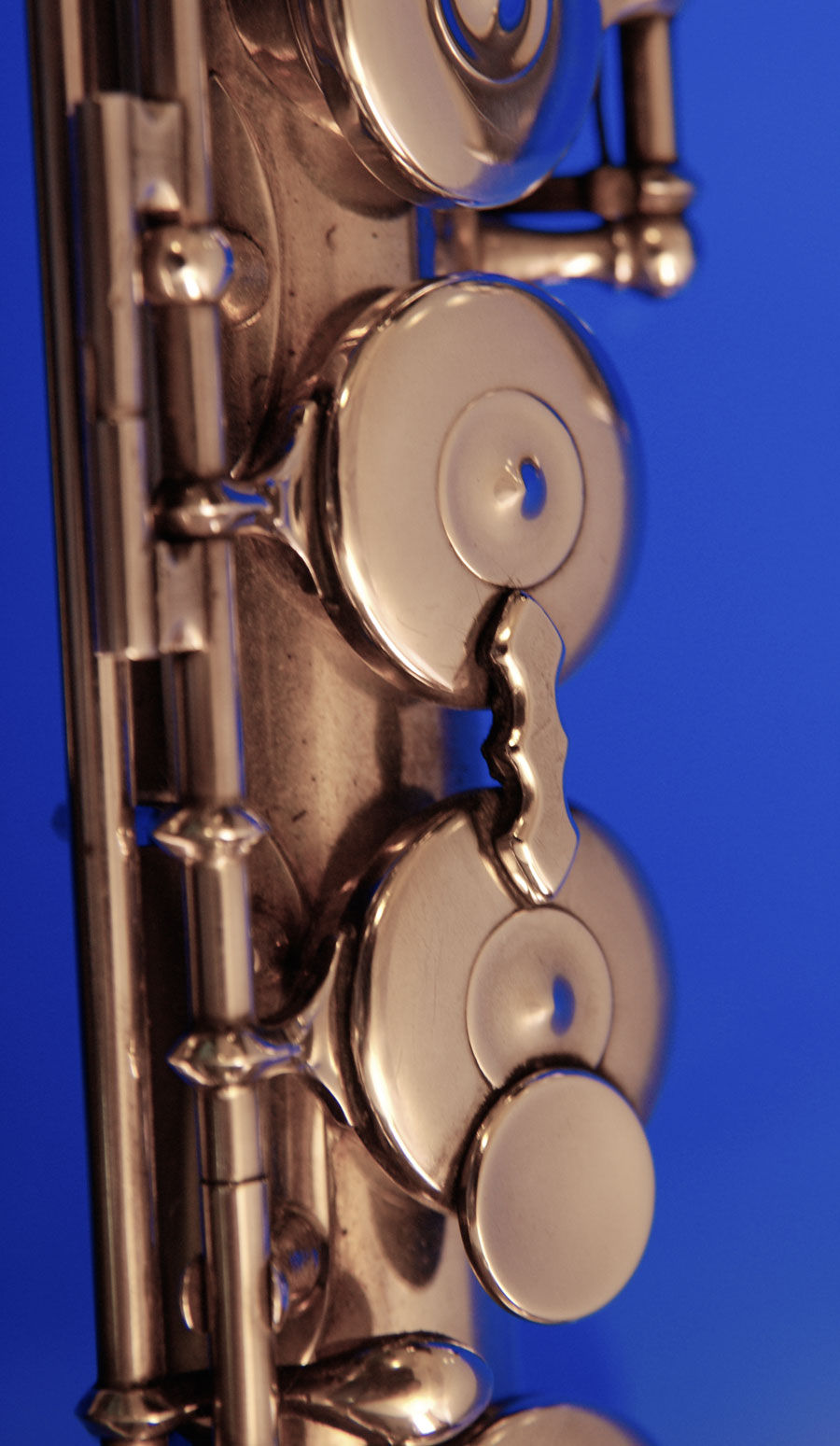 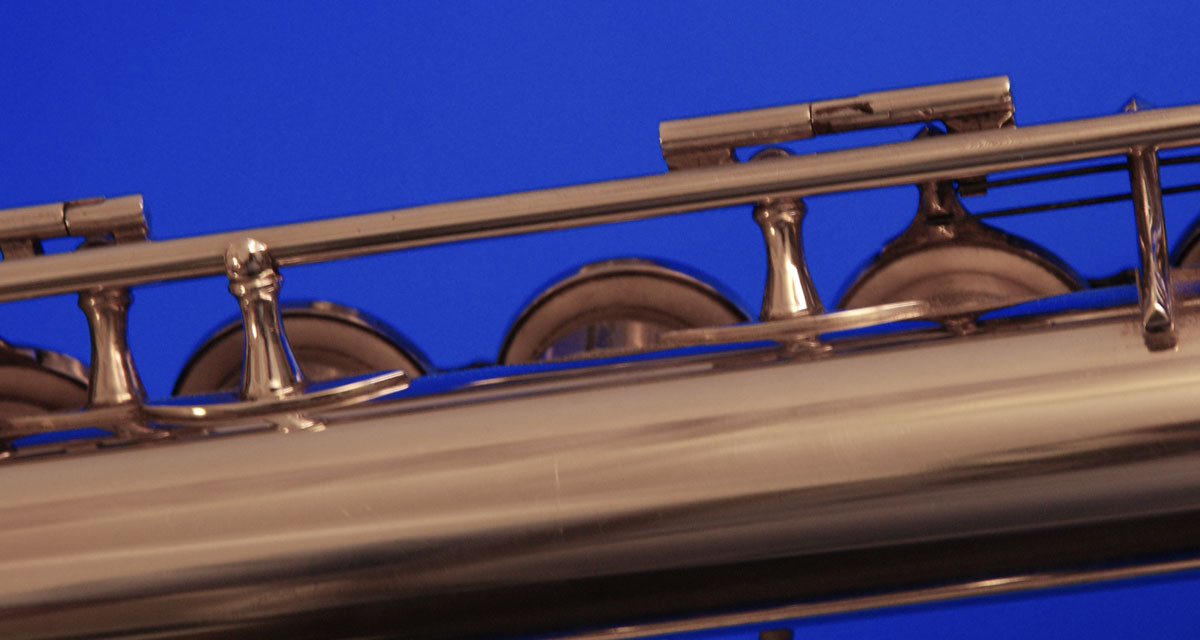