Comments: According to the Powell register, this flute was made on Dec. 15, 1944, for Byron Hester (Houston Symphony 1953-1990). It is a "Hand made French low B .018 gold embouchure". This is a heavy wall flute, at 0.018" for the tube thickness. This flute was later owned by Thomas Howell (author of The Avant-Garde Flute: A Handbook for Composers and Flutists (Berkeley and Los Angeles: University of California Press, 1974). Powell's book shows it was later owned by Gerald Carey (Gerald Carey is principal flute of the Quad City Symphony. Formerly he was principal flute of the Milwaukee Symphony Orchestra, the New Orleans Summer Pops Orchestra, the Eastman Symphonic Wind Ensemble (under the direction of Frederick Fennell) and the Eastman Philharmonia (under the direction of Howard Hanson). Gerald Carey sold it to Gary Schocker (Gary Schocker is the most published, and one of the most loved of living flutists). According to Gary Schocker, who often represents Powell flutes at festivals, this is the finest Powell he has ever played. Gary Schocker used this very instrument last year at the Falaut Festival in Italy as a representative of Powell Flutes. A You Tube video of this performance, which is a lovely, rich, sweet, and melodic performance, can be heard at: http://www.youtube.com/watch?v=1kaN6ORjbqE&feature=email From an historical perspective, it is clear that Powell took substantial inspiration from the Louis Lot flutes of Chambille, such as the instrument illustrated here : http://www.antiqueflutes.com/cgi-bin/catalog.cgi?snum=868. This flute has the typical Powell scale on the body (226 mm C# to E holes), which is a mere one millimeter shorter than the Louis Lot body scale of 227 mm. Through some miracle of engineering, the flute plays a tad higher than A=440, so the headjoint needs to come out a millimeter or two for A=440. The tone and scale seem to be built for a forward leaning embouchure, with air blown down at the leading edge, but other flutists may well find otherwise. Compared to the Lot this flute was patterned after, the instrument has transformed from an enclosed system whose volume depends on expanding the defined parameters of the pianissimo, to the modern flute with a far more open prospect, whose piano is achieved by reining in the escaping sound. This instrument achieves a very happy medium between the flutes of Lot, and the modern instruments of today. The compromise between warmth and tone on the one hand, and expansive volume on the other, has been very nicely achieved. This flute is a masterpiece of tone.

Material: Made of silver with gold lipplate and riser (silver flange). Gold springs.

System: This is a handmade French model flute, with B foot. The trill is to Bb.

Condition: This instrument is in excellent original condition, with signs of considerable usage. The embouchure is clean, and there are no signs of abuse or damage. A few scratches on the G hole key appear to be caused by friction in the case with the low C# touch. The principle sign of usage is inside the right hand mechanism, where there is some wear on the male side at the bushing entrance.

Pitch: This flute appears to have been built to play at A=440-442. The scale, of course, more closely resembles Louis Lot than it does the modern Powell flutes.

Case: In hand made wooden case by the famous casemaker Harold Jeter. 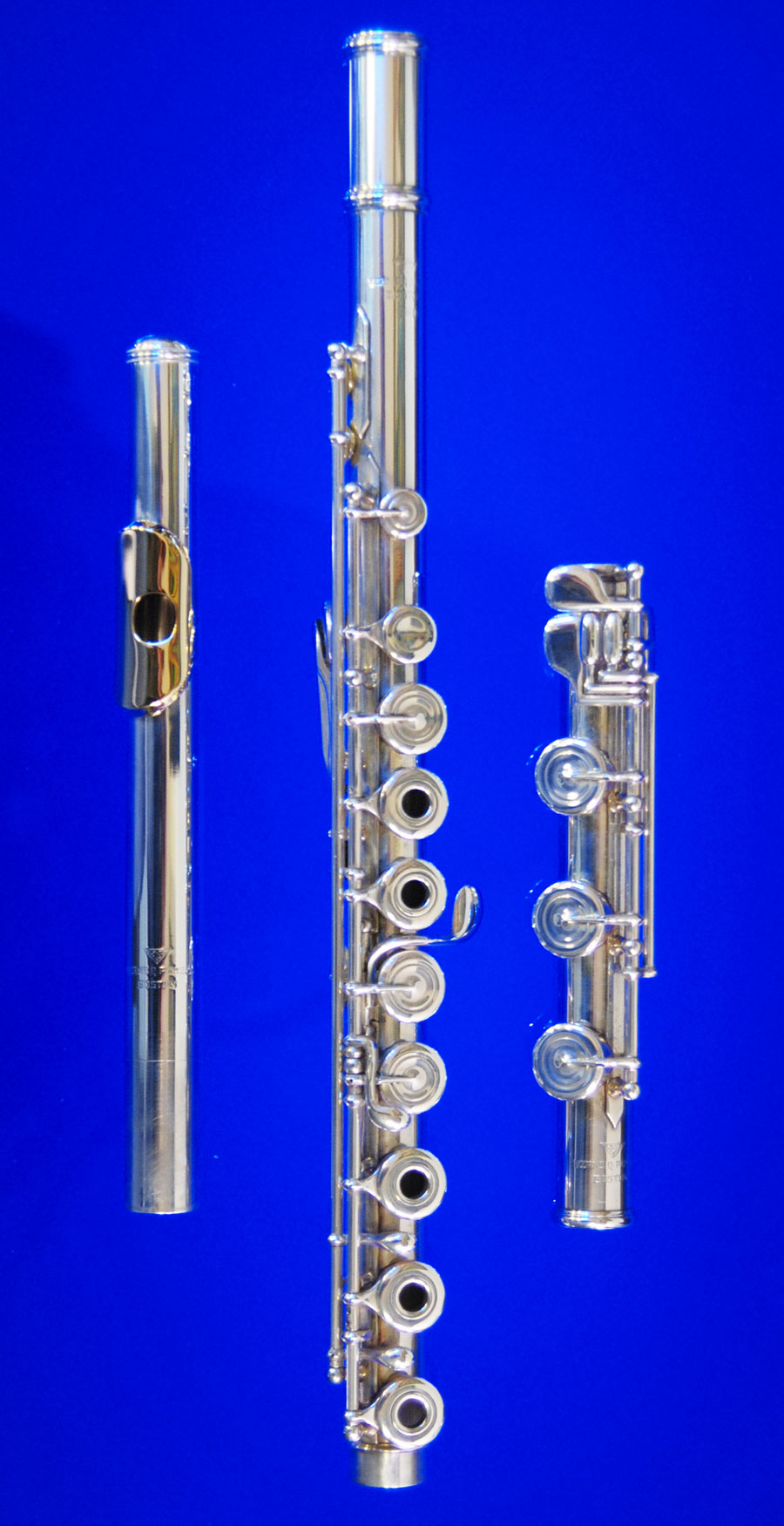 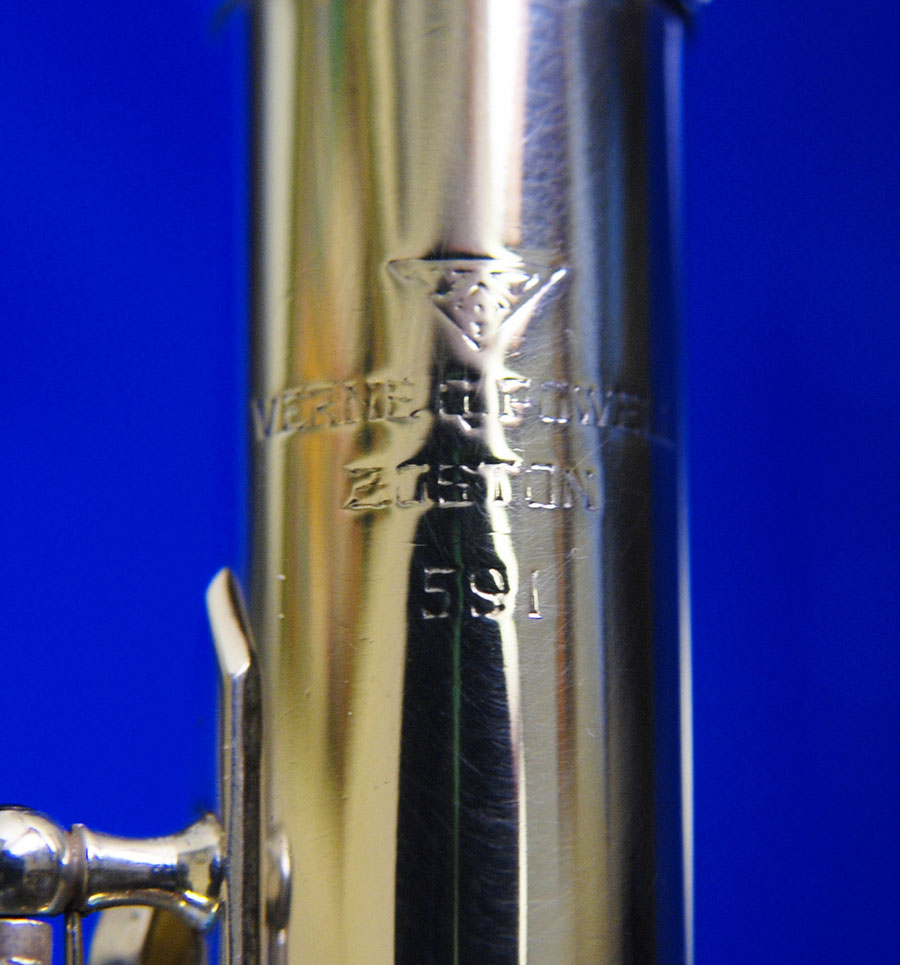 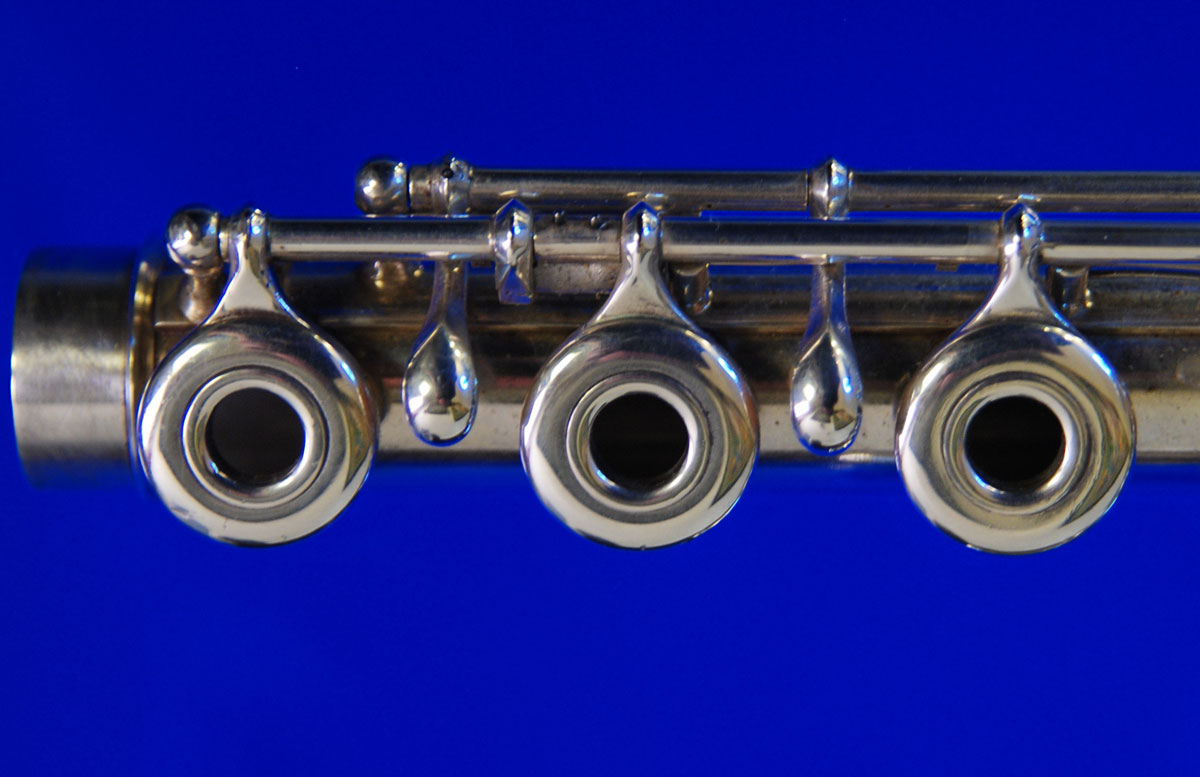 Powell's own flutes show the Louis Lot aesthetics. He also uses the broad T of Chambille. 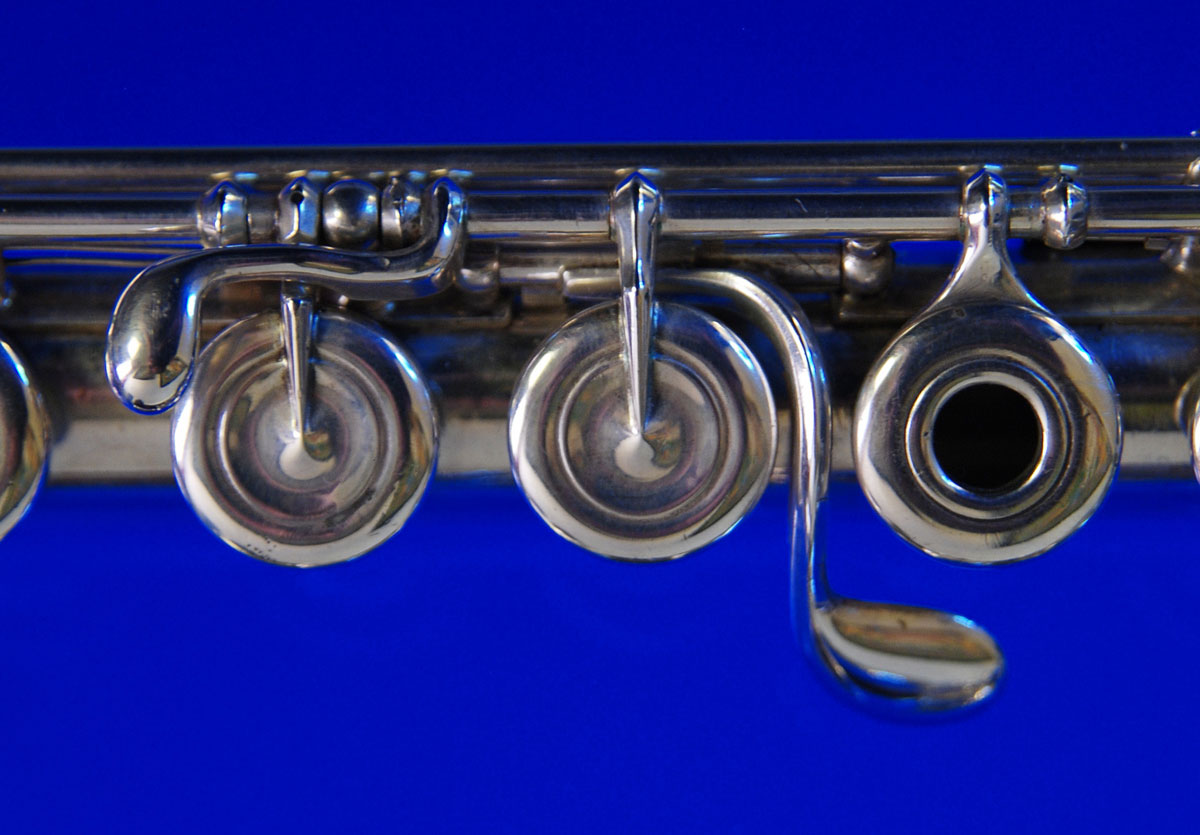 Powell's curves are gracious and elegant. The Bb trill appears slightly smoothed from use. 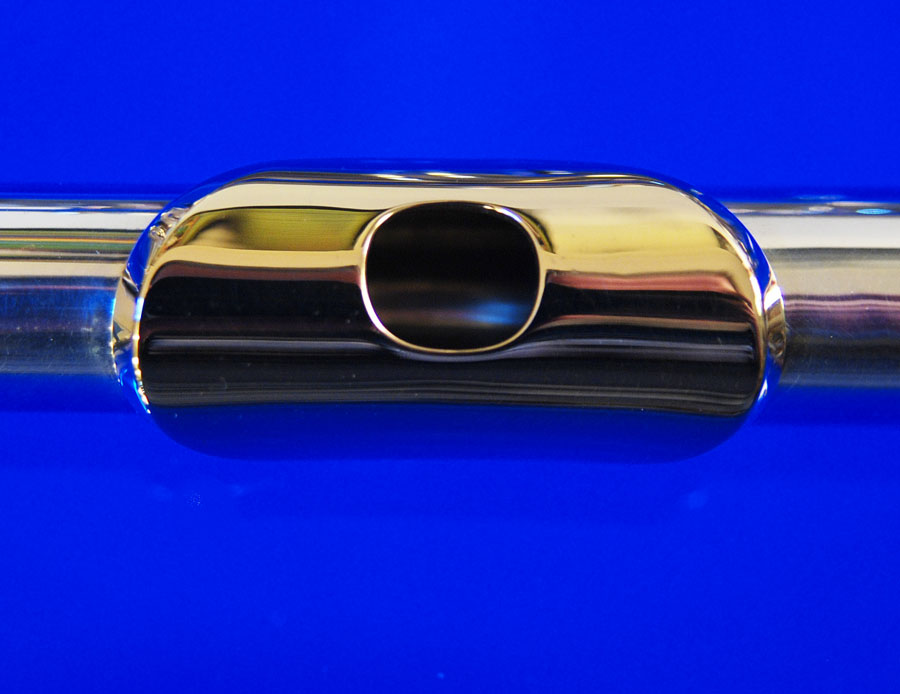 The beautiful gold lipplate carries an unusually large embouchure (by yesterday's standards), at 12.23 x 10.57 mm. With the heavy .018 wall, this flute has a commanding and rich presence. A video of Gary Schocker playing this flute can be heard at You Tube: http://www.youtube.com/watch?v=1kaN6ORjbqE 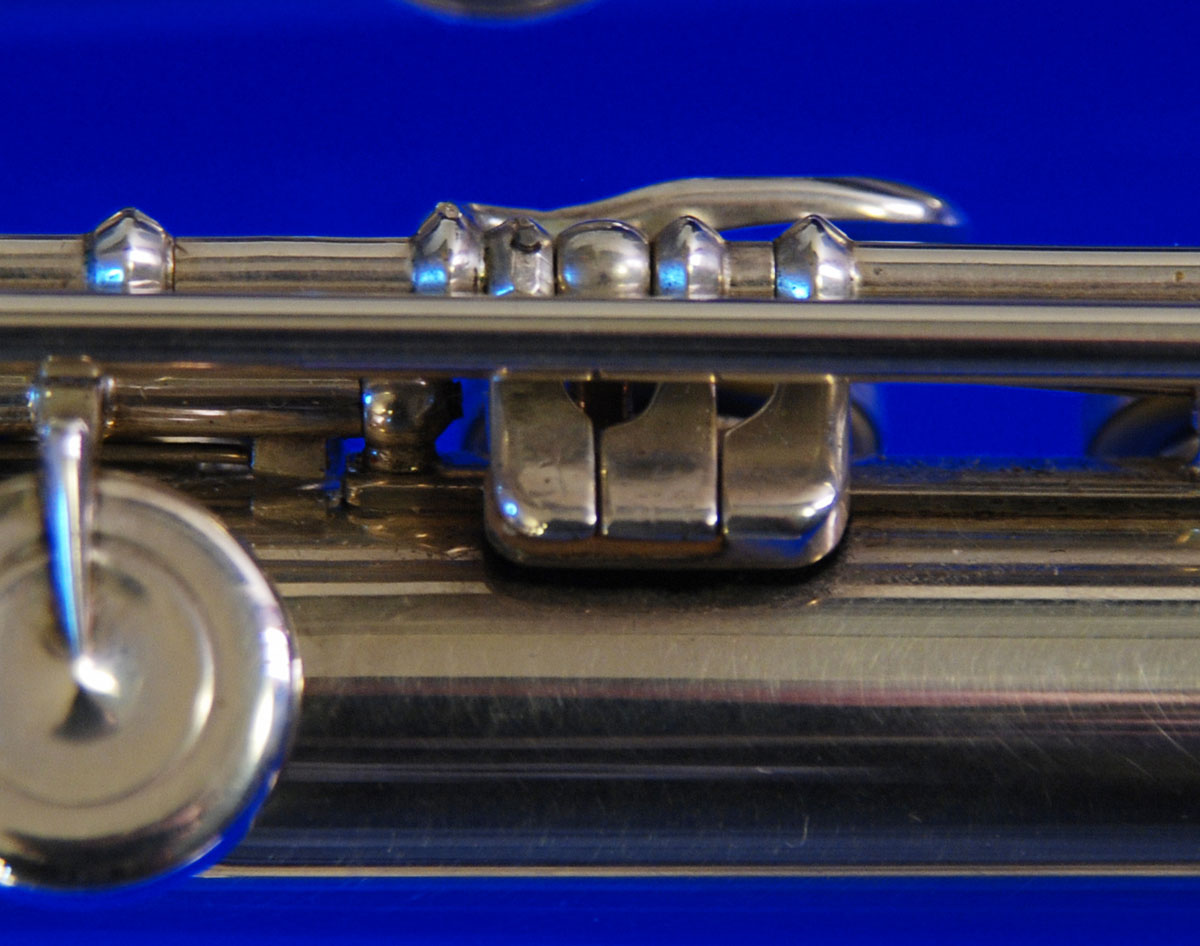 Powell's back clutch lacks a bit of the romance of Lot, having practical straight edges rather than broad, curving hips. 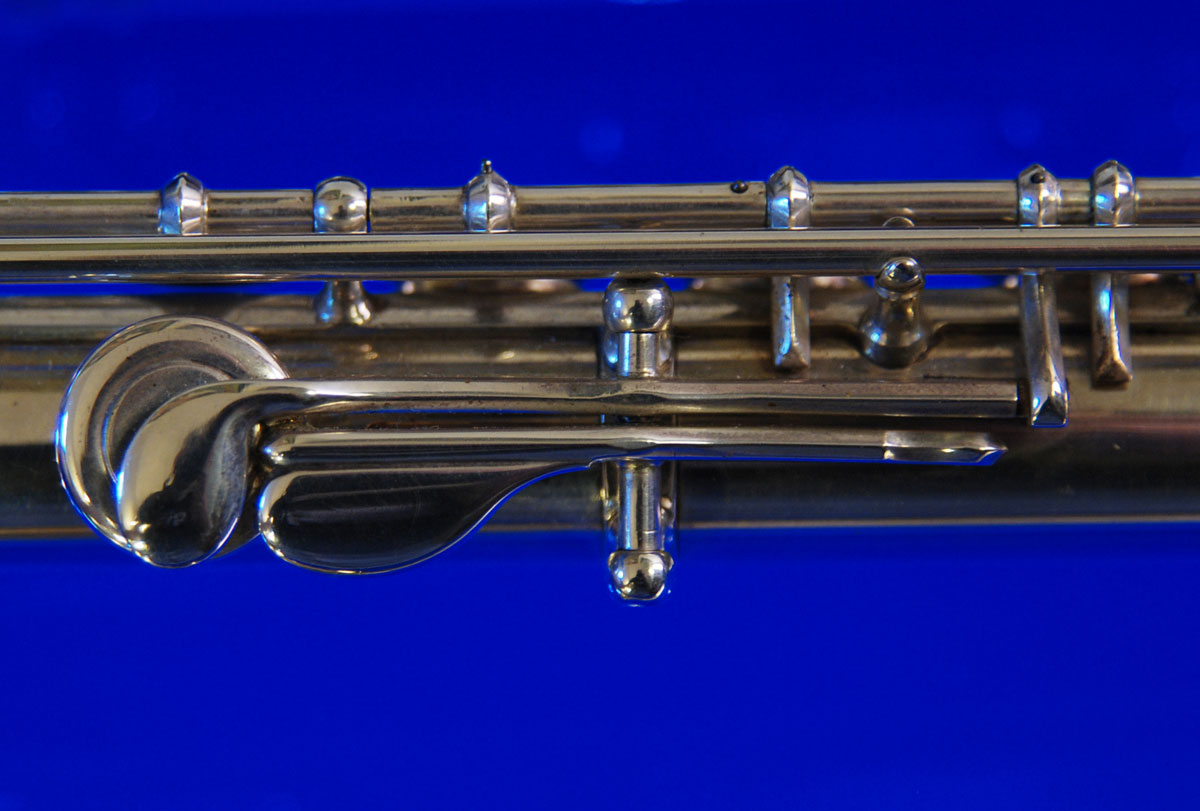 The thumb key is the classic French design, after the trill was moved from the thumb to the Bb. 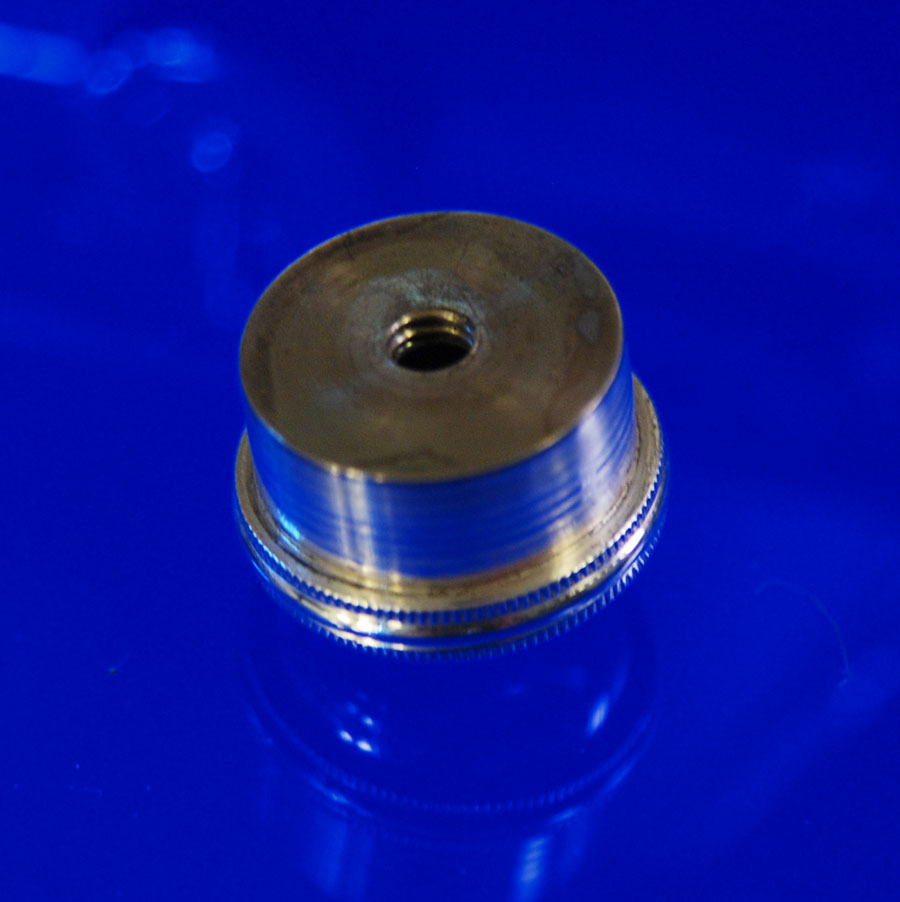 Powell's crown is also patterned after Lot, with the deep box and straight sides.

This is the rear of the B footjoint, showing the pinless design of Villette. The real question with Powell is not how closely his flutes resemble Lot, but how well they play. Powell carried flutemaking artistry into the 20th century, and his flutes are the work of a true Master. 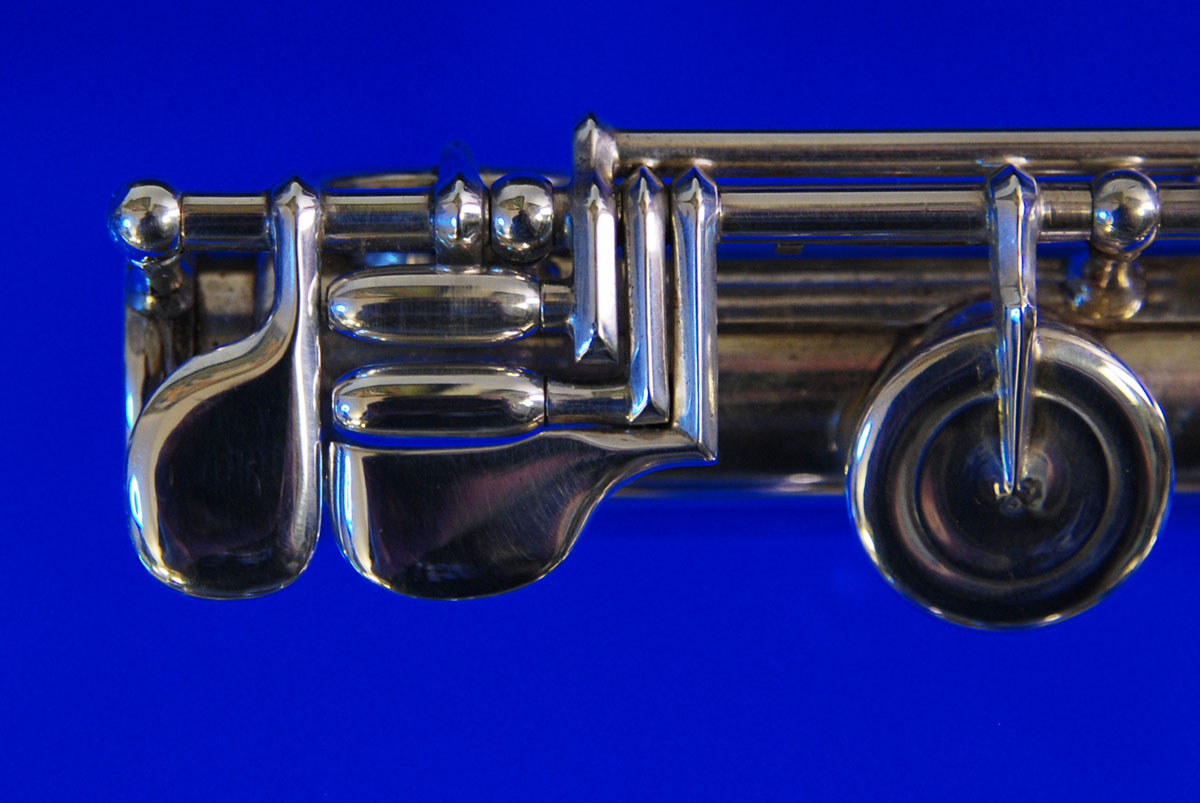 Remarkably, Powell seems to have exceeded the Master Chambille in the elegance of his footjoint touches, while using exactly the same design and style. 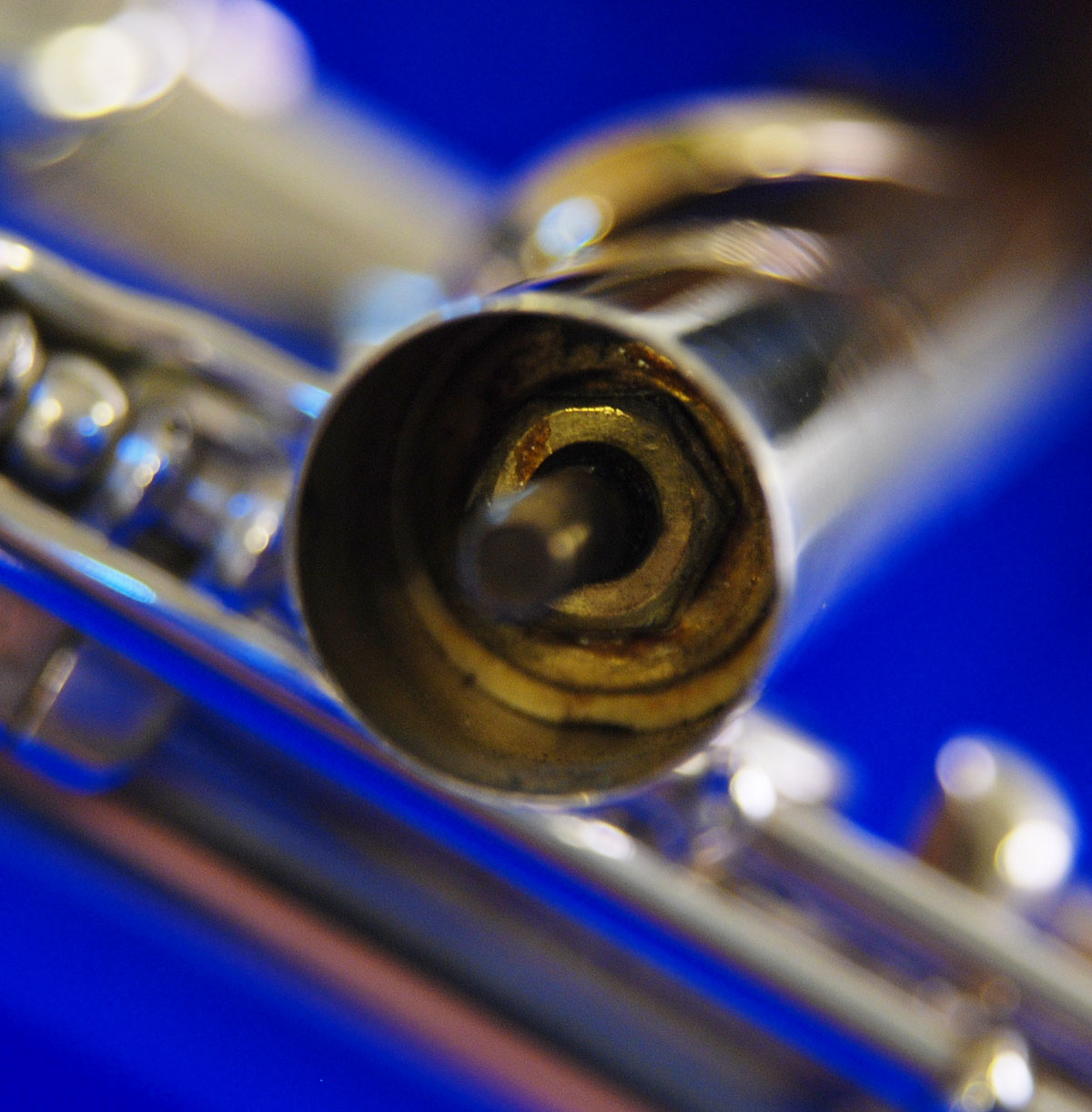 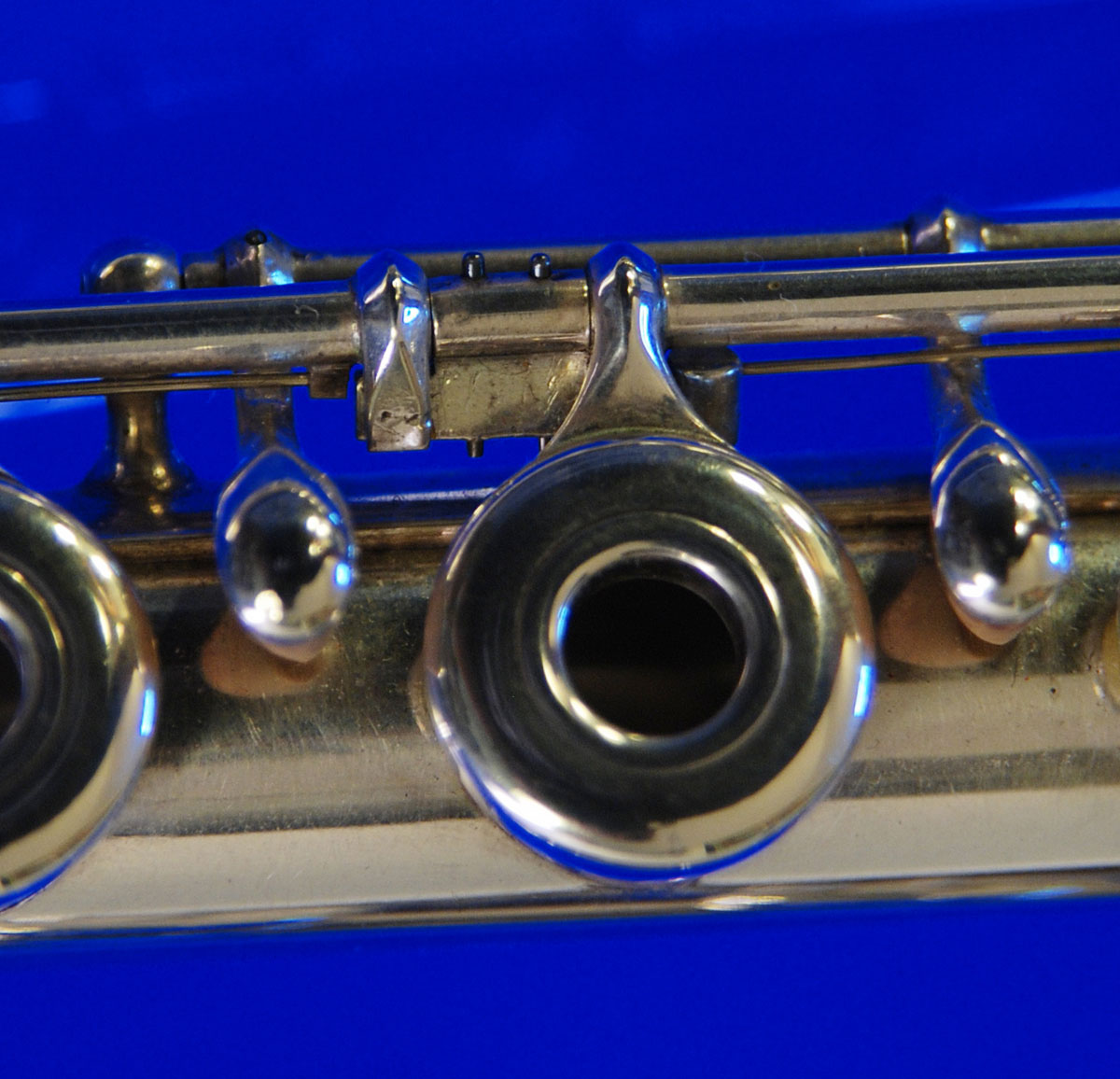 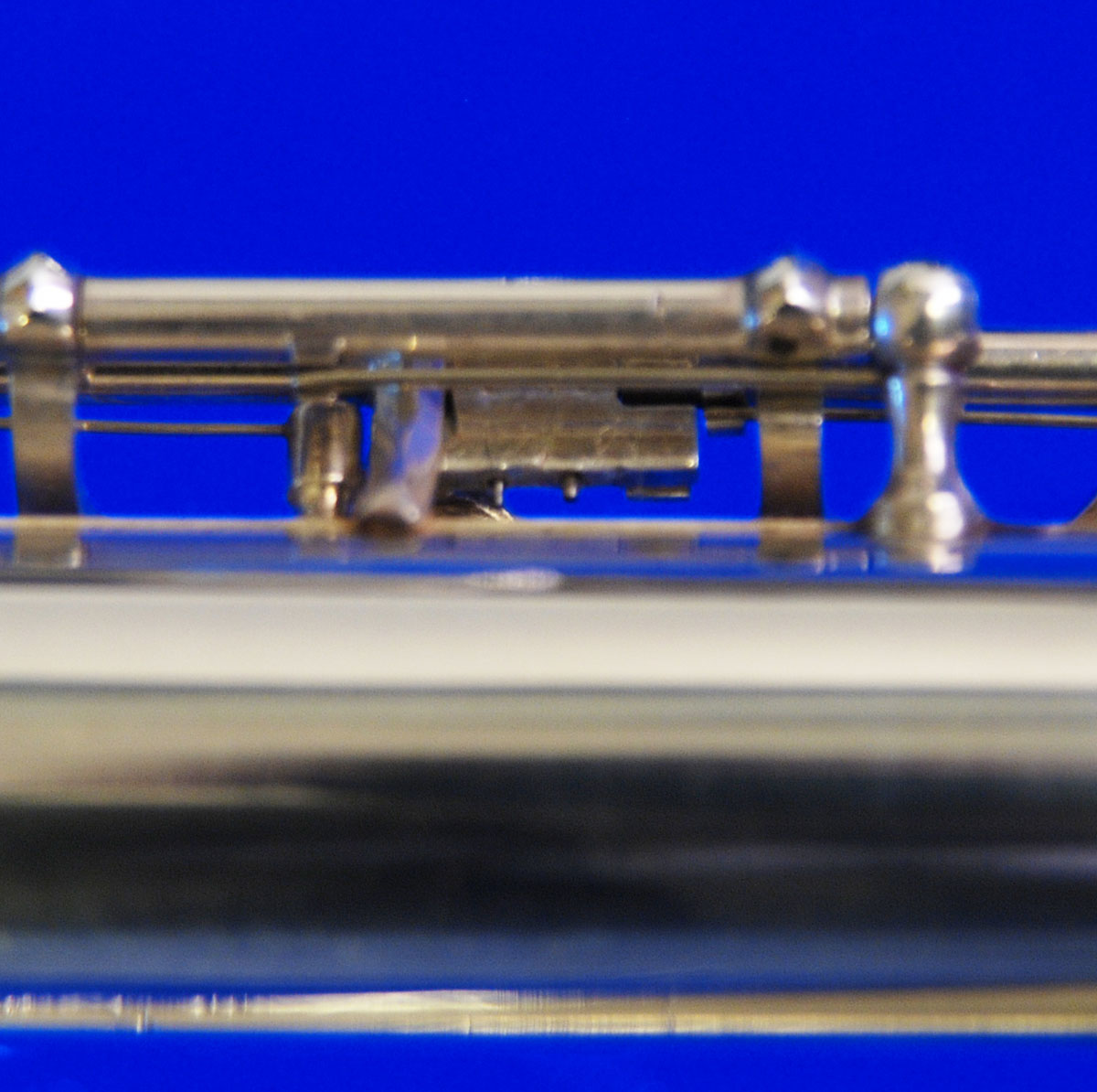 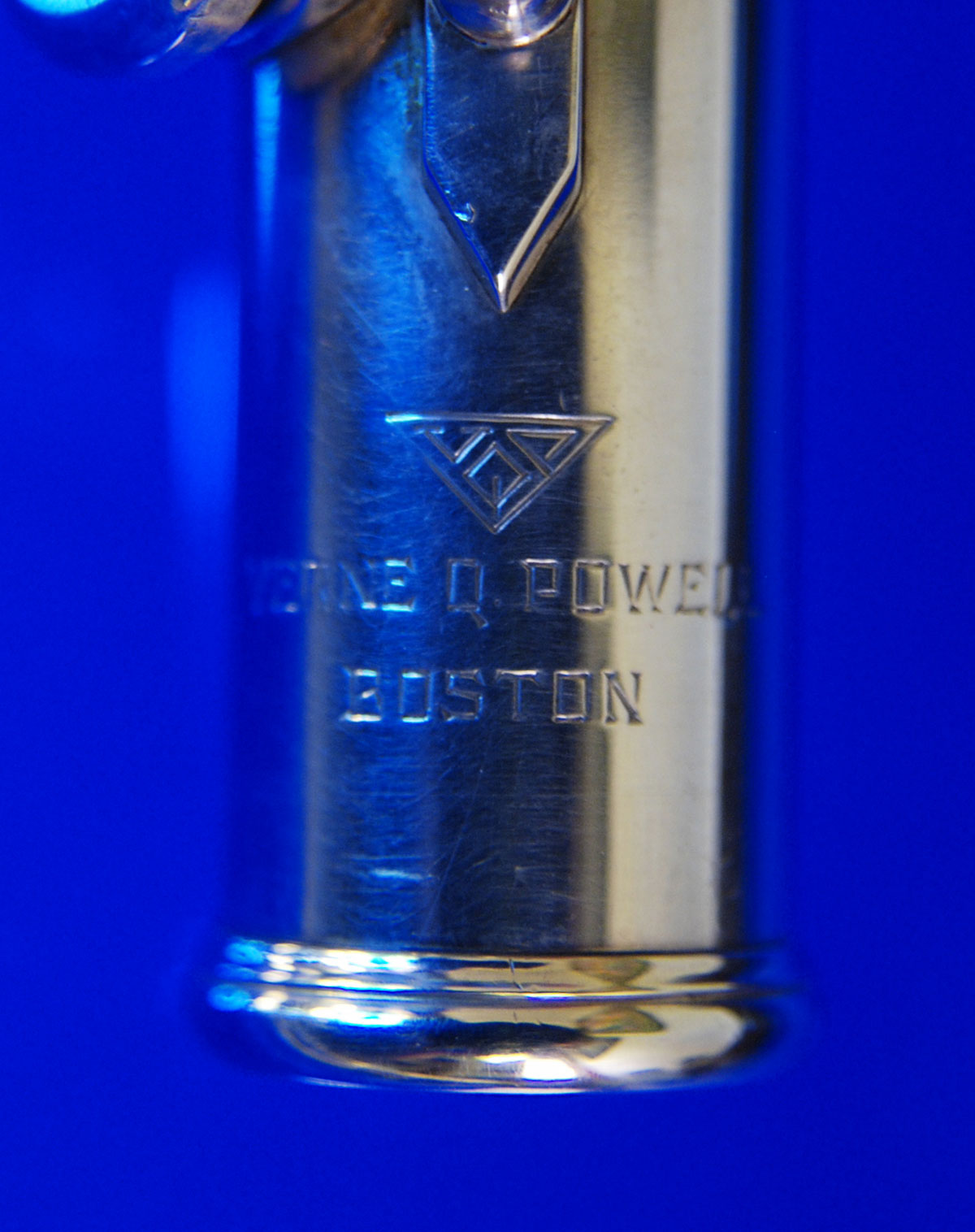 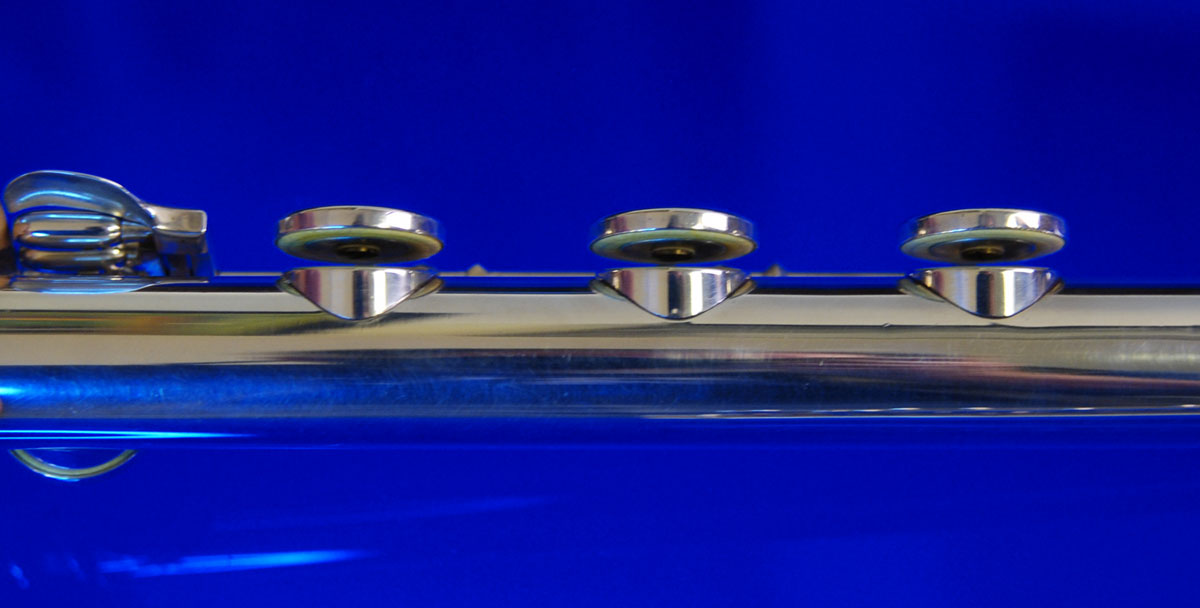 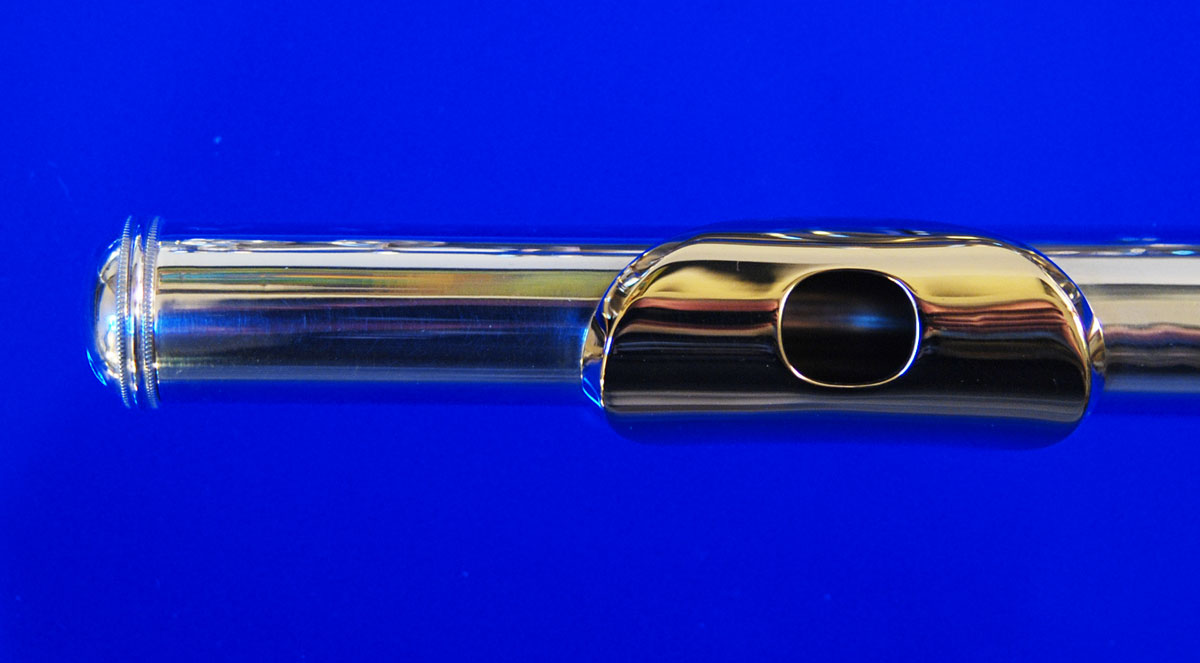 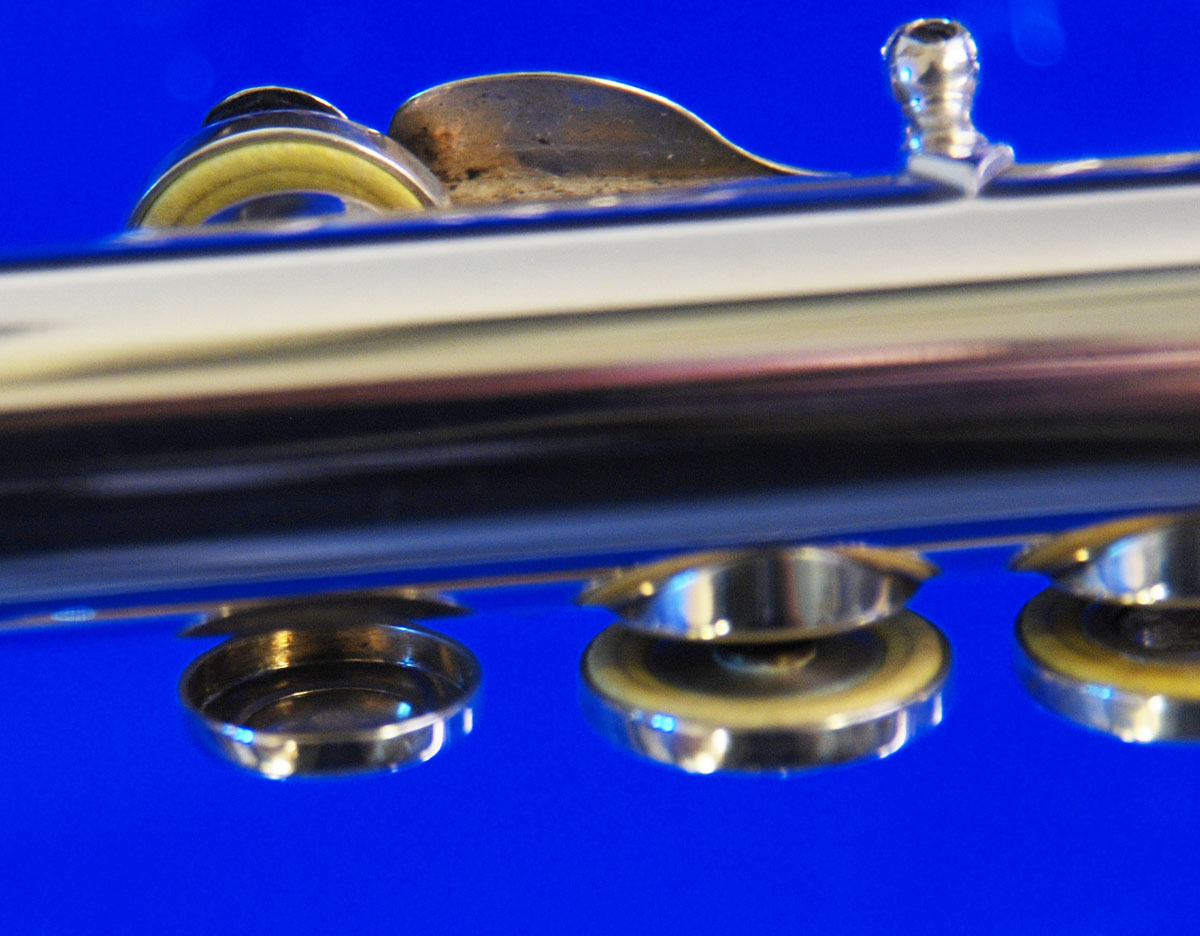 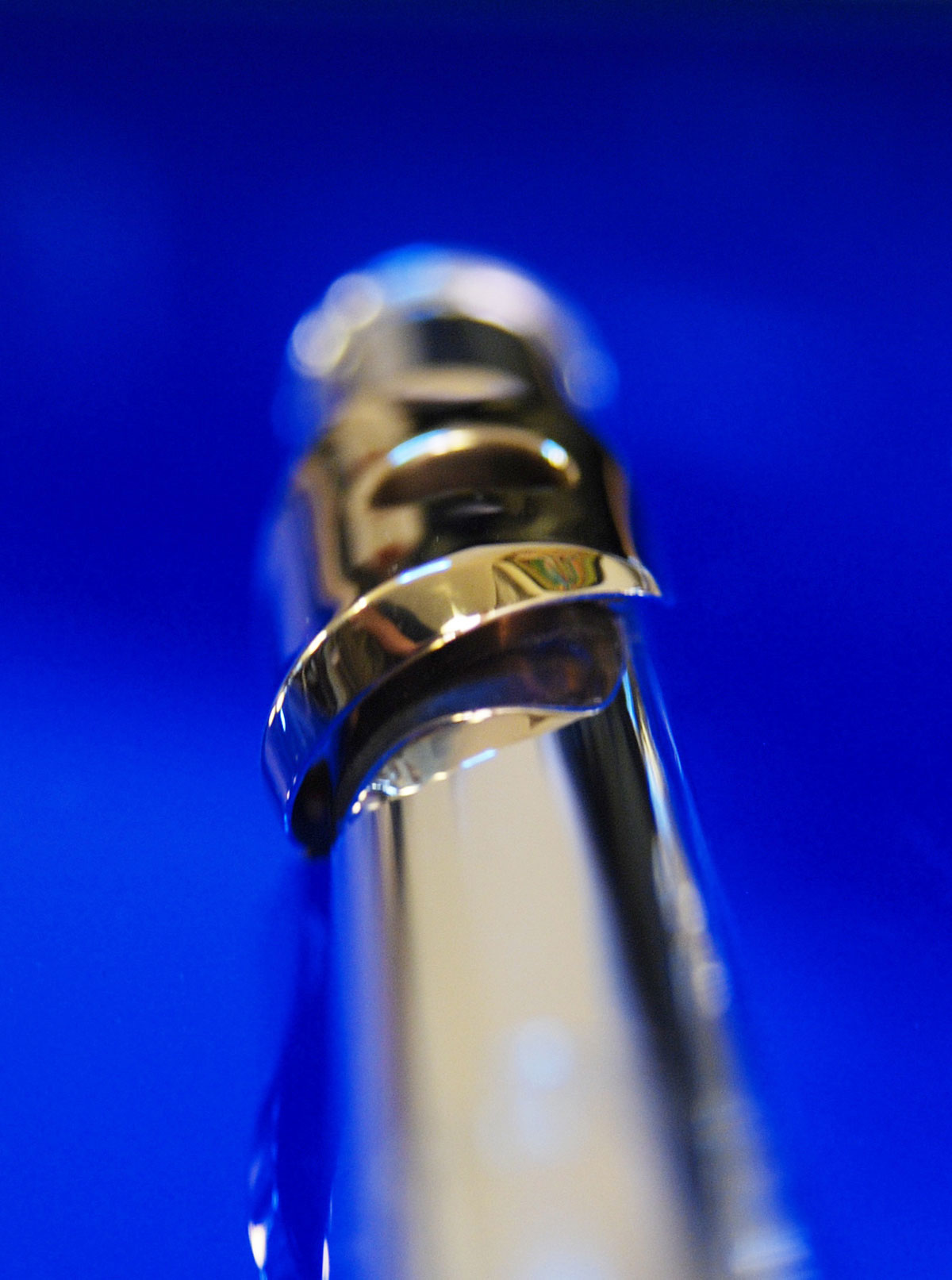 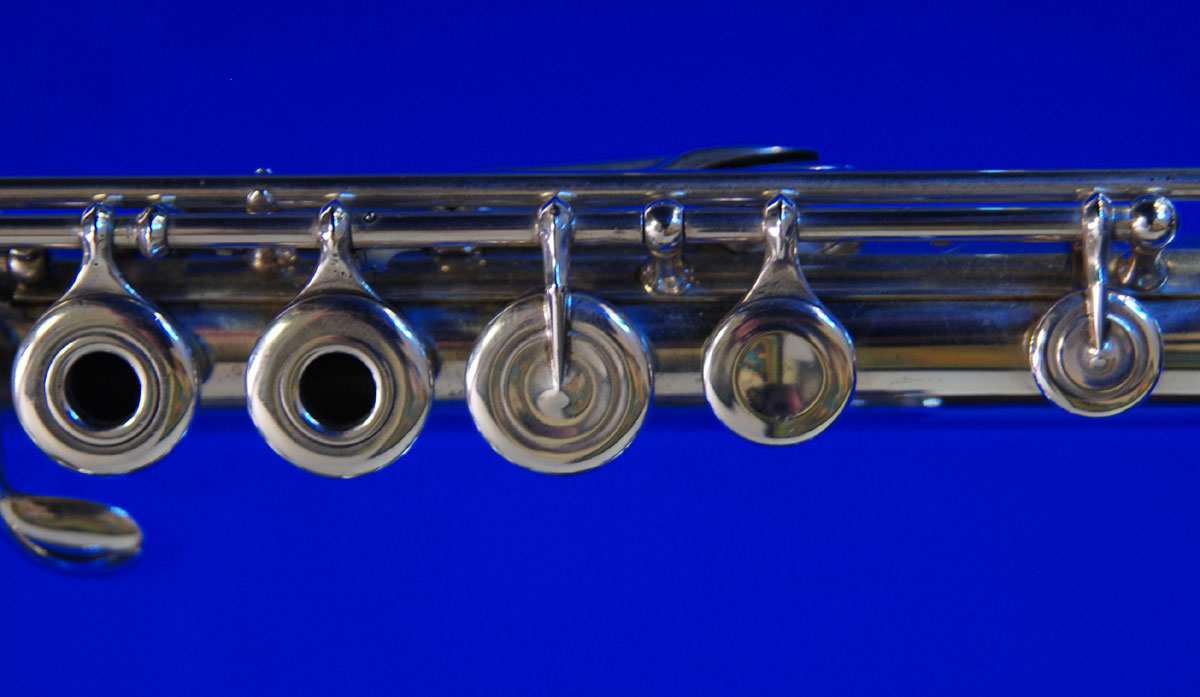 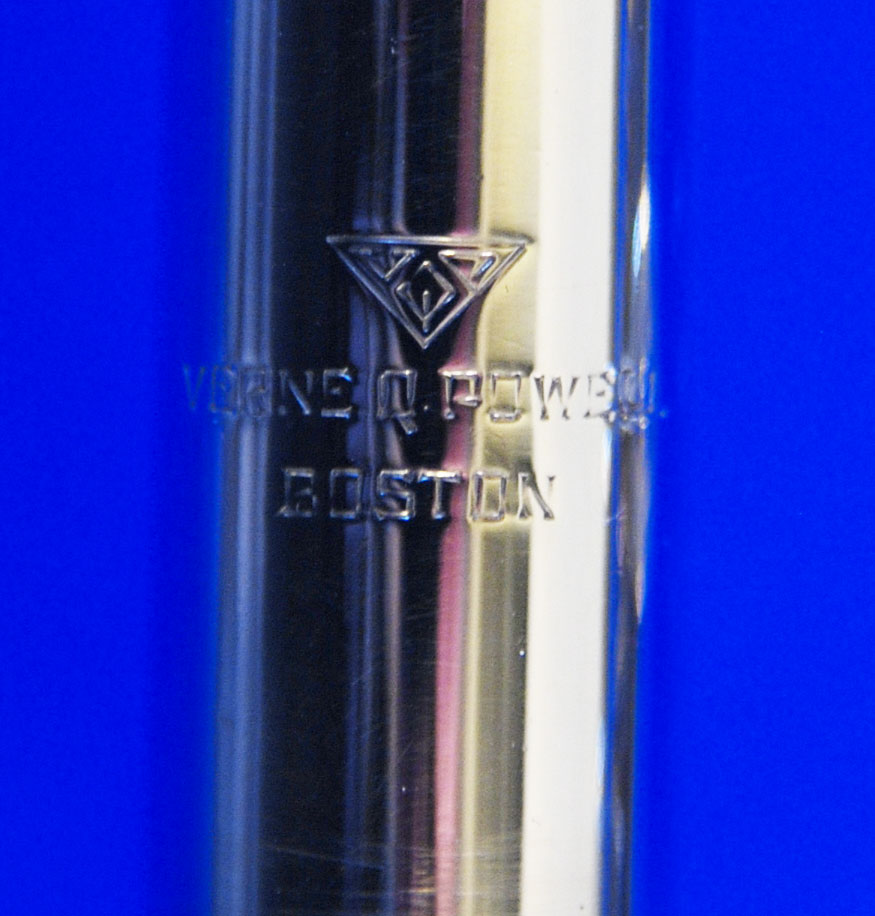