Stamp: Engraved on headjoint: L. L. / LOUIS LOT / PARIS / 7544 (??) / BREVET�, same on body less the number. Note: the first digit of the serial number has been purposely changed to a "1". The original number is not certain.

Manufacture Date: I believe that this flute was probably made in 1906, during Chambille's second year of proprietorship.

Hallmarks: Hallmarked on footjoint and body keys, upper body rim, and gold lipplate. Body hallmarks H#V with boar's head. Headjoint hallmarks have been purposefully scratched clean (or the maker's mark is a view through fog of Rodin's Burghers of Calais).

Comments: The warm, luscious, and powerful tone of this flute seems to be the sound that Verne Powell and the American makers were trying to copy a few decades later. This instrument was purchased by R. E. Anfinson in the 1950's or early '60's from a flute teacher at the University of Iowa. Roland Anfinson was born in 1930, and died December 13, 2000 in Platteville, WI, after shoveling snow (Dubuque Herald Telegraph, 12/13/2000). Anfinson had been a member of the 33rd Army band in Heidelberg, Germany, and became well known as a versatile musician. He formed the Rollie Anfinson Combo at the University of Michigan in 1951 as a sax player, and studied flute with Betty Bang at the University of Iowa later in the 1950s. A long career in music led to the Chairmanship of the Music Department at the University of Wisconsin at Platteville. Anfinson was very active right up to his passing, as evidenced by the snow-shoveling mentioned in his obituary, and as related by Tony Thomas (http://www.fallenroadies.com/tony.html): Shortly arriving at UW-Platteville, I hooked up with an extraordinary sax, clarinet, and flute player named Rollie Anfinson. Rollie and I formed the jazz duo Satin Jazz and gigged for several years. We then added a vocalist, Sheila Cottrall, and continued to gig for several more years. Rollie died late in 2000, but Rollie, Sheila and I had recorded 20-plus songs at Heartland Studios during fall 2000, so the music of Satin Jazz still lives. (end quote) For years this flute was believed to be #1544, and thus an original Louis Lot. In fact, the first digit of the number had been raised up from inside the flute, filed off, and replaced with the "1" (thanks to Gary Lewis for discovering this during recent adjustments). Furthermore, the inside of the maker's hallmark on the gold lipplate seems to have been scraped off as well. This deliberate forgery occurred before most people were aware of the stylistic differences clearly visible throughout the Lot workshop. Today, we can see that the head and body are in fact contemporary, and clearly made much later than Louis Lot's proprietorship. The second number is also unclear. It could be a 3 or a 5. Thus this flute is either x344 or x544. Checking the existing record books, the first number 4 can be eliminated, as they are listed under different models. The first number could be 3,5,6, or 7. After 7 the hallmark would have changed to Chambille's

Material: This flute is made of silver, with a gold lipplate. The lipplate flange is silver, and one can see the sandwich of tube, flange, and gold chimney through the embouchure. The crown is of silver, with a plated base. The padwashers are the screw-on-top type. The springs are gold. The silver tubes appear to be seamless!

System: This is the model 6, silver flute with B foot, with a specially ordered gold lipplate. The trill is to Bb. Everything is original, except the padwashers and springs.

Condition: This very fine flute has been used as a player, and shows signs of wear and very good care. The instrument has been buffed over time, and the silver has a beautiful creamy texture and color. Any wear on the mechanism has been taken care of by Gary Lewis in San Francisco during a recent clean-oil-and adjust. The headjoint has been cut by a few millimeters.

Pitch: This flute has been used professionally for many years at A=440.

Case: In a double case for flute and piccolo, with brown canvas cover, including the name "R. E. Anfinson, Platteville, Wisc.". 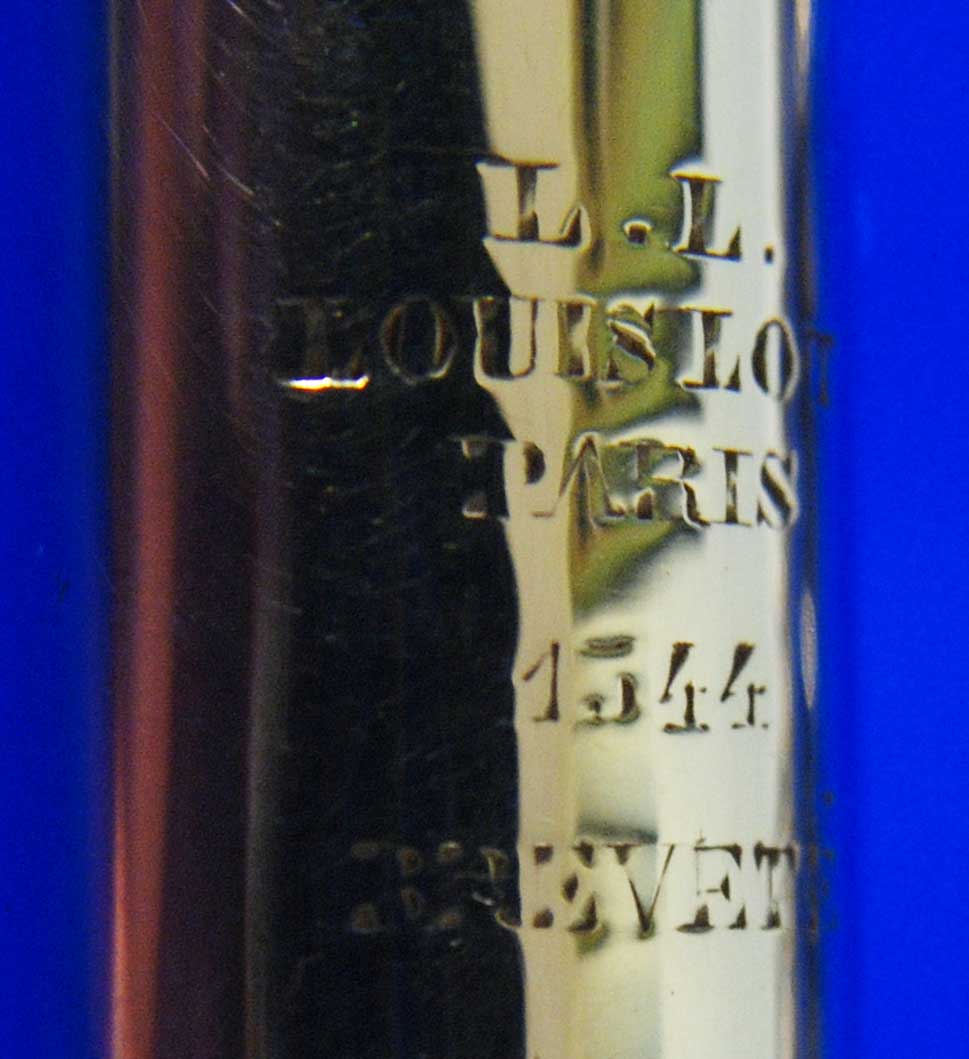 There is a mystery around this wonderful flute. The first digit was most probably a seven. Someone actually removed the seven and cut a one! Regardless of the number, this is one of the great flutes from this workshop. 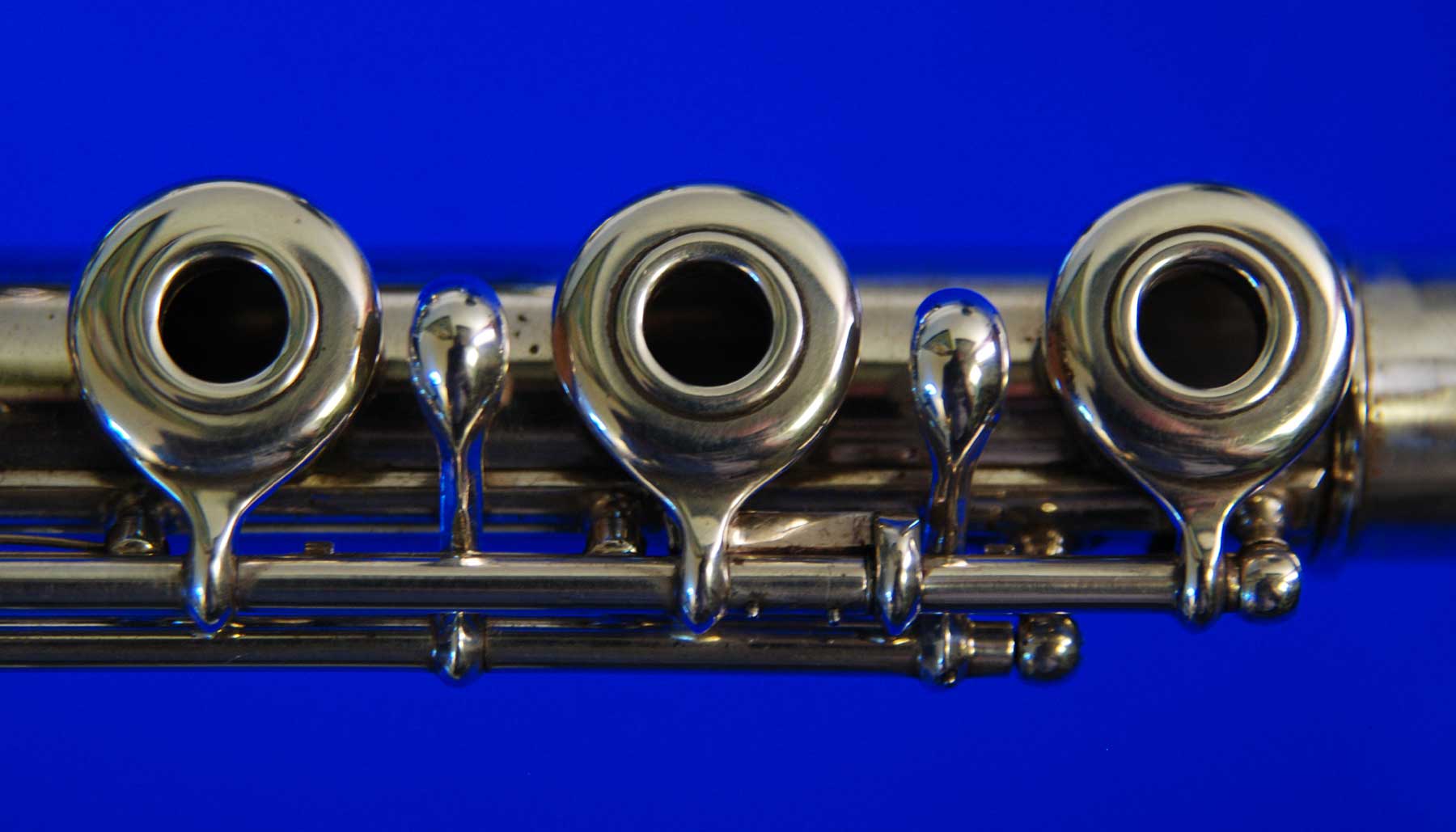 This is the fully developed right hand. The very long T clutch resembles Powell's T, possibly suggesting that Powell copied a flute from this vintage. 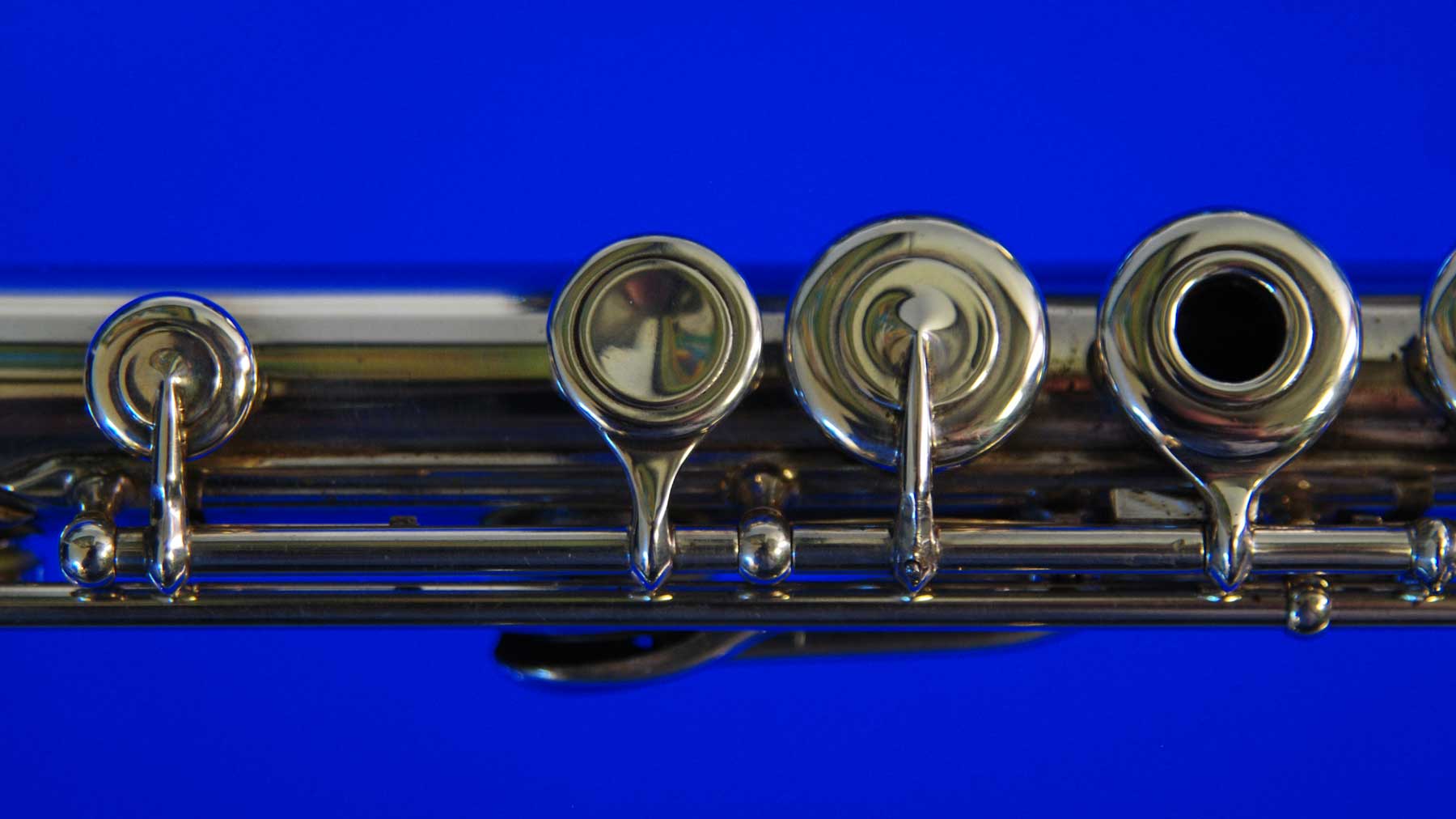 This beautiful flute has been well used over the years, and well maintained. Also note the large shoulder clutch for Bb. 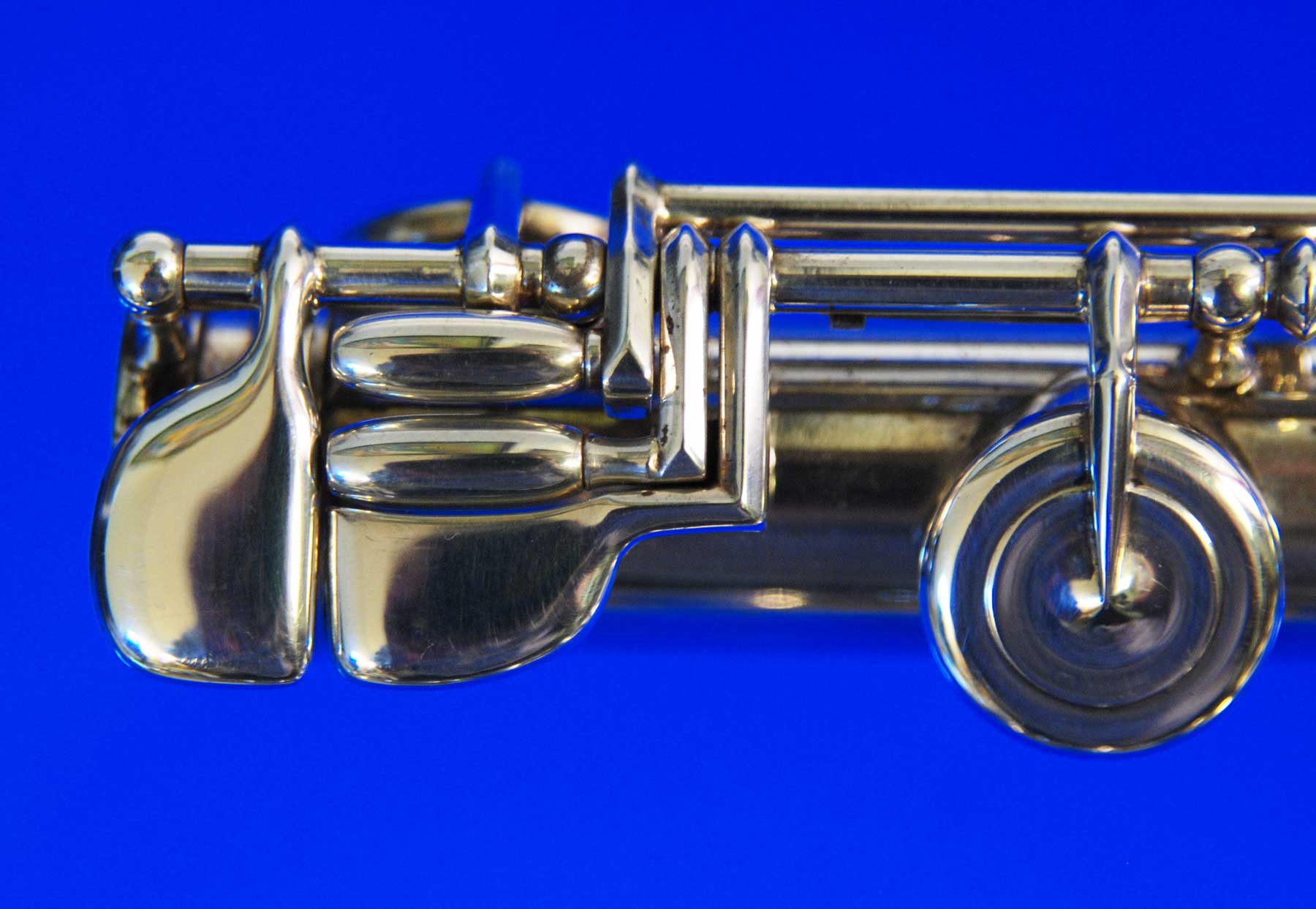 This is the footjoint of Chambille. Note the flat-sided D# and C# touches, the shape of the C and B rollers, and the little ornament between shank and roller for the C. 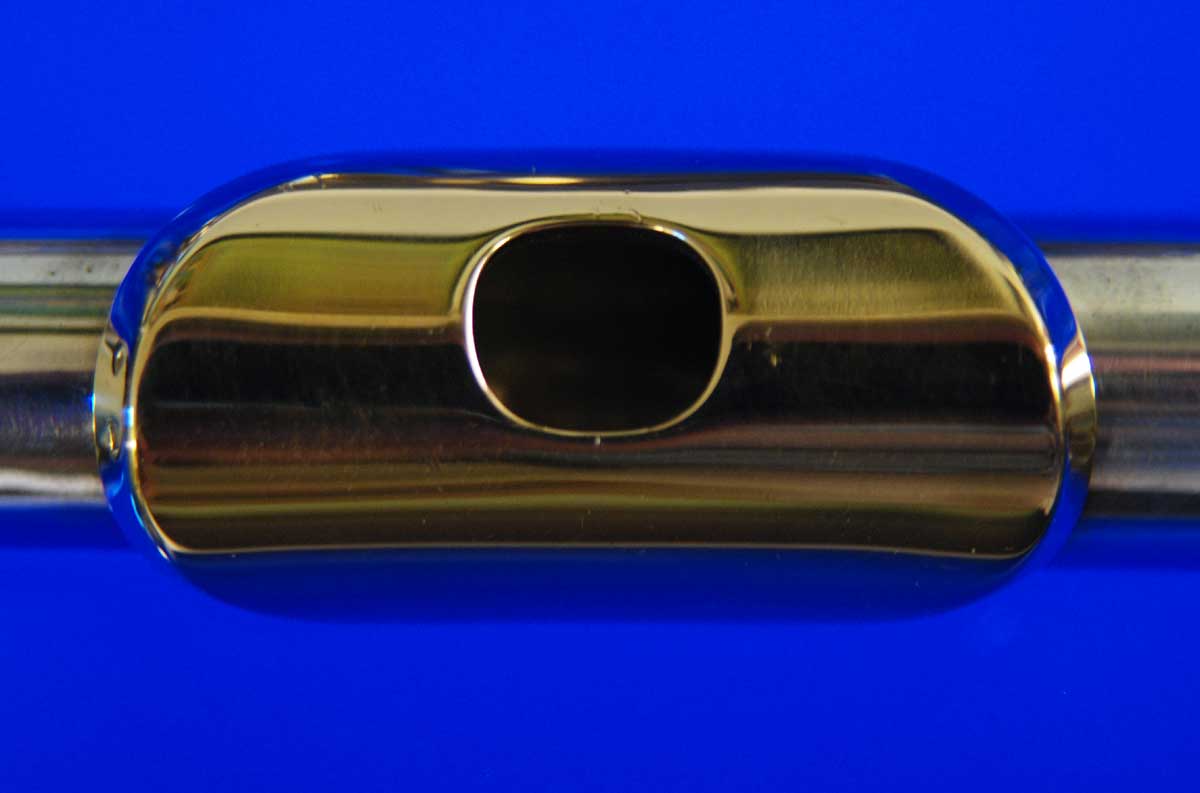 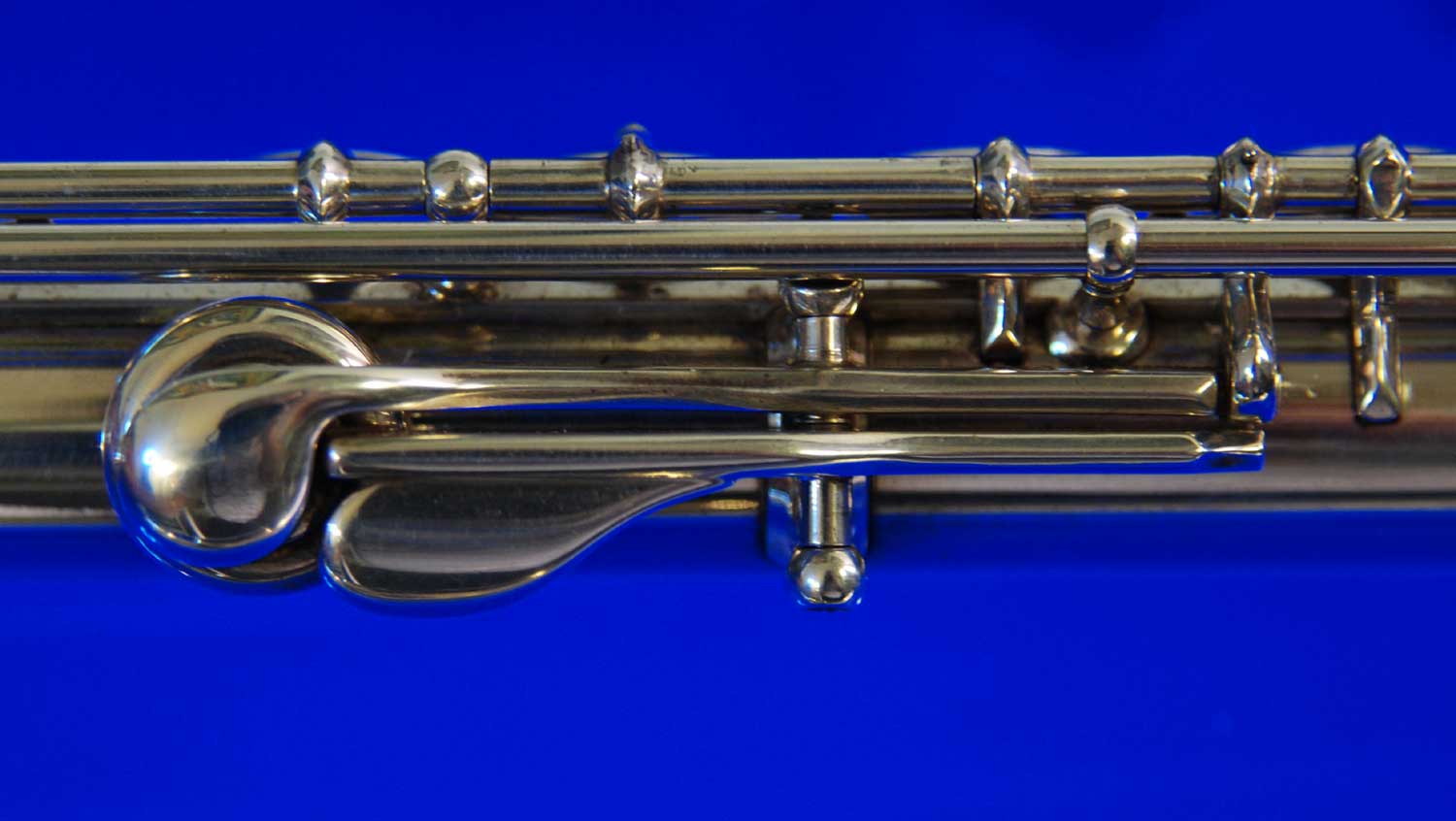 By 1906 the trill to the thumb key had largely been abandoned in favor of the Bb trill in use today. This gave the makers the chance to finish off the tail of the thumb key, as seen here. 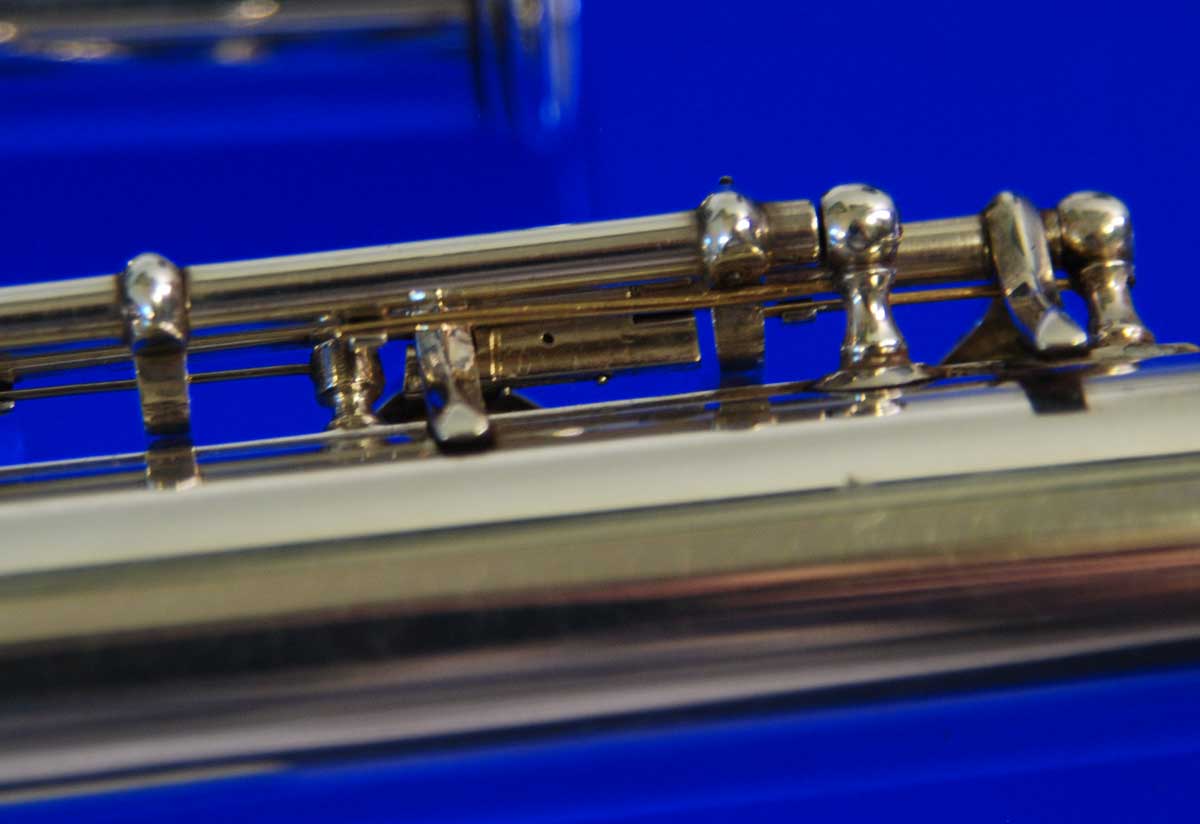 Here we see the rear of the T clutch, and notice how long it is compared to that of Villette, Debonneetbeau, and Barat. 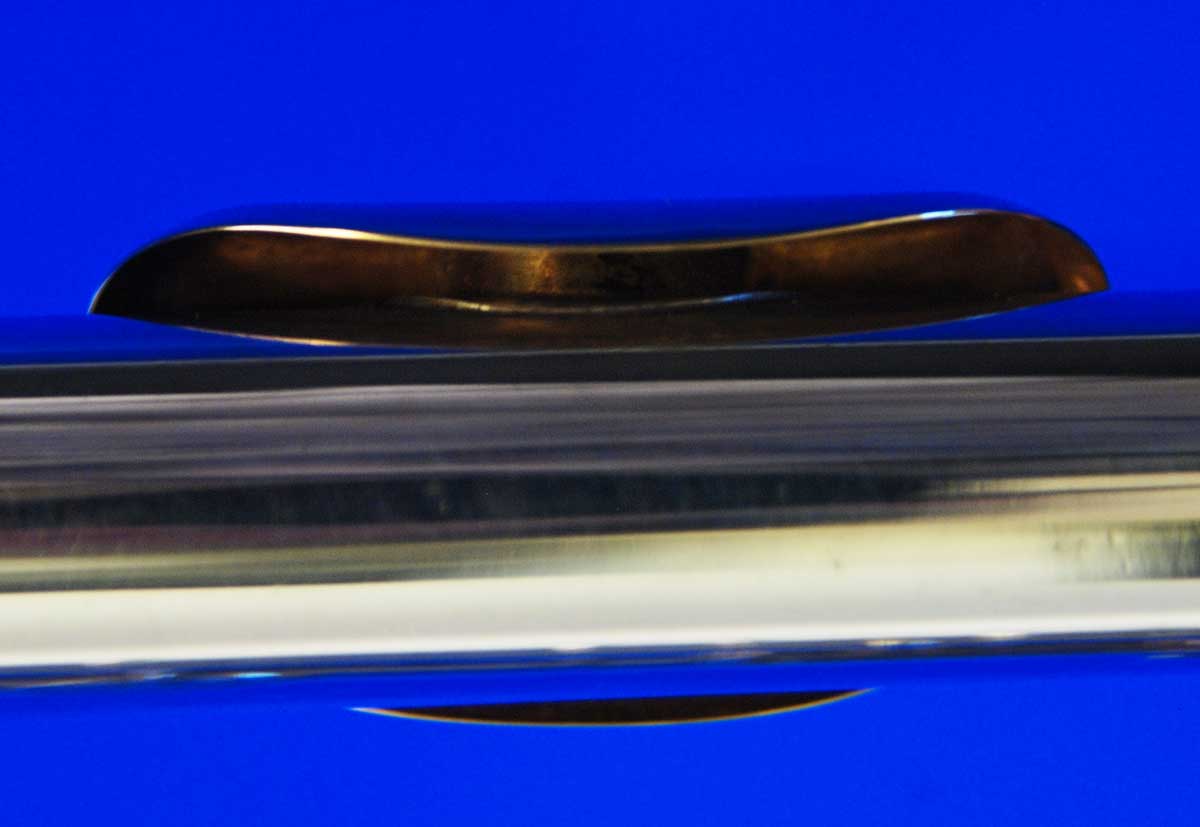 Under the lipplate we see the classic late-Lot silver flange and gold chimney, all in perfect original condition. Inside the embouchure one can see the sandwich of silver tube, flange, and gold chimney. 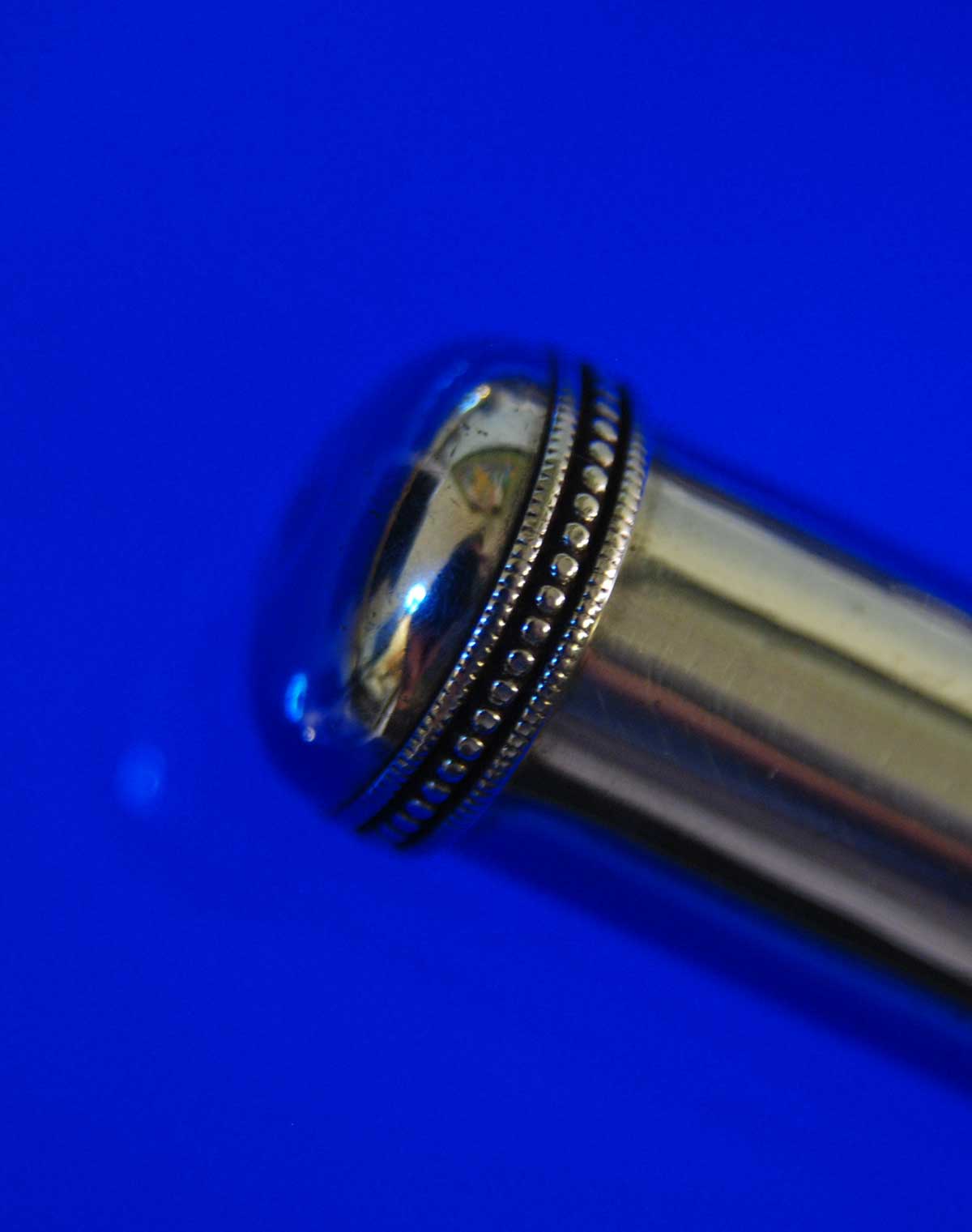 The classic and beautiful Louis Lot crown was finally considered too complicated for the American makers to bother copying. 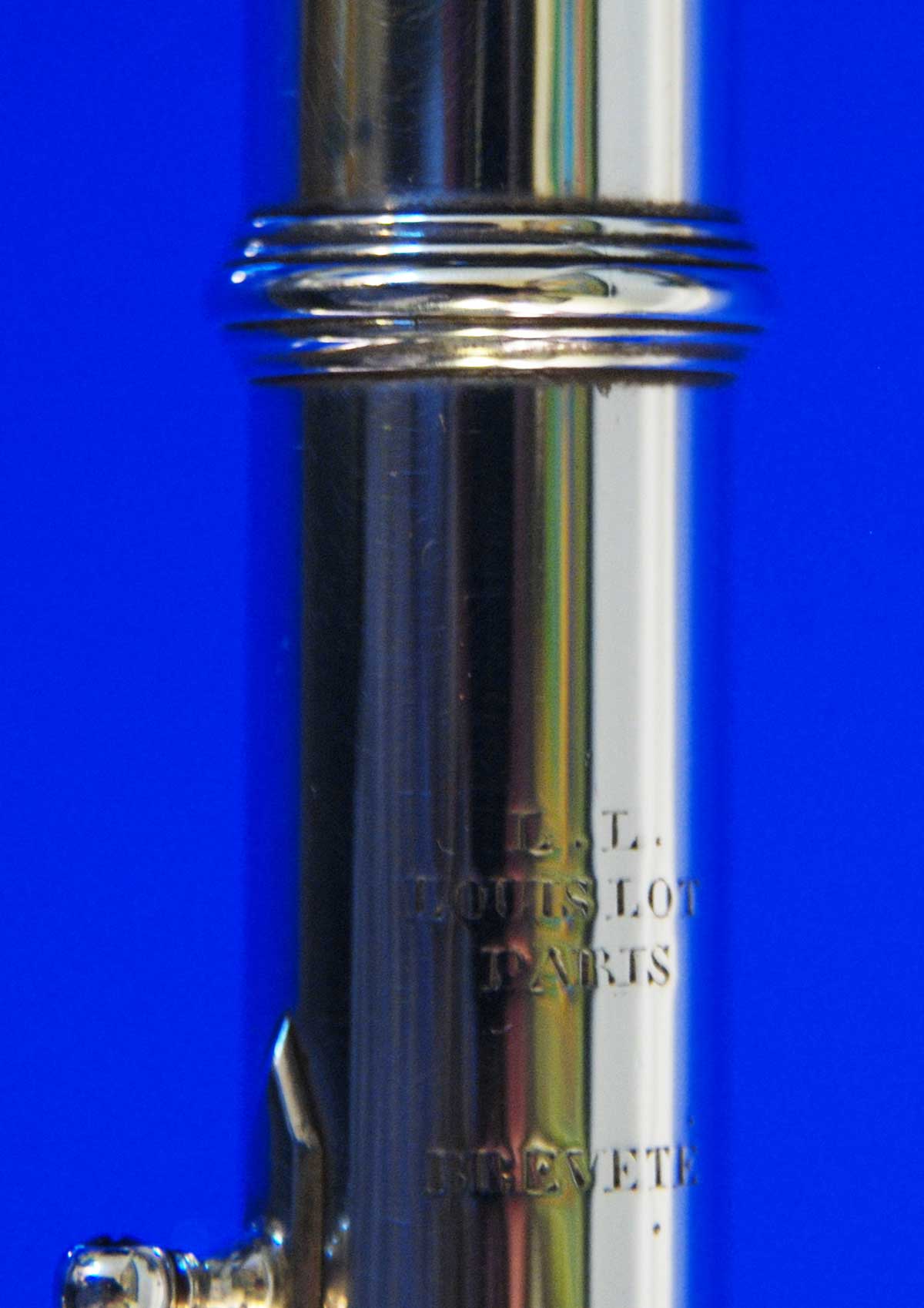 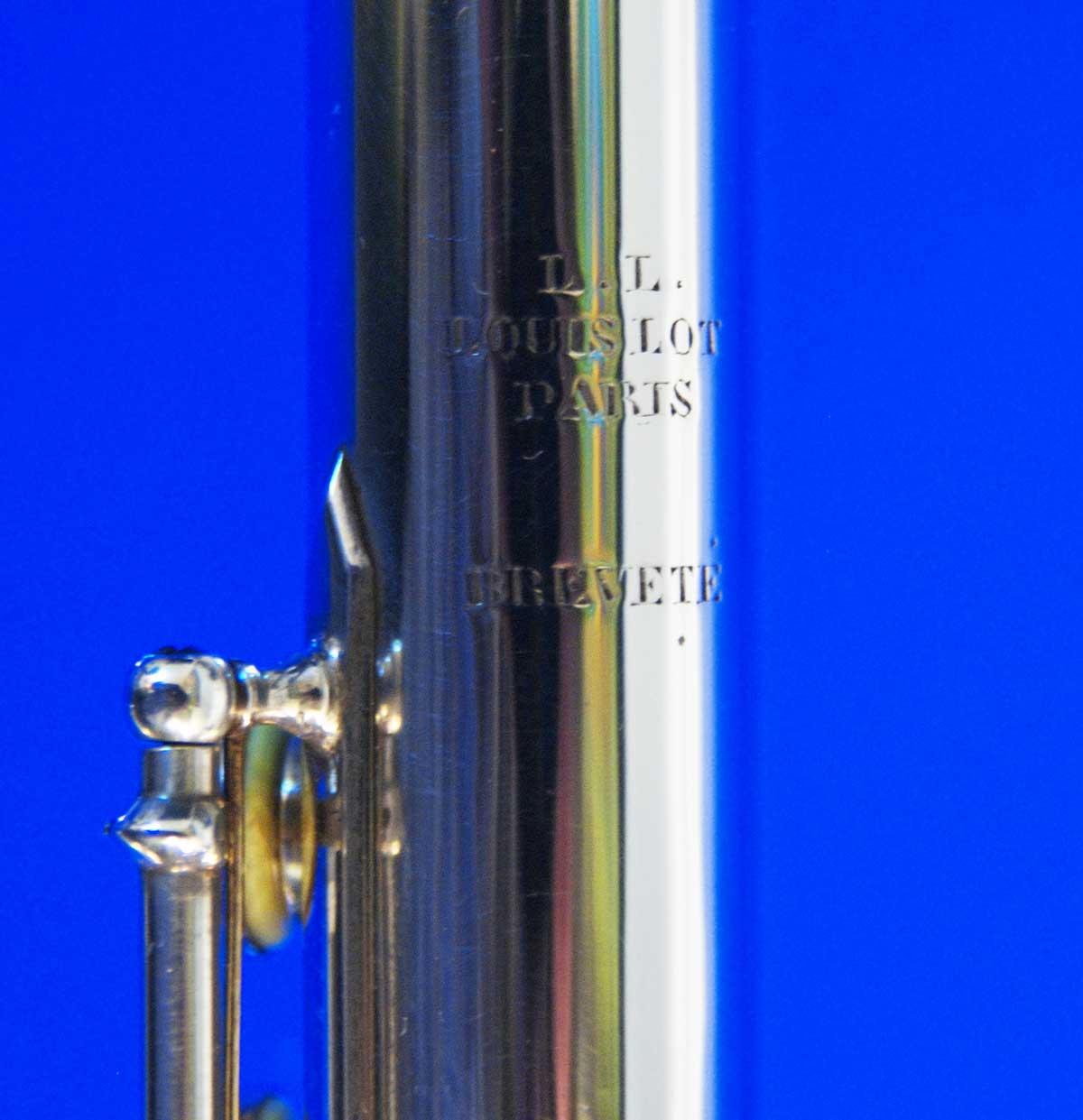 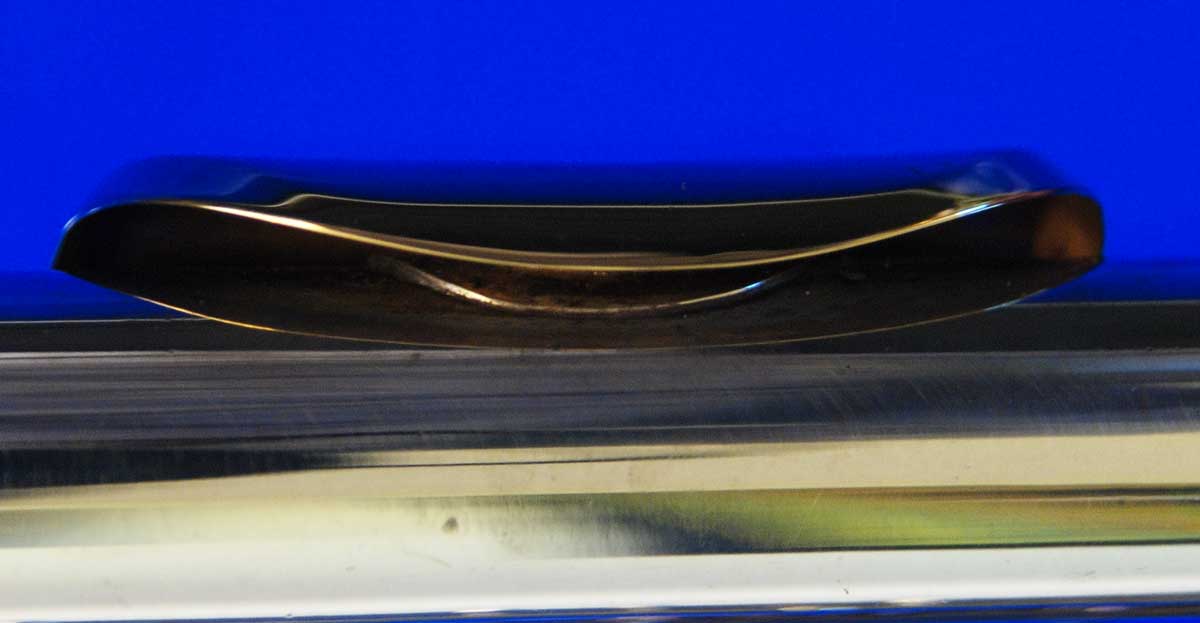 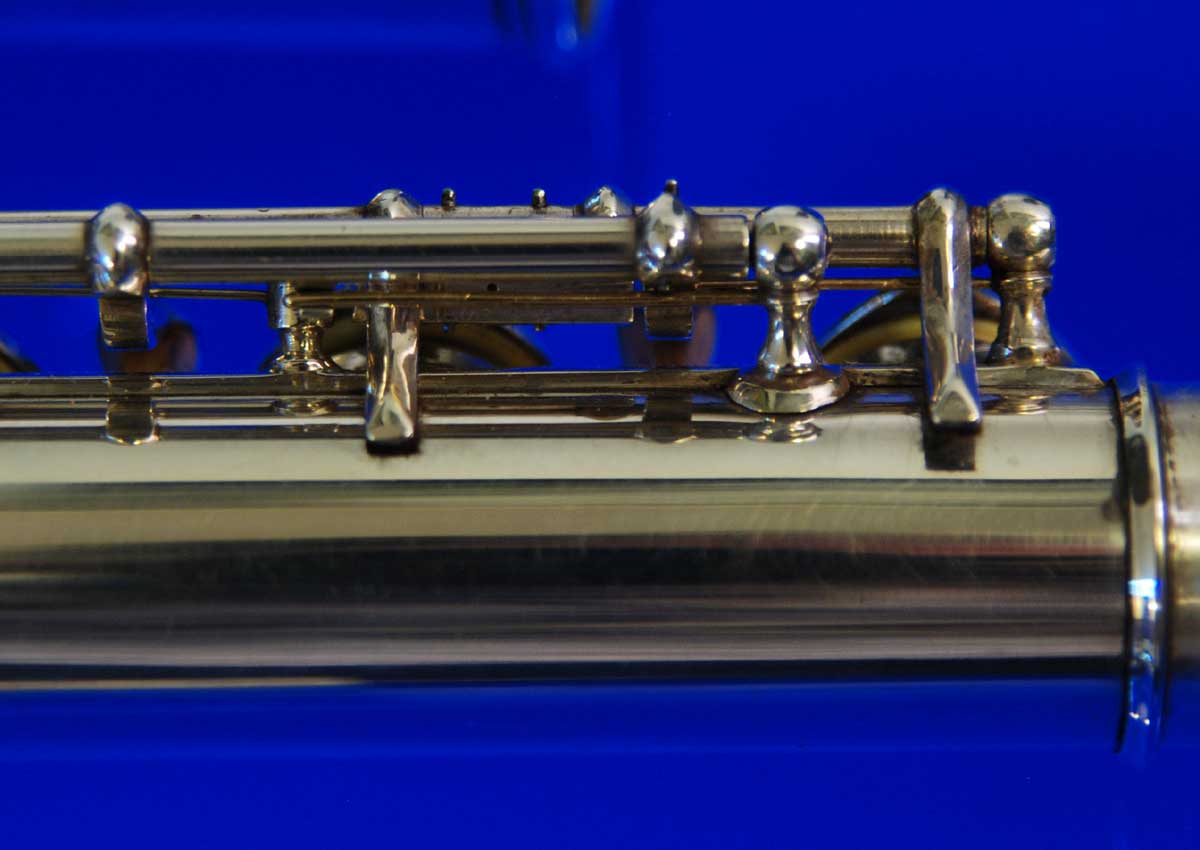 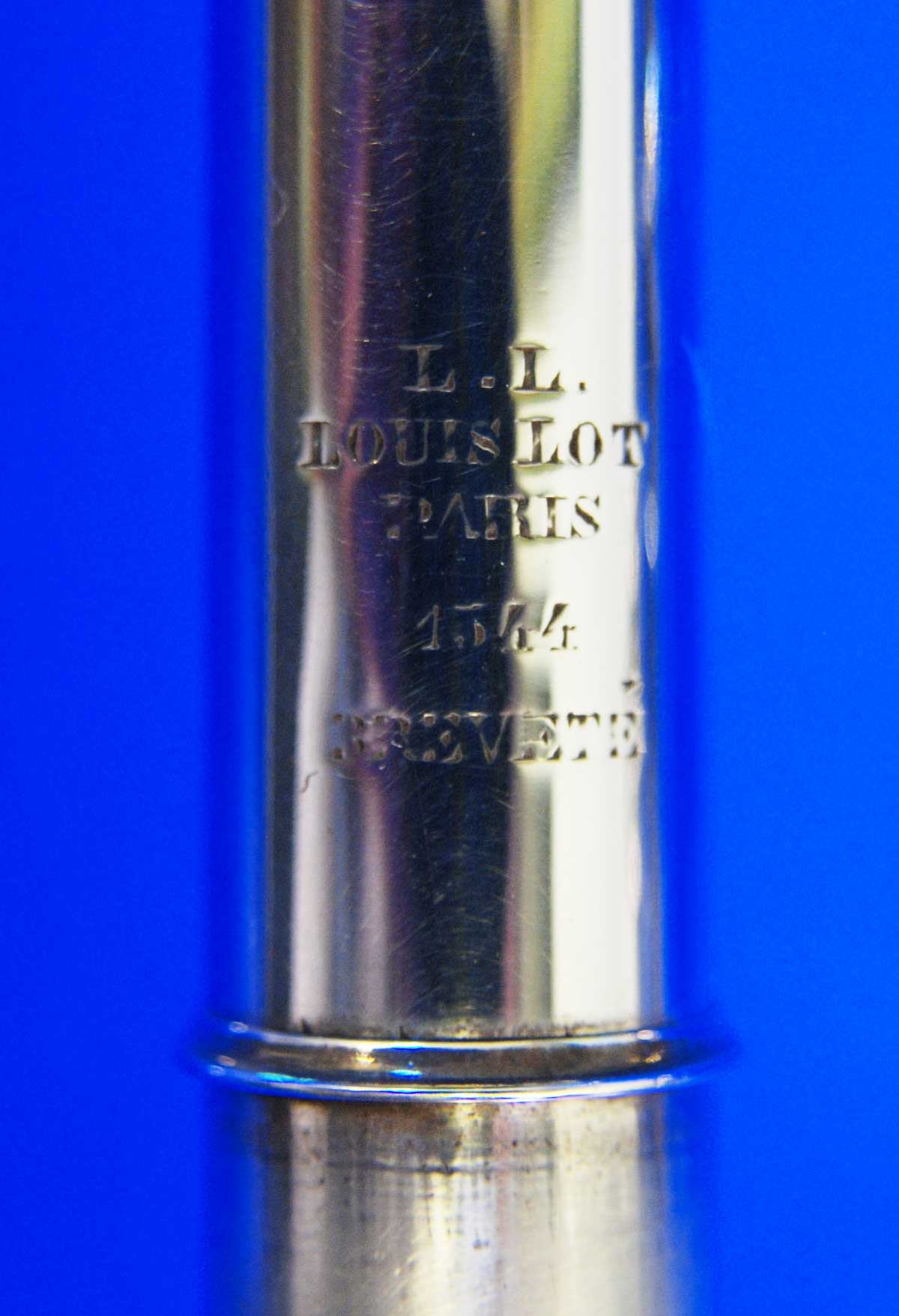