Comments: This is an extraordinary and well known flute. It is the only English model Godfroy known. Since Godfroy flute #802 is engraved for the London Exposition of 1862, it seems clear that this flute was made in the same year. It was either a special flute made for exhibiting in London, or it was made to order for an Englishman who saw the exhibits. Godfroy's English Model Godfroy's flute #811 brings to a full circle the extraordinary events following the diffusion of Boehm's patent of 1847. Boehm, Rudall & Rose, and Godfroy & Lot worked very hard to bring this new flute to market. A large part of this work was determining how to design a mechanism that would work on the new large-hole design. Considerable evidence supports the notion that these three makers worked closely together to perfect this mechanism. Boehm supplied tubes and flutes to his partners. Godfroy & Lot immediately supplied Rudall & Rose with flutes. Indeed, George Rudall had a metal flute from Godfroy already by 2 Sept, 1847, before Boehm had supplied them with a completely satisfactory Model flute. Rudall complains to Boehm about his Godfroy flute in his letter of 2 Sept, 1847 (Bigio, p. 103). The Boehm flute that Rudall had was the Master Flute #1. Rudall mentions that Boehm asked him to deliver this flute to "your friend at the Society of Arts", which was presumably Richard Carte. This flute is lost. Boehm's first commercial flutes, from the same September, 1847, are in the Library of Congress. They have uncovered barrel embouchures, and a very archaic mechanism. George Rudall's Godfroy flute almost certainly looked like, and may well have been, the flute now in the Valenza collection (S144). The brass tube is probably from Boehm (it is identical to his movable tube in the Library of Congress), and the mechanism is the finest of Godfroy & Lot's 1832 system keywork. The footjoint is Boehm's classic design, made in France. The headjoint has a covered barrel embouchure. Godfroy and Lot continued to supply Rudall & Rose with flutes for the next few years. It is on these flutes that we can see the development of what we know today as the "French Model" flute. A classic example of the earliest flutes supplied by Godfroy & Lot to Rudall & Rose is illustrated here. (note: these illustrations are in the pdf version of this essay). Among the examples of flutes with French characteristics but an English mark is the flute illustrated here with open holes (Valenza). At this point the Frenchmen apparently chose to concentrate on wooden cylindrical flutes. I know of no silver flutes marked Godfroy from this period. The earliest numbered Godfroy cylinder flutes of which we are aware are #112 and #113, a ring key and a French model respectively, both of wood. The wooden Godfroy ring key flute owned by Mark Leone is probably the earliest marked flute known, followed by the interesting flute owned by Guy Collin in Paris. Neither of these are numbered. The English, on the other hand, continued to experiment with the metal flutes. By 1850, Carte had submitted his system for a patent, which he received in 1851. Carte built this system on conical wooden flutes as well as cylindrical silver ones. On the silver flutes he used a barrel embouchure. Carte also eschewed the open hole keys used by Godfroy & Lot. He designed a handsome plateau with a flat top. These barrel embouchure flutes with flat-plateau keys became symbolic of the English style. The earliest known Godfroy silver flutes are an unnumbered one, and #465, illustrated here. Although these are completely French Model flutes, they both have a barrel embouchure. This is not because they were ordered for an Englishman necessarily, but rather because the lipplate had not yet been considered complete. Thus the Barrel embouchure was well known to Godfroy. Godfroy's next known silver flute, #600, and all the others, have lipplates (except, of course, for the #811 discussed here). Louis Lot, on the other hand, began his flute production in 1855 with the now-classic lipplate. He did experiment with his lipplates, as evidenced by the wooden lipplate flutes made for the Conservatory in 1860. In short, by 1855 the French Model flute was assumed to have a lipplate, and not a barrel embouchure. This was a matter of fashion, since the French had certainly been used to making flutes either way. Thus we can see that the flute #811 is a very special model. It was built to show the English that the best makers of France could construct an "English" flute that was the height of beauty and elegance in a way only France could produce. Godfroy had brought the circle to a close. After participating in the creation of the modern flute, he showed that he well remembered the early days. This flute is a testament of respect, yet made with a quiet beauty that almost claims the artform.

Material: This gorgeous flute is made of beautiful silver, with a barrel embouchure presumably filled with wood. The corkscrew is a silver tipped wooden rod. The springs are currently gold. The pad washers were modernized in 1978.

System: This magnificent flute is very up-to-date for it's time. It has a side G#, a foot to B, and a trill to B. Godfroy used the trill key rod for his thumb key trill, which requires the gap in the strap visible under the touch.

Condition: This flute is in excellent original condition, with a few of the usual changes. The headjoint has been shortened by 8 mm. or so, with a silver insert placed in the barrel. The pad washers have been changed as part of the overhaul by Charles Roberts in 1978. No part of the embouchure or scale has been altered. There is a minor bump in the upper edge of the barrel on the rear of the headjoint. Dating Godfroy cylindrical flutes has always been controversial. Scholars have tended to be influenced by the desire to have their own flutes made at the earliest date possible, especially the crucial date of 1855 when Louis Lot split and set up his own shop. In fact, calculating the average number of flutes made between the dated instruments gives a fairly rational idea of the dating of all the Godfroy cylinder flutes. The development of the side G# key also gives an idea of the timeline, which fits into calculations based on average number of flutes produced. The dates that we can ascribe to serial numbers are: Serial #1=August, 1847 #802=May, 1862 (per inscription on flute) #1503=Sept. 1, 1878 (per date on case) Average flutes per year to 1862= 53 Average flutes per year 1862-1878=44 In fact, one would assume that Godfroy's market share and production would be affected by two events; one, the opening of Louis Lot's own shop in 1855, and two, the opening of the patent protection in 1862. Thus the difference after 1862 makes sense, yet a graph between 1847 and 1862 would not likely be a straight line, since increasing interest for the cylinder flute in fact did occur throughout the 1850's. Curiously, Godfroy's production seemed to exceed that of either Louis Lot or Rudall & Rose. For example, between 1855 and 1864 Louis Lot made 340 cylinder flutes (Giannini), or an average of 38 flutes per year. Rudall & Rose, with their new partner Richard Carte, had made 575 cylinder flutes by August 25, 1869, or an average of 26 per year. Returning to Godfroy we can extrapolate the rough dates for the known numbered flutes (many of the Godfroy wooden cylinder flutes are unnumbered). The earliest silver flute with Godfroy's name is in the Duplaix collection, and bears the oval cartouche of the wooden flutes. The earliest known numbered silver flute, #465, would have been made in 1855, the very year that Louis Lot left Godfroy's. Since our system is not pretending to be absolutely accurate, this flute cannot be said to have been made either before or after Lot's departure, but it was made during this period. The next known silver flute, #600, would have been made c. 1858. This flute has the only known "developmental" side G#. Curiously, Louis Lot does not mention a side G# until 1860 and his flute #479. It is probable to assume that 1858 is a reasonable date for Godfroy #600, giving Godfroy the likely credit for first applying the side G# to the metal flutes. The first mark that Godfroy used on silver flutes was clearly a continuation of his wooden flute stamp. The second mark (previously thought to be the first), was used on #465 (c. 1855), and last used on number 680 (c.1859-1860). The third mark, with a Gothic "Paris", was first used on #657 (1858-1859) and is last seen on #1158 (c.1870). The final mark, with a capitol PARIS, is first seen on #1313 (c.1873-1874). Curiously, there is an overlap between stamp designs 2 and 3.

Pitch: Built with the French scale of A=435, yet plays beautifully at A=440 thanks to the trimmed headjoint.

Case: In what appears to be the original case, with Godfroy's name and the address Rue Montmartre 55. 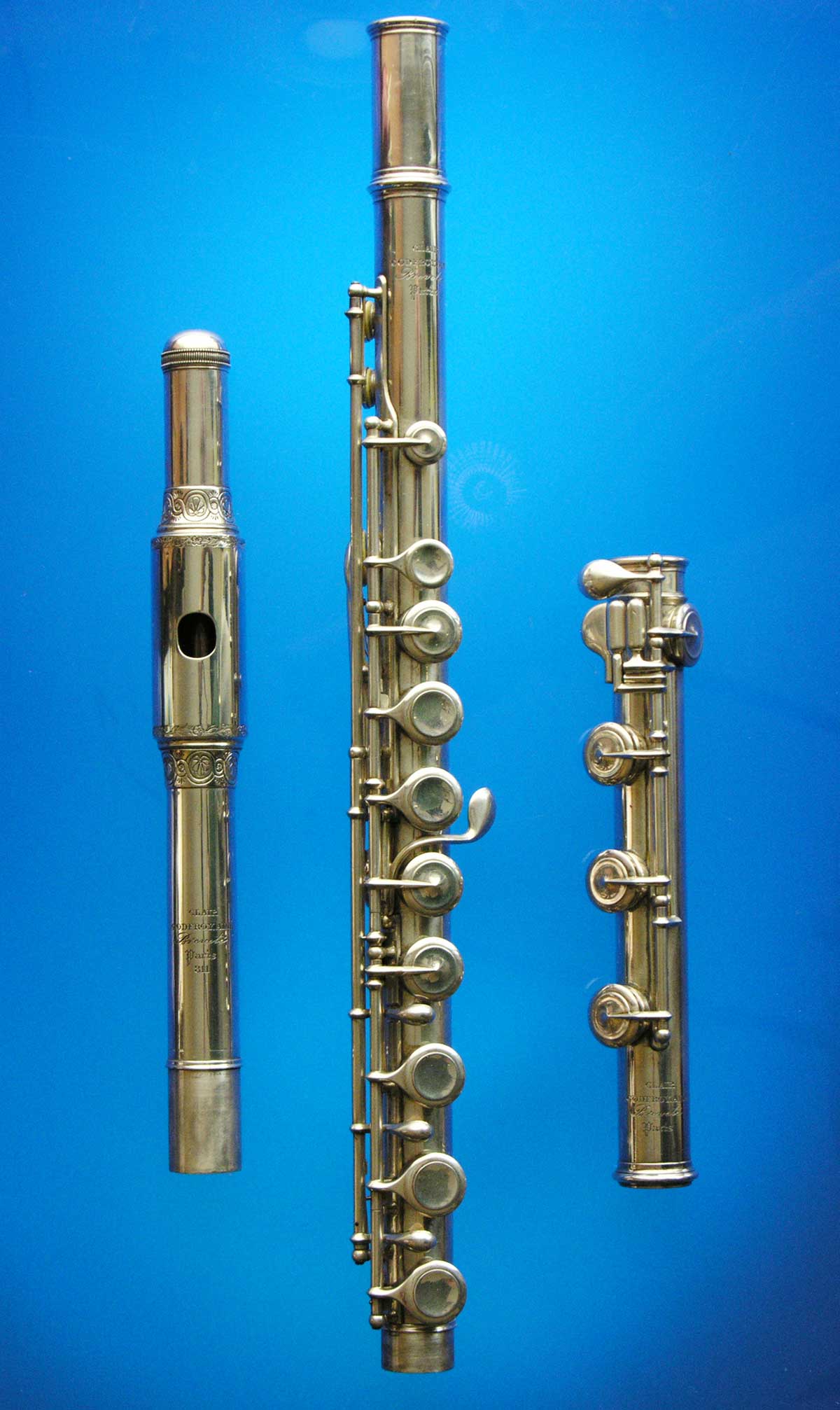 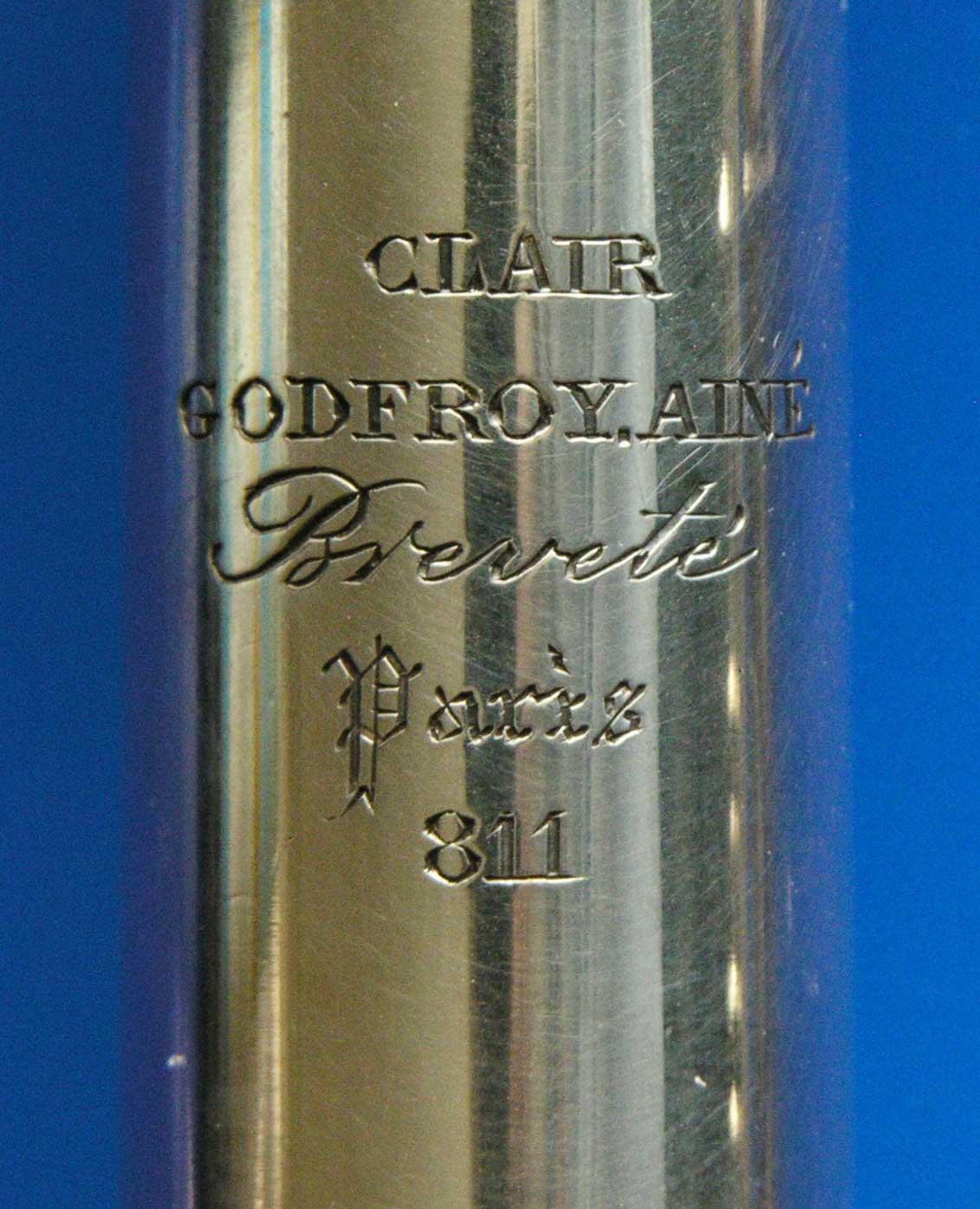 This instrument is very important in dating the Godfroy flutes. It was made specifically for English tastes, with covered keys and a barrel embouchure. This flute helps verify the date on flute #802, which is engraved, "Exposition de Londres 1862". We were never sure if the 1862 text was applied to an earlier flute, but an English model from the same few months strongly suggests that both flutes were indeed from 1862, and were associated with the London Exhibition. 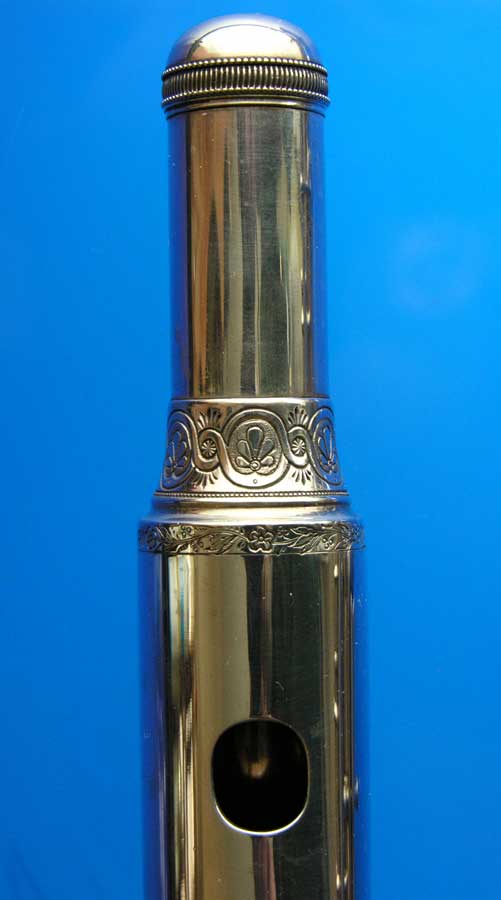 This exquisite flute is beautifully engraved around the barrel embouchure. All three makers of the cylindrical flutes used barrel embouchures at first, since the silver tube was too thin for an edge to blow against. Boehm originally used boxwood or ivory, and it appears that Godfroy and Lot were the first to cover this with silver. Once the lip plate was fully adopted by Godfroy and Lot around 1855, they apparently stopped making the barrel embouchure, while it remained popular in England. This flute is a special model for the English market.

Godfroy flute #811 in the apparently original case. This exquisite flute shows that Godfroy retained the skills to make the most beautiful flutes even after Louis Lot split and started his own shop. 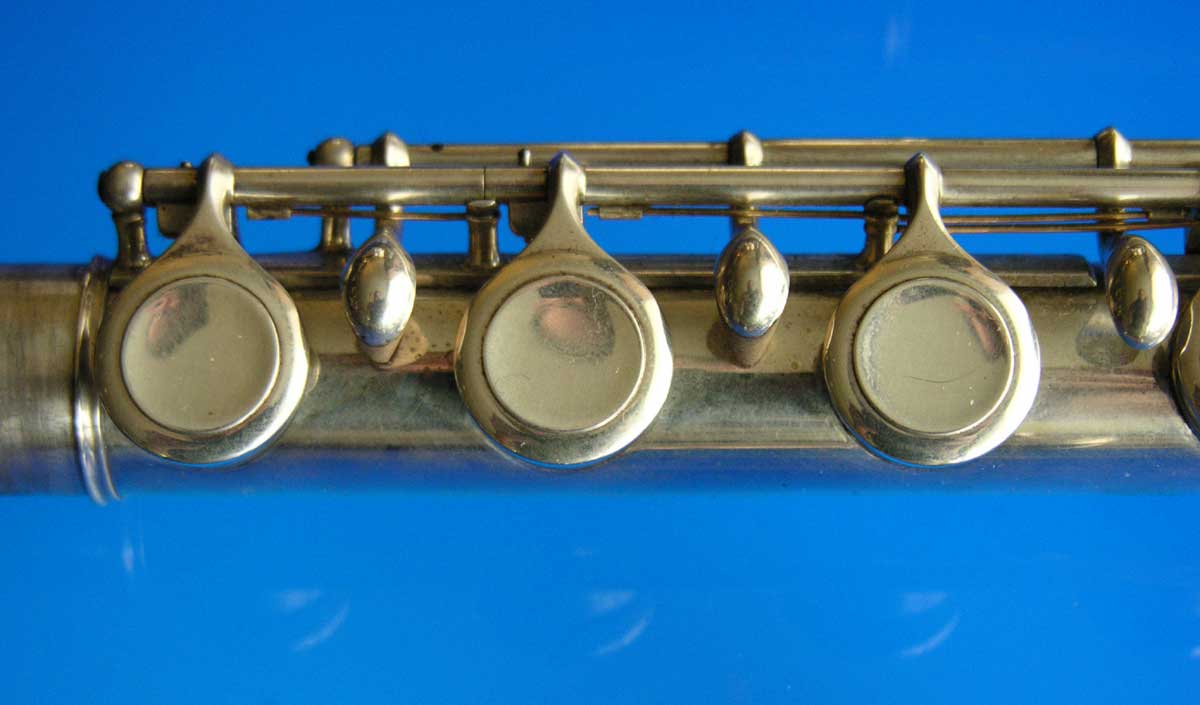 Godfroy did not just plug the holes on their normal keys, but designed a whole new key for this special flute. All three trill keys are on the back rod, making an elegant way to get around the side G#, yet the strap had to be cut under the upper trill key (for the thumb key).

Godfroy's beautiful B foot. Our inventory of Godfroy cylinder flutes now reaches 43 instruments, of which at least 8 have the B foot (one has a foot to Bb!). 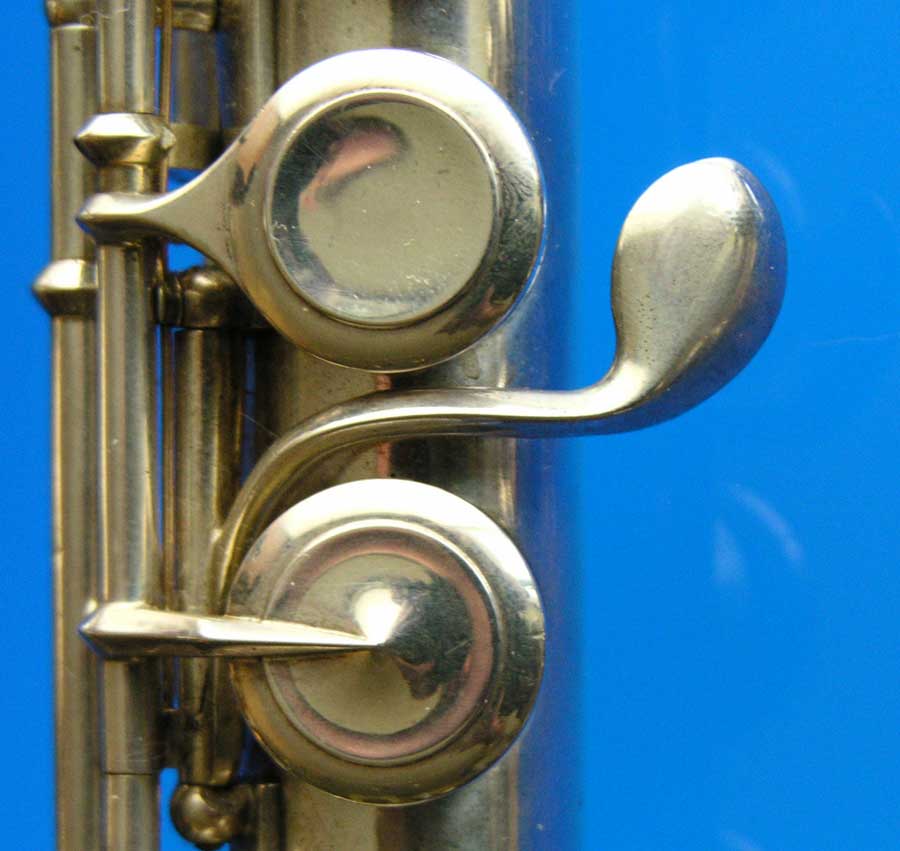 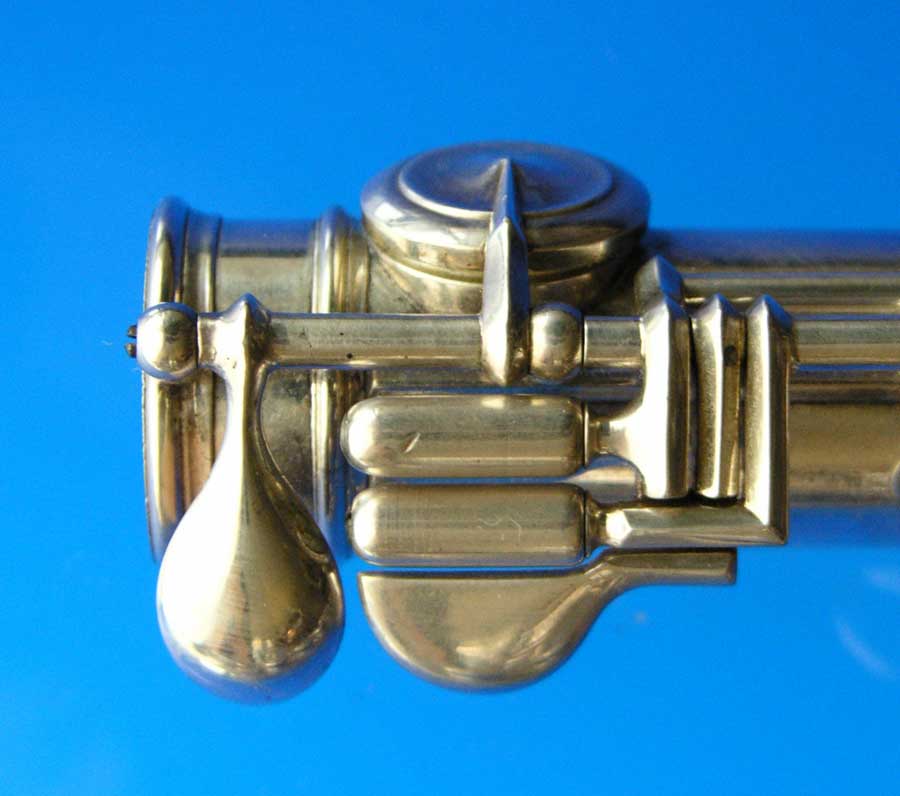 Everybody's footjoints are unique, and they change over time. Here we have a clear view of Godfroy's touches, as well as the sloping wall on the D# cup. 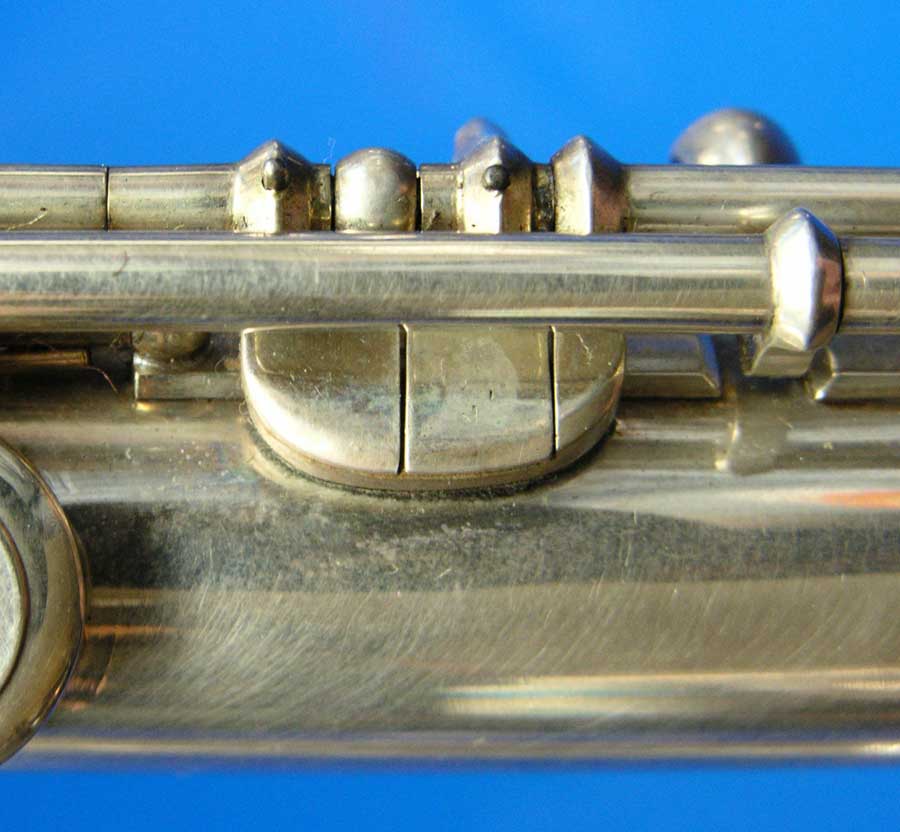 The backcclutch is the heart of the Godfroy/Lot mechanism, and also the first place to see sloppy repair work. Here we see a perfect, undamaged backclutch of the sleek, matured profile. 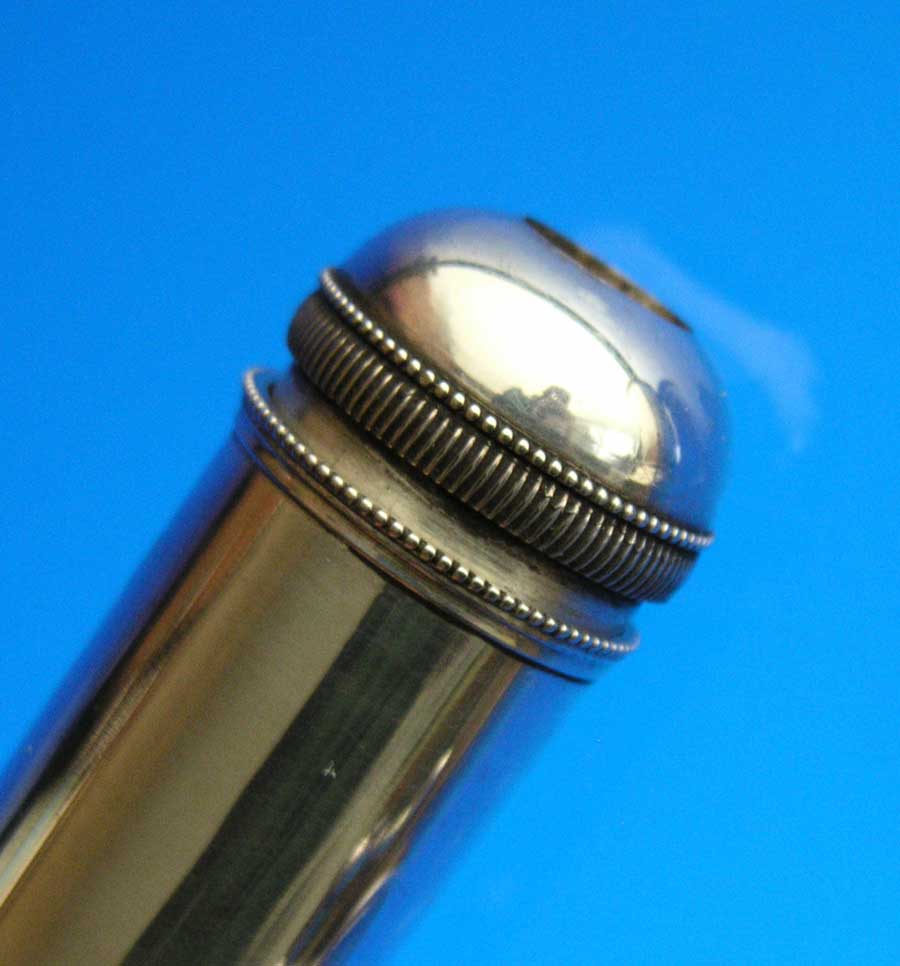 Godfroy's craftsmanship was exquisite, as can be seen here where the bottom ring of the crown is attached to the headjoint tube. This separation becomes invisible when the crown is screwed down. Only Mendler could match this work! 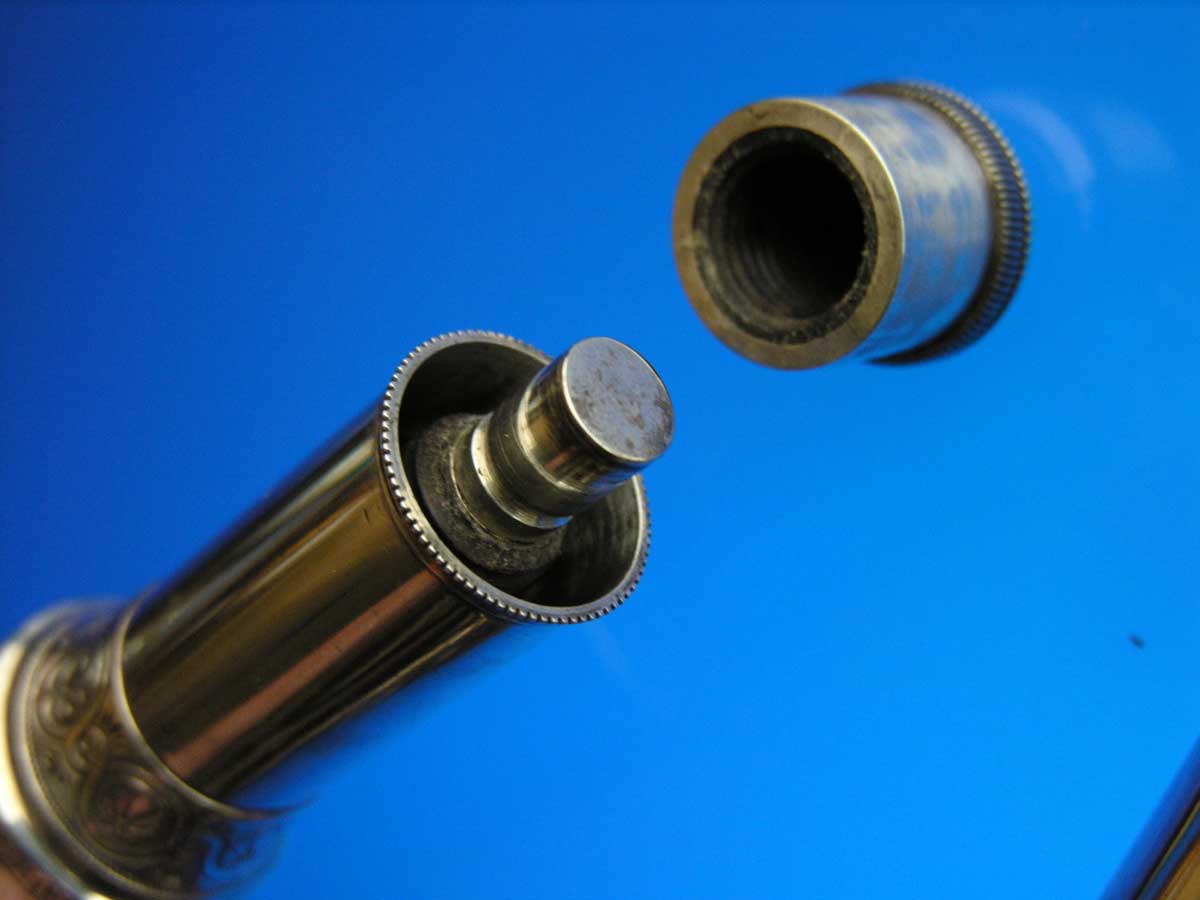 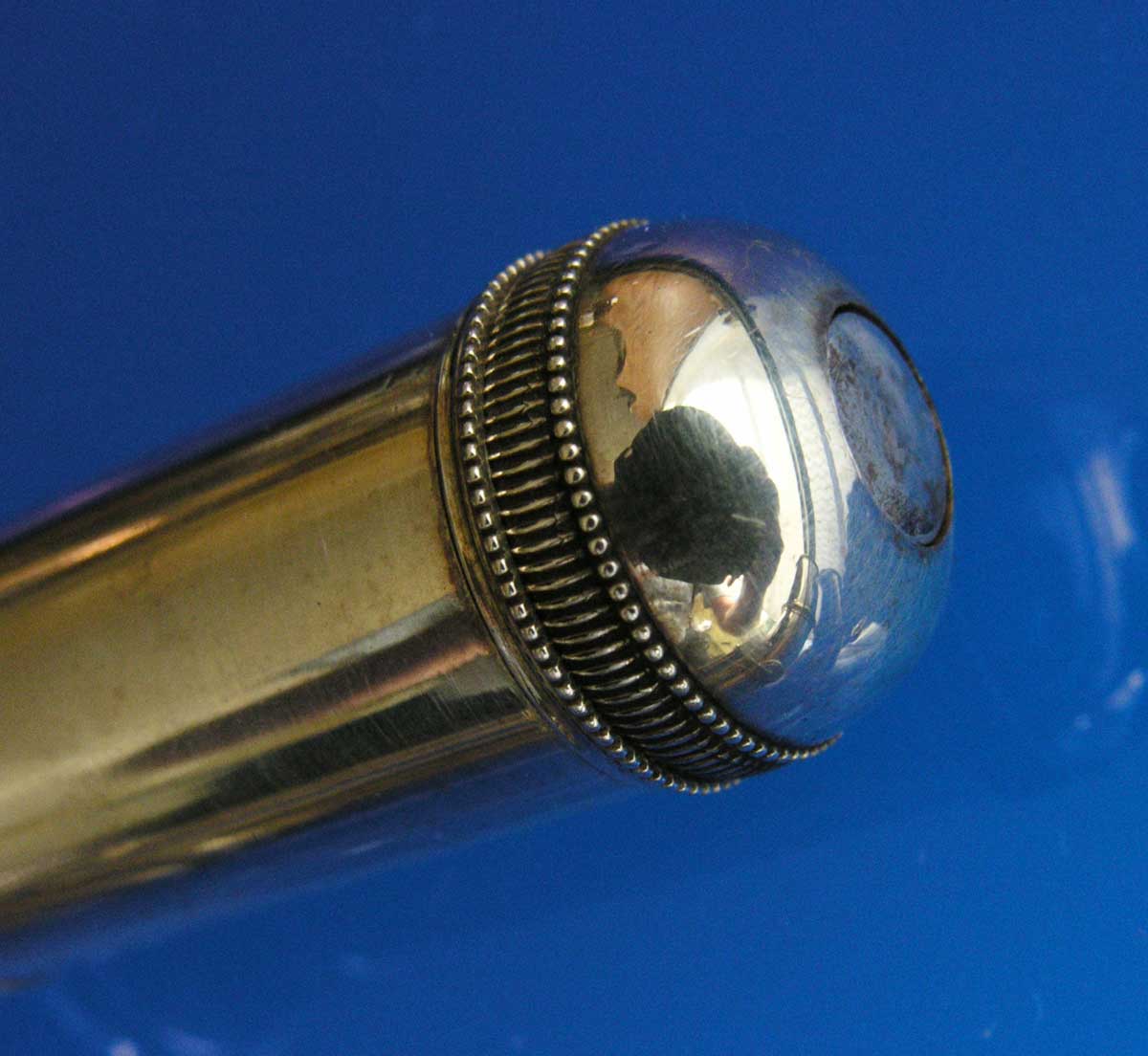 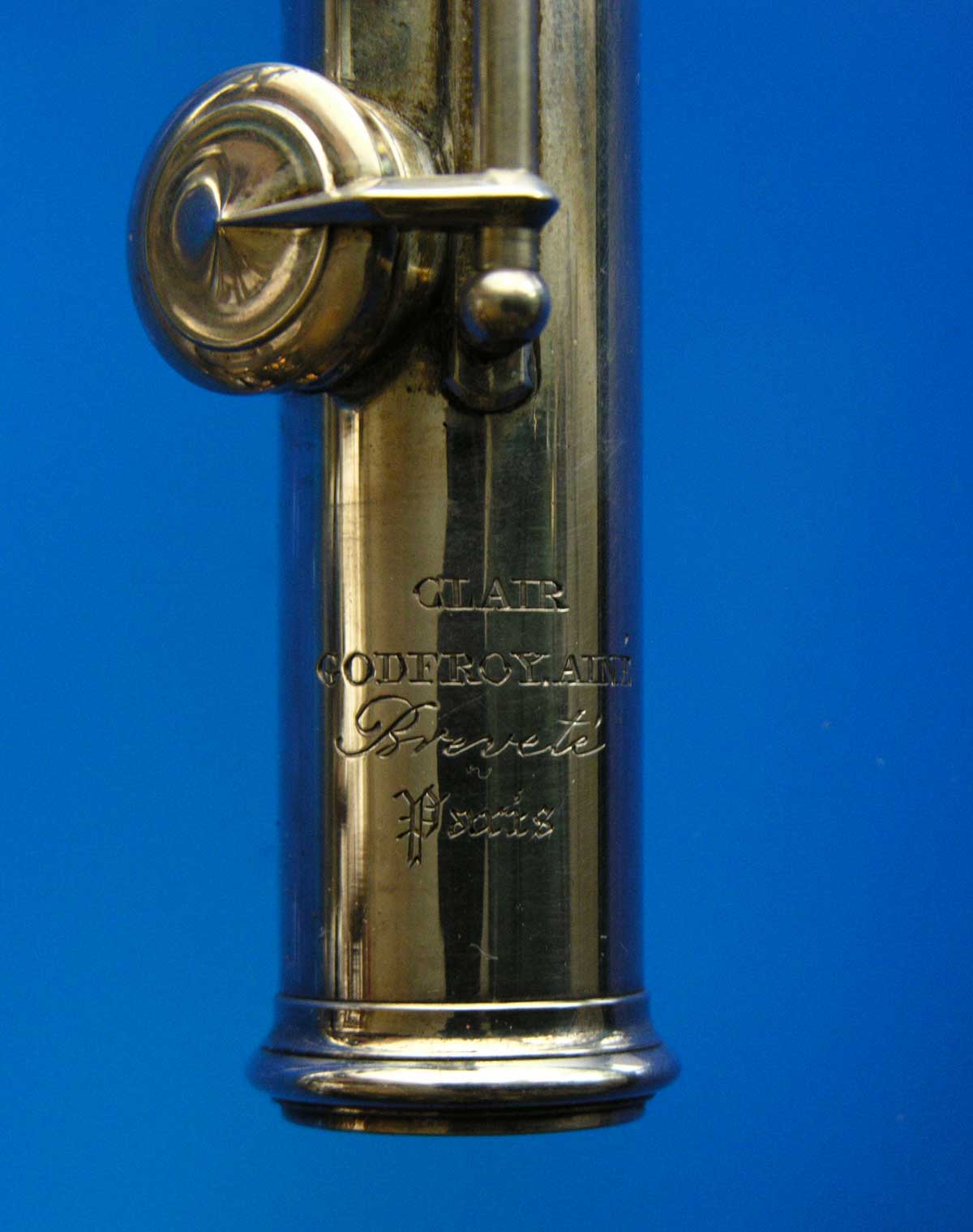 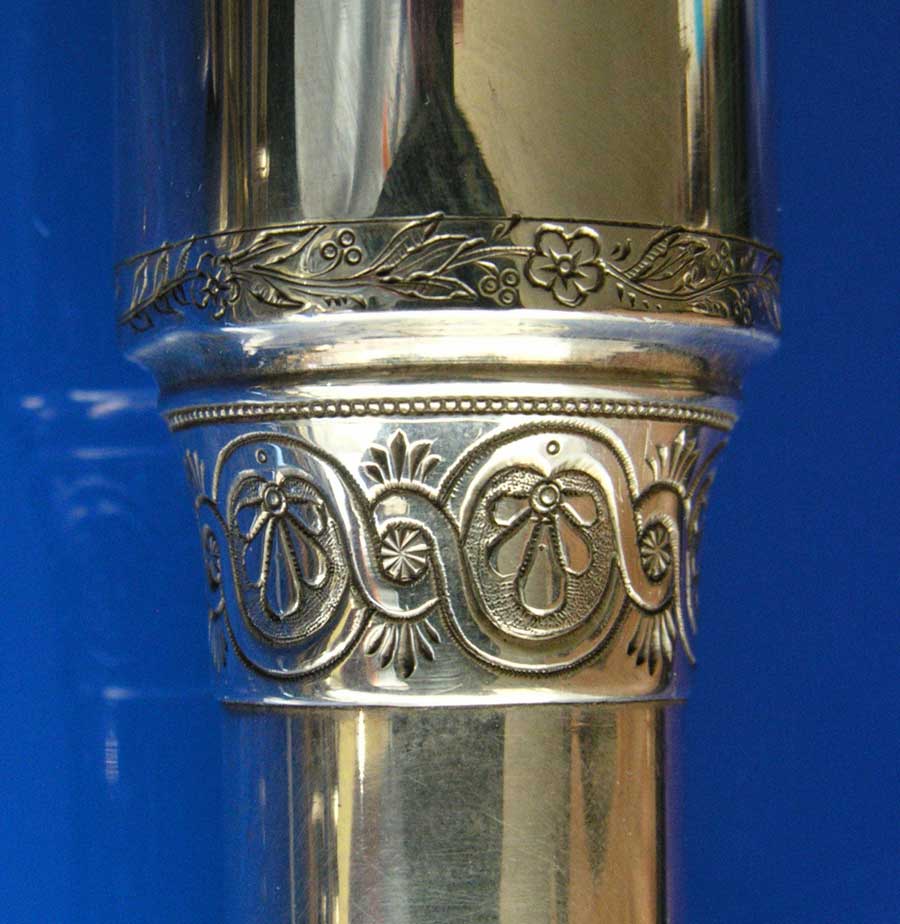 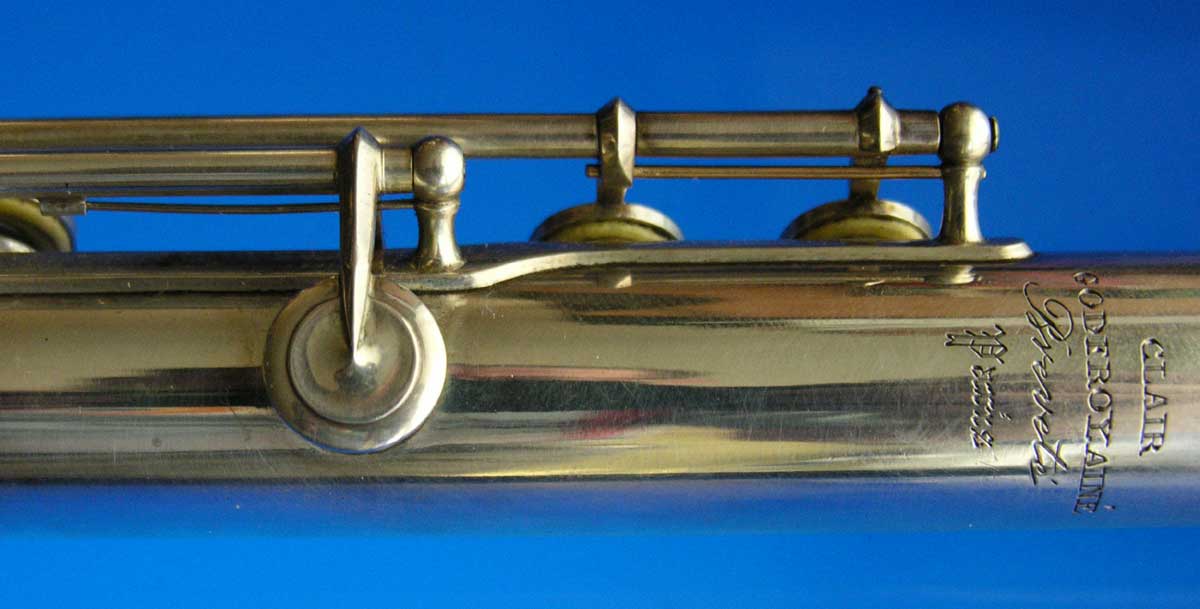 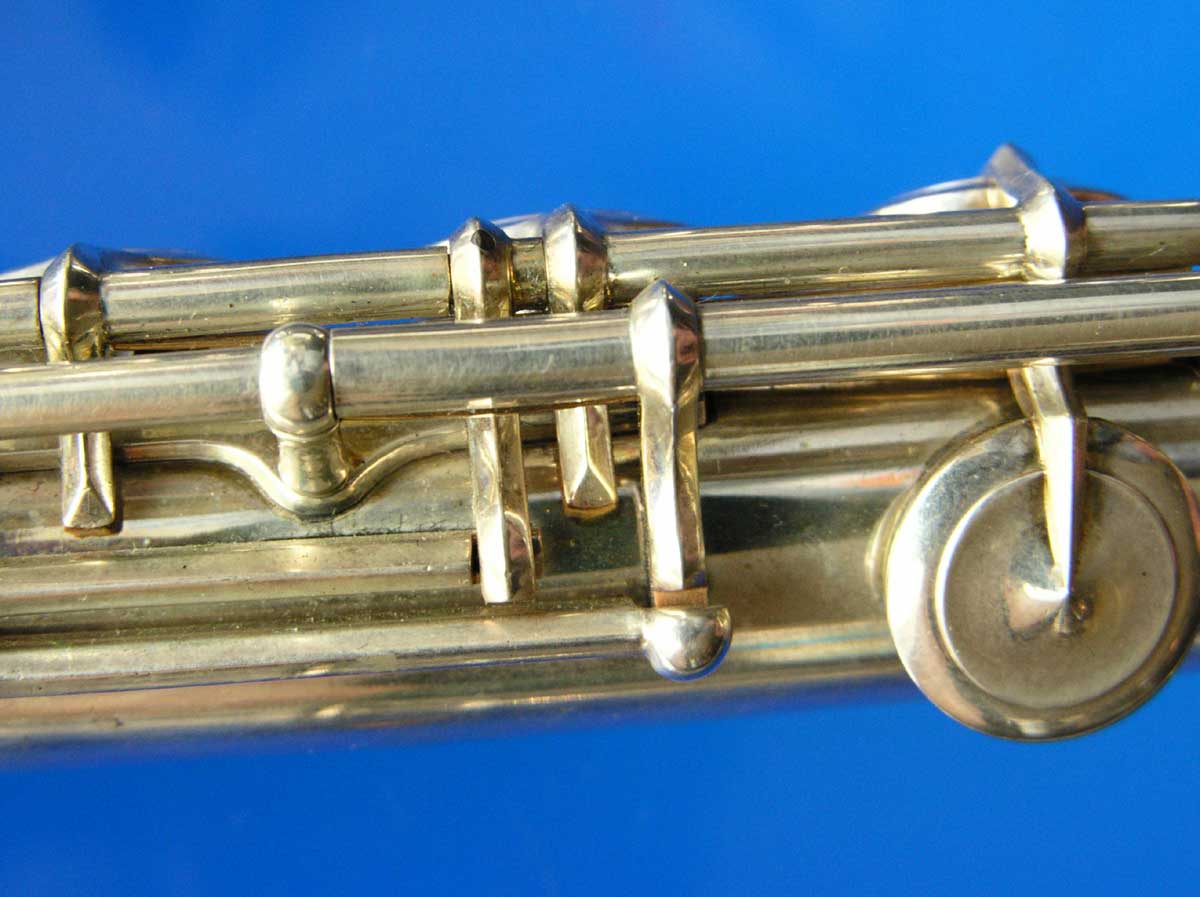 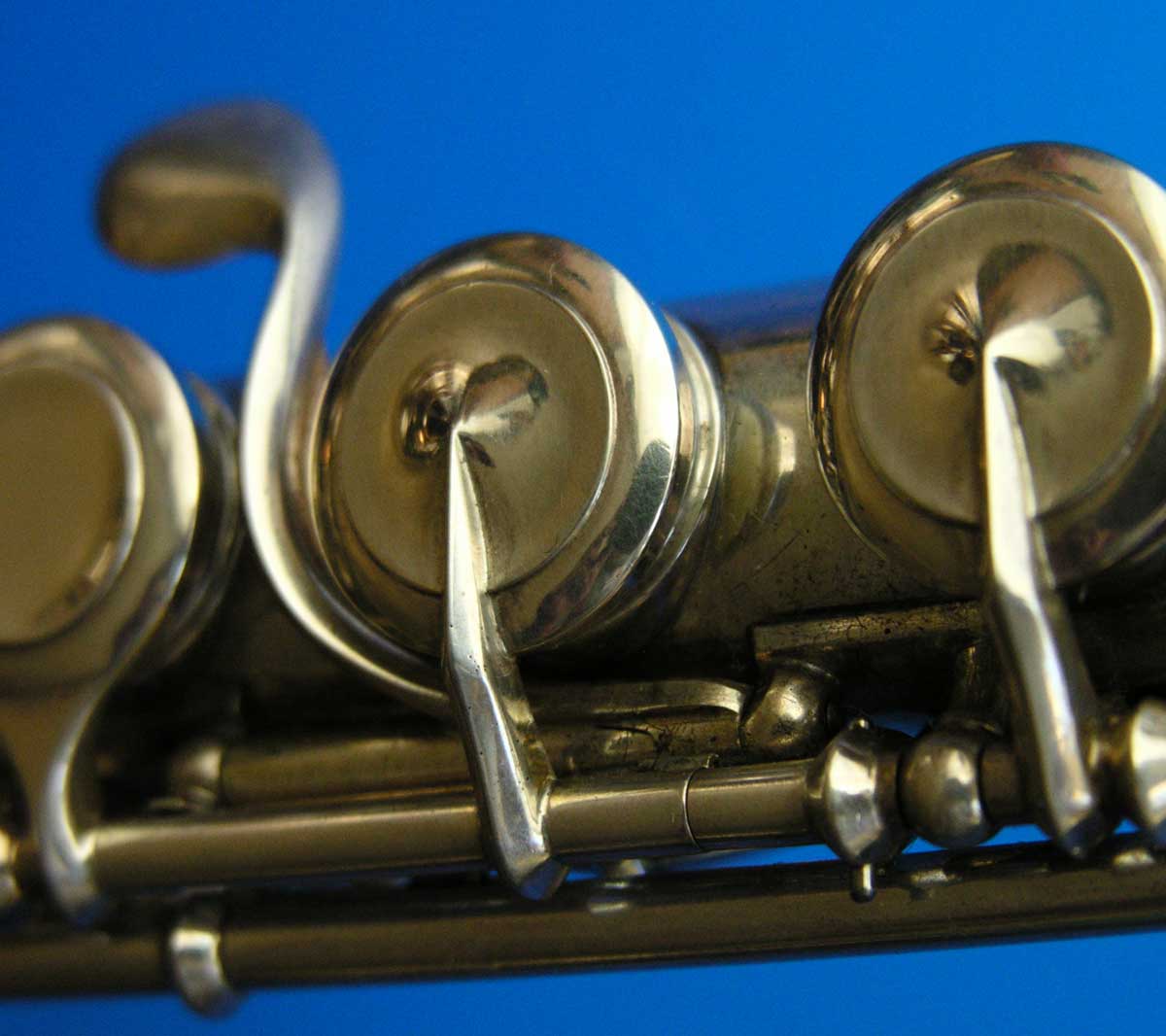 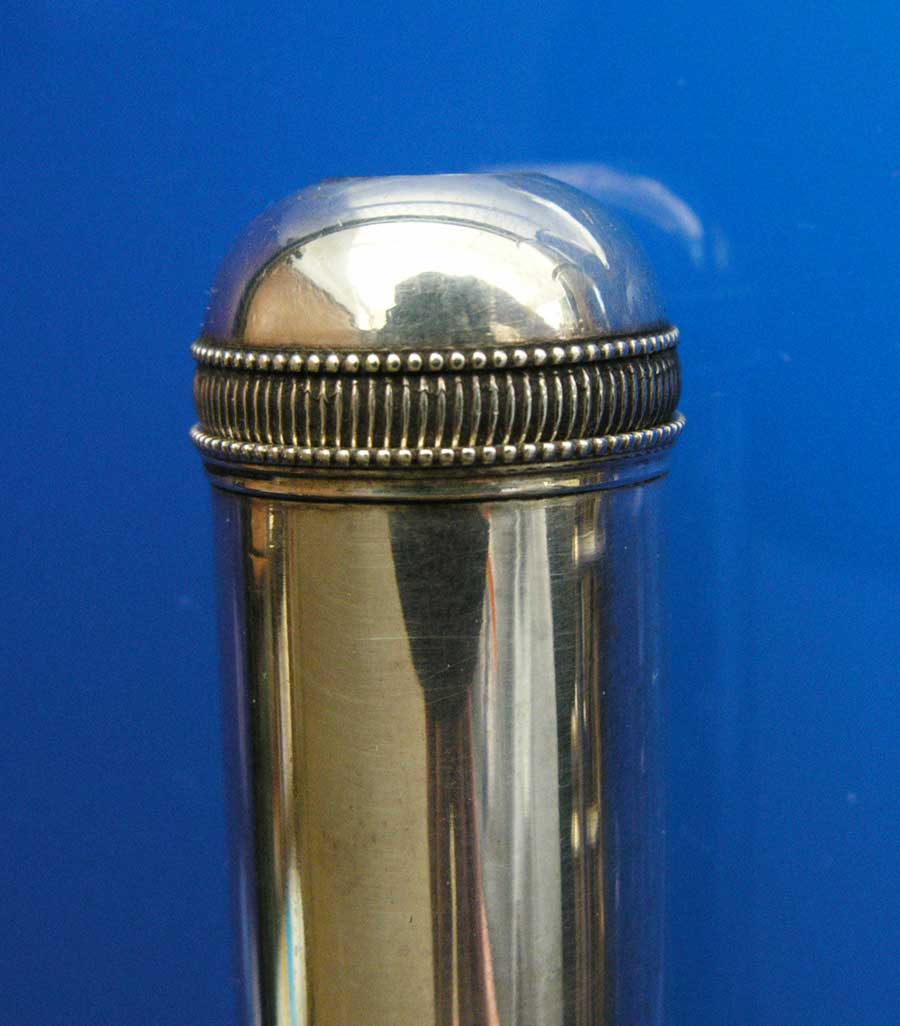 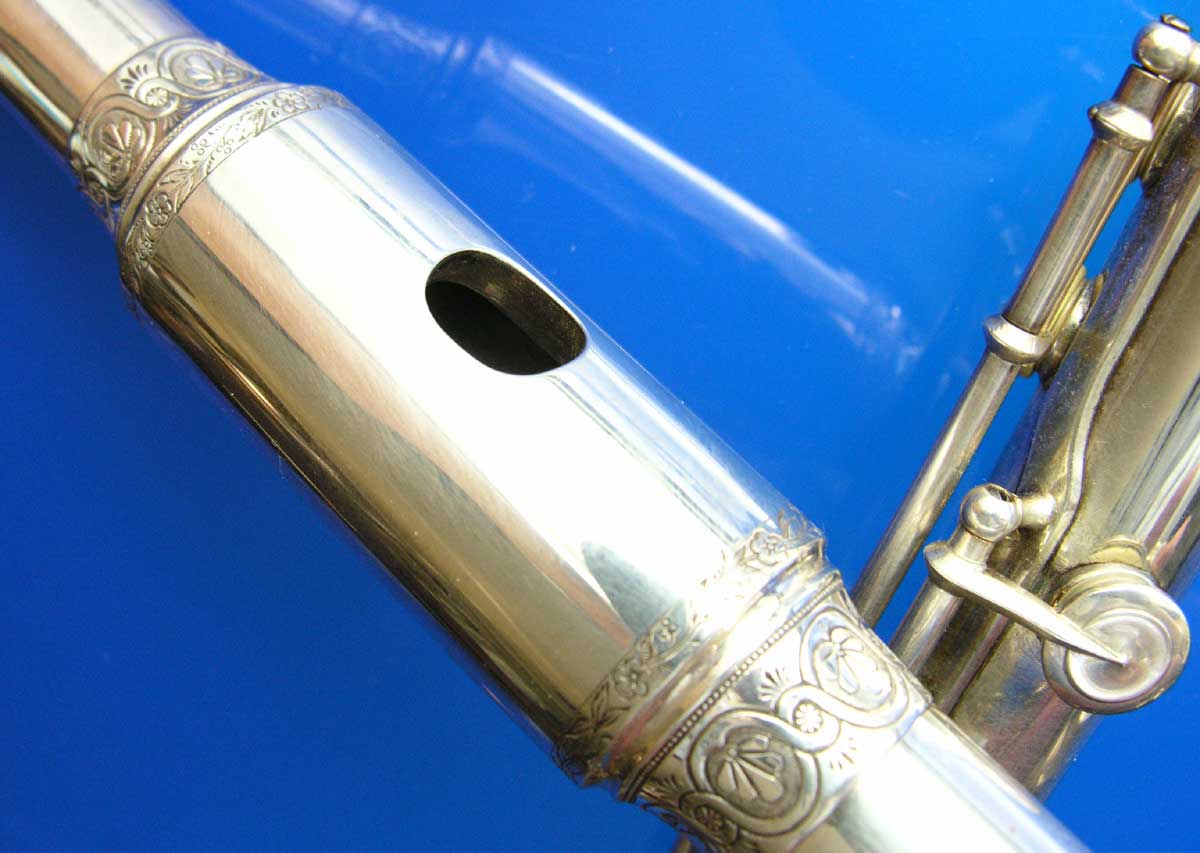 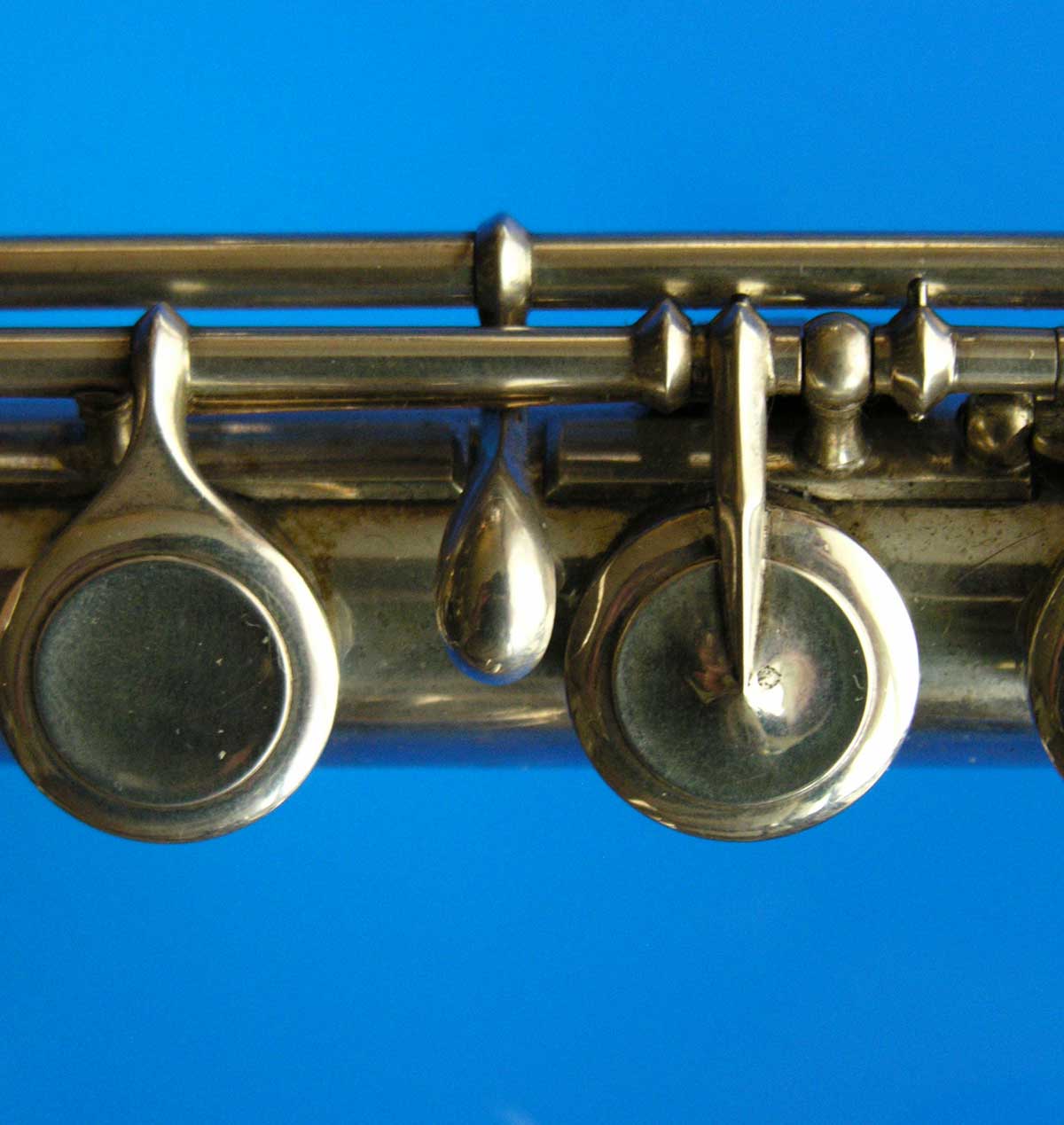 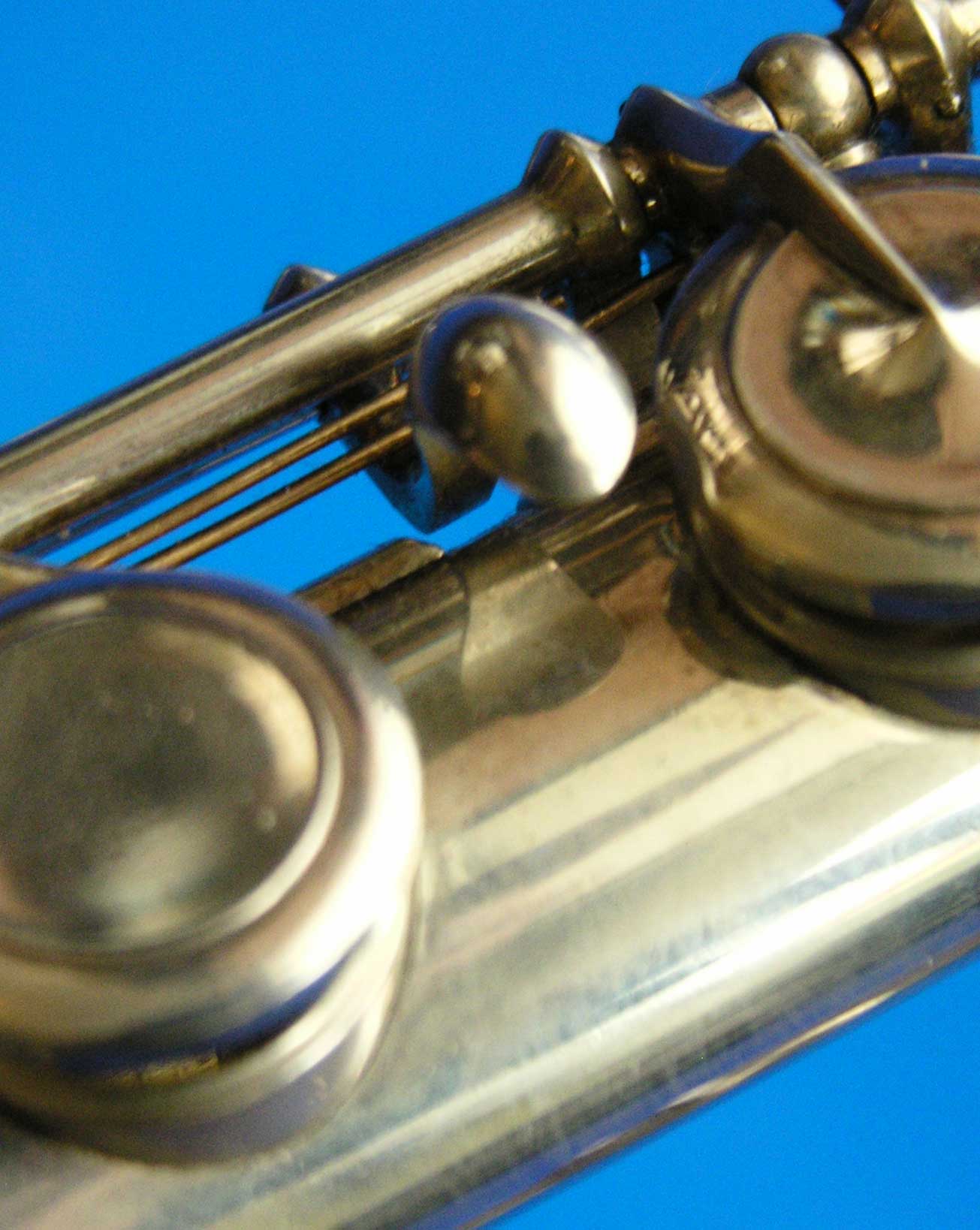 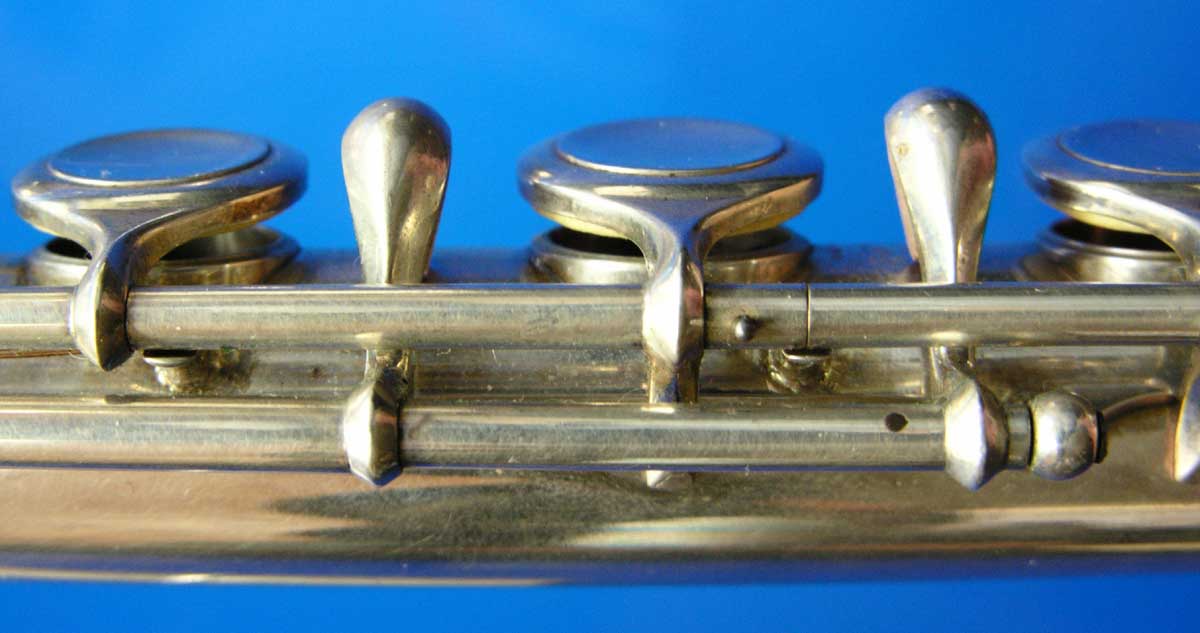