Manufacture Date: Made c. 1908 (Shorey). Auguste Bonneville's business appears to have continued their numbering series even during the times that Bonneville's son was part of the business. They were especially well known for their plated flutes, such as this perfect example. The firm began in 1876. We estimate a production of 100 instruments per year. Number 3220 would therefore have been made roughly 32 years after 1876, or c.1908.

Comments: Here is a perfect opportunity to experience the famous sound and feel of the Bonneville plated flutes, which have been highly praised over the years. Bonneville made flutes with his own very definite idea of tone. He valued more texture in the flute-tone than the Lot company. His instruments feel like a cross between the wooden flutes of Rudall & Carte, and the silver flutes of Lot and Godfroy. Since these are our two favorite flute styles, we are not surprisingly enchanted by this perfect Bonneville. Indeed, this flute has a tone so rich it is like cream from a Jersey cow. We used to have Jerseys in Maine. I would describe this flute as the equivalent of ice cream made from fresh Jersey cream and fresh Maine strawberries. It is smooth, yet textured with strawberries, and a hint of vanilla. Happily, the high end seems to take to this quite nicely, unlike my own upper half. The bottom of the flute is more than nice; it is tremendous. Not of volume without soul, but of texture and emotion. Is Bonneville an Emo flutemaker? Scholars have not yet addressed this issue.

Material: This flute, in practically unused condition, is of silver plated metal. The instrument is so little used there is no wear on the plating, except for a dimple under the thumb key. The springs are of gold, except for the little one on the closed G#, which is the usual blue steel. It is hard to believe that the springs have been replaced, but this seems more likely than that the gold springs are original.

System: This is the standard French model flute, with C foot, closed G#, and the old trill to the thumb B. Bonneville carried on the tradition of elegance established at the Godfroy shop, where he had worked. The crown is beautiful. The keywork is sculpted with unique character. Bonneville's system is mostly different from Godfroy and Lot in the shaping of his finger experience. Bonneville wanted a more practical flattened event, especially at the footjoint ,G# and thumb touches. He has achieved this with great artistry. The sweetest thing about the mechanics of this flute is an absolutely unique, cute little set screw on the floating pillar for the trill key rod.

Condition: The condition of this flute is almost as new. It has been repadded, but probably only once or twice. No one has ever buffed or polished this flute, and the keywork is all as fresh as new. A very tiny bit of wear in the plating is on the bottom edge of the thumb key. I did not see this; it was pointed out to me by David Chu, who remembered from 10 years ago that this was the only sign of wear on the flute! The last overhaul was performed around 1997 by David Chu, well known for his beautiful work on old French flutes. The instrument has been used enough since that time for the upper thumb key to wiggle a bit. 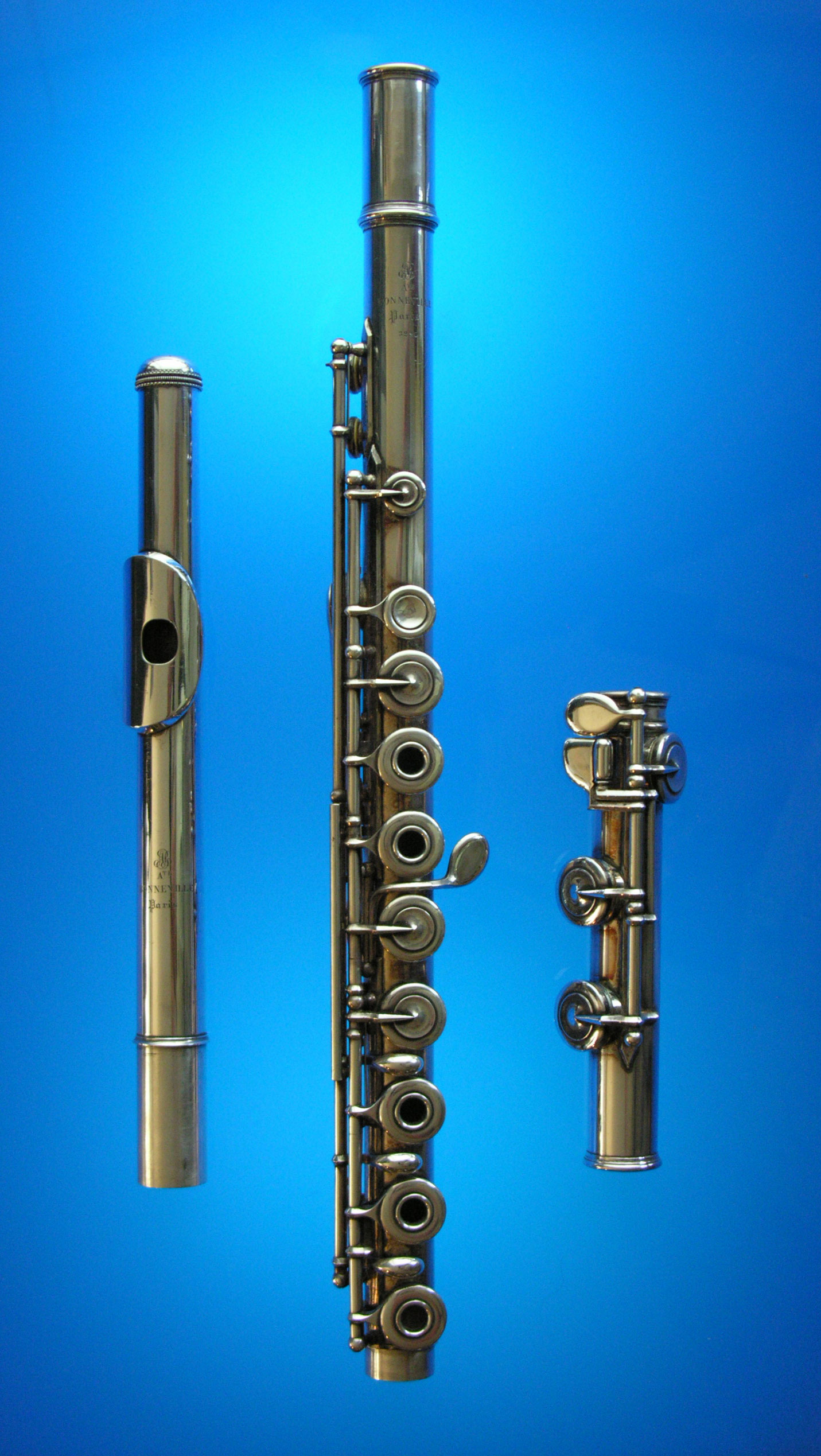 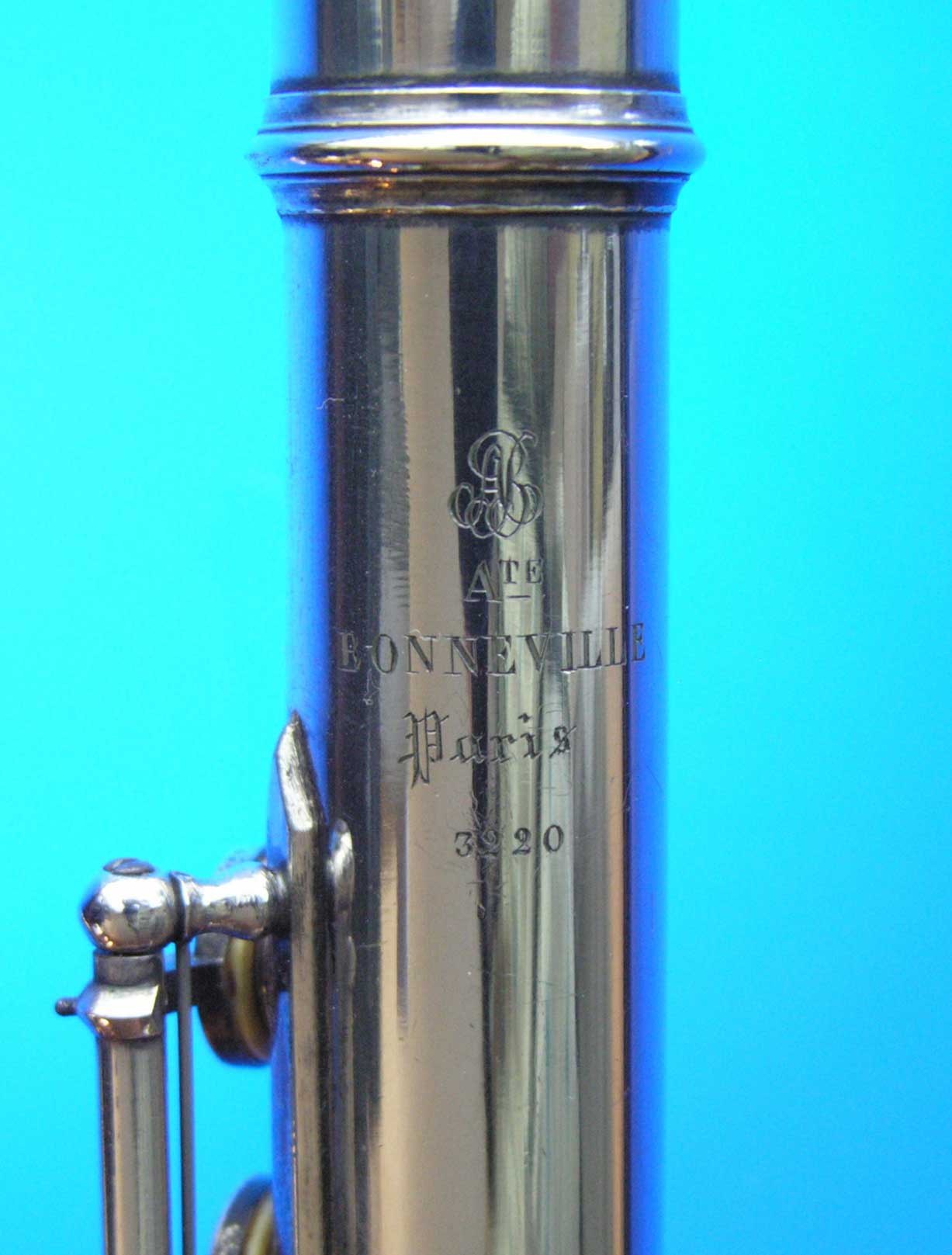 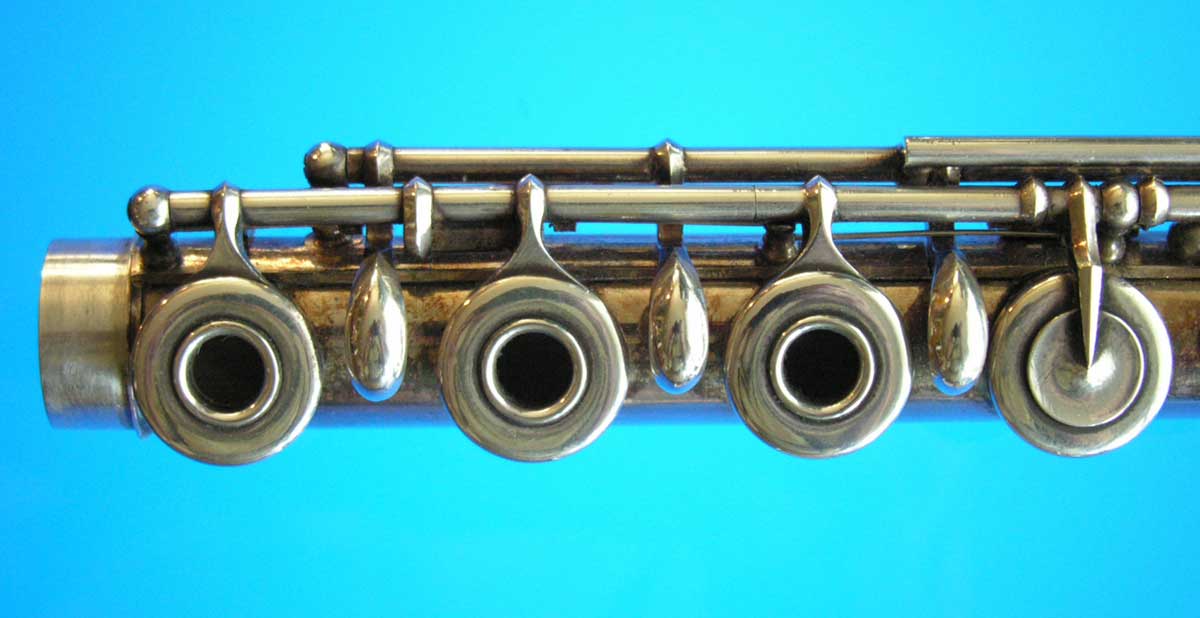 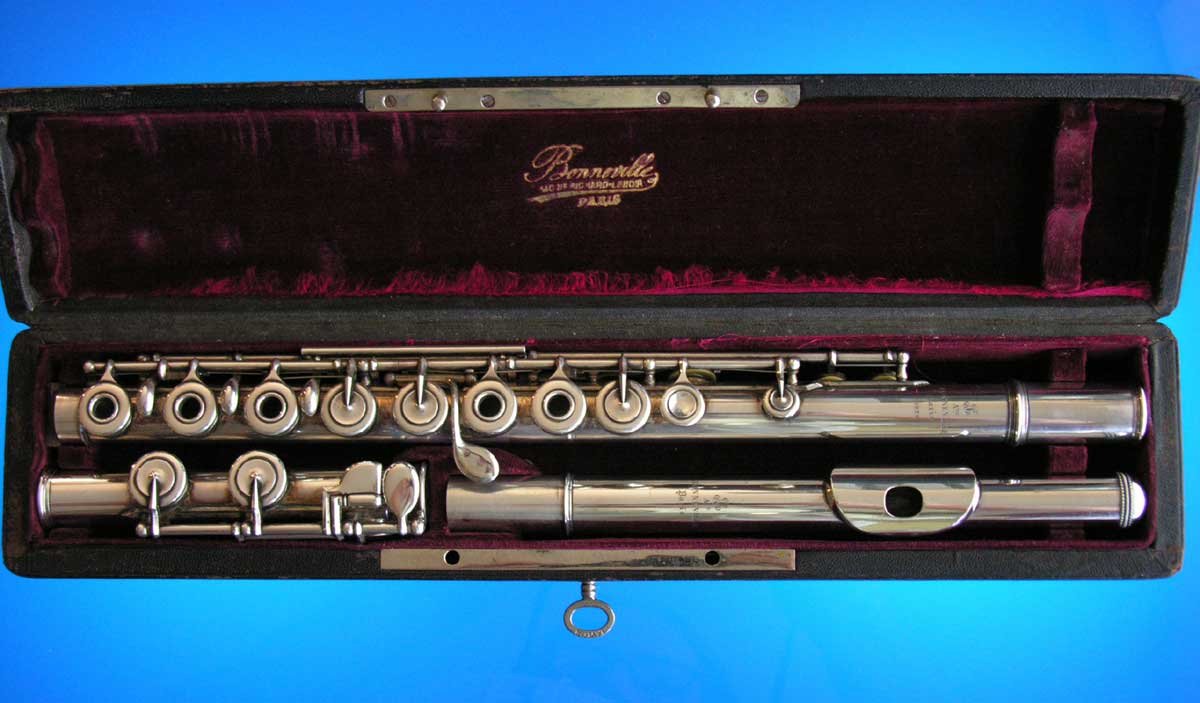 This extraordinary plated Bonneville is in practically perfect condition, and plays like an angel. 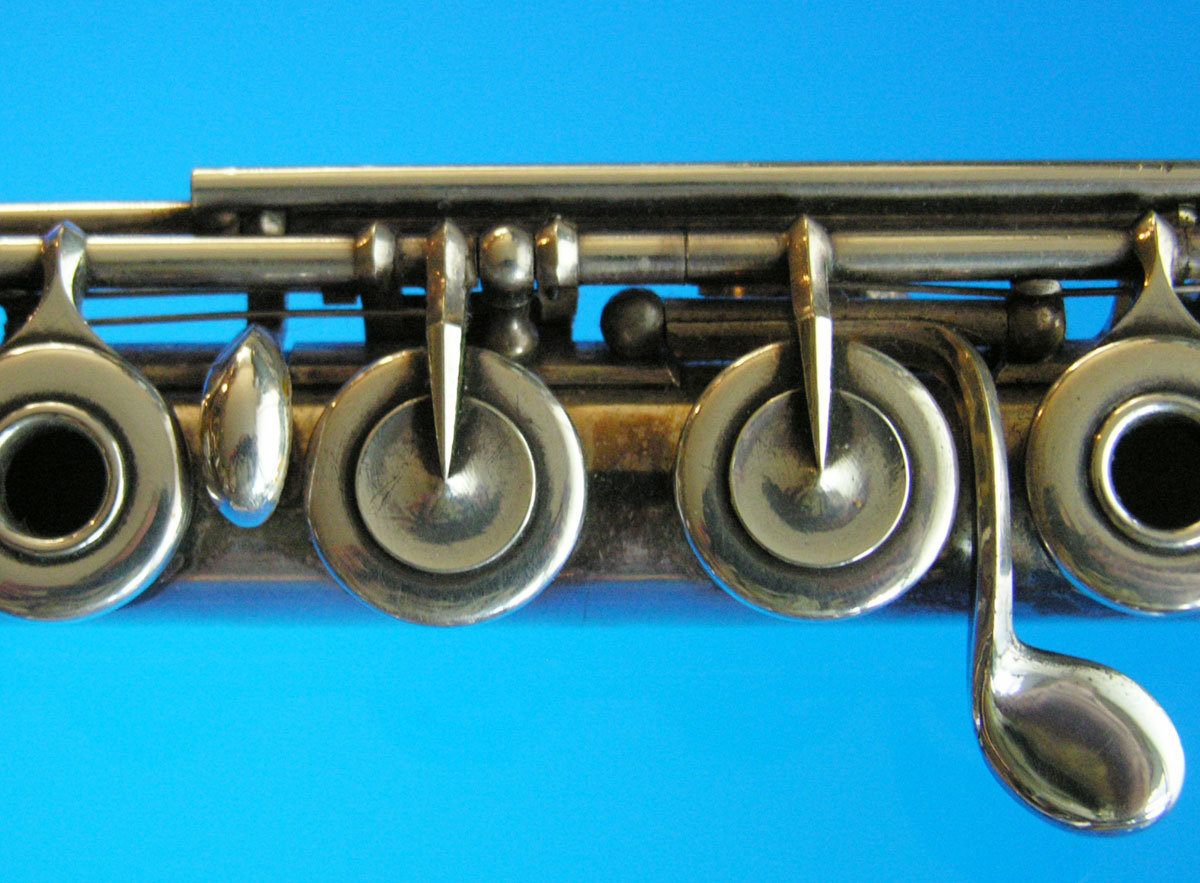 The third trill key, at left, trills the thumb. Bonneville's G# touch is slightly flattened on top, for his signature "smooth" experience. 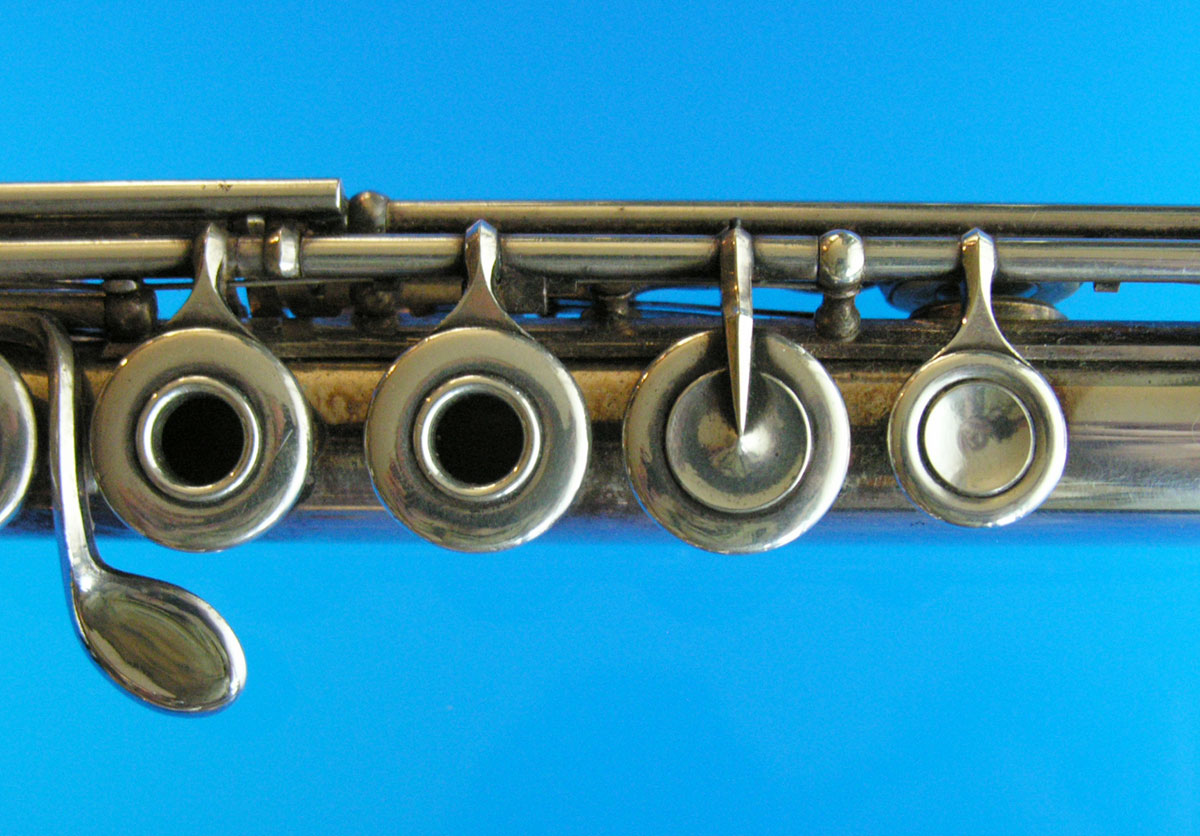 There is no wear in the plating. This view of the let-hand mechanism shows a patina of tarnish under the keys, where it is hard to wipe. 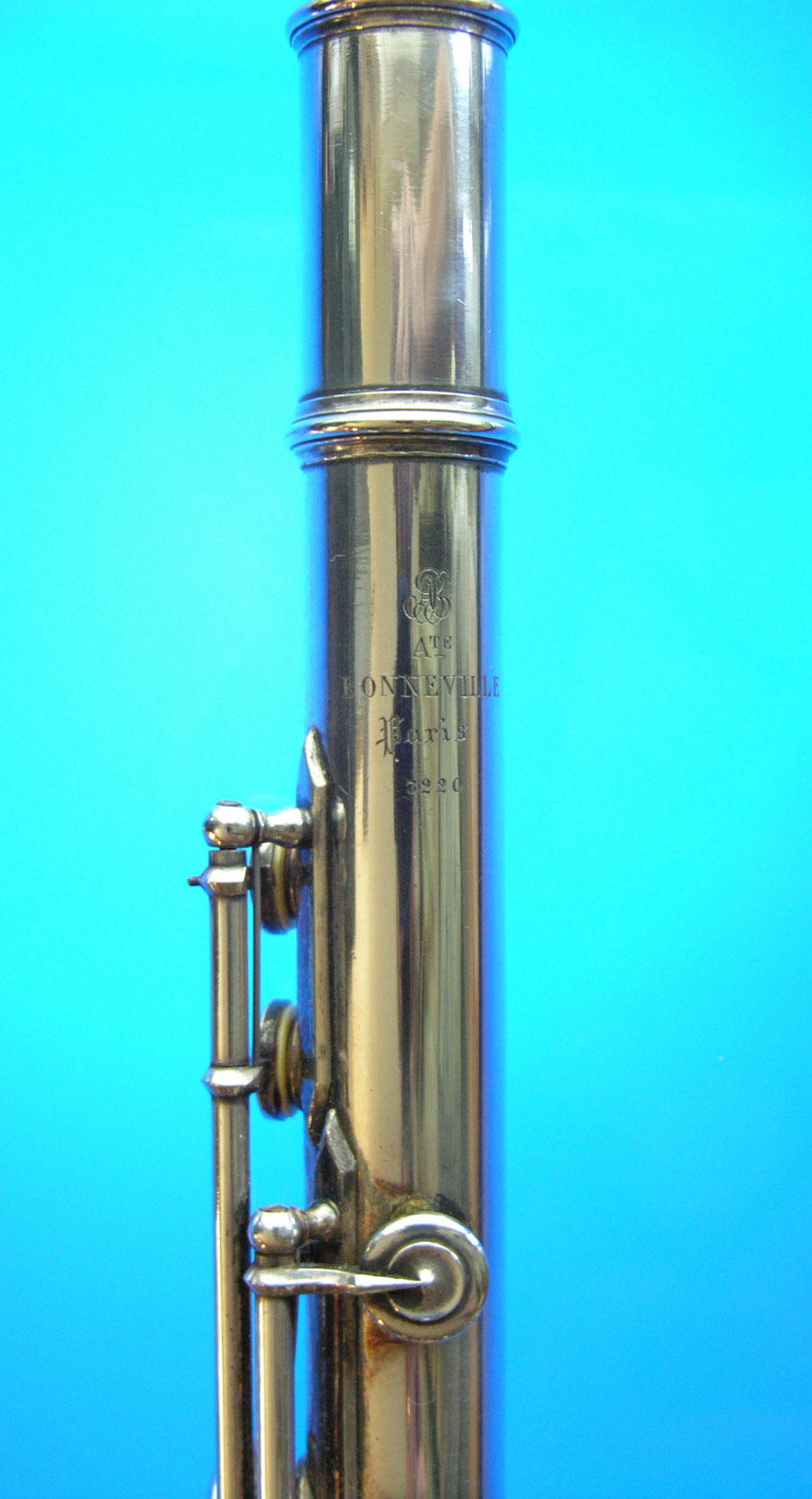 Bonneville split the strap at the trill keys as part of his movement from the old Godfroy mechanism. The pristine quality of this flute can be seen at the stamp.

The headjoint appears perfect. Since the flute is plated, any alterations would be visible. The 10 x 12.1 embouchure gives a full and luscious tone. 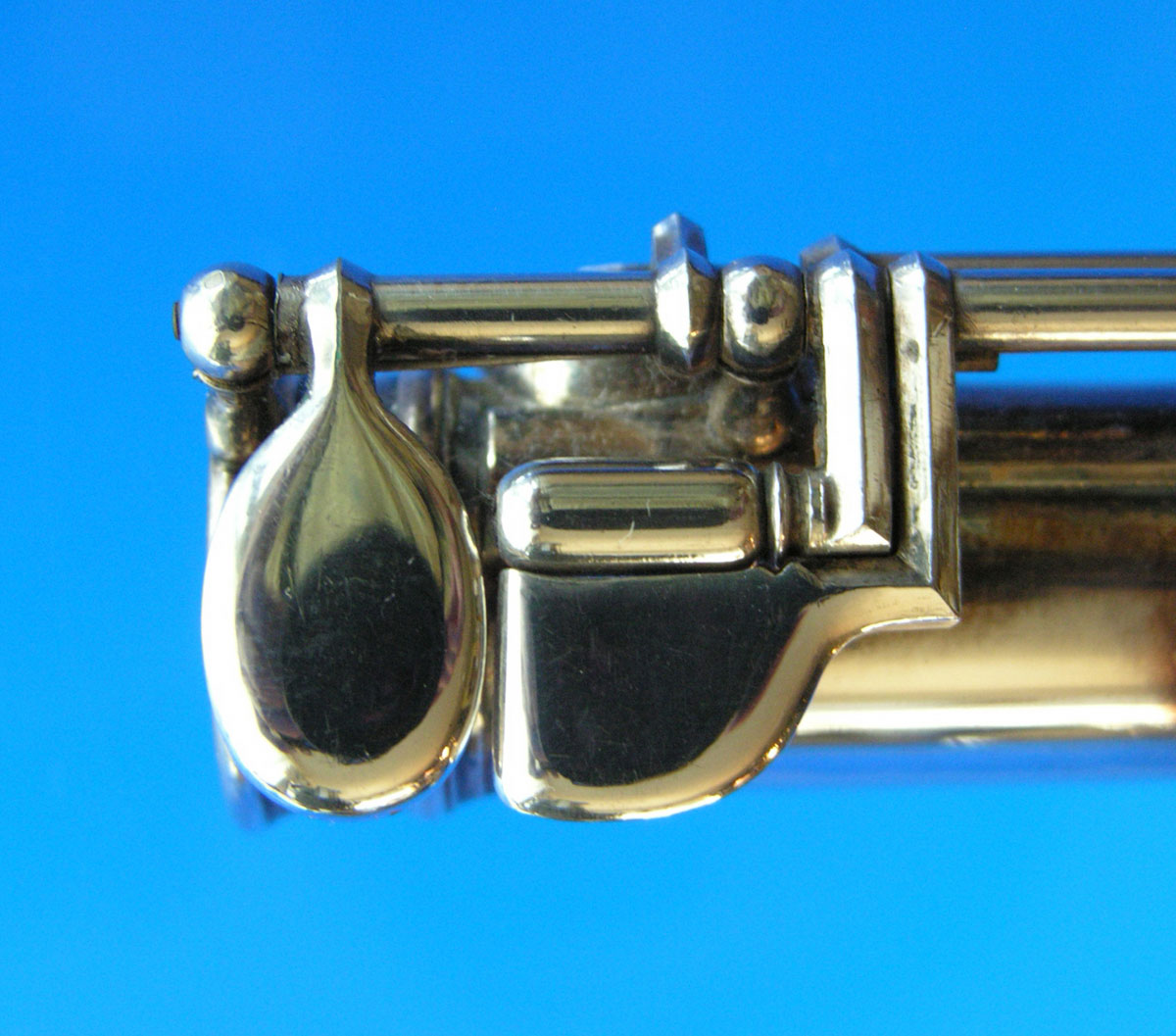 The top of Bonneville's D# key, like his G# key and others, is flattened, even while the aesthetic is curvaceous.

Bonneville's complete adoption of the Villette mechanism is seen on his pinless foot, where the rod for C doubles around the C#, and all the clutch action is at the touches. 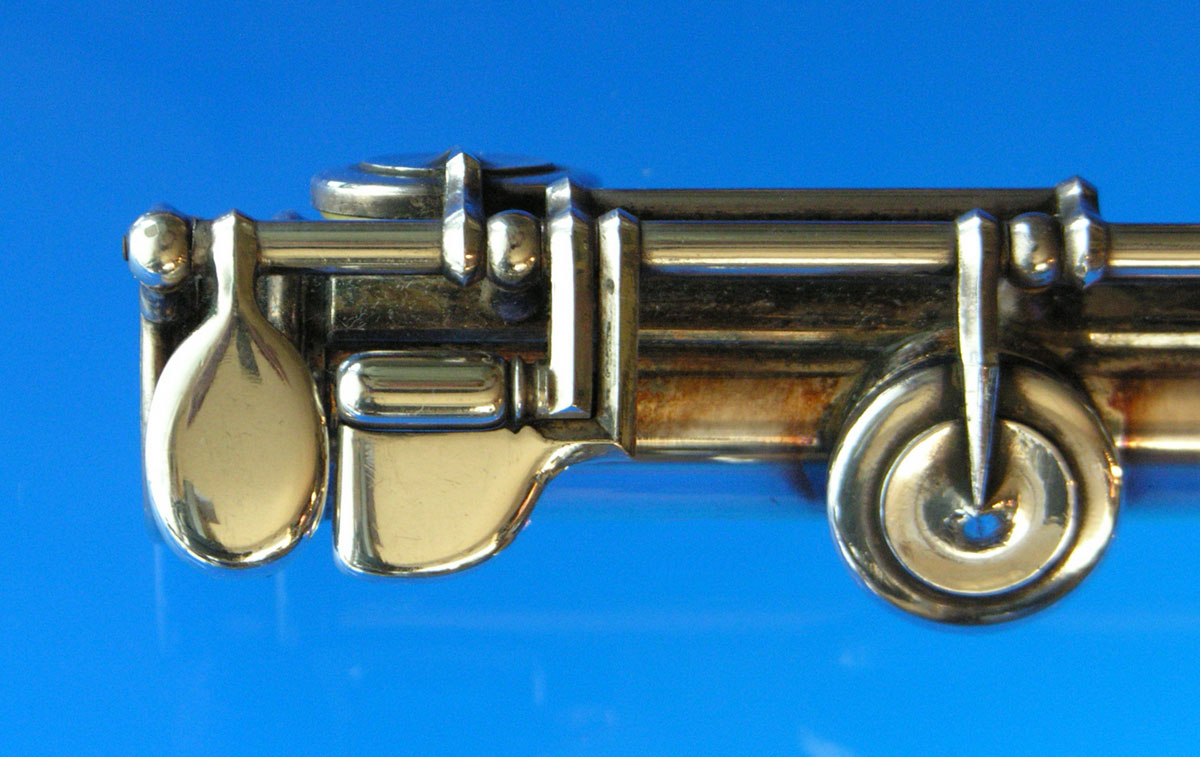 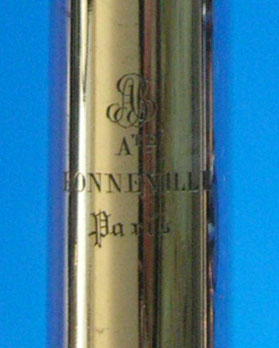 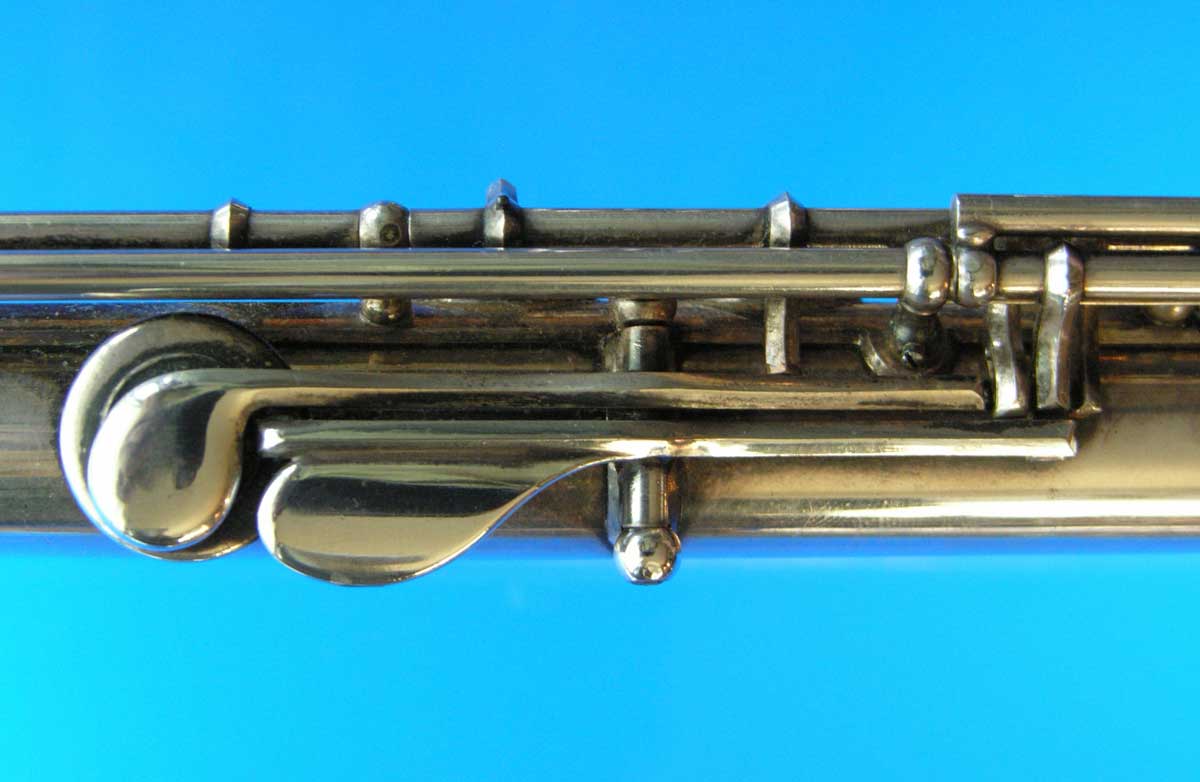 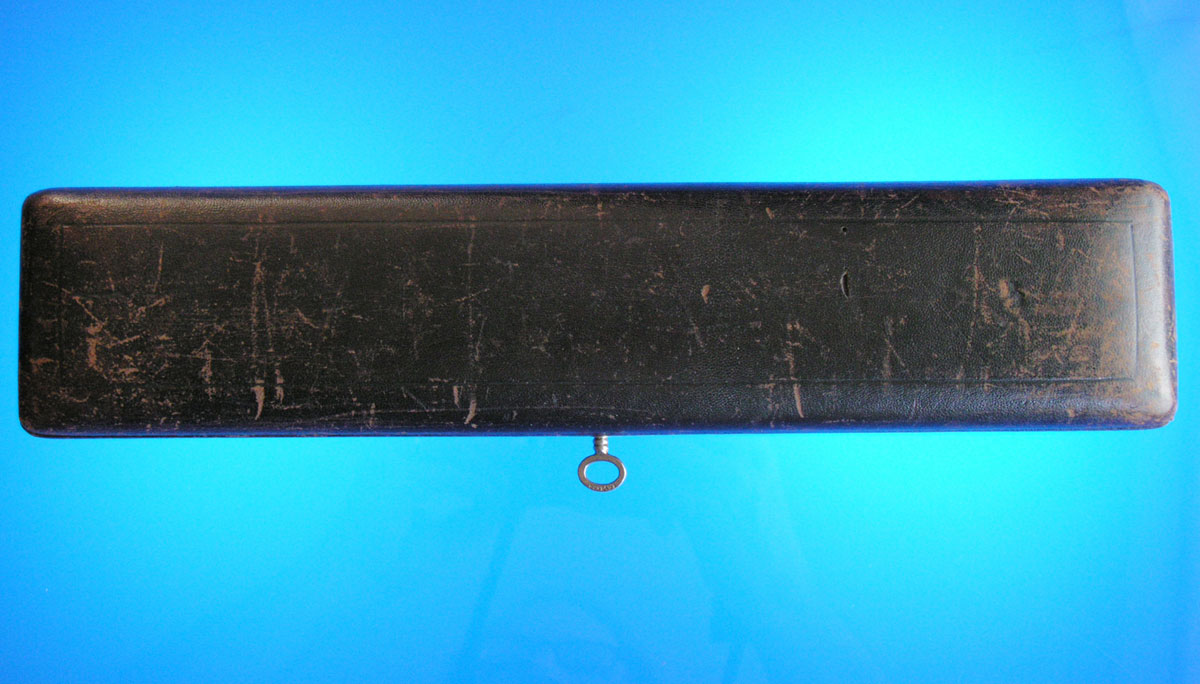 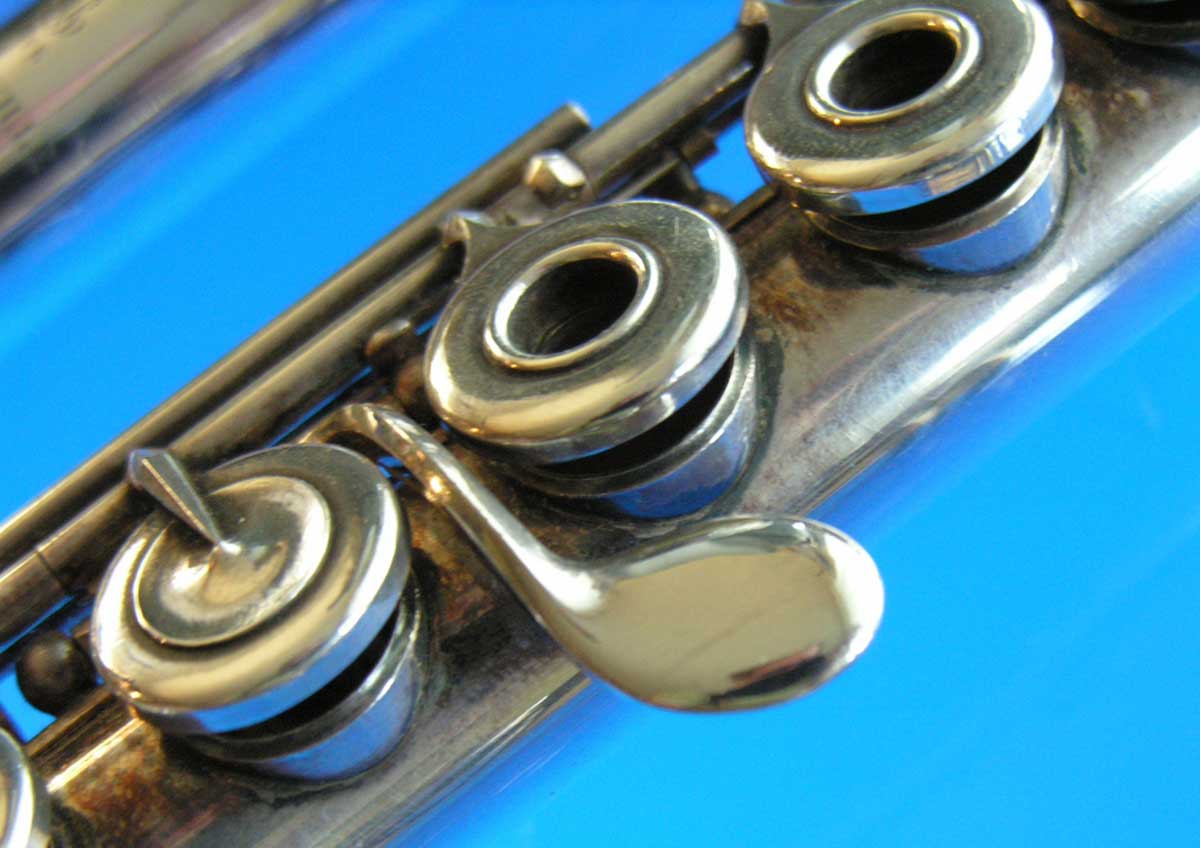