Marks: No marks visible under keys, on silver or wood.

Manufacture Date: Made c. 1853? Dating this flute is a pleasure and a challenge. The flute and the original Palisander case are in immaculate condition, almost as new. There is no serial number. The Godfroy workshop, including Godfroy's partner Louis Lot during the first six and a half years of the cylinder flute, changed their design little, once it had been finalized very early on. The first three years saw tremendous change, as the 1832 vaulted clutch system was transformed to the sleek, simple, and elegant mechanism familiar to flutists today. The earliest numbered Godfroy flute we have had the honor of midwifing is #113, a wooden flute with C foot. Godfroy 113 is already set up with the complete modern mechanism, although the G# has been converted from Dorus to the side G#. The thumb key is the completed Bb mechanism we call the Briccialdi Bb, apparently invented in 1849. Thus #113 must have been made after 1849. After #113, every flute was made with a very similar mechanism. Only a few changes occurred with which we can date these flutes. Three specific design elements appear to have developed over the years. These are the shape of the backclutch, the shape of the footjoint clutch for C#, and the shaping of the open holed keys, including the width of the "Y" arm attachment. The backclutch was originally made with broad "hips", whereby the three overlapping spades extend further on the sides than the span of the upper parts require. The broad hips were also used on Louis Lot's early flutes. Godfroy flutes 356 and 572 were built with smaller hips on the back clutch. This flute here has the broad hips. By the 500 series the open hole keys had been rounded considerably on the top. The footjoint clutch on silver flute #657 is clearly advanced, as are the "Y" arms and the backclutch. The current flute appears to have been built between #113 and #357, certainly before #572, so we give it an estimated date of c.1853.

Hallmarks: No hallmarks, although the keys are silver.

Comments: Early Godfroy cylinder flutes are the fruit of the partnership between Louis Lot and H. V. Godfroy, built between the patent of 1847 and the split of 1855. This instrument appears to have been built during this period. Our guess is that it falls between flute #113 and flute #572, both of which have passed through here. Godfroy #357 also appears to be later than this instrument, based on changes to the keywork. Thus we date this among the earliest of existing cylinder flutes, around 1853. To add to the great good fortune of this instrument's recent discovery (in southern France), the flute was built to play between the old French pitch of A=448 and the later "New Pitch" of A=435. Thus this instrument plays at A=440 with the headjoint pulled out just a few millimeters. It was probably pitched to play at around A=444.

Material: This gorgeous flute is made of beautifully figured wood, probably "Portuguese ebony" as mentioned in Louis Lot's record book for high quality flutes. The keywork and trim is of silver. The springs are blue steel. The pad washers are gilt. The corkscrew is, of course, a turned wooden system. The original wooden case is absolutely beautiful, and, like the flute, in perfect, as new condition.

System: This is the model 1 on the Godfroy price list, a wooden cylindrical flute with foot to C and silver keys. The G# is of the Dorus type. The trill key is to the thumb, giving what the French called a "C" trill. Extras include the fine wood and the expensive case.

Condition: This flute is among the best preserved of the 15 or so known Godfroy wooden cylinder flutes. The wood is perfect, the keywork is perfect, the pad washers are all perfect, even the case is in perfect condition. In fact, the fact that the case is so carefully preserved shows why the flute itself is in such good condition. The instrument has seen some use, but not substantial use. The gold in the name stamps, for example, is still clearly visible but nonetheless partly gone from wiping the instrument down. The embouchure is perfect. This instrument has been recently overhauled in France, for professional use at A=442. 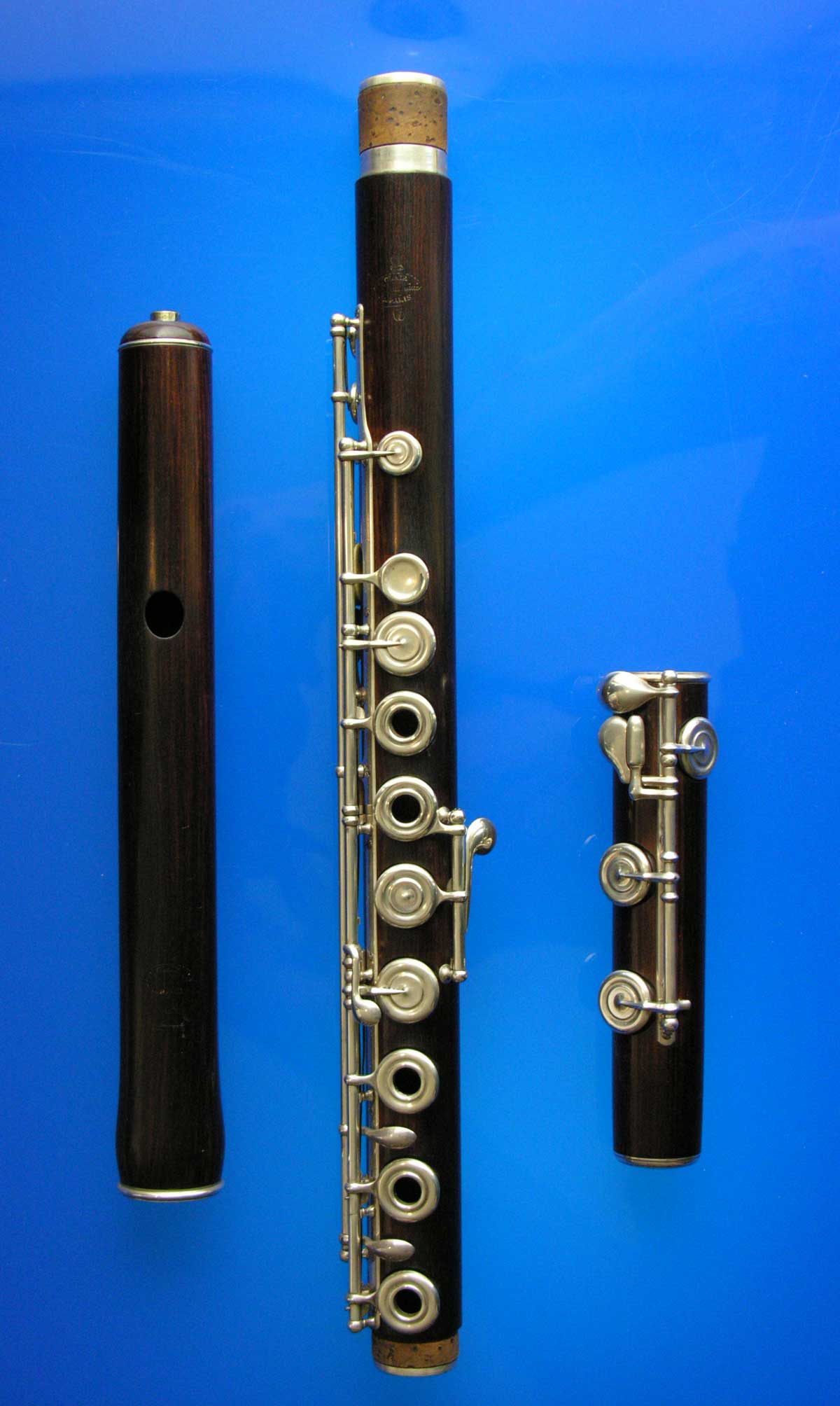 Portions of the original gold fill are still seen in the Godfroy stamp on this rare and very beautiful flute. 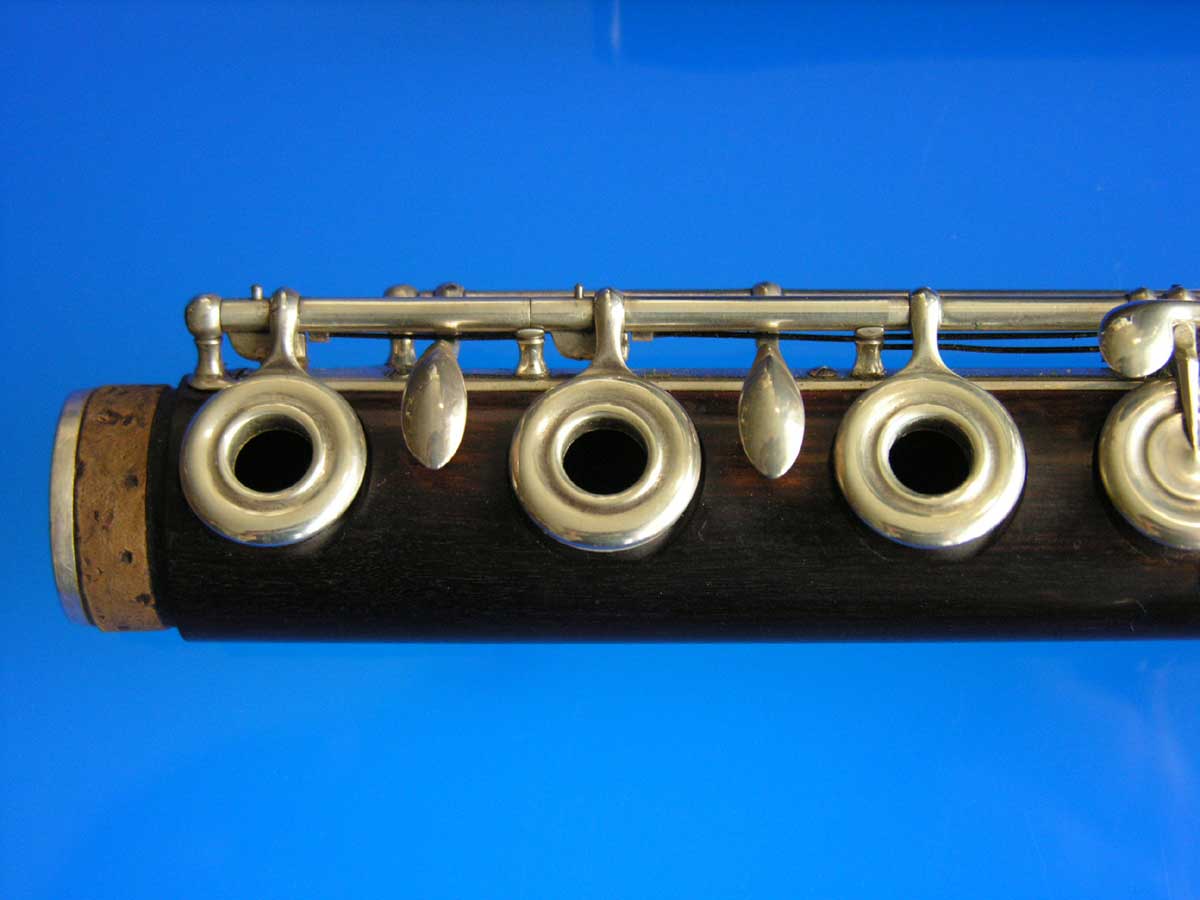 The absolute genius of Godfroy and Lot are seen in the right hand mechanism, here on one of the earliest cylinder flutes. The difficult task of controlling the Bb key with the right hand was solved via the shoulder clutches seen here. 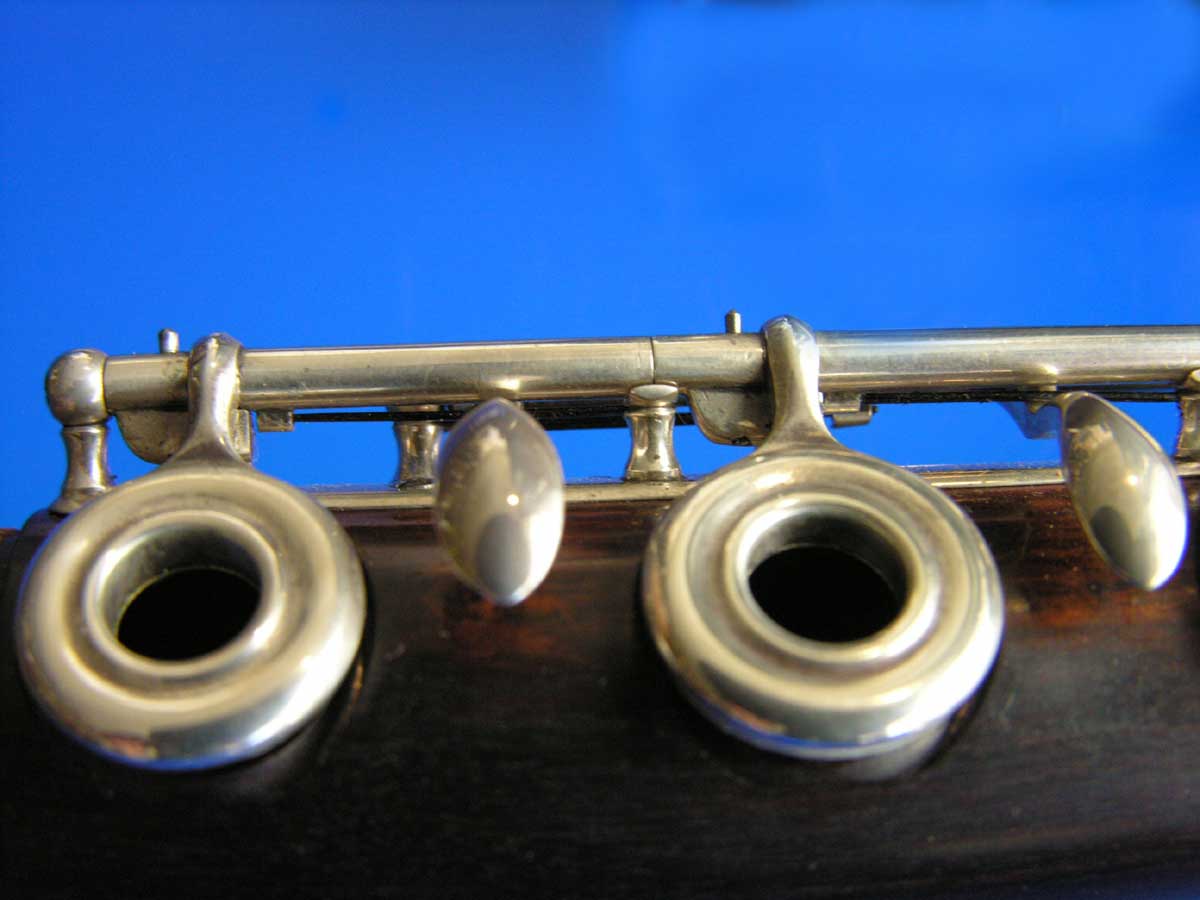 This close up shows the beautiful pillar used as a spring holder and support, and the distinctive design of the rim at the open holes. Godfroy flutes by the 500 series had a much more curved top to the keys. 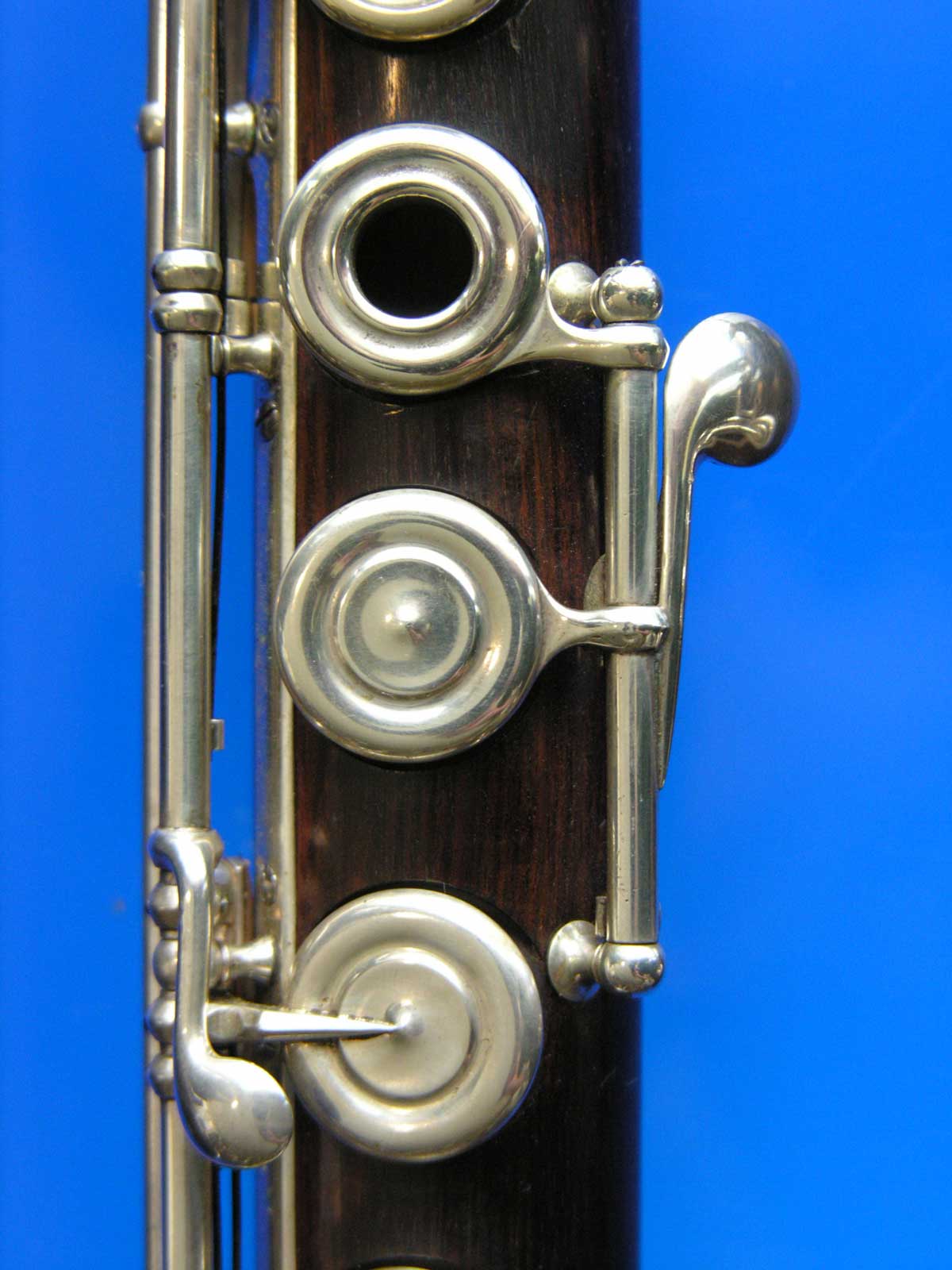 The glorious Dorus G#, with the early key design of Godfroy and Lot, here seen in perfect original condition.

The lovely and perfect wooden case was a special order, and has been preserved without a blemish. 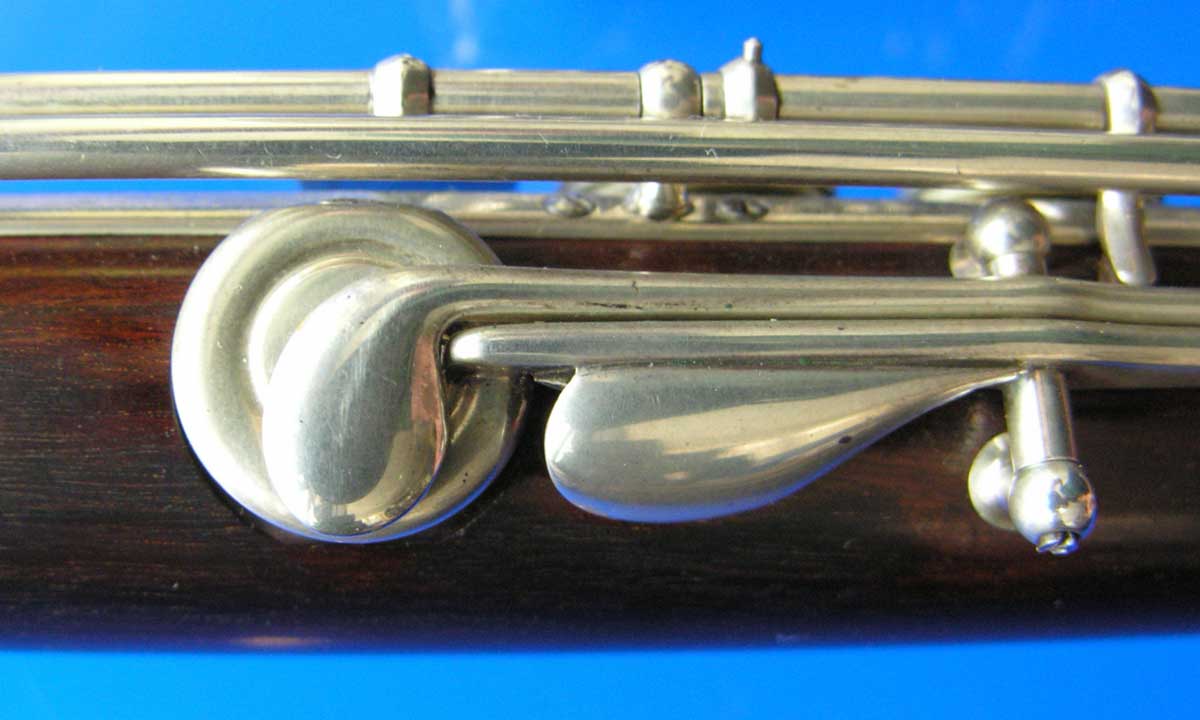 Very few flutes exist with a Briccialdi Bb earlier than this one. The teardrop touch is just a tad thinner than later Godfroy touches. 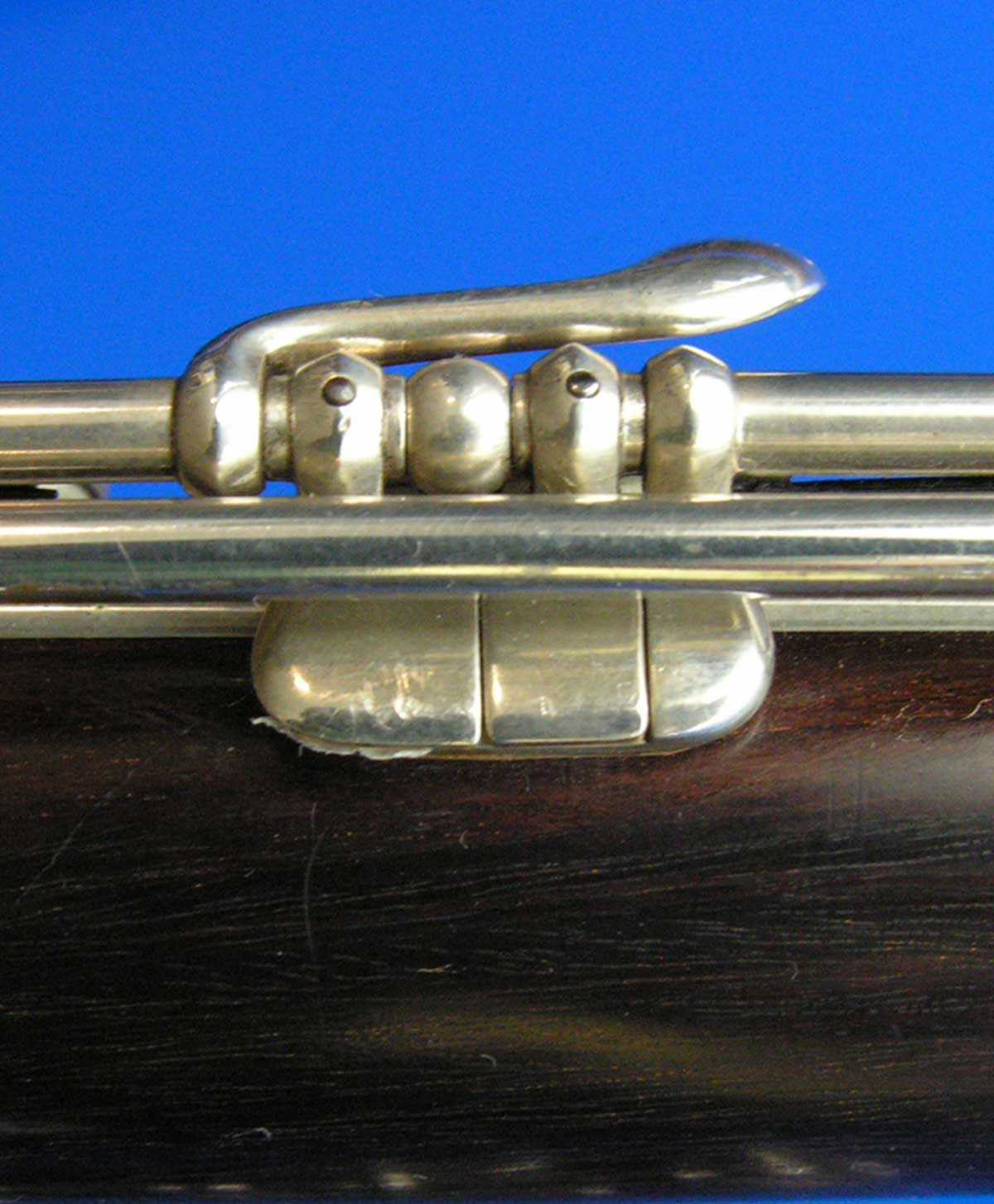 The back clutch is of the wide hip variety, as seen on Louis Lot's early flutes, and Godfroy before #356. Godfroy's continued output favored the more streamlined "narrow hip" clutches. 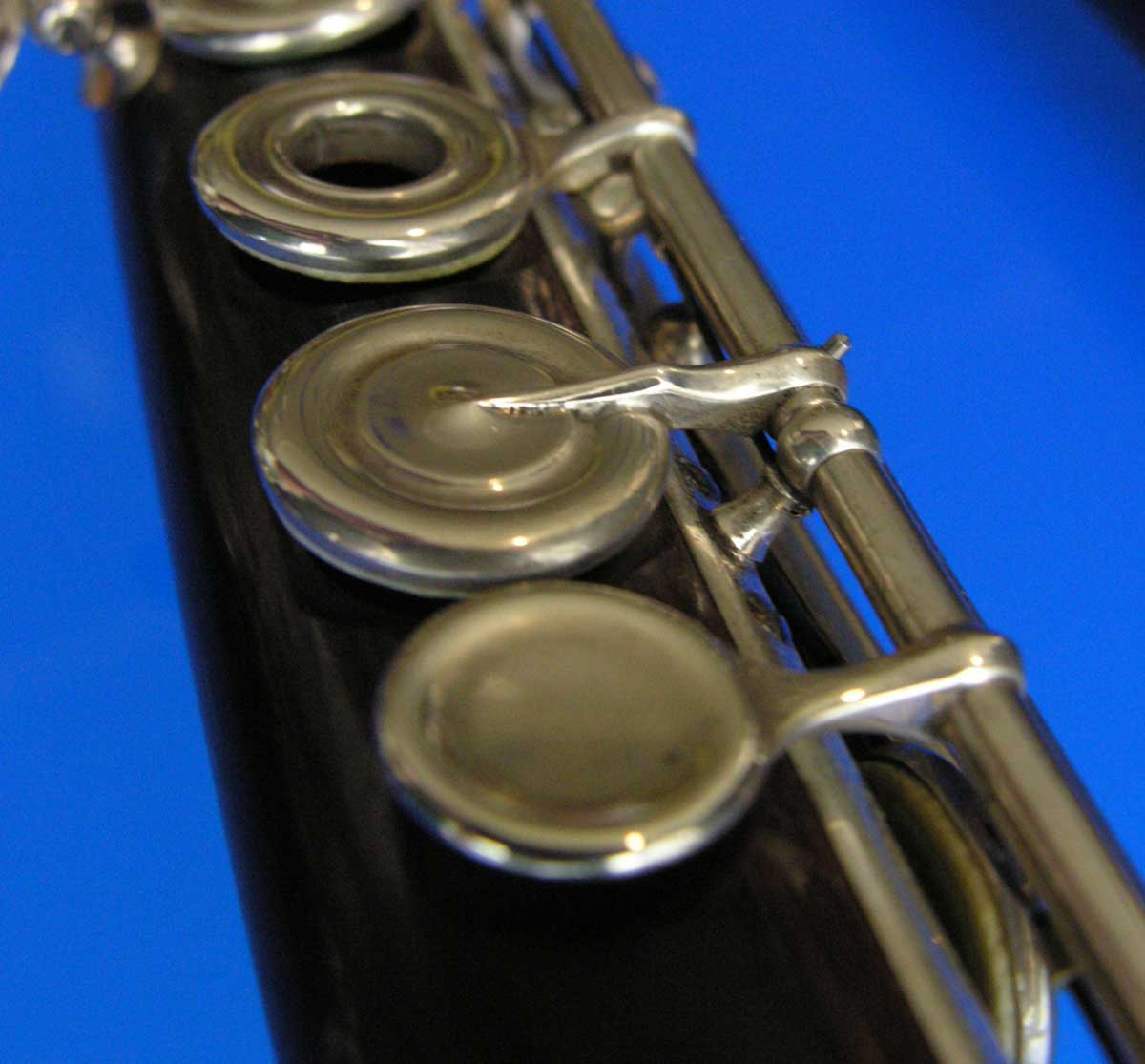 It seems remarkable that the design of the modern flute was complete so very early by Godfroy and Lot. There is very little different from the keywork on this flute and an instrument of today.

The rear of the footjoint shows us the clutch at the C#. This early design uses a much wider tube for C#, making the clutch plate very long. The edges are fairly square. Godfroy and Lot changed this design to a rounded and shorter clutch plate, although precisely when is difficult to determine. 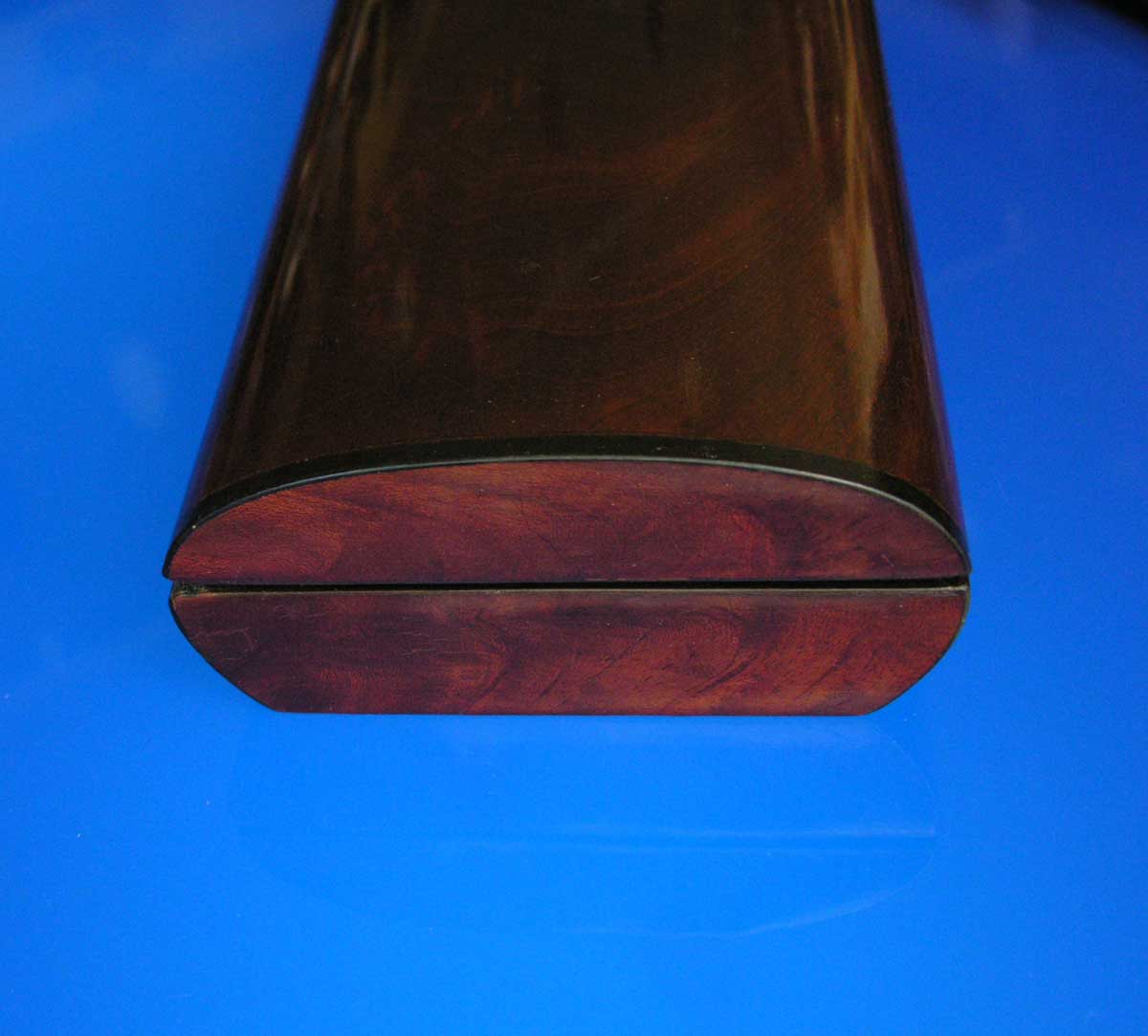 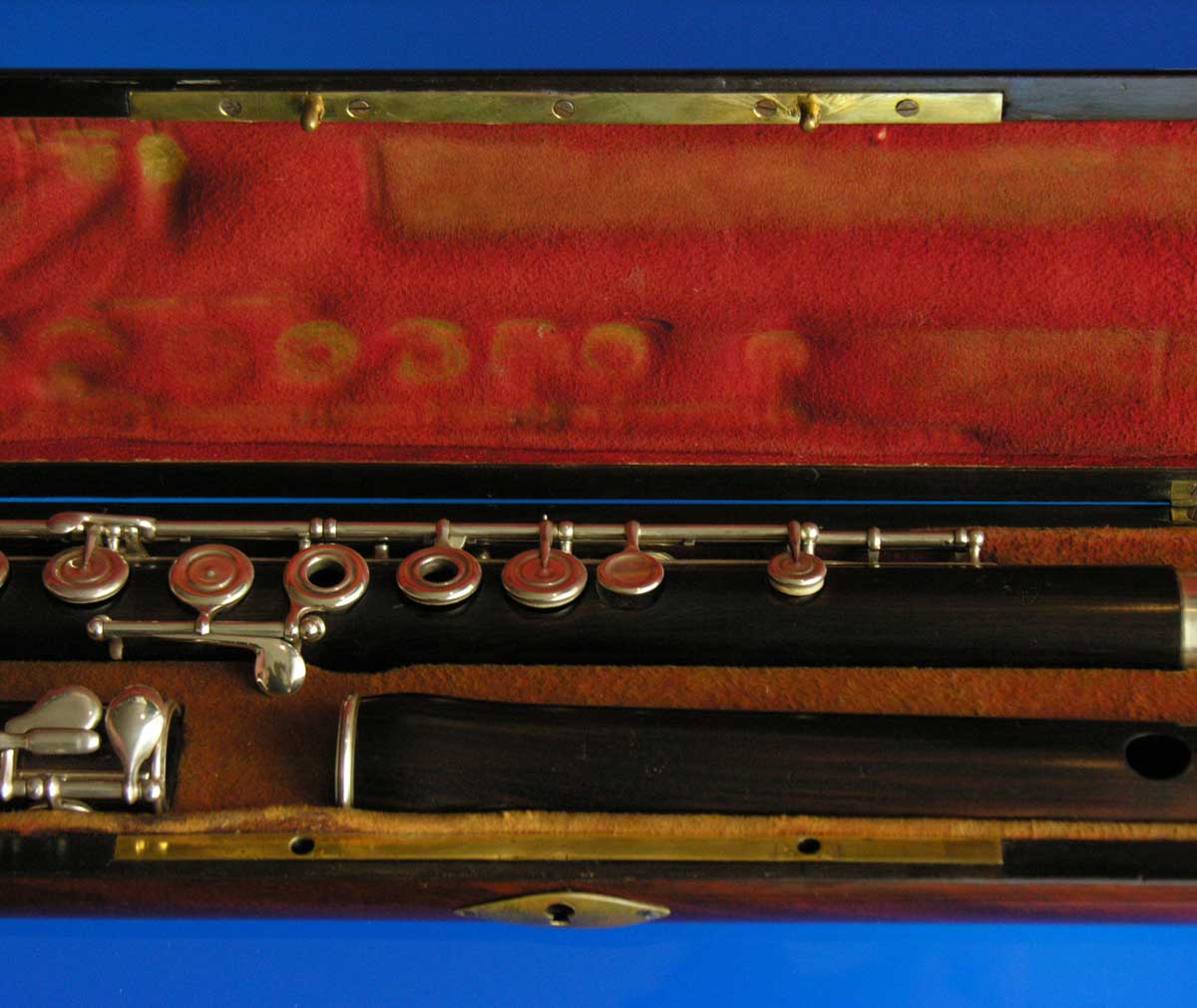 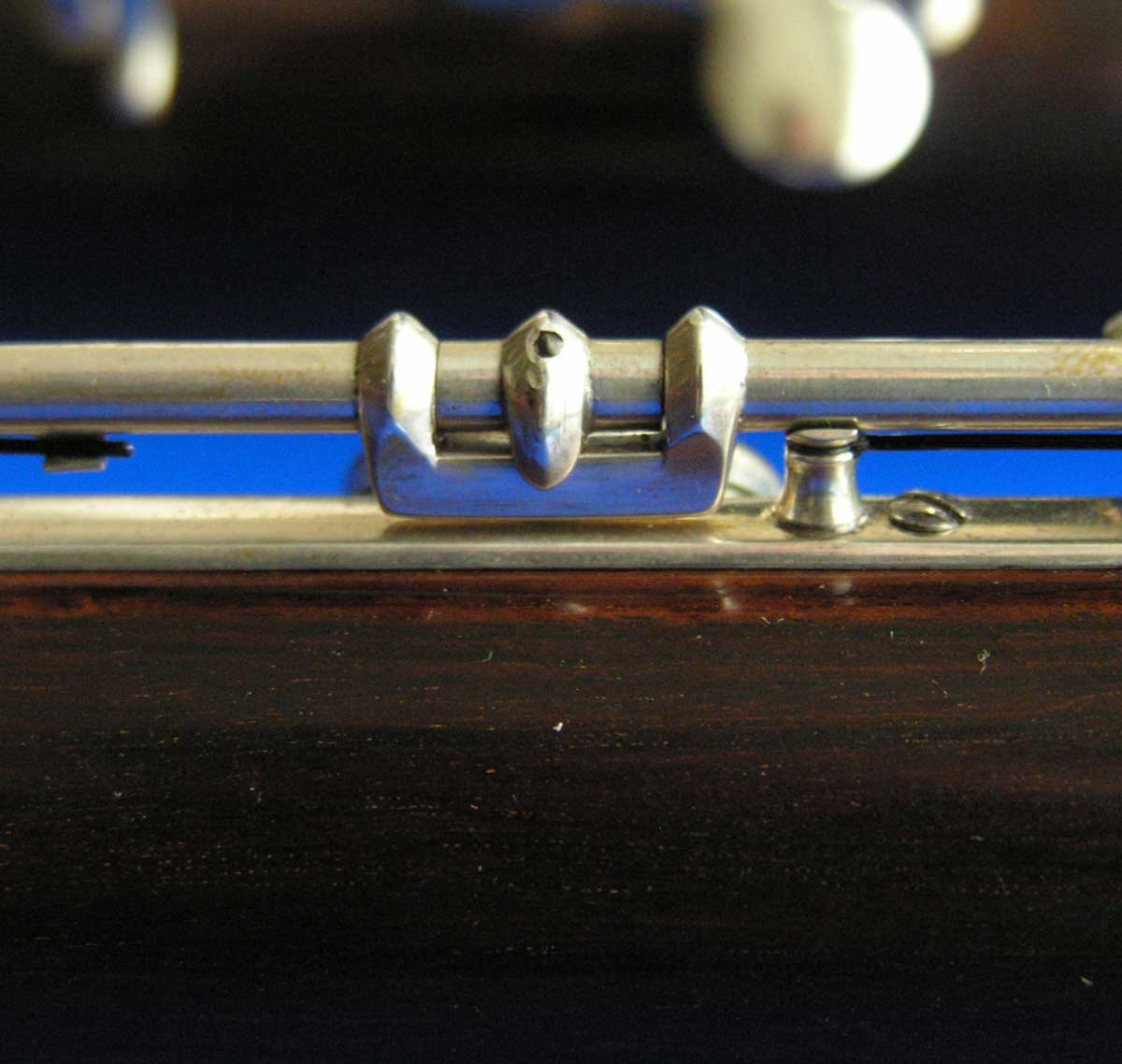 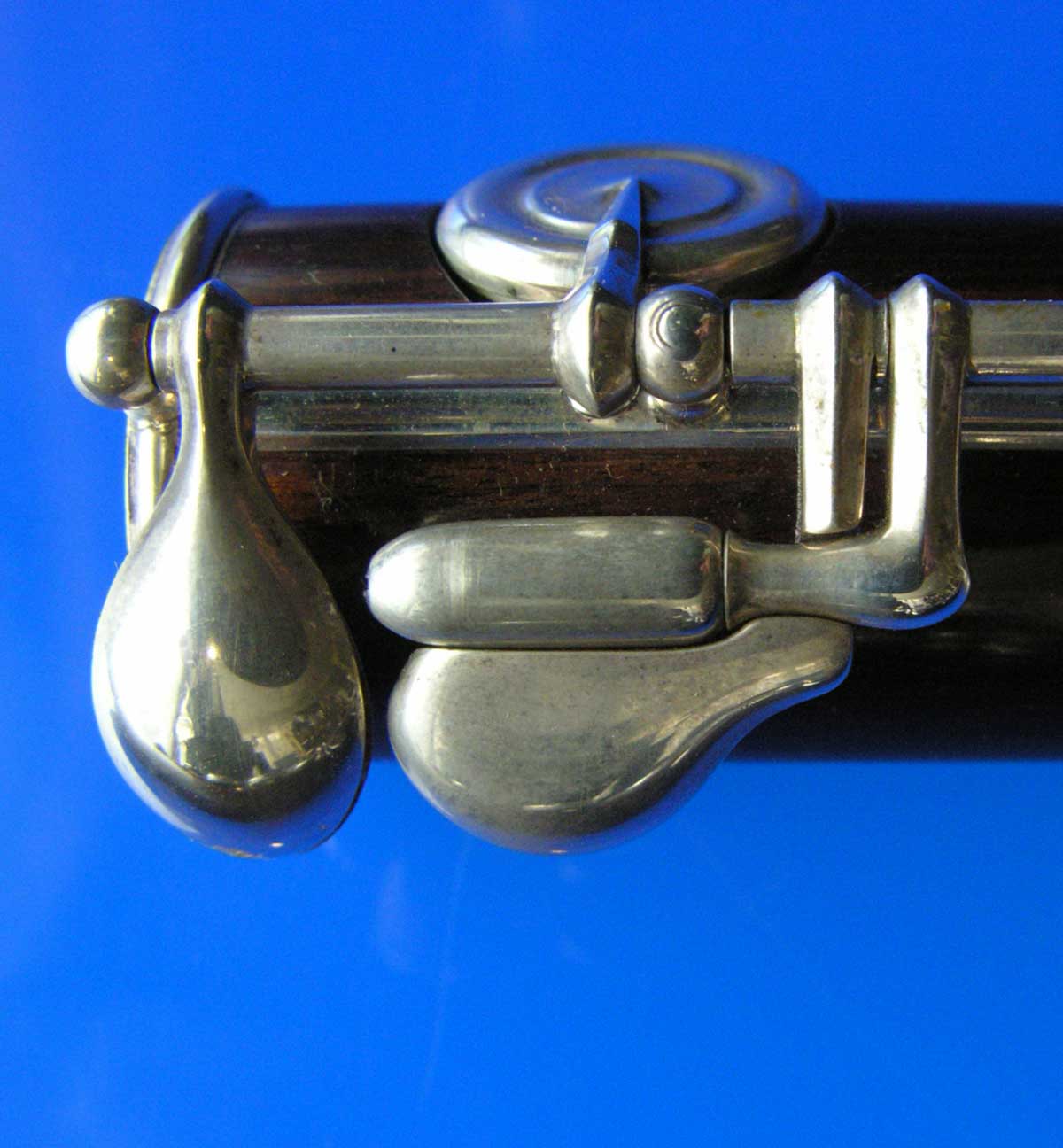 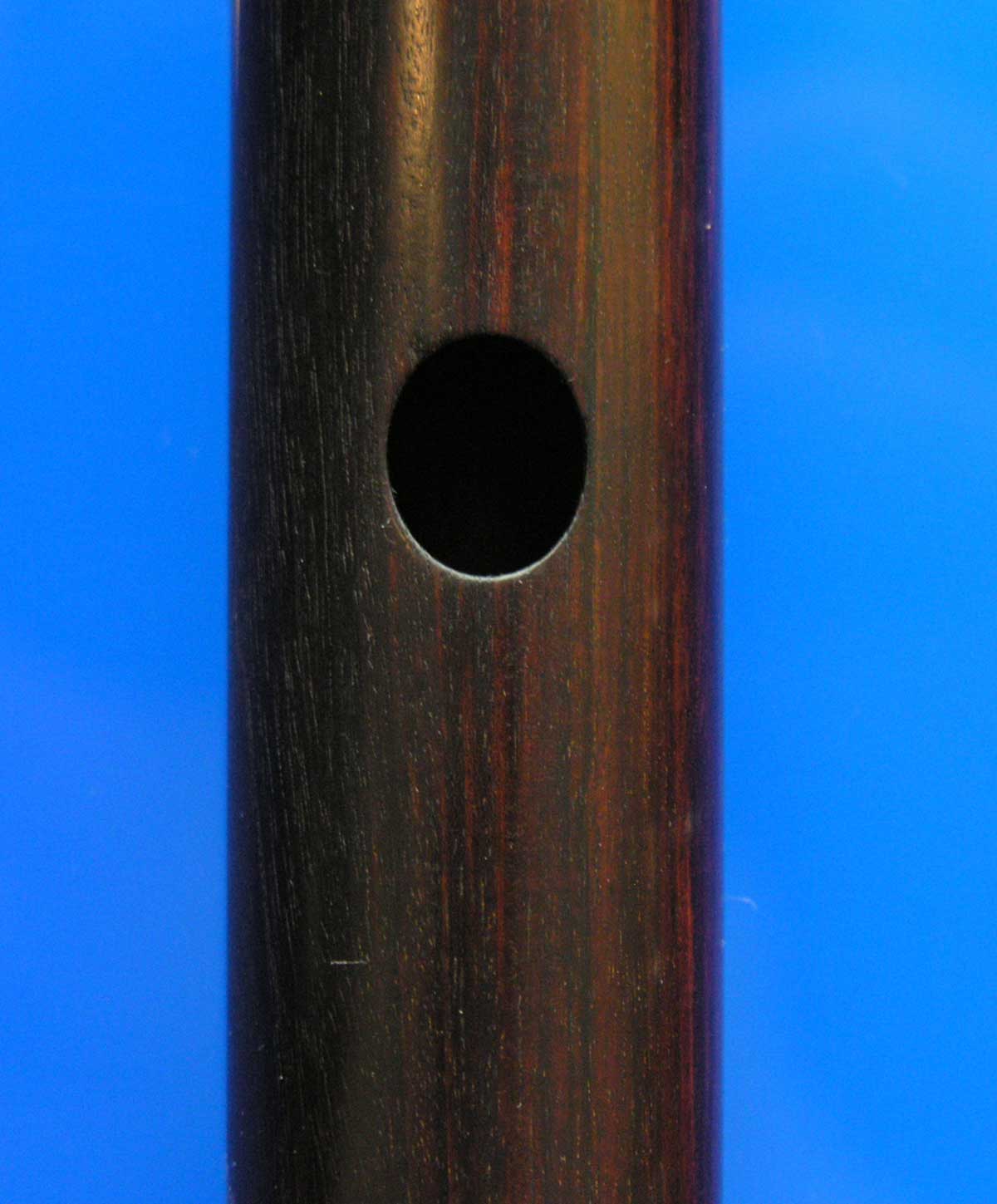 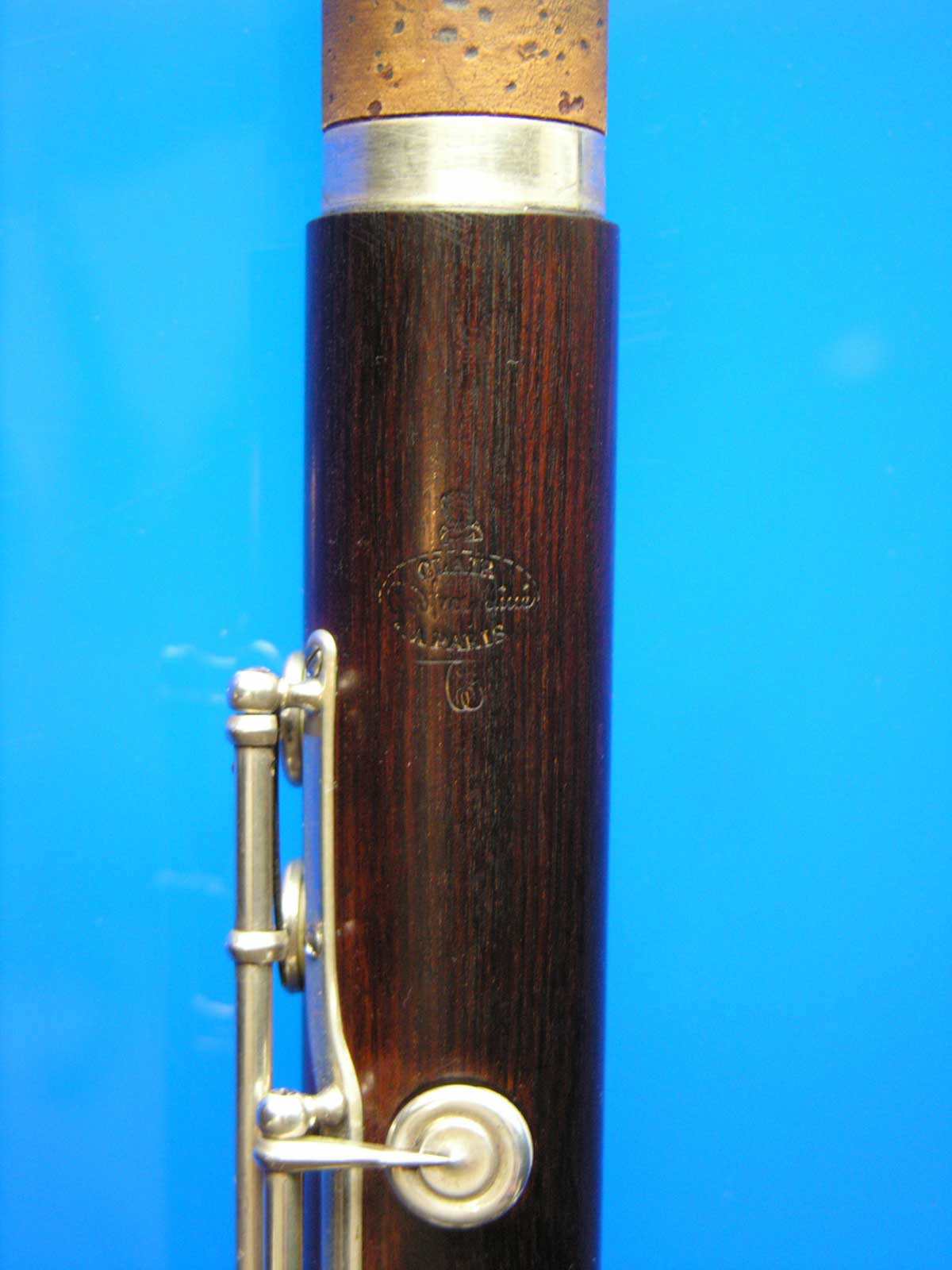 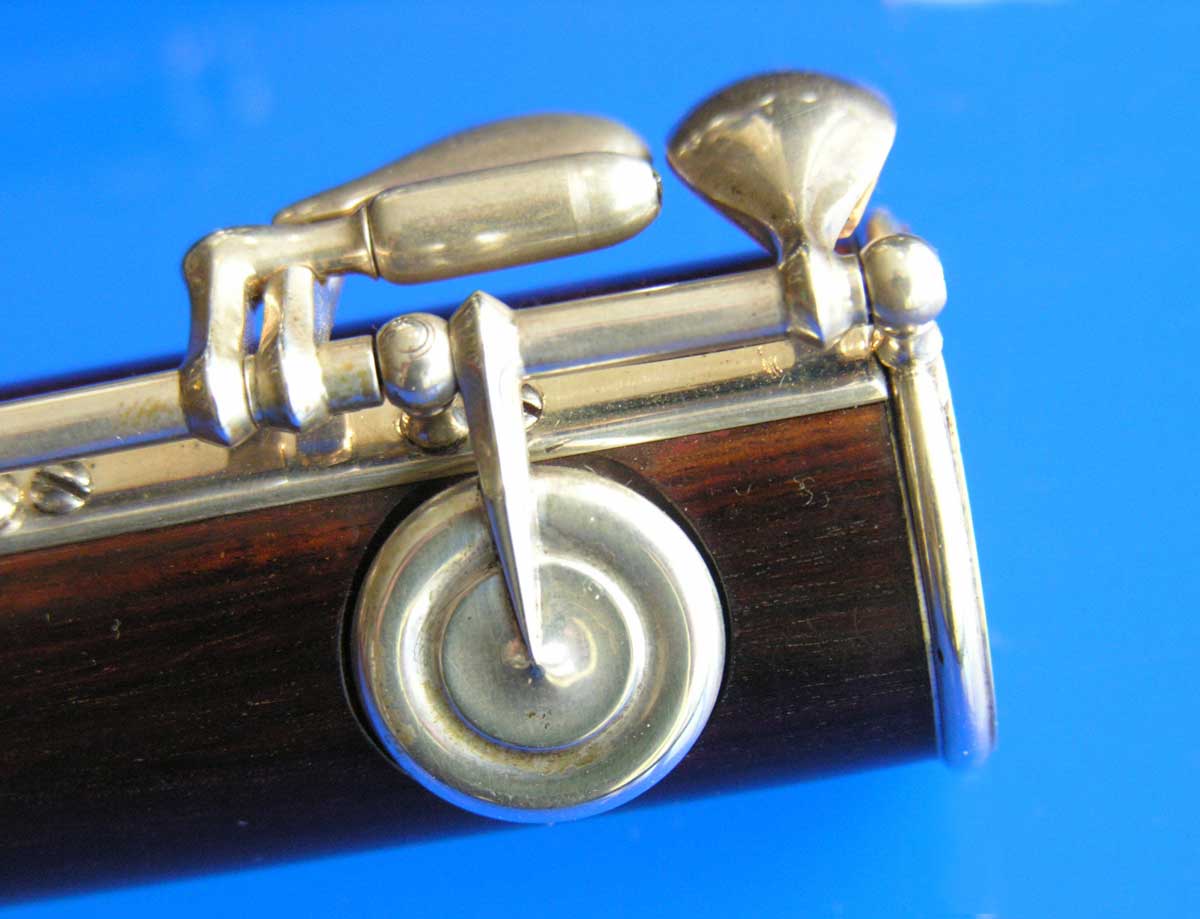 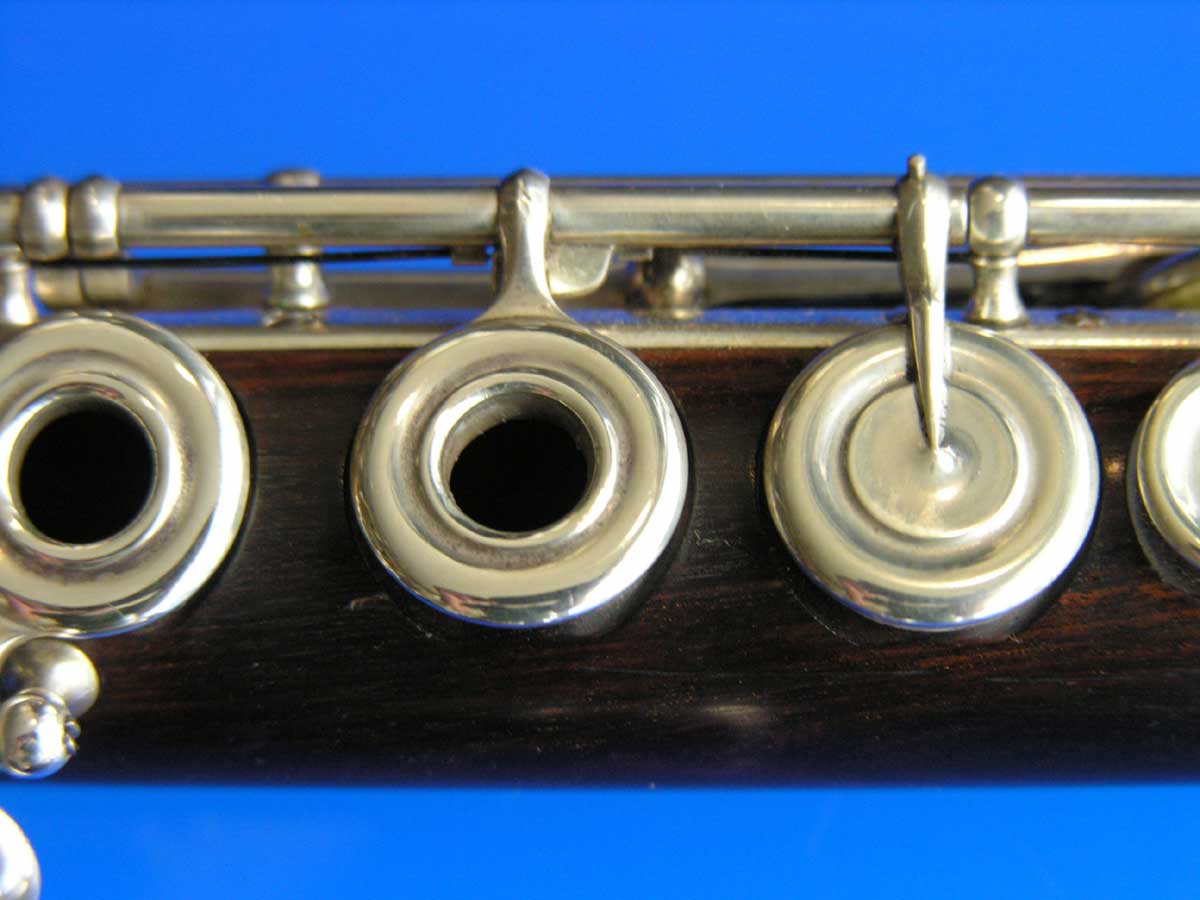 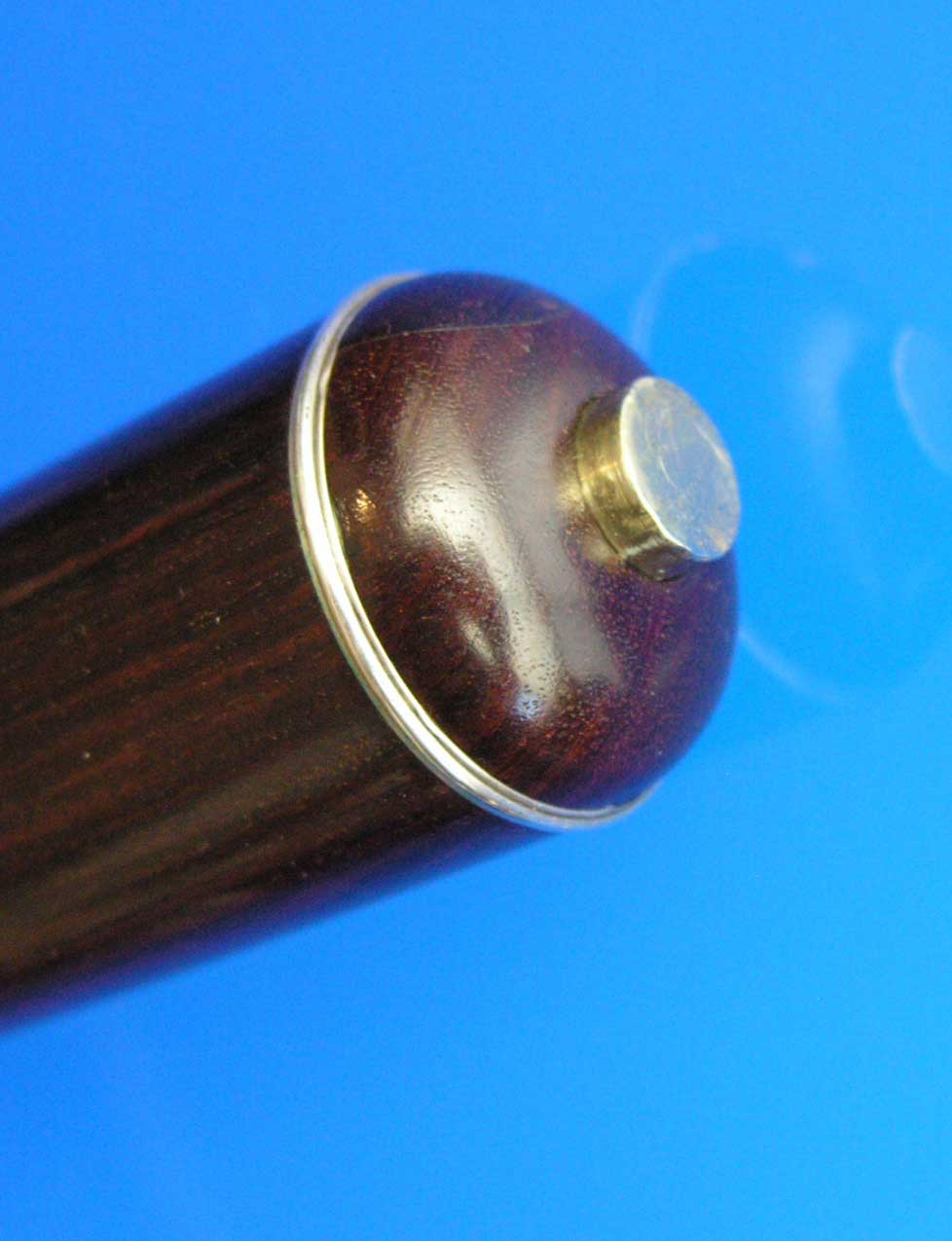 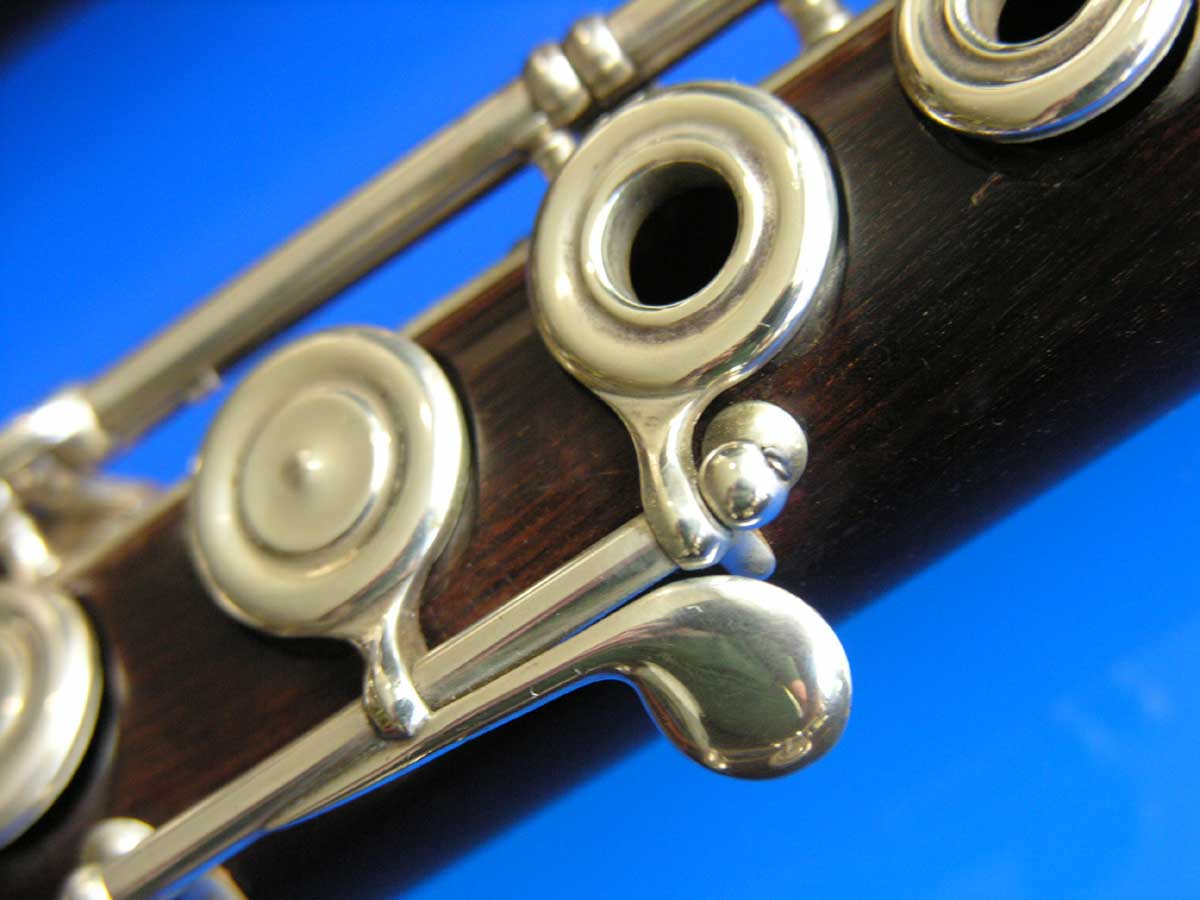