Manufacture Date: Made in 1985 as a special order for Sid Zeitlin.

Comments: The late Ewen McDougall is one of the best known of the generation of British flutemakers with a connection to Rudall Carte. McDougall related his history several times. Here is a short summary, in his own words (from Leanne Harper's interviews, on www.topwind.com): "STARTED: I went straight from school to Rudall Carte in 1950. 2. TRAINING: I began a five year apprenticeship with RC, at that time it was the only place in the U.K. where one could find such an opportunity. I worked there (less three years in an army band) until 1961. At that time I joined Flutemakers Guild, remaining there until 1983. Since then I have been working independently." McDougall's flutes are described at www.toucansurf.com: "His flutes are artistically crafted in Sterling Silver or Gold and exhibit the following features :- Soldered saddles. Forged Keywork. Hard drawn tube. Stainless steel rods, screws and springs. Left hand, right hand and trill rods mounted on conical point screws. Burnished polish finish. Double skin covered felt pads. Leather covered case with velvet lining. Complete instrument bears British Hallmark . The technical details ensure a fine playing response and even scale . Castings are not used anywhere in the construction. Forgings give greater strength and a fine finish . Such a musical instrument will give delight and satisfaction for a lifetime." Sadly, Ewen McDougall passed away on November 2, 1999.

System: This flute is built in the full Boehm/Lot system, with the additions of a C# trill key, a Bb shake, and a wonderful half-shutting of the Bb key for venting high C and G#, as well as a specially placed gizmo for shutting the low B key. This instrument is the brainchild of the late Sid Zeitlin, the well known flautist from Minneapolis. Sid wanted a flute with the 22 carat sound he first experienced on Dayton C. Miller's famous gold flute now in the Library of Congress. Sid has always been an admirer of Louis Lot, yet appreciated the fine art of handflutemaking that had never died in England. He went to Ewen McDougall, one of the flutemakers at Carte's when it closed, and thus in touch with the traditions of old. Sid ordered an instrument of the most exquisite materials and design. The keys are all hand made without castings, and the extensive engraving (inspired by a Rudall Carte flute) is all hand tooled (by a retired English engraver of the old school, as the story goes). The flute is English, French and American in inspiration, and stands as a monument to this art form, and to its late, great maker, Ewen McDougall, who sadly passed away on November 2, 1999. Pitched at A=442 (McDougall/Boehm scale). The Gizmo key on this flute is of interest. John Rayworth gives this story: "You may be interested in the history of this gizmo key. I related this to Alton McCanless (who copied a McDougall flute) and who now calls it after the inventor - the Hector Miller Gizmo :- Years ago, when Ewen McDougall worked for the Flute Makers guild they got a guild flute in for overhaul and to their surprise they spotted this gizmo arrangement on it. It had not left their workshop like that. It belonged to a Hector Miller, of Camden Town, Sussex, UK who is an amateur flute player and a silversmith of national (UK) repute. He makes jewelry for the UK Royal family and all sorts of people. Being a silversmith of such quality he had the means and ability to do this modification to his Guild Flute. The Guild thought it was marvelous and it was adopted by Ewen and some other Guild members as a standard method. So, it was first invented and fitted by an amateur player as a modification to a British Flute Makers Guild flute."

Condition: The flute is in excellent, near mint condition. 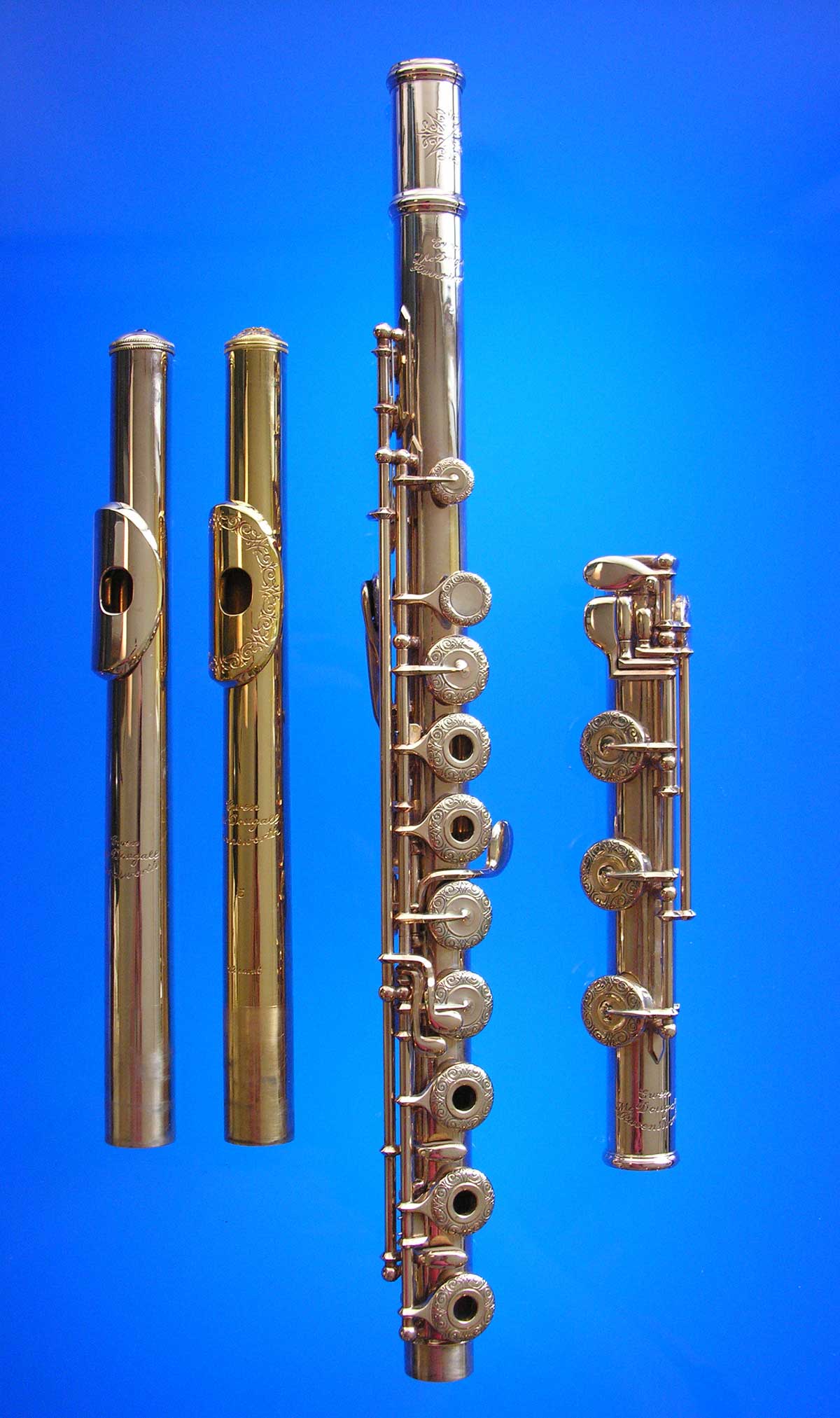 The color of the 22 carat gold headjoint on the right is darker and richer than the 9 carat joint on the left. 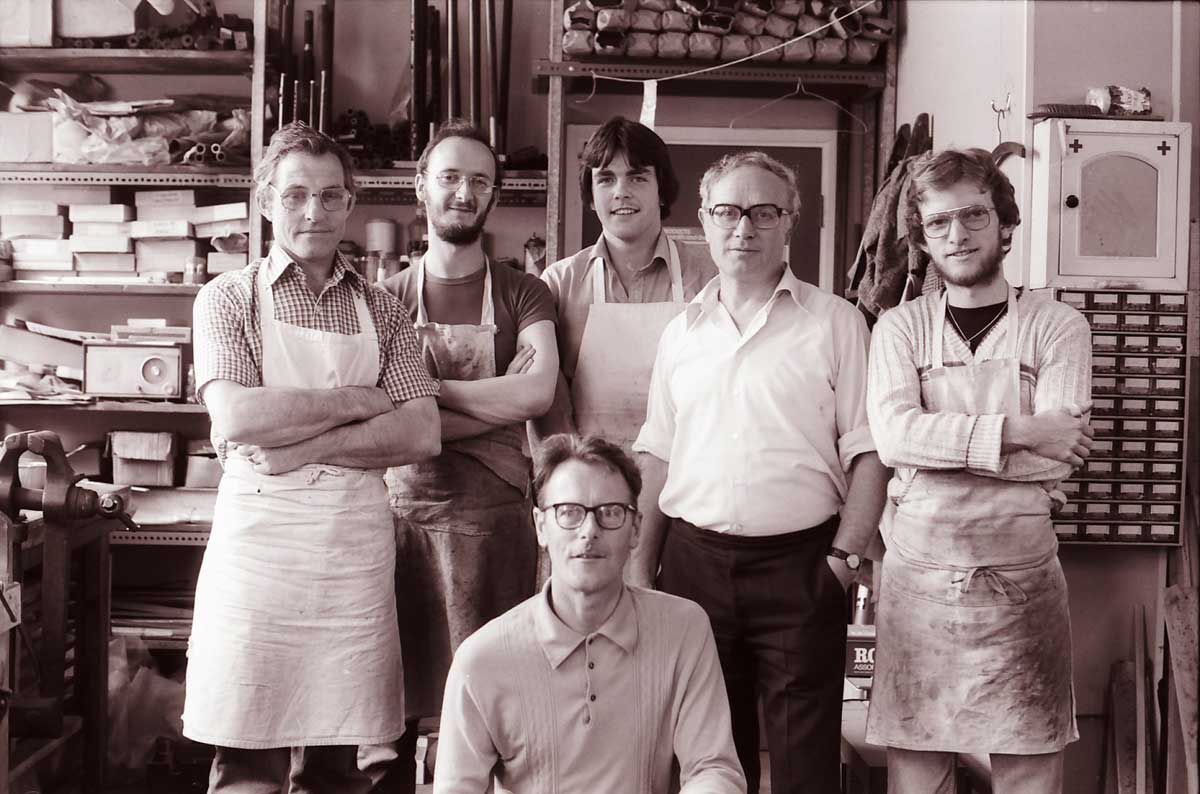 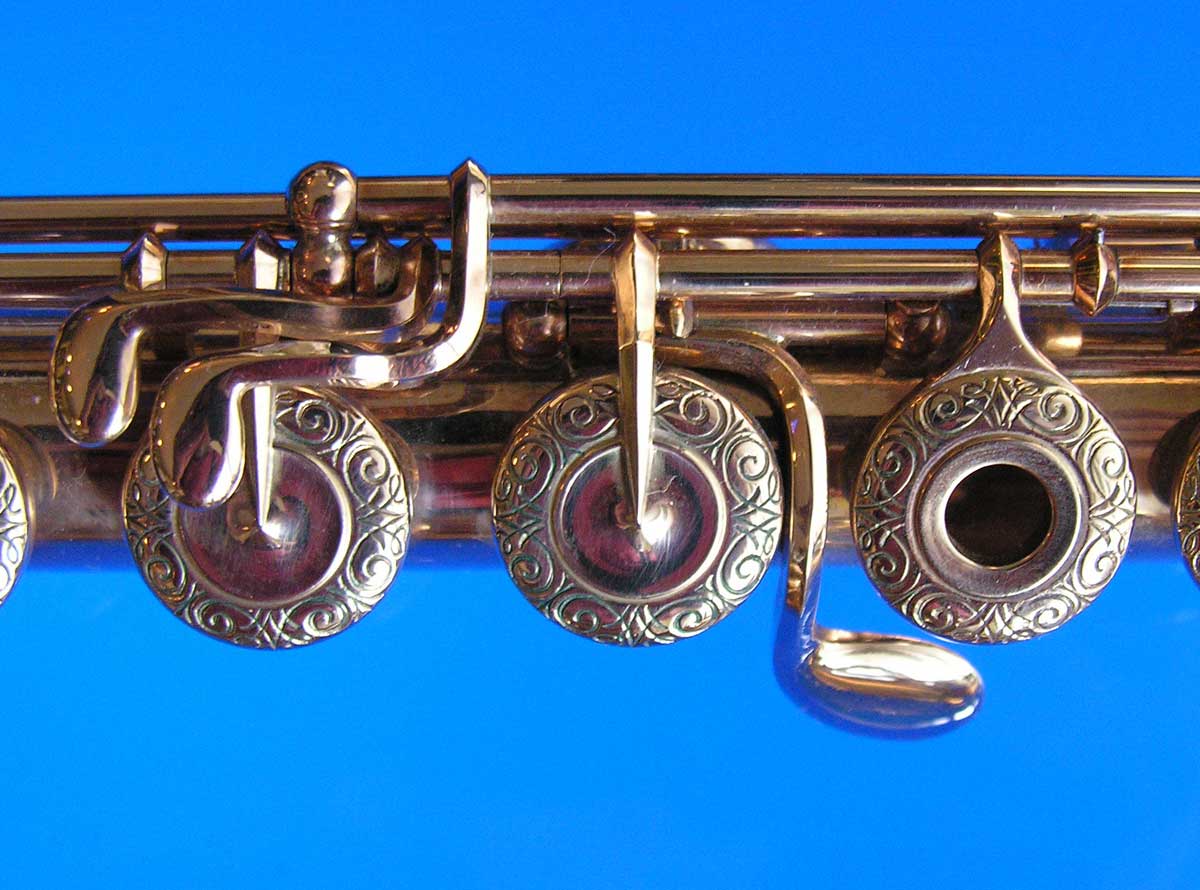 The G# area, with the extra trill key for C#. Every piece of this flute is hand carved uniquely for this instrument. 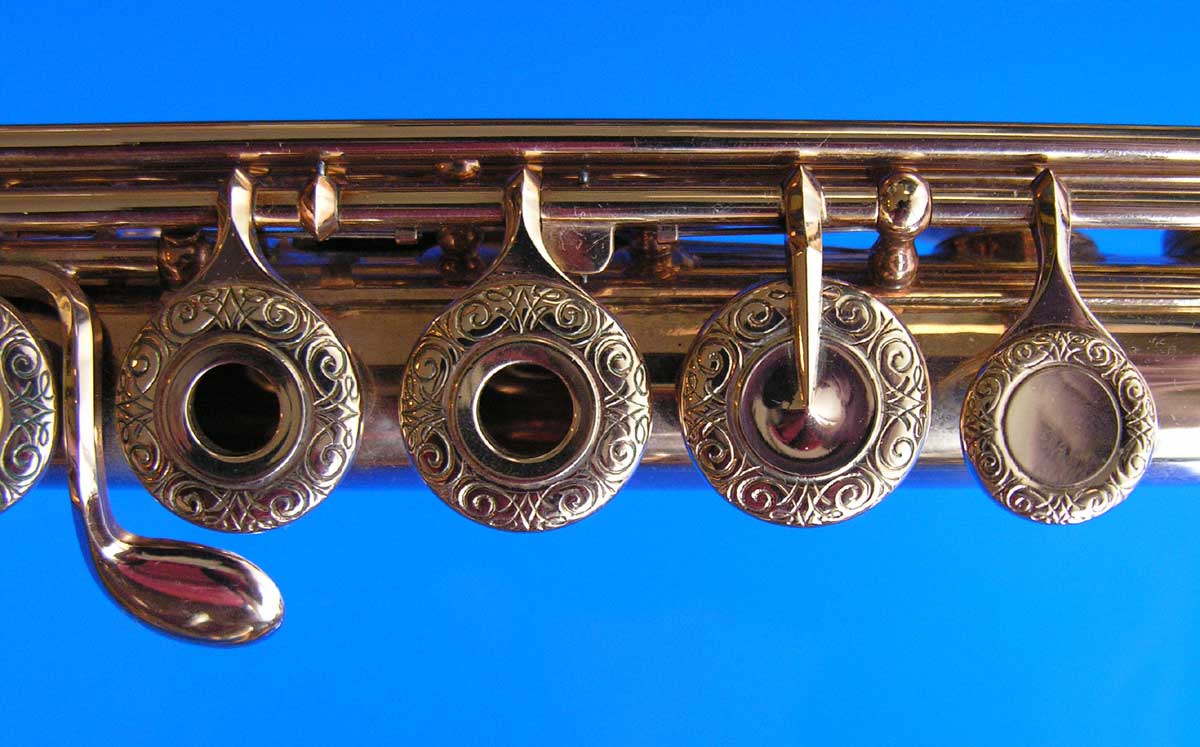 The left-hand mechanism with Lot's shoulder clutch for Bb.

This photo of the lovely backside of Ewen's flute shows the lever to the thumb key for half-closing the thumb to assist the high G#. 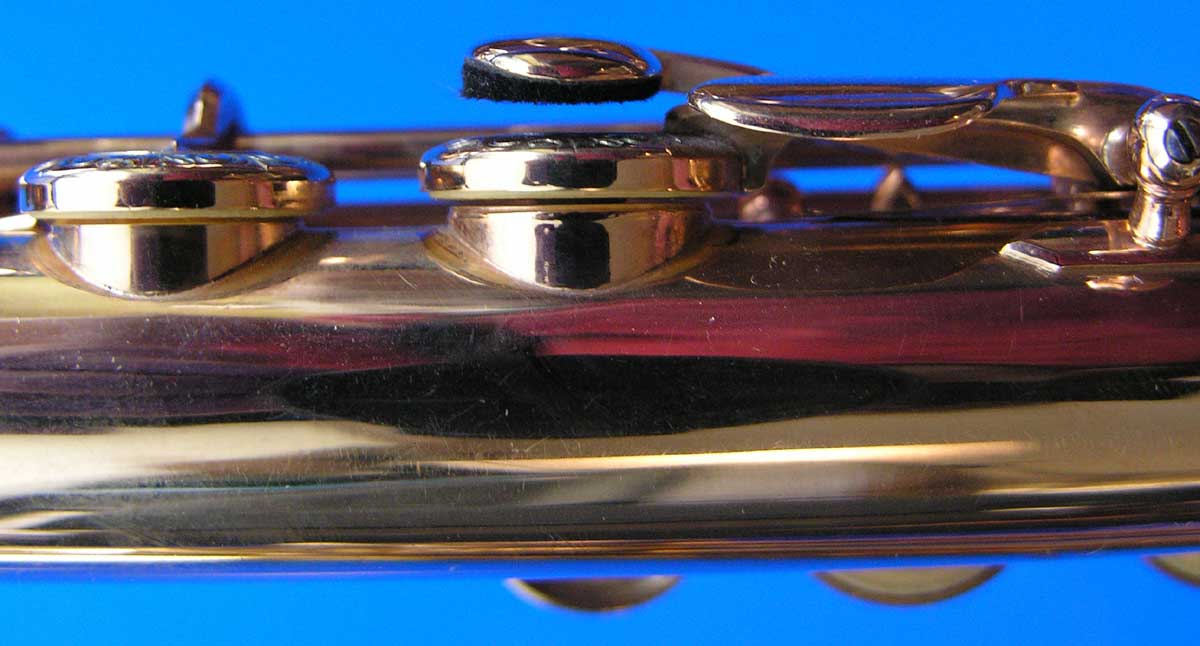 Here is the thumb key at half-mast, activated by opening the G#.

The McDougall foot, with the unique "gizmo" key. The Gizmo key was invented by British silversmith-flutist Hector Miller, who first used it on a Flutemaker's Guild flute. 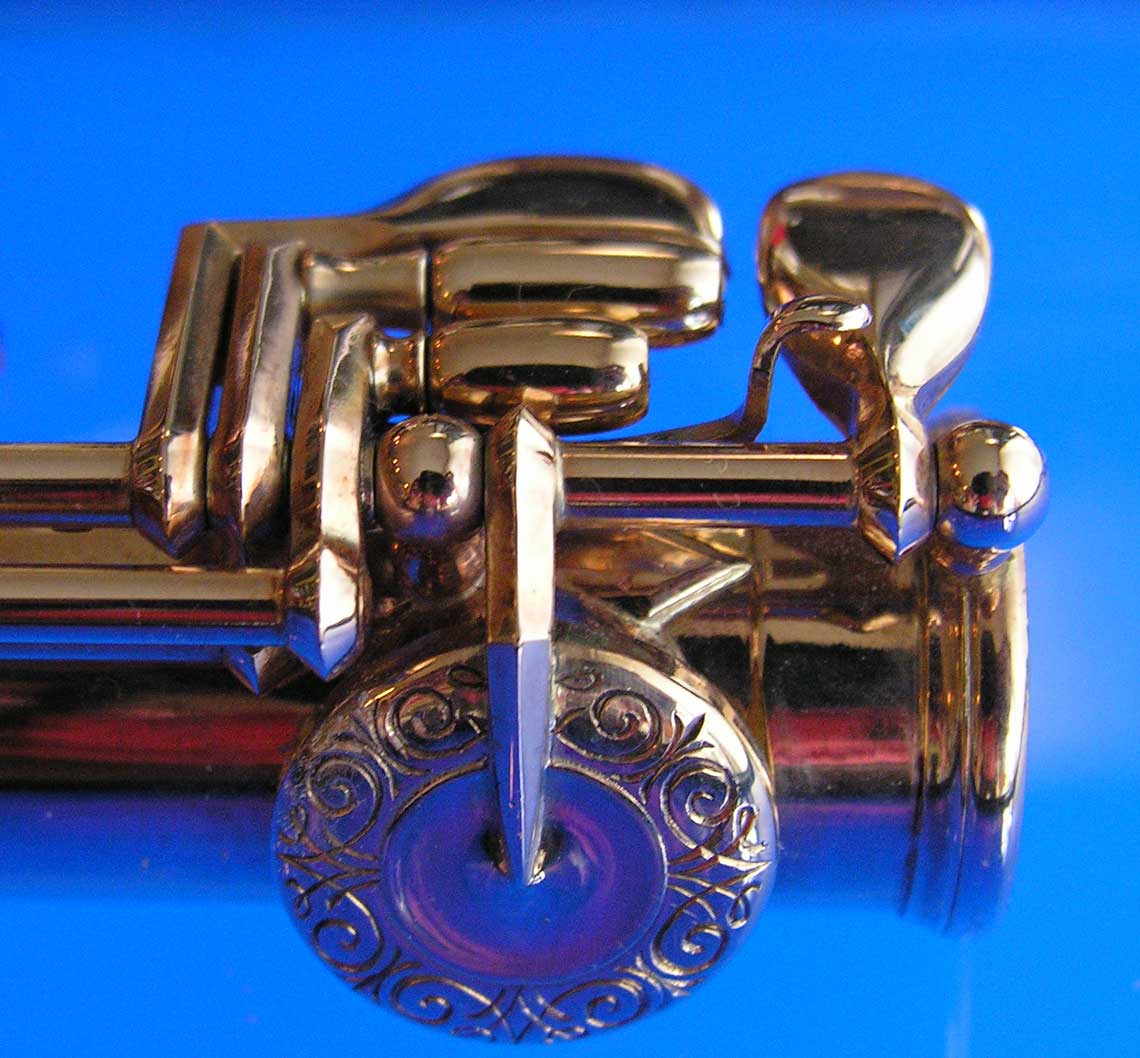 Here we see the gizmo key like a cobra head peeking over the D# touch. 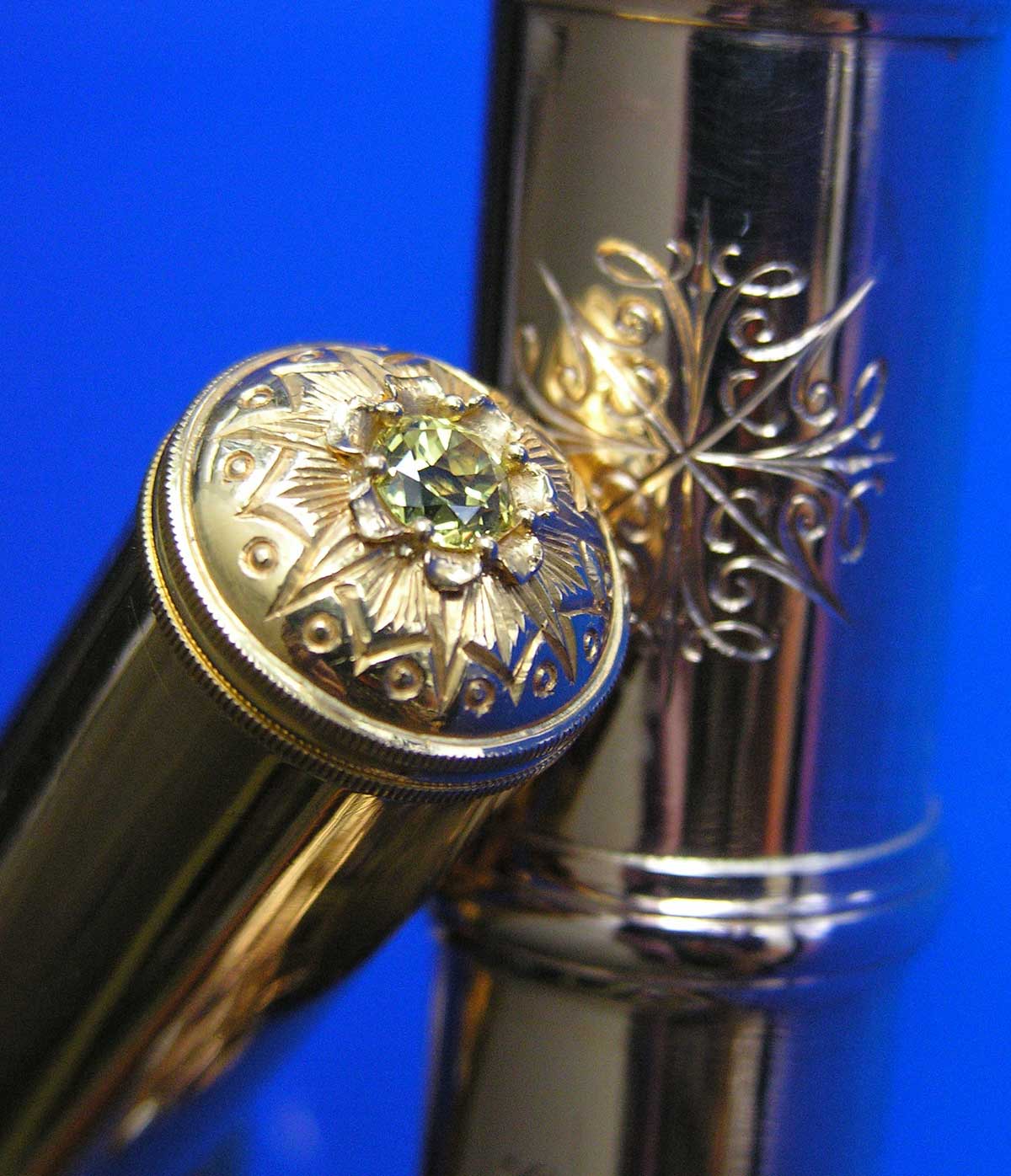 The 22 carat headjoint is fitted with a gold sapphire set into a floral crown. The 9 carat head is set with a blue sapphire.

All of the engraving on this instrument was done by a legendary old-school English engraver, according to legend. 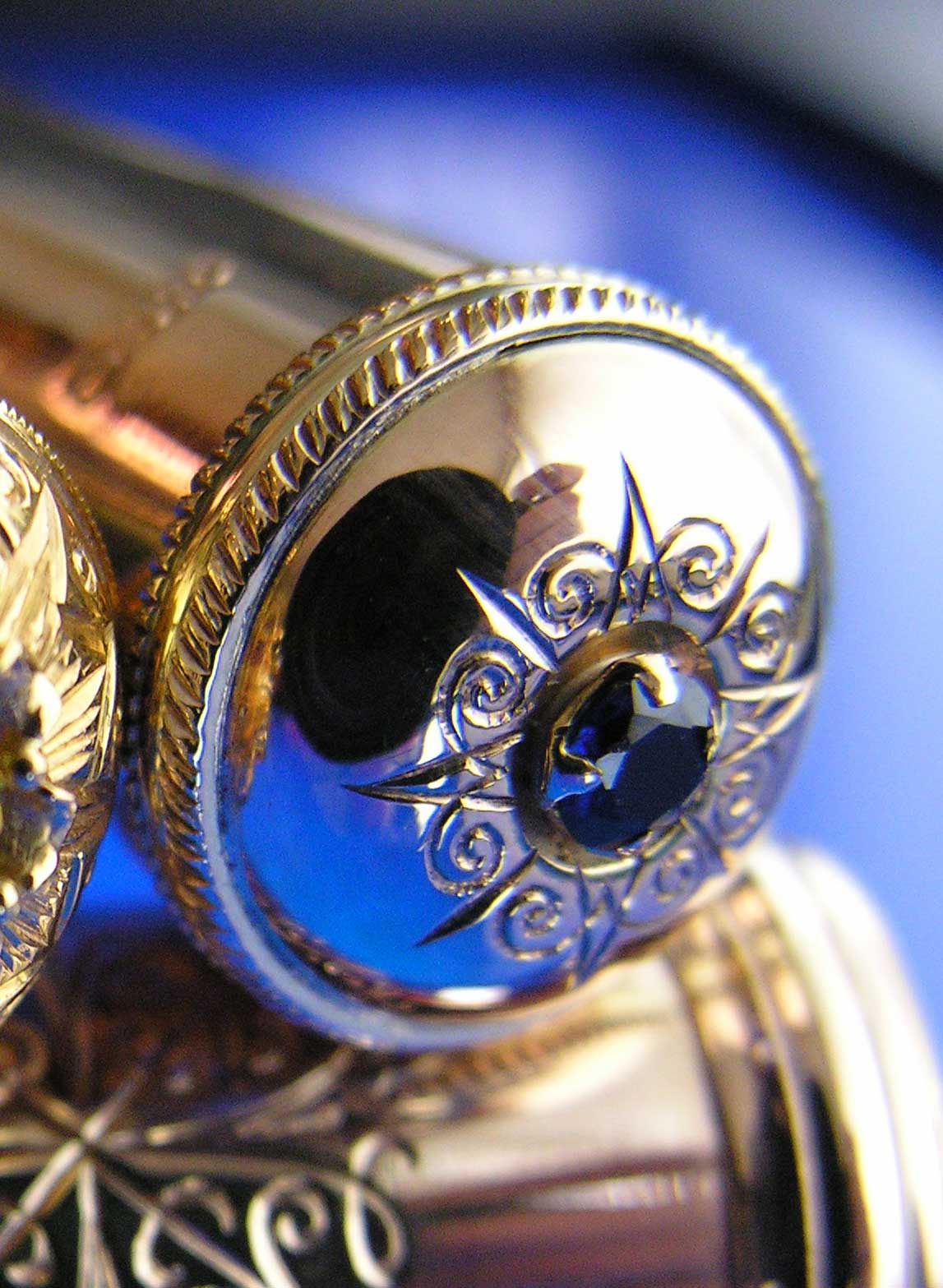 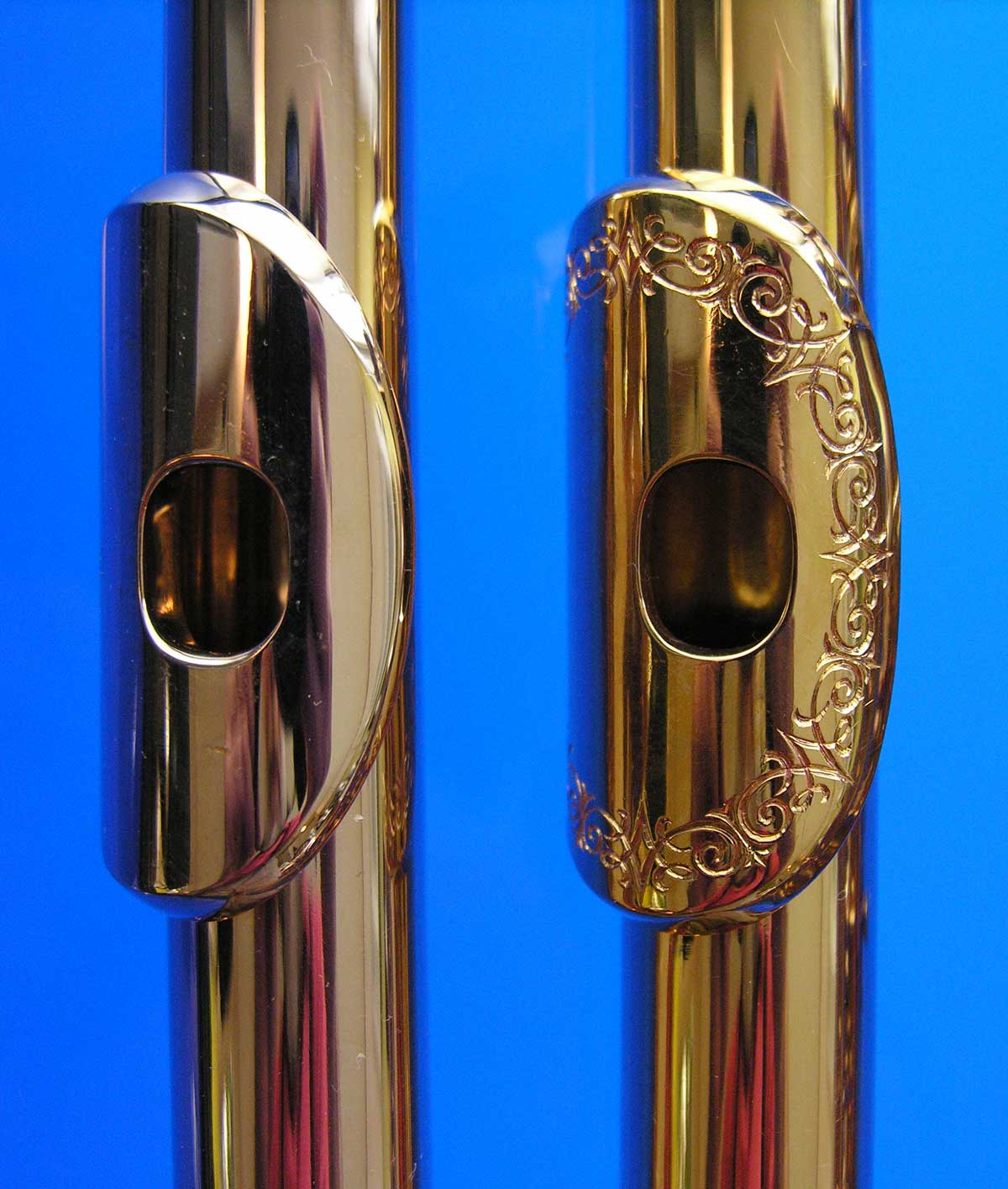 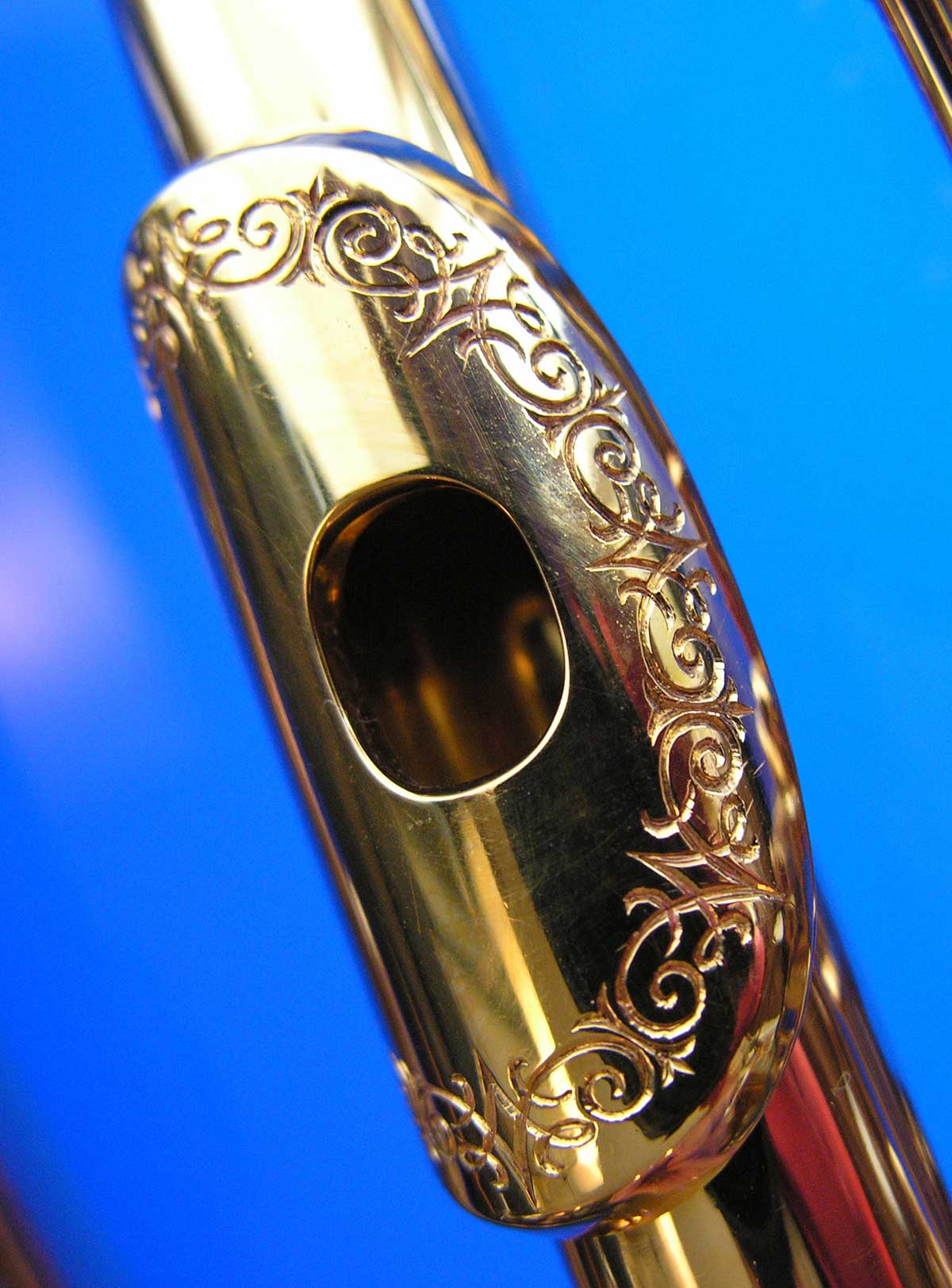 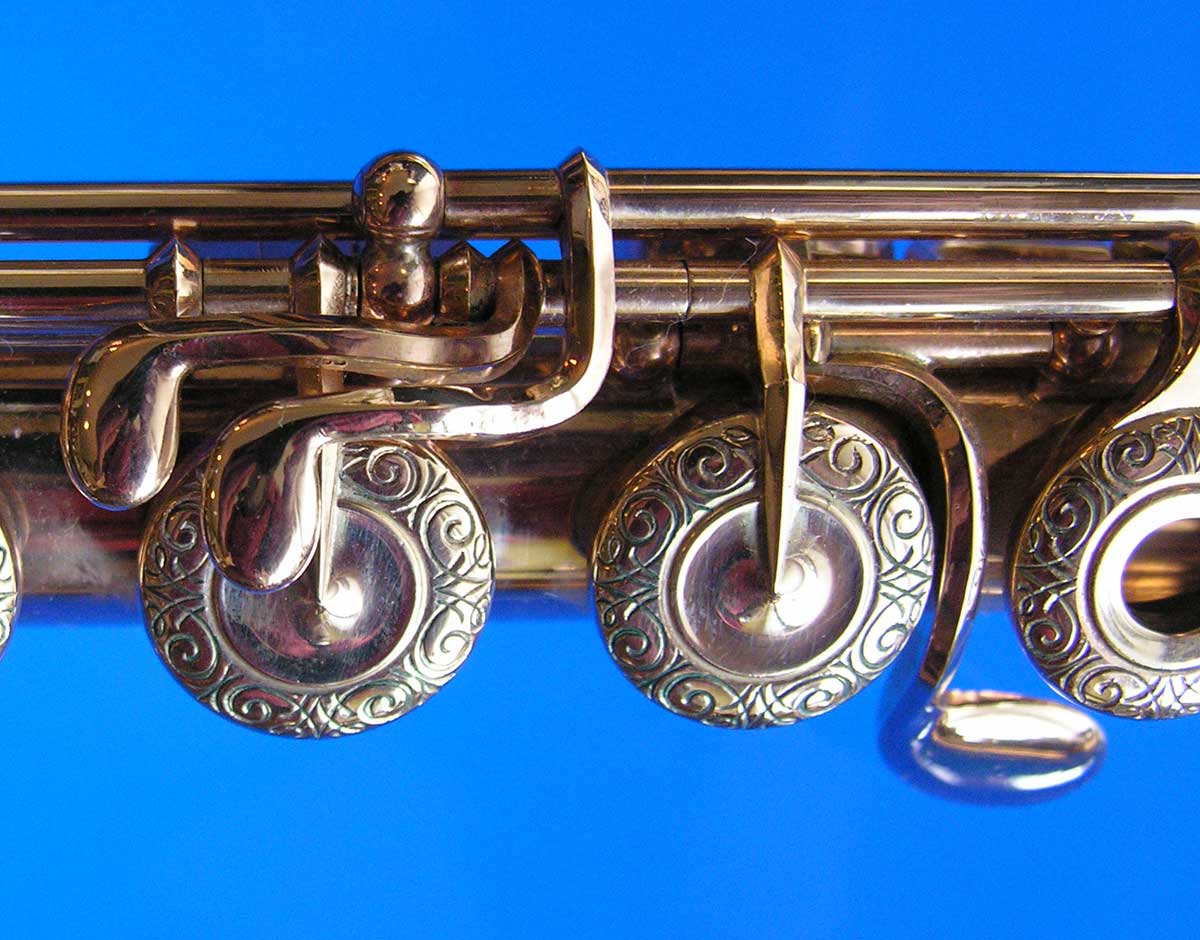 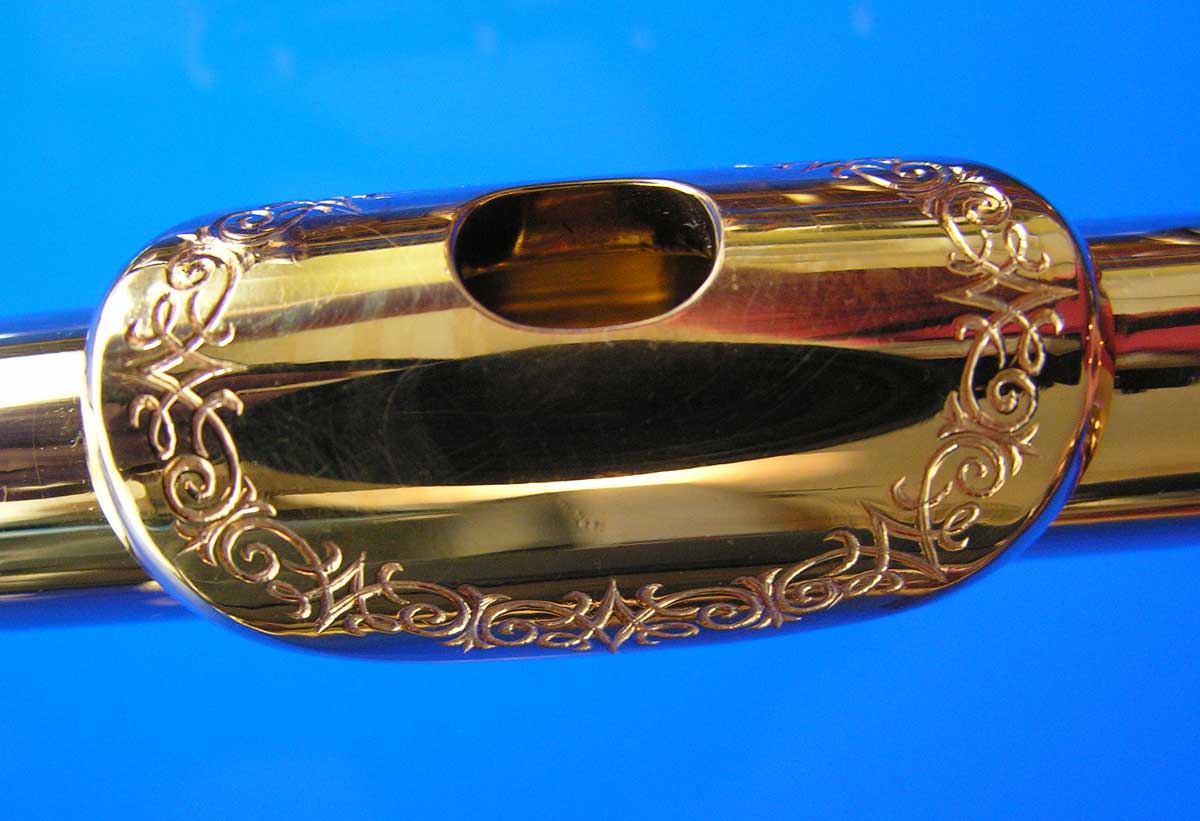 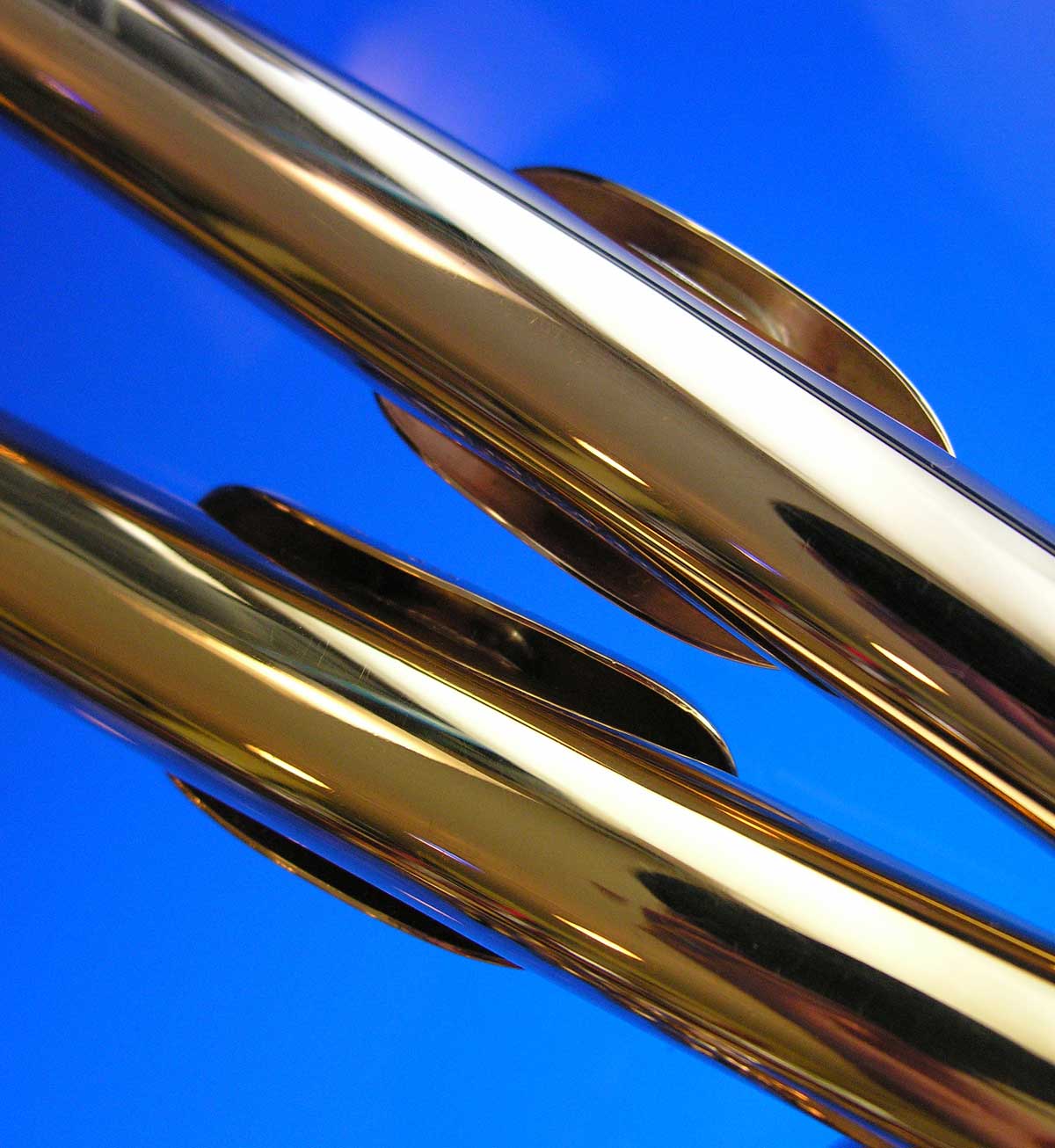 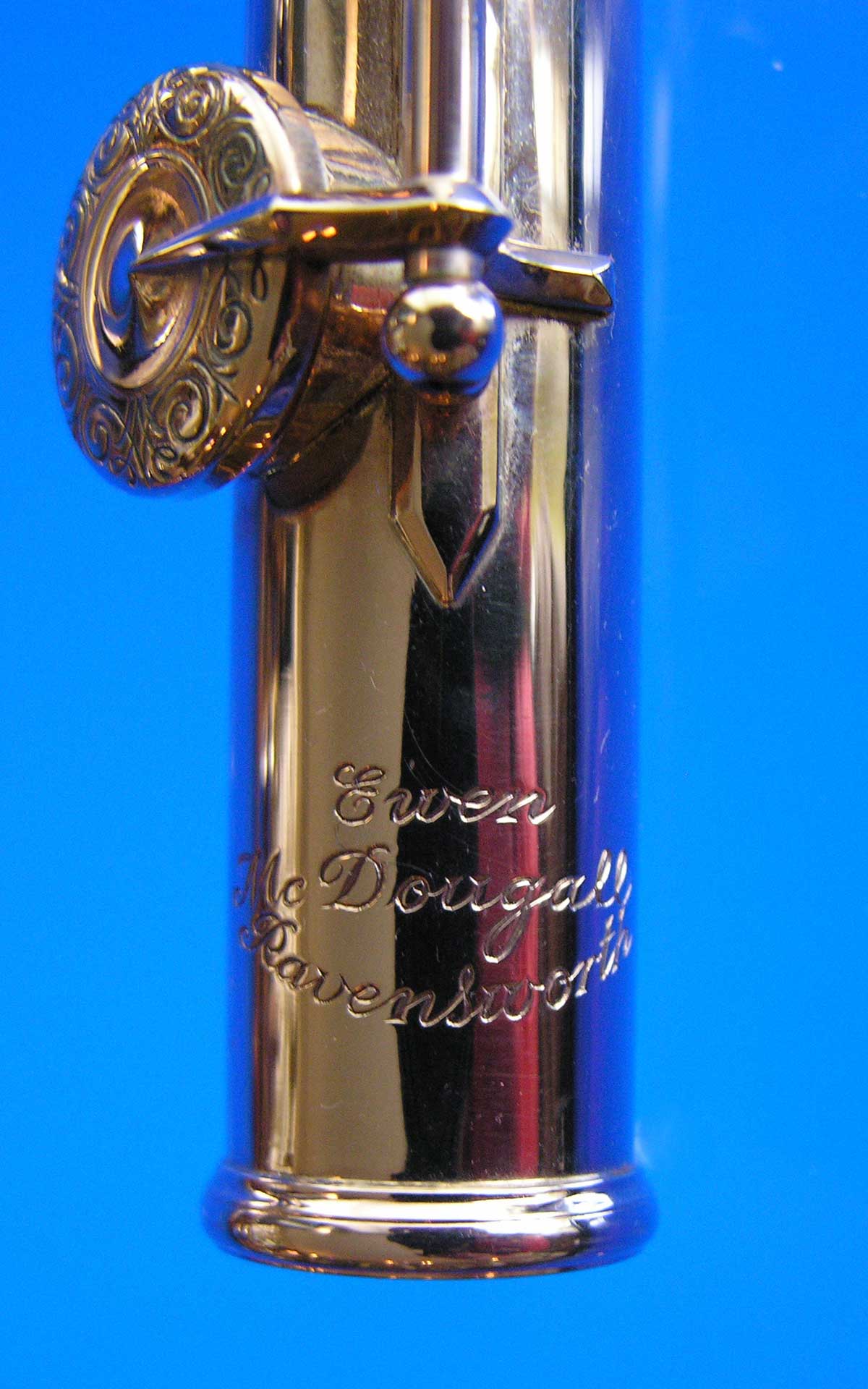 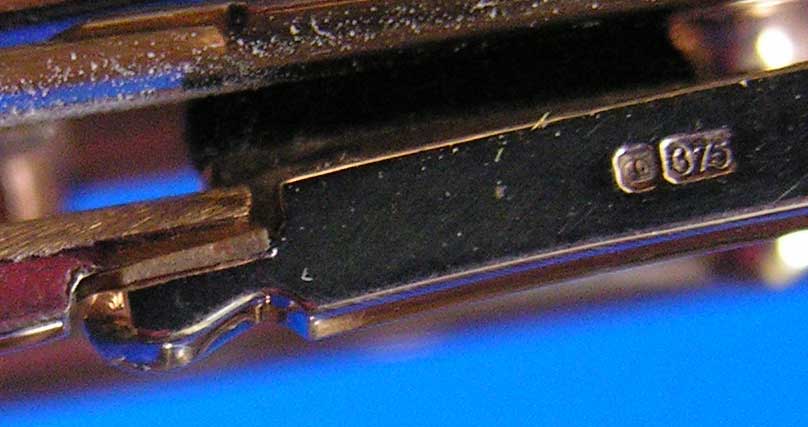 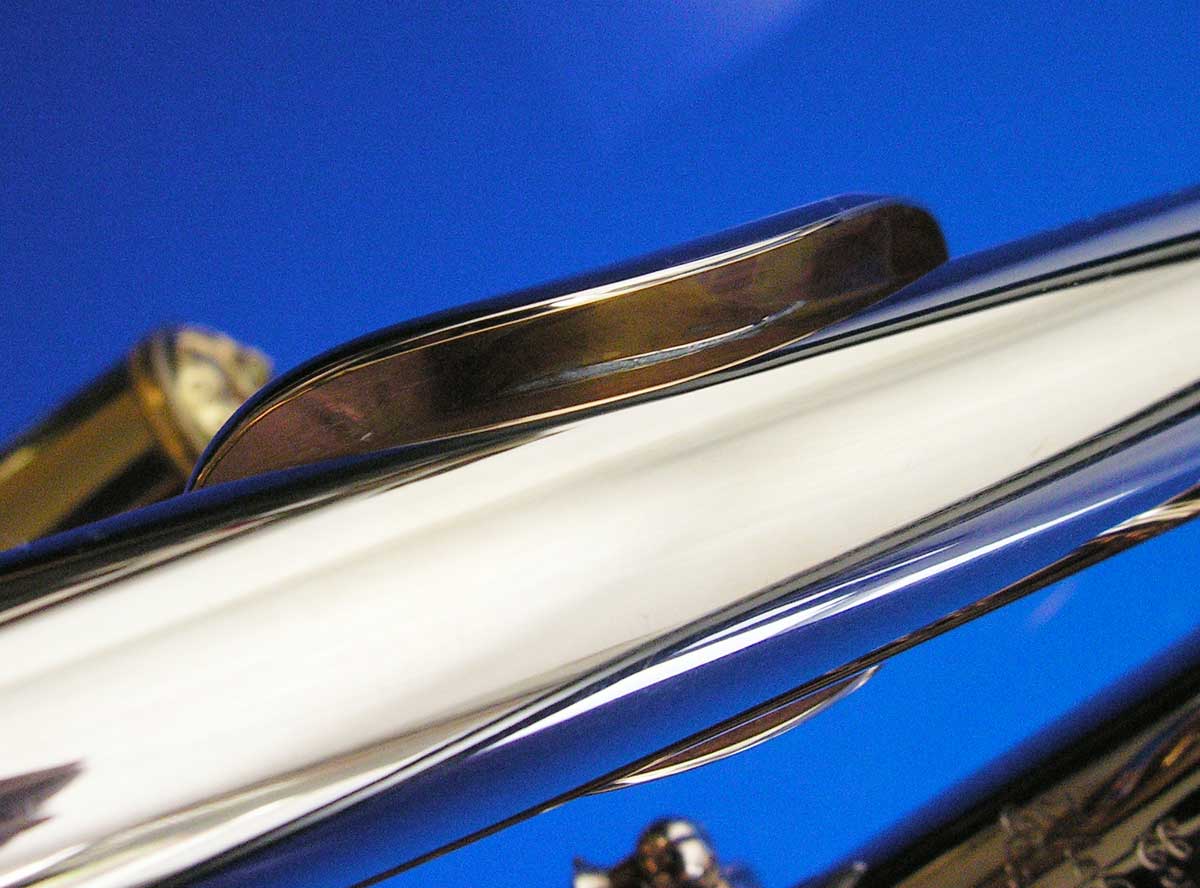 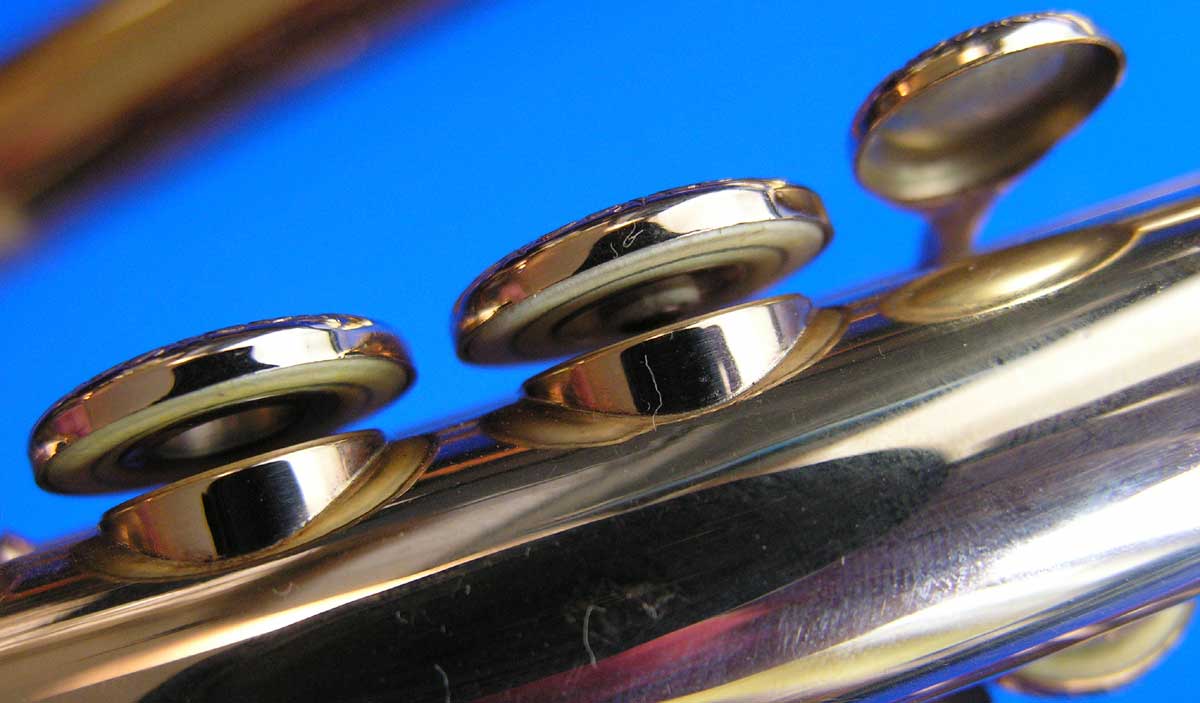 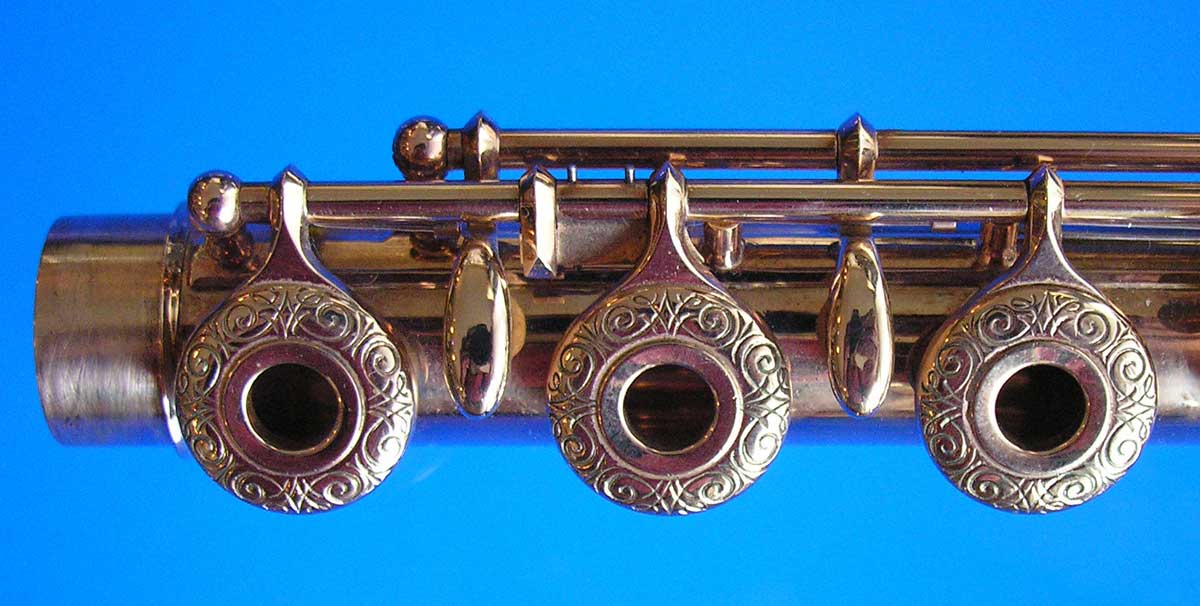