Manufacture Date: Made c. 1859, per estimate of production at c.50 flutes a year, and flute #802 (in the Spohr collection) is dated 1862 (1862 is 14.5 years after July, 1847, giving an average of 55 flutes per year). The numbers on the few Godfroy cylindrical flutes we are currently aware of do not seem to resemble a rational curve when graphed out; we are still not satisfied with any available dating suggestions for these flutes, so our dates are only current guesses. For example, the next dated flute after 802 is #1503, in a case dated 1880; this averages out to 39 flutes per year from 1862-1880 (remember, the patent opened in 1862, so Godfroy and Lot were no longer the only licensed French makers). Certainly there is nothing experimental about this flute. The next earlier flute we know is number 600, which has an extraordinary, experimental side G#. The following flute, # 680, has a special trill mechanism (Tulla Giannini dated #680 at c.1852). The side G# was first used by Louis Lot in 1860. If this flute is indeed earlier, it ascribes to Godfroy the creation and perfection of the independent G#!

Comments: Every one of the very few remaining Godfroy cylinder flutes is of great historical importance. In our ongoing inventory of known Godfroy cylinder flutes, begun many years ago, fewer than 40 flutes are known or reported (certainly others exist or have changed hands, but we are not aware of them). Scholars generally credit Louis Lot as the presiding genius at Godfroy's shop, especially in the designing of keywork and mechanism for the Boehm flutes. This belief is largely based on conjecture resulting from Boehm's friendship with Lot, and Lot's subsequent success after leaving Godfroy's. Nonetheless, the Godfroy silver flutes continued to be absolutely beautiful instruments after Lot's departure in 1855, and numerous tools for building silver flutes were part of the inventories at Godfroy's over the years. We believe some genius remained at Godfroy's after Lot, and the exact artistic decisions that led up to building these beautiful flutes has not yet been completely identified by hand. Furthermore, this instrument shows great originality in the side G#. Either our dating is way off, or this is one of the very first flutes with the completed side G# key. As a player, this instrument possesses a rare, rich and compelling purity of tone.

Material: This extraordinary flute is made of silver, with blue steel springs. Pad washers on plateau keys appear to be silver; on open keys the pad grommets are gold colored. Head cork adjuster of beautiful threaded wood, covered in ornately engraved silver; one of these early Godfroy flutes' most attractive parts.

System: This extremely rare silver flute is the fully completed French Model in use to this day, minus only the Bb trill. The side G# was perfected, and this would seem to be the highest reaches of the silver flute of the time. This instrument was made just as the Boehm flute was becoming accepted at the Conservatoire. Toneholes appear to be of uniform size. No B trill. Lipplate chimney with lower flange only. Embouchure measures 12.2x10.2 mm., and is cut at a bit less than 7 degrees. C foot. The cork screw threads, by the way, are cut with the same thread as Louis Lot #218. The Godfroy stem is a bit wider than the Lot's, so the Godfroy crown screws all the way down the Lot stem, but not vice-versa.

Condition: Overall, this flute is in practically mint condition. Slight wear from use is visible on the keys, especially on the F key. The lower footjoint hole has been resoldered. The embouchure may have been buffed over at the edges, but is unlikely to have been cut. Apparently a little oval plaque, possibly of gold, was attached to the barrel, but has come off or been removed. There may be a little patch in the silver at the top of the headjoint. There is little or no play in the mechanism. This flute is in its original case and is in near perfect original condition.

Case: In original case, which is labeled : Clair GODFROY ain� BREVET� A Paris. No date on case. 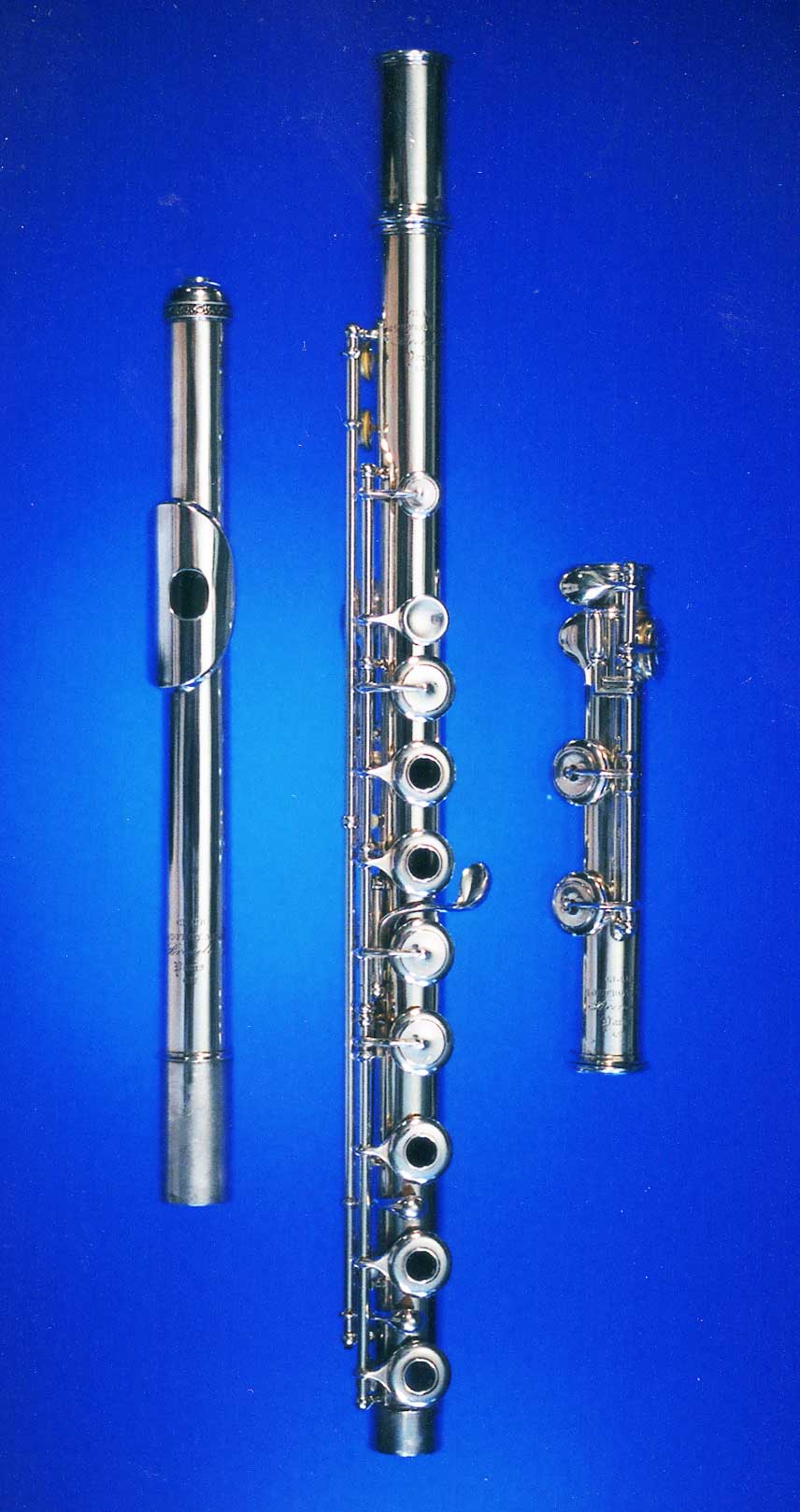 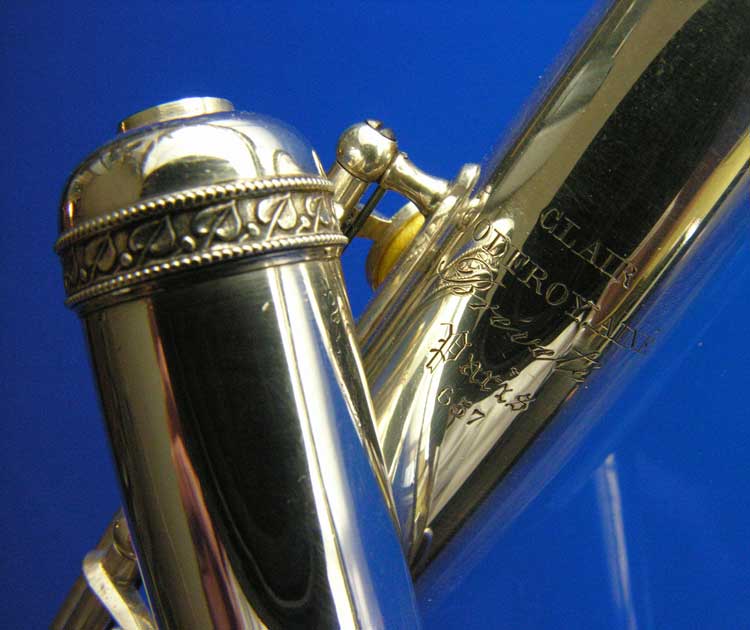 Such an ornamented Capital evokes classical traditions, merging this new flute with the glorious past. 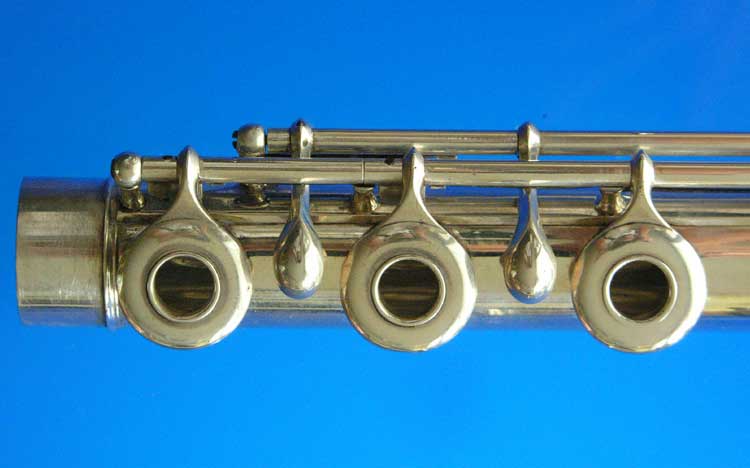 Right hand mechanism, showing the completed design of Lot and Godfroy, made with the exquisite workmanship of the Godfroy shop. 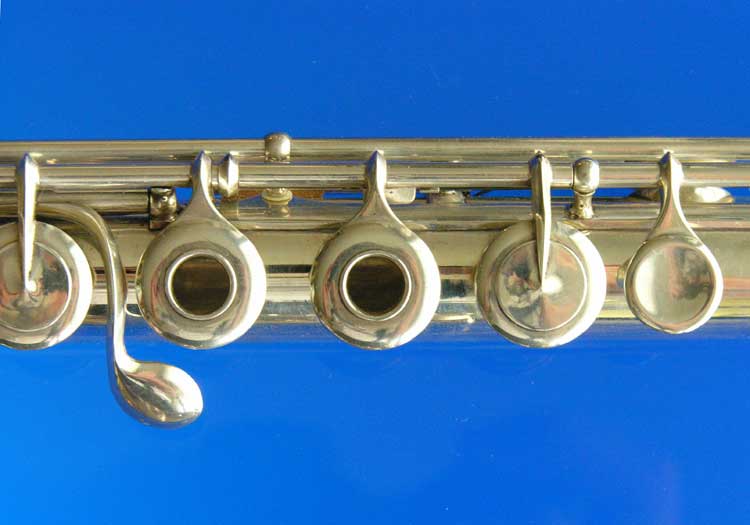 The left hand mechanism shows absolute maturity and artistry in the design. The very delicate, whisperingly pointed G# touch at the left is followed by keys with just a hint of fullness to the curves. 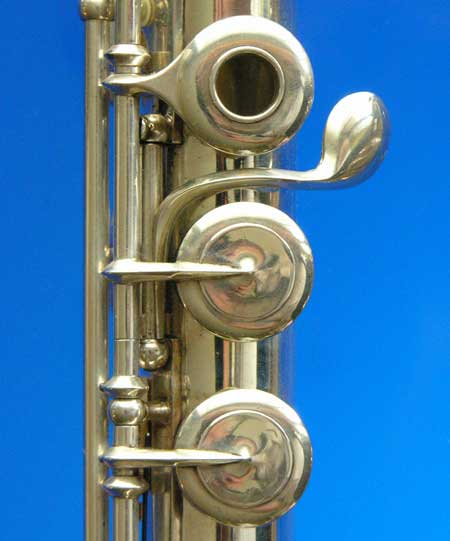 The completed independant G#mechanism, with all the main keys finally on one rod. This is one of the very earliest flutes made with this key. 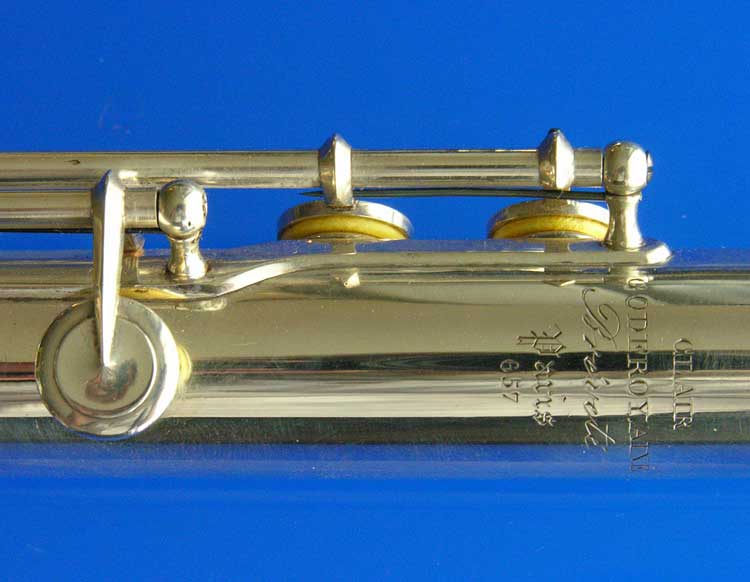 The upper rib, or strap, continues from the main line on down to the trill keys. The tremendous respect for design is seen in the arm to the C# key at left, the turned pillars, and the strap edges. 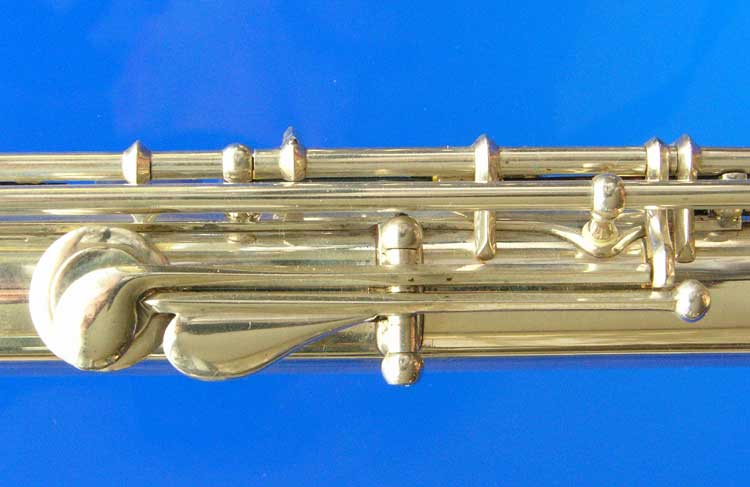 This beautiful thumb key was designed by Godfroy and Lot, and carries on their tradition from the ring-keyed flutes of the ball-ended thumb key. There is no trill key on this flute, so the extra tail that would slip under this ball for the thumb trill is not there. The Briccialdi key for Bb, invented in 1849, is the upper thumb key, which lifts the lever at the right end to close the Bb key. 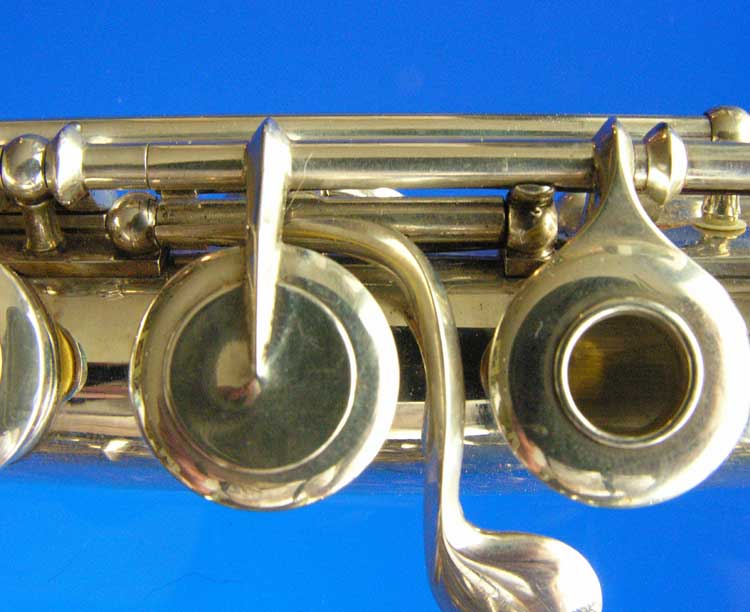 One of the very first flutes with the completed main rod and independent G#. The trill key is not included, whether by design or the lack of it. The upper G# rod post is fitted into a slot, as though they were not exactly sure where it would end up! 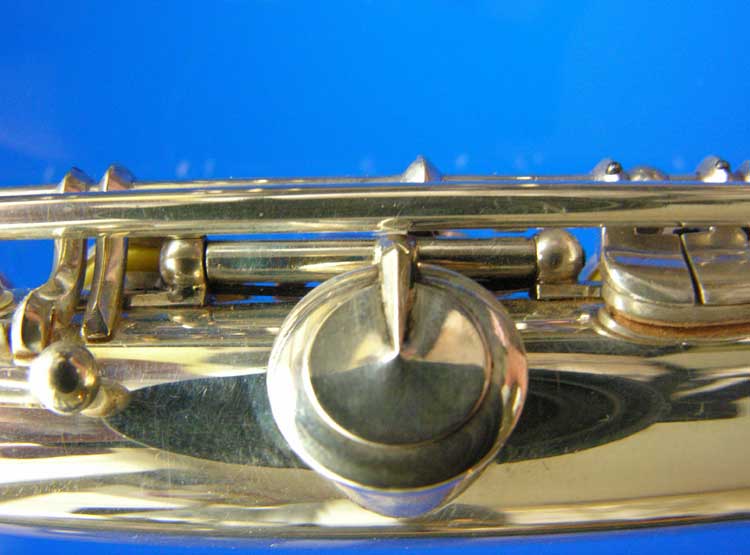 The rear of the independent G#, showing as well the ball-end of the thumb key, and to the right the lovely back clutch which lies at the heart of the Godfroy/Lot mechanism. Here was a chance for prescience to add a Bb trill, simply by attaching a touch to the left side of the backclutch. Alas, players wanted to trill the thumb key, which was marginally more difficult. 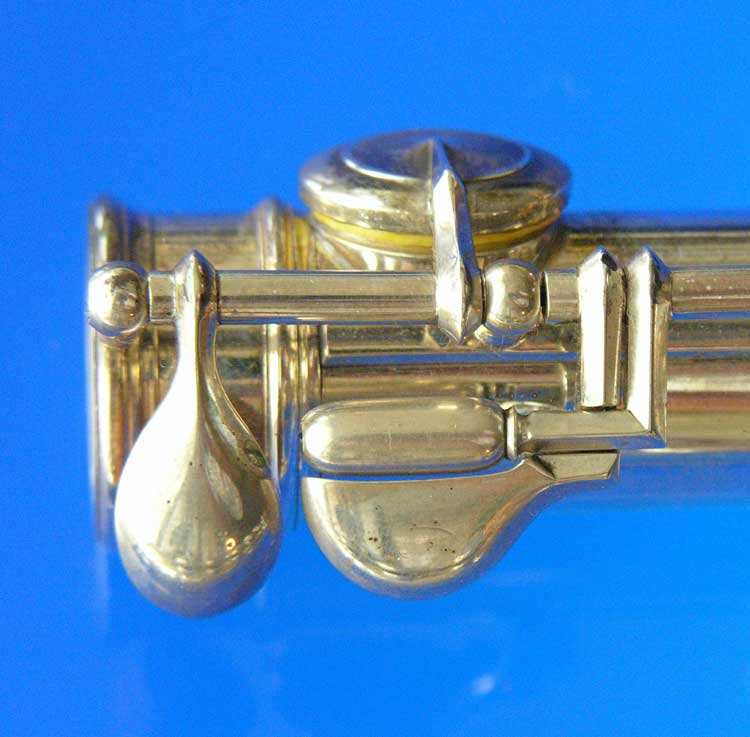 The lovely profile of the cup, the exquisite tear-drop touch, and the sculpted pieces for C and C# show the devotion and skill of Hypolite Godfroy to the standards of design and execution he and Louis Lot had long established. 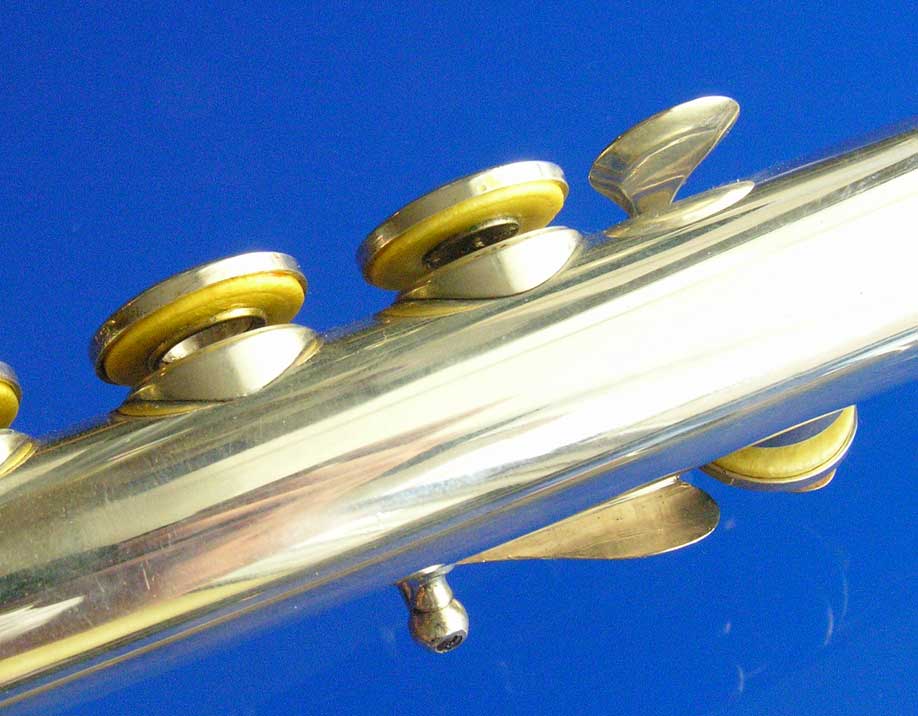 Underneath the keys we see the gilded grommet at the open hole, and the dimpled washer at the covered key. We are also treated to a glimpse of the underside of the C# touch. Much of a flute maker�s character can be seen under this key, which is treated differently by everyone. Here Godfroy has lovingly sculpted the arm directly into the touch, with a flowing bevel that extends around the key, presenting the waiting top to the fingertips of the Olympic Gods. 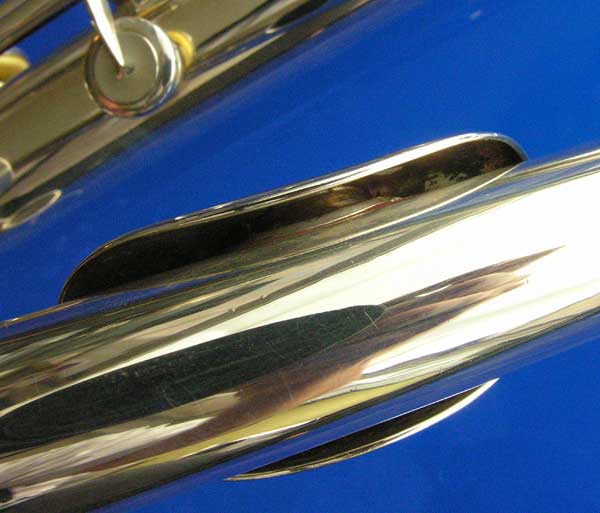 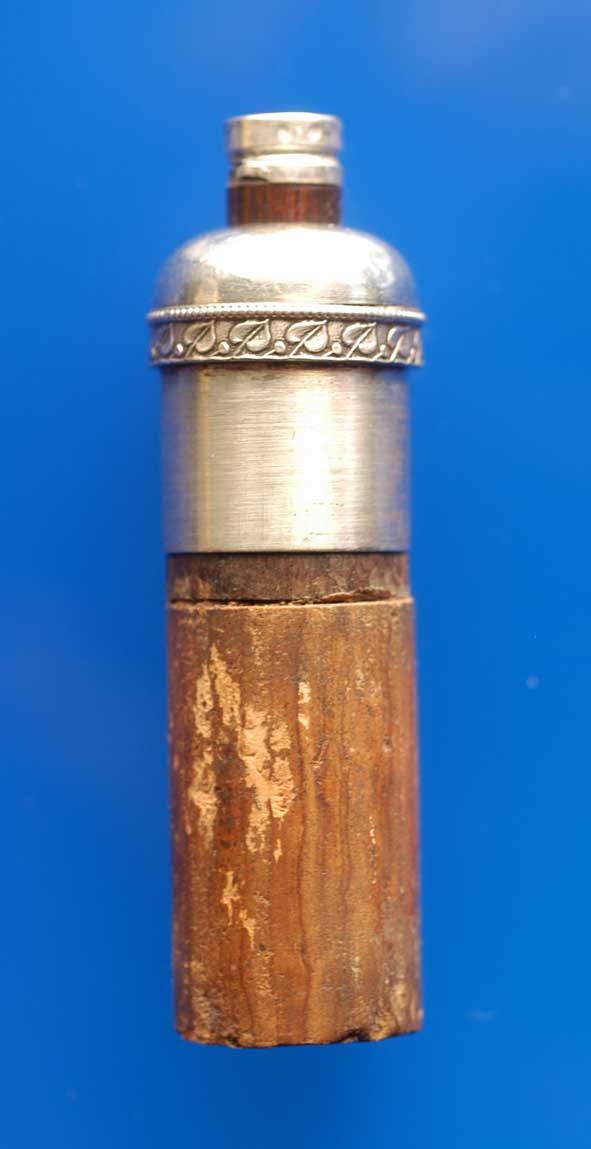 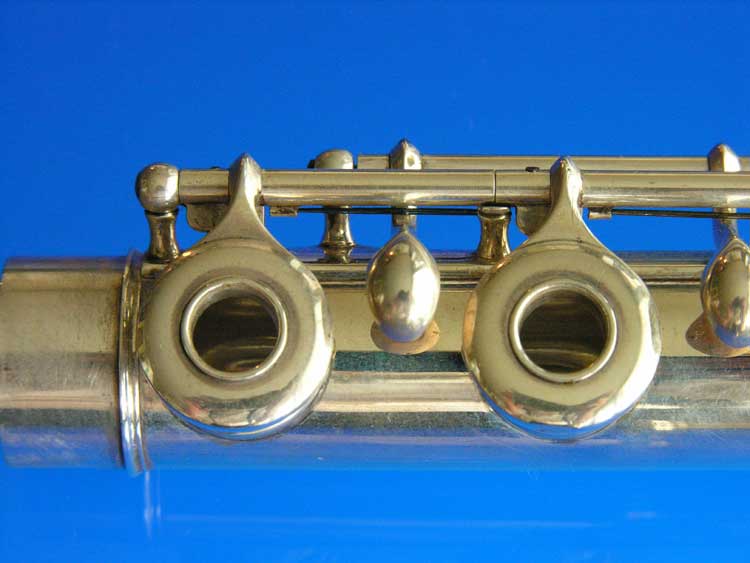 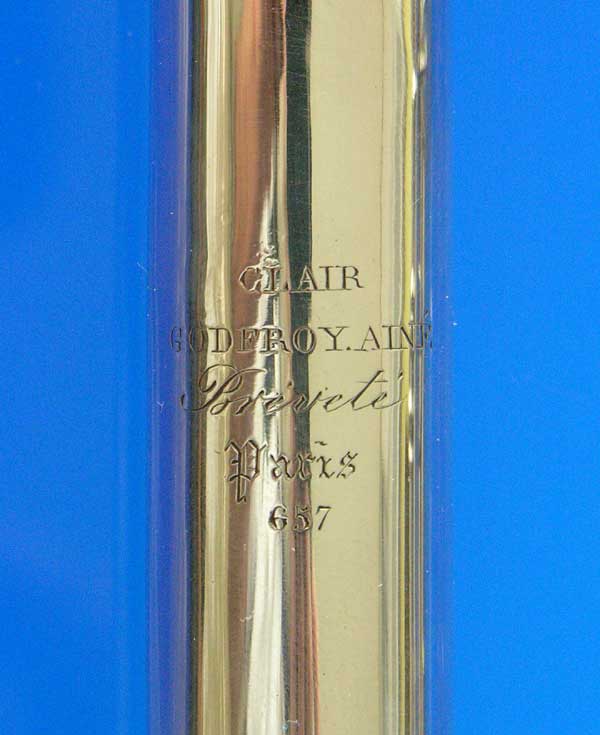 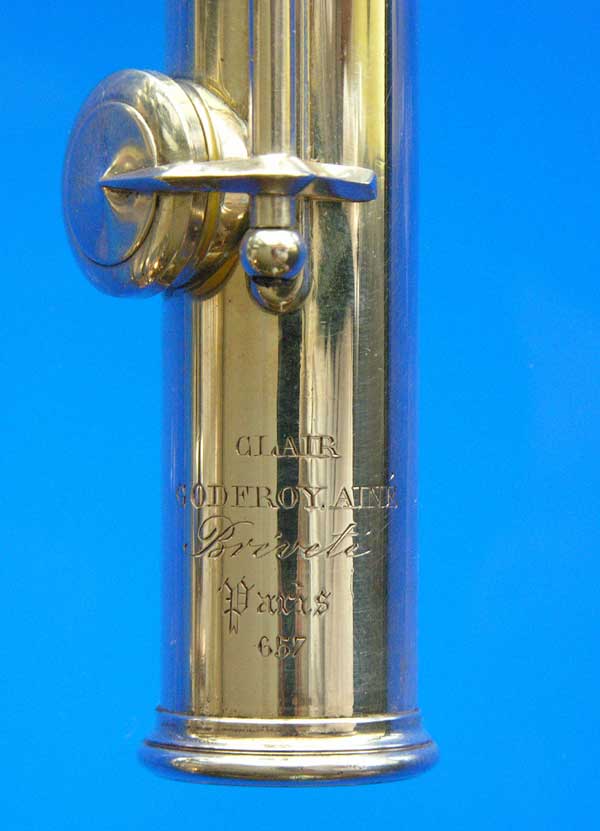