Marks: No marks visible under keys or on straps.

Manufacture Date: Made March 2, 1889 (Louis Lot Record Books). Debonneetbeau de Coutelier retired May 10, at number 4728 (record books), so this was one of the last flutes under his ownership.

Comments: The lipplate solder job appears to be original, and the lipplate looks very nice. The embouchure measures 10.2x11.9 mm, has a strike angle of 7�, and sets upon the flute with a large, delicate plate; these are all characteristics of Lot lipplates. The gold is a lovely color. The tube inside has been fairly recently undercut at the side edges. The gold monogram seems to be the letters "ET" . The absence of numbers on the body is modestly unusual; all that remains in the numbers space are two small marks that look like the number "11", but clearly aren't. The absence of a stamp on the foot is not unusual. The footjoint marries in every way the workmanship on the body. The mechanism and keywork, and the hallmarks, are what we would expect from a 4000 series Lot. The original Lot records show that this flute was made with a gold lipplate, and this appears to be the original plate. The body also conforms to the record book description, although the identity of the purchaser as A. Bacot does not jive with the monogram of "E.T.", unless Bacot ordered this for one of his students, which certainly makes sense. All in all, this is a very fine Lot, with excellent playing characteristics, including an extraordinarily rich and woody tone.

System: This is the standard design of Louis Lot, with a Bb trill. The experimentation with adjusting screws undertaken in the 3000 series had been abandoned in favor of this older, simpler model.

Condition: This presentation flute appears to be in very good condition. Some signs of usage are apparent, including a shortening of the headjoint by about 6mm (the headjoint ring may have been moved). The lipplate is beautiful, but there are fairly recent signs of work inside, including some undercutting of the tube on the sides of the hole (visible only with a mirrror). The mechanism has been tightened here. The flute plays wonderfully, with a full, rich, and loud sound. This flute is listed in the remaining record books. It was delivered March 2, 1889 to A. Bacot, Chef de Musique, Roanne Loire. The flute was a #5, or standard C foot. The gold lipplate is original. The monogram is described as "graveur sur le manchon". It originally had a rosewood case (now lost), and sold for the relatively high price of 660F (the standard #5 was 525F).

Pitch: This flute seems to me to play a tad below A=440. It was probably originally pitched at A=435. The body scale measures 22.7 cm, which is usually found on 435 flutes. The headjoint is cut already, and the ring is easily moved to bring the pitch up if necessary.

Sounding Length: The sounding length is 60.5 cm, to the center of the embouchure. 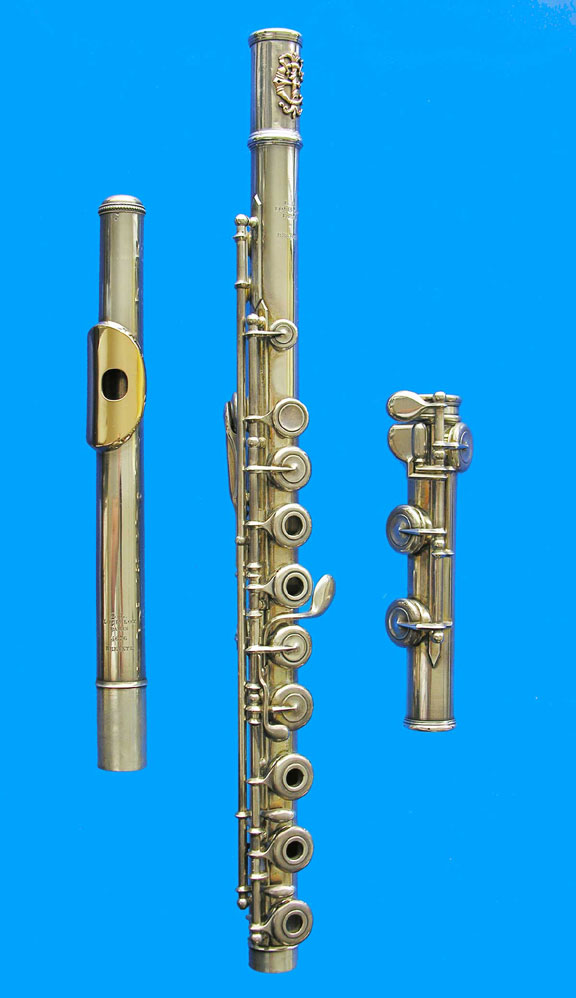 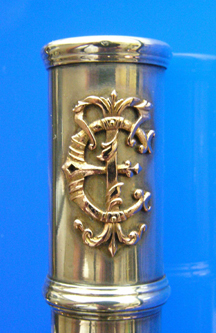 This ornate gold monogram is listed as, �Graveur sur le Manchon�. The central letter has a remarkable, delicate, filigree. 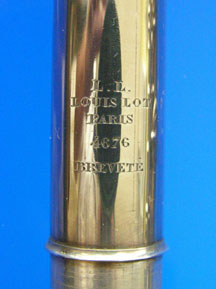 The Louis Lot stamp now lacks a hyphen, as seen here on the headjoint. The ring has been moved about 5mm closer to the stamp. The bottom of the headjoint has been trimmed, to bring the usable pitch higher than the original A=435. 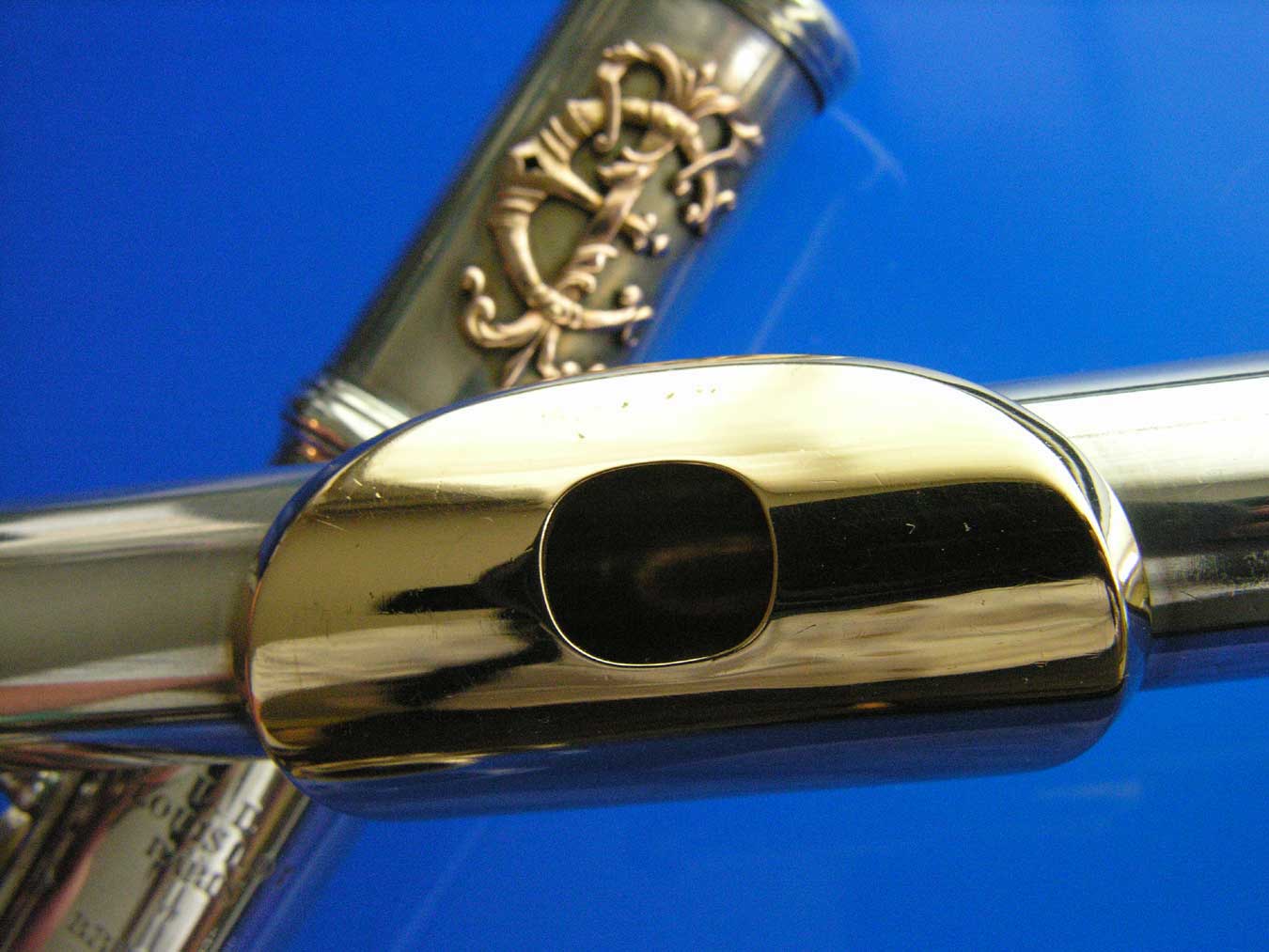 The beautiful gold lipplate is untouched on the outside, although slightly undercut on the inside edges.

The original order for this flute is dated 2 March, 1889. The handwriting is that of Debonneetbeau de Coutelier. 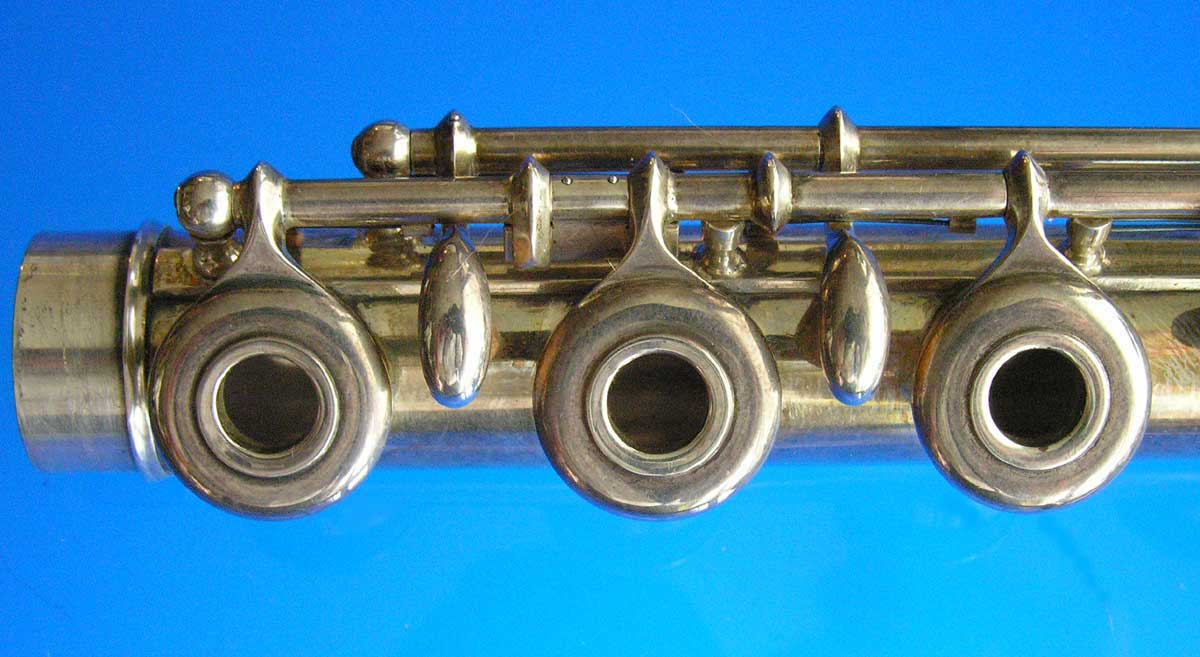 Debonneetbeau outdoes himself with the strength of character in his Bb trill key, here seen in it�s vignette with the G# touch. This trill key is listed as �Cad(ence) Si� in the French style. 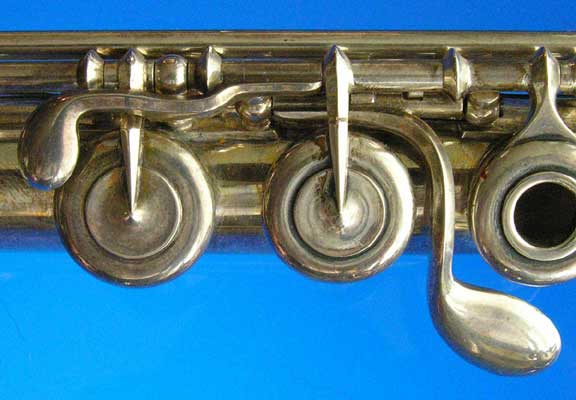 The separation of the upper rib at the trill keys had been done by Villette. The body stamp indeed appears to be �stamped�, rather than engraved as the headjoint is, in typical Louis Lot fashion. The pillars are turned with a slight heaviness at the bottom, perhaps reflecting previously unknown dimensions of Debonneetbeau. 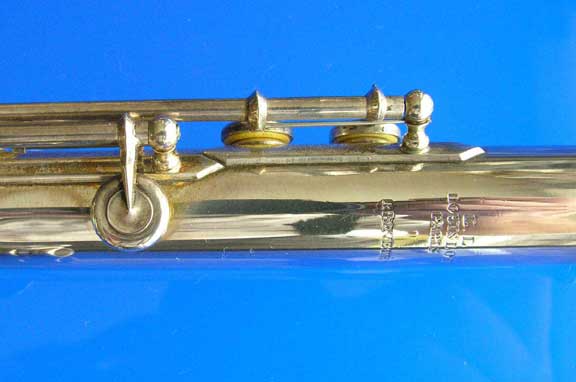 The thumb key could be shortened, with a decorative end, once the B trill was out of fashion. 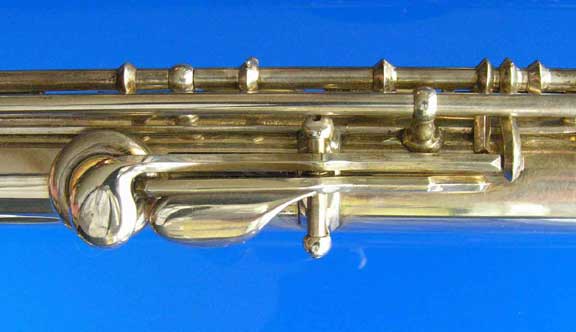 The upper body with Gold escutcheon. 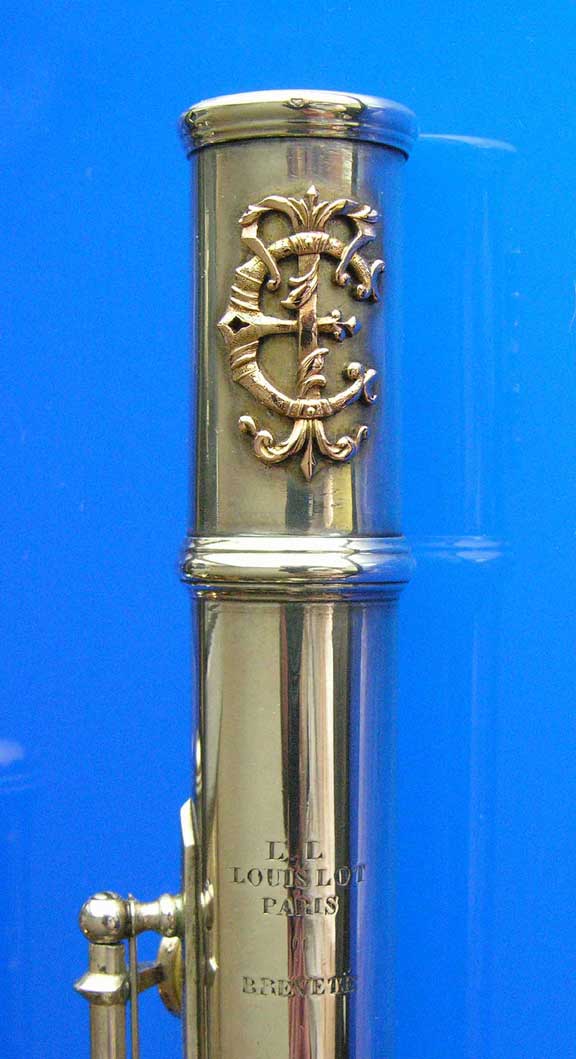 The beautiful Debonneetbeau footjoint, with the pinless C, and the signature flat-topped, spatulated teardrop.

Debonneetbeau strengthened the C# touch with this triangular �under-arm�. 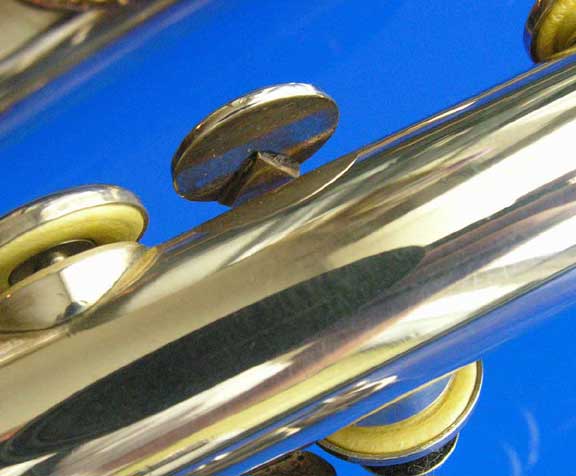 The backclutch is modest, with a curious bevel on the Bb arm. The rod for the Bb trill is lengthened for a strong base to the key. 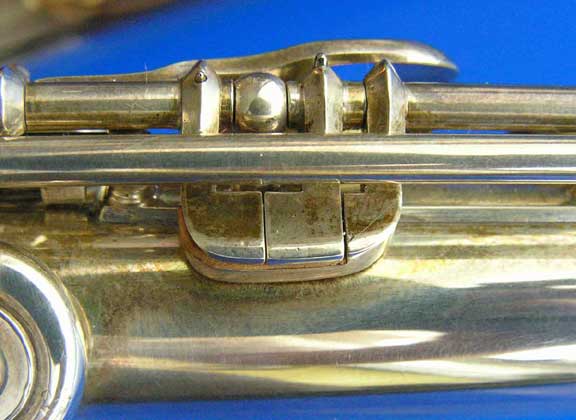 The tail end of the thumb keys shows the old briccialdi Bb lever, under which the top thumb key slips. The bottom key no longer extends beyond the top key, since a B trill was not ordered, and a fancy end has been fashioned for the key tail. 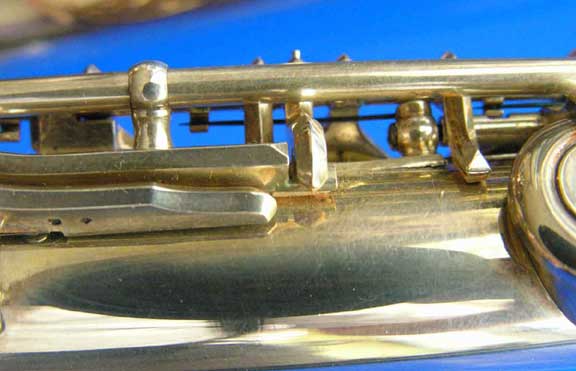 The Bb shoulder clutch is boldly shaped, in keeping with the overall character of this power-full flute. 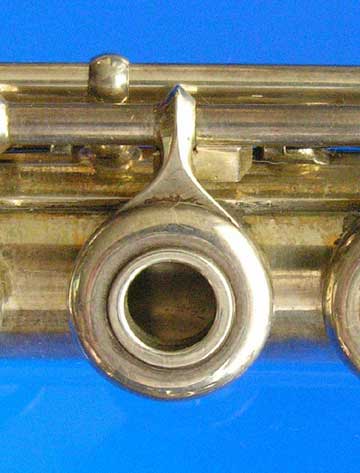 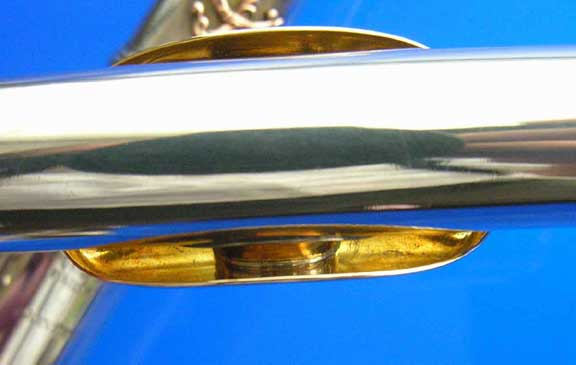 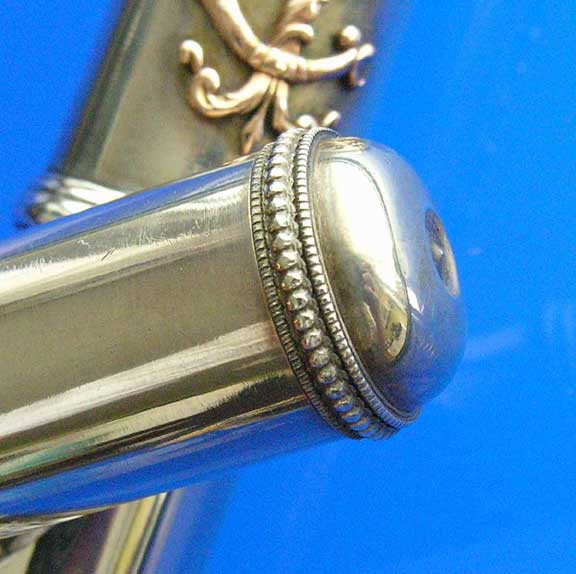 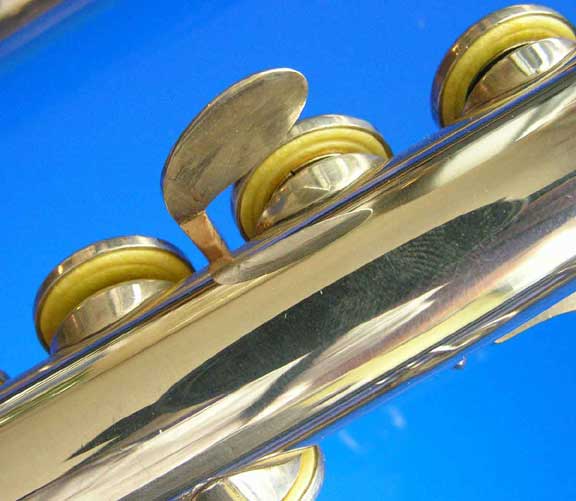 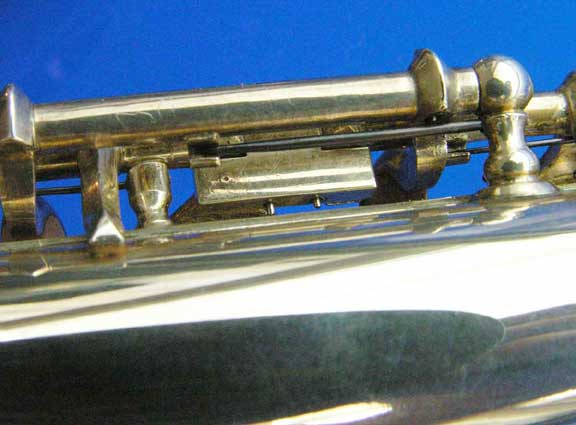