No serial number, as usual.

Manufacture Date: This flute is an entirely new model from the typical Boehm and Mendler flutes. It appears as though the market forces had finally convinced these gentlemen that a French model Boehm and Mendler was finally necessary. Throughout Theobald Boehm's published correspondence (provided by Ludwig Boehm), he is constantly responding to requests for flutes with the thumb keys and G# of Louis Lot. Boehm vastly preferred his own system, and was especially contemptuous of the ludicrously complicated Dorus G#. Even after Godfroy and Lot had successfully adapted the side G# to their mechanism, Boehm preferred to build his occasional closed G# as a single closed key, with no duplicate hole. Boehm, in 1877, described the famous "Macauley" flute (now in the D.C. Miller Collection) as "the last flute I shall ever make and the best I have ever made; it is the 'last child of my life' with which I hate to part." Nonetheless, he clearly continued to take part in the flutemaking business, as his correspondence shows. His published letters include flute business matters through to his last letter, dated Feb 16, 1879, in which he mentions, "I have now finished a new flute model, which is the best flute I ever had in my hands." It is possible that Boehm himself participated in the design of the "new model" flute illustrated here, the official "French model" Boehm flute.

Hallmarks: No hallmarks. Although the instrument is of silver and gold, we have never seen hallmarks on Munich flutes.

Comments: We are once again astonished at the workmanship from the Boehm and Mendler shop. Unbelievably, this flute is of even higher quality workmanship than another silver and gold Boehm and Mendler here now. Although the flute was made at A=448, it has clearly been used at c. A=440, since the headjoint tenon shows a mark some 9 mm from the ring. The most amazing tidbits of construction are the precisely turned silver rings, which taper on both sides to form a distinct, very sharp, ornament. Seven of these delicate rings were made for each flute. Only a master watchmaker would have the desire and the skill to make these, which of course was Mendler's trade before Boehm enticed him to make flutes. Although Boehm eschewed the closed G# and the French thumb, these are here built absolutely beautifully, and are clearly not simply appended onto the open G# flute. The trill key touches are of the early, Lot-like design.

Material: Silver tube and keys, with gold lipplate. Cork screw is a metal rod. Springs are of gold, and all appear original. Pad washers are Boehm's classic flats with a leather sub-washer under the round-headed screw.

System: This flute is one of the very few instruments Mendler built with the French style G# and thumb keys. It is Boehm's full professional model, complete with Schleif-octave key. In order to accommodate the pillars for this system, an entirely new strap had to be designed. This flute has a C foot, B trill, independent closed G#, French thumb Bb, and Schleif key.

Condition: In our opinion the condition of this flute is nothing short of miraculous. It was purchased in Vermont around 1910 and used briefly as a child's student flute. It remained in the family, and the current owner is the granddaughter of the earlier child-flutist. Unbelievably, the flute is in excellent condition. The only accidents occurred at the G# lever and the high C# pad cup arm, both of which have been resoldered to the hinge-tubes. Every pad washer and screw appears original. The lipplate is as clean as a newborn babe, and has never been resoldered or messed with. I am only afraid that the steels were all rusted, and have been replaced. They were very difficult to remove, and do not appear to be original.

Pitch: This flute appears to have been built to play at A=448, yet it has clearly been played at a lower pitch, probably close to A=440. 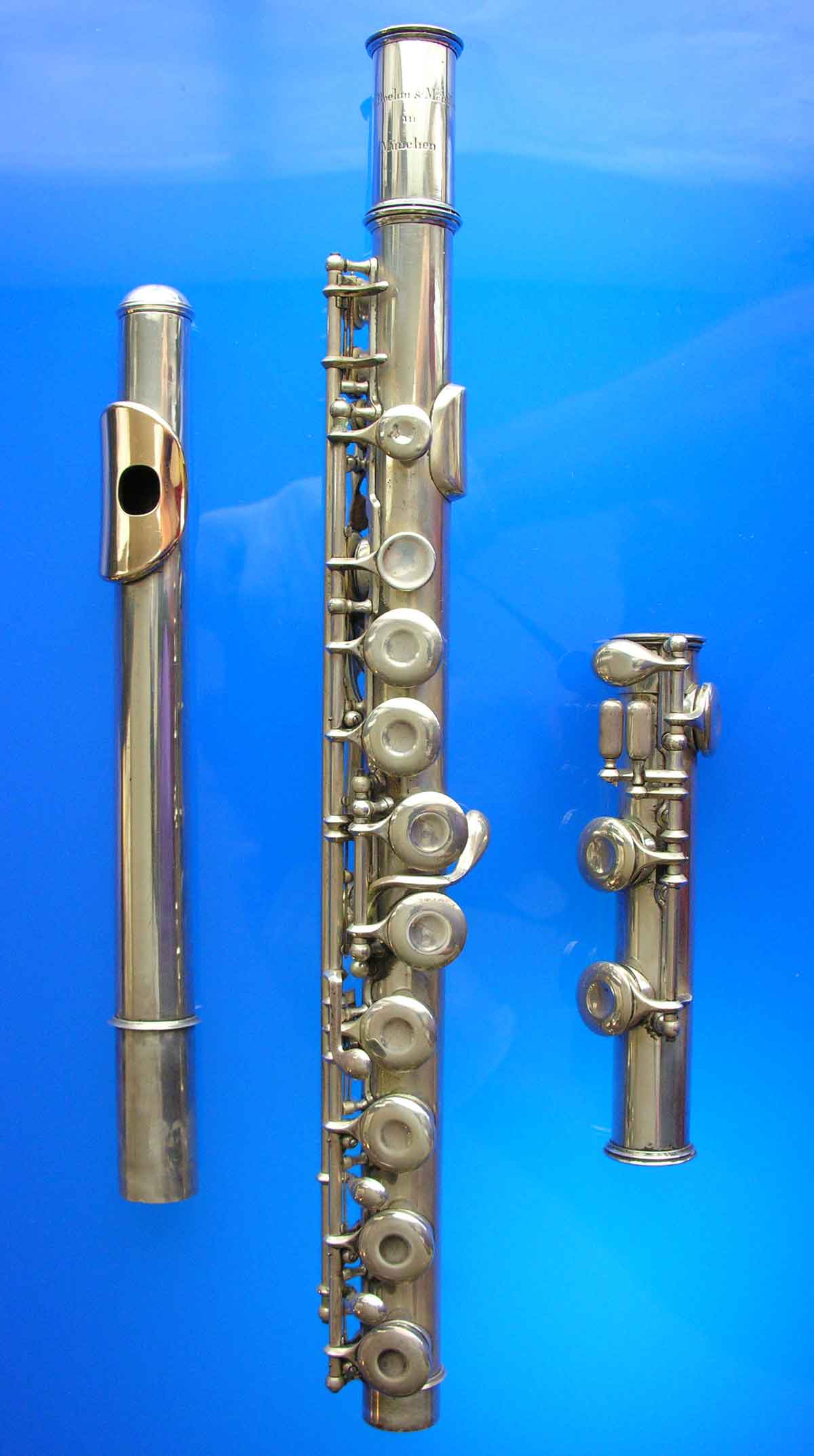 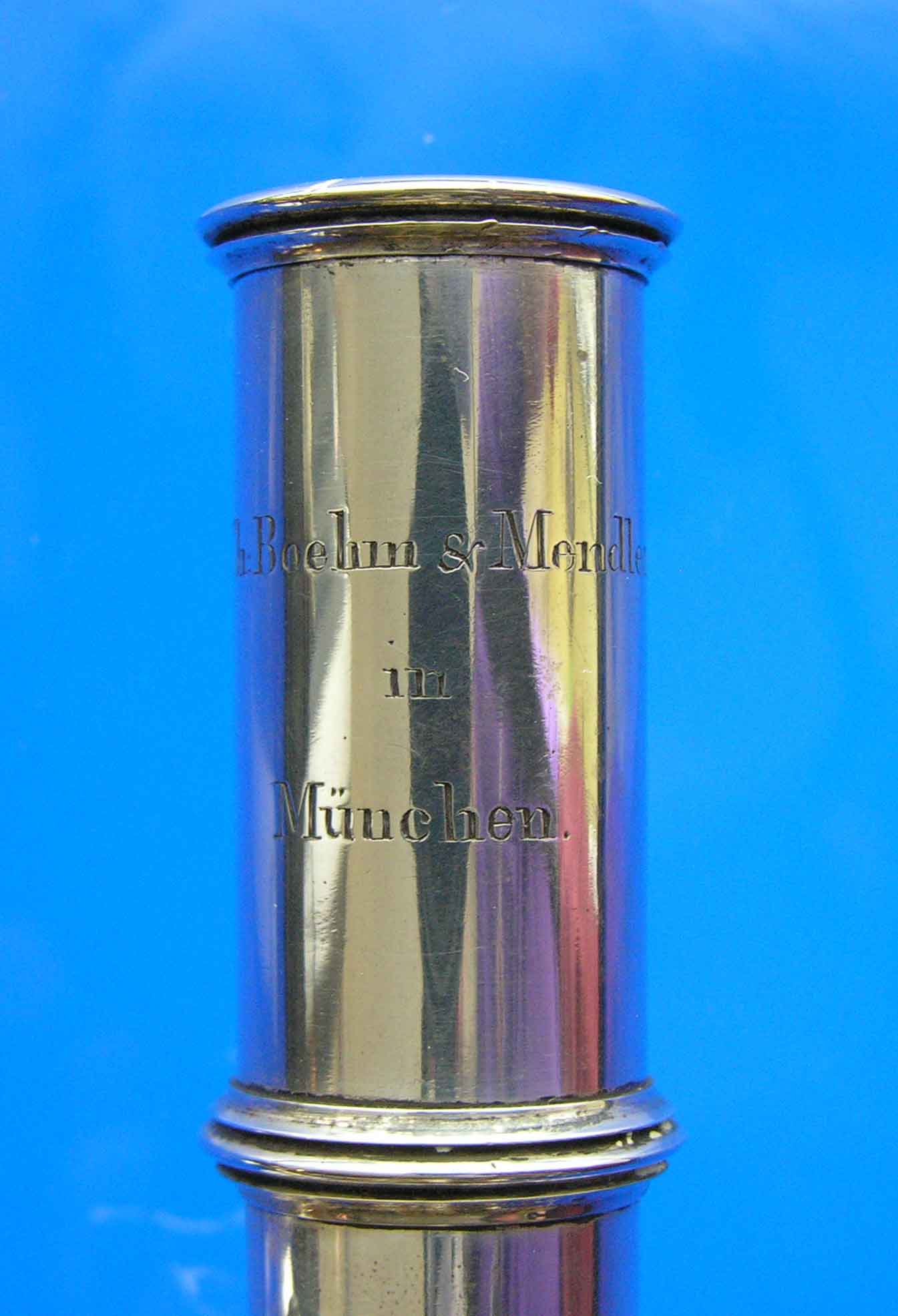 Boehm and Mendler did everything to the highest standards, including their engraving. 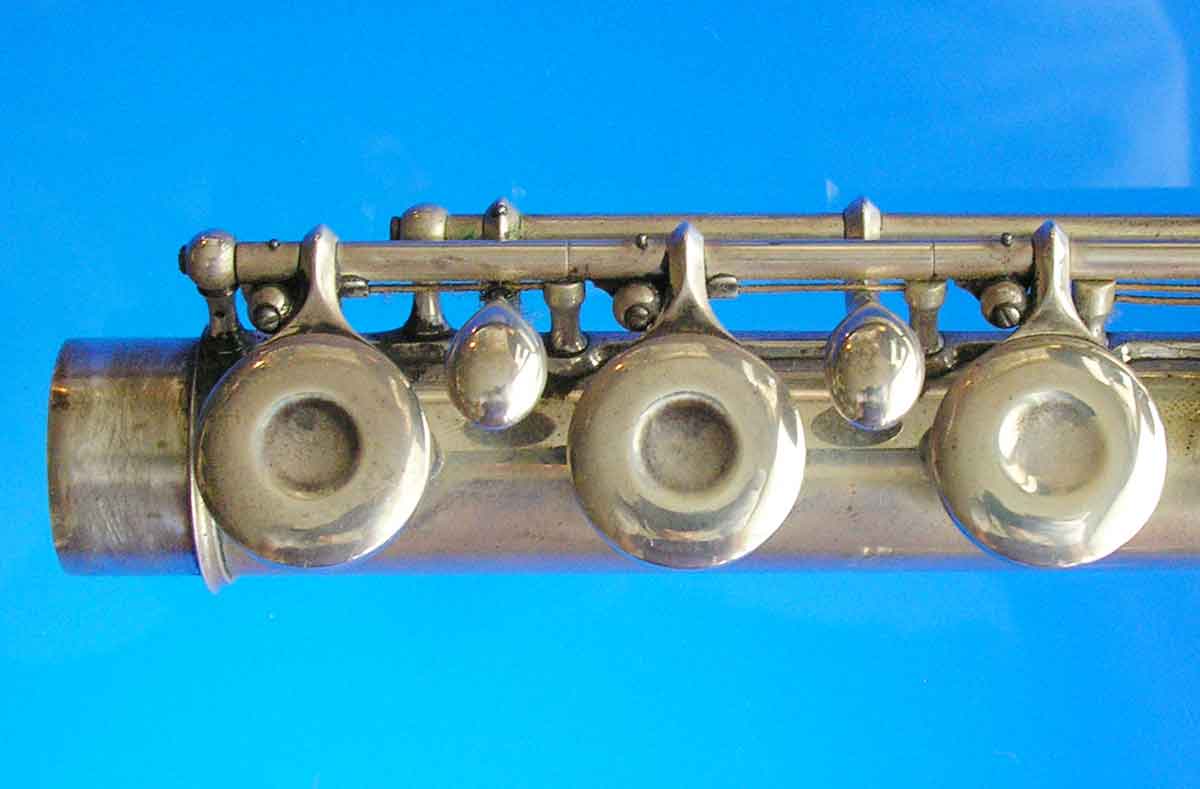 Boehm and Mendler copied the Louis lot mechanism, adding adjusting screws at the shoulder clutches here on the right hand. 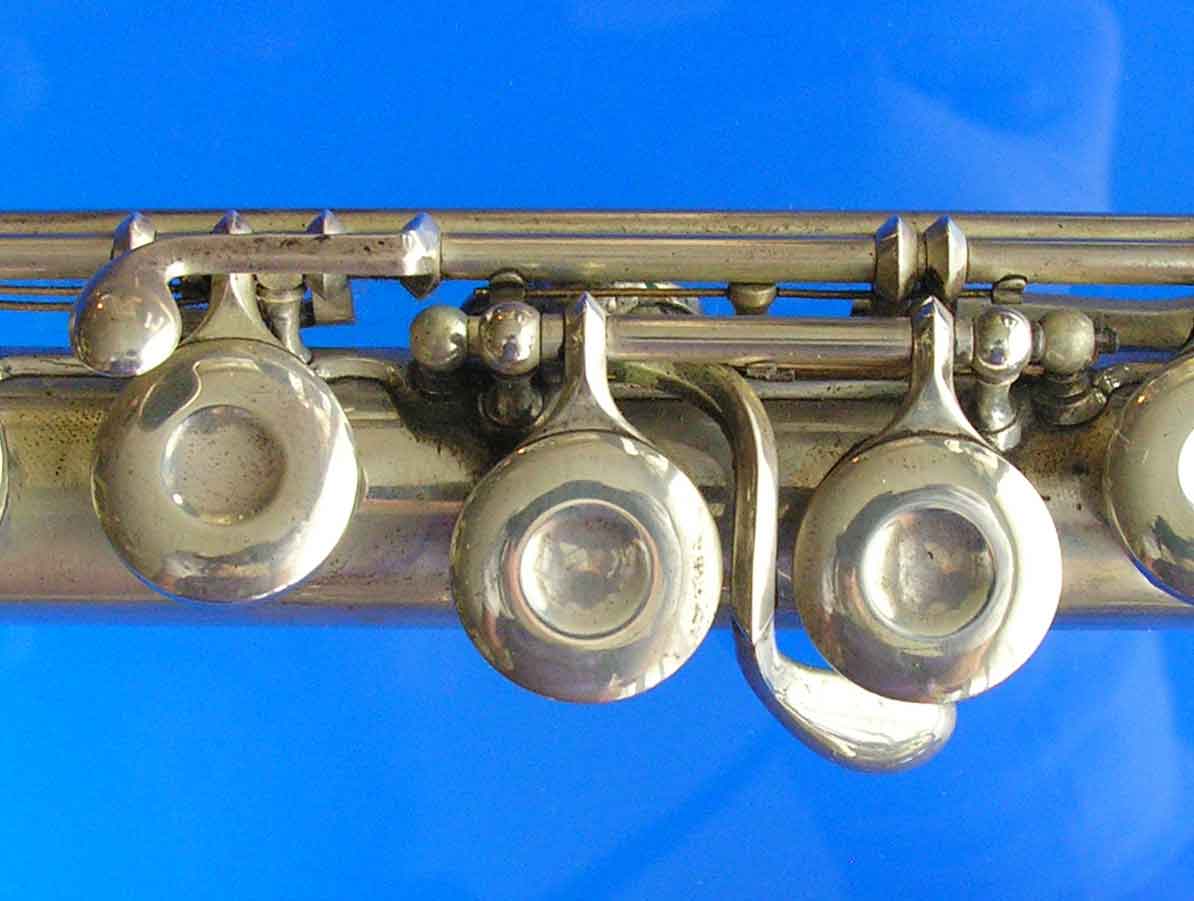 The lovely aesthetic of the G# key curving into the arc of the B trill key is slightly marred by the modestly bent G# touch. 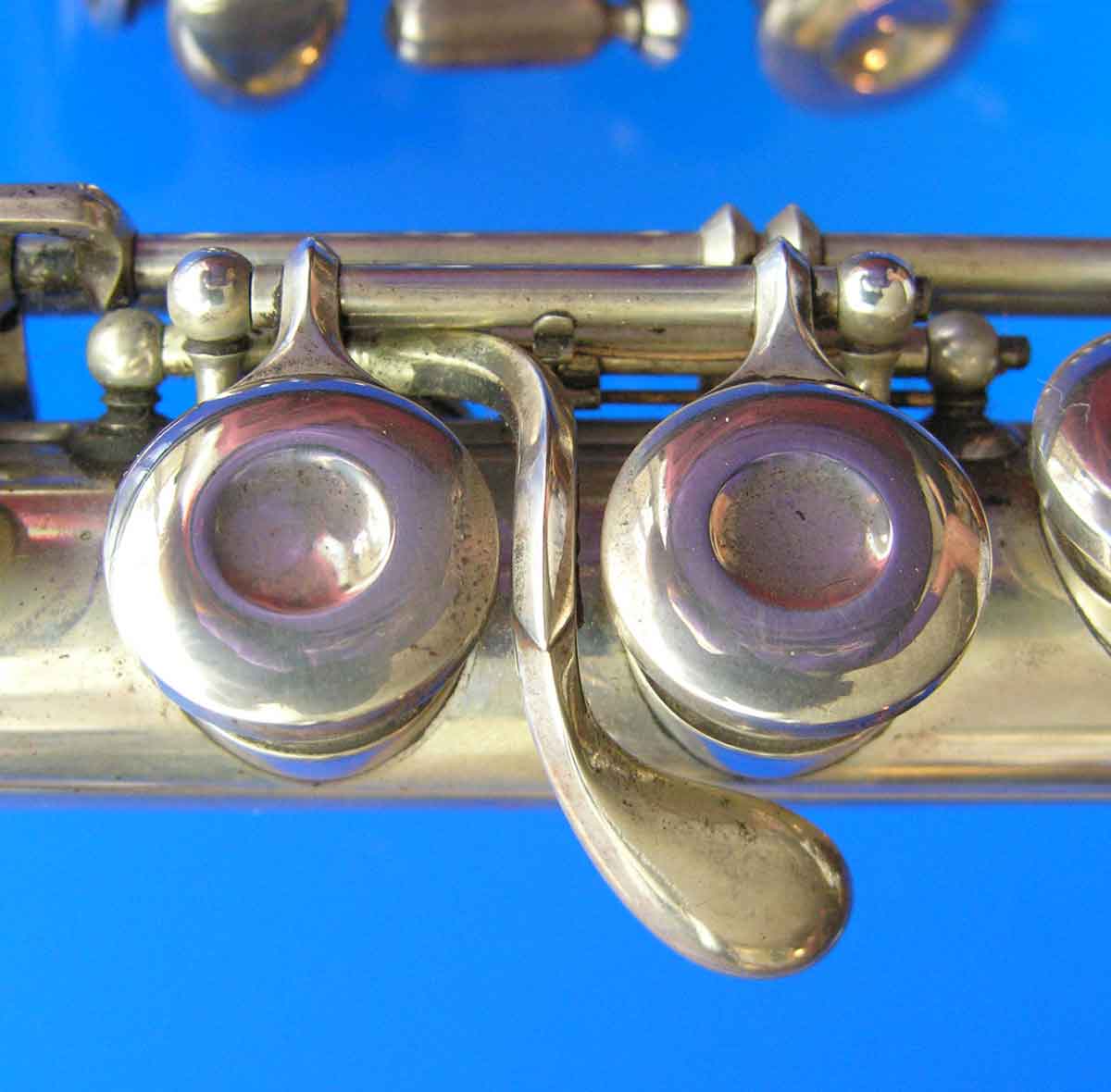 This is Mendler's beautiful silver work at the G# touch, which is specially built for the French closed G#. 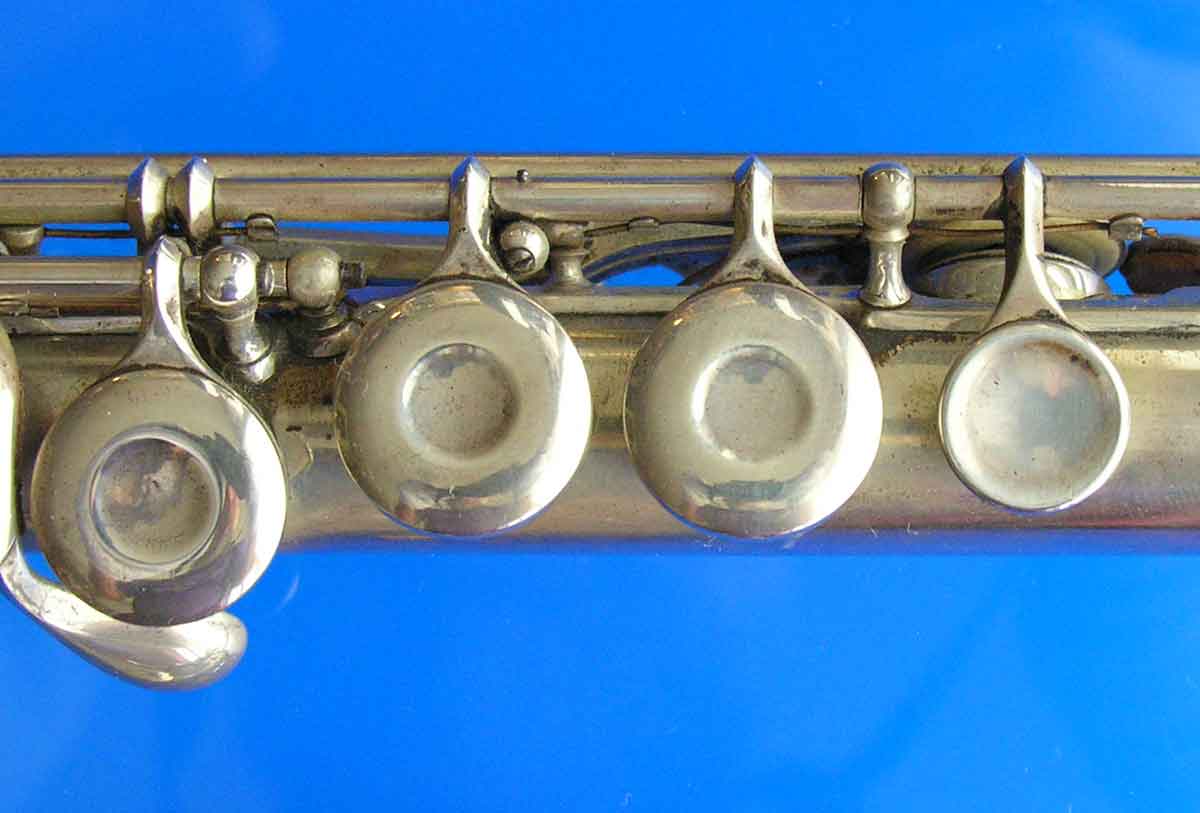 The left hand keys show Mendler's lovely covered keys, the set screw at the shoulder clutch, and a peek at the strap curves specially made for this system. 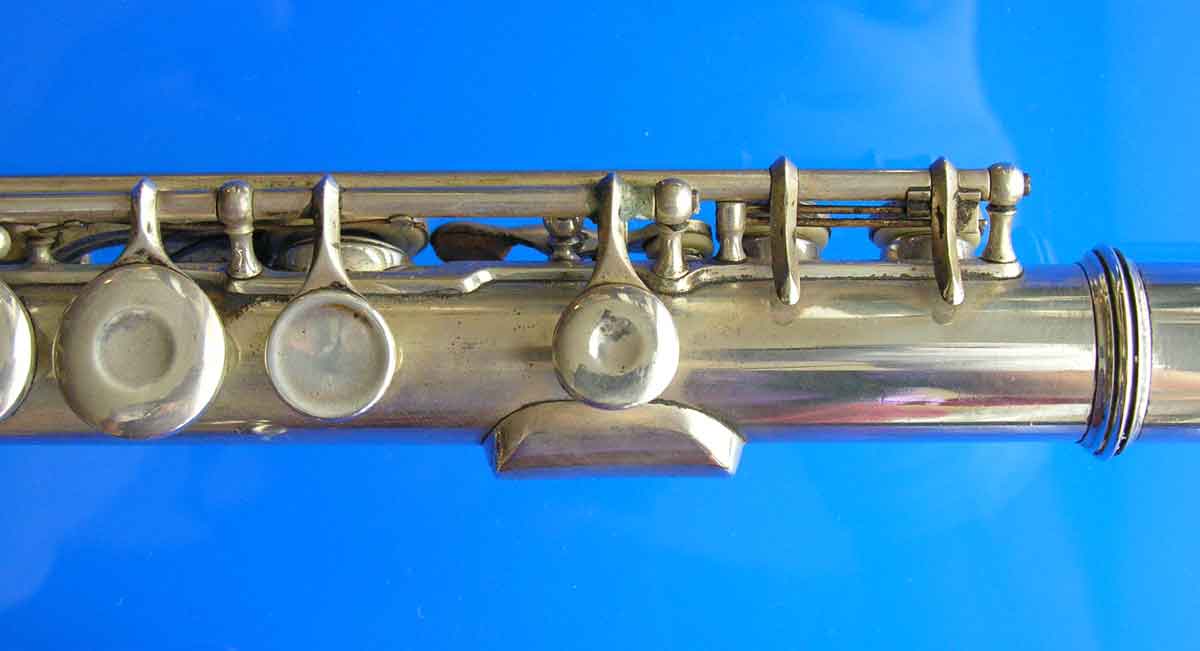 The top of the mechanism includes some wonderful curves on the strap, and Boehm's unique finger rest. 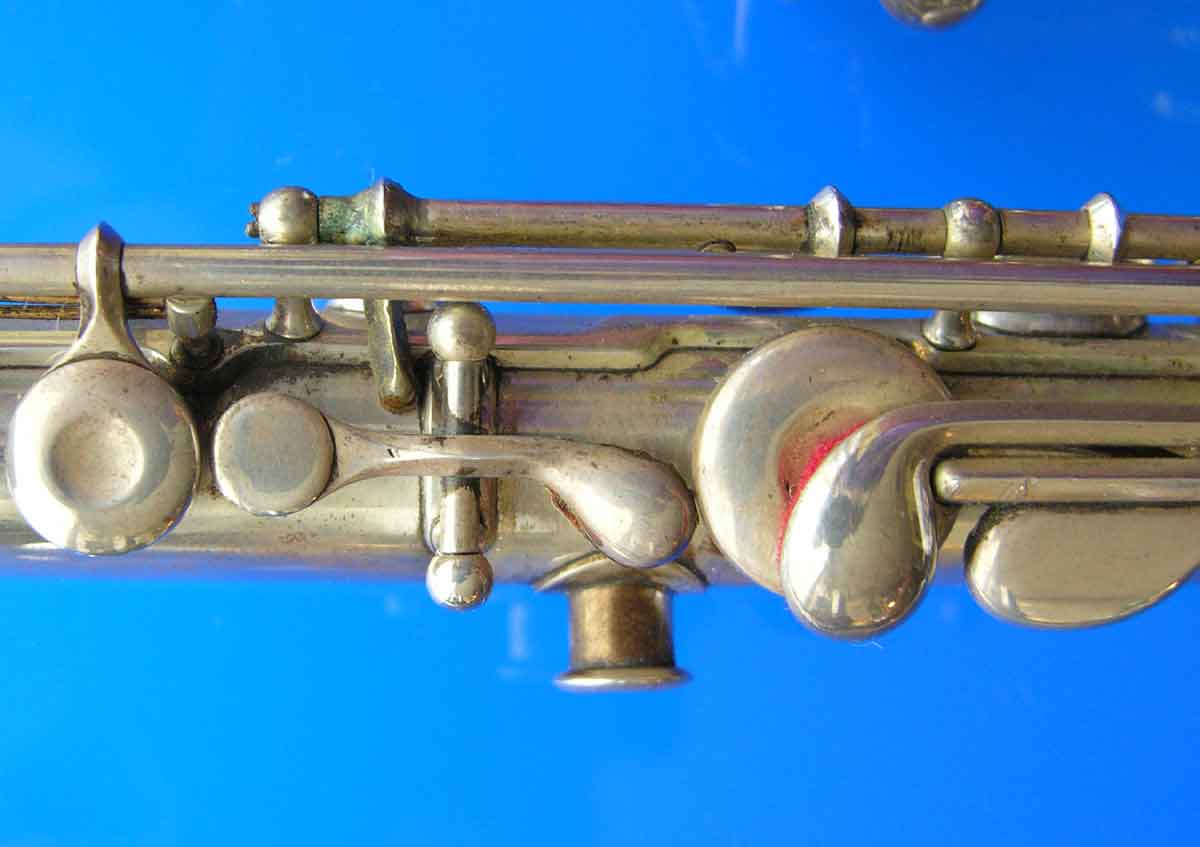 This photo is extremely rare. There cannot be more than a very few flutes in the world with Boehm's Schleif key, his crutch holder, and Louis Lot's thumb keys all in one spot. 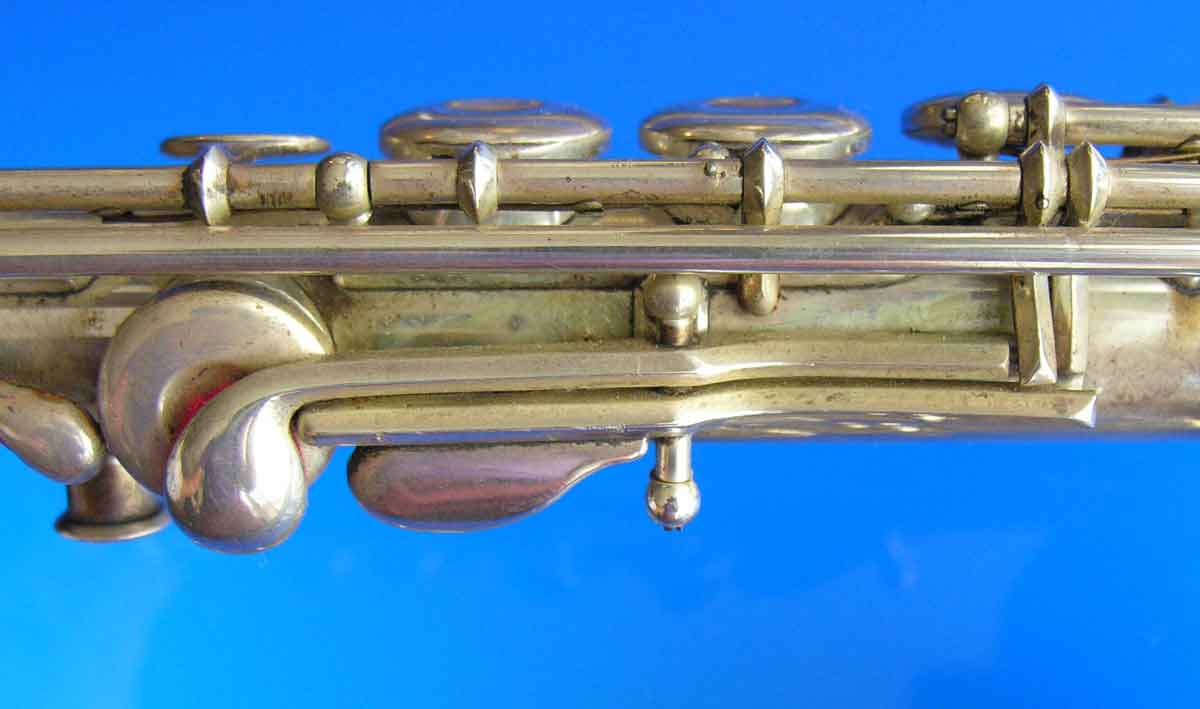 Here we see the whole of the French thumb, including the extended tail at the far right, giving a B trill instead of today's Bb. 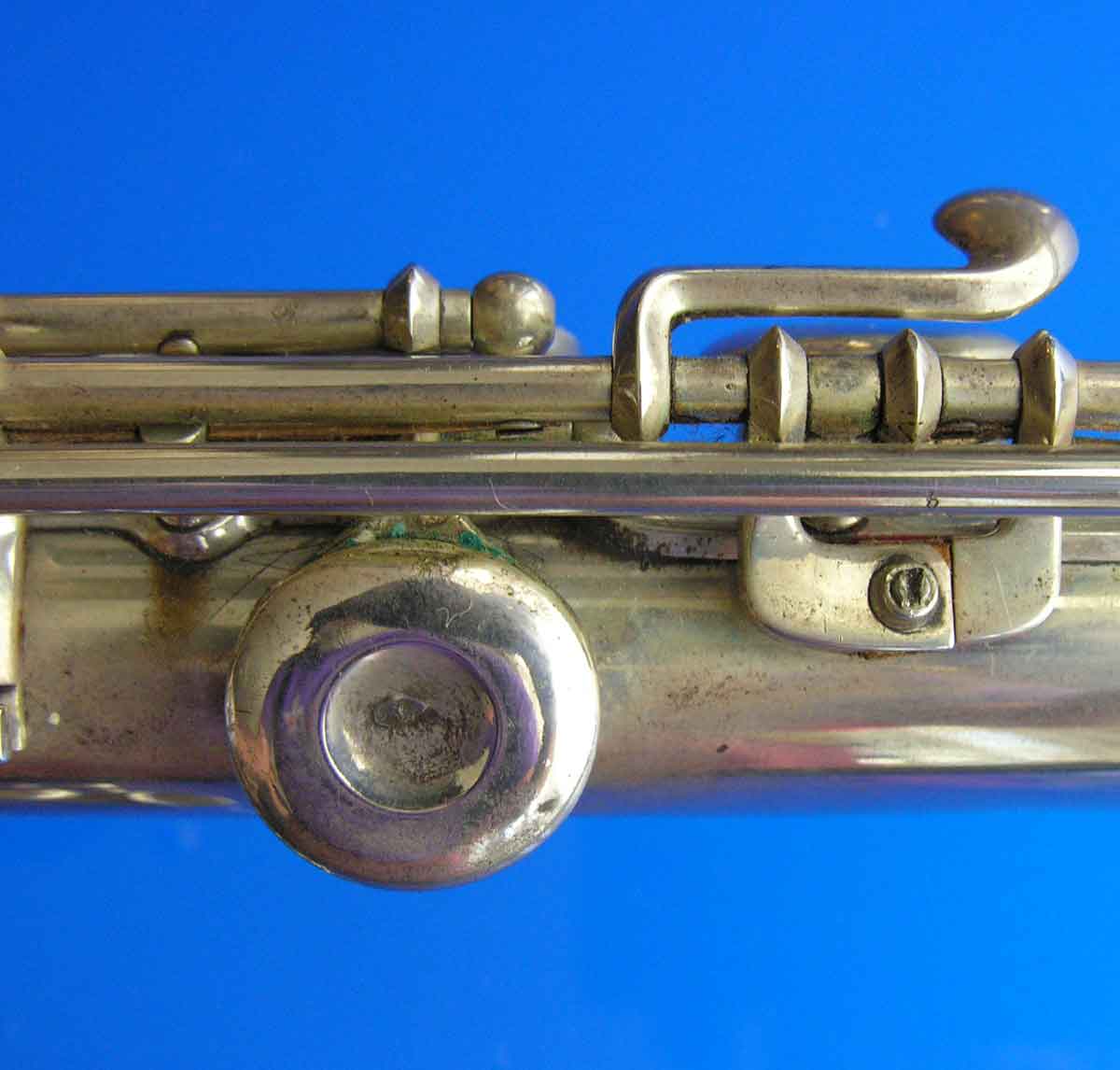 The side, independent, G# is very rare on these flutes, while the two-piece backclutch with adjusting screw is classic Mendler. 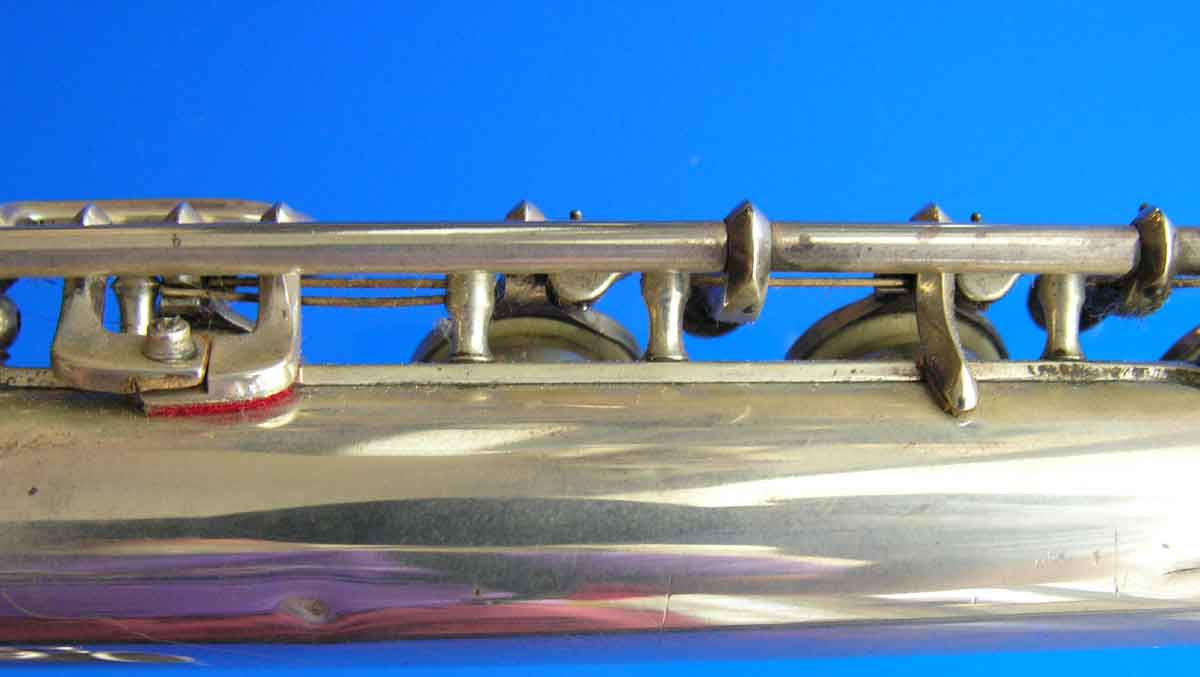 The rear view of the shoulder clutches shows the tasteful curve, while Mendler's spring posts are classically turned. 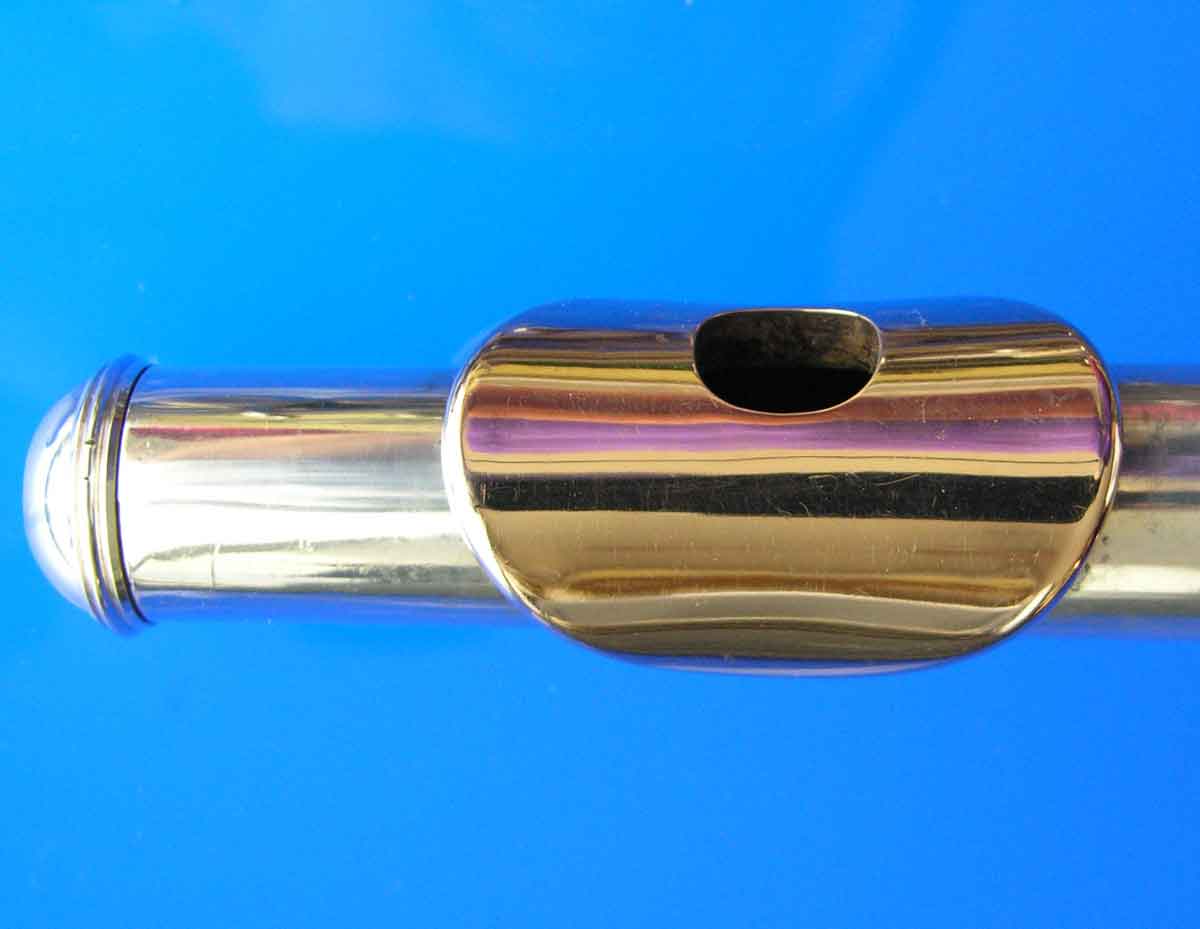 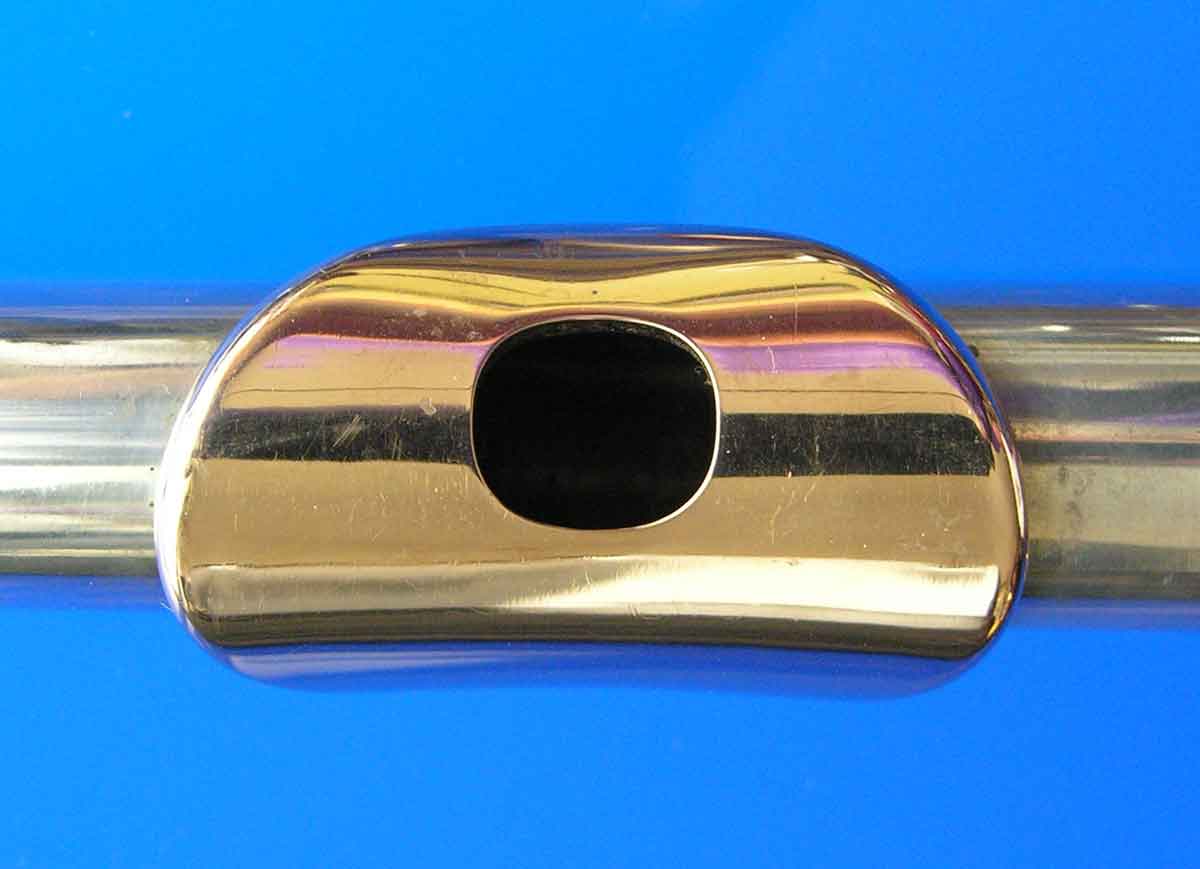 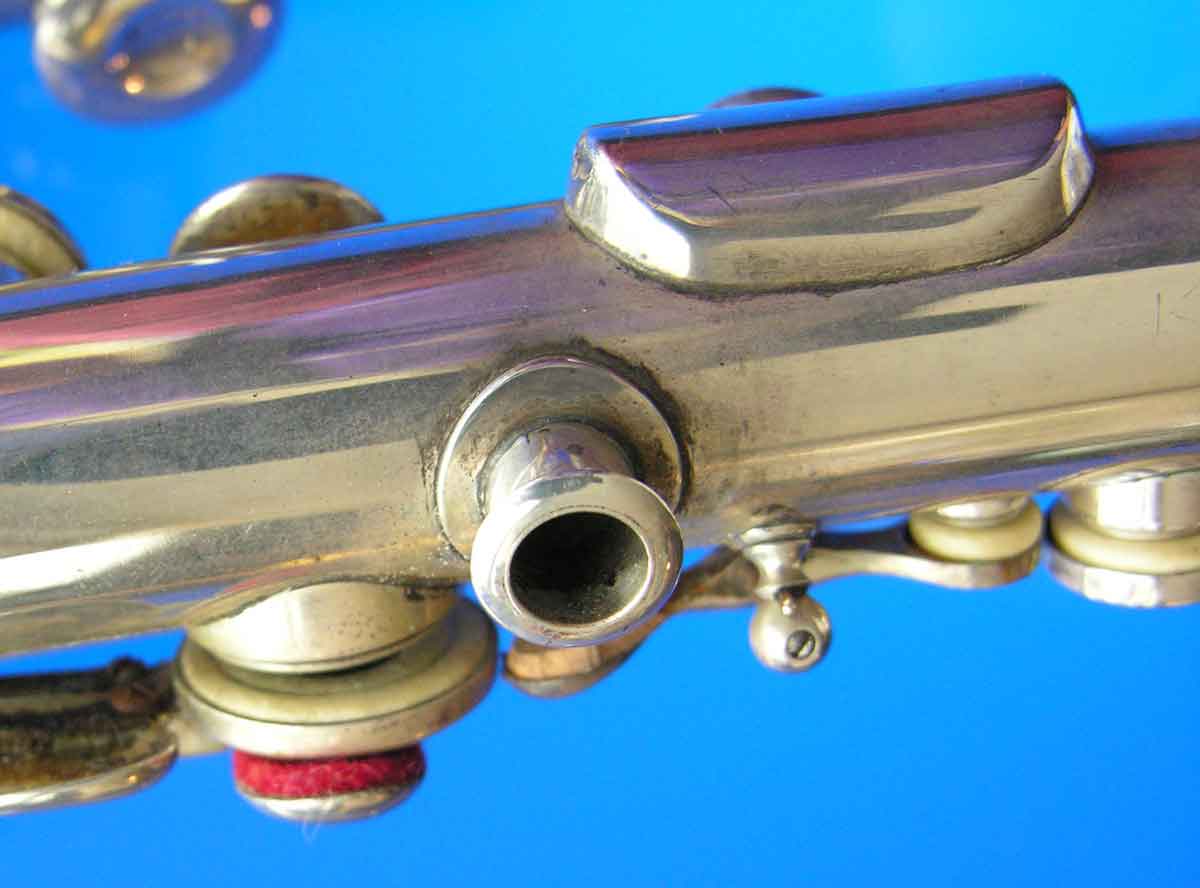 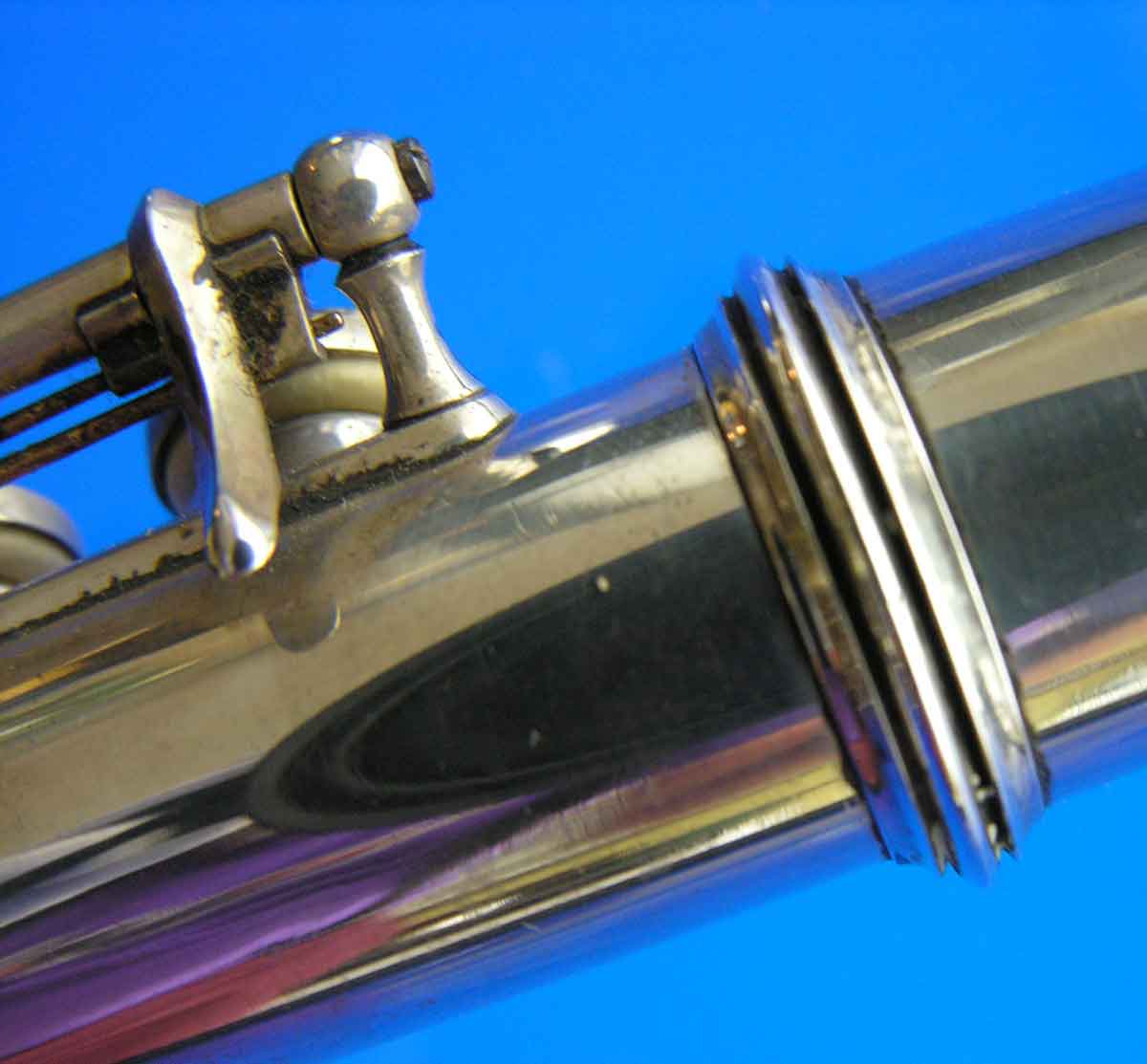 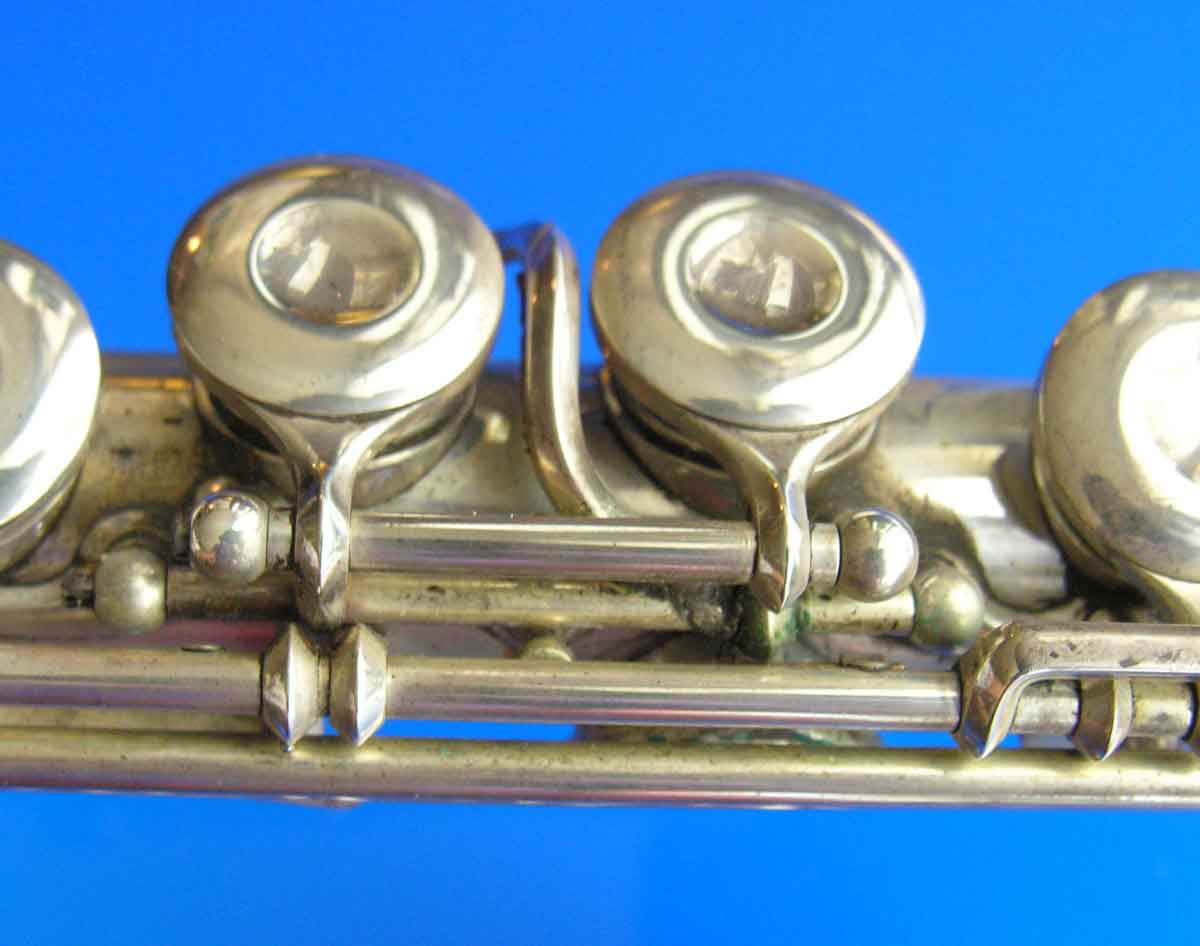 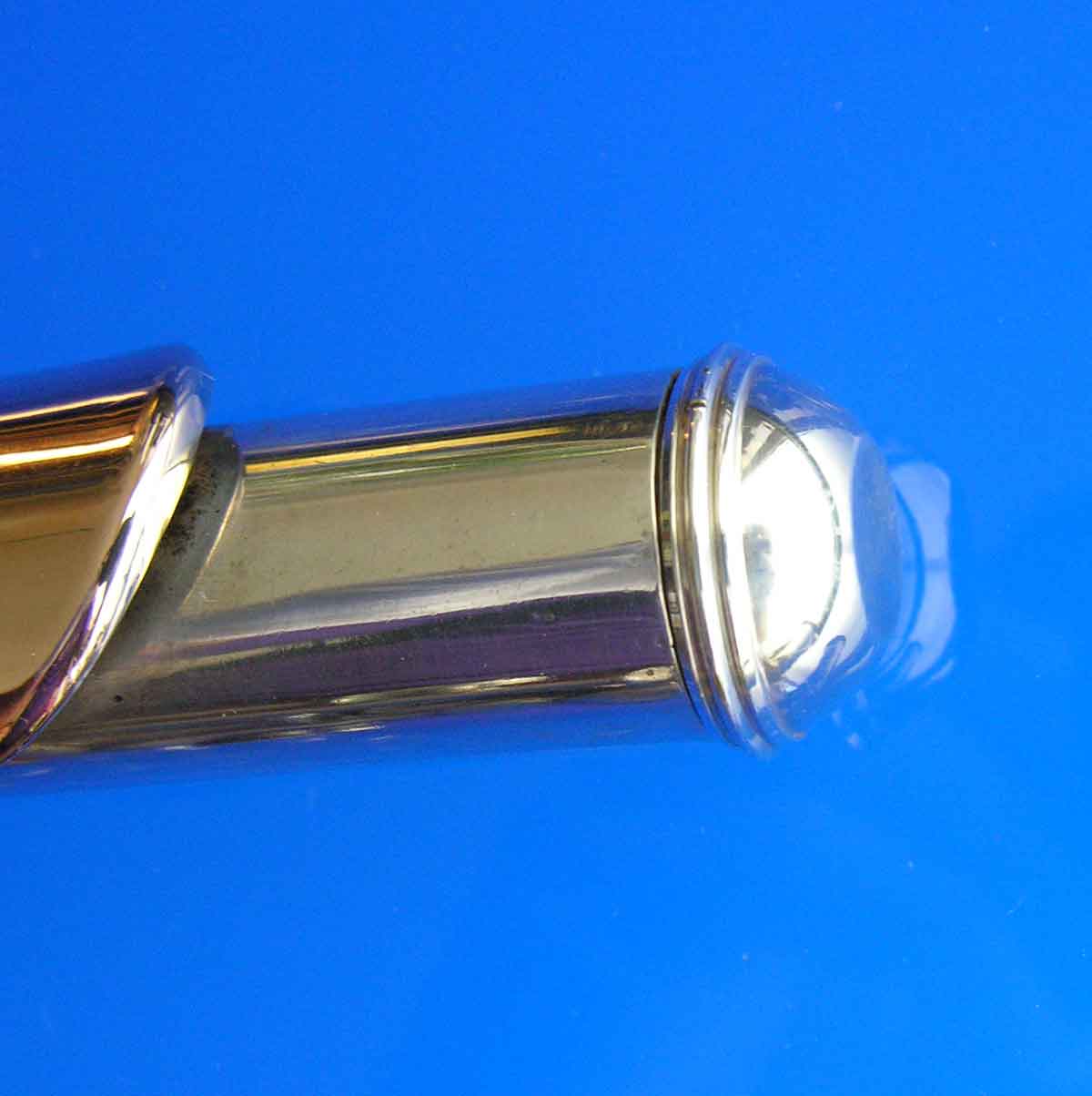 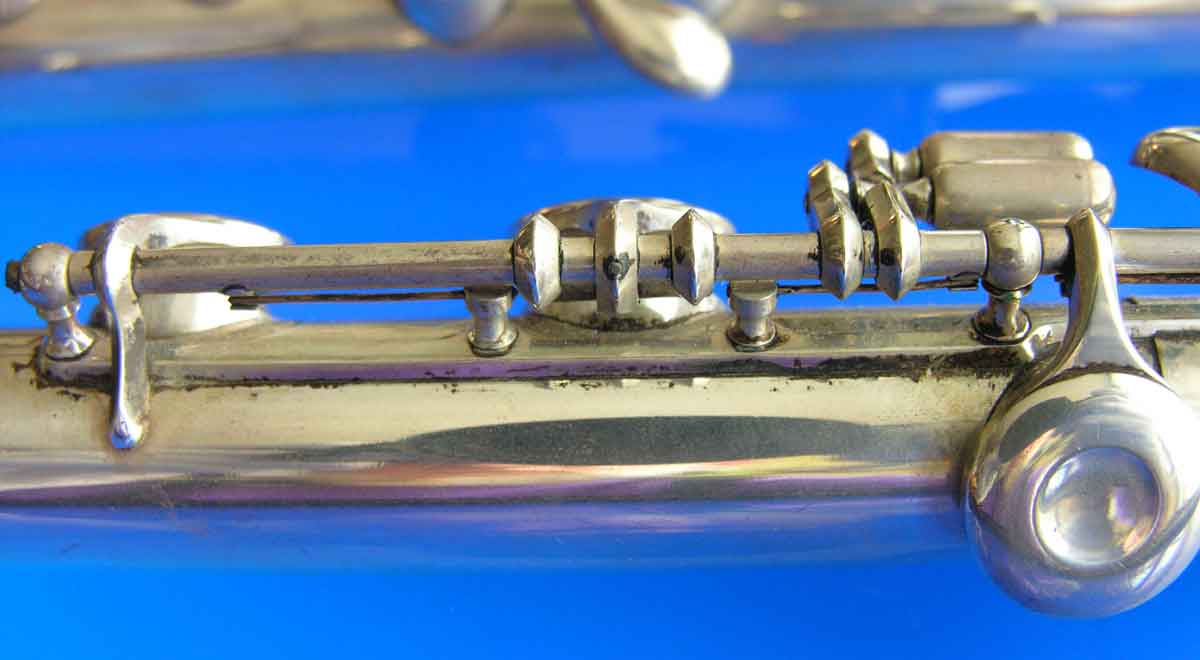