Stamp: Engraved on barrel: Th. Boehm & Mendler/ in/ M�nchen. No other part marked.

Marks: No marks visible under keys (flute not disassembled).

Manufacture Date: Probably made fairly late in the career of Carl Mendler Sr. The workmanship is exquisite, as only a master could do, yet some of the more outr� design features, which required extra work, have been softened. Shall we guess c.1875-1888?

Comments: Of all the beautiful workmanship on this flute, the only sign of inexperience is seen on the turned wooden threads on the cork-half of the corkscrew. These threads are chattered. The female threads in the crown are perfect. Furthermore, the silver tip is screwed onto a threaded steel rod, itself screwed into the top of the cork-screw. This arrangement is unique, and suggestive of later work. The cork-and-screw half is probably a replacement, which seems odd since the crown is apparently original. Dayton C. Miller's measurements of Boehm and Mendler flutes show that later flutes did not follow Boehm's description of the embouchure hole as having a 7 degree angle into the bore. Miller measures closer to a 90 degree angle. This lipplate has close to a 90 degree angle on the strike, but closer to 7 degrees at the inside edge, and somewhere inbetween on the sides. With one of Boehm's flutes in hand, it is useful and interesting to refer to Boehm's schema for placing the tone holes. Dayton C. Miller discusses this schema at length in his translation of Boehm's book, "The Flute and Flute Playing". Considering that the headjoint may have been shortened (actually the measurements show it clearly has not been), we took the measurements from the center of the C hole and placed the tone holes on the schema. The tone holes are mostly placed in the correct position for a pitch of 448, including the full sounding length. Exceptions are the Bb, F and E holes, which are all placed a few cents sharp, and the F# hole, which is very high, at the spot for an A=460 scale, but this is to offset the veiling of the closed hole below when fingering this note. Furthermore, the bottom of the flute is further from the C hole than the schema, but the low C# hole is not. Thus the distance from the C# hole to the bottom is longer than the other hole distances per half-step. Dayton C. Miller explains many of these anomalies, but I suspect that Boehm's schema is simply not that useful.

Material: This very beautiful flute is made of silver tubes and keys, gold springs, and a gold lipplate. The cork screw is of turned wood. The pad washers are Boehm's screw-and-washer type.

System: This flute has been built in Mendler's perfected style, which is largely taken from Lot and Godfroy, except for the graciously simple open G#, and the positioning of the Bb lever. Another Boehm and Mendler change in the Lotfroy system is the use of the two-piece backclutch. Cork screw a unique turned wood, with threaded steel rod inserted at the top, onto which is screwed the silver button which protrudes from the crown. I am suspecting that the cork end of this screw device is a replacement.

Condition: The crutch holder has been removed. Otherwise, this flute appears modestly used, and in perfect condition.

Pitch: Pitched at A=448, but playable quite a bit lower. A previous owner used it at A=440, judging by marks on the headjoint.

Case: In fairly new case, masterfully made by a now-retired (alas) Swiss casemaker. The case is based on the style of the original Boehm and Mendler cases. 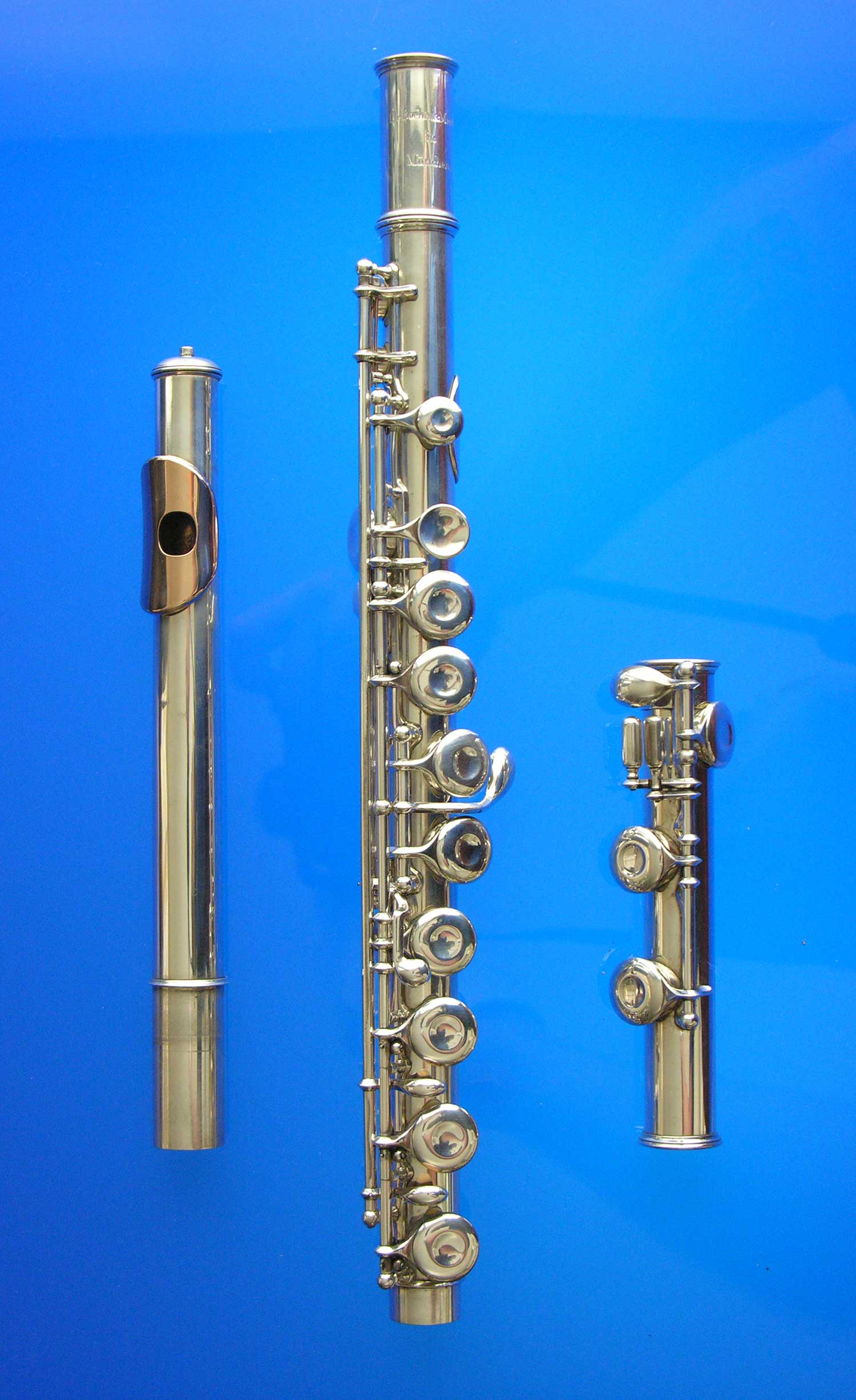 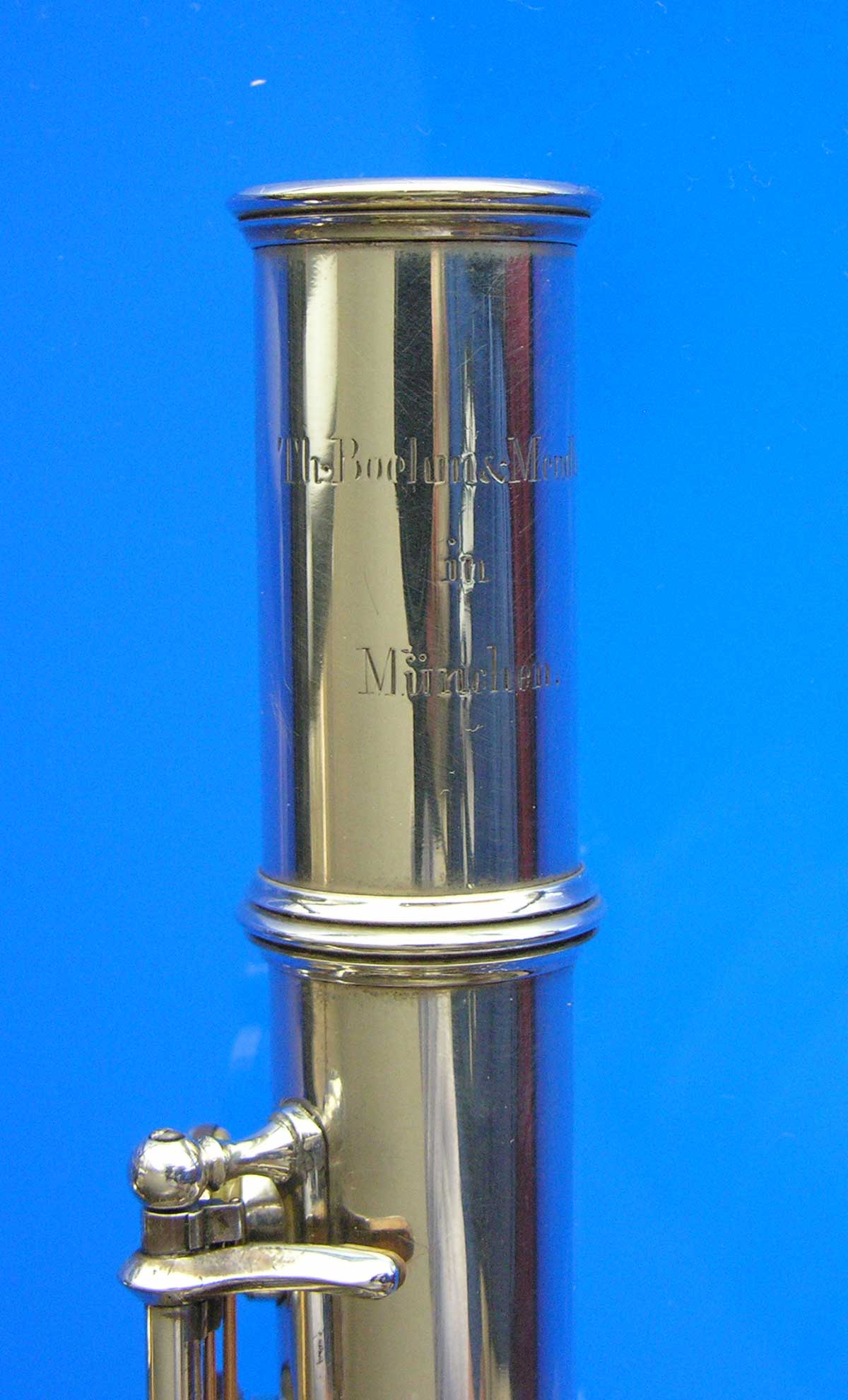 Boehm and Mendler flutes are always elegant in the extreme. Note the finely articulated rings, as well as the beautifully engraved name. 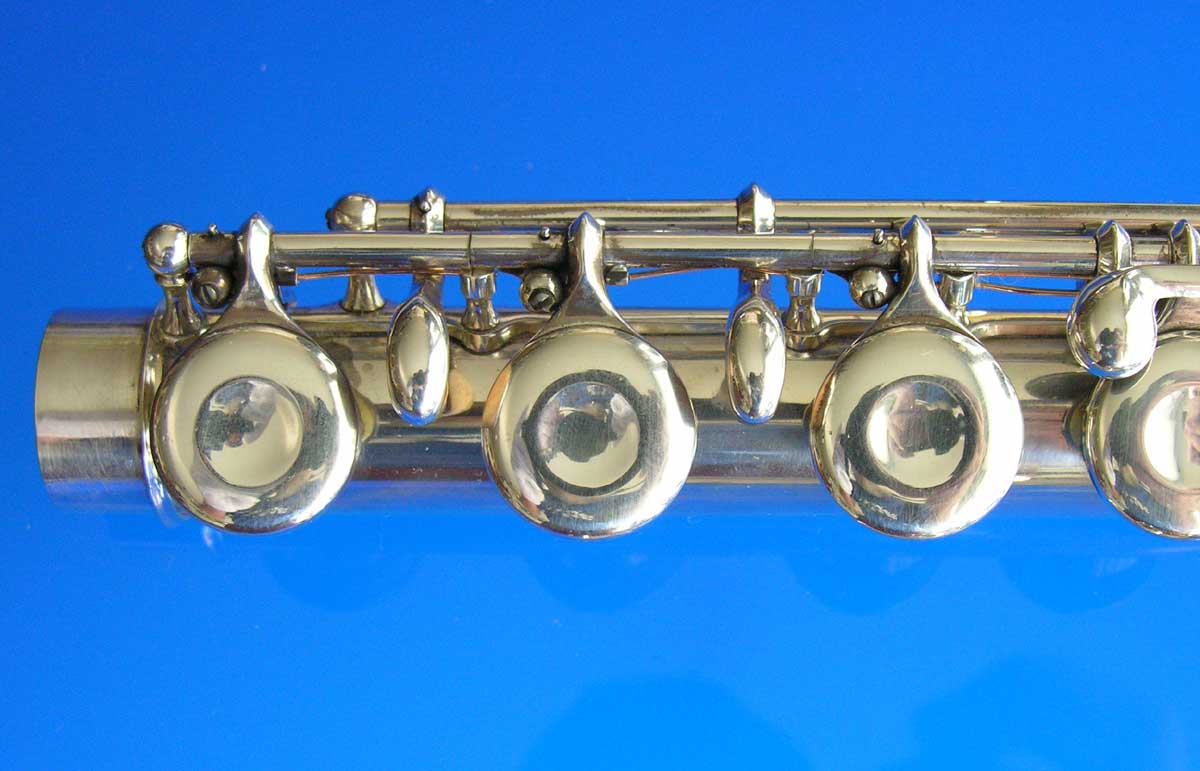 The right hand mechanism includes the shoulder clutches of Lot, yet Boehm and Mendler have added adjustment screws in little balls. 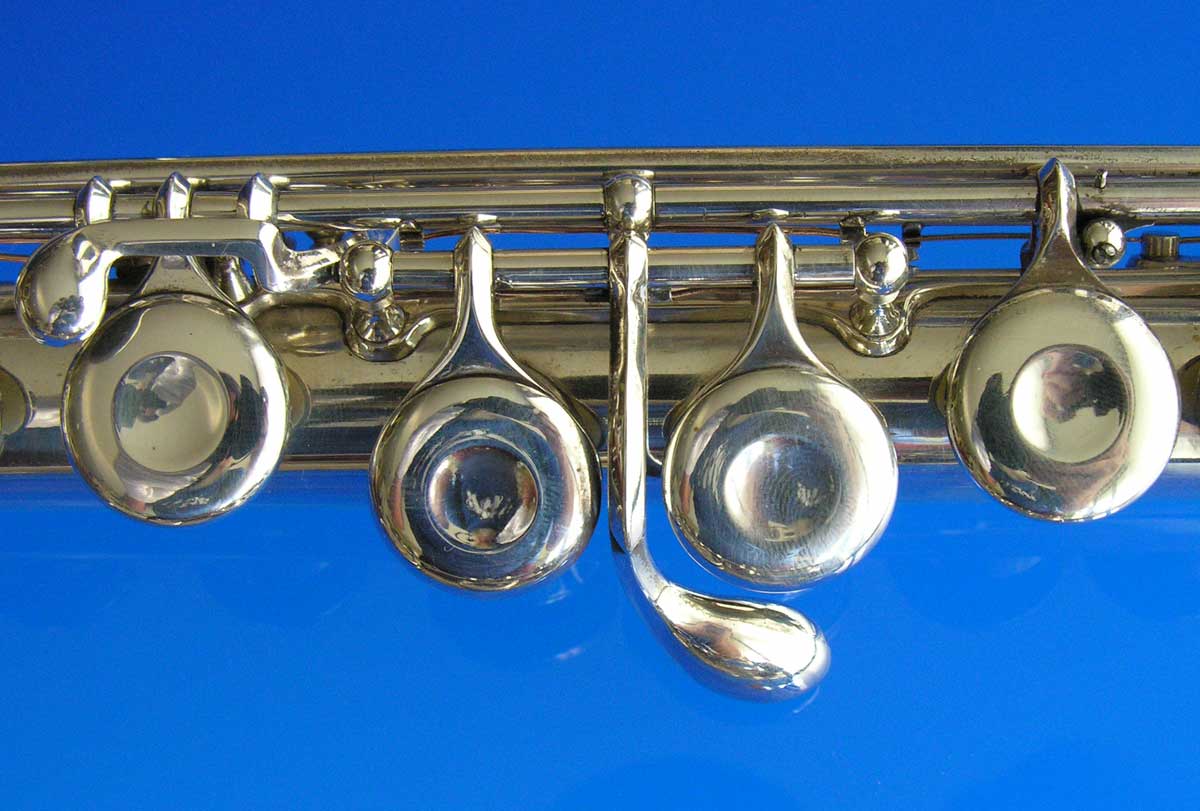 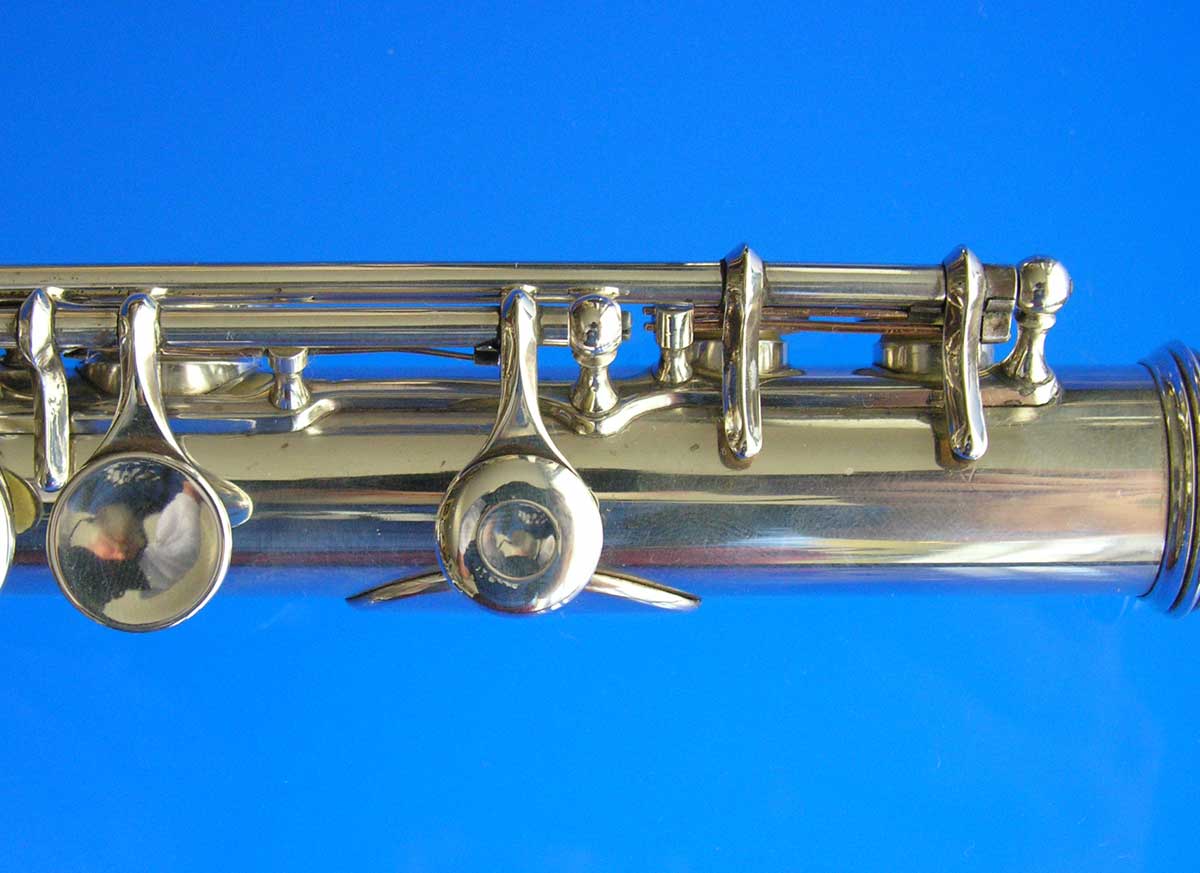 The top of the mechanism shows a diminutive side lump for hand control (these were usually much larger), and the exquisitely sinuous strap, which curves down to include the trill keys, � la Lot. 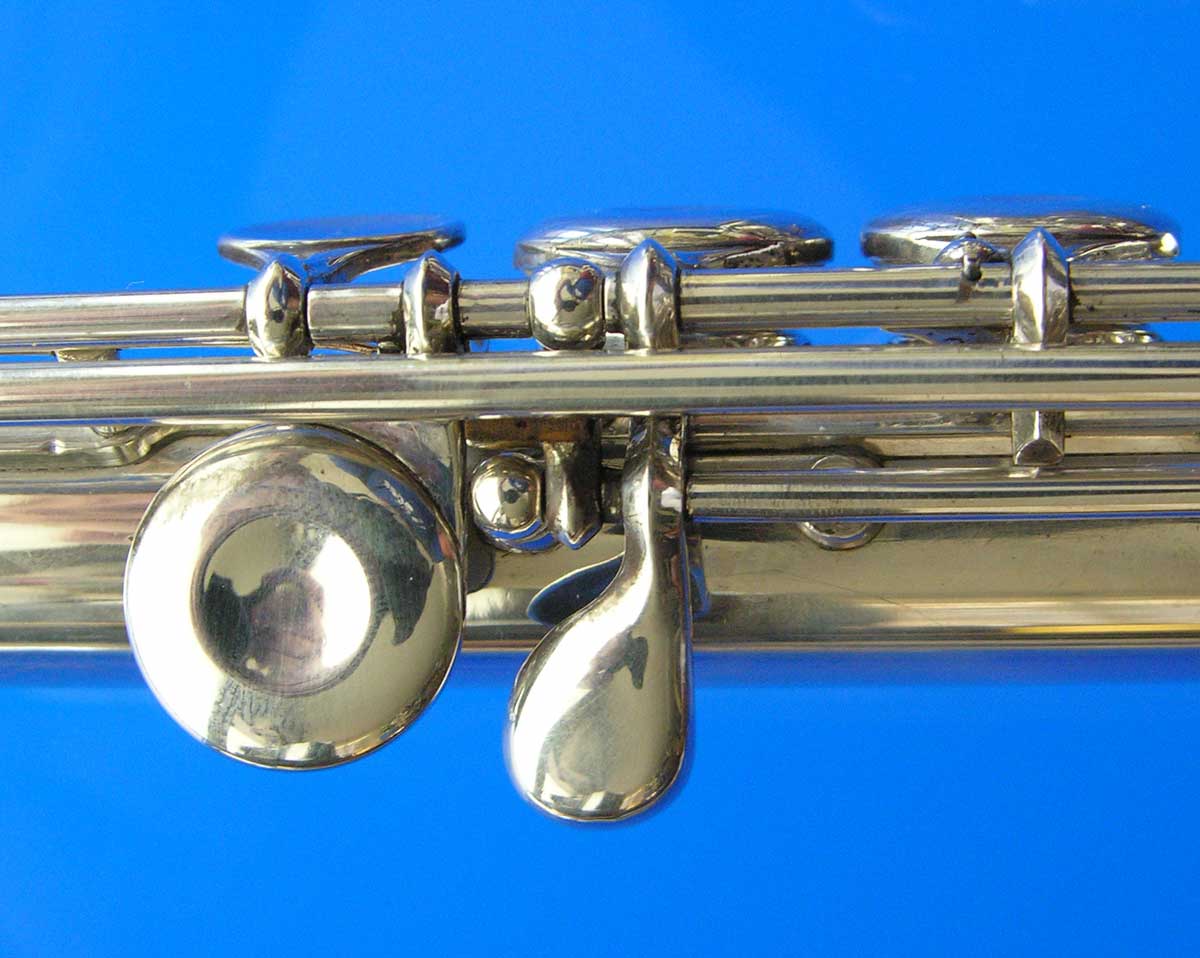 Boehm's thumb keys were unique. The hanging touch is for the Bb, and closes the key directly above. The rod from the right is for trilling the thumb key. 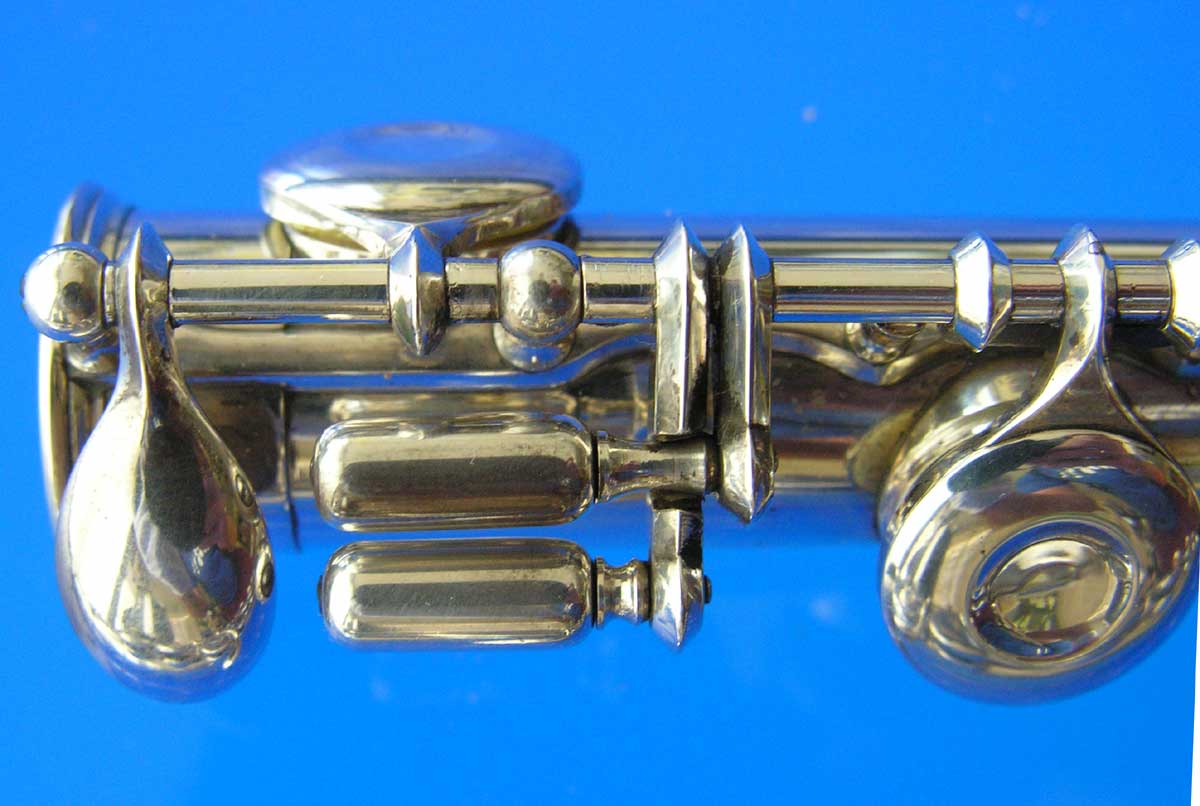 Boehm's footjoint is based on Lot's version of his earlier foot, and uses two rollers. This, too, was copied by the American makers. 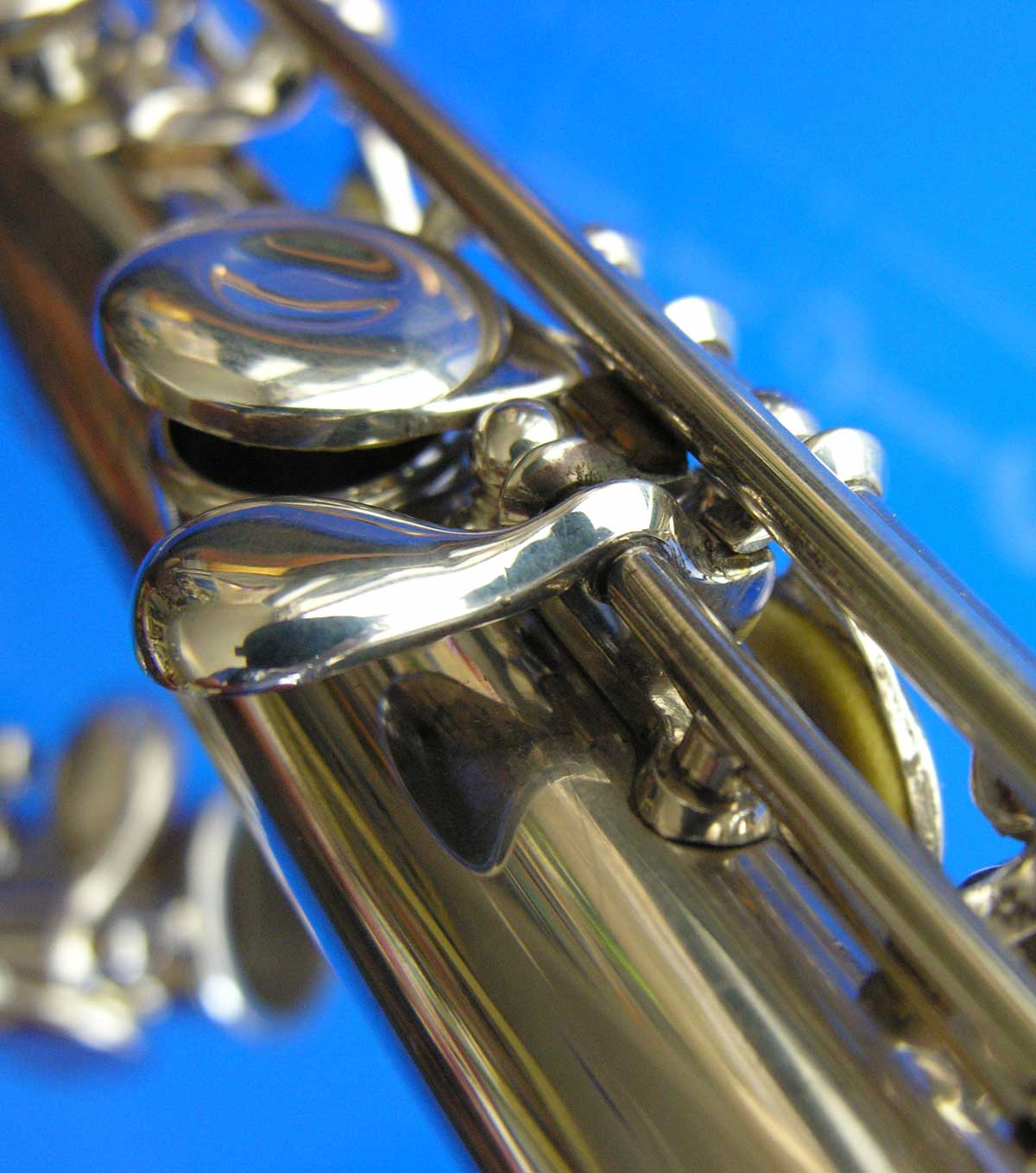 Here we are peeking under the Bb clutch to see the overlapping, opposing-arc tails. 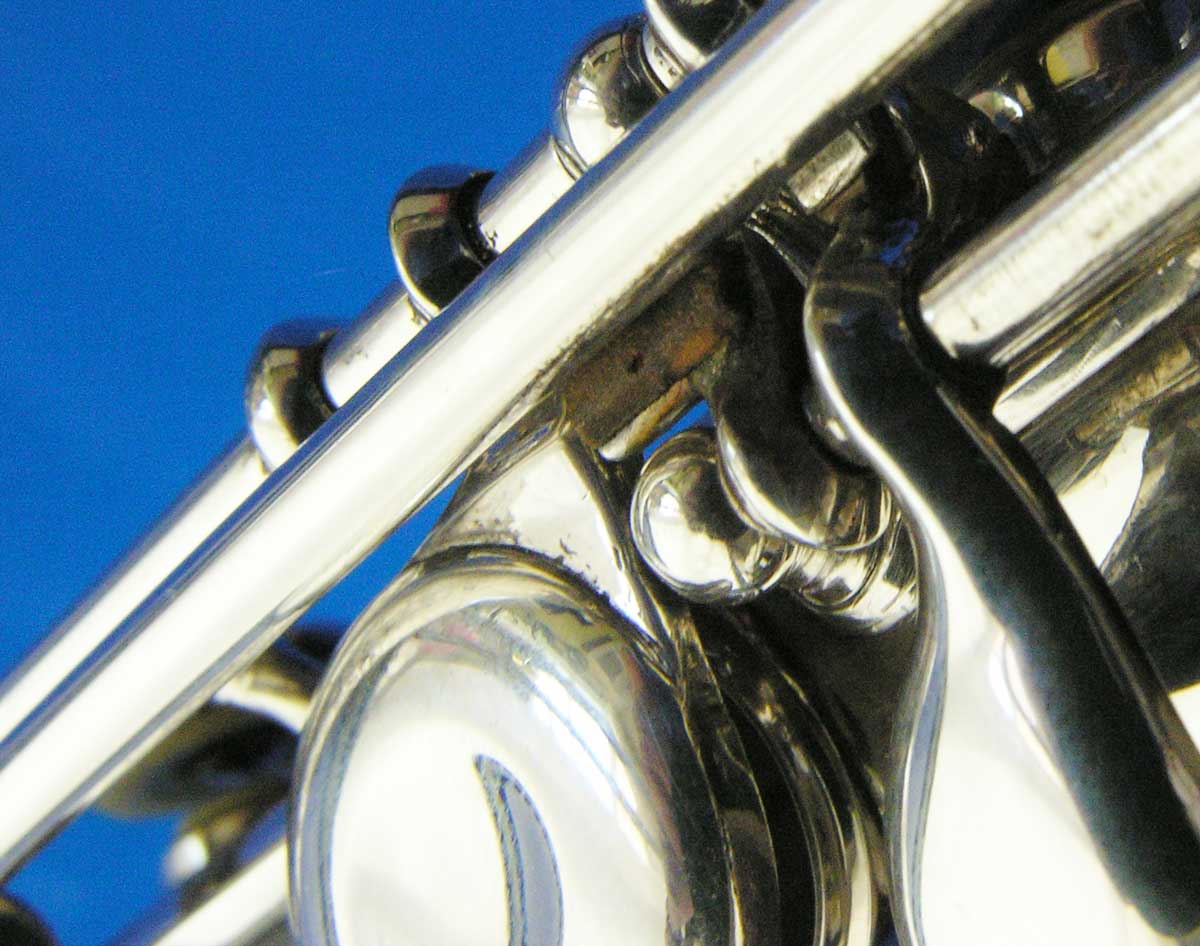 This view attempts to see the little pin, an aesthetic anomaly, which trills the thumb B. 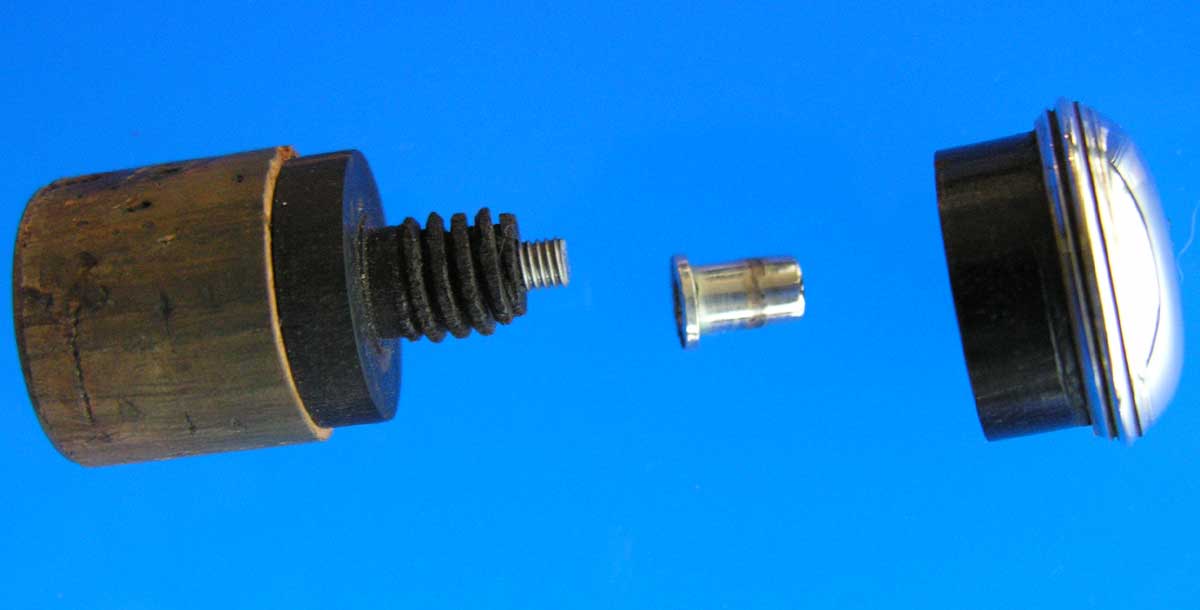 The crown seems lovely, but the screw-on silver tip and the heavily chattered threads on the male corkscrew suggest the cork end is new. 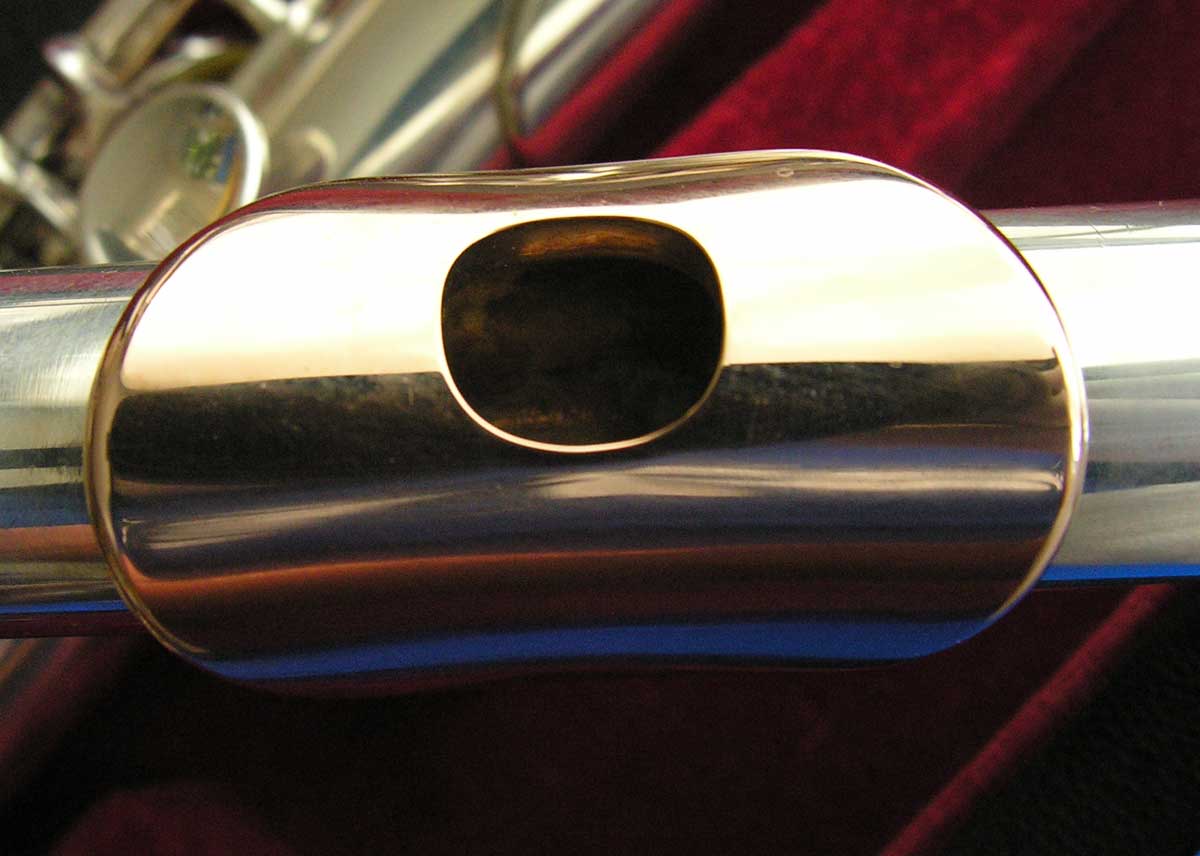 Boehm's beautiful gold lipplate. Typically for Boehm, the leading wall is close to 90 degrees, while the inside wall is angled, almost to Lot's 7 degrees. The sides are in between. 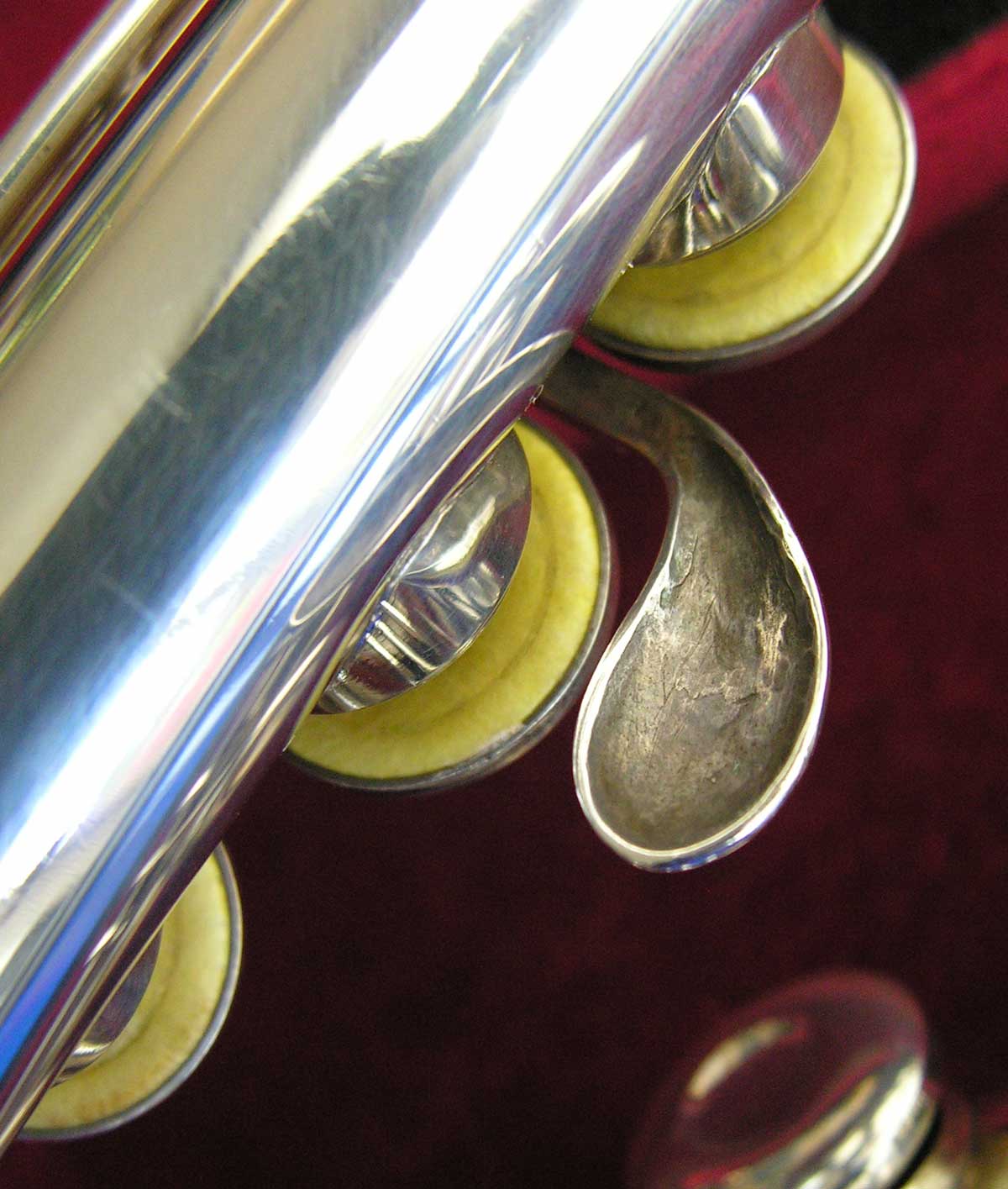 Mendler always dug out the undersides of the touches. Dayton C. Miller supposed this was for weight reduction. 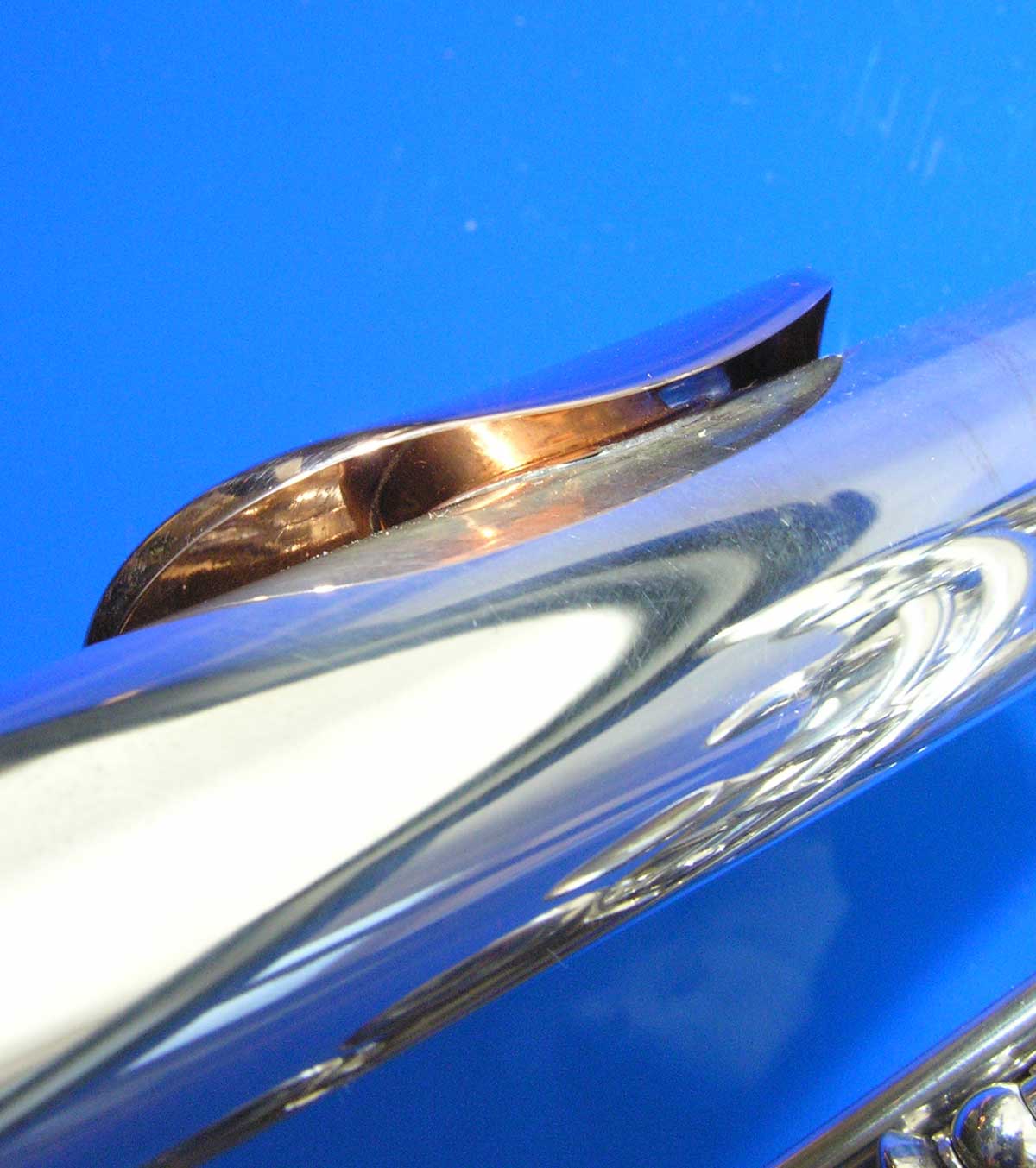 The golden chimney. Mendler was the finest finisher of all flutemakers. 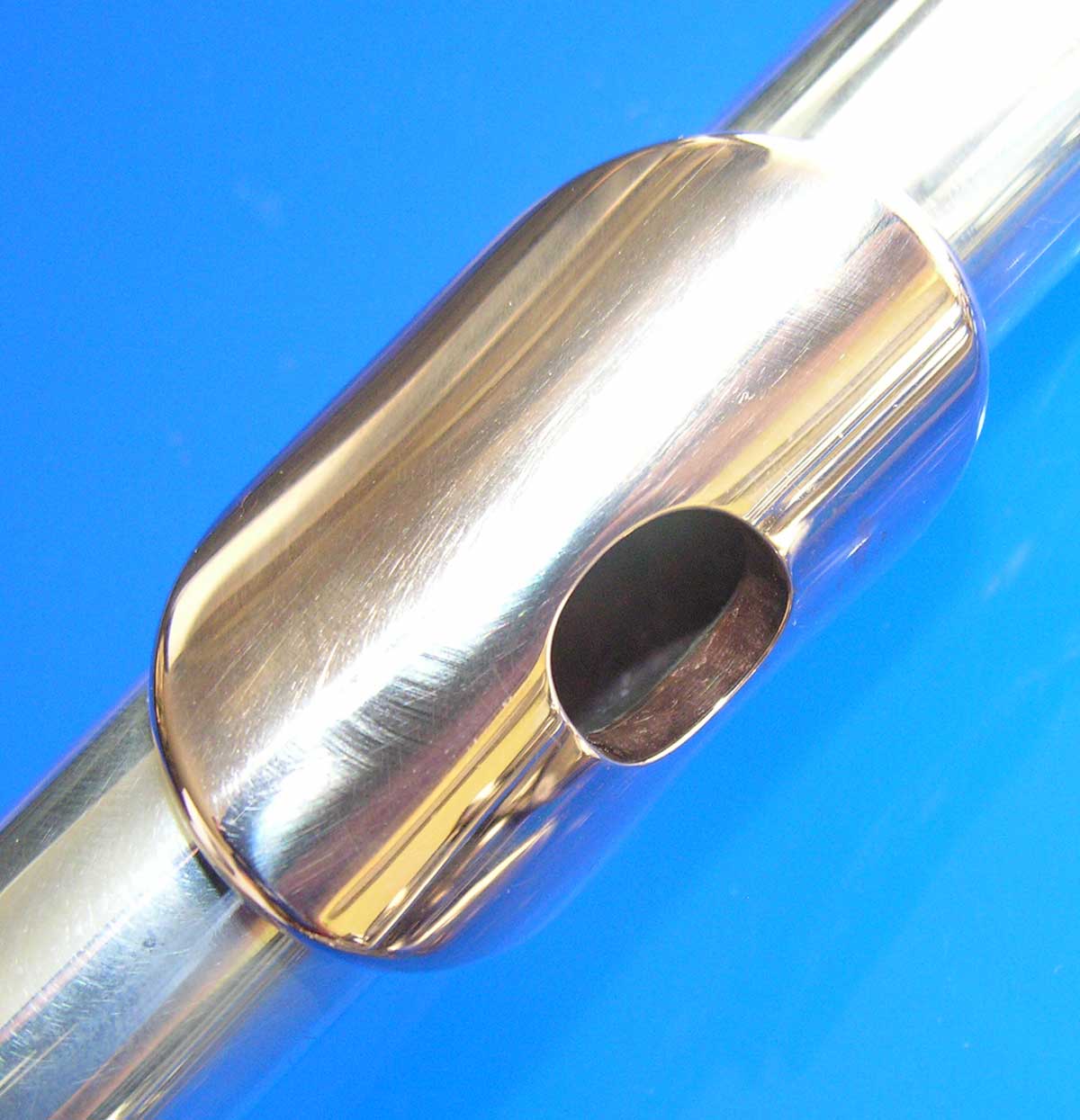 The leading edge of the embouchure. 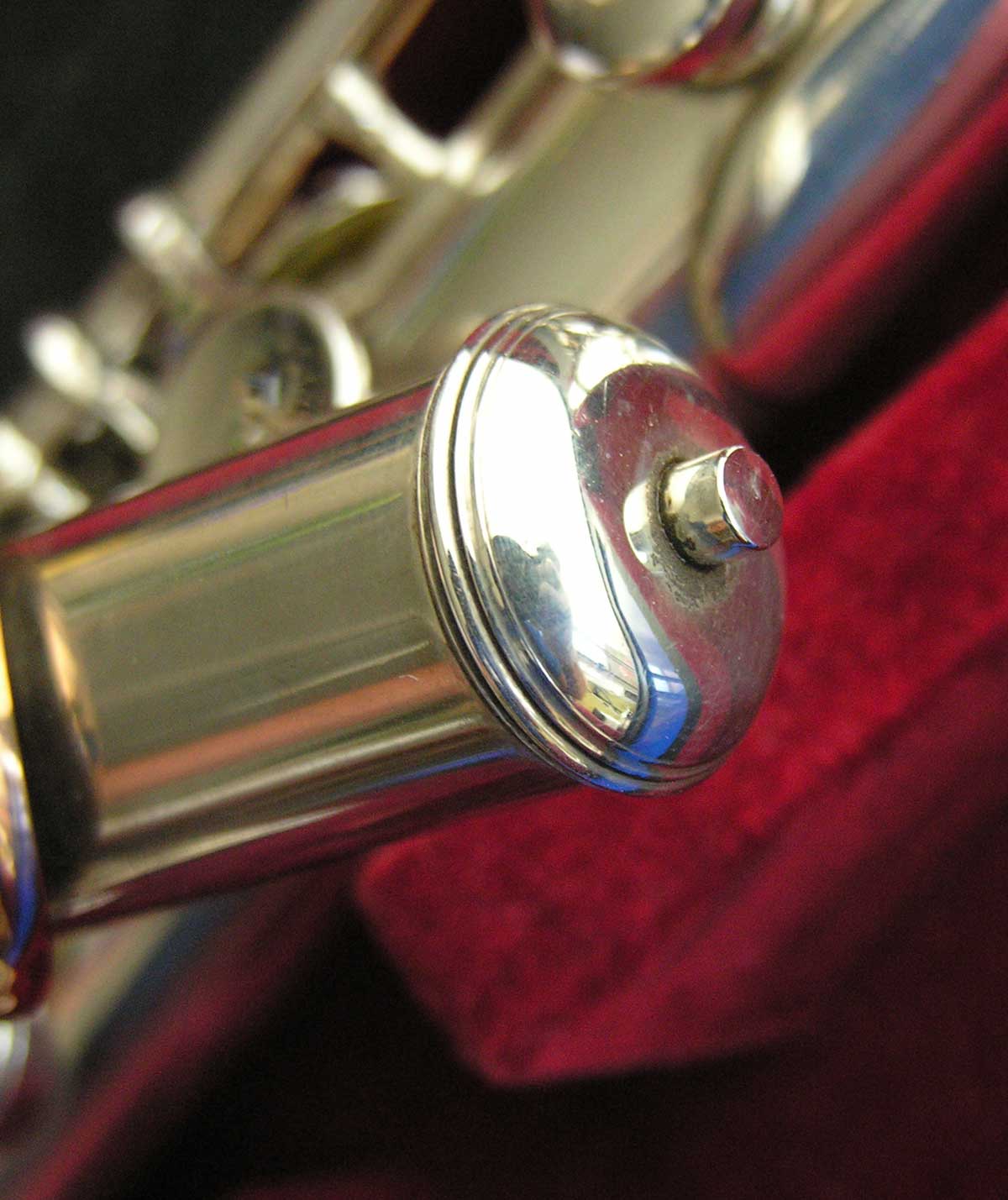 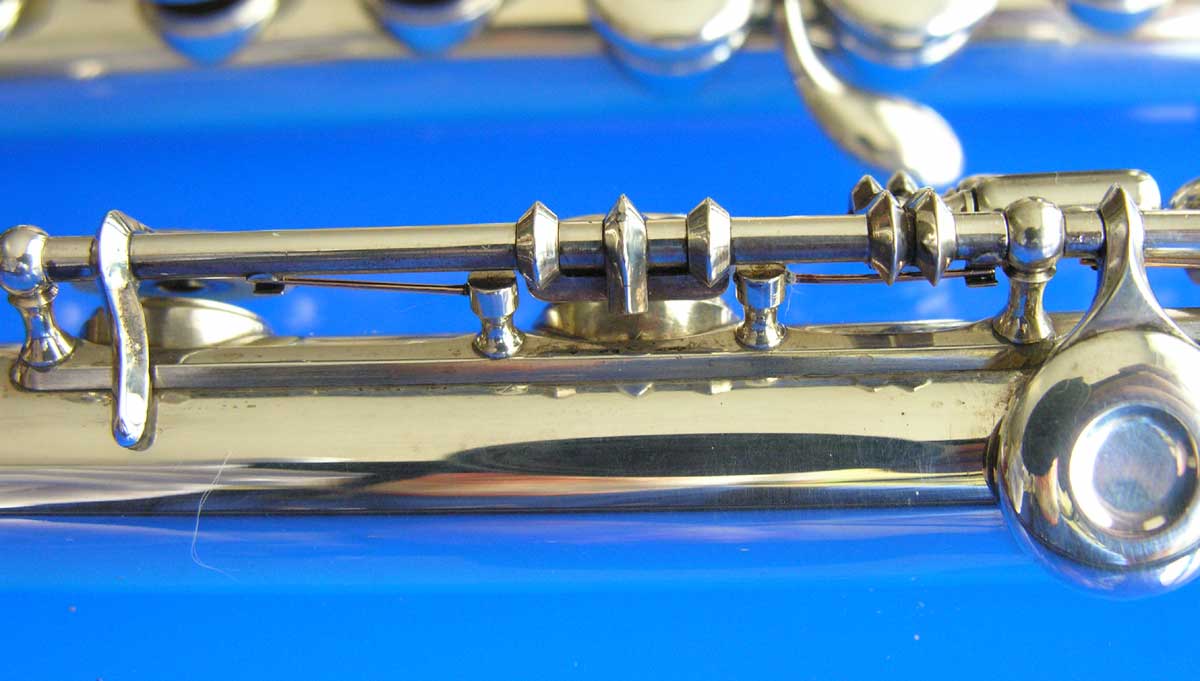 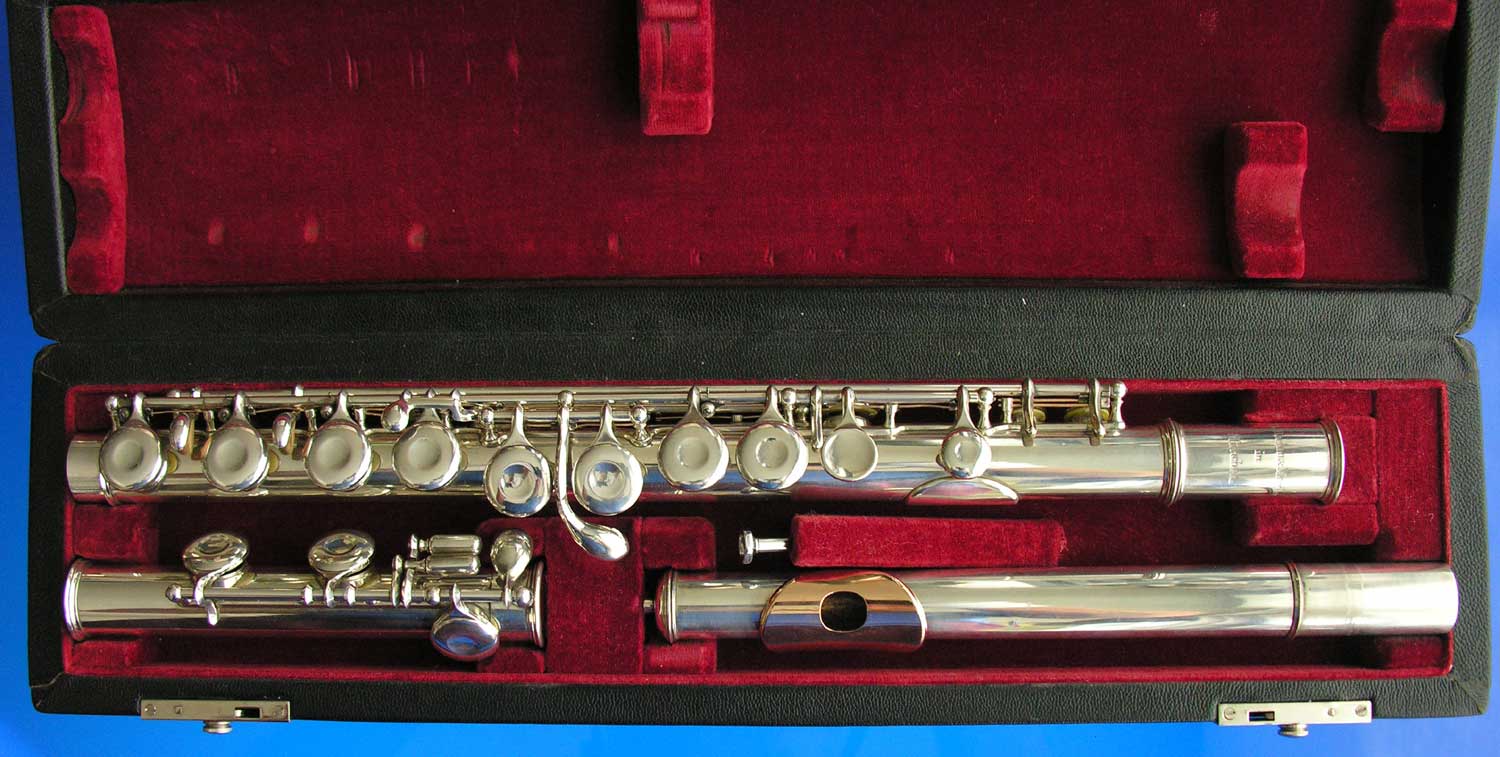 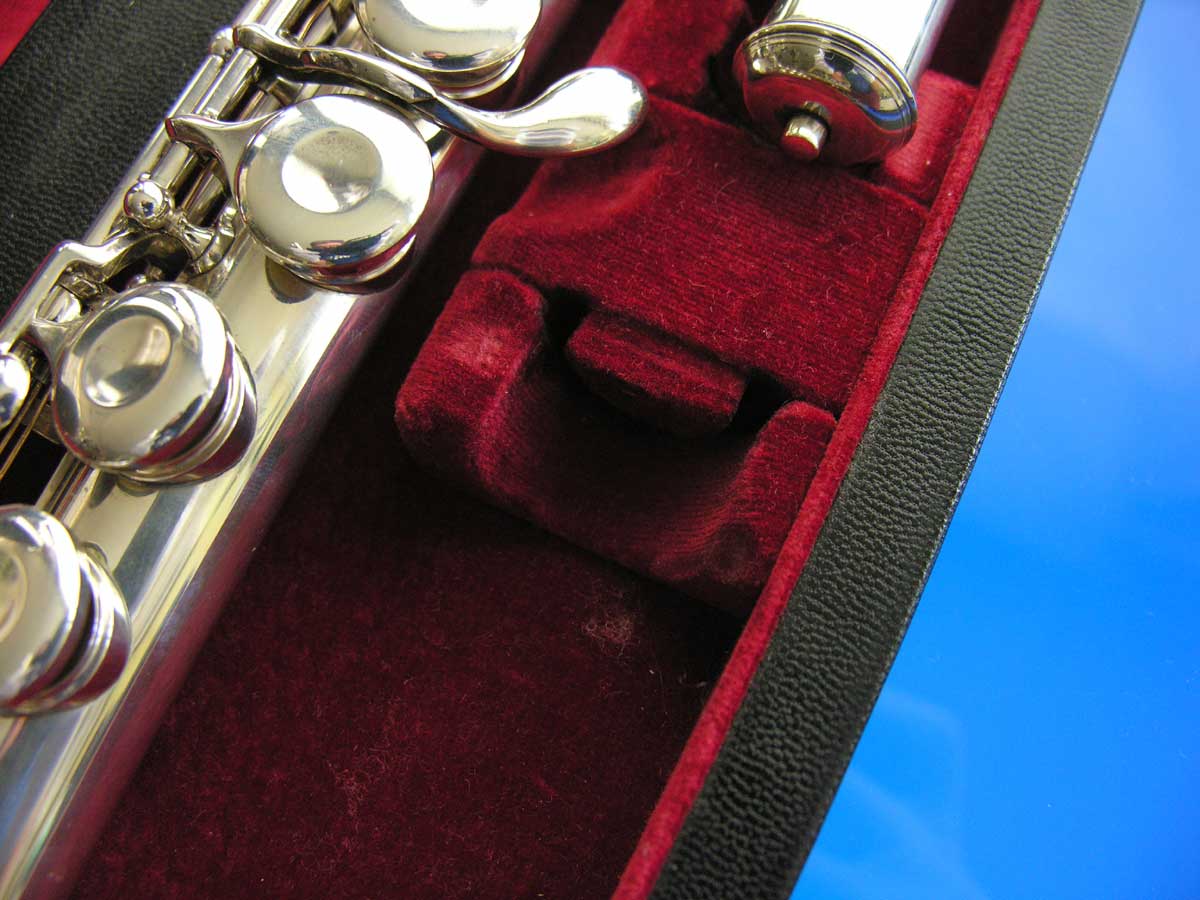 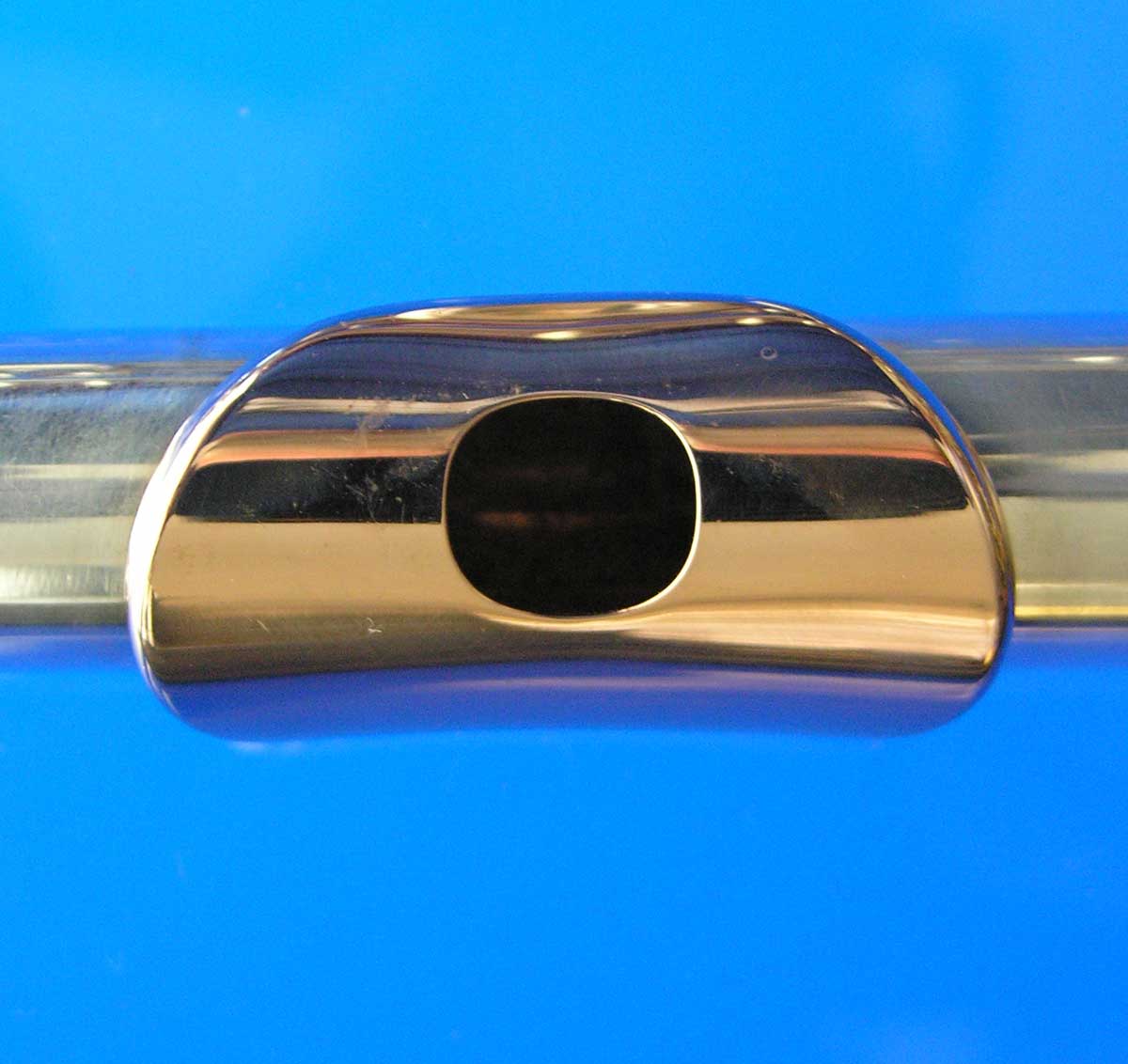 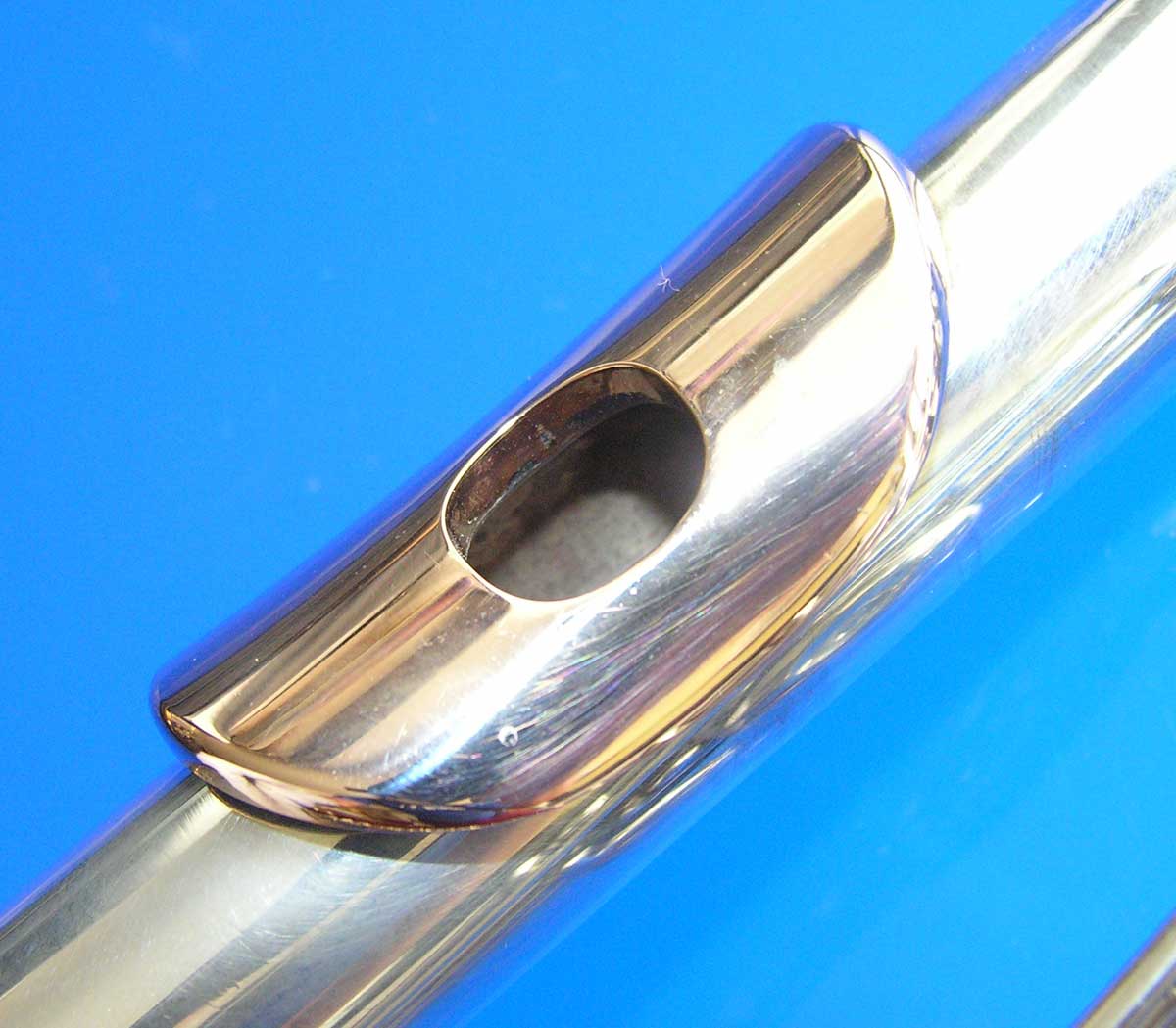