Manufacture Date: Made for Petiton of Paris (possibly for delivery to Ledoussal � Brest ) May 15, 1858. (Louis Lot record book).

Comments: This beautiful instrument displays the absolute simplicity of the Louis Lot flute. Mark Twain once apologized for writing such a long letter, but he simply did not have enough time to write a shorter one. This flute proves Mark Twain's point. It took absolute genius to render Theobald Boehm's lengthy ideas into the perfect simplicity of this flute. The original record exists for this flute, and reads: "15 Mai 1858. Doit Petiton � Paris Une flute Cylindrique, tubes et cles en argent descendant � l'ut, avec boite velour bleu, No.(281)................365""." Thus we have here a flute of silver with a C foot, in a case with blue velour interieur, evidently ordered by (Doit=ordered on account) Petiton (little tone) of Paris, at the instructor's discount price of 365 francs, when the list price for Lot's model 5 was 500 francs. Indeed, one suspects that Petiton was an instructor since, on 19 August, he pays for this flute, "pour Ledoussal". The entry reads: "19 Aout 1858. Avoir Petiton � Paris pour Ledoussal Un bon sur Ledoussal � Brest valeur pour solde...........365." Of Petiton and Ledousal we know naught. Today, the case for this flute, which may be original, is stamped in gold on the top, "A. GELLE". From Gelle, the instrument made its way to Mr. Vito Pascucci, former owner of the G. Leblanc Corporation. Prior to and just after Vito's retirement, many instruments were discarded or donated to needy students. This flute was among the instruments to be discarded. The current owner rescued it from the dumpster and was given permission to keep it. There is a God after all, and she works in mysterious ways! This instrument weighs much less than any other flute we have weighed. At 322 grams (11.5 oz), it is 22 grams less than #1551, and 45 grams lighter than #742. The silver tubes are very thin. The headjoint is between 9-10 thousands of an inch, and the body about 13 thousands. We fully expect this instrument to exemplify the beautiful and rich tones for which Louis Lot has long been famous. This flute, Louis Lot's 40th silver flute, would have been made for players and audiences more used to the old wooden sound. We expect this light flute to be bright and lively, yet rich of tone.

Material: Made of silver, with silver lipplate. Steel springs. Gilt pad washers. Open hole grommets appear replaced with later Lot grommets, or they were made with an unusually large overhang into the open hole. Cork screw of turned wood with silver cap.

System: This is Louis Lot's model 5, silver flute with C foot. Trill to the thumb B key. Dorus G#.

Condition: This flute is extraordinarily well preserved. Absolutely no signs of damage or abuse exist on the body and foot, except the current replacement of the open hole grommets with unsightly and oversized un-gilt ones (Paul Rabinov thinks they are Lot grommets, nonetheless). The headjoint, on the other hand, has received some hard knocks. The seam just above the lipplate had opened, and is repaired with a silver strip. The lipplate was resoldered, with a touch of solder dripping into the bore on the player's side. Rabinov suggests that the head may have been dropped (or hit), depressing the tube at the lipplate. The repair was neatened up by massive buffing. The buffing has softened the edges of the lipplate, making it look unfamiliar. The obvious resoldering and buffing of the lip invites very close inspection of the lipplate for originality. Early Lot lipplates seem not to be like the later plates. The flange is smaller on the tube, for one. The actual shape of the plate does not seem to have been standardized. Thus it is hard to identify the plate via outside measurements. Nonetheless, the opening measurement at least must reflect Lot's taste at the time. This embouchure, at 10.2 x 11 .75 mm, is very similar to the opening of Lot #408, which we measured at 10.21 x 11.78. Another spot deserving attention is the merging of the lipplate with the flute tube. In this case the lipplate absolutely fits the hole in the tube. It is possible that the tube may have been shaped to fit the lipplate, but the presence of a blob of solder on the player's side strongly suggests that the solder job was not followed up with a cutting tool to neaten up the tube. A solder line at the joint of the chimney and the tube is either unfinished work, like the blob, or fill where the headjoint tube is slightly out of round, Rabinov suggests. Interestingly, the chimney height at 4.7 mm. is low; between the very low chimney of a Boehm and Mendler here now (4.2 mm) and Lot #1584 (5.1 mm.) also here. Thus we cannot find major fault with this plate, just a little surprise at it's appearance, which might be explained by the buffing. Paul Rabinov suggested calling this "quite possibly the original plate". A strong line on the headjoint 26.5 mm up from the bottom is neither a ring line, nor sign of a soldered-on extension (in spite of part of the line being visible inside the head). Perhaps the flute was put together when it was whacked, and this mark remains. Incidentally, the top ring on the barrel is turned over, so the ornamented bottom looks like what should be the headjoint ring.

Pitch: We have graphed the tone hole placement from this flute onto Boehm's schema. As far as I can tell (and I find the schema confusing), this flute was made at A=448, just as one might expect. The headjoint has been cut an extra 3 mm.

Sounding Length: Current sounding length is 586 mm. with the headjoint all the way in.

Case: The case may very well be original, although the gold stamped name "A. GELLE", and certainly the ridiculous strap lock, appear later. The flute fits perfectly in the case. 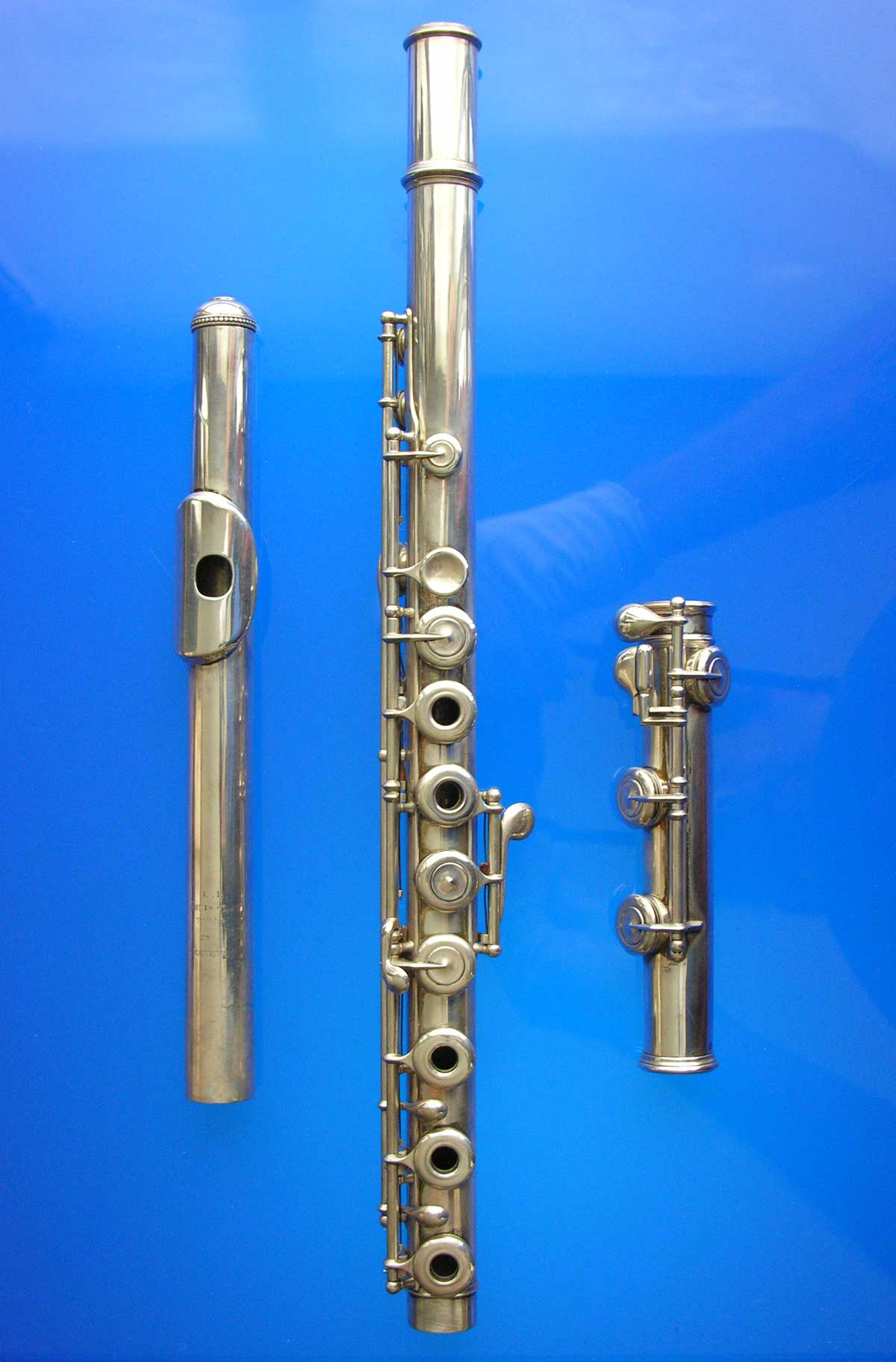 The entire headjoint has been heavily buffed, yet the number 281 is clearly visible. 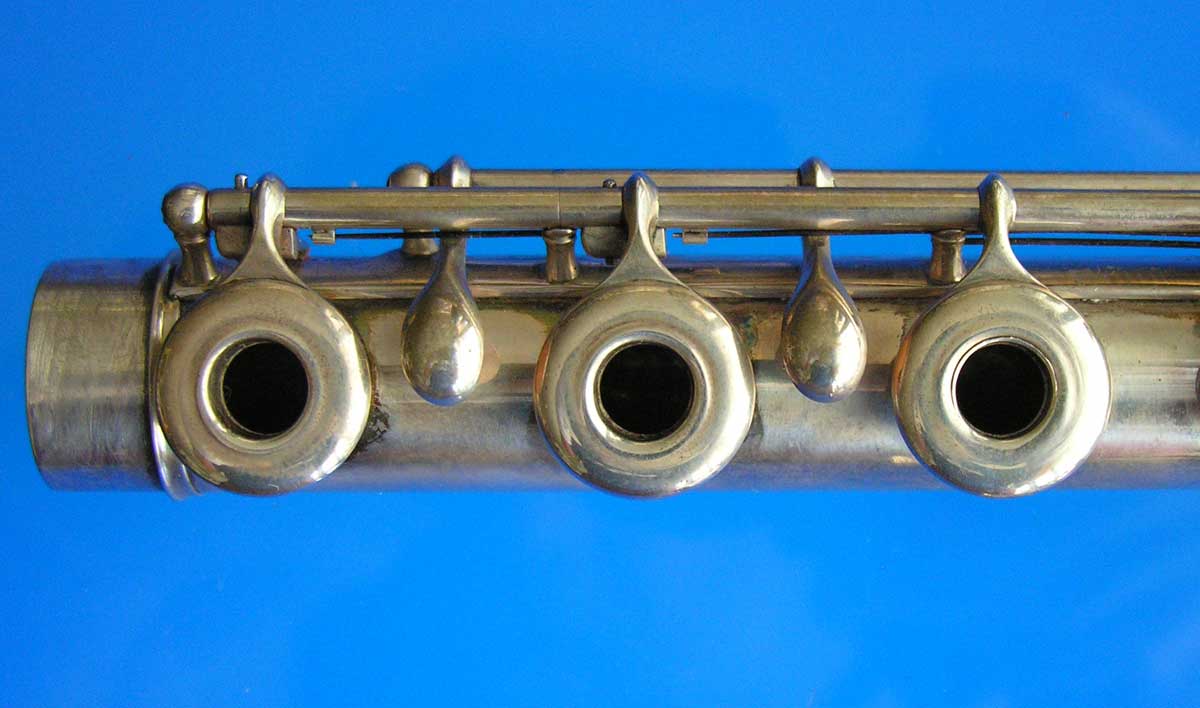 The right hand mechanism shows the extraordinarily effective simplicity of the Lot design. 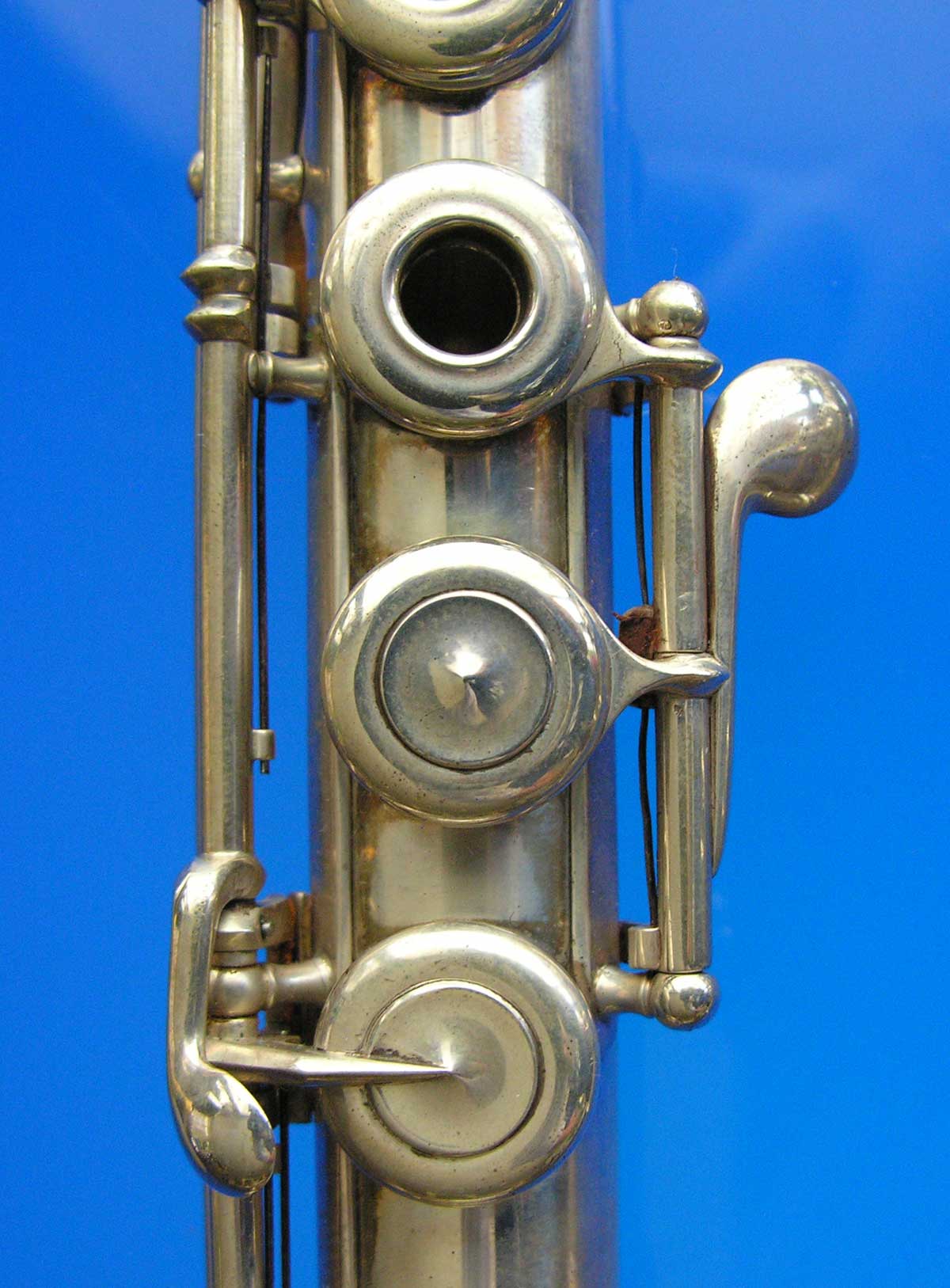 The Dorus G# was extremely clever. Cleverness was generally eschewed in favor of simplicity, and the side G#, as soon as it was invented, had a slight edge. 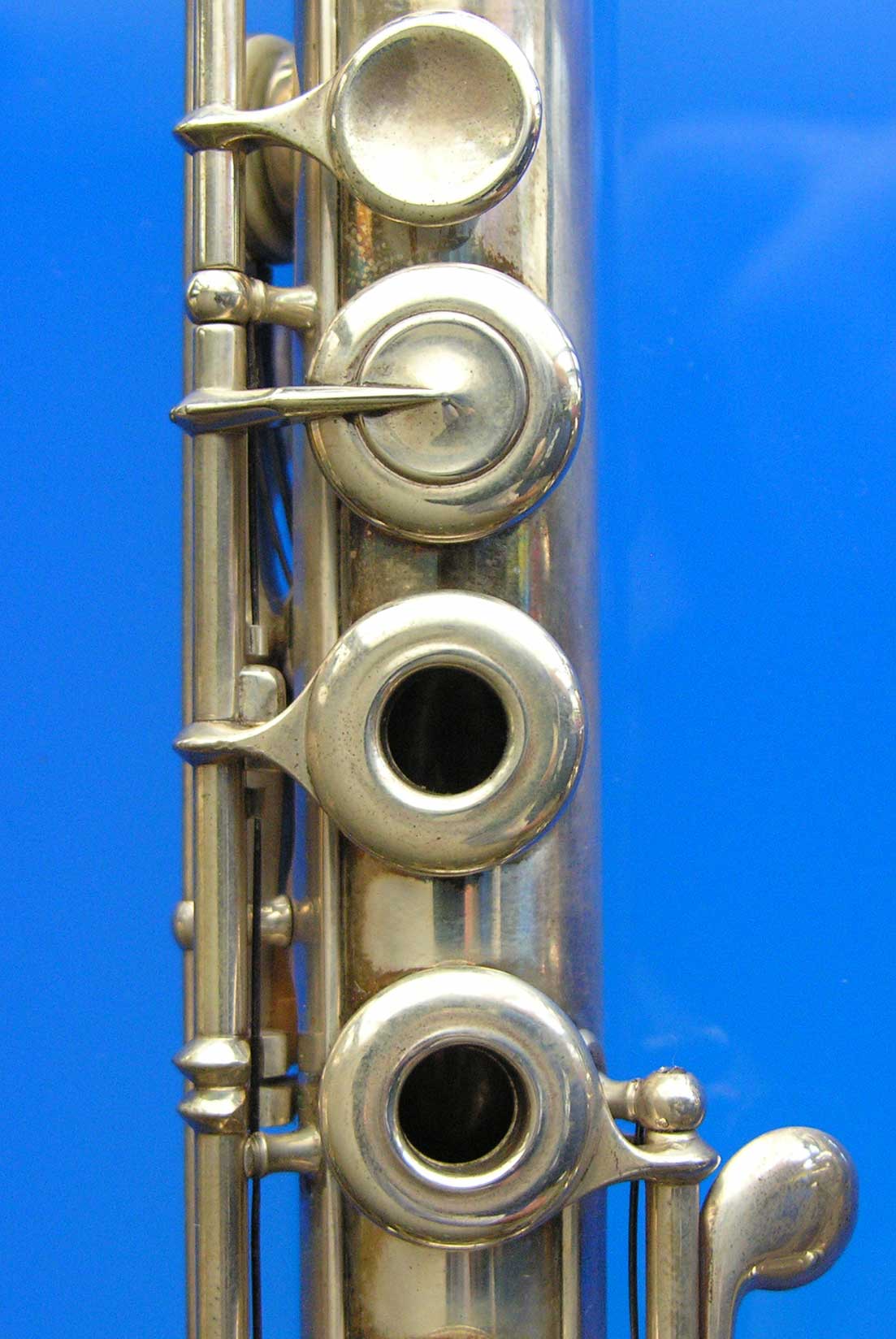 The keys on this flute are heavily worn from use, not from buffing, judging by the direction of wear. 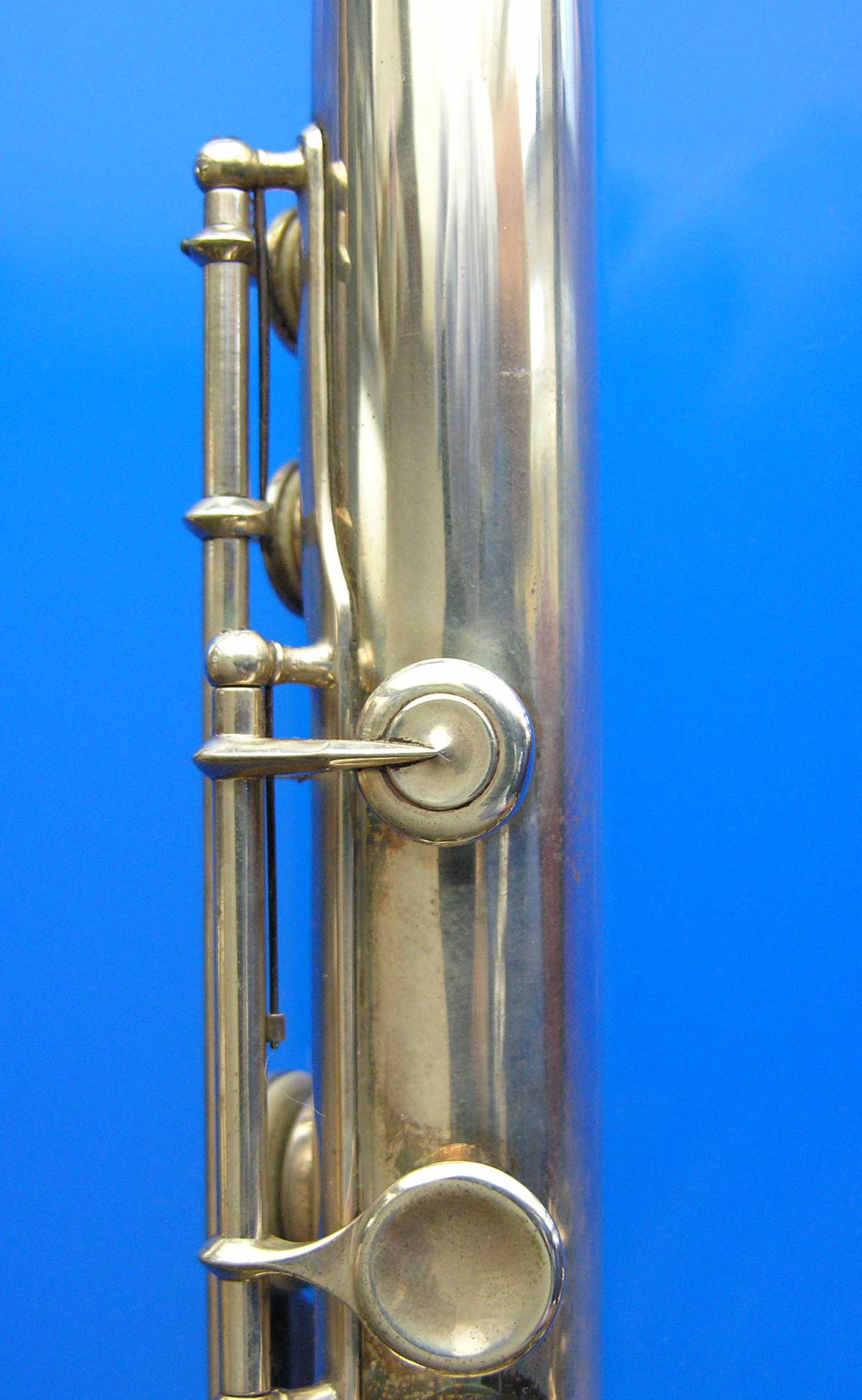 The body is unstamped, yet is clearly a very early Lot body. Of course, it has a one-piece strap. 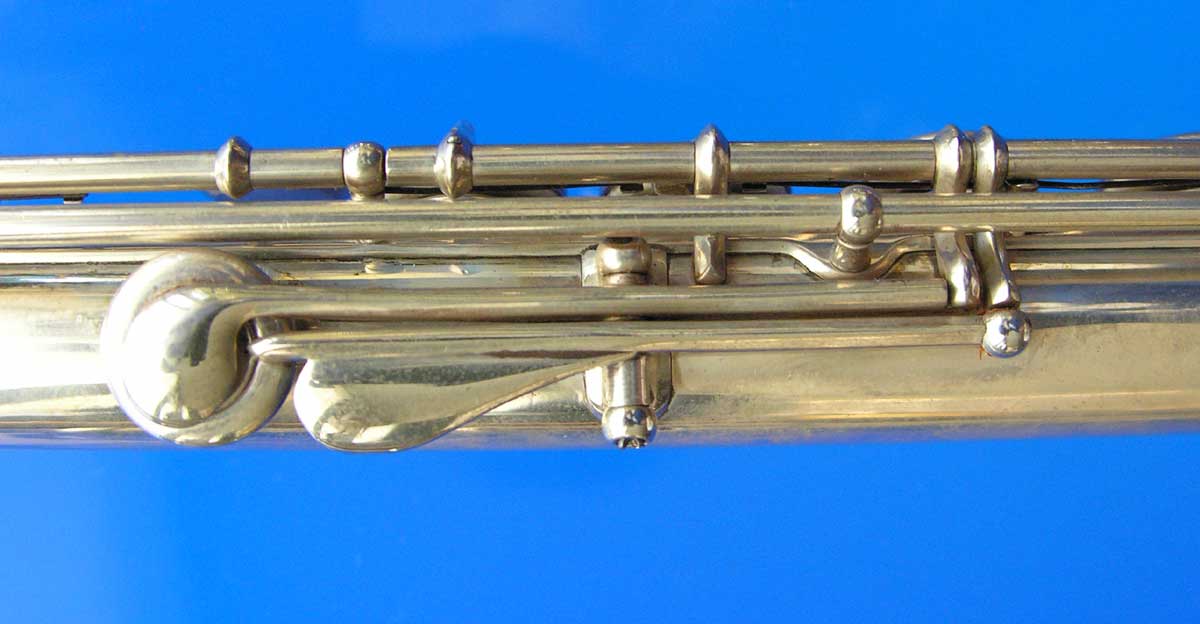 The thumb key retains the beautiful ball-end, which Lot introduced many years earlier on the Godfroy model conical flutes. This was eventually abandoned. 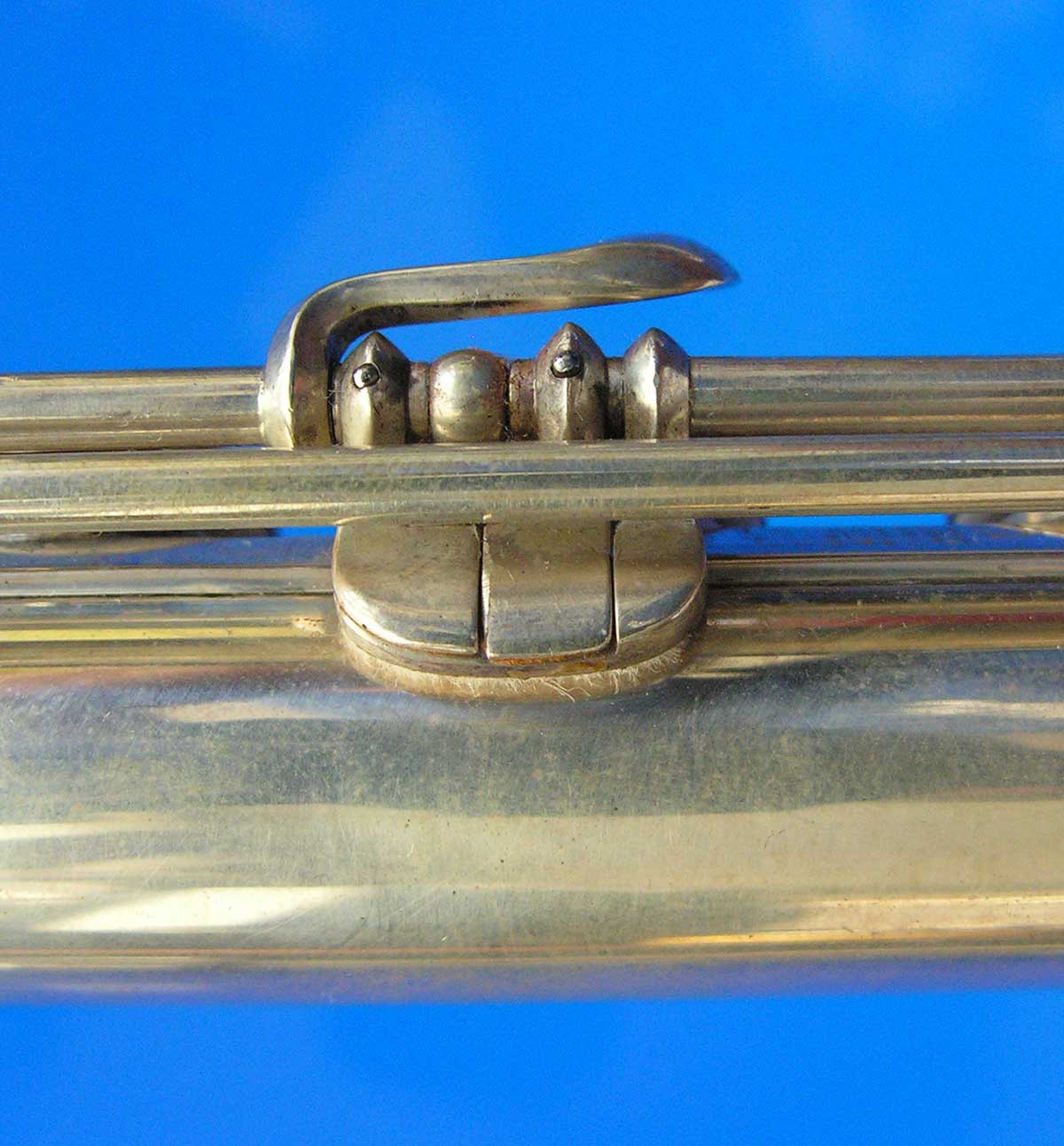 This sweet and early backclutch is remarkably undamaged, considering the love for buffing seen elsewhere on this flute. 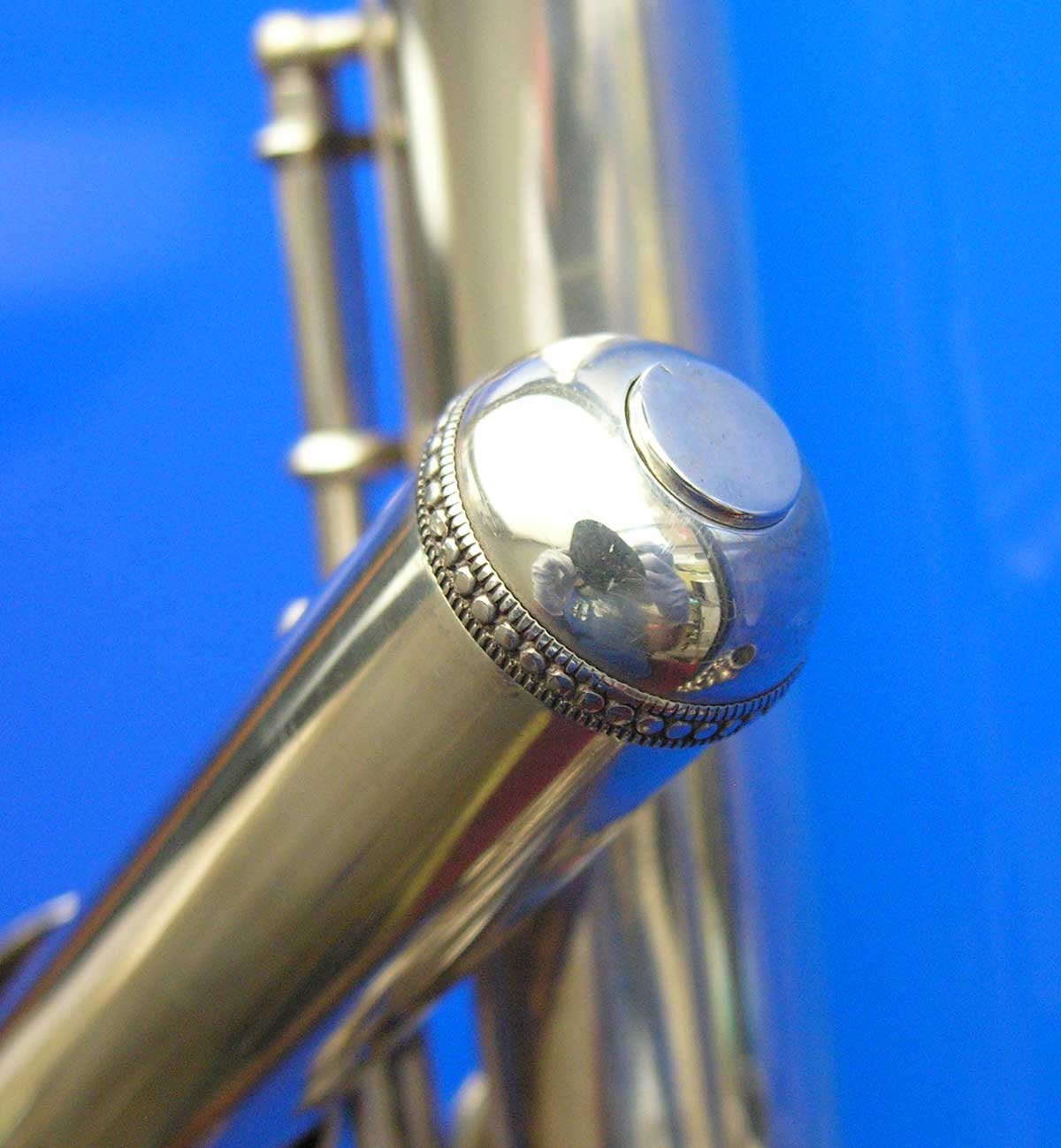 The crown is original, and uses the turned wooden corkscrew inside. 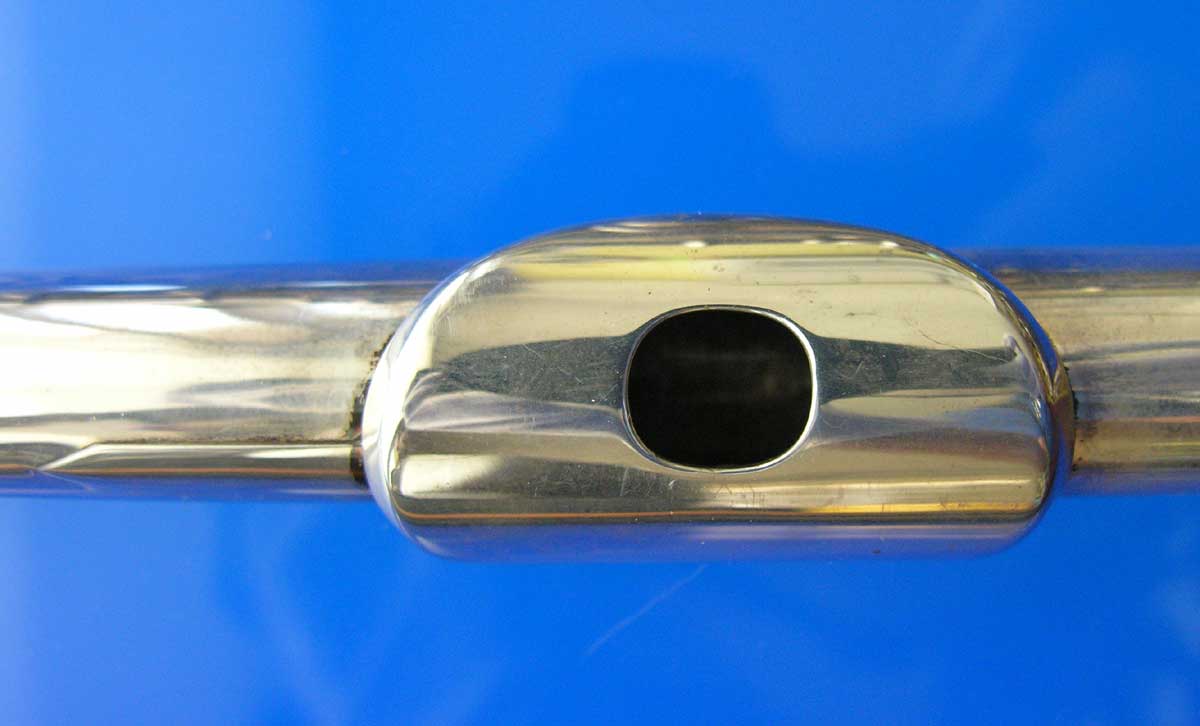 The lipplate and headjoint received a knock at some point, causing the seam to part ever so slightly. This has been repaired with a silver strap, and the lip was resoldered on, including some extra solder where the tube was slightly out of round. Everything looks original, nonetheless. 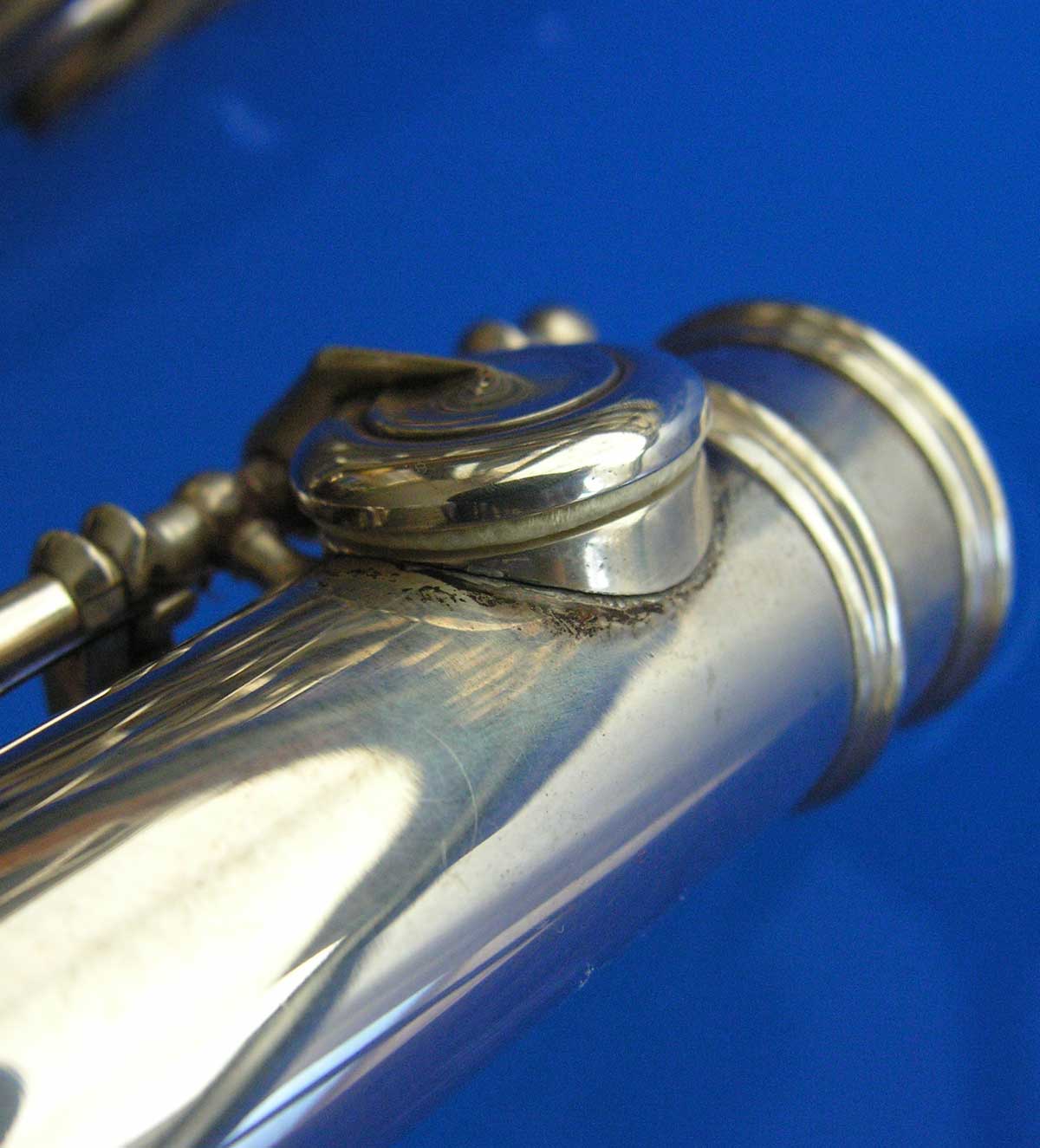 The solder at the toneholes is badly time-worn. This instrument needs a complete re-soldering.

The pinned footjoint with back-clutch. 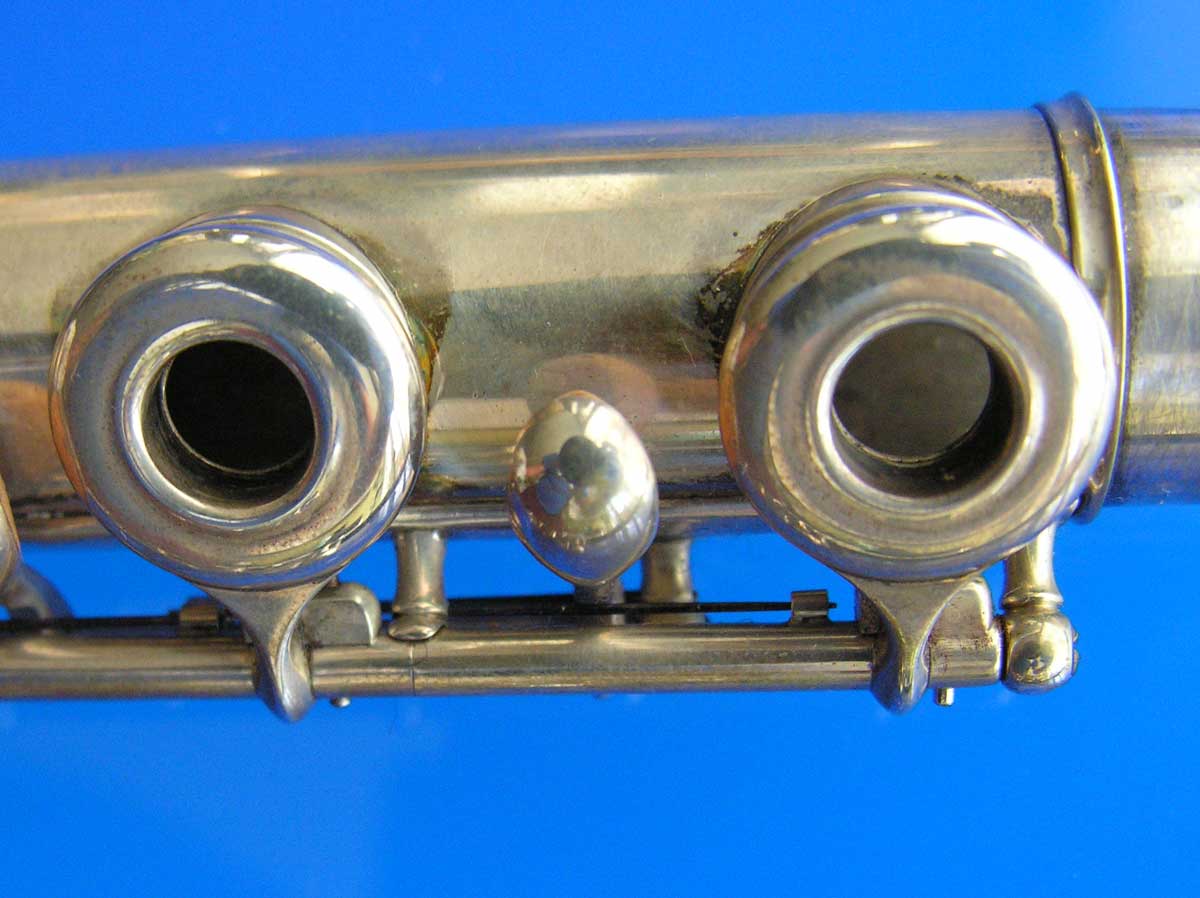 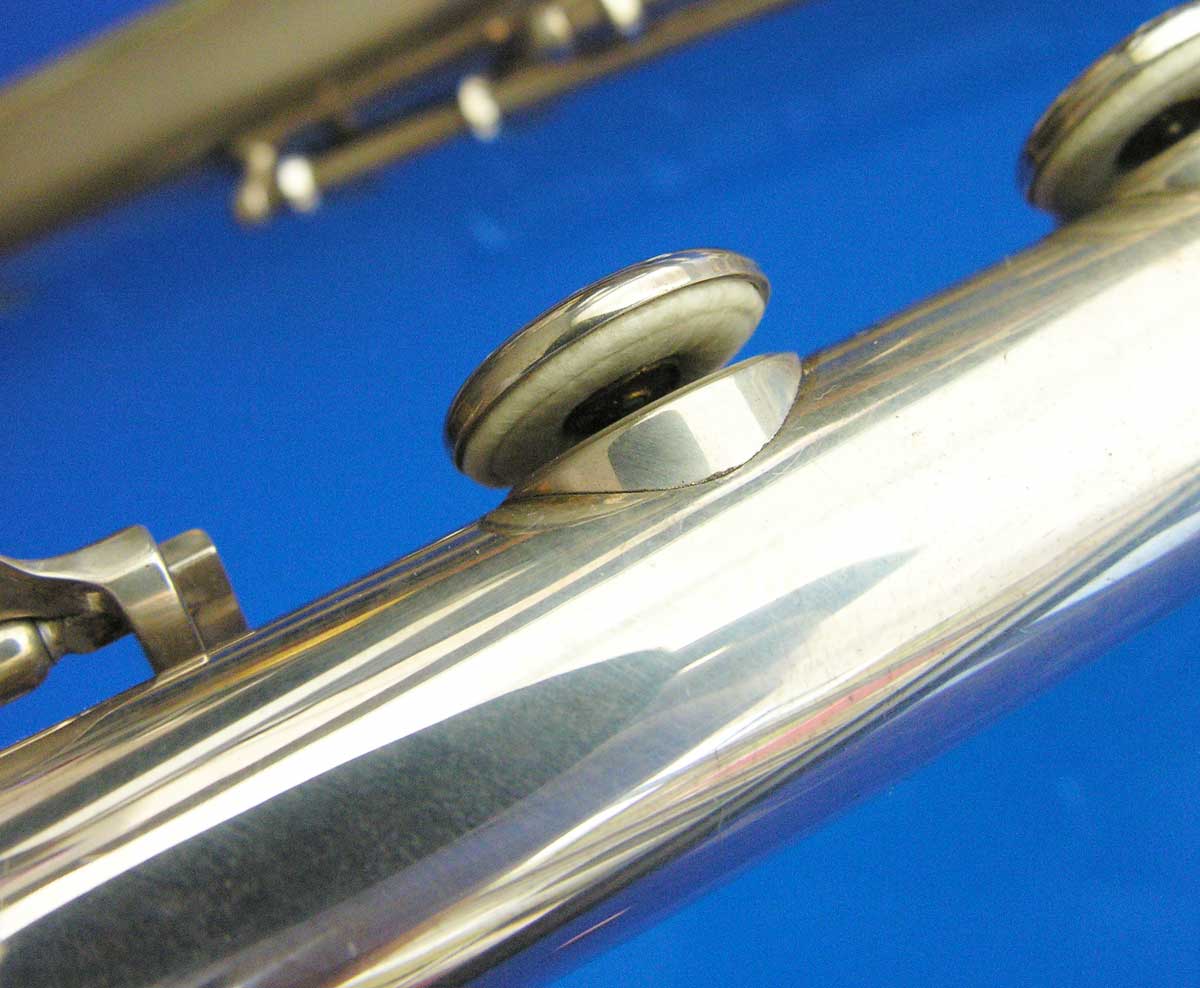 The pad washers are original, except perhaps some of the grommets. 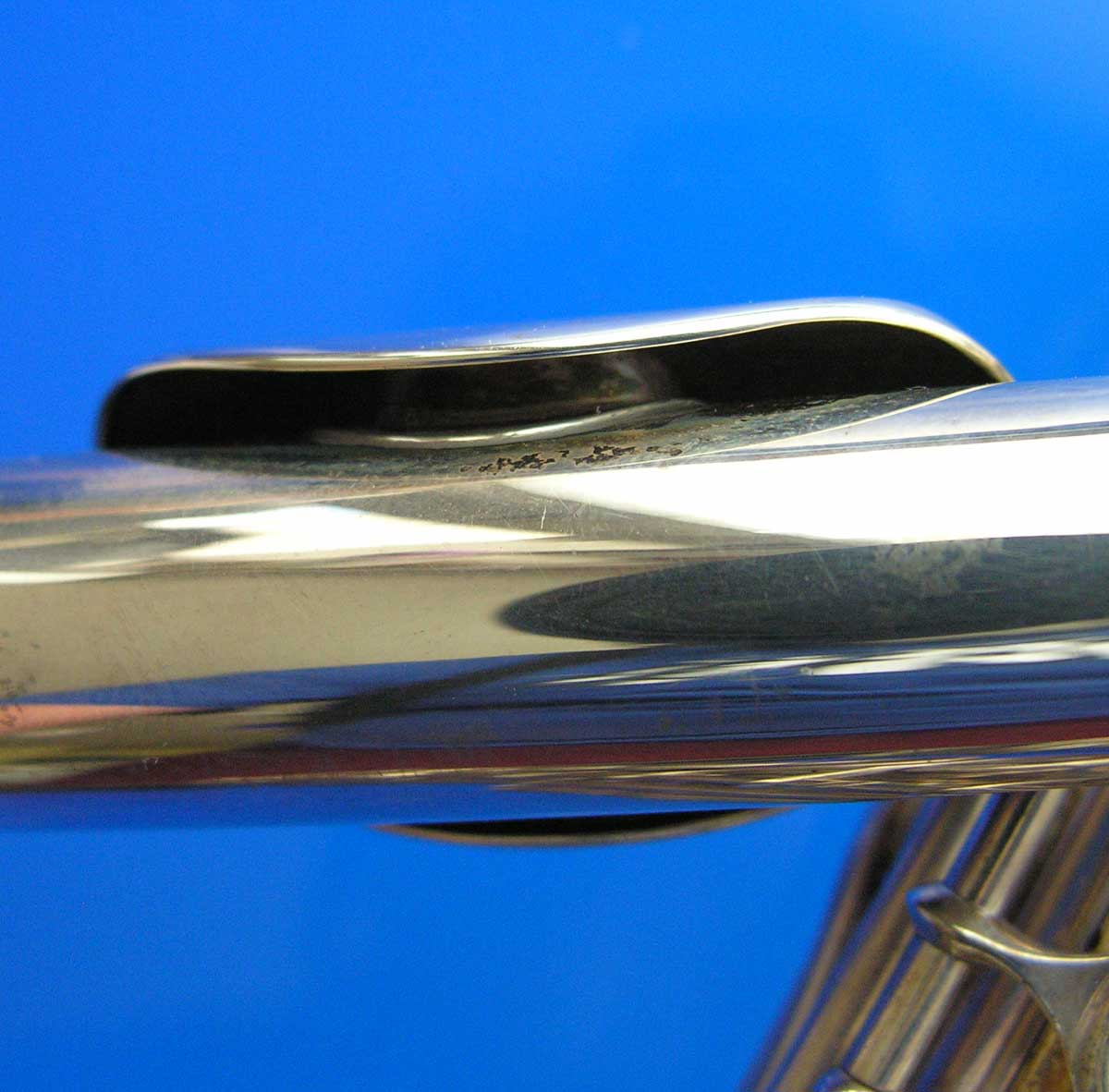 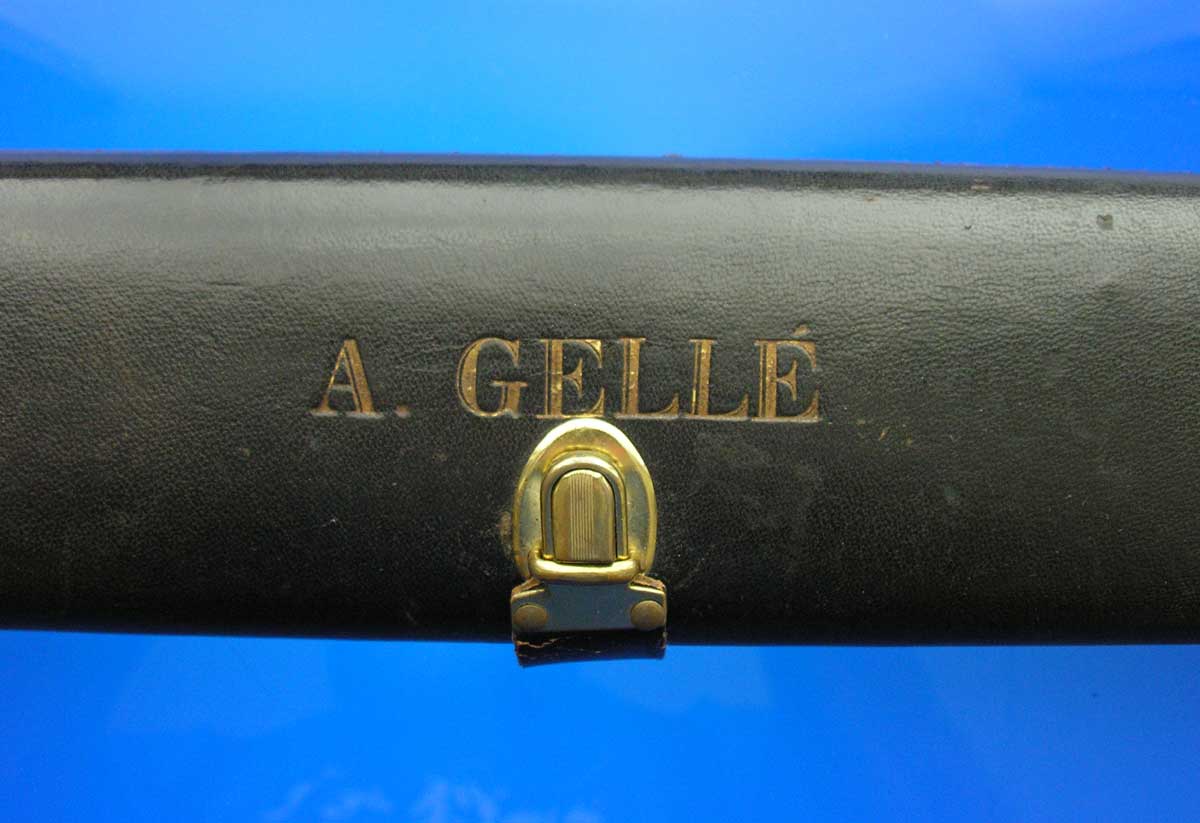