Comments: The most striking element of this instrument is the adaptation of the flute to a 20 mm bore. Theobald Boehm experimented with this size bore in the 1860's. Dayton C. Miller commented on this in one of his informative asides from The Flute and Flute Playing: "[In a letter written in 1867 Boehm says: "I have made several flutes with a bore 20 millimeters in diameter, therefore one millimeter wider than usual; the first and second octaves were better, but of course the third octave was not so good...." [The silver flute with a wood headjoint which is shown in figure 32 has a bore of 20 millimeters; it is the only flute in C of this bore which the translator has seen...]" This Badger flute is considerably more massive than the "Shippen" flute, by Boehm and Mendler, which Miller illustrates on plate 32, if my memory serves me correctly. Nonetheless, it is unquestionably a response to Boehm's work, down to the ebonite head (instead of Boehm's wood). In spite of Boehm's unwitting influence, this instrument is a new flute design altogether. This unique flute, with its extremely full and rich lower registers, not only adds a new chapter to American flutemaking, but a new chapter to the flute-tone itself. No mention has heretofore been made of a Badger flute with 20mm bore.

System: This unique flute is built with a 20 mm bore, very large tone holes, a heavy tube, and foot to low Bb. It is a closed-hole, offset G flute with B trill. The low B is left-pinkie operated. There is a Mother-of-Pearl finger rest (� la Boehm) for the left index. The backclutch is Boehm's two-piece design. Open foot keys height (except Bb) adjustable with Badger's unique screw. Toneholes graduated from 14 mm at B hole. Footjoint toneholes an unbelievable 18 mm. E hole 16 mm. Thumb crutch holder remains, but the crutch is gone. This flute clearly shows Badger's continuing interest in Boehm's flute designing. In the 1860's Boehm experimented with the 20 mm bore, as well as perfected the use of wooden headjoints on silver flutes.

Condition: This instrument is in excellent, unaltered condition. The ebonite headjoint has matured to the usual pea-soup color, otherwise signs of modest use only.

Pitch: I believe this flute was pitched at A=448. Some adjustment is available with the headjoint, but it seems to loose effect down south when the sound reaches the bottom of this very large bore flute. 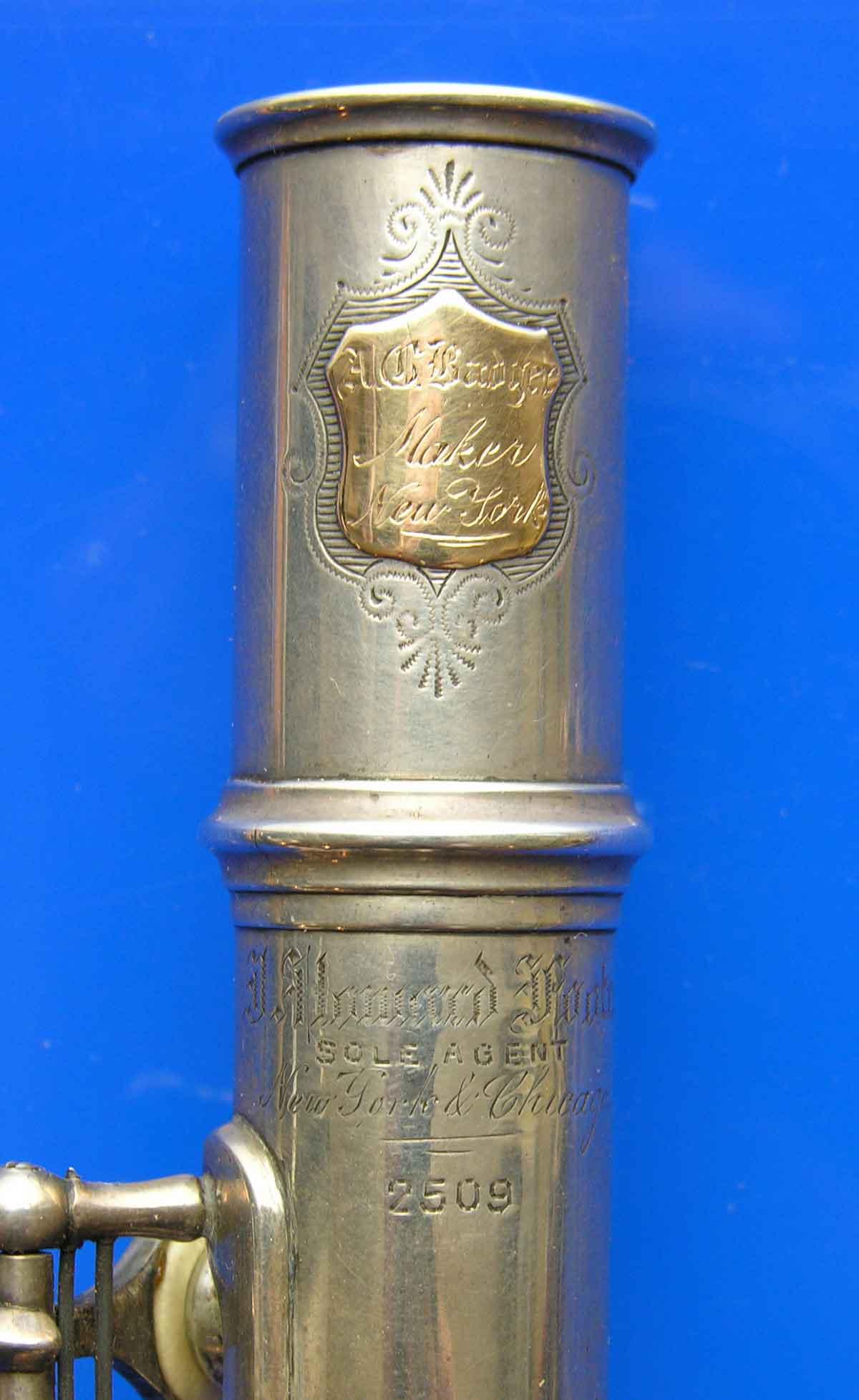 Badger's gold seal is seen above the stamp of Howard J. Foote, a frequent dealer of Badger flutes. The serial number is possibly Foote's, since Badger rarely numbered his instruments. 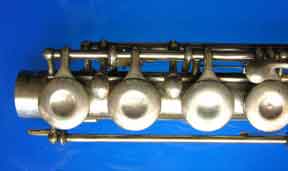 This enormous flute is built with Lot's new "hanging T" clutch, even as it preserves much of Boehm and Mendler's aesthetics. 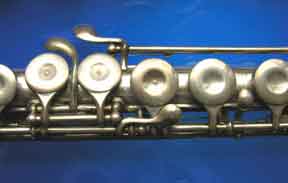 The offset G#, with touches for a B trill, the independent G#, and the low Bb on the outside. 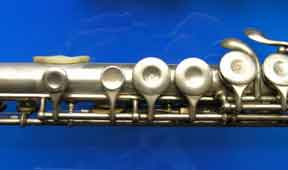 The left hand keys, with Boehm's finger rest on the side. This rest is made here of mother-of-pearl. Badger's classic long arms and high keys are joined with the classic dimples caused by screwing the pad screws in too far. 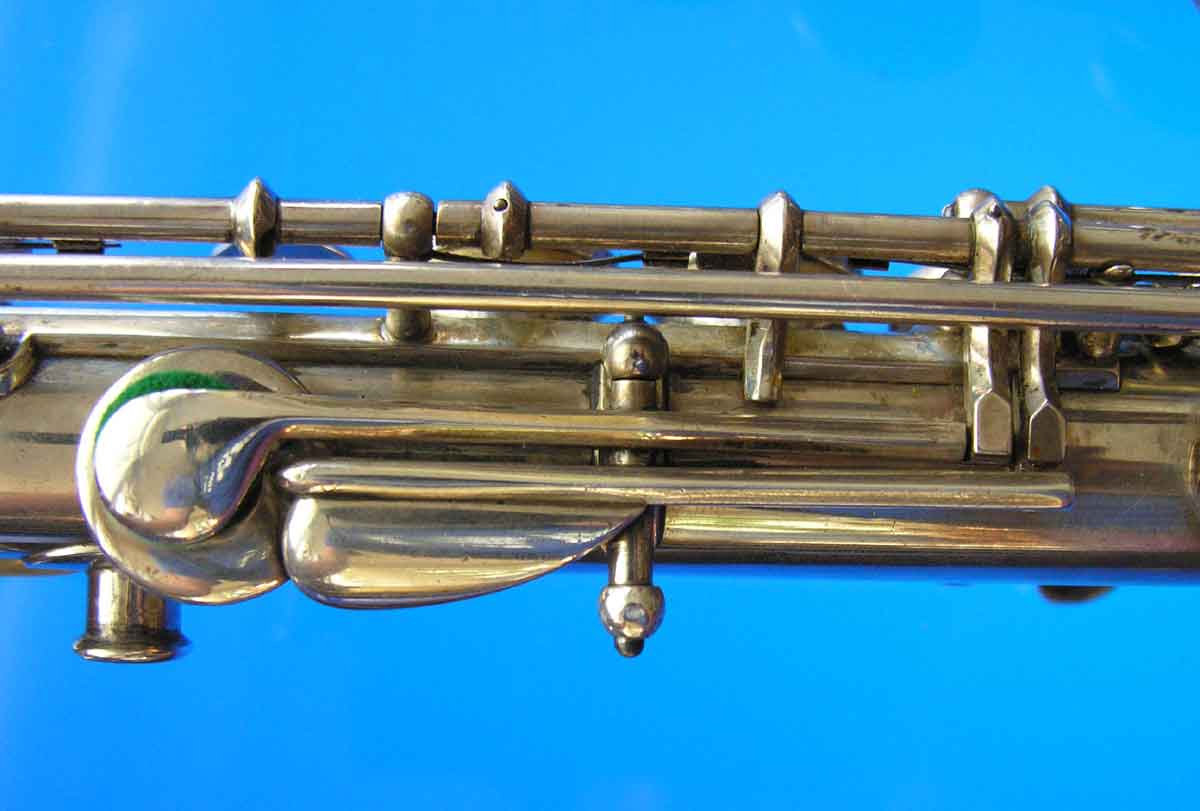 The thumb key, with trill. Note the squared tips of the tails coming down from the rods above. 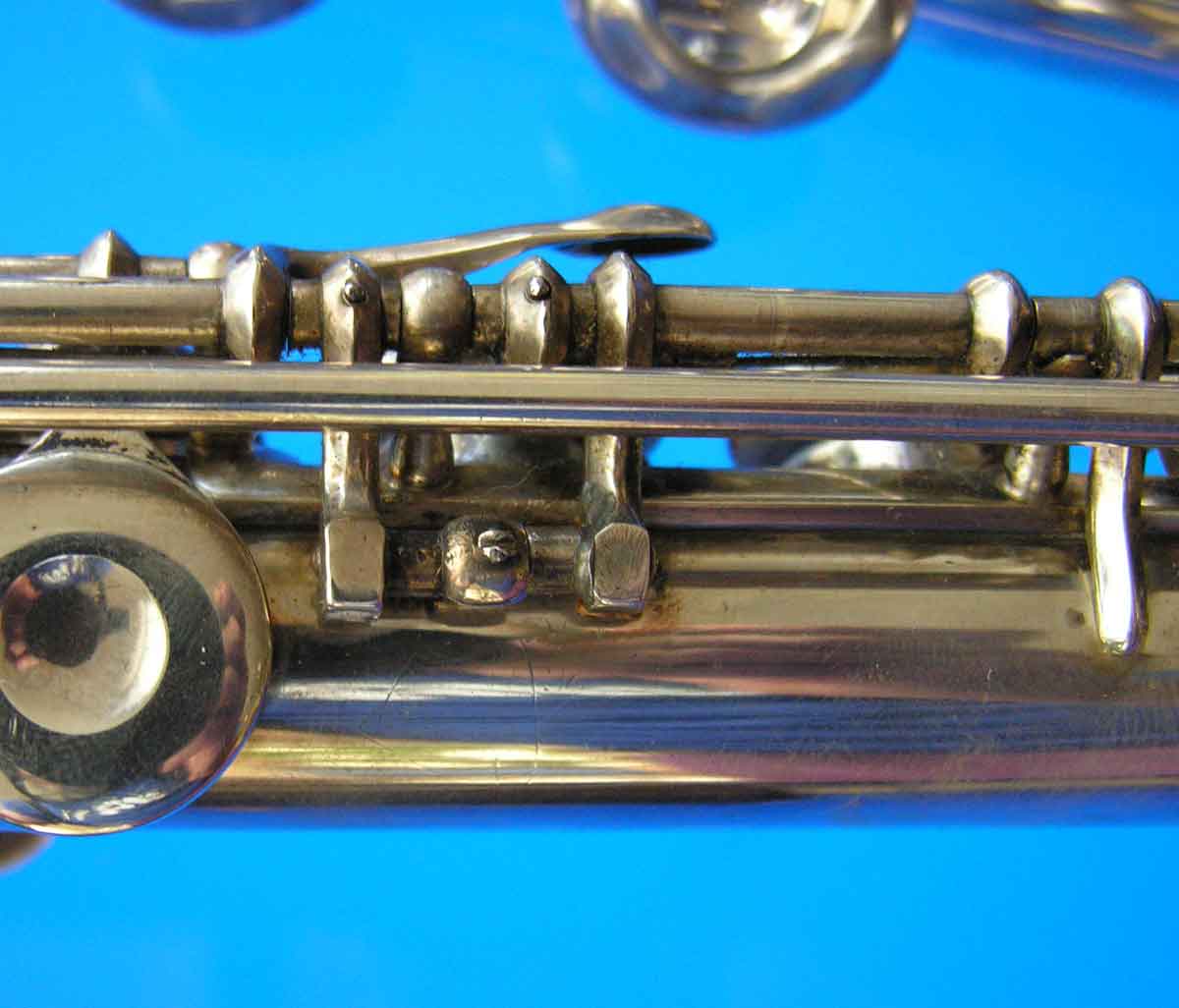 Here we see the squared tips again, this time at the back-clutch. This clutch is a mixture of Villette and Boehm, having the rounded set screw over the two-piece clutch. 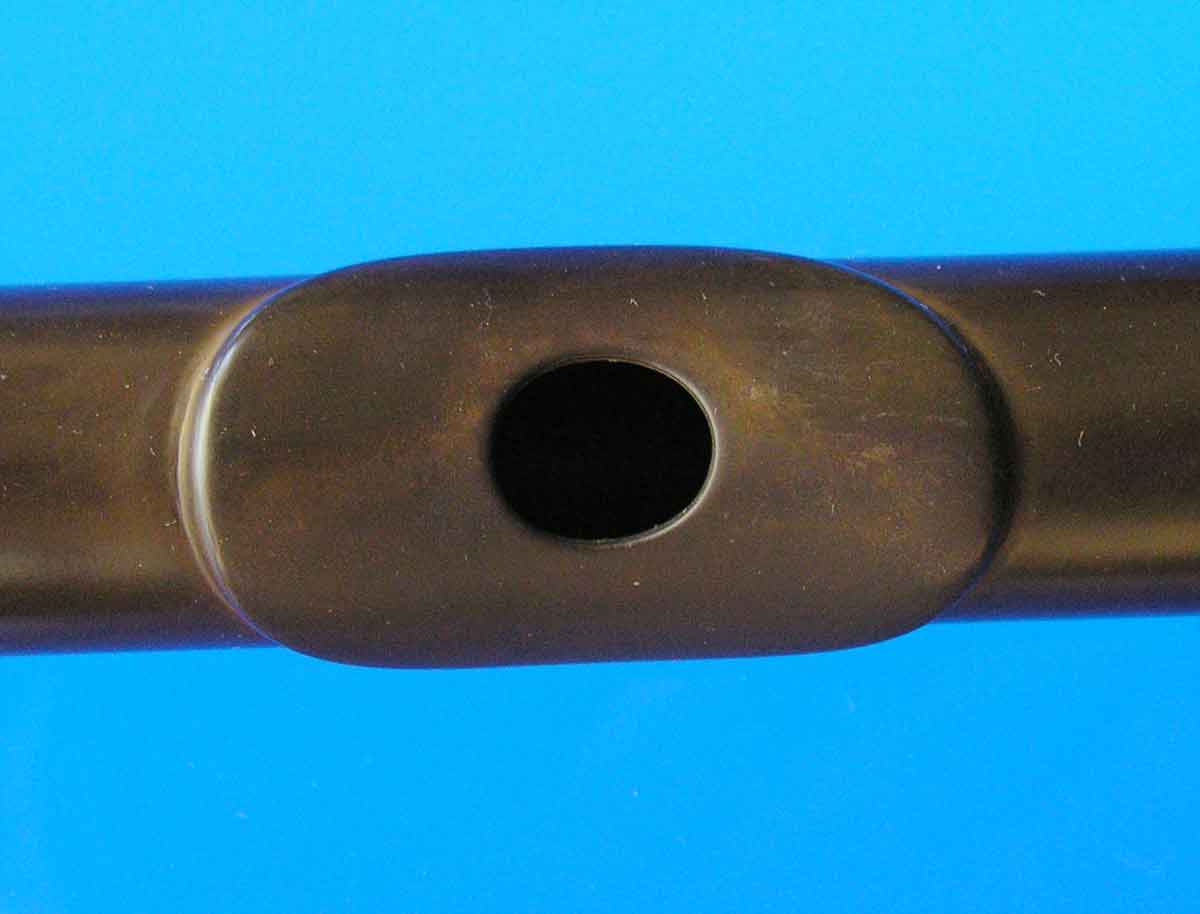 The ebonite headjoint, with oval embouchure. Badger pioneered the use of compressed rubber in instrument making. The tone is rich and woody. 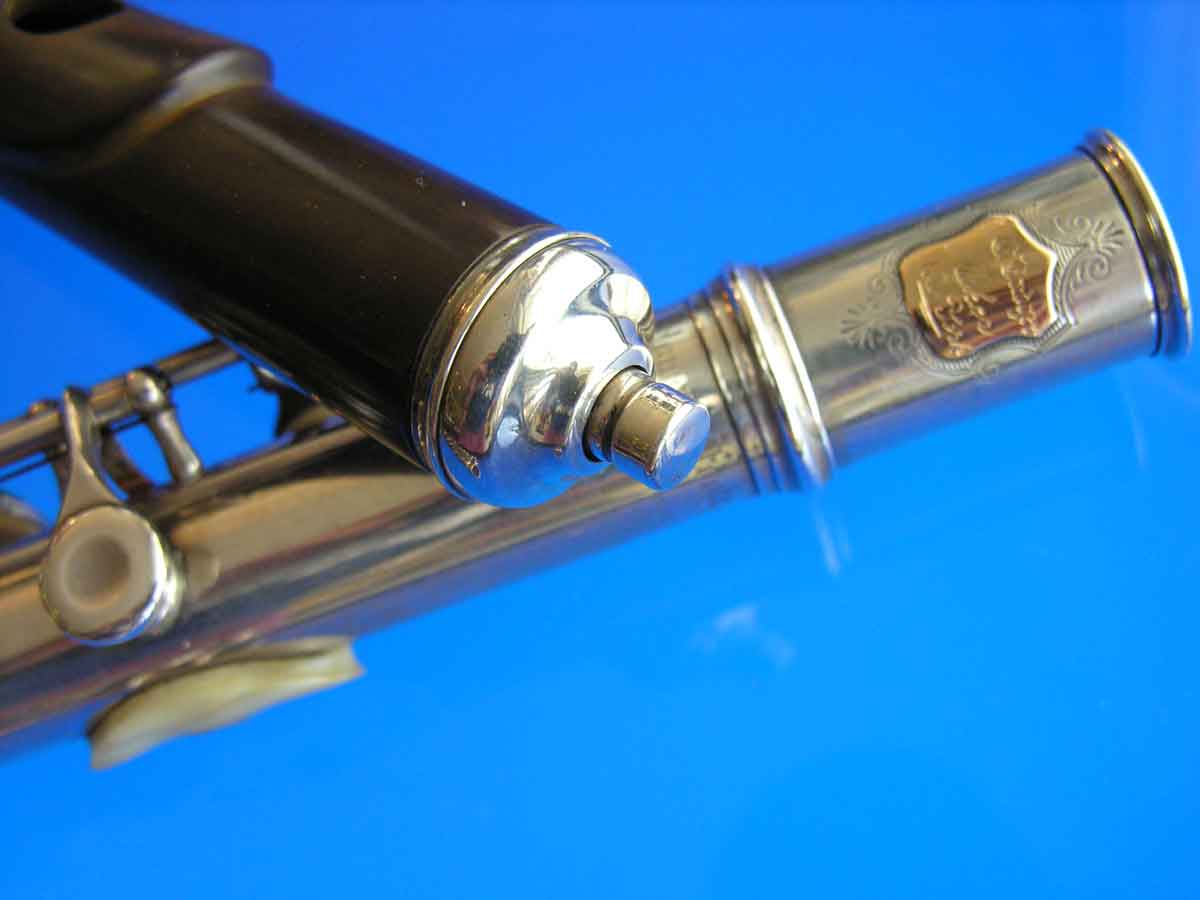 Badger's aesthetics were unique, and are seen in this lovely sculpted crown, with adjustable wooden screw. A small paper inside the crown reads "Meare Mannce". 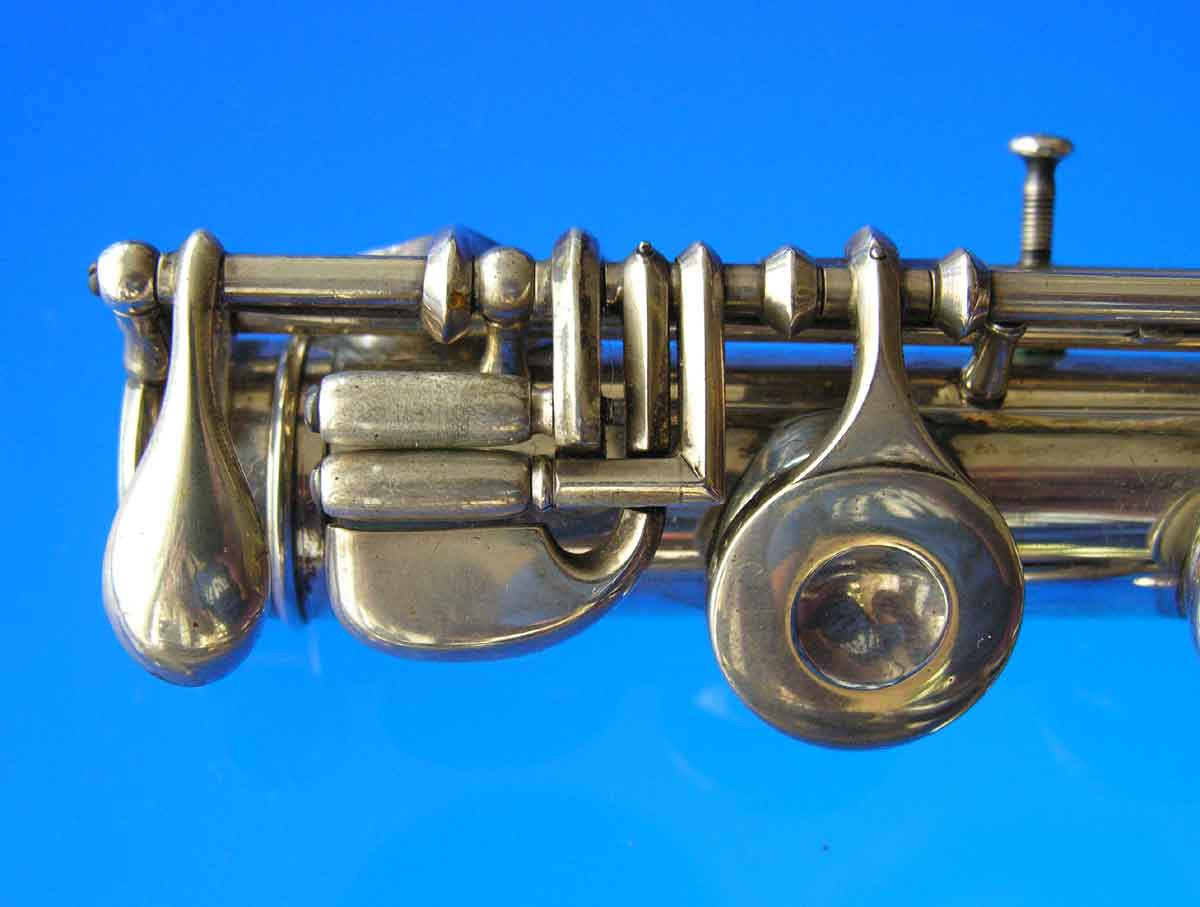 Badger's foot is based on Boehm and Mendler. here we see the touches to B; the Bb is left-pinkie operated.

The rear of the foot shows the pin and clutch. The loop to B includes Badger's trademark adjustment screw for the foot key height.

Here we see the whole foot, with the adjustment screw above, and the Bb key to the right. 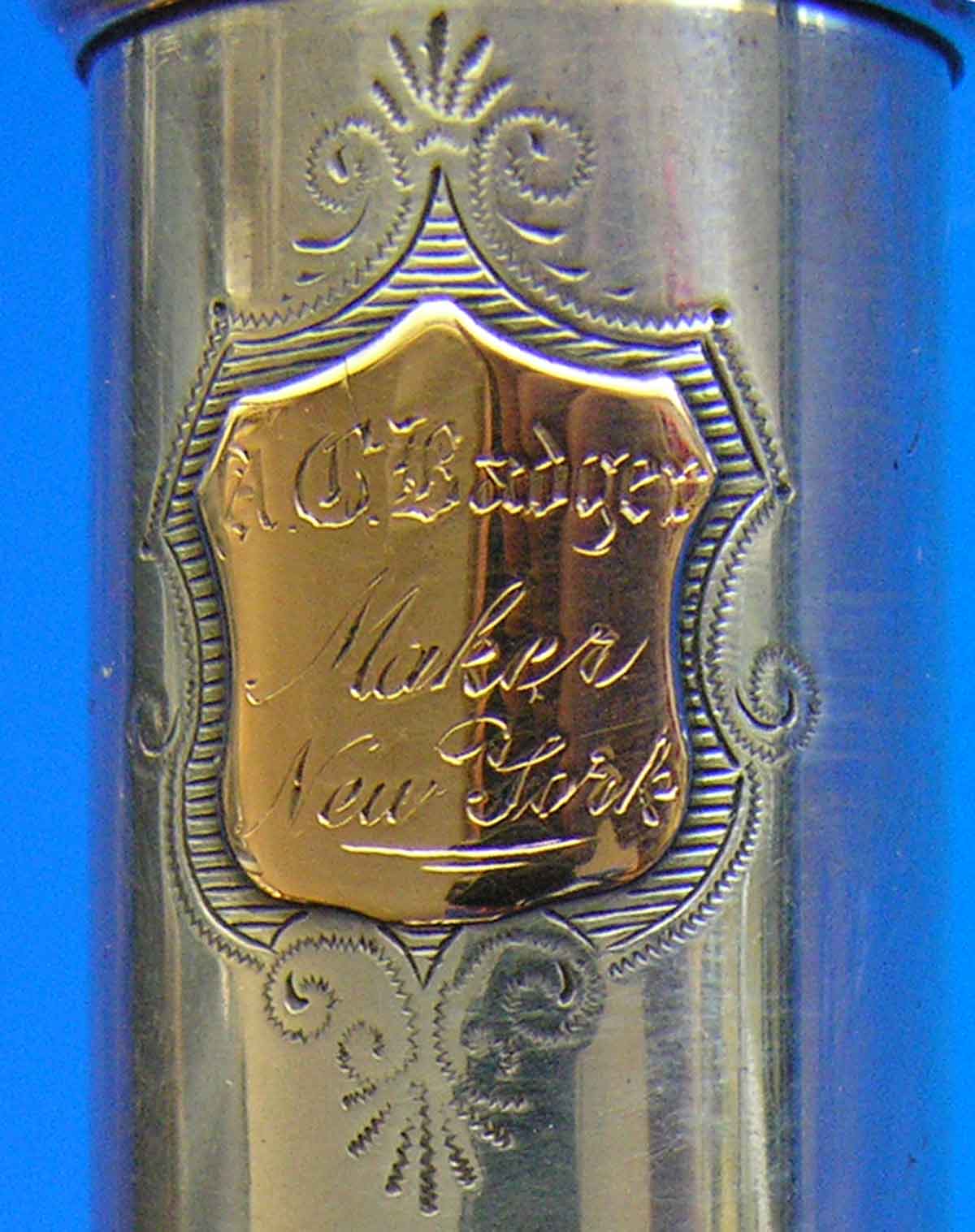 Badger's gold name stamp with the word "Maker" was apparently used in the 1880's. 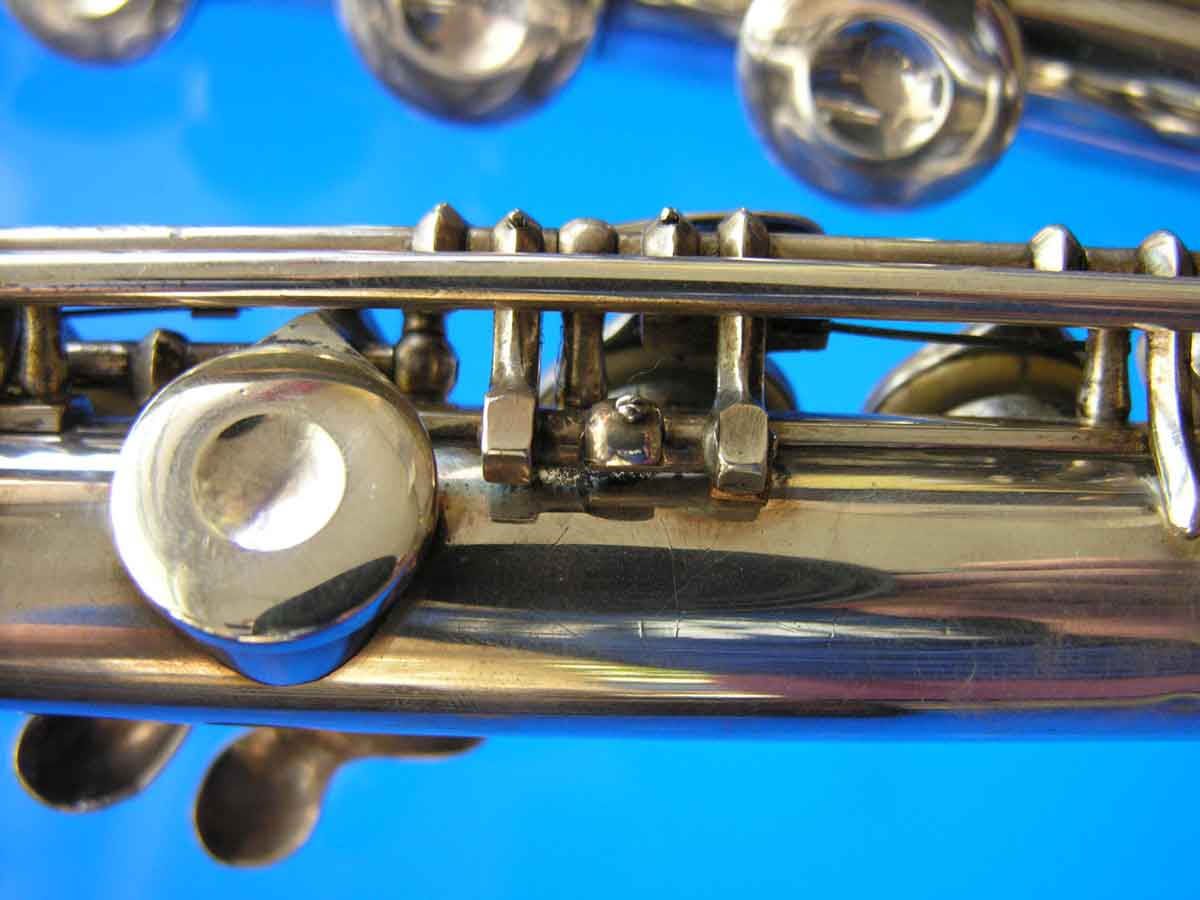