Manufacture Date: Made in 1871 (Giannini). Louis Lot was 64 this year, and very much active as the proprietor of the shop. He had largely finished his developmental work by this time, although he still maintained some of his cherished, but more expensive to build ideas.

Hallmarks: This flute has no hallmarks, which is to be expected. The Louis Lot shop did not register any hallmarks until Lot�s first successor, H. Villette, registered a maker�s hallmark with his initials around 1880. Nonetheless, this flute is made of silver throughout.

Comments: There is a regal feel about this flute; perhaps from the elegant engraved lipplate at the top and the mysterious obelisk at the bottom. Everything in between is perfect Louis Lot, at yet another highpoint of his workshop. This flute was purchased in 1946 by Sunna Gerber, one of the first professional woman flautists in Switzerland. She purchased this flute while a student of Andr� Jauret's at the Zurich Conservatory. Jauret assisted in the purchase of this instrument from the orchestra in Vienna, which needed a piano. Sunna Gerber became a member of the Zurich Chamber Orchestra, and toured Europe as a soloist with this orchestra. She played this flute, and other players often admired it in her travels. Sunna Gerber became the first woman professor of the flute in Switzerland, at the Zurich Conservatory. Mrs. Gerber writes that she, "wishes to the new owner of the instrument all the best and she likes to give the part of the history of this Louis Lot flute to the next lucky owner." This beautiful flute has undergone complete restoration here, and has emerged in her full glory.

Material: The tube and keys and lipplate are silver. The springs are of steel, which is also normal for this shop. Lot�s colleagues, Theobald Boehm and Carl Mendler, were the only ones using gold springs at this time. The pad washers may have been originally gilt (gilding mostly lost). Louis Lot had a very holistic attitude towards his flutes. This is especially seen in his pad washers. Lot meticulously shaped the washers with a graceful curve, and then gold plated them, to treat the singing air with the utmost respect. Over time, the added curves disappeared, but for a long while the gilding did not. The washer for the top G#, and the grommets for the F and Bb appear replaced with, probably, later Lot parts.

System: This is Lot�s model 5, silver flute with C foot. This has been the most popular flute model ever designed. Since it�s introduction by Lot and Godfroy around 1850, virtually every flutemaker has adopted design elements from this model. The trill is to B. For many years, flutists used this lever to trill the thumb key, giving a B to C trill. Lot called this a C trill, incidentally. After Lot�s retirement, sometime in the 1880�s, the use of this trill to close the Bb key, on top of the flute, became widespread. The topside clutches are Lot and Godfroy�s original shoulder clutches, before the �hanging T� clutch was invented. These clutches, along with the ingenious �back-clutch� constitute Lot�s ability to synthesize disparate parts into a simple whole, making order out of the chaos of Boehm�s invention. The lipplate is the �over and under�, or Top Hat style, with a full flange on the top and bottom of the chimney. We believe that this is the special �embouchure uni�� Lot mentions in his record book, starting with flute #740 in 1863. This embouchure design gives considerably greater support to the lipplate, and allows a thinner piece of silver. Furthermore, the plate can be soft-soldered to the chimney flange. The lipplate is cut with Lot�s �Guilloch�� pattern. This is a machined engraving, using a special tool. It was an extra order, and was one of Lot�s few nods towards the machine age. The guilloch� cut gives the player more control at the lip, and adds elegance to the flute. The tone holes are graduated. There are three basic sizes, 14.5mm (left hand), 15.2 mm (right hand), and 16.5 mm (foot). Boehm also believed in graduated holes, but they were more expensive to manufacture, he said. The footjoint is the original pinned design with backclutch. This beautiful and elegant footjoint was first designed by Lot and Godfroy shortly after purchasing the cylindrical patent rights in 1847. It was immediately adapted by most flutemakers, whether for simple-system or new model flutes. I believe that Lot continued to use this pinned foot, although the modern pinless foot was introduced around his retirement. The tail of the low C key rests on the mysterious obelisk that Lot used for a few years at this time. There is something special about this obelisk, which shows up on some of the Lot company�s tastiest flutes. Louis Lot eschewed complication. There is no real benefit from this obelisk, which simply replaces the longer tail generally in use. It is highly possible that this is an artistic choice, invoking a special meaning unrelated to efficiency. The last time we suspected �external� symbolism in flutemaking was the introduction of Claude Laurent�s �zig-zag� G# key in the tumultuous few years after Napoleon�s downfall.

Condition: This flute has just come from our restoration shop. She has been returned to her magnificence. A full restoration report is available in pdf format. Please write to request a copy, if interested.

Pitch: Originally pitched at New Pitch, or A=435-438. Has been used professionally at a higher pitch. Currently set up for A=440. 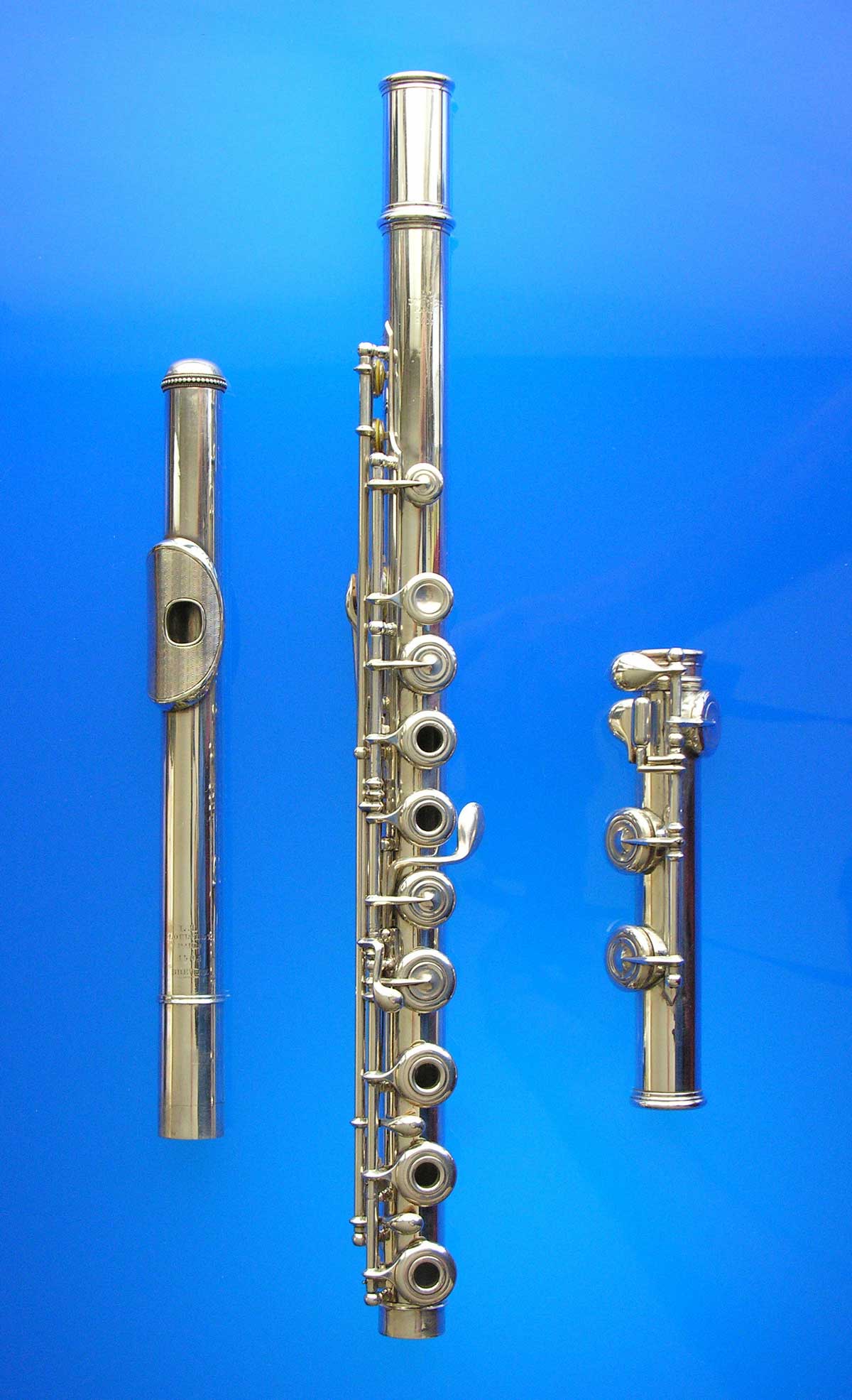 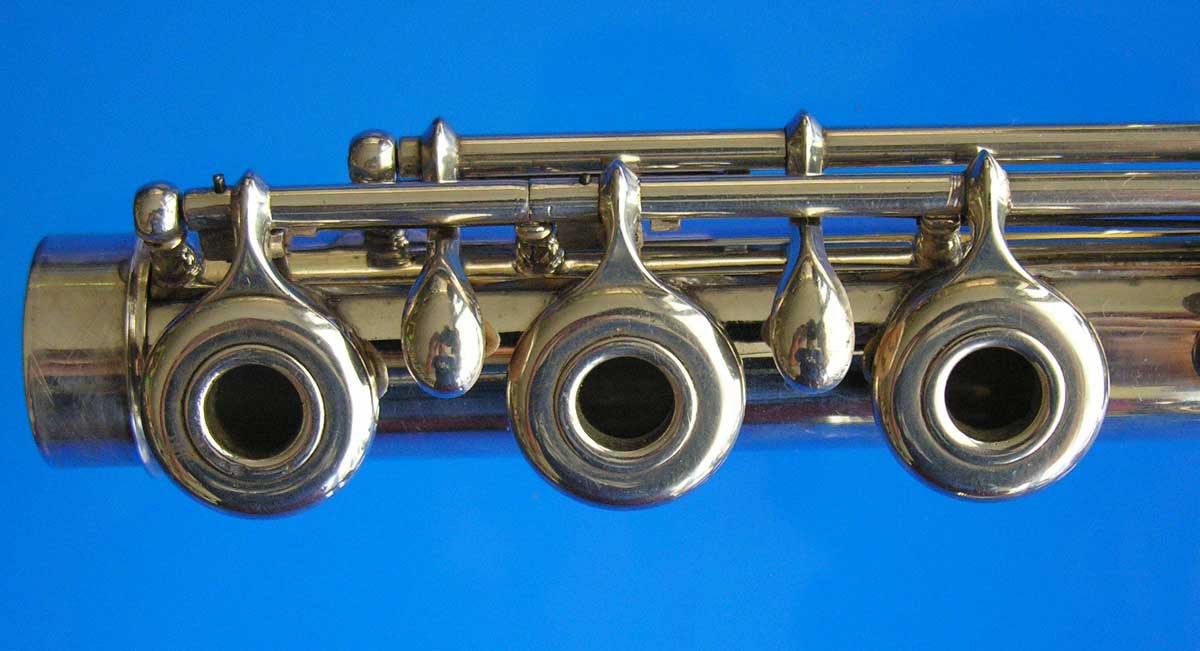 This photo shows the brilliant, elegant, and above all simple, clutch designs which have made the Boehm system possible. Under the two keys to the left are little shoulders, pinned to the steel rod inside the silver tubes. This rod is also pinned to the F# key, whose pinned rear is seen in the "backclutch photo" in the middle of the backclutch. The F key is connected to the right side of the back clutch, which extends all the way under the F# spade and the left hand spade, which is pinned to the Bb rod. The knob in the middle of the backclutch top is the "kingpost", which separates the right hand from the left hand mechanism. 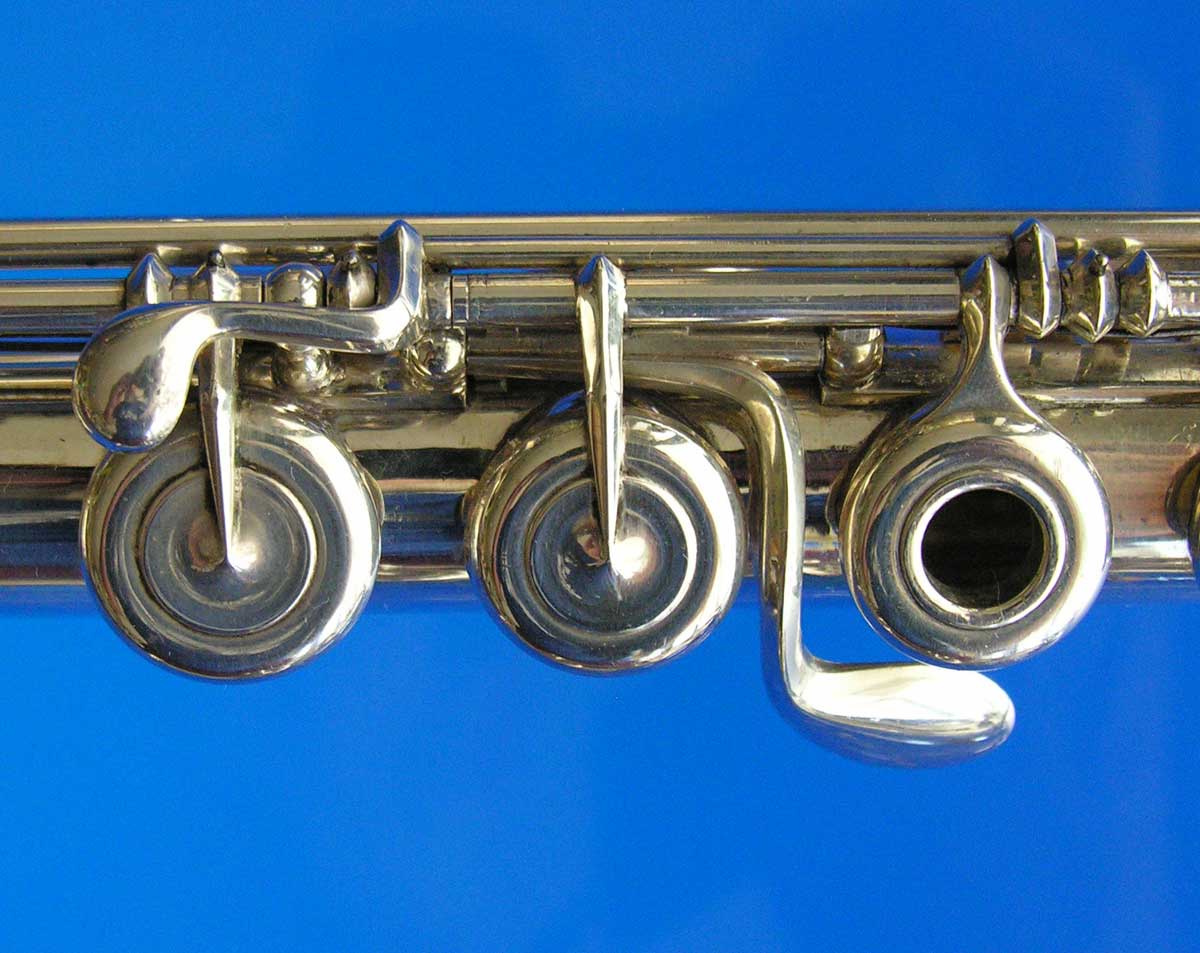 This is the "independent" G#, invented by Lot or Godfroy, probably in the late 1850's. The earliest attempt at this key is seen on Godfroy silver flute #600, which makes dating the Godfroy flutes even trickier. Here we also see the remains of an old swedging to the left of the G#, and the slight increase in key size at the far left cup. The B trill touch curves gracefully to the left, in aesthetic communion with the G# touch below. 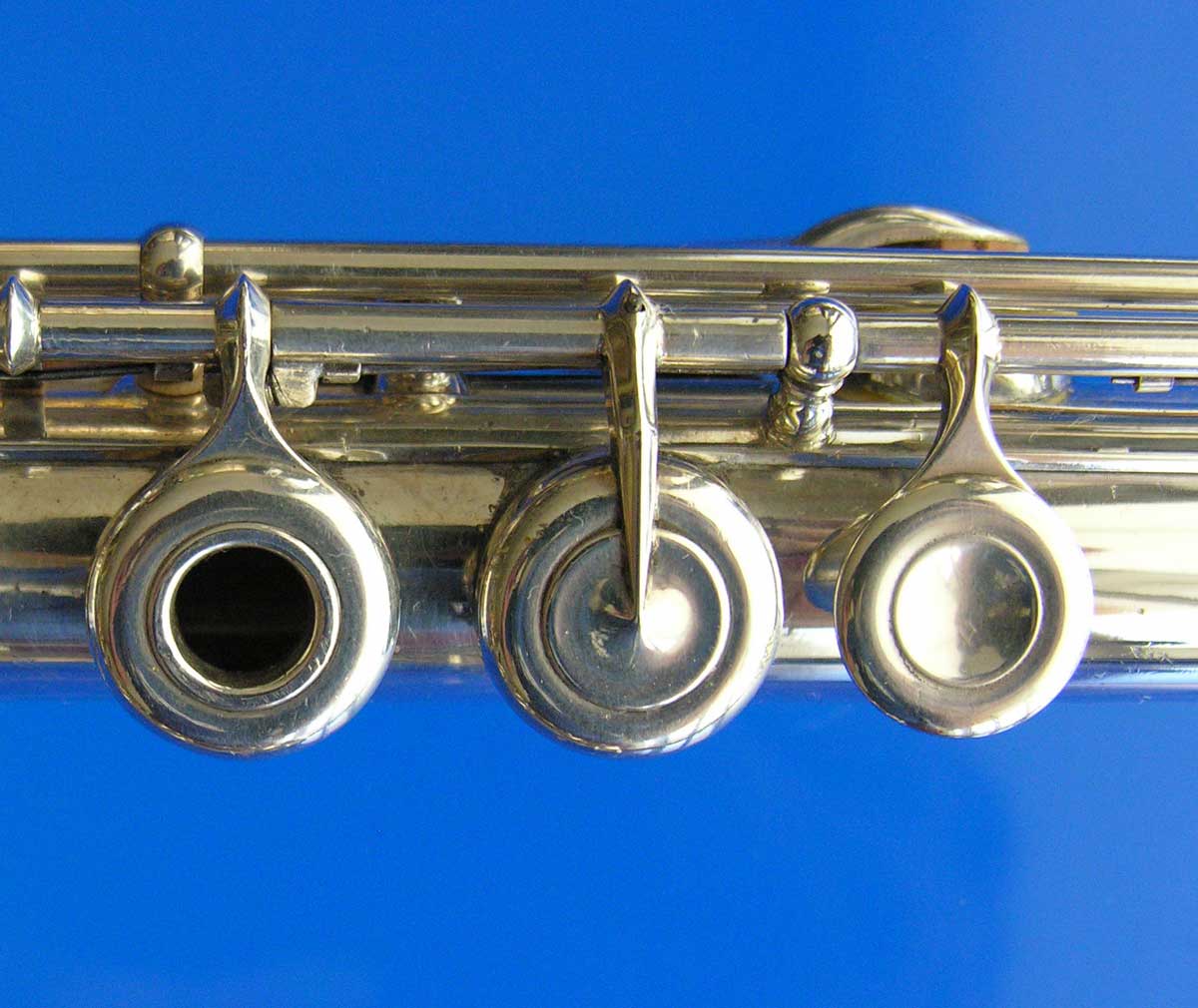 This flute is in excellent condition, considering practically constant professional use for many decades. Most of the restoration work was to correct mechanical wear, not damage. 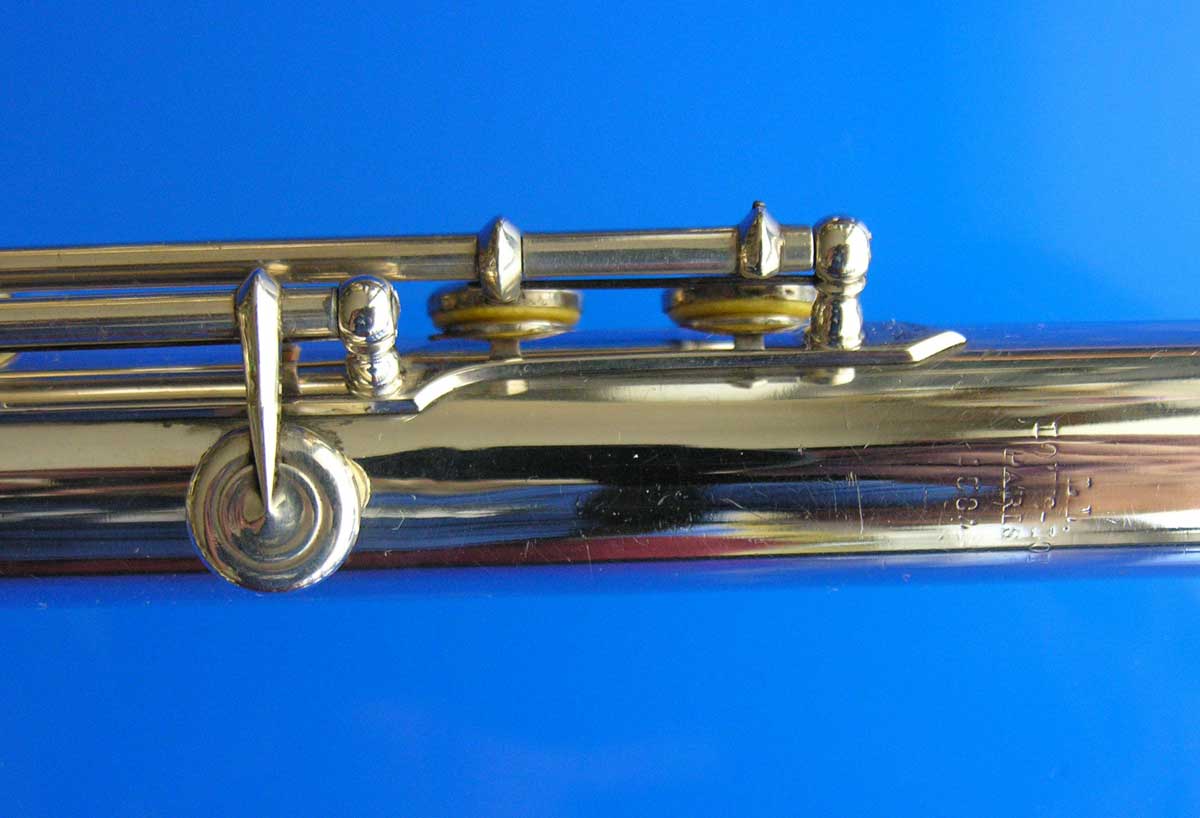 The upper strap, curving down to include the trill keys, was split by Villette, Lot's successor. This is the first place to look to see if a body is by Lot himself. In this case, the name and serial number are stamped on the body as well.

Lot's beautiful thumb keys taper to the right, where the top key fits under a tail pinned to the upper rod, to which the Bb key is also pinned, thus giving a Briccialdi Bb. The lower key fits over it's tail, which is connected to the B trill lever (today a Bb trill). During padding the spring broke on the upper thumb key, and had to be replaced. 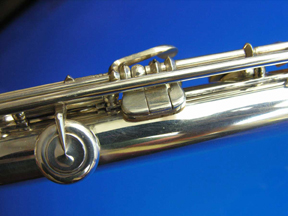 The back clutch is a central element in Lot's mechanism. While the "loop clutch", as Boehm called it, is not unique, Lot's design made it functional. 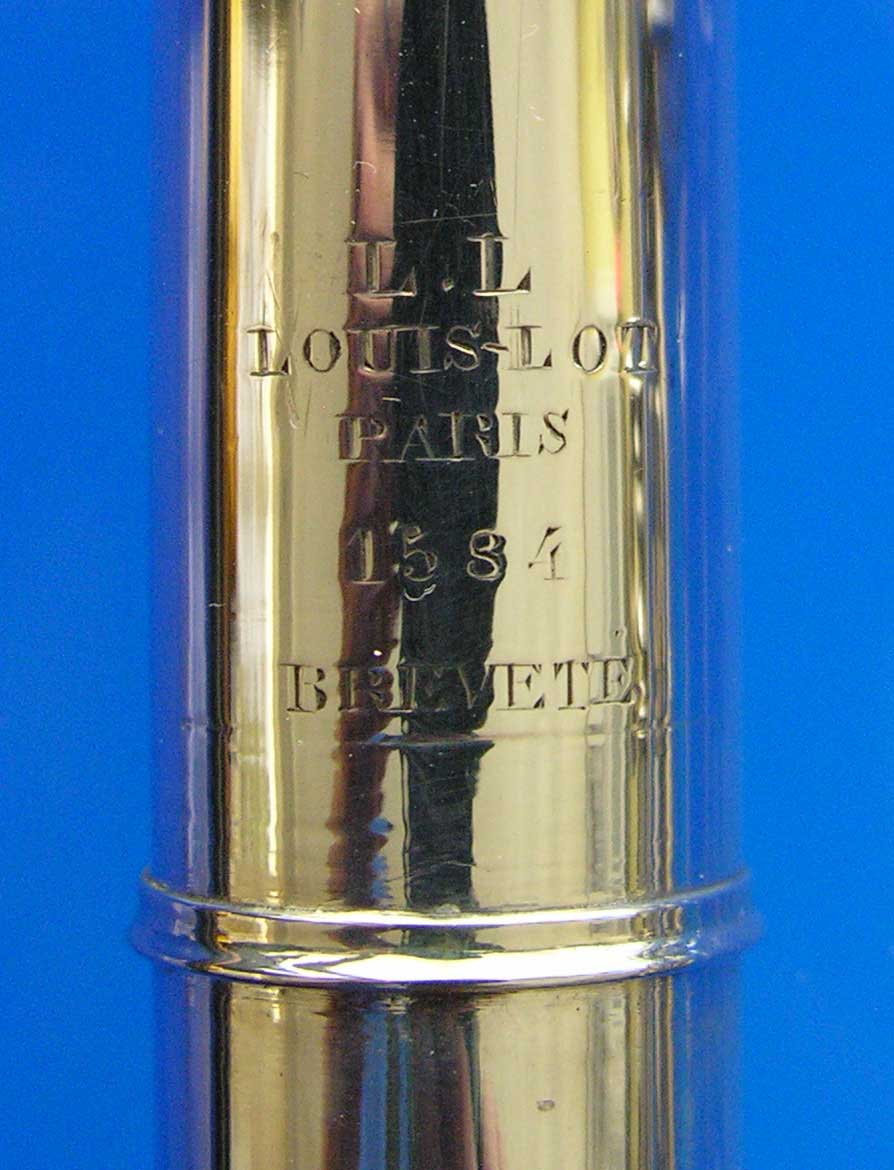 The headjoint is engraved with Louis Lot's personal stamp, which includes a hyphen in his name.

The beautiful tear-drop touch for the D# is another Lot and Godfroy design, abandoned by Lot's retirement. 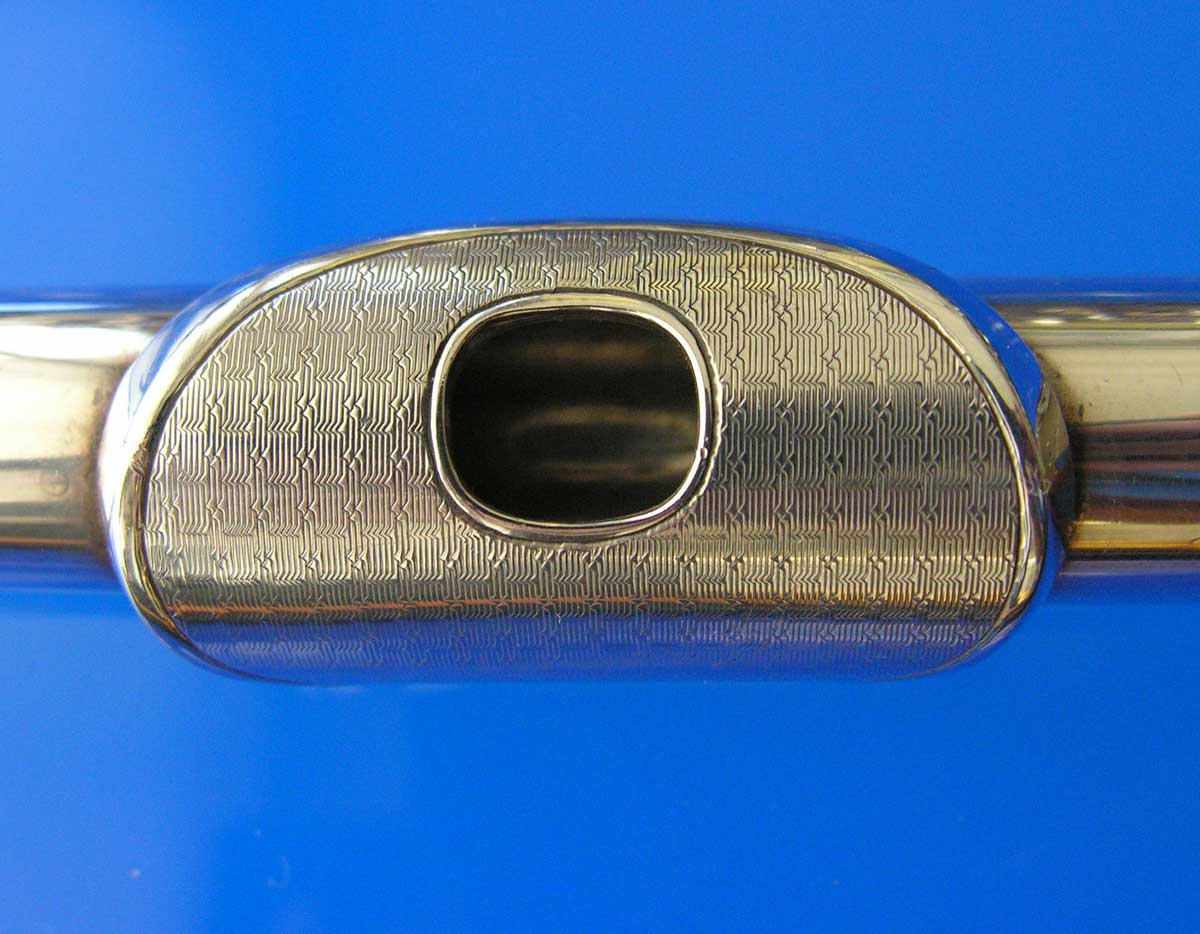 Lot offered guilloch� embouchures from March 14, 1862, when he made a gold one for V�ne of Bruxelles. We do not know if he had a machine in his shop or sent out for his engraving. The pattern would have been cut while the plate was flat. 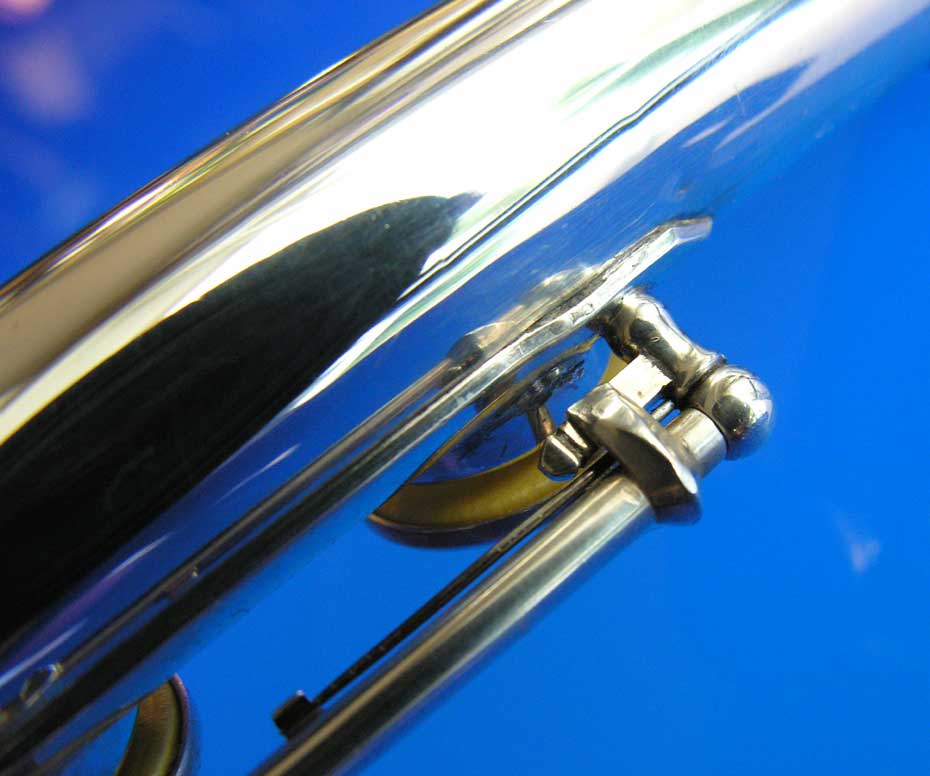 My organological lexicography strains when trying to name the part of this flute used as a stopper for the low C tail. Before, and after, this part was used, the C tail simply extended to the tube. We decided to call this Lot's "obelisk", which seems polite. Lot only used this during certain years. We like to think that it is a "hidden" symbol of the Hermetic cohesion that is Lot's genius. 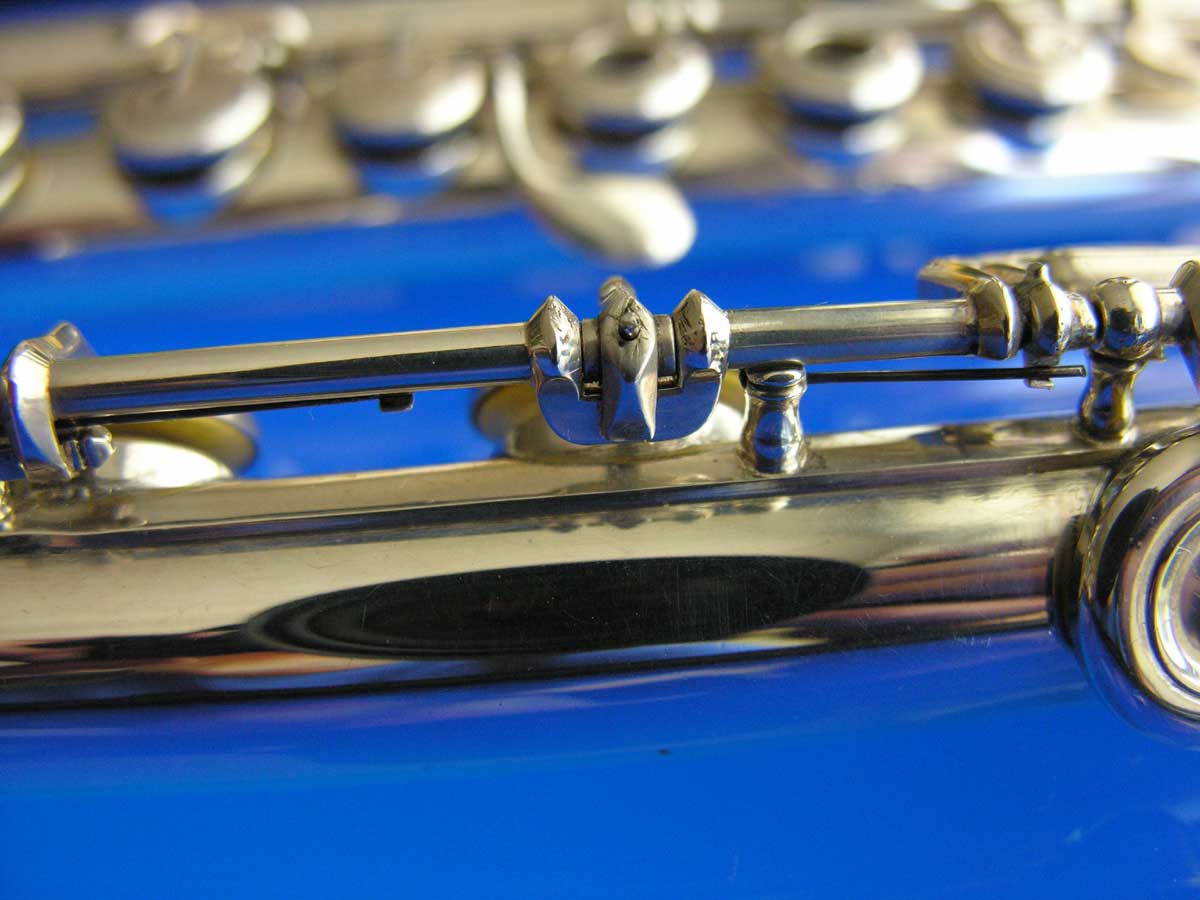 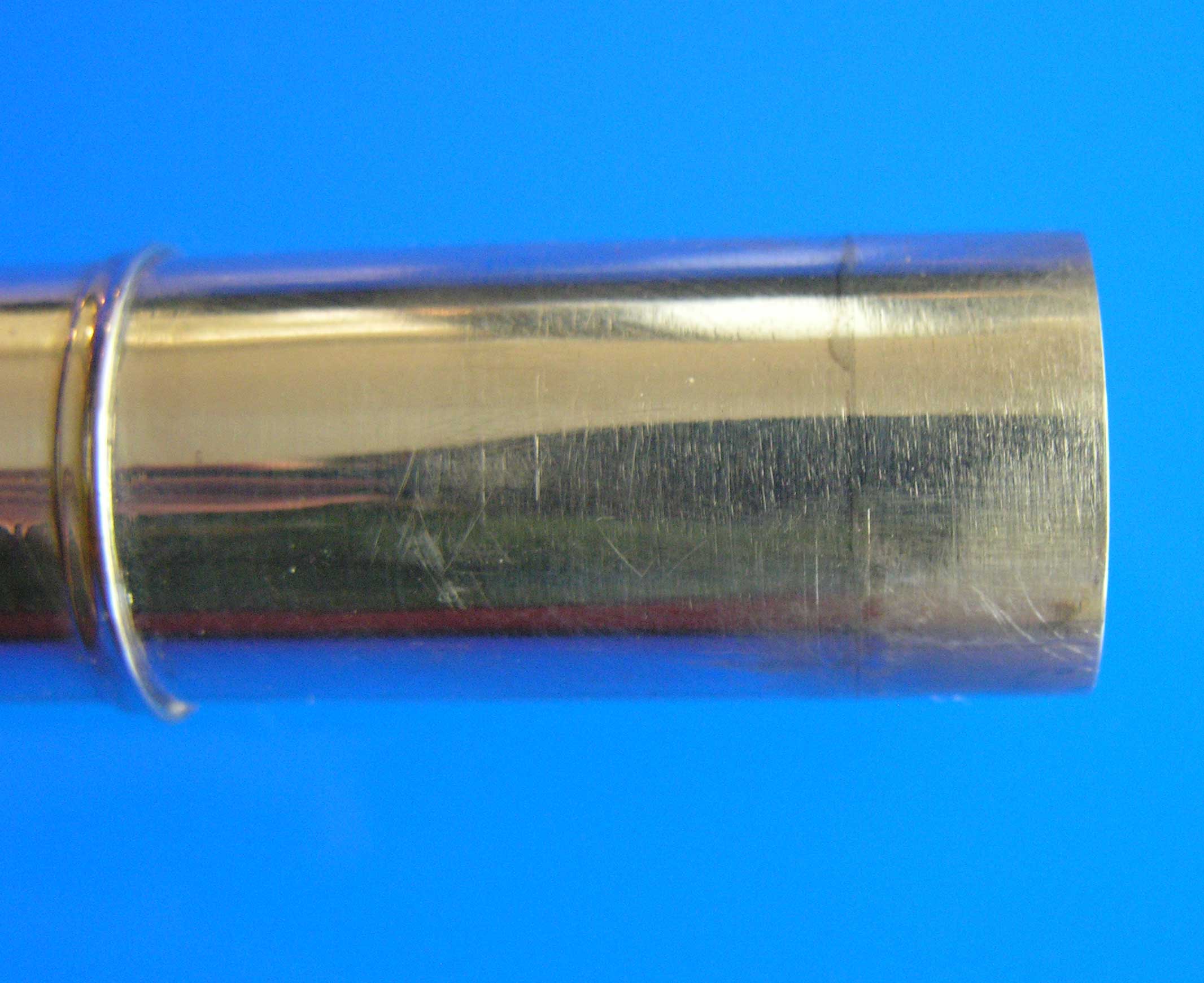 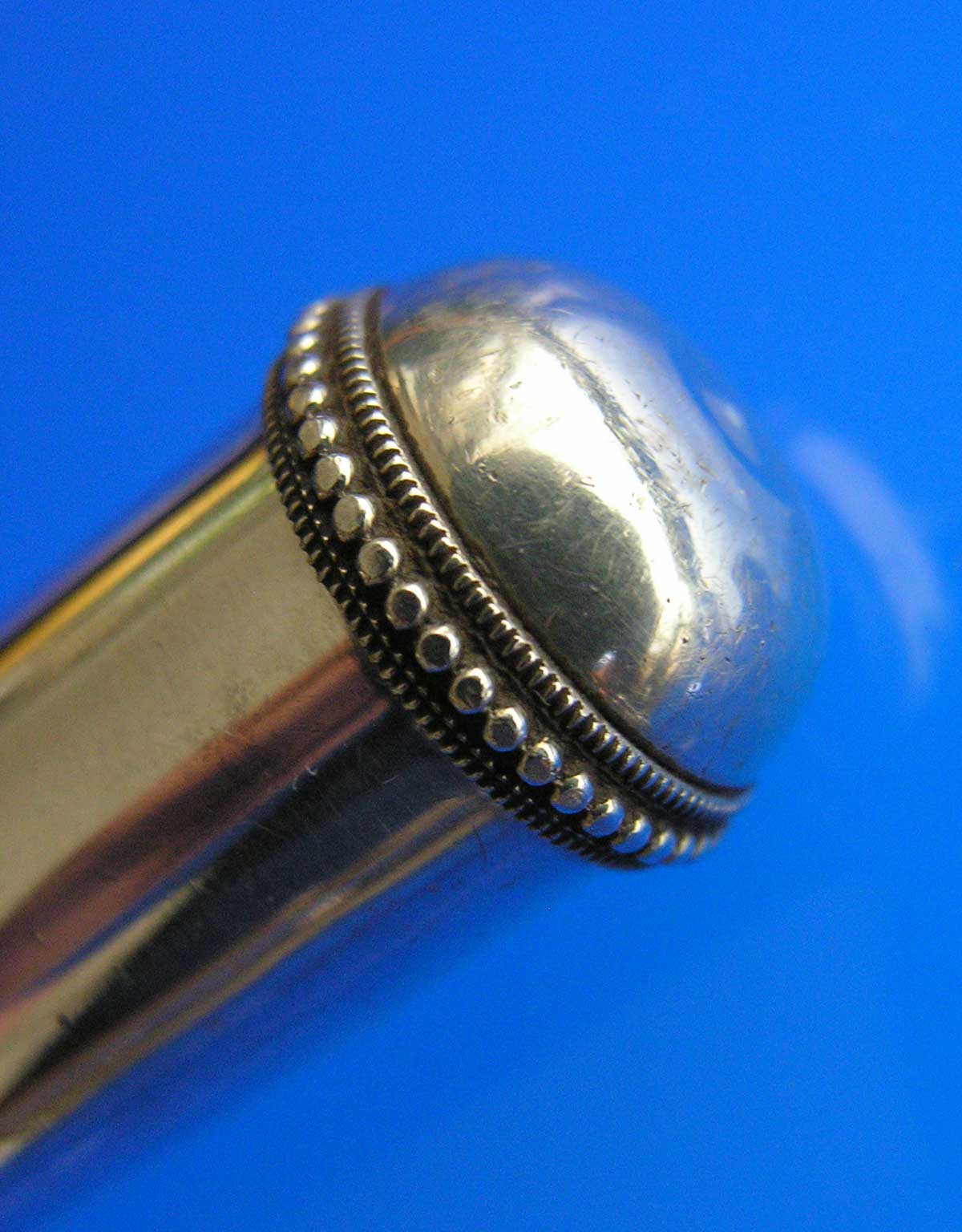 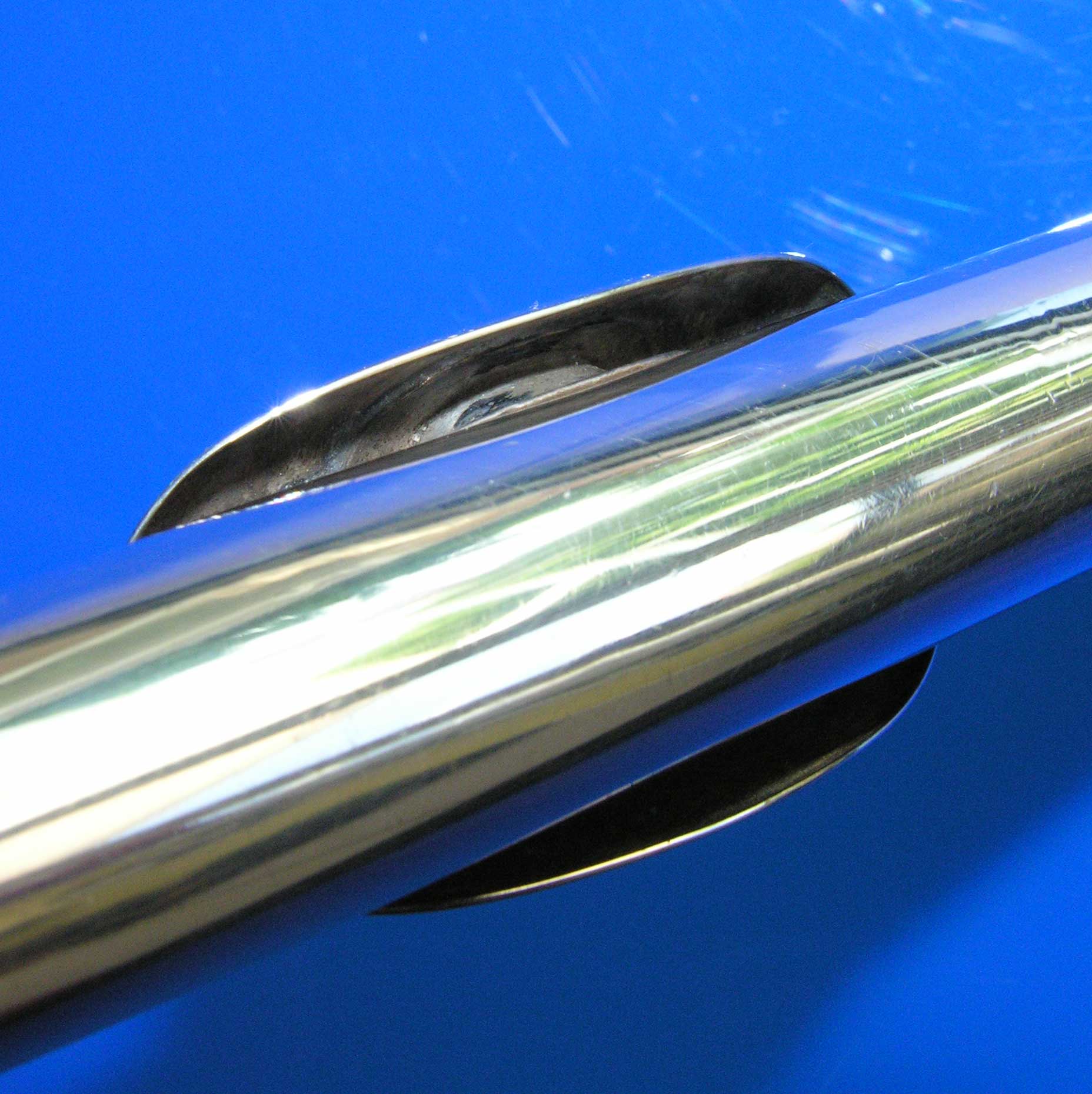 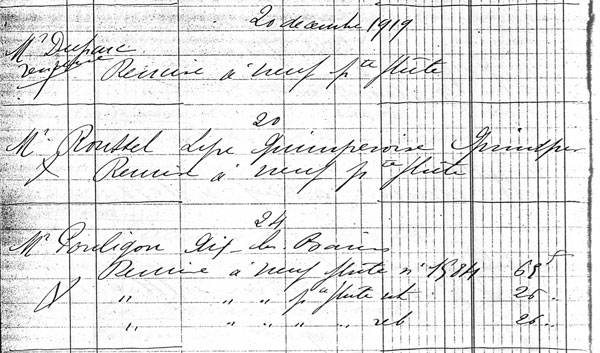 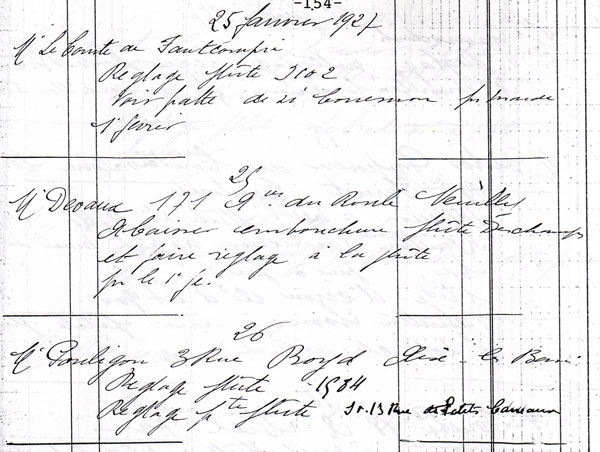 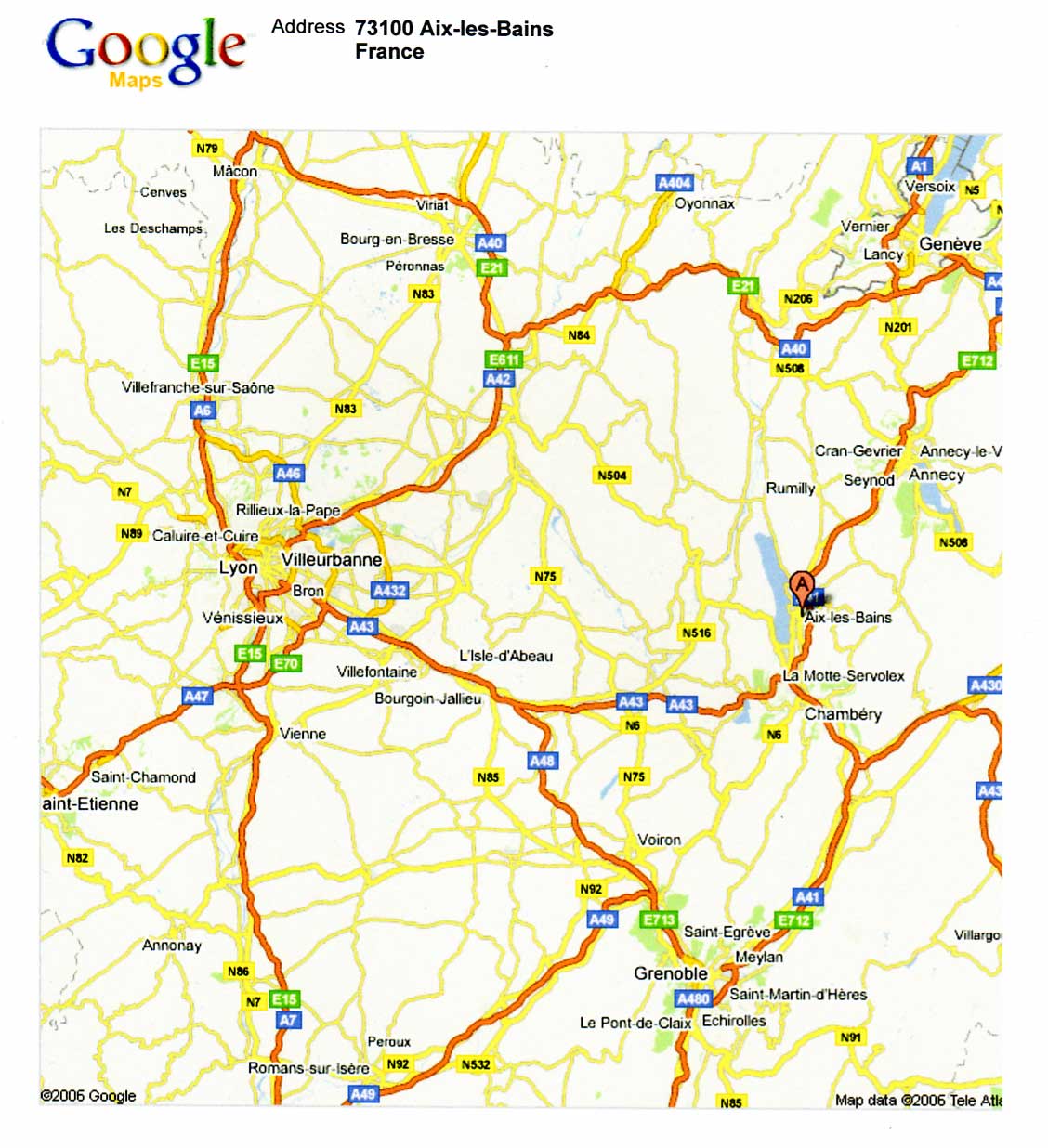