Comments: This is a very lovely flute. It is a marriage between the French and English styles. The mechanism is strongly influenced by early Godfroy designs, including the one-piece strap, the ball-ended thumb key, and the pointed arms. The offset G, high pillars, long arms, and large holes appear to be the influence of Carte's. Robert Bigio wrote the following report on this flute, based on the Rudall, Carte record books. "This flute was made as number 2284 in 1892. The flute was originally made to high pitch (A=452), the standard pitch in Britain in those days. The maker was Moujard, apparently one of a number of French or Belgian workmen brought over by Rudall Carte. Some of these makers settled and stayed (Schumacher, Goulliere and Nivarlet) but a few seem to have returned after a short stay. Moujard was one. (Some of the other names which David may recognize are Soret, Daufresne and Jansen). Moujard would have trained at one of the great French workshops. This is the only flute of his I have seen, and it is a most impressive piece of work. The flute was rebuilt in the 1930s, after high pitch had finally died out. Rudall Carte made a new, modern-pitched body and adjusted the mechanism to fit. They did this with such skill that often the only easy way to tell is that they added a fifth digit to the serial number to indicate the year the transplant was done. In this case, they added a 9 for 1939. (There are other ways to tell the mechanism was transplanted, if you know what you are looking for.) I gave the flute to Brian Clover, a former Rudall Carte employee, to overhaul. Brian was apprenticed at Rudall Carte in the 1950s. It is possible that the flute will need some adjustment after a couple of years in a radically different climate." (Robert Bigio, private correspondence). As far as playing goes, this flute has all of the extraordinary tone of the English flutes at their best. The tuning appears to be excellent, at A=440 or a tad higher. The response is professional, if not quite as rapid as the fully thinned flute.

System: Full Boehm system, with C foot. Covered tone holes; offset G. Headjoint thinned, with raised lipplate, and fully lined with silver (?) tube, Body and foot not thinned, and footjoint socket also lined with silver(?) tube; this one about 4 cm long, extending around and past the D# hole. This instrument has been rebuilt at Cartes in 1939; presumably after that time the trill was changed from B to Bb. The strap is one piece, and the footjoint uses the old pinned design with back-clutch. The keys were used on a new body in 1939, built to A=440, instead of A=452 as the flute had been originally (Bigio). This conversion included fitting two pieces of silver in the strap, lengthening it by a full 9 millimeters (one is 5.8mm, the other 3.2mm).

Condition: The condition of this flute is very good, notwithstanding a few hairline cracks where the tube is lined, in the head and foot. The conversion of the trill left more sign of activity than the complete rebuilding in 1939, suggesting this was done later.

Case: In Carte case, probably from the 1939 rebuild. 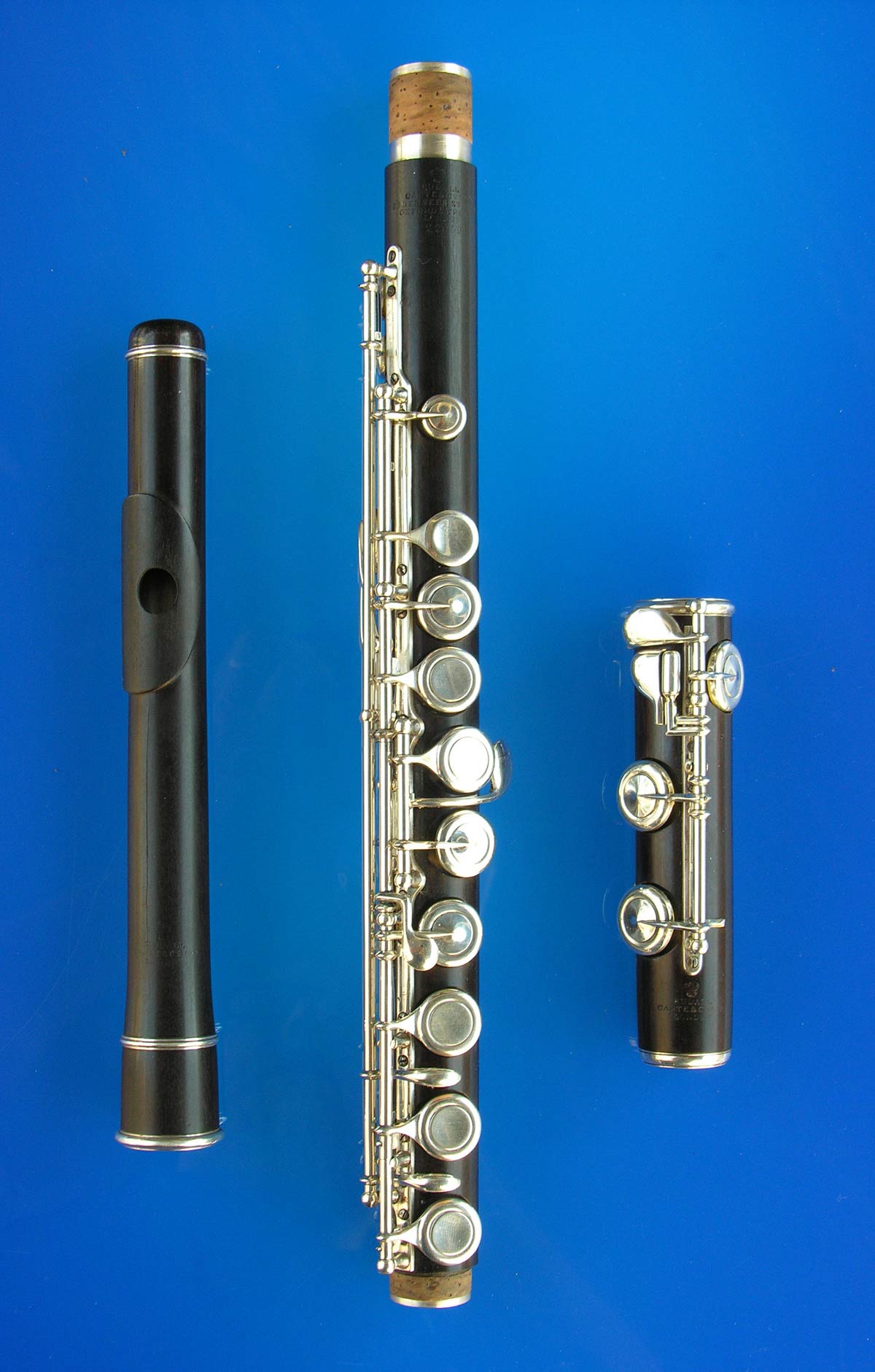 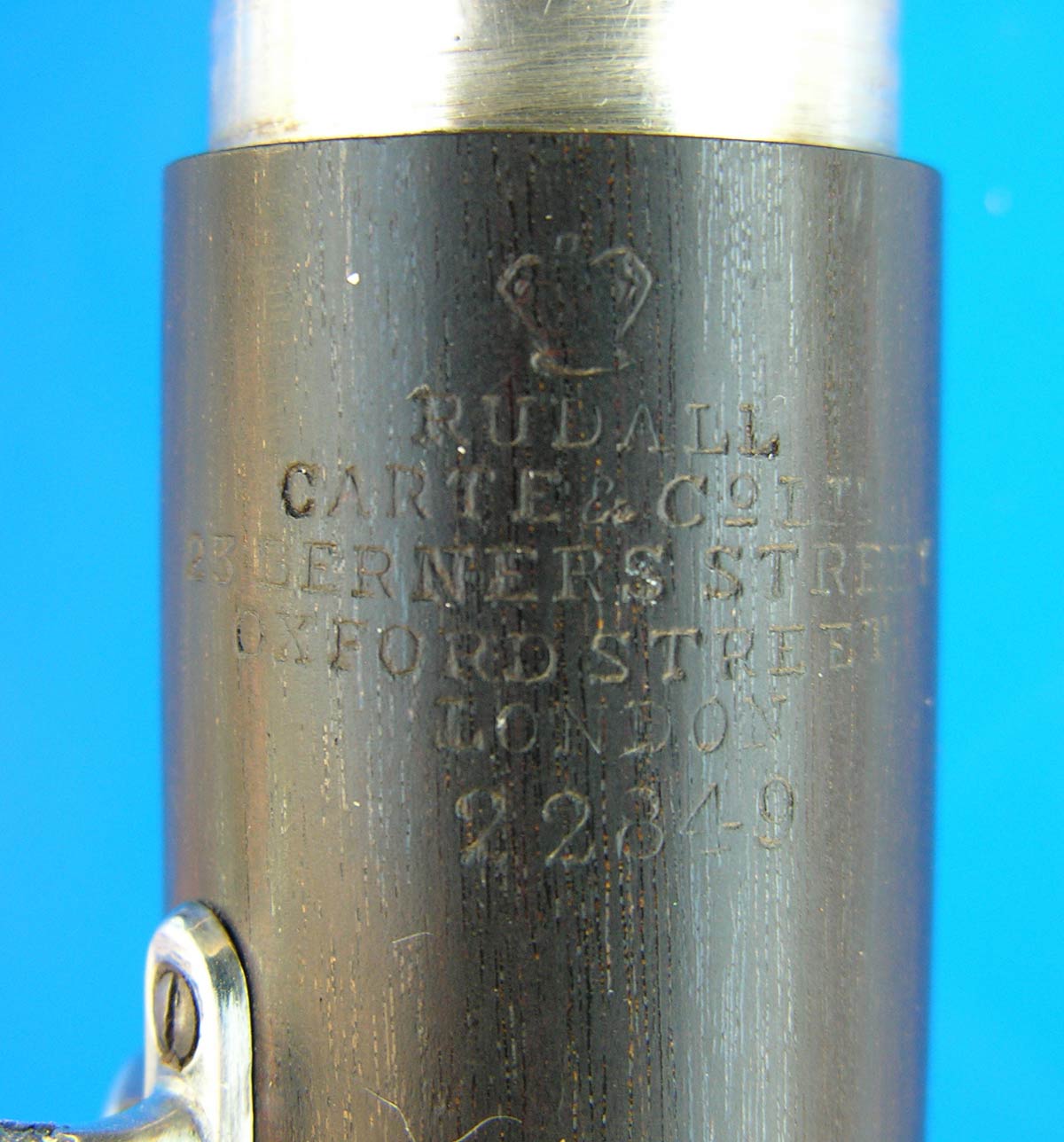 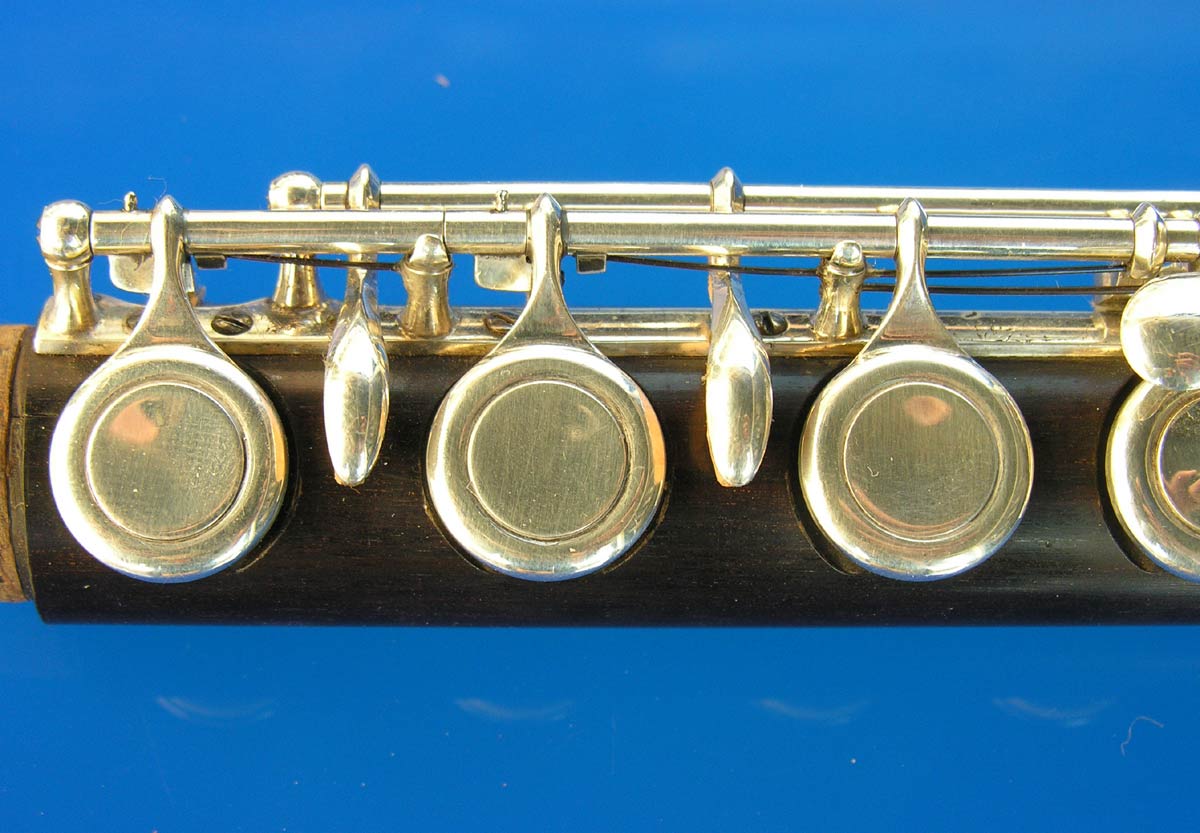 The mechanism was made by Moujard, a French or Belgian flutemaker employed at Carte's (Bigio). The instrument is a beautiful merging of English and French taste. Here we see the shoulder clutches at the right hand, which would have been an elegant anachronism in Paris in 1892. 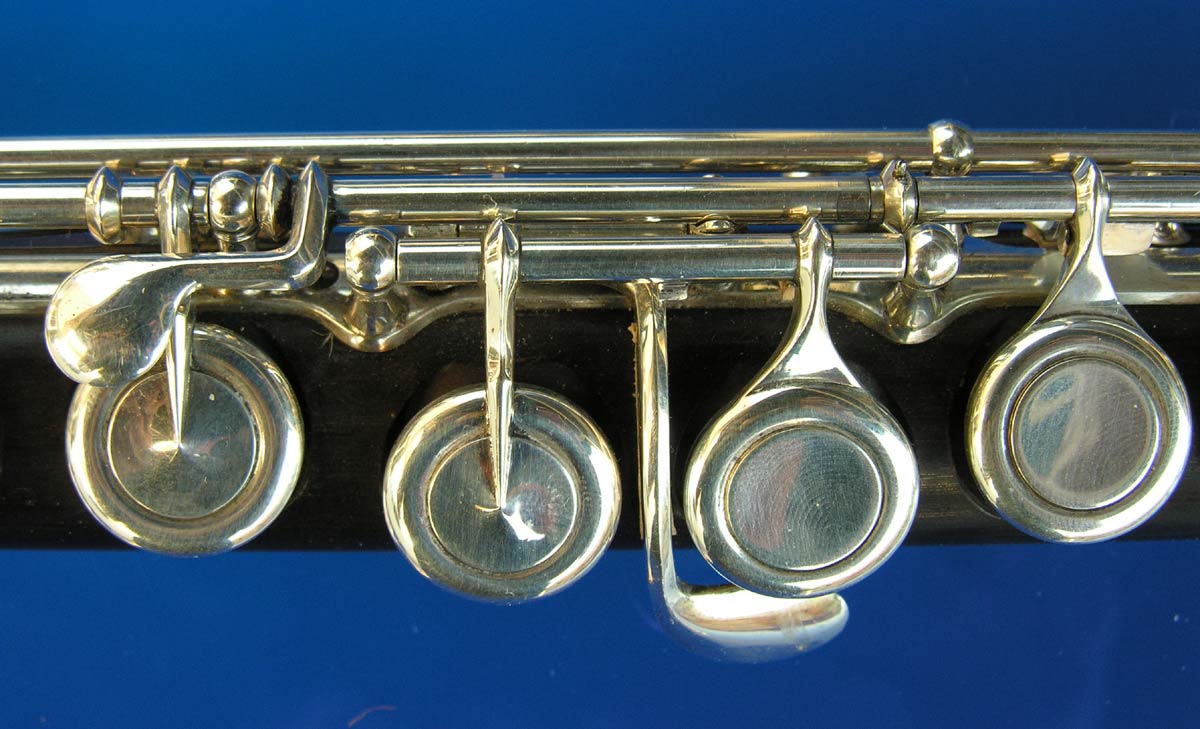 The offset G was not used in France, but it was popular in Germany and here in England. 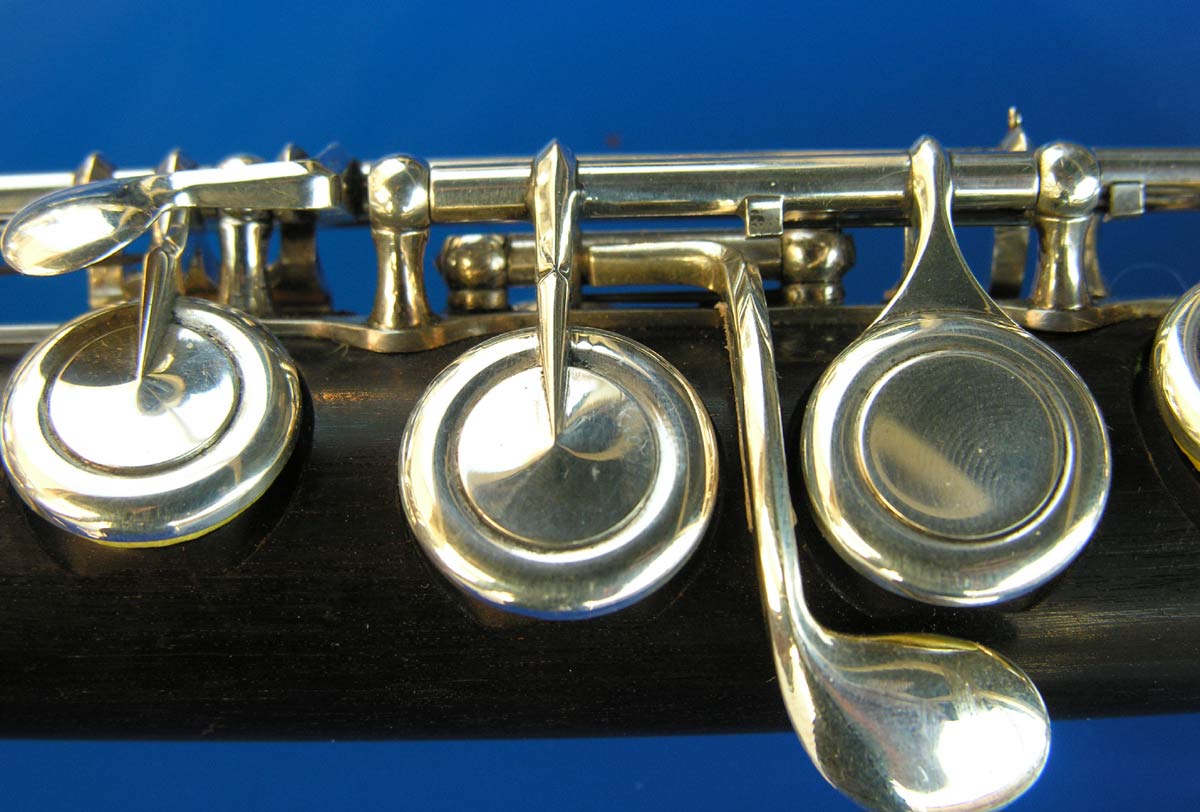 Here we peek under the offset G to see the side G# and the delicate G# touch. 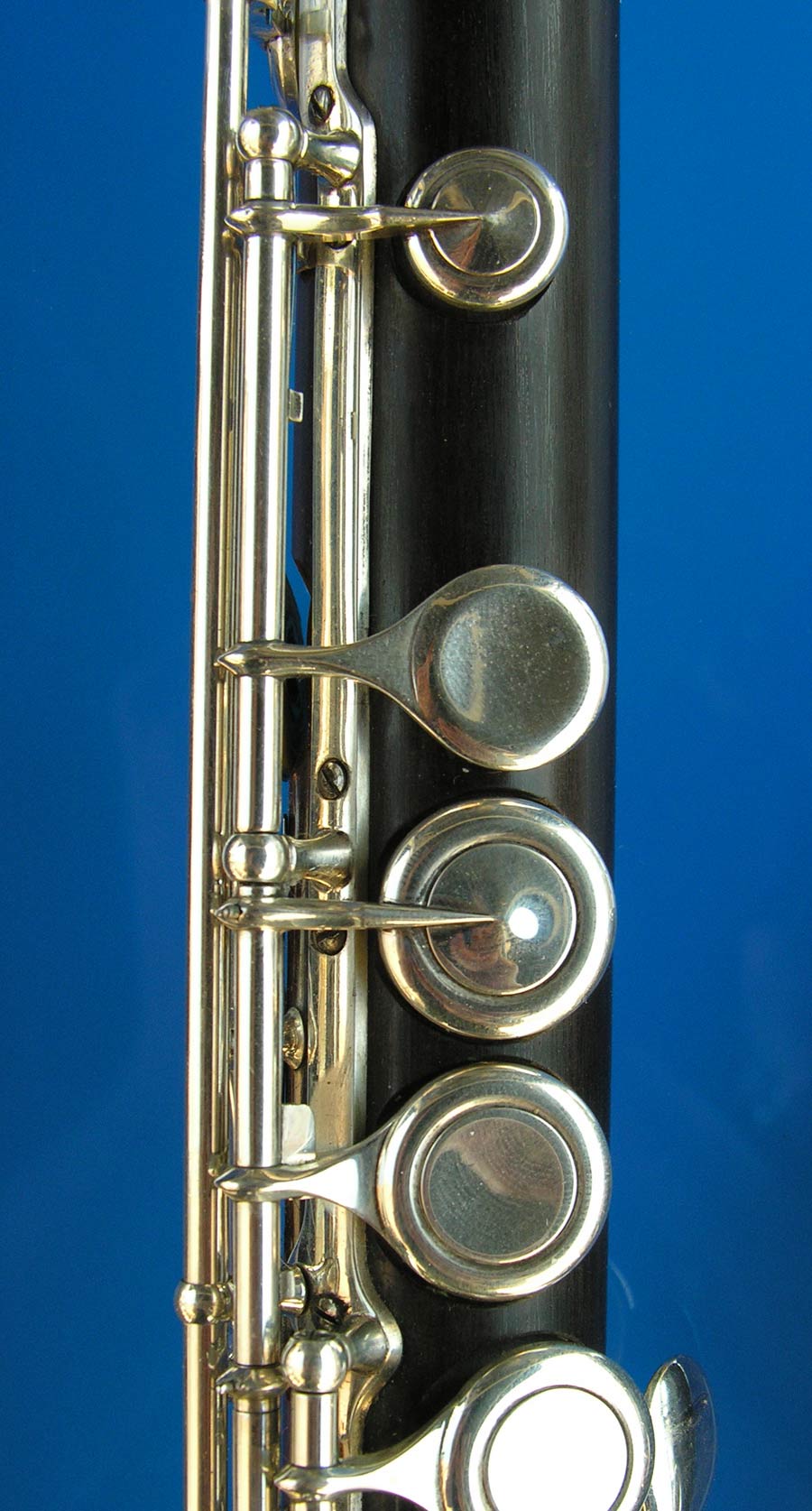 The footjoint uses Lotfroy's original pinned foot with back clutch. I think Rockstro may have suggested the flat side of the D# touch. 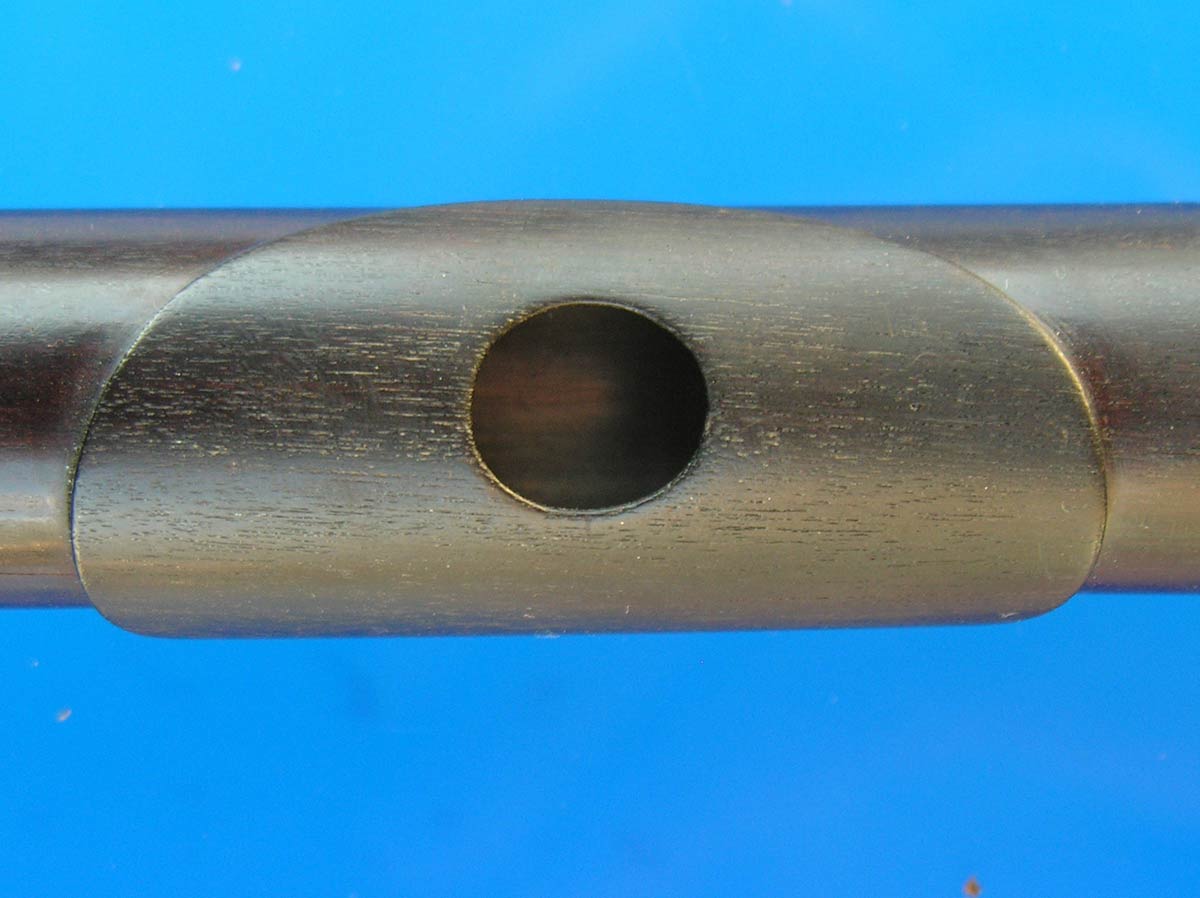 The wooden headjoint is cut down around the lipplate, giving the thinned headjoint. Thinning the head gives brightness and quick response. The oval embouchure is classic English. 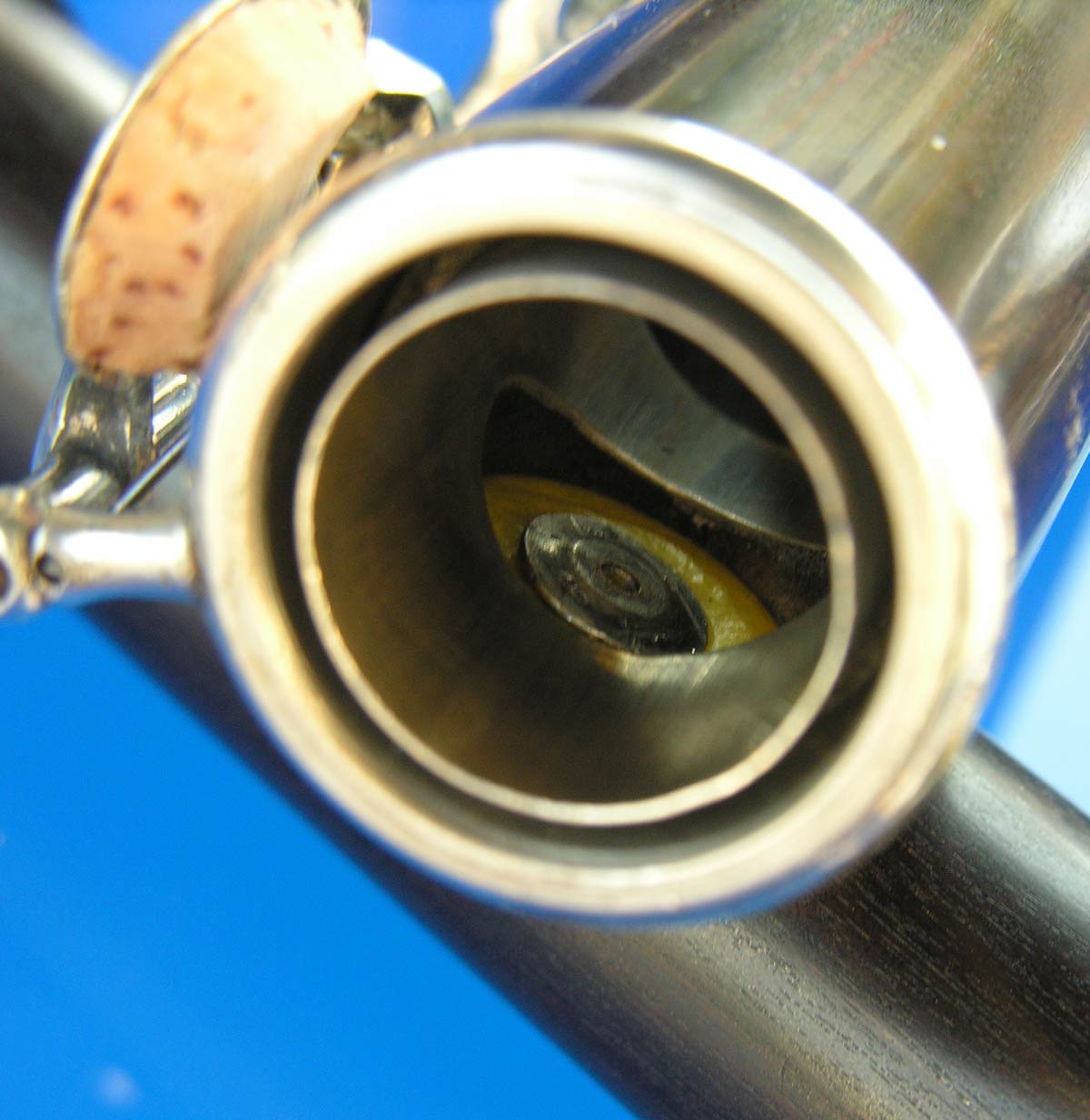 Looking inside the footjoint socket we see the silver slide surrounding the D# tone hole.