Marks: No marks under keys.

Manufacture Date: Made c. 1815-1825. This is an estimate based on the characteristics of the flute. The maker's mark was first used by Stephan Koch (1772-1828), who established the workshop c. 1807 (Langwill). Stephan was a master turner with citizen's rights by 1815. In 1820 he "sought privilege for newly invented flute" (Langwill), which may well have been the flute to low G which is illustrated in Georg. Bayr's Tutor of 1823. Stephan died in 1828 and was succeeded by his eldest son Franz (1794-1859). Franz in turn was succeeded by Stephan Jr. (1809-?). The last directory listing was 1866. This flute appears to be from the first period of the Koch workshop, when Stephan Sr. was proprietor; conceivably it could have been made shortly after Stephan's death in 1828, but this seems unlikely given the early keywork. Probably the short F key was changed by Franz early in the 1830's.

Comments: This fascinating flute appears to show Viennese keyed flutemaking in middle-youth. The low B is made with an attempt to involve the right thumb. The G# is cut at an angle, apparently to bring the hole up from the bottom of the flute to avoid moisture. The keys are cut out of sheet silver, and the round tops are not always precise. The silver itself has not been hardened as later keymakers would, and the long keys are somewhat flexible. The tone holes are placed for finger position, and curve around the top of the flute. The tone holes are undercut individually, and finished with a cutter. The E hole is angled down the flute. The overall effect is that of a flute made by a master, whose playing qualities superseded finesse in the finishing, and whose work is innovative. The instruments sounds wonderful. The notes are even, and in tune. The low D is very strong.

Material: Made of boxwood, with ivory rings. Keys of silver. Pad seats of brass inset into body. Brass lined shoulders for all keys, except the three articulated touchpieces on the foot. Headjoint fully lined with brass sleeve. Cap and corkscrew ivory, but threaded part of cap made of dark wood, like cocus(?). Joints covered in cork. Springs originally of brass; new steel springs on low C, C#, and B, and on long F.

System: This is a nine-keyed flute, with foot to B. The headjoint is fully lined for a tuning slide. The low B key is operated with a long key under the flute for the right thumb. The G# key is a short key on the midjoint. The low C key has a vaulted shank over the C#. The high C key is fitted in very long shoulders. The short F key appears to have been fitted later; the shoulders are inset, not integral, the brass pad seat is slightly different than the other brass seats (it has a small lip on the top), and the key does not seem to have the same square hole for the spring rivet as the other keys. There is a filled-in channel across the surface of the flute, between the F keys. Possibly there was a different arrangement for the F originally, with just one hole for the two keys. The embouchure is rectangular with rounded corners, and appears unaltered.

Condition: The condition of this flute is excellent, notwithstanding evidence of considerable usage. The headjoint is nearly perfect, having only a small hairline crack in the very thin wood of the barrel slide. This slide still has what appears to be the original red coloring in the tuning graduations, which can also be faintly seen in the cork projector. The midjoint is without cracks or blemishes, yet it is conceivable that it was injured or shortened slightly at the upper tenon, which does not have the same little inner bevel as the other tenons, and the rings for the cork wrapping go higher than one would expect. The keys on the midjoint all look good. The spring is replaced on the long C. A very interesting technique used by the maker was to cut square holes for the spring rivets. The original rivets are on the Bb and G# keys, but the C has been fitted with a new spring and rivet (with a round hole). The heartpiece is lovely and crackless. The spring is new on the long F (with a new rivet, but the old square rivet is still visible). This key is unusual, having a sharp angle at the bottom to bring the pad over the hole. Furthermore there is a pointed arm on this key, unlike the usual stubby ones seen on the footjoint. It seems possible that this flute was originally built with an experimental F set-up, based on the one-hole two-key design of Tromlitz. In this case the short F would have to have had the pad, and been seated in brass shoulders fitted into the channel. The long F would have slipped under the short one and lifted that key (the position of the tone hole directly in front of the channel, and offset from the long F key, makes the original pad necessarily on the short key). The protruding brass shoulder would have been ugly and possibly unstable. When the decision was made to build another hole for the short F the current shoulders were fitted, and a new key made. The long F key was rebuilt to angle down to meet the tone hole, although the original shaft remains (with the square rivet hole). The short F key looks slightly later, and does not have a square rivet. This adaptation was done with great skill. The foot joint is also in excellent condition, with no cracks. The springs are replaced on the C, C# and B keys, with round rivets. 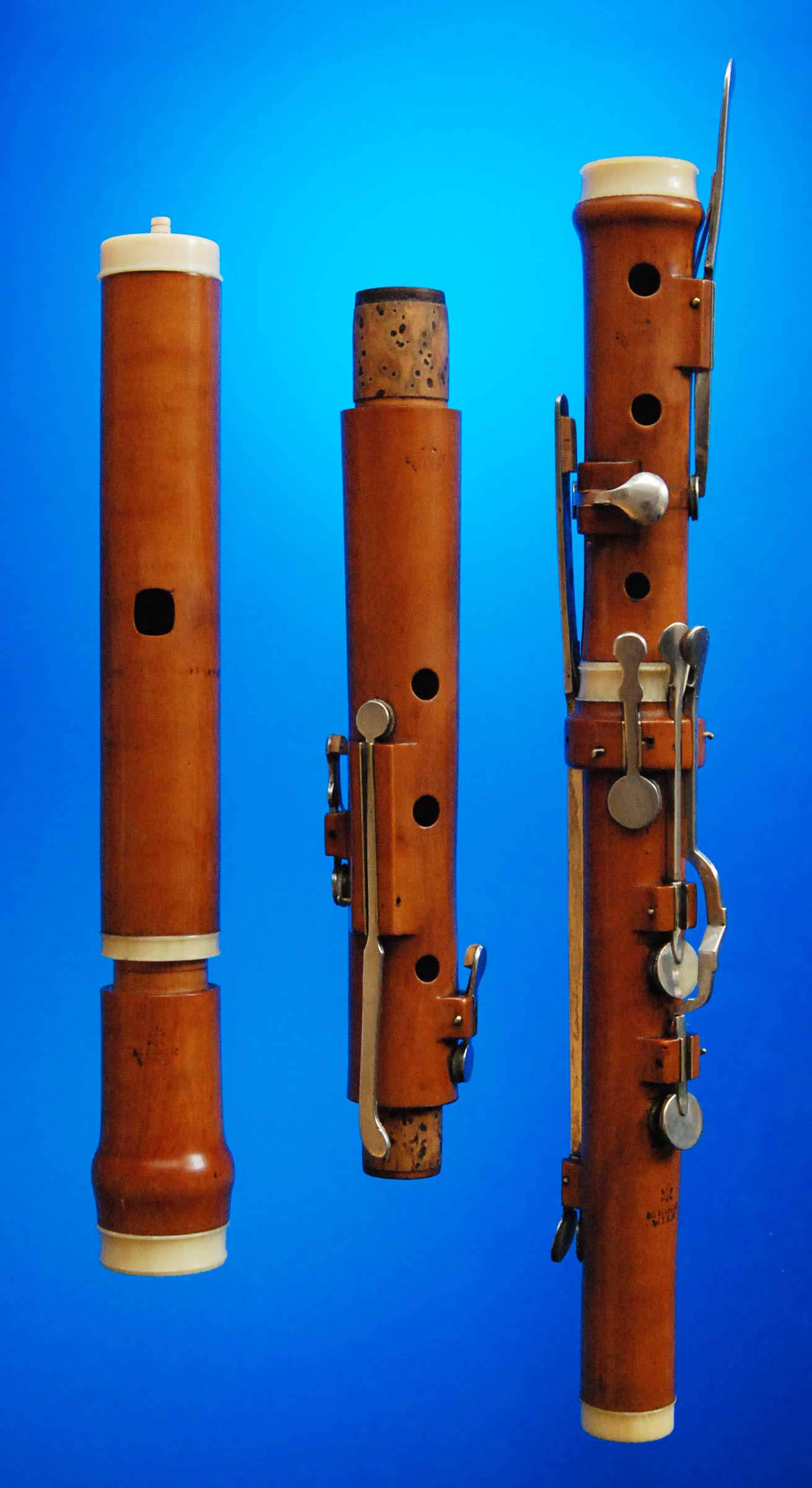 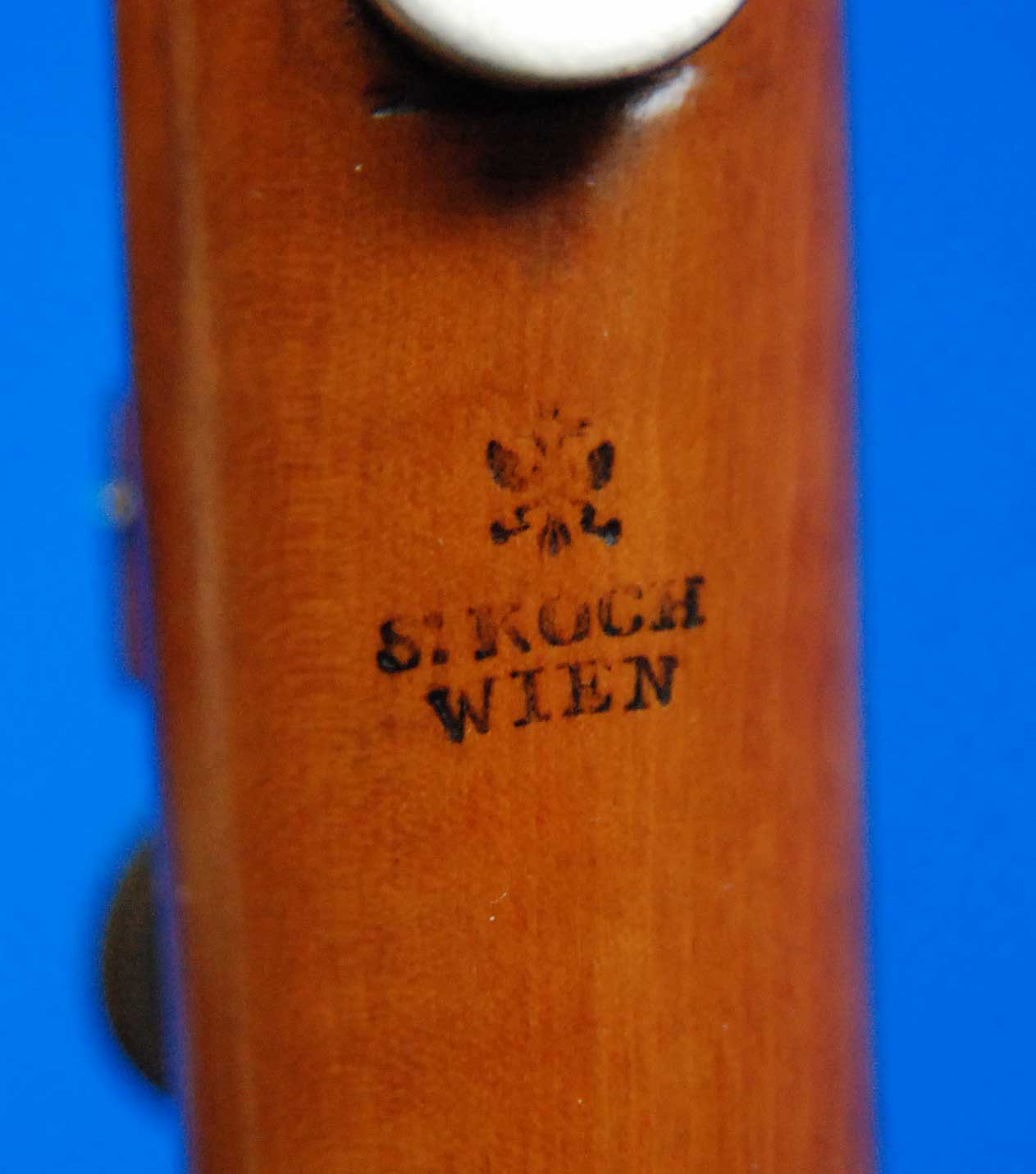 Stephan Koch died in 1828, at which point his son Franz took over. We believe that Stephan built this flute, possibly back in the teens. 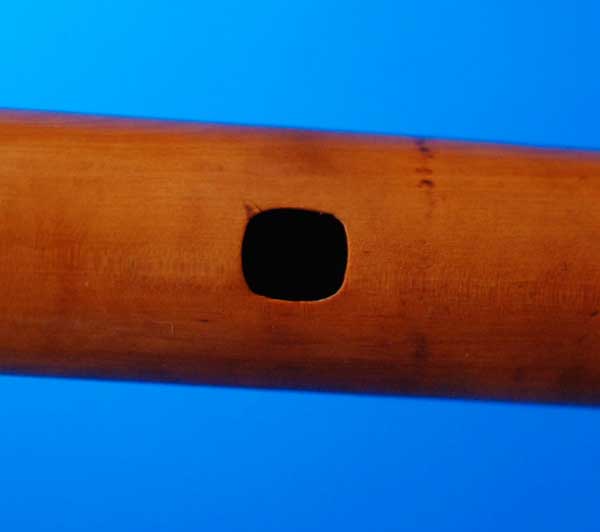 The Viennese liked square embouchures. Curiously, Koch also made a square hole for the spring rivets on the keys! This flute has a strong and wonderful tone, which speaks well for the well-speaking square hole! 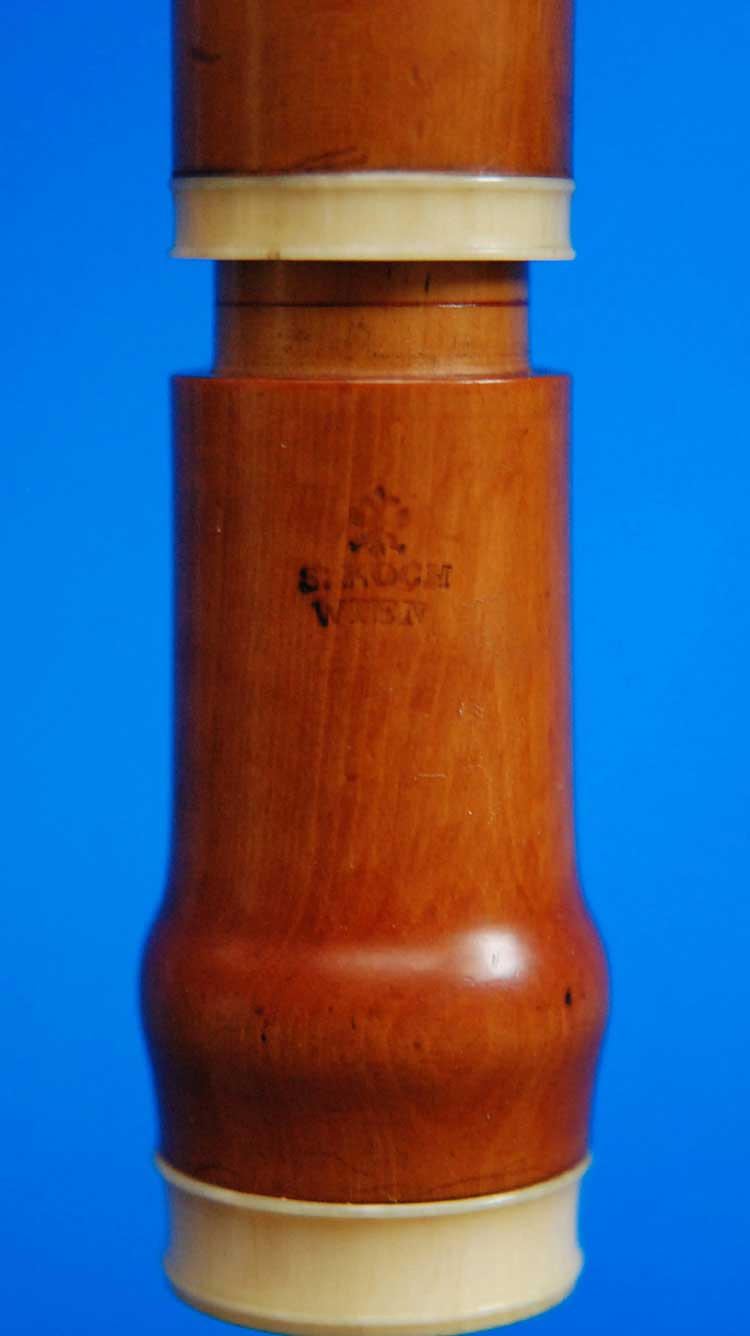 The tuning slide is very clean, and the headjoint is fully lined. The turning is lovely, and the boxwood is beautiful.

The Bb, C, and G# keys. The keys appear to be cut from flat silver stock. The keyed holes are lined with brass inserts, which extend above the body.

The marvelous footjoint with the thumb-operated low B. The short F key looks slightly newer than the rest.

This rear view gives the low B lever, operated by the right thumb. This flute was made before the keymaking skills had been perfected, including hardening the silver. There is a lot of spring to this key! 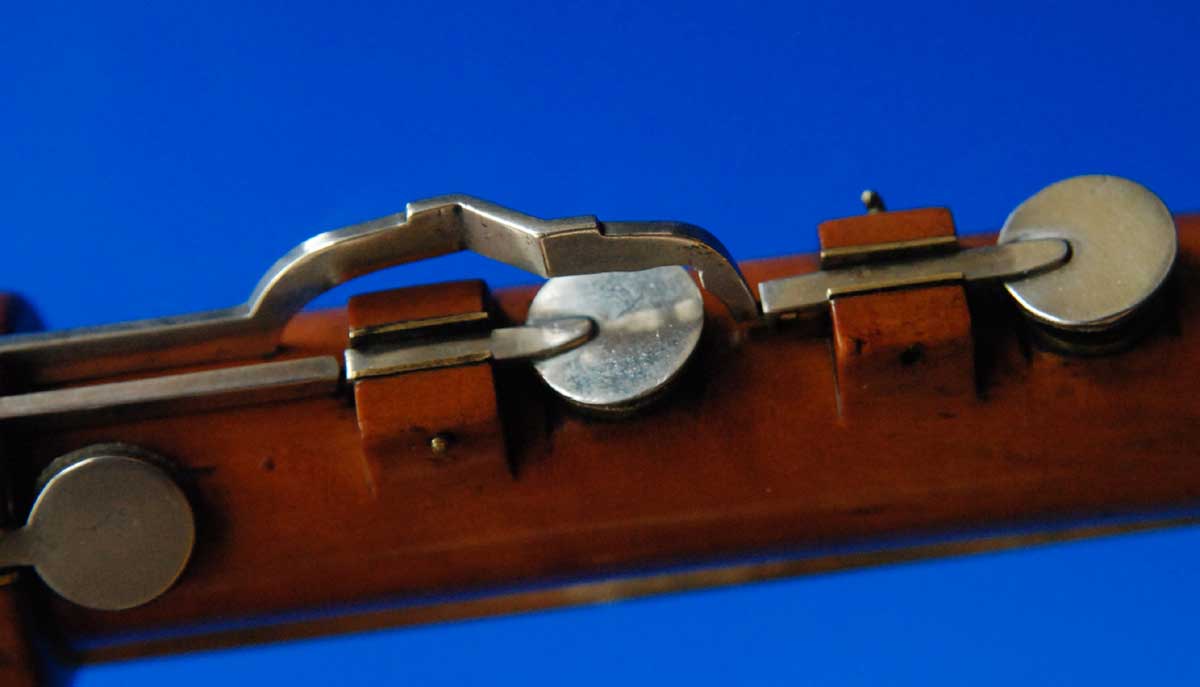 The footjoint keys use the vaulted C shank introduced by Richard Potter in 1785. Potter abandoned it within a decade, and we seem to be seeing the Viennese undertaking the same process. 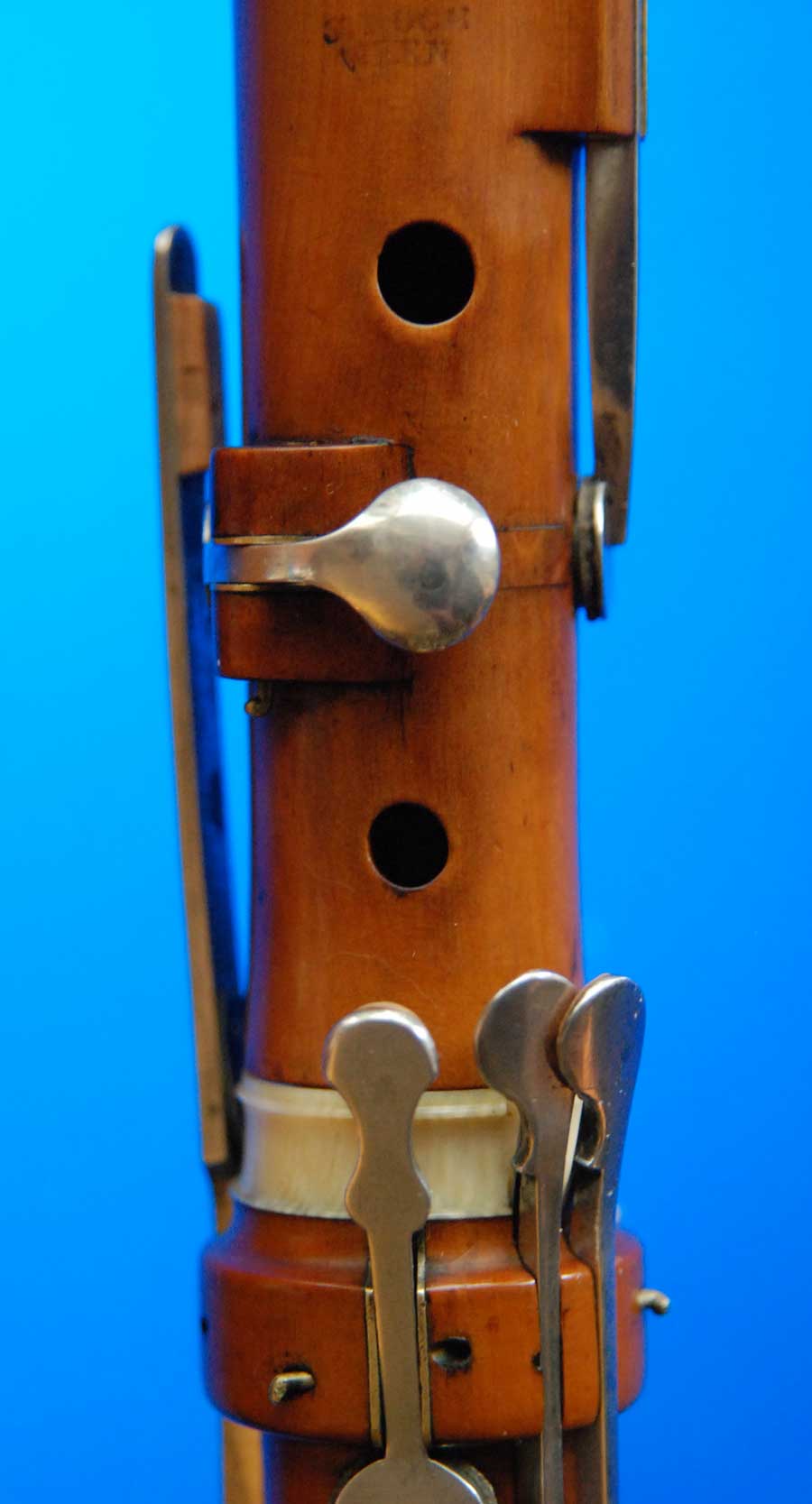 Something happened around the F keys. Apparently the initial design was changed. Probably the "one hole two keys" was tried and abandoned. The short F shoulder is masterfully grafted, and a channel filled. The key looks newer than the other keys as well. It looks like a Koch job, possibly by Franz. 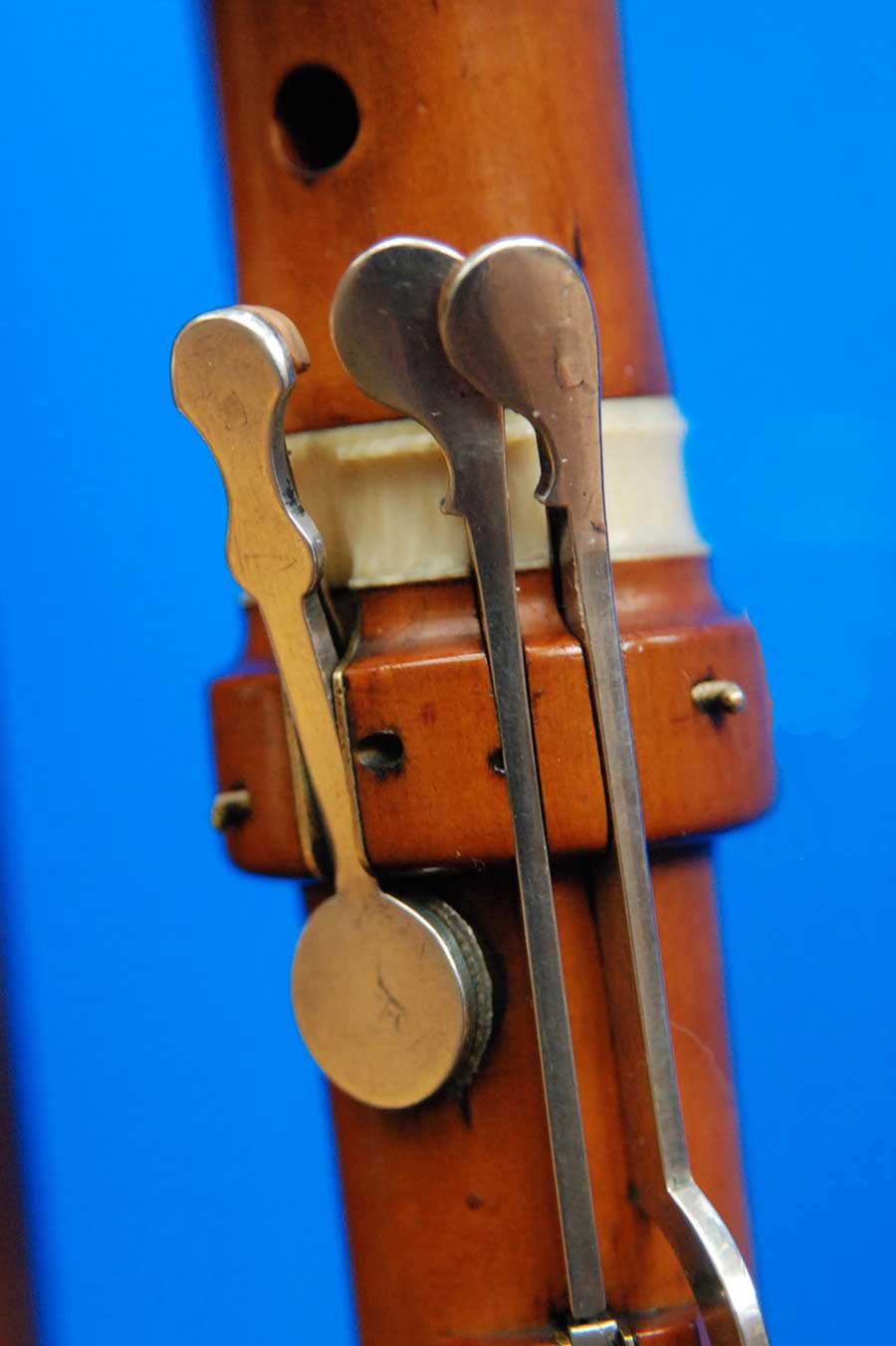 Richard Potter also put a dimple on the C and C# touches on his early flutes, and it looks lovely. The Koch dimple is of course slightly different, but equally as charming. 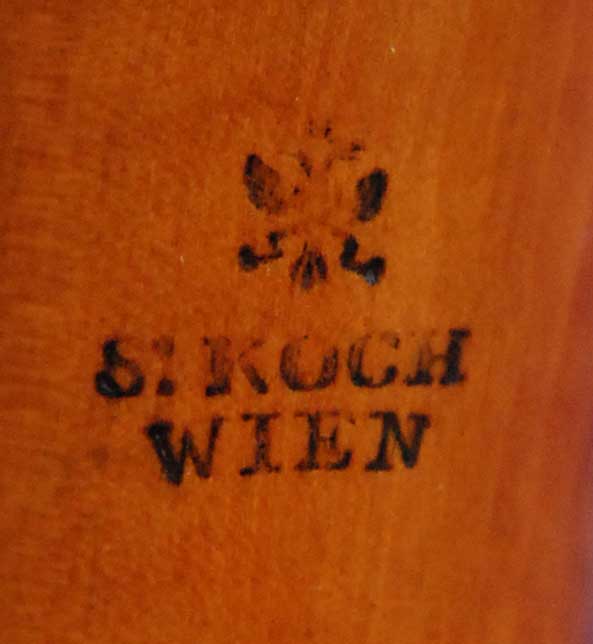 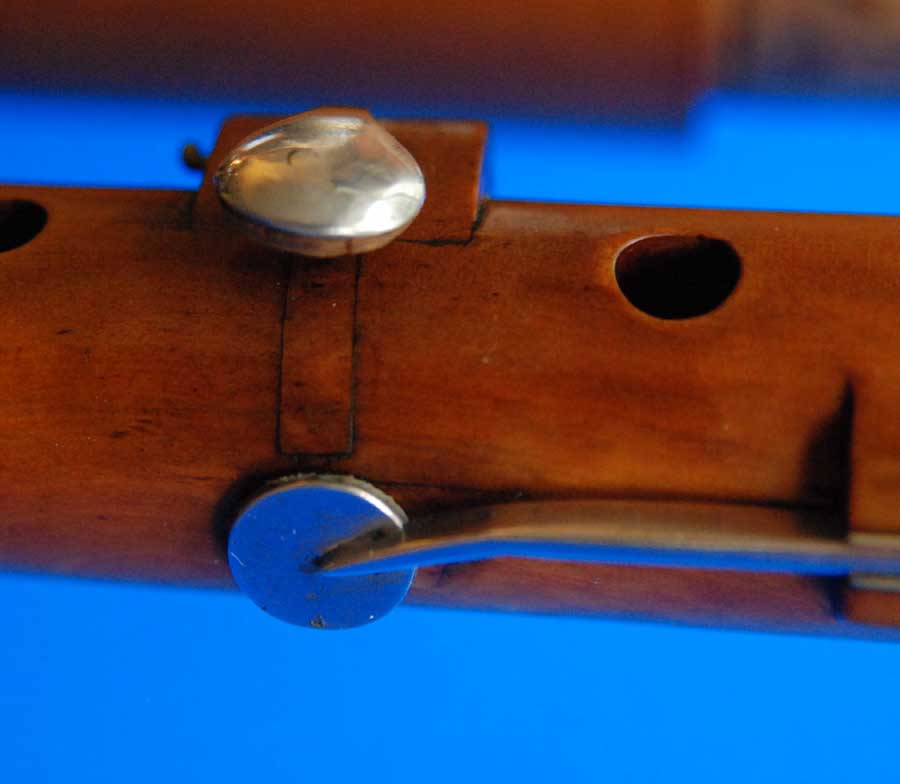