Manufacture Date: This beautiful, early French flute could possibly have been made by Bour, who moved from Paris to Chicago around 1890 (Berdahl). It certainly was made in France, however, and bears many qualities of the very early cylindrical flutes, joined with much later innovations. This flute's clutches were first used around 1865. The one piece strap was abandoned at Lot's after 1876, but continued at the Godfroy, Bonneville, and Rive shops. The pinless footjoint with round D# was a favorite of Debonneetbeau, yet eschewed by Bonneville and Rive. Shall we suggest 1875-1885? These were the years when production of cylindrical flutes spread out from the original shops of Godfroy and Lot, and this strange combination of components was occurring, yet while flutemaking was still considered sculpture.

Comments: This is a lovely open G# flute from the early days of the cylinder instruments in Paris. The wood is beautiful, the keywork exquisite and untouched by buffer or wear, the embouchure rustic and rich. This instrument is unusual for several reasons. The open G# is rare among French flutes. The design is very close to Godfroy, yet the mechanism is made with a more precise, almost industrial flair.

Material: Made of "Portuguese Grenadilla", if I am correctly interpreting Lot's own descriptions of this wood, with the original finish intact and lovely. The keys and trim are of silver-plate. The corkscrew is of turned wood, silver capped. Pads appear original, or close to it, and get cleaner further from the blow hole, suggesting tobacco use. Pad washers of white metal, oddly they are dimpled asymmetrically. Springs of blue steel. Everything is as new, with two exceptions noted below.

System: This extraordinary open G# flute is an enigma. It is built to high, but not the highest, standards, and it marries some old and also some innovative features. The flute is a French model, yet with open G#. The trill is the later choice, to Bb. The thumb is standard French. The foot is to C. The tone holes are not graduated. The foot is Lot's new pinless design, without backclutch.

Condition: This nearly mint-condition flute would only be marred by a typical barrel crack, and a missing pad washer for the open-holed F key, were it not for the possible internal adjustment of the embouchure. Invisible from above, and in fact possibly original, the embouchure walls are simply too close to vertical for my taste, so I am assuming adjustment. Although I call this flute is a bit brasher of sound than originally intended, she is nonetheless a beautiful flute, in practically unused condition.

Pitch: Pitched nicely at A=440; probably even more nicely a tad lower, but all the way in the base is definitely 440.

Case: The case appears original, and includes the wooden cork grease container. The leather is dried out, and the top is separated. Under the cloth of the top is the penciled name, "L. Blot" Langwill lists a "Blot" as active in Paris around 1836-1839 at rue du Bac 38, a specialist in flute and bassoon; perhaps he moved on to casemaking. 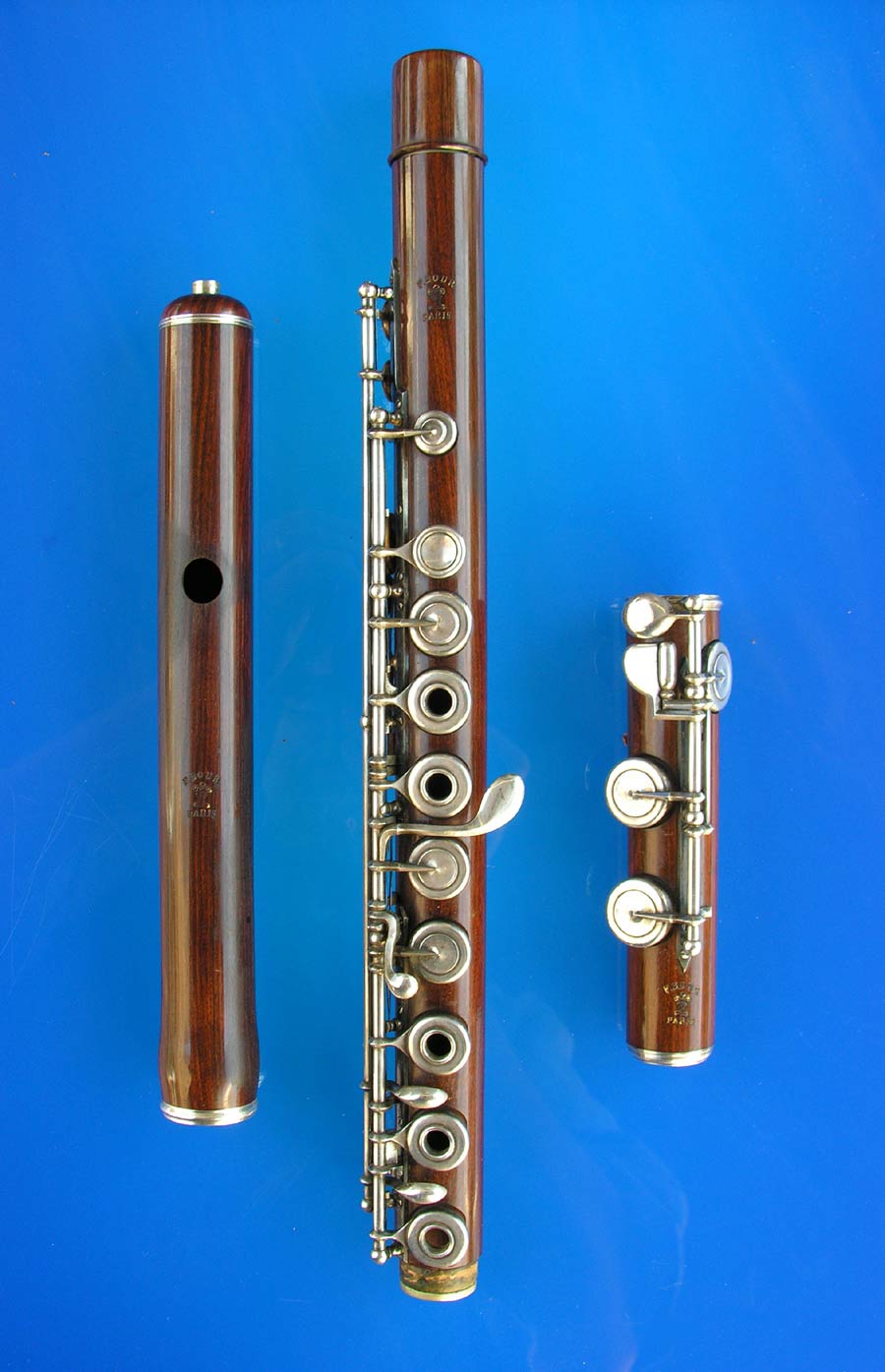 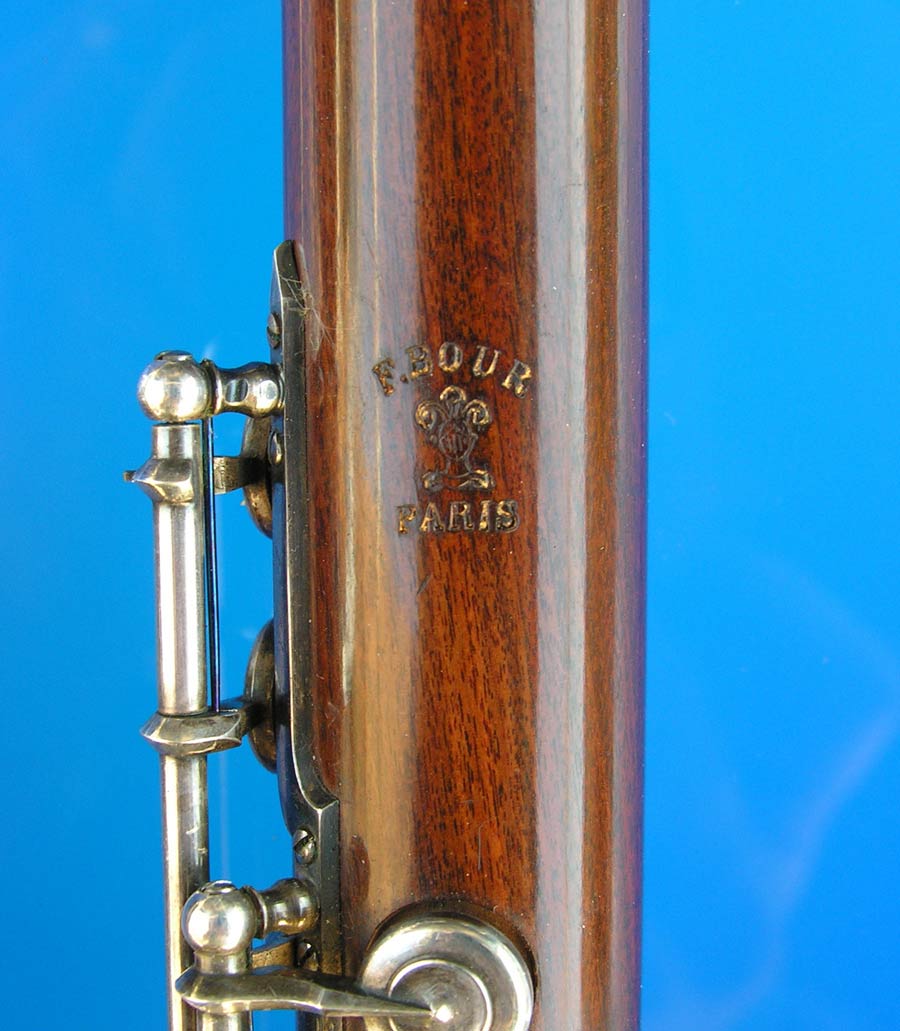 F. Bour's stamp is fresh, with some of the original gold leaf intact. The one-piece strap is visible on the left, whereby the trill keys are mounted on the same strap (or rib) as the main line. This practice had ended at Lot's in 1876, but continued at Godfroy's, Rive's and Bonneville's shops. 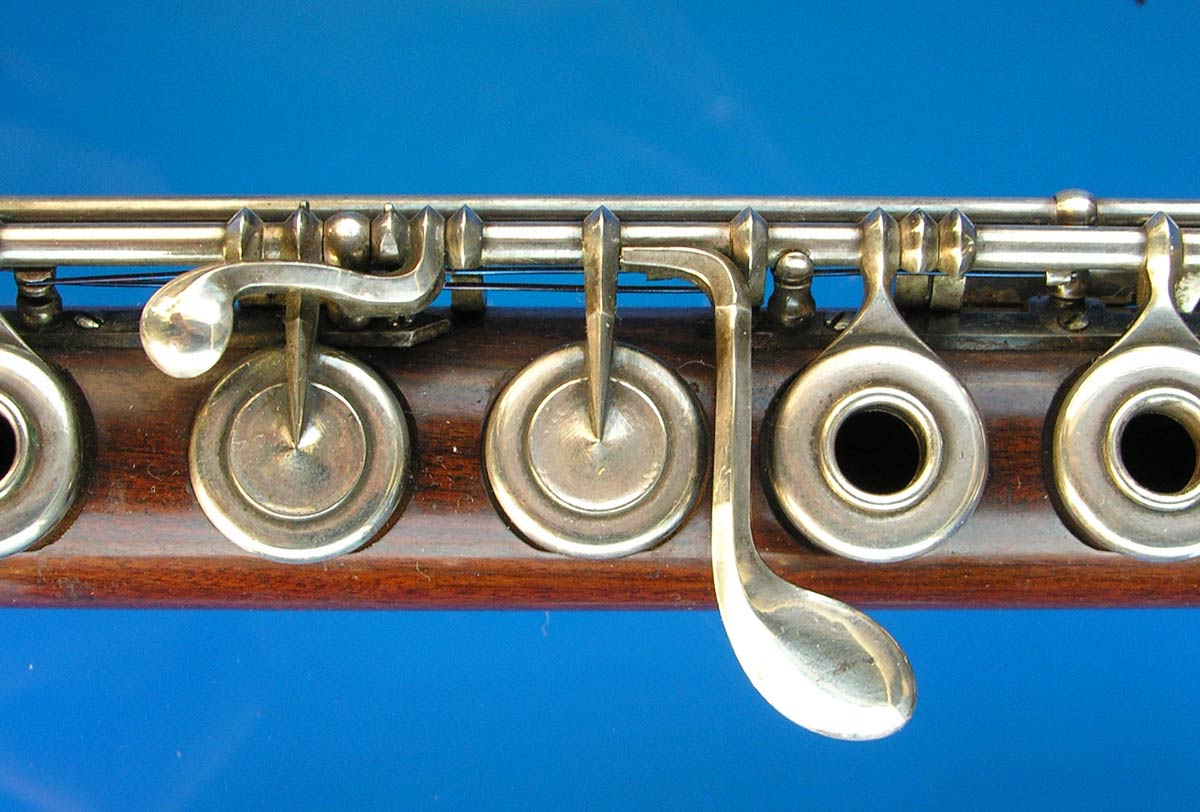 Here we see the sweet open G# in all it's simplicity. The normal connection between the A and G# keys is split, leaving two independently sprung keys. No extra hole is necessary, or any of the other complicated devices used to make a closed G#. 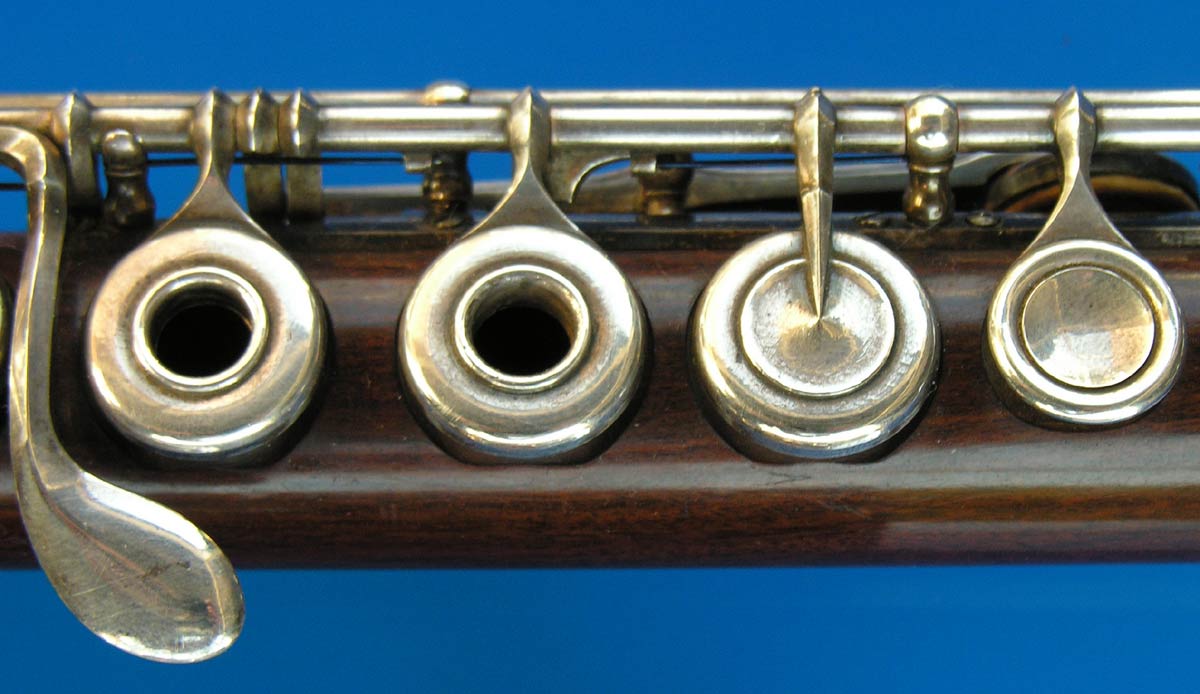 Here on the left-hand mechanism we see the shoulder clutch with a lovely curve, and no screws. 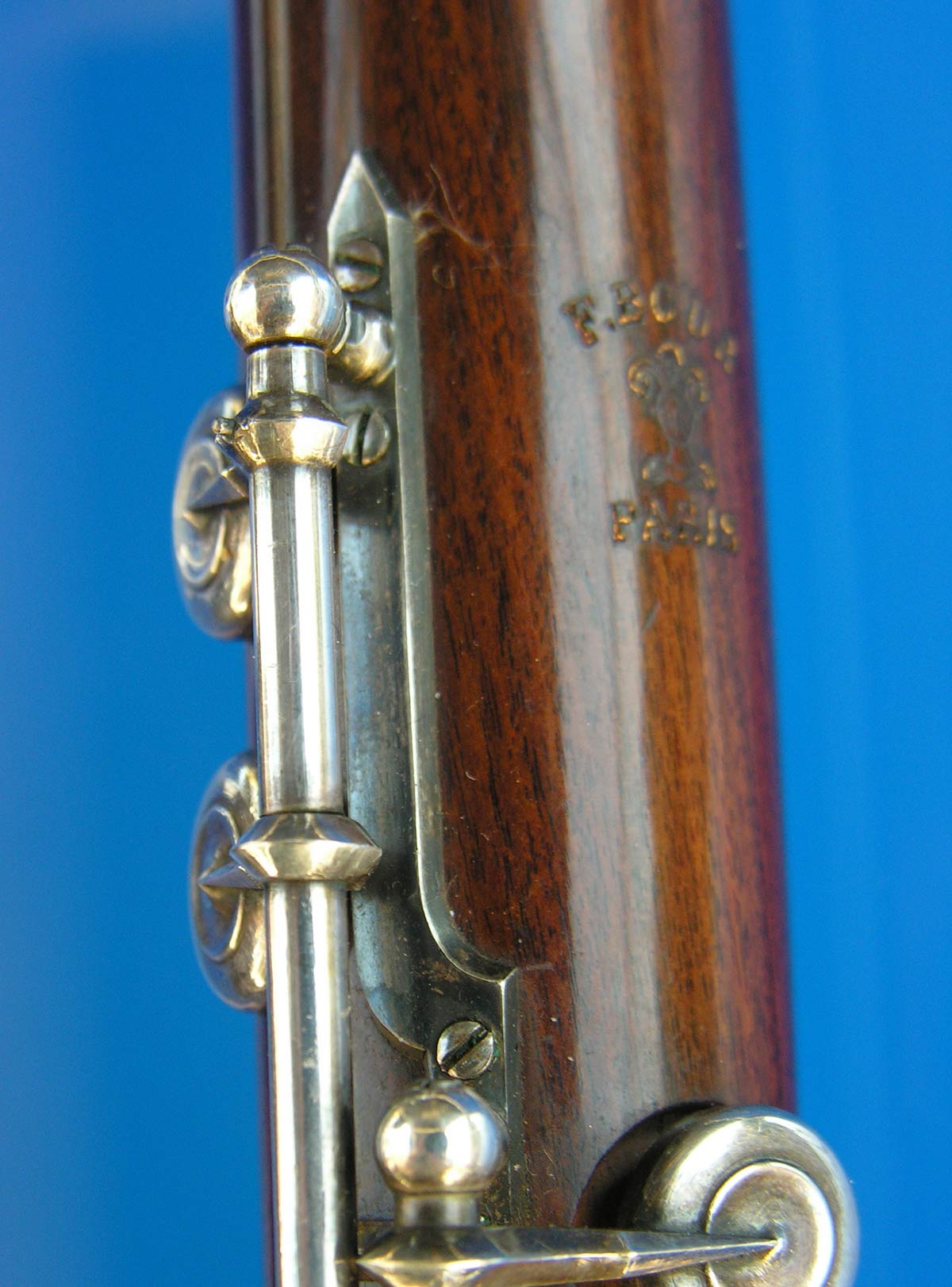 The very finely sculpted one-piece strap, with views of the extraordinary lack of wear, or signs of repairmen! 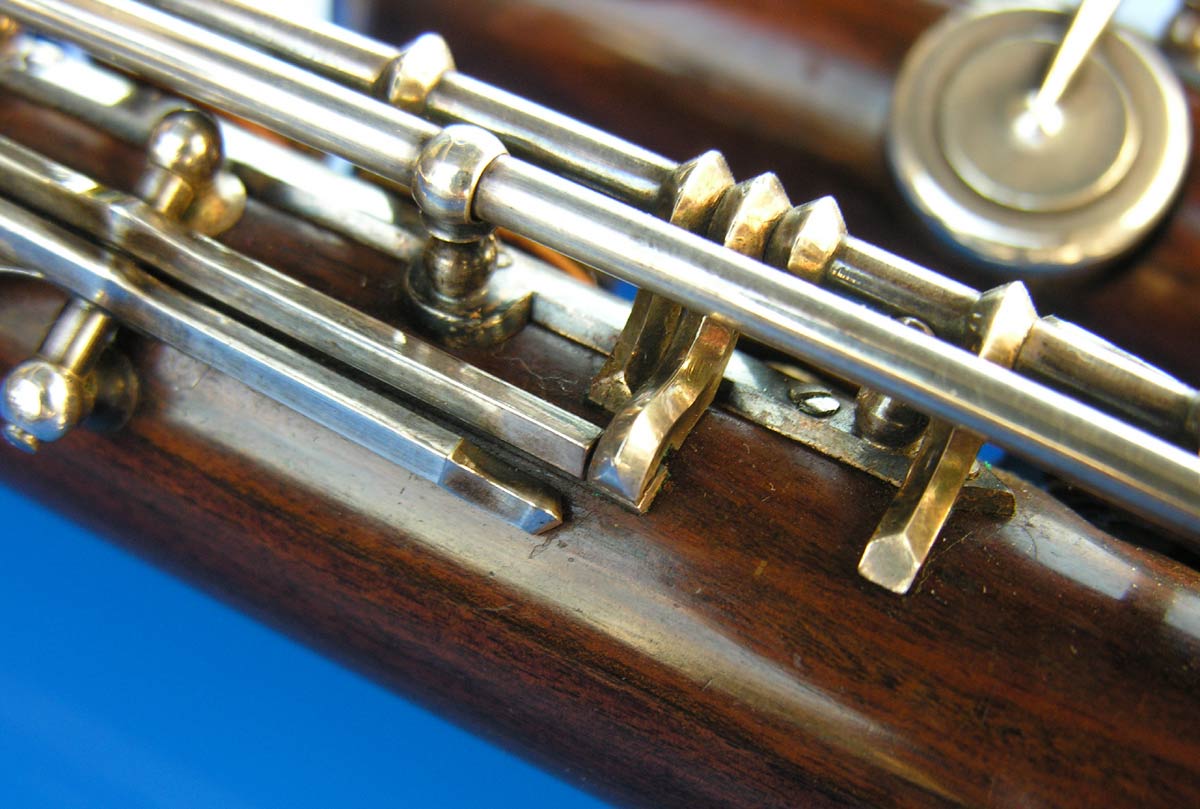 Once again the clean lines of this flute, here at the base of the thumb key. We can see that this flute was built originally with the modern Bb trill, or the bottom thumb tail would extend beyond the upper, connected one, and another tail would come down from the rod to trill the C key. 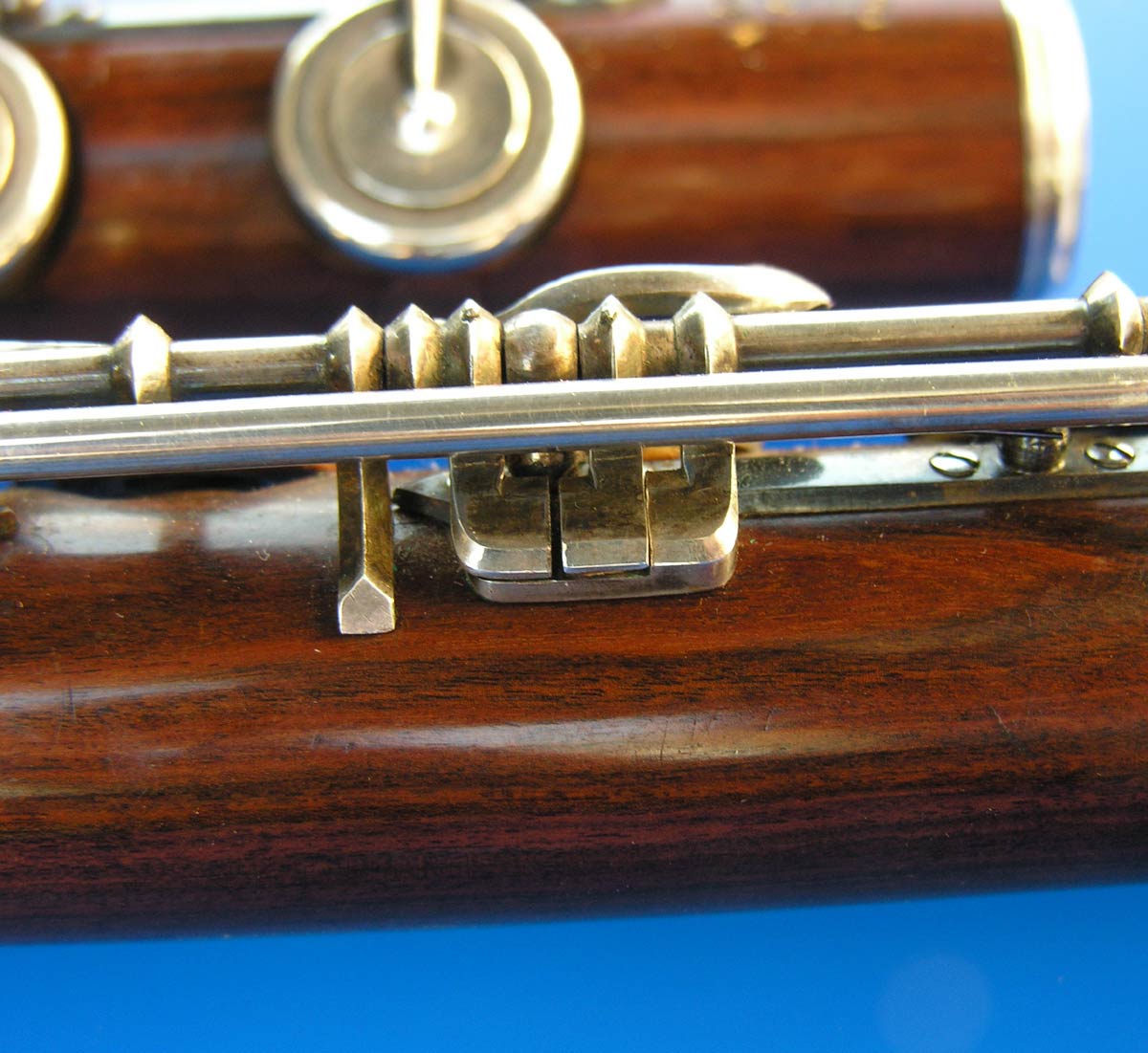 The backclutch of Lotfroy. The precision evident in this flute seems a bit mechanical, not like the lyricism of Godfroy or Rive. Perhaps this is because there is no wear or buffing. 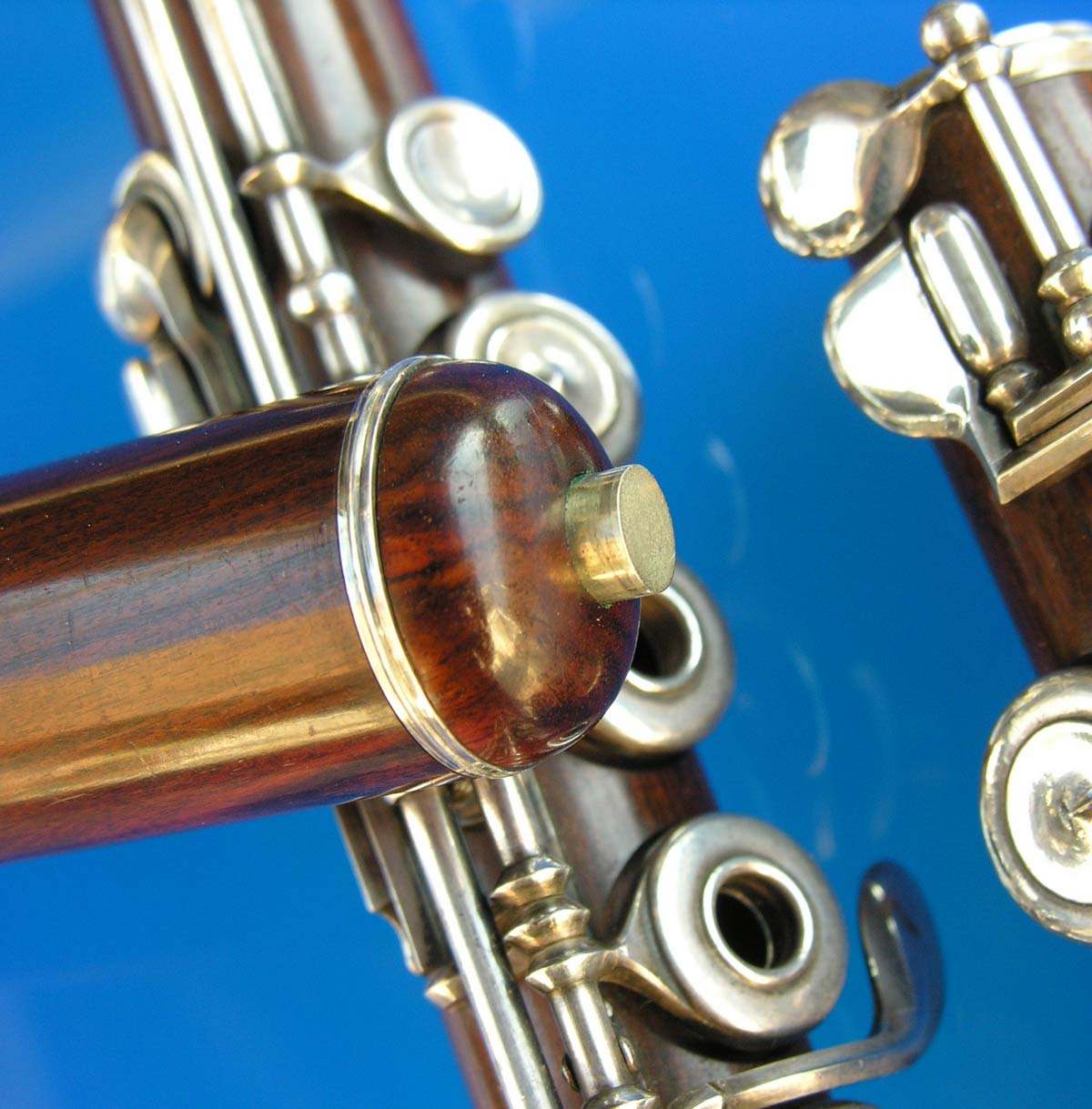 The classic threaded corkscrew protrudes from the cap with a silver tip. One would think this flute were by Godfroy or Lot, were it not for the obvious anachronisms. 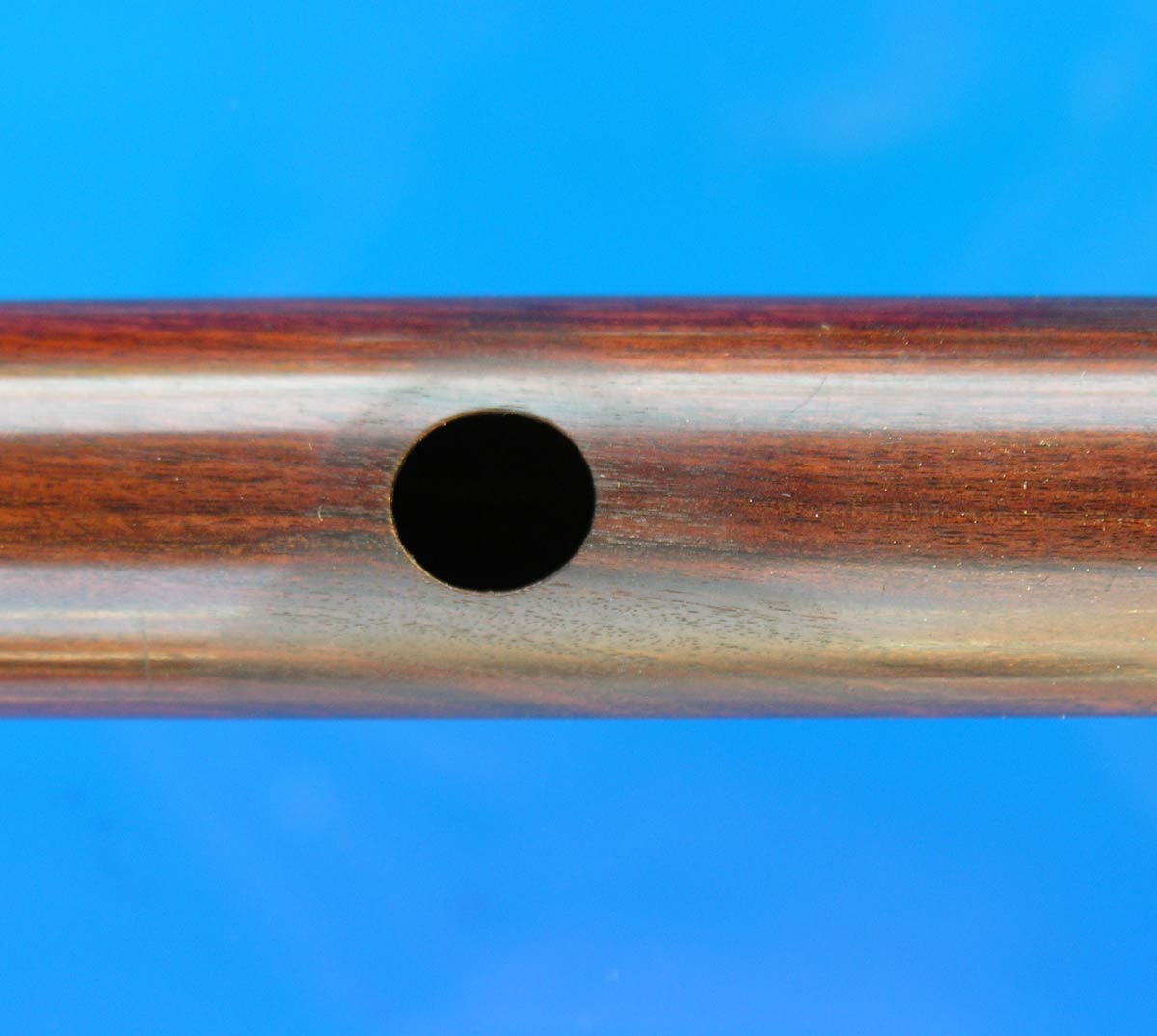 This lovely embouchure is a bit deceiving. Inside, one gains the suspicion that it was originally smaller and more tapered. The sound will have gained in volume and over-and-under tones, and lost in subtlety and purity. Some prefer it this way, obviously. 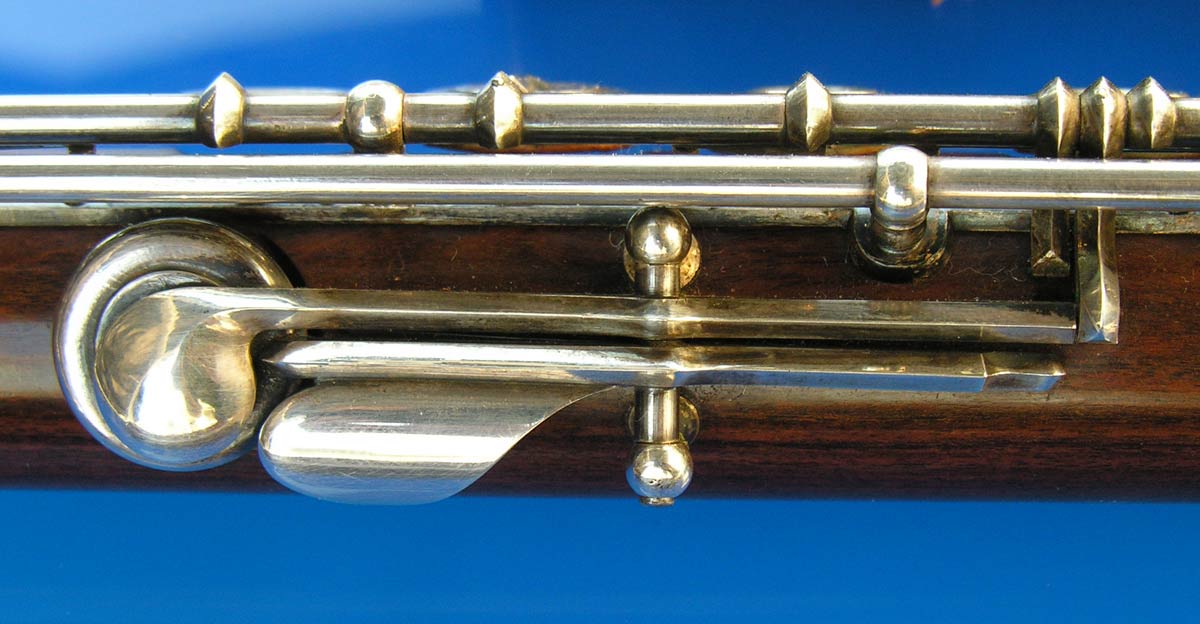 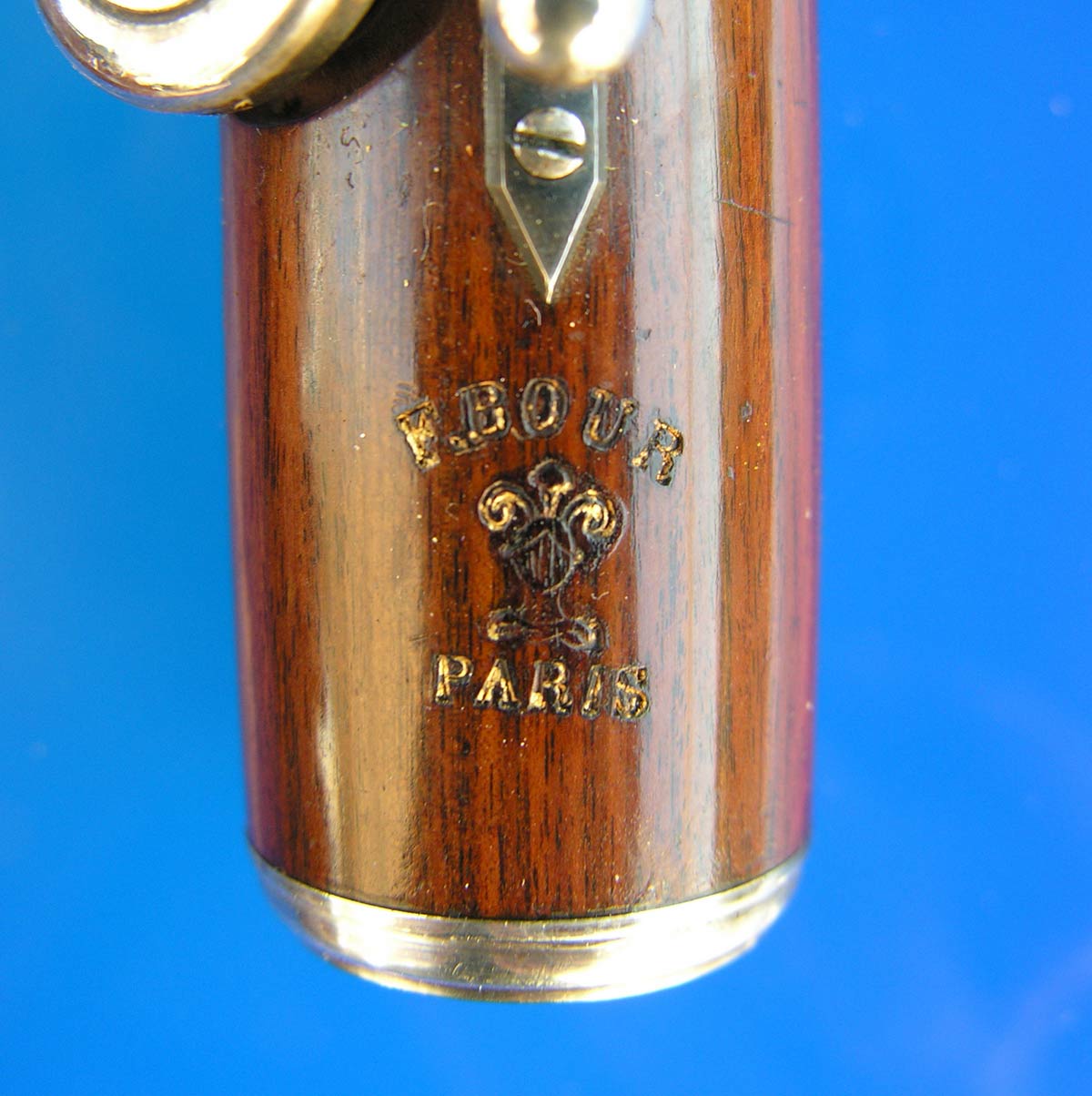