Manufacture Date: The Boehm and Mendler wooden flutes achieved perfection once Carl Mendler moved from foreman to partner, around 1860. This model served as the inspiration for the entire American flute industry until the Louis Lot model took over in the 1920's. By 1860 Boehm had been buying wooden tubes without keys from Louis Lot for several years. Interestingly, Lot never mentions Mendler in his record books.

Comments: The Boehm and Mendler mechanism is fascinating. It changed very little after they developed their successful model, in the late 1850's. The Boehm and Mendler flute is based on the work of Godfroy and Lot, yet with distinctive and elegant Germanic traits. Of course, the acoustical ideas of Boehm are also included, which required a lovely new clutch at the Bb thumb key, and the beautifully simple offset, open G#. Mendler and Boehm designed their elegant covered-key cups, and the little balls to hold adjusting screws. They basically used Lotfroy's pinned footjoint, but with rollers. Mendler's mechanism differs from Lot's also in the backclutch. B & M were able to eliminate one of the three spades Lot used, for the F# key. The back clutch is here used only to get around the kingpost for the Bb connection. The F# clutches are the little balls, which push on knuckles pinned to the F# rod. Boehm and Mendler used another ball on the F key, instead of Lot's middle spade on the back clutch. This flute has an interesting pedigree. It was brought to us by the son of the former owner of the famous Baxter Northrop music store in Los Angeles, around which so much of the history of flute playing in Los Angeles revolved. This is the last instrument in the family's collection. It was probably brought in on trade many years ago, and clearly has not been used much since. The owners before Baxter Northrop are unknown.

Material: The wood is a deeply grained blackwood with reddish streaks; probably grenadilla. The keys and trim are silver. The springs are gold (except two steel replacements), and most look originalish. The crutch and holder are missing.

Condition: This flute appears to have been very well used, with only minor signs of advancing age. Alas, the embouchure appears to have been opened on the edges; a sort of primitive Cooperization. There is a small barrel crack on the headjoint, and the footjoint sockets. The head crack is short, and the foot crack of course goes into the D# hole. Both have old glue. There was some action around the Bb key, whose tube looks a bit different, the soldering is not Mendler's, and the Bb adjustment screw was overused. Overall, this instrument radiates the pure craftsmanship of Carl Mendler, one of the great flutemakers of all time. 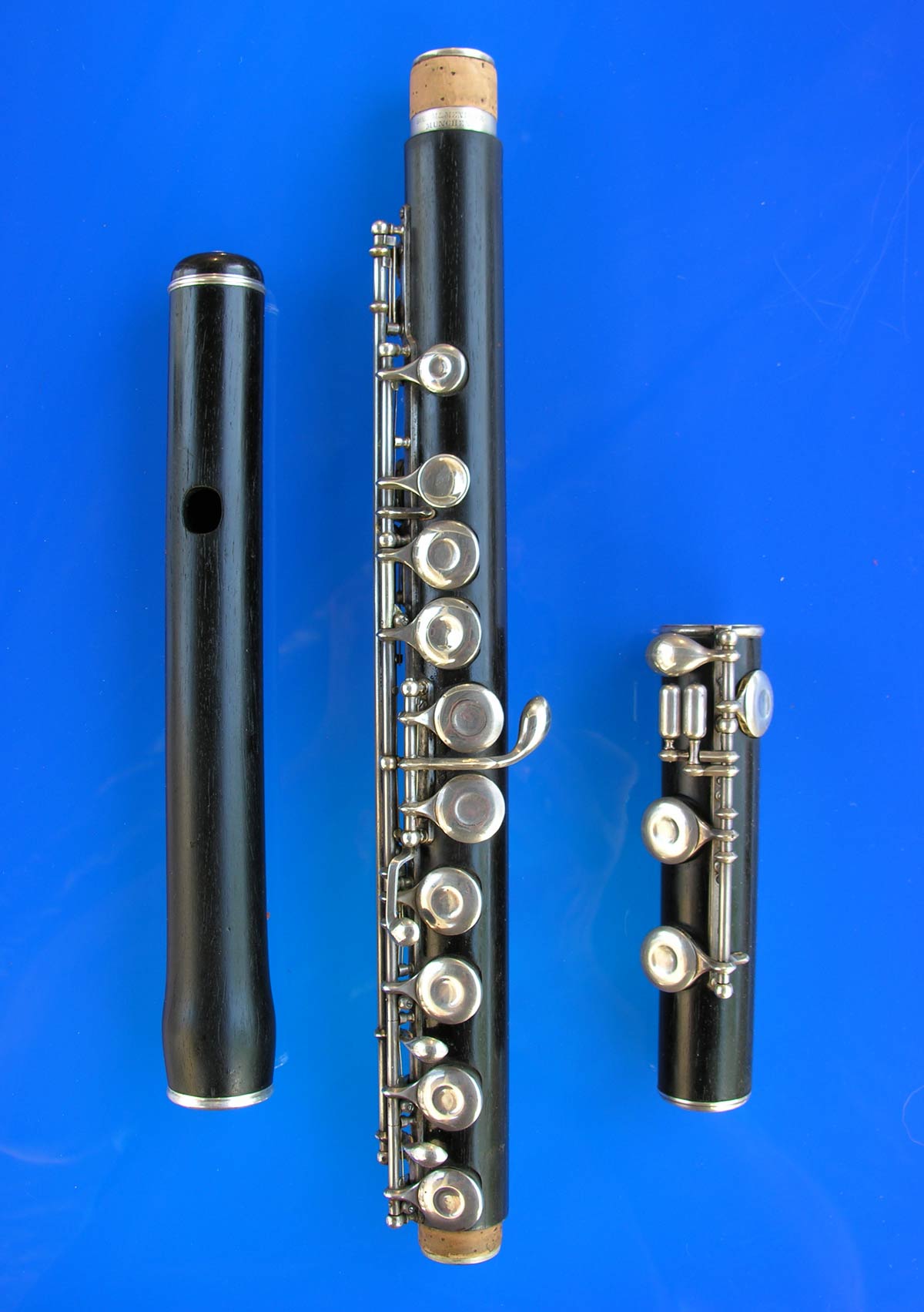 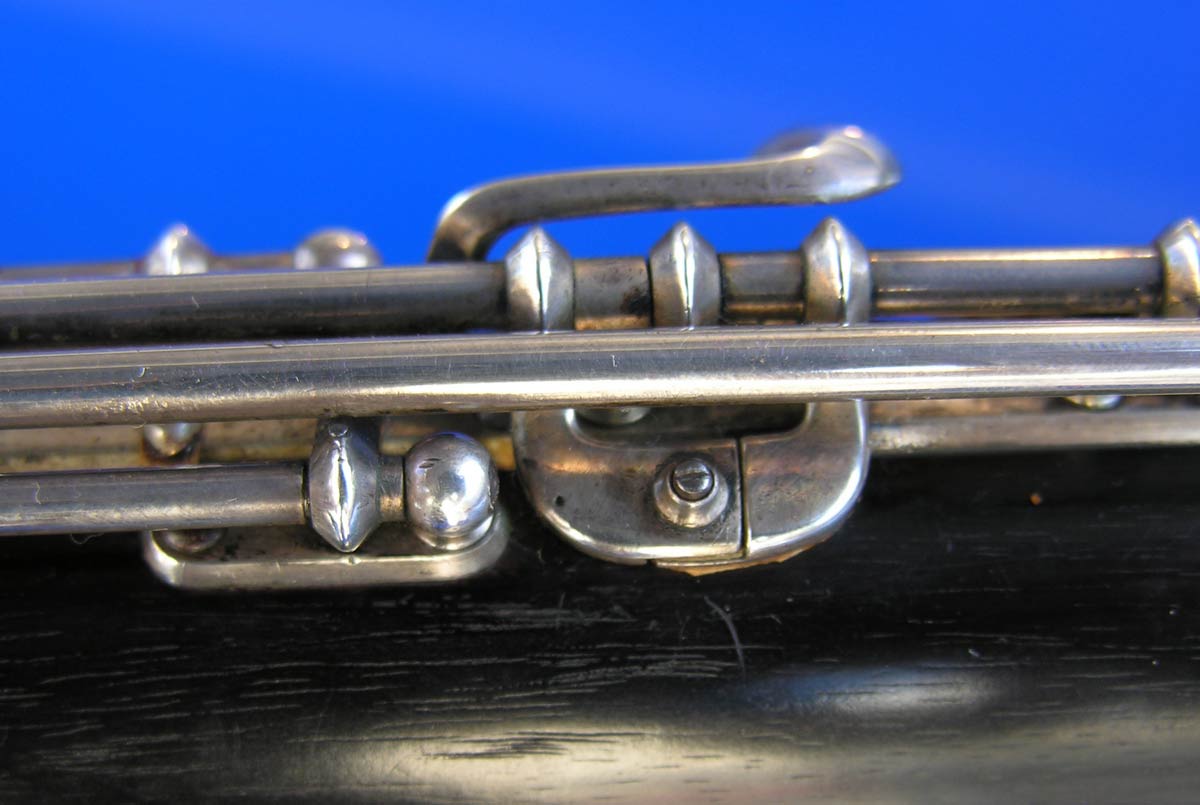 Here at the thumb key are Mendler's most sophisticated additions to the system. The round thumb key hangs down from the main rod, and is independent of everything except a hidden little protruding steel pin, which is depressed by a flat spade coming up from the middle of the three silver pieces to the right of the thumb. These three pieces are: the rounded top of the stationary pillar, the knuckle of the B trill key, and the touch for the Bb. The Bb works via an "opposing arch" clutch; the worst kind of clutch, with the least amount of leverage. A spade above the touch slips under the butt end of the Bb, and manages to lift it easily, closing the Bb key on top of the flute. Awkward, yet here it works very nicely, certainly due to the skill of this partnership. 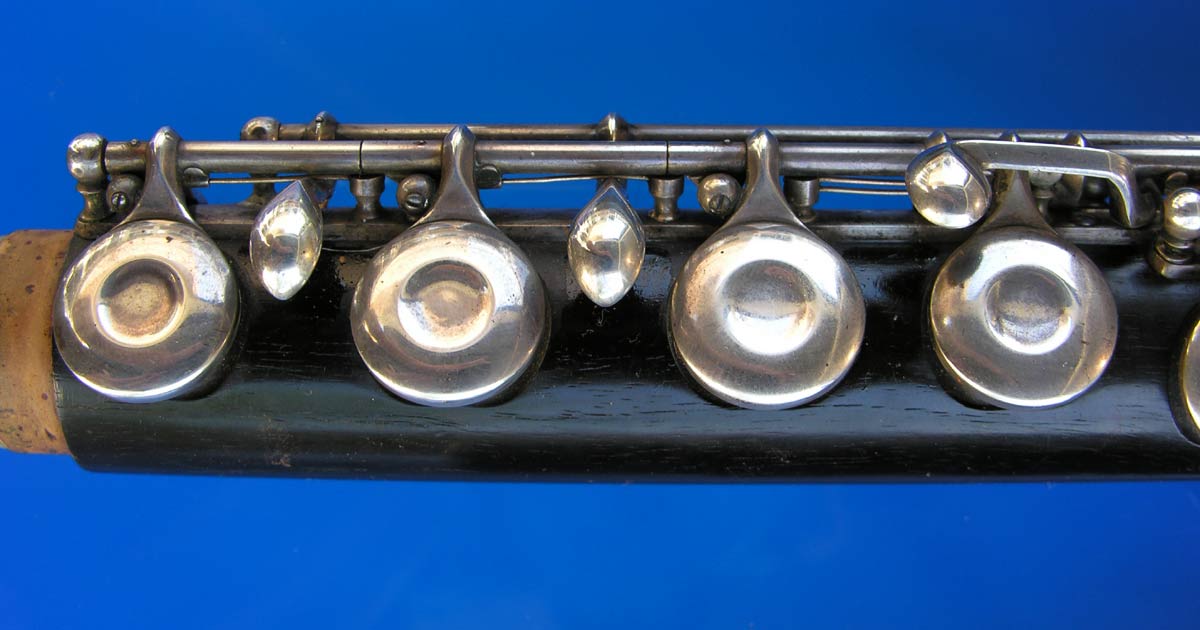 This is the other end of the thumb-key rod, with the B trill touch pinned to the steel inside, and arching up, under and around to emerge in all it's glory above the flute. Here also is the backclutch, fitted with an adjustment screw. Boehm and Mendler's backclutch used only two parts, leaving out the hanging tail of the F# key as seen on Lotfroy's mechanism. 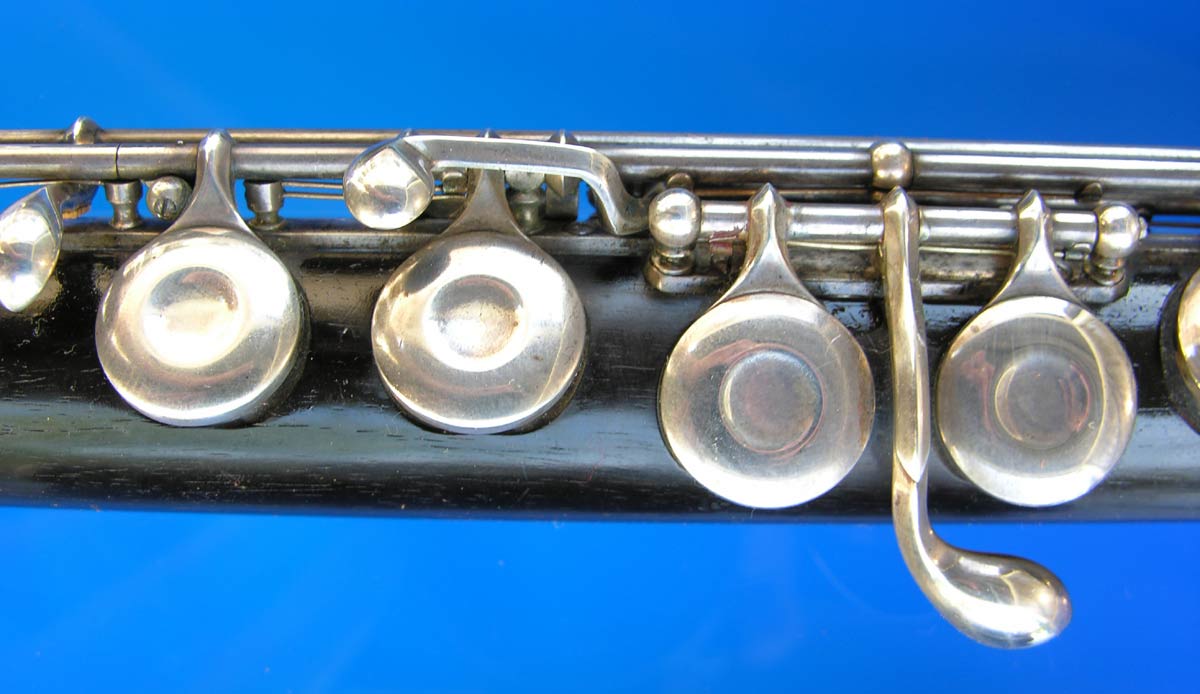 Starting from the left side of this remarkable flute, we see the ornately turned little post, then the section with the ball and screw, after this the key, which is connected to the silver tube running over the trill key and ending just above the spring holder (which doubles as an emergency support for the whole rod). The gold spring runs back, also over the trill key, and holds open the key via the cute little spring attachment nestled in the armpit of the key. The other armpit holds the little ball-and-screw, which is soldered to the key. Behind this ball hangs a flat spade which is pinned to a steel rod running inside this whole tube up to the F# key. All three little balls push on similar spades when their key is depressed, shutting the F# but none of the other keys in the series. This brilliant arrangement is the work of Godfroy and Lot during the few years after the 1847 patent. Boehm and Mendler have added the ball with adjusting screw as their own advancement, and included this "armpit clutch" on the F, reducing the back-clutch to two pieces! 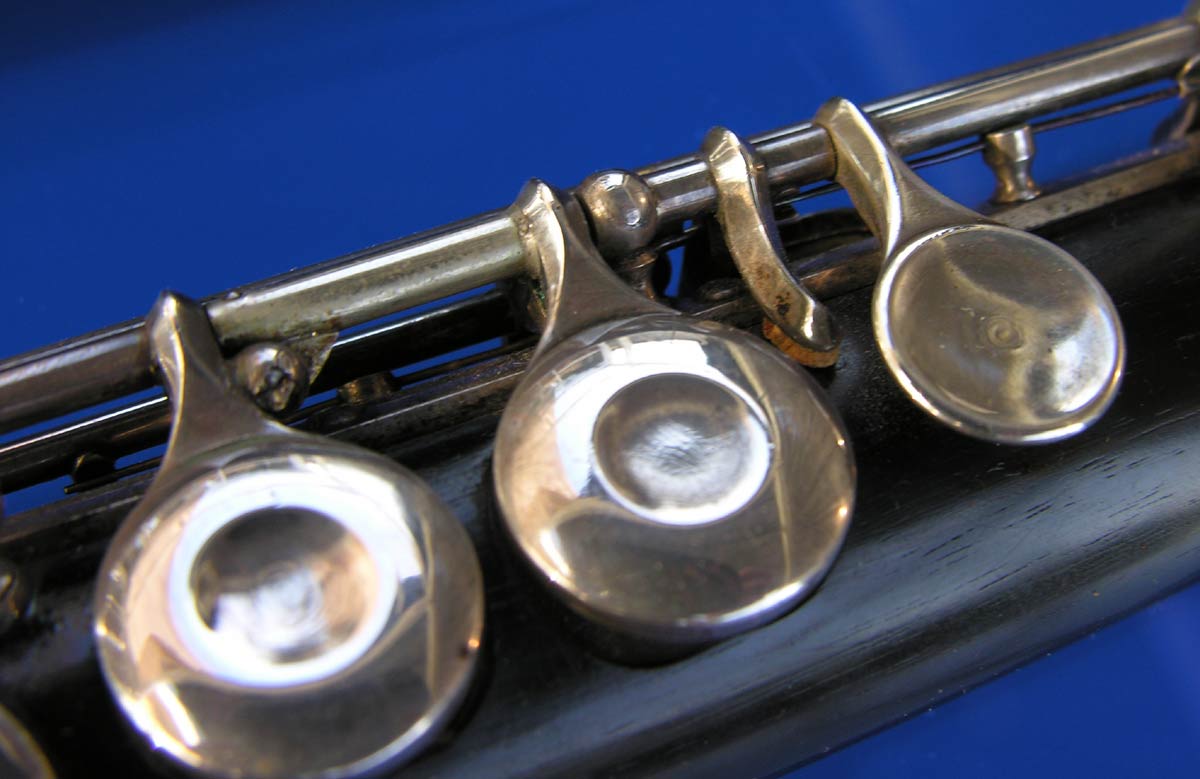 When Boehm and Mendler first designed this offset open G#, Lot was still making the Dorus G#; thus the idea of putting the G and G# keys on their own rod was not radical, but placing them inside the main rod and offset from the other keys was. Here is the birth of the "offset G" key. 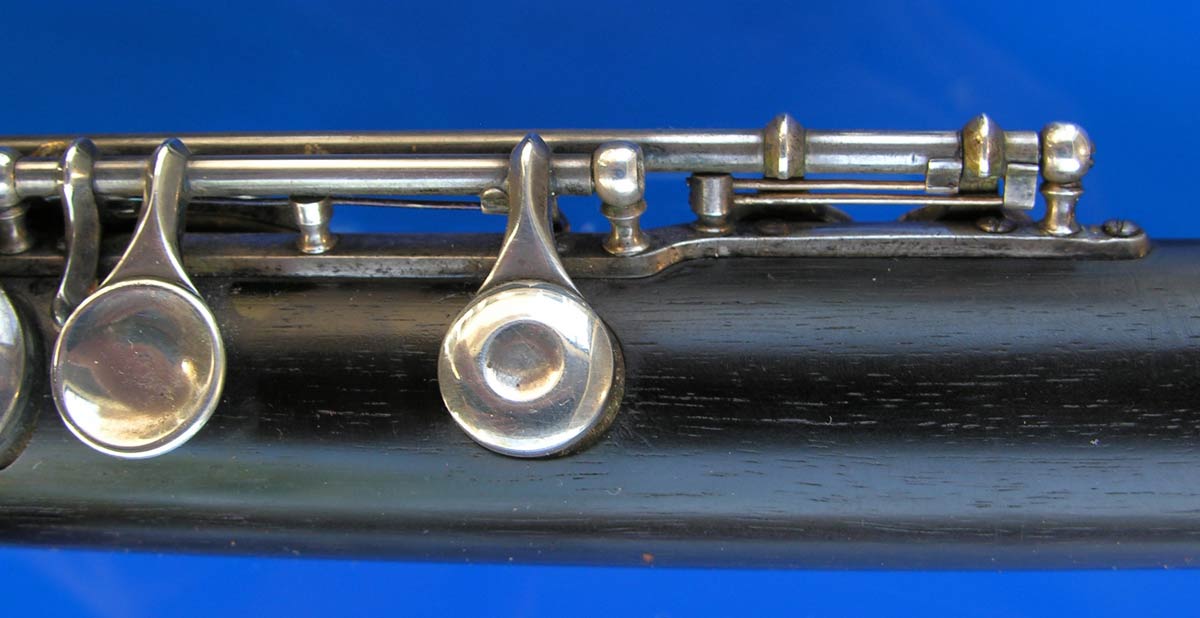 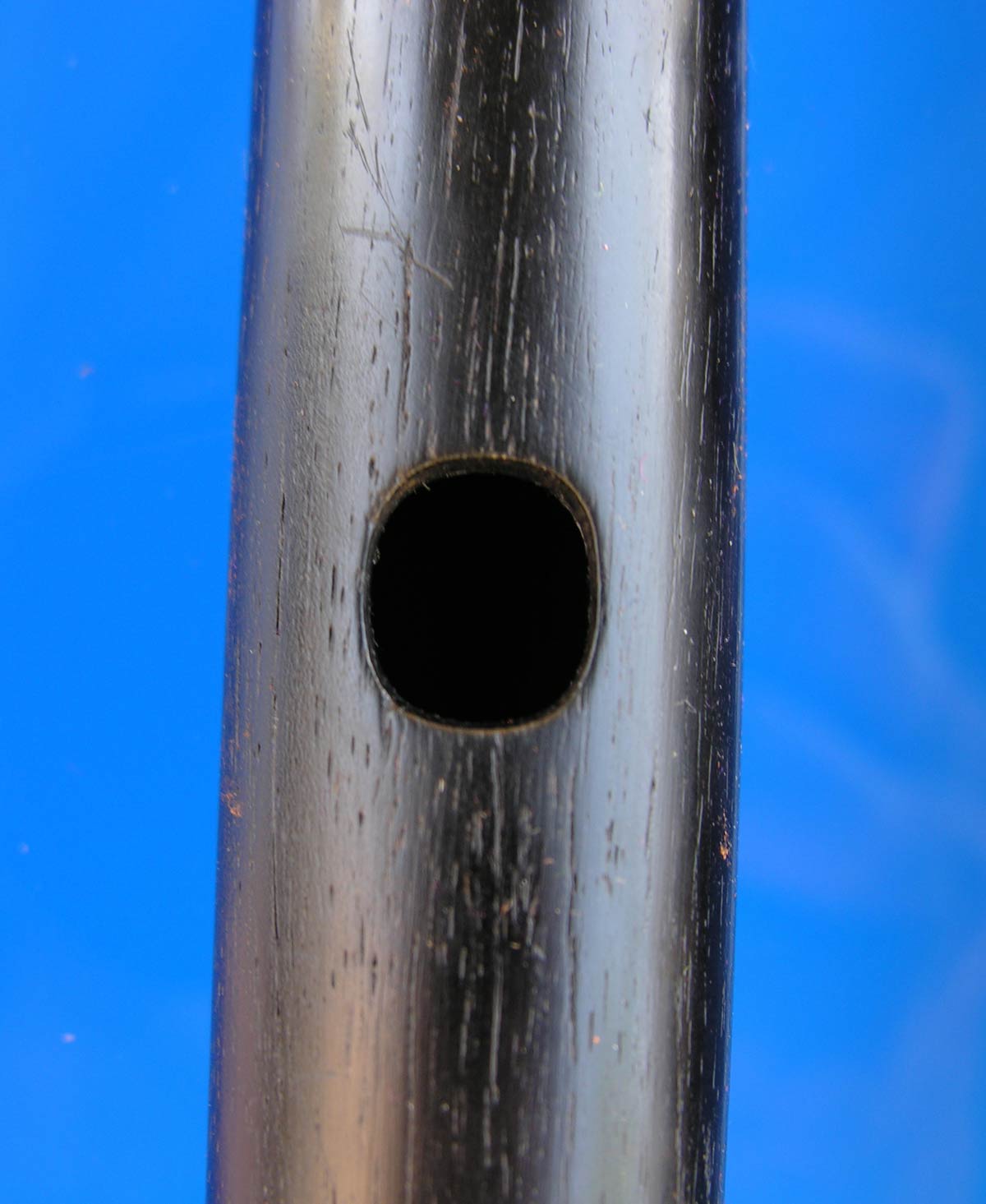 Like Lotfroy, Boehm and Mendler used one strap for the main and trill keys. Here we also see their lovely pillars and handsome mounts. The flat-topped spring mounts and thick gold springs are classic Boehm and Mendler.

The only drawback to this flute is the slight widening of the embouchure edges, sort of anticipating Albert Cooper's ideas. Nonetheless the flute plays with a superb and compelling tone and feel; even with old, leaky pads.