Manufacture Date: Made for Lauret of Marseille May 1, 1863.

Comments: This is one of the nicest of the surviving original Lots. This instrument marries the delicacy of the early Lots with the power of the new model. Previous use includes no abuse at all. The parts are perfect; the backclutch, where bad repair work is often first seen, is perfect. She plays very easily and with all of the richness and wonderment one seeks with these flutes. Although the head has been cut a tad to raise the possible pitch, it seems the flute does prefer to stay a bit low.

Material: Made of silver, currently with steel springs. Cork screw of wood.

System: The original order reads: "Une flute Cyl. Corps & cl�s en argt. nouv. Diap. Cl� de Sol# ancienne, Embouchure guilloch�. No. 742. F400-" Thus this is a silver flute to C, pitched at A=435, with a now old-fashioned Dorus G#, and a beautifully engraved lipplate. No mention of the embouchure unie, which first shows up the next month on Brossa's flute #740. This embouchure is the simple style, with a thick plate. On this flute, the original B trill has been converted to the more modern Bb trill, and a very nice job it was, too. The pad washers have also been converted to the modern screw-and-washer type. The tone holes all appear to be of equal size.

Condition: In spite of it's extraordinarily good condition, this flute appears to have been well played. The guilloch�, or engraving, on the lipplate has been worn through from lip pressure, but strangely this wear is off center, definitely favoring the far right side of the lipplate. This suggests that one flute player used this instrument extensively, who had a tendency to hold the flute closer to their right shoulder than usual. Any other regular player would have been unlikely to hold the flute in the same way, and wear more in the middle of the plate would be evident. Other than the slight wear the lipplate assembly looks completely original and perfect. The crown is worn from wiping (or rolling in the case?), but is otherwise perfect as well, including the wooden screw. It looks like about 3mm of the tenon has been cut off, and the ring has been discarded. Some hatch marks remain where the ring had been. The body is in excellent condition. It looks like the toneholes were resoldered, possibly at the same time the pad washers were converted. The washer job looks good, but the soldering is a tad sloppier than Lot would likely have done. Everything on the body looks original, except for a few oversized pins, and the very nice conversion to a Bb trill, which included cutting off a bit of the tail that would have slid under the thumb key ball. The footjoint is also in excellent condition, although it looks as though the bottom tone hole is a replacement, and is just a tad too small. In short, with a few very minor marks of age, this flute is perfect. 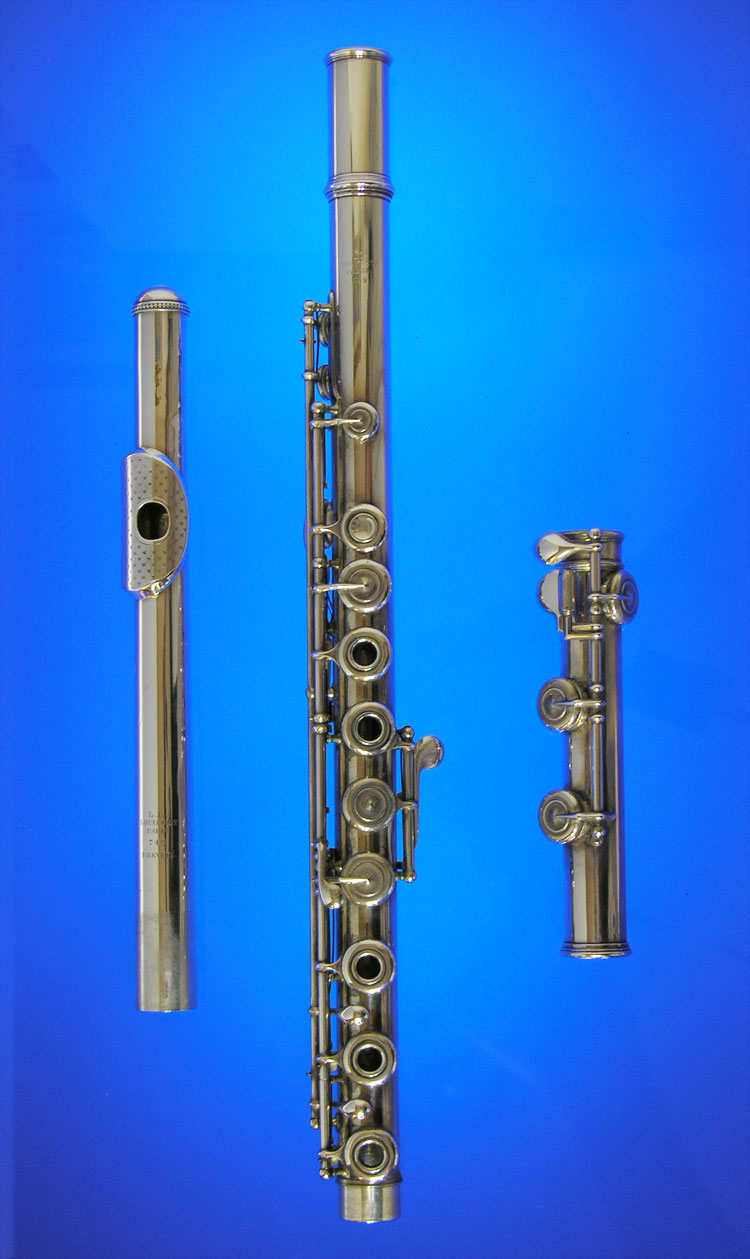 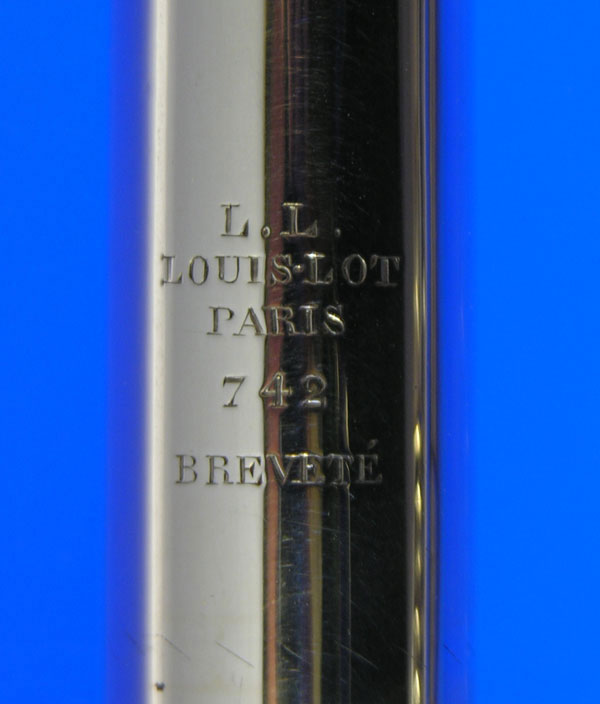 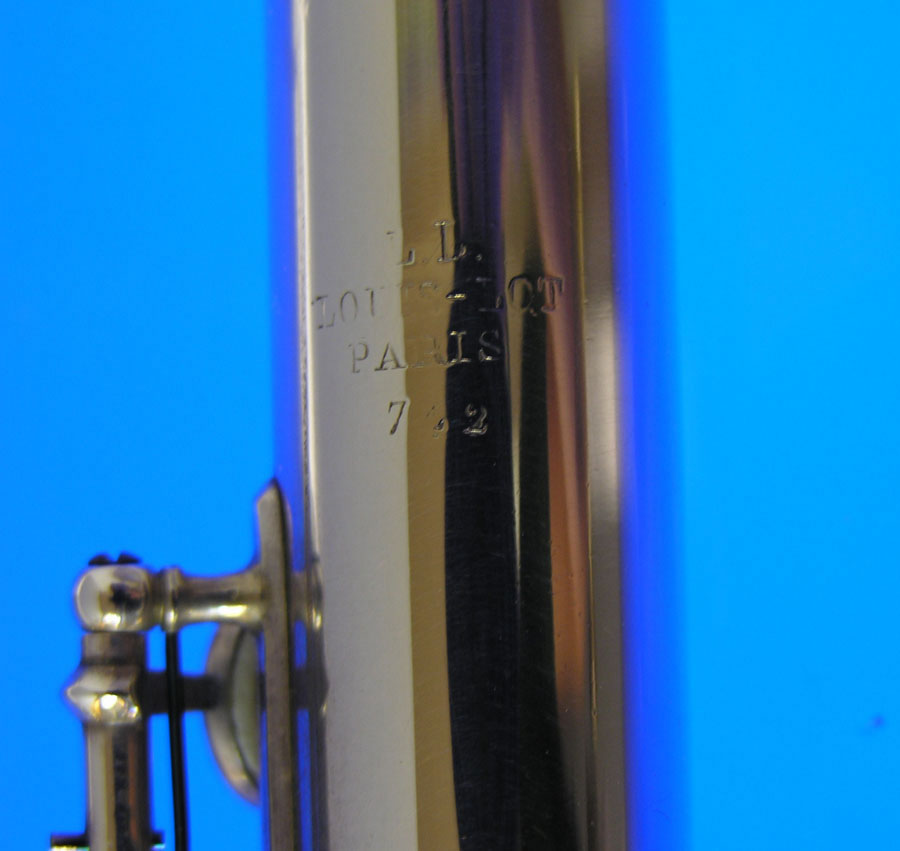 This beautiful flute is also numbered on the body. The body stamp, not uncommonly, almost appears to have been "stamped". rather than engraved as is the headjoint. 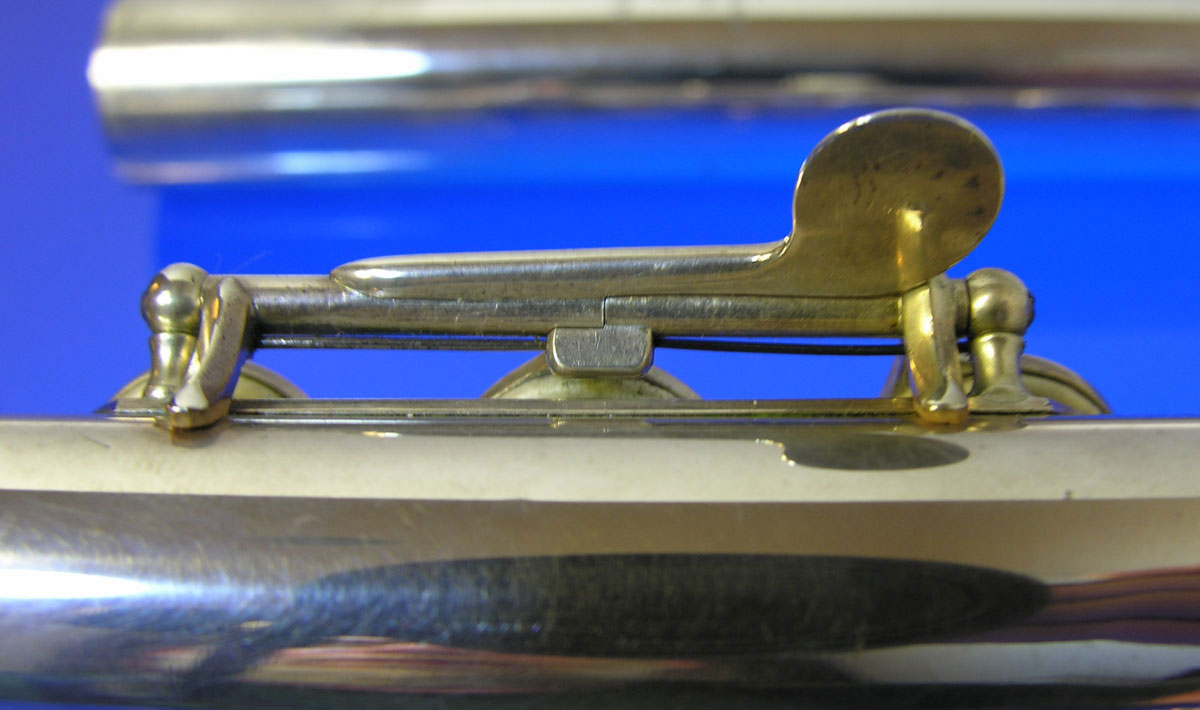 Like the rest of Lot's early flutes, this footjoint is perfect in it's simplicity.

This lipplate is engraved in the style Lot calls "gilloch�e", with typical wavy lines, and a fleur-de-lis stamped on top. Here we can also see the flange of the chimney. 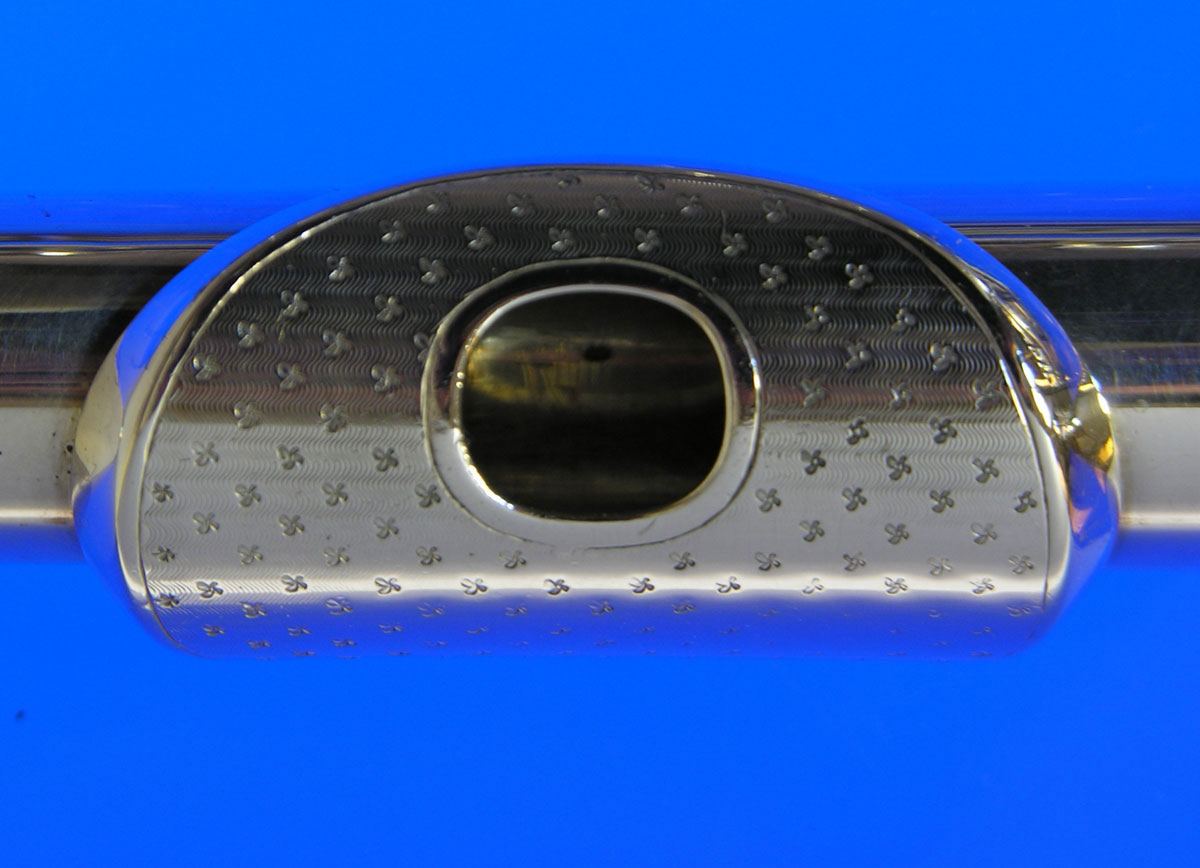 Here is a full on view of the lipplate and original embouchure hole. 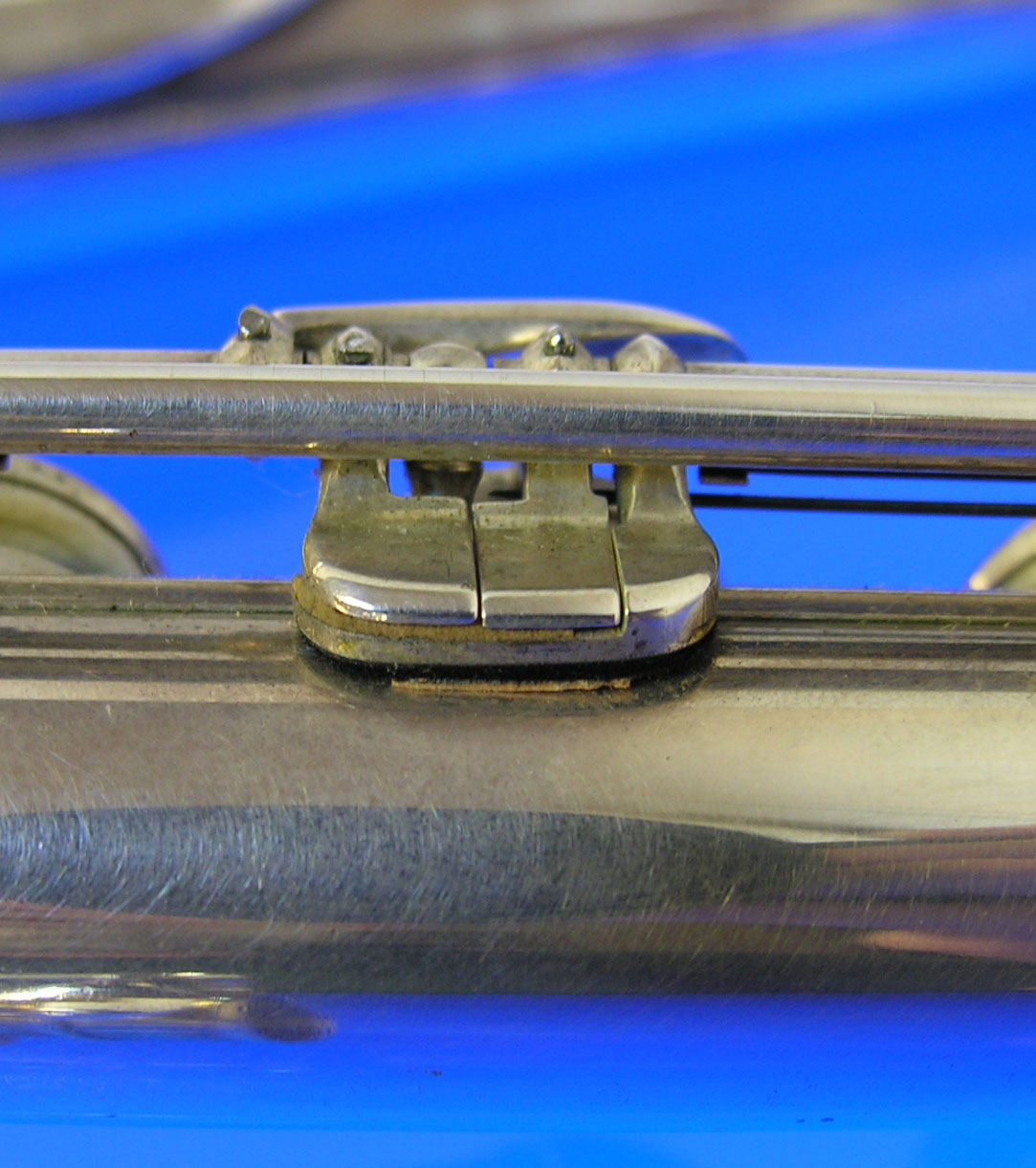 This simple and elegant backclutch is part of the genius of the "Lotfroy" years. On this flute it remains in excellent, unharmed condition. 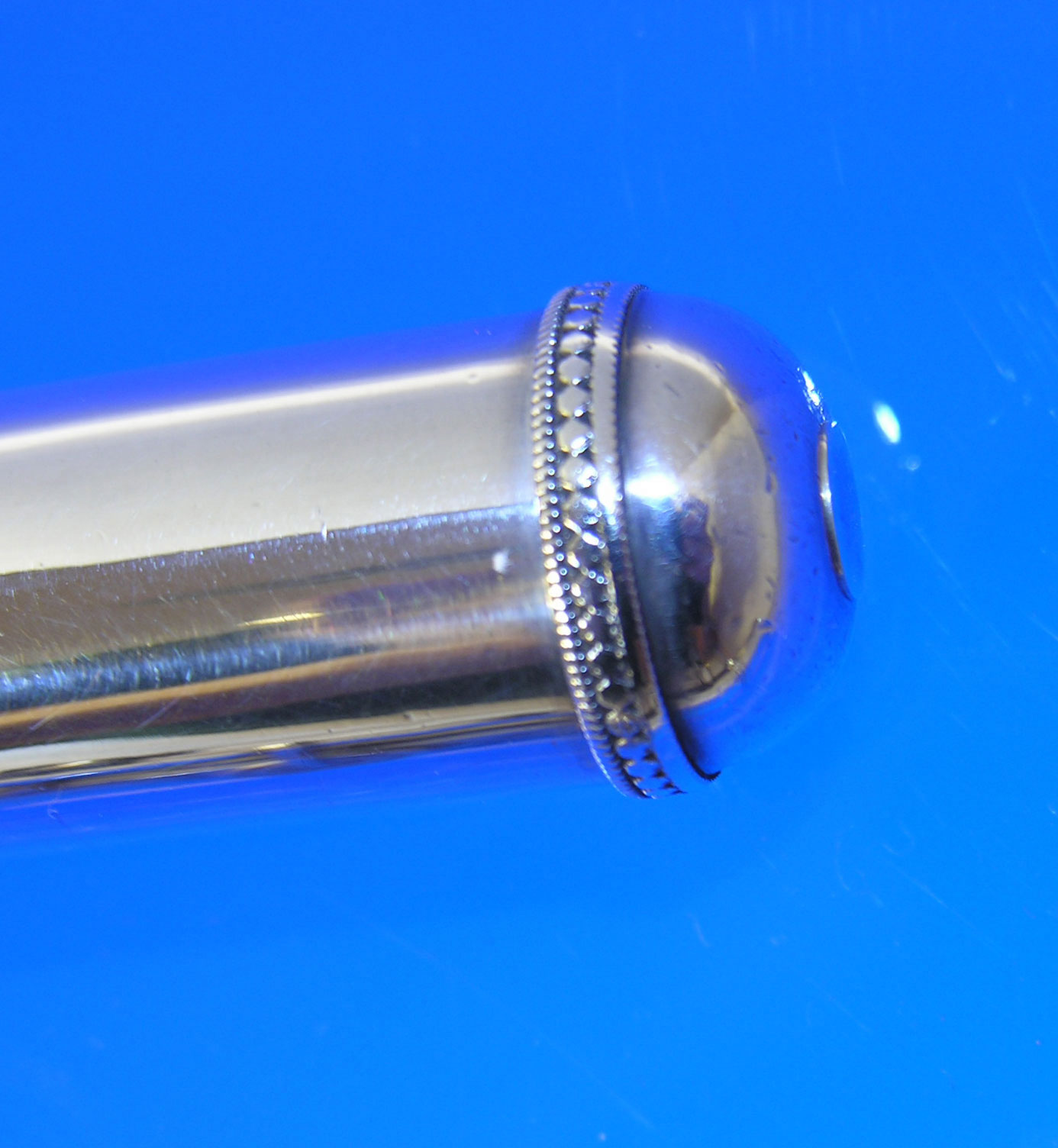 The crown is worm more than the rest of the flute. The silver-covered head of the wooden corkscrew mechanism can just be seen peeking out of the head. 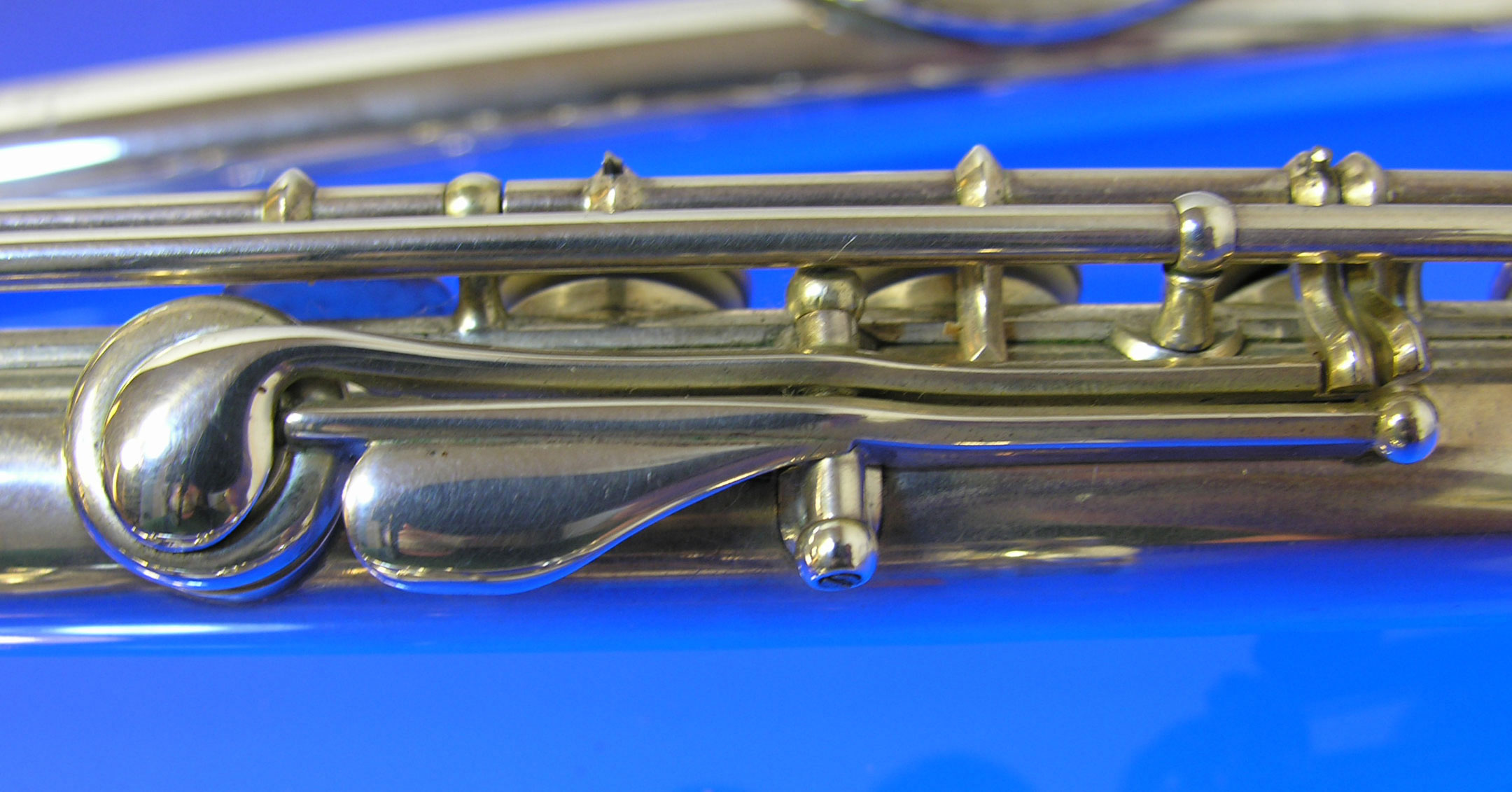 The lovely ball-ended B thumb key was first designed for the 1832 system back in the 1840's, with Briccialdi's Bb (altogether another Lotfroy work of art). Here the old B trill connection has been cut off; it would have rested under the ball.