Hallmarks: Hallmarks abound. Oddly, the crab mark of silver purity for articles made outside of Paris is stamped everywhere, including places no sane person would stamp a flute, like the rod for C on the footjoint. Only the B thumb key has the silver mark for Paris, without any maker's diamond. These marks imply that the flute was forcibly hallmarked while in a shop for repairs outside of Paris, or possibly when passing through customs.

Comments: The 18 K gold lipplate is said to be a Lot lipplate from a much earlier period, c. 1858. This flute first surfaced with a silver plate, which had been enlarged, and which is included here. The gold plate has a smaller hole, which one would expect from an earlier flute. This lipplate works beautifully. Although the "sweet spot" is typically small, once you find it the flute opens up with the power, richness, flexibility, and perfect tone that Louis Lot, the Master, invented and perfected. There is one curious aspect about this very handsome flute, namely the profusion of crab hallmarks. From time to time in France there seems to have been vastly increased surveillance of silver marks. Since Louis Lot did not hallmark his flutes, this instrument could have been in danger of destruction by the silver police. The crabs may have been given to this flute in a shop north of Paris, to comply with the tax laws. It is also possible that the crab hallmarks on this instrument were added as late as 1962, when the venerable Boar's head for Paris was terminated in favor of the more attractive crab stamp, formerly of the Northern suburbs. The singularity of the Boar's head on the thumb key is a curious one. Perhaps a major overhaul occurred at Lot's shop in later years, at which time the thumb key was replaced, and new pad washers applied (the washers look like Lot's, but possibly later). Apart from the unusual hallmarks and the small signs of previous use and repairs, the body and mechanism of this flute are perfect and completely original. The embouchure may be a bit smaller than the original one, but it is a magnificent lipplate; quintessential Lot. As a player, this flute is definitely pitched below A=440, probably at N.D. A=435, yet her tone, brightness, richness, dexterity, and cool feel beneath the fingers are all the very best of Lot. This is a flute of the very highest quality, in superb playing condition, and filled with the original workmanship of the master.

System: This is a model 5, silver flute with C foot and independent G#. There is also a gold embouchure (said to be from a Lot 300 series), which was added later. The trill is to B. The strap is of one piece, and the right hand clutches are shoulder-stopped. The footjoint is the lovely original Lotfroy design, with the little hanging finger for C#. The original silver embouchure assembly is included, which is an "over and under", double flanged chimney. This embouchure has been opened on the sides, which is why the unaltered gold plate was put on.

Condition: The condition of this flute is currently excellent, having recently been completely overhauled, including a full resoldering of the tone holes. Previous to this work, it seems apparent that this flute has been used by a serious flute player. The rods have been swedged, yet the keys show little signs of wear. The player clearly had a very light touch, and did not massage the flute while he or she played. The mechanism appears in perfect condition, other than this slight mechanical wear from use. I can see no signs of serious repairs.

Pitch: This flute was made to play at A=435, in our opinion. 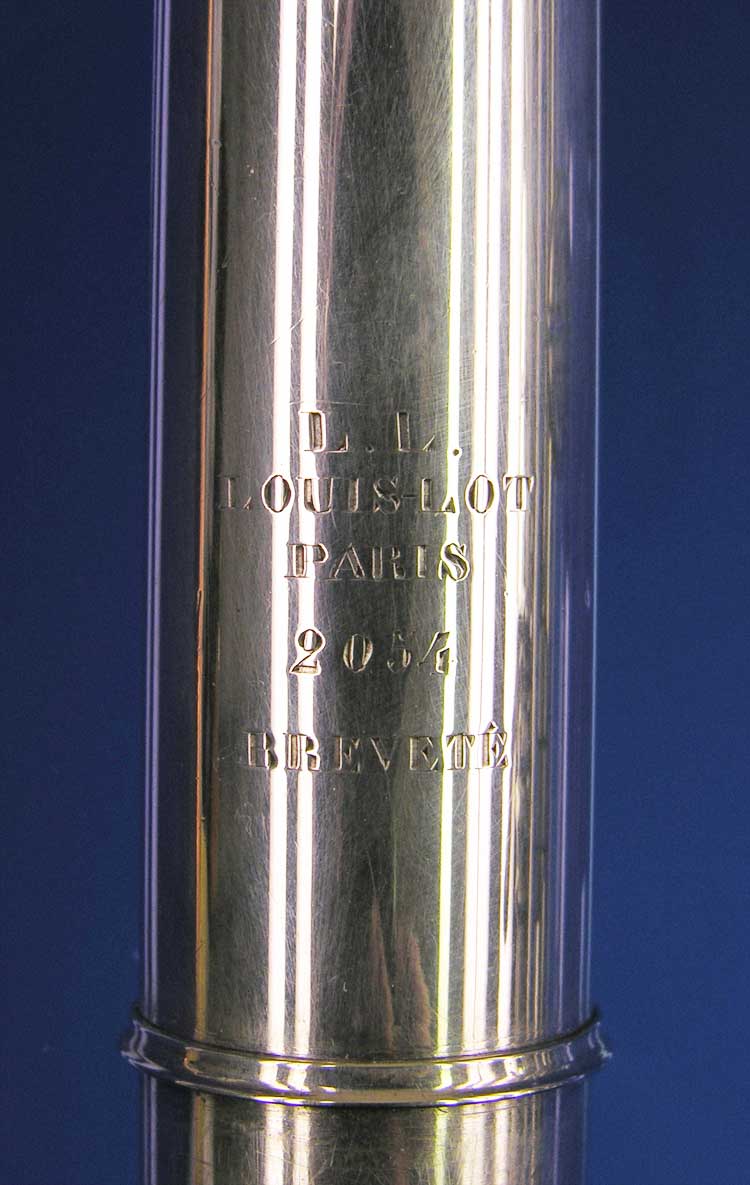 Louis Lot's headjoints all seem to be engraved, while the bodies are often stamped. Note the small hyphen in "Louis-Lot", which was dropped after Lot retired. Is this Lot's realization that he was an "event", not just a name? 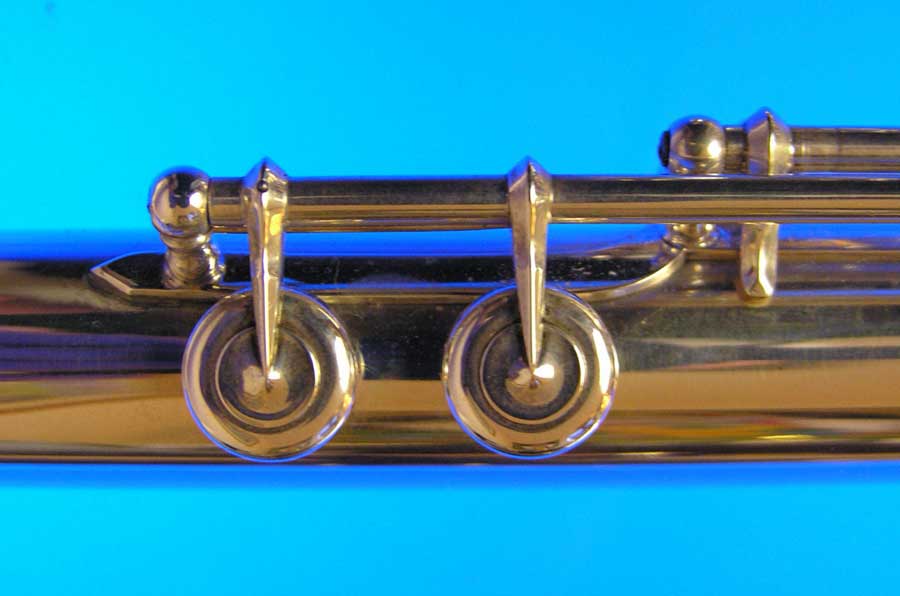 The trills and upper strap, including the graceful curve as the main strap, or rib, extends over to hold the trill key post. After Lot retired, this was changed to an extra little rib for the trill keys, which is how it is still made today. 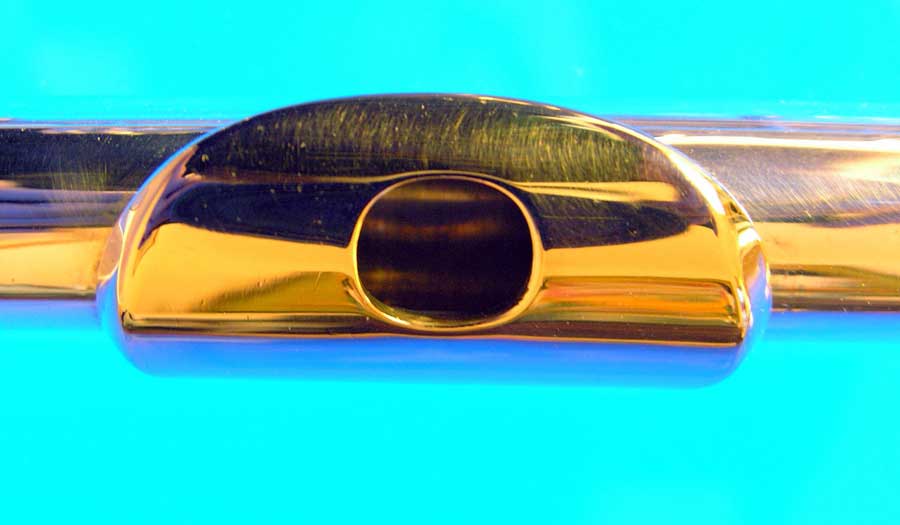 This lovely lipplate is of .750 18k Plum gold, the finest quality of 18k. The hole is very small, yet the power of this flute is amazing. The low notes rumble, and the high notes sing. The sweet-spot is very small, and requires a good embouchure with precise lips, in the best Lot tradition. 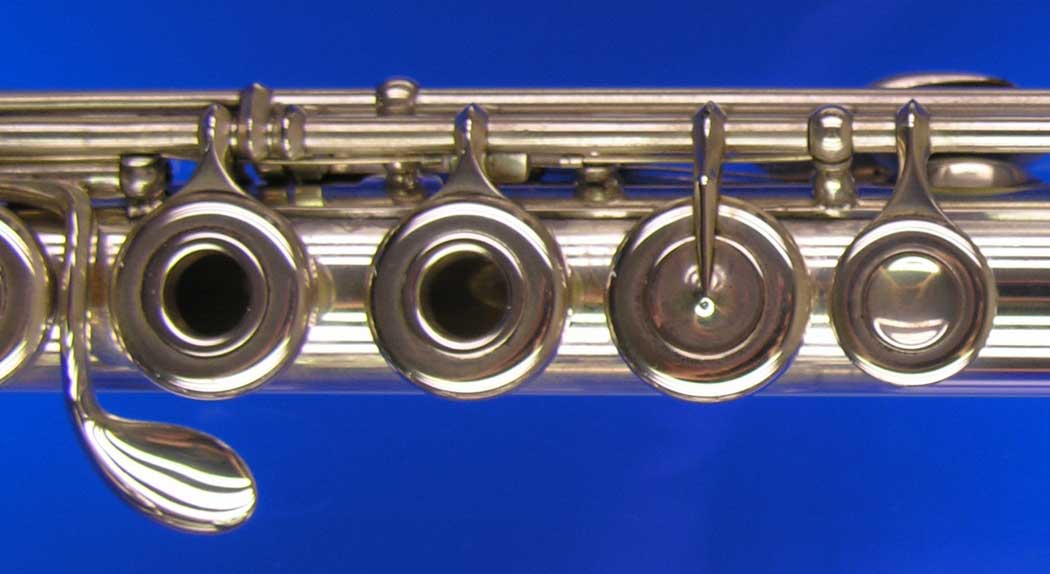 Louis Lot's perfect right hand. Why change something that was right the first time?

This glorious flute, of the very finest Louis Lot quality, in possibly the original case. 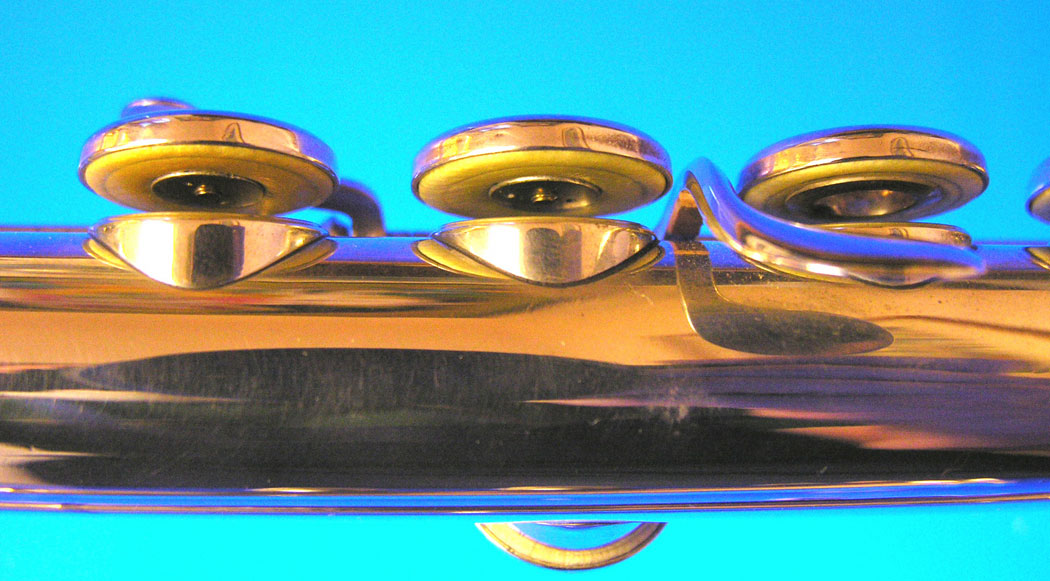 Lot changed the design of his pad washers over time. These are flatter and simpler than his earlier washers. 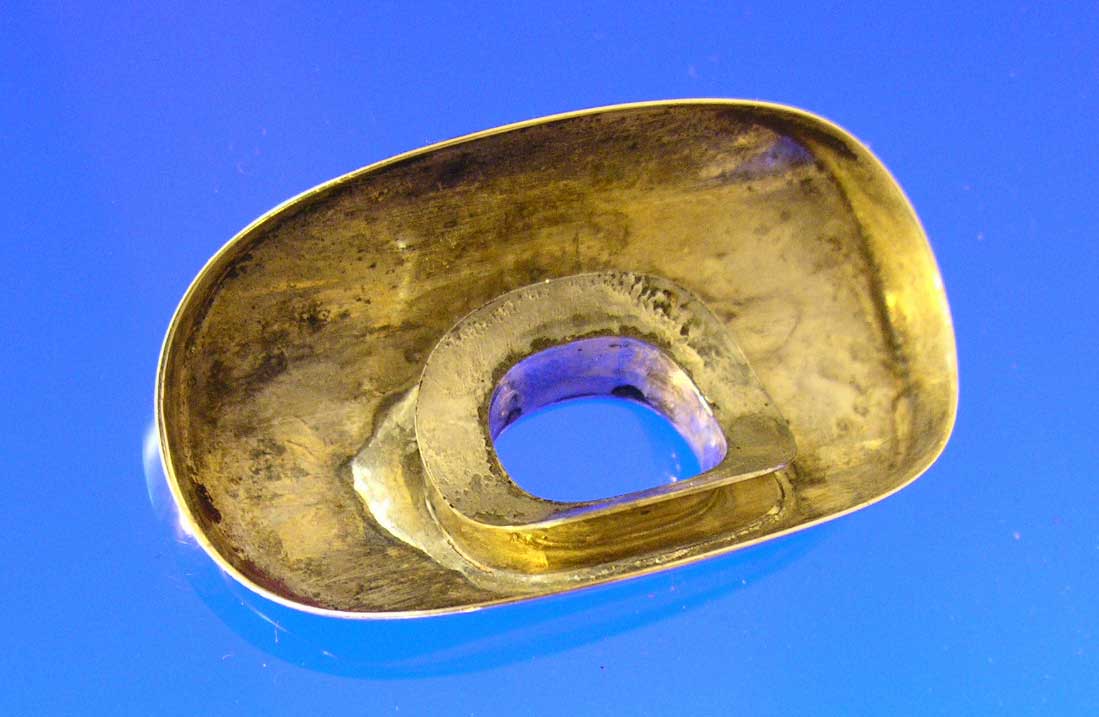 This is the bottom of the original lipplate, showing the upper flange of Lot's "improved" chimney design. We call these the "over and under" chimneys; Lot may have called this his "embouchure unie". At any event, someone Cooperized this lipplate, so it was replaced with the earlier Gold lip.

Here are the original lips (left), and the "new" gold lips (actually from a much earlier Lot). The cut-away side edges of the silver lip can be seen in the almost oval shape.

Gold flange and chimney. No upper flange, since this plate was probably made in 1858 or so.

Louis Lot's footjoint design is so wonderfully simple and perfect. Here the big C key wrapped around the C#, which is pinned to the rod. The C# key works on it's own, but pressing the C lever automatically carries the C# with it. This picture also shows a nicely preserved crab hallmark, foolishly pressed into the delicate hollow silver rod!

This is the bottom of the thumb key, where the only hallmark from Paris exists, namely this tiny boar's head.

The outside of the case. 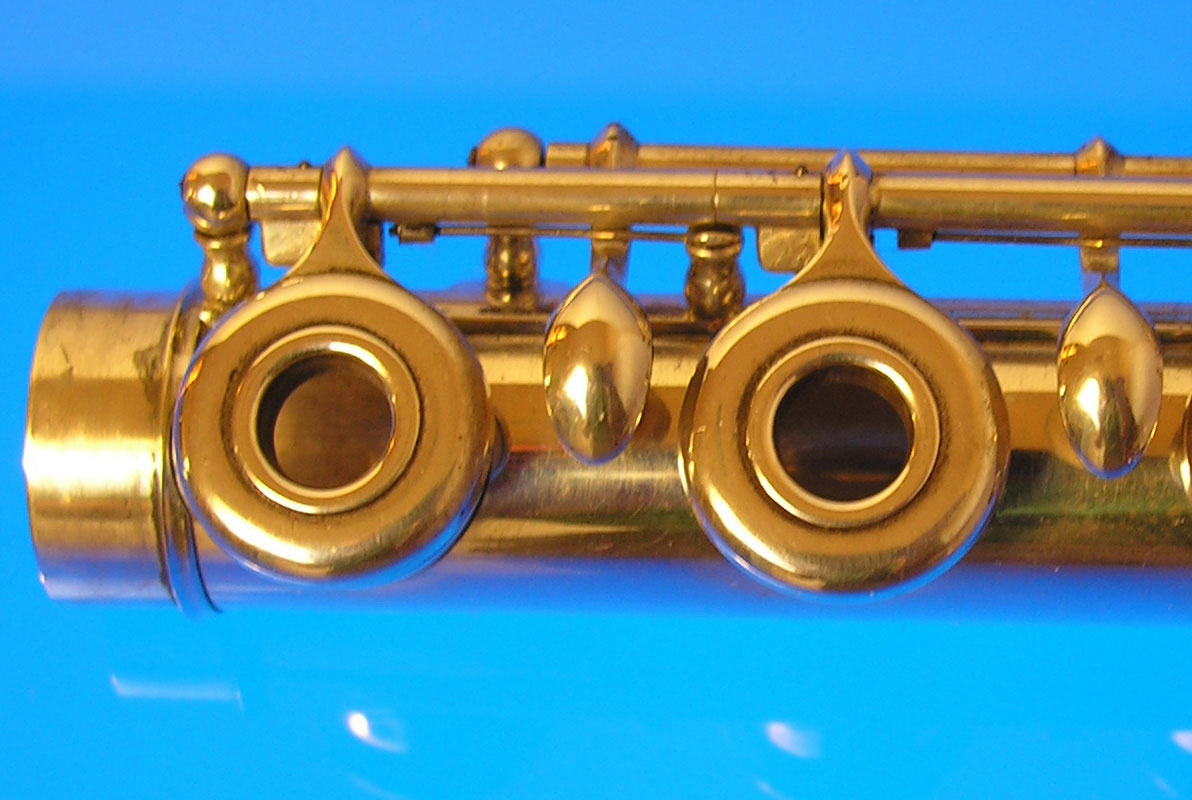