Comments: There are many Native American flutes known, but I am not familiar with any that look quite like this. The photos of the Hopi Indians at the spring by Curtis come the closest, but these are not sinew bound, as far as I can see. Furthermore, other photos of Hopi flute players make me suspect their instruments are edge-blown, like the Shakuhachi.

Material: We are posting this very interesting flute in the hopes that someone out there will know what it is. We purchased it from an antique store in Washington state, where it had been sold by an Native American Flathead trader with no history (the flute had no history; the trader's history would have negated any story about the flute at any event, we were told).

System: This fipple flute has quite clearly been very carefully made. The tone holes are actually broadly undercut. The flute is bent to make it easier to play, since it is so long. The bore has been hollowed out by splitting the wood. The bottom is partially stopped, with a small center hole. I thought this might be a node in the wood, like bamboo, but Laurence Libin pointed out that the maker simply didn't hollow out all the way to the end. Nonetheless, the type of wood is unknown (here anyway). The wrappings appear to be animal sinews. An iron (?) wire, about the size and shape of a coat hanger, was used in an apparent repair at the mouth of the flute. This is a true fipple flute, built like the recorders, with an inserted block, windway, and carefully cut and shaped fipple. The block is awkward compared to the rest of the flute, but certainly looks contemporary. The Native American flutes in the Miller Collection are principally activated by a tie-on fipple, not the cut windway as on this flute.

Condition: The condition is preservable. Major constriction of the lower half of the split wood, especially through the curve to the mouthpiece, renders playability unlikely. There seems to be mud imbedded in the sinews, yet the bore is relatively clean (except for a few bugs). 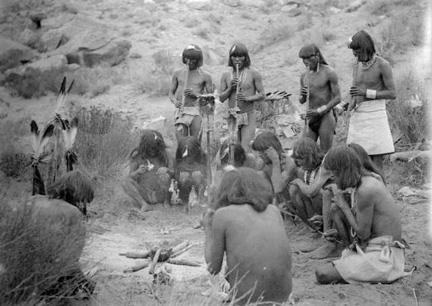 Hopi Flute priests performing a ceremony at a spring. This anonymous photo, from the Denver Public Library, is beautiful, but not necessarily relevant. 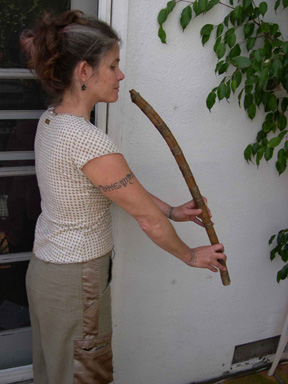 The bottom three tone holes. These are carefully cut, and undercut. The tone holes show classic wear from substantial use.

This flute is almost 30 inches long, or twice the length visible in this photo. 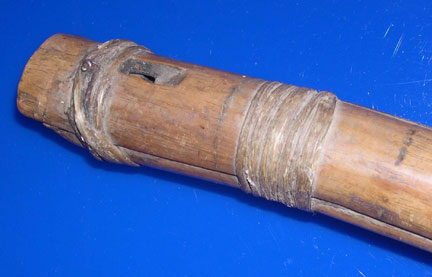 The upper end with carved windway. The animal sinews, the split for carving out the bore, and the metal wire repair are all visible here. 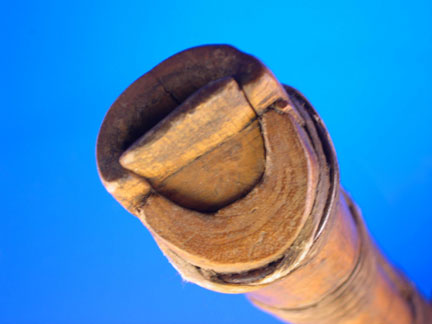 The block protrudes, even as it has been pushed in a bit too far. The curious porous grain looks sort of like a Palm with growth rings. 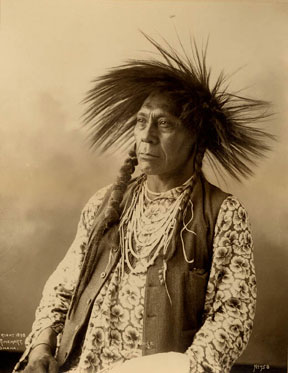 This Flathead Indian's name is Antonne Moise; obviously a flute player considering his famous last name. The Flatheads, incidentally, were so called by the tribes who shaped their baby's heads into a nice point, and thought the naturally-headed Flatheads uncouth. 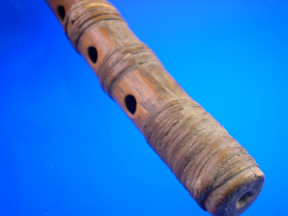 The bottom of the flute, showing the strange hole in the otherwise stopped tube. This hole looks worn from other causes that the tone holes. It is much rougher, as though weathered, or carved with a gouge. 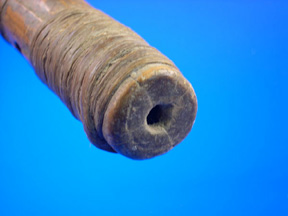 A closer view of the bottom. Not only is a pure fipple flute unusual, but a split-tube, curved flute with partially stopped bottom is completely new to us. 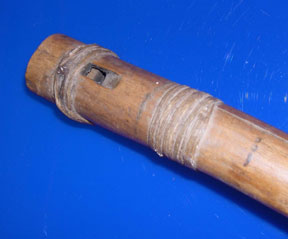