Marks: The initial "M" is neatly stamped at the top rear of the wooden headjoint. Thanks to the Rudall Carte scholar Robert Bigio we know this means the headjoint is lined with "Monel".

Comments: This is an extraordinary example of what we believe to be the finest wooden Boehm system flutes ever made, namely the Carte thinned wood one piece body model. These flutes have the warmth and character of early flutes; the proscribed, delineated parameters of tone, within which the most wonderful, pure and focused sound, with prodigious gradients, exists. Although this is a thoroughly modern flute, it does not at all have the modern tendency to drive the player down a road that is already chosen. Rather, this flute is more like a paint brush with a glorious palette full of colors, ready to paint pictures of romance, pathos, ecstasy, and the dazzling darkness deep within. Fred Handke, the maker of this flute as listed in Carte's records, had the reputation of being Carte's finest flutemaker. Robert Bigio said this of Handke, "Handke (note the spelling) was known to all the Rudall Carte workers. They all said he was the best. Even Albert Cooper said it. I have a picture of Handke. He died in the 1960s. I remember Jim Howarth talking about him, too." (Bigio, personal correspondence).

System: This very beautiful flute is made with a thinned Cocus wood one-piece body, in the standard Boehm system, with a thinned wood Monel-lined headjoint, and an additional silver headjoint of surprisingly lovely playability. The footjoint is to C. Additional extras are the Brossa F#, the split E, and a "vented D key", which looks like a C# trill but plays D. This key, which has been disconnected, is supposed to be an adjunct hole to the D trill, making a true D which can then be used as desired (Bigio, and Rockstro p.185). The flute is described in a bill of sale from Edward Walker to "Lucy": "Your instrument is fitted with a "Vented D" key which makes a perfect tremolo from B-D, most useful in the last movement of the Ibert Concerto and it also gives a perfect trill from C-D in the second octave. You also have the Split E and a Brossa F# key, without which I could not live, as it makes many passages so much easier and more fluid." Edward Walker describes himself as principal flute of the London Symphony from 1946-1958, when he moved to the Philharmonia (Bigio questions the exactitude of these dates). Edward's father, Gordon Walker, was principal at the London Symphony from 1924-1946. Around 1955 he purchased this flute for his own personal use, and gave his old instrument, Carte #7620, to his son Edward. Gordon Walker then used this flute to his passing in 1965 (see original letter below).

Condition: The condition of this flute is modestly used and otherwise excellent. The wood is as new. There are no cracks or damage. The thinned Cocus wood is beautiful, and in perfect condition. The oval embouchure is perfect. There is no damage at all to the beautiful mechanism made by Fred Handke, which shows only modest wear from careful usage. This instrument originally was built with an open G#, according to the records from Carte's. The flute was returned, then evidently refitted with a closed G#, split E mechanism. It seems likely that the D trill was added at the same time as the independent G#, since both tone holes are ebonite inserts, and both cups use slightly different pad washers than the others. The flute was clearly rebuilt at Carte's, by the look of it, and most likely also by Handke (the records of the conversion are lost). No conversions are visible, for example, except the disconnection of the extra D; were it not for the records, the flute is practically virginal. 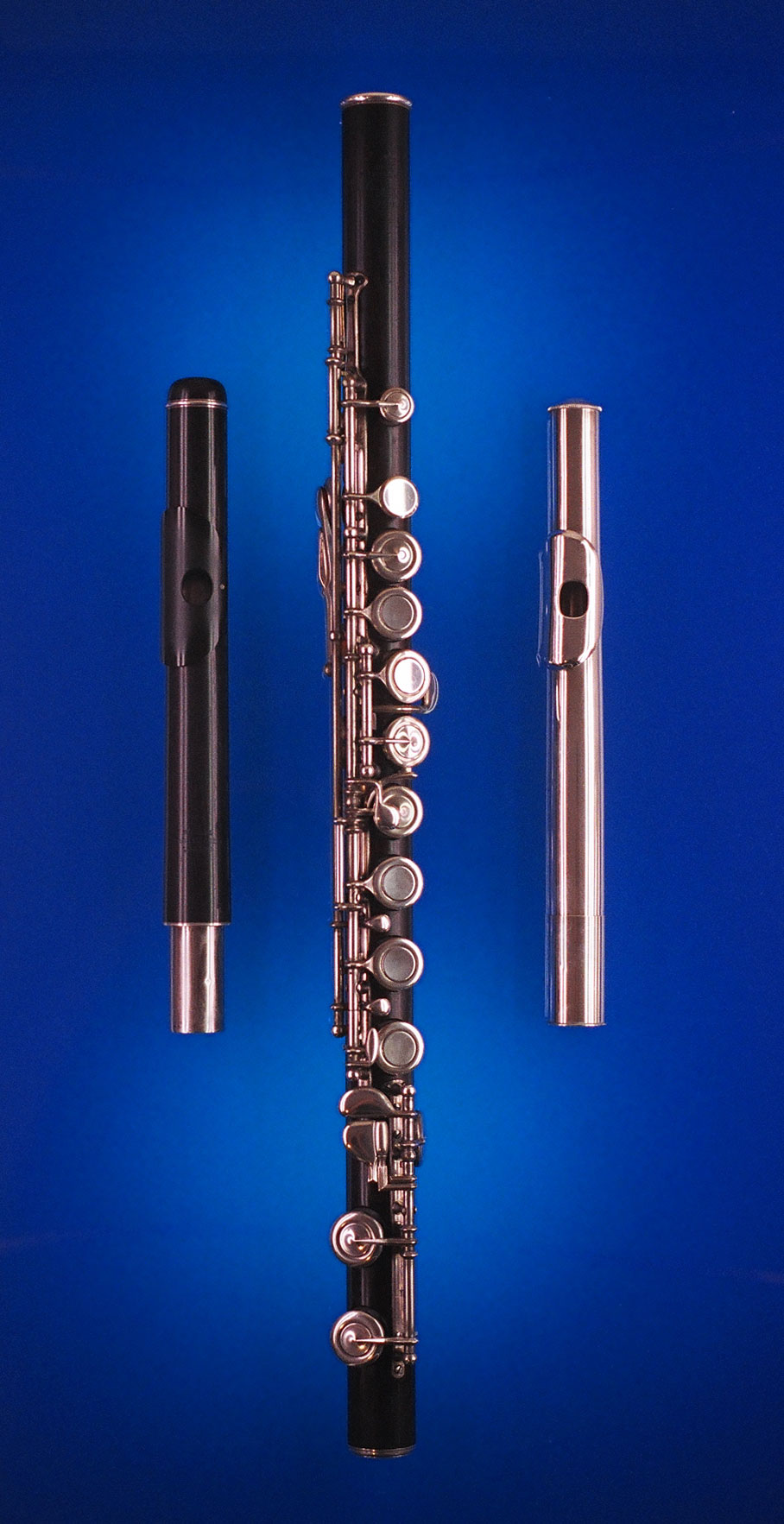 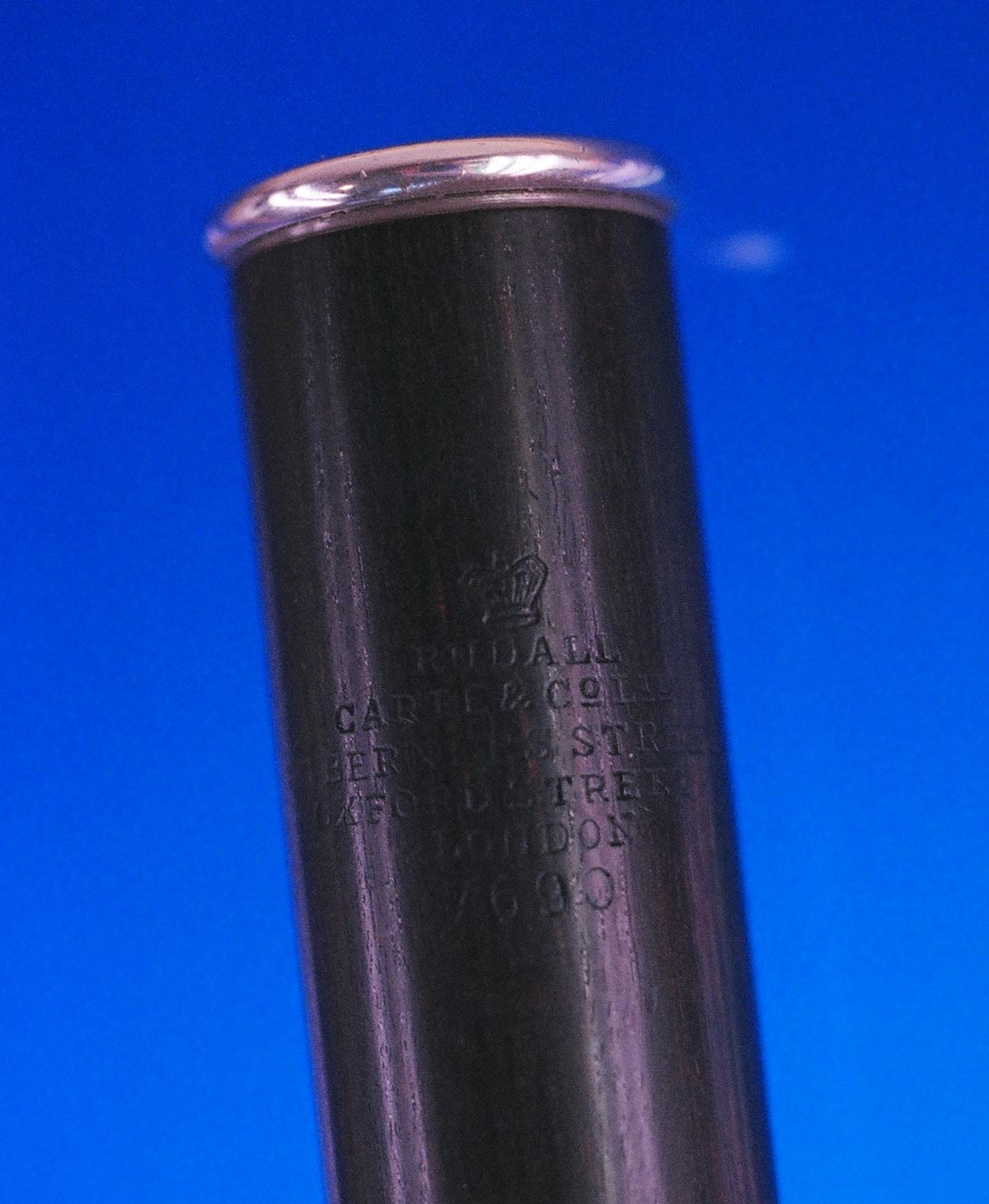 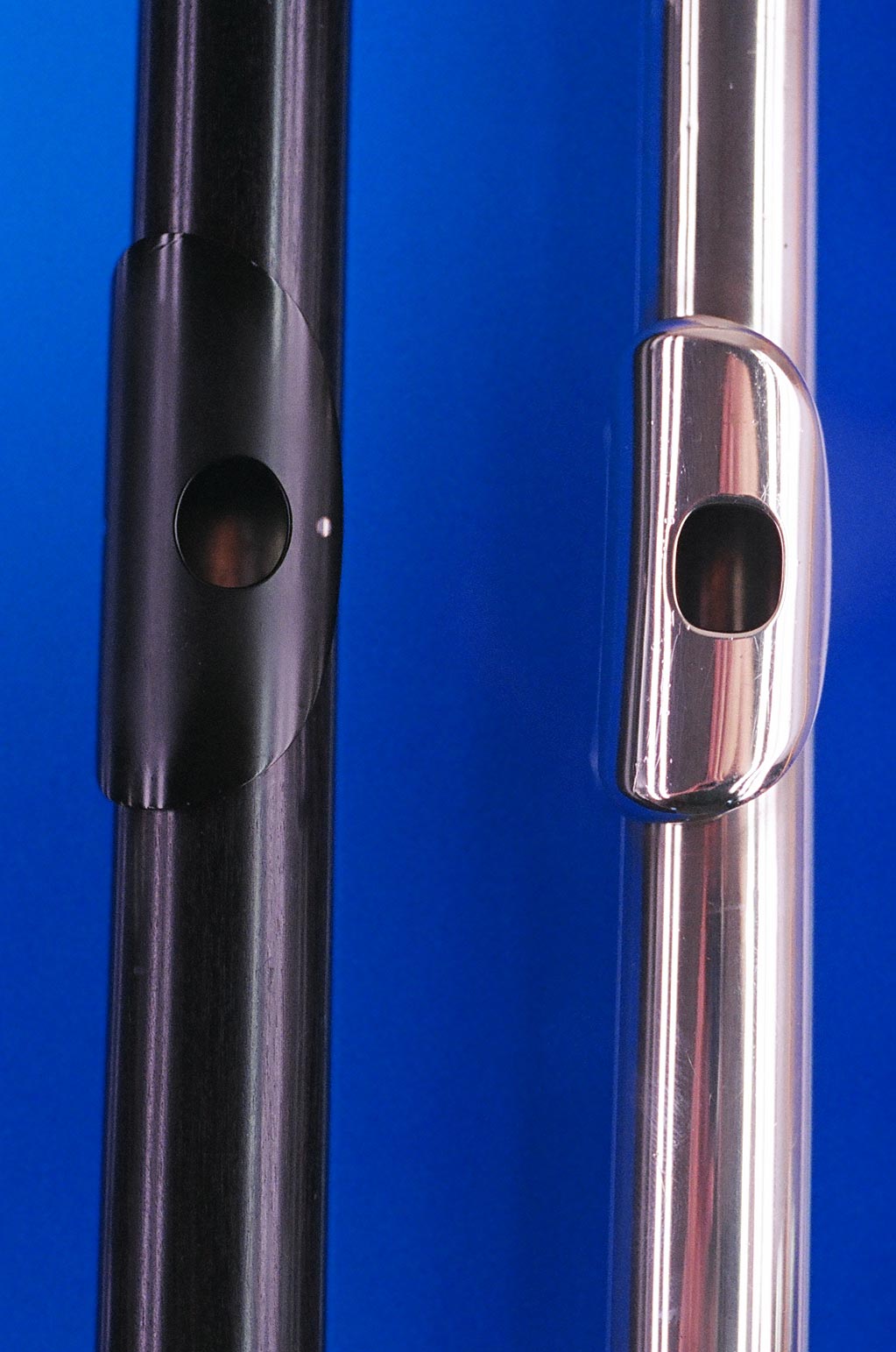 The silver headjoint, which actually sounds great, is a few mm shorter than the wooden head. The wooden embouchure is oval; the silver is a vaguely Cooper-like, side-opened rounded rectangle. 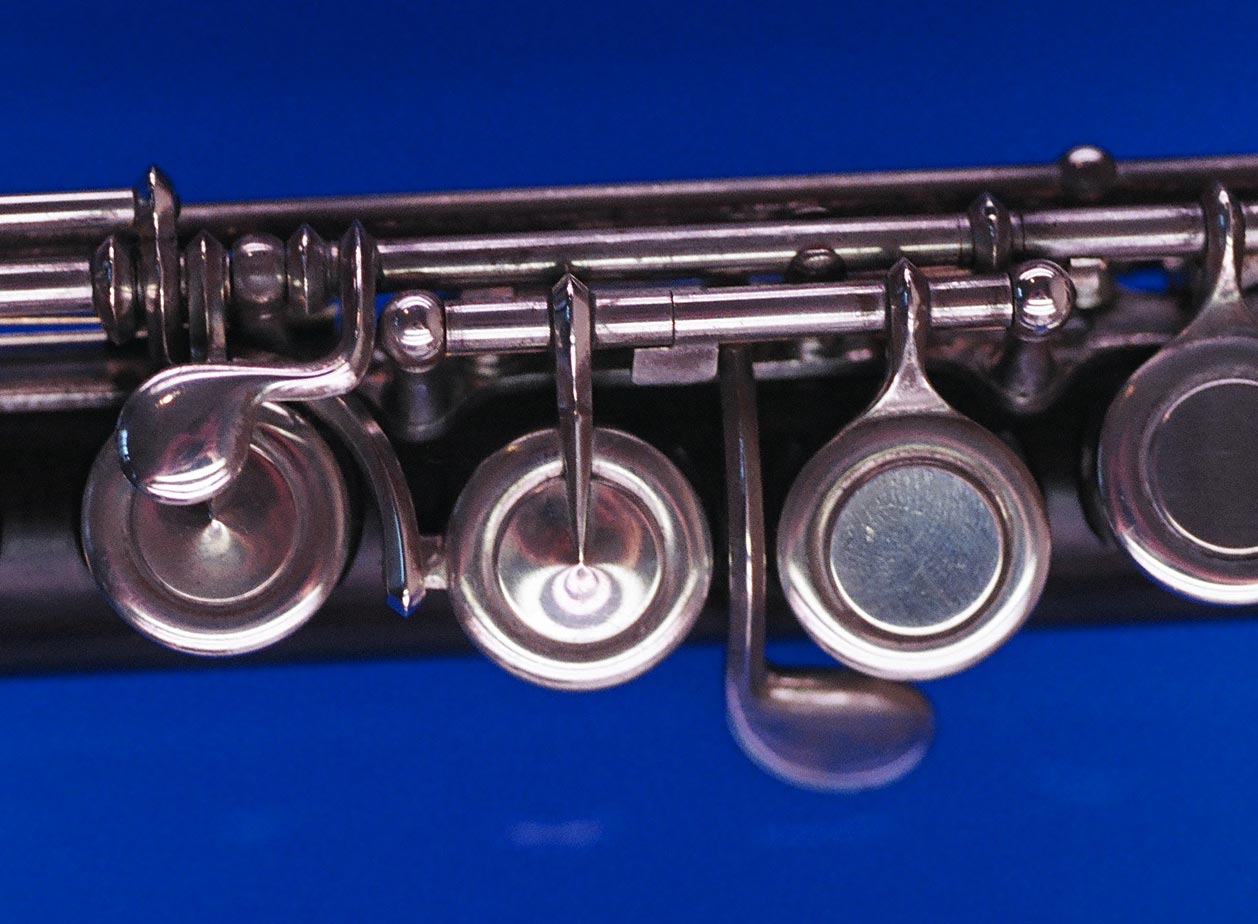 The split-E lever swings out to close the G# cup when the middle right hand key is shut.

The right-hand mechanism and footjoint touches. 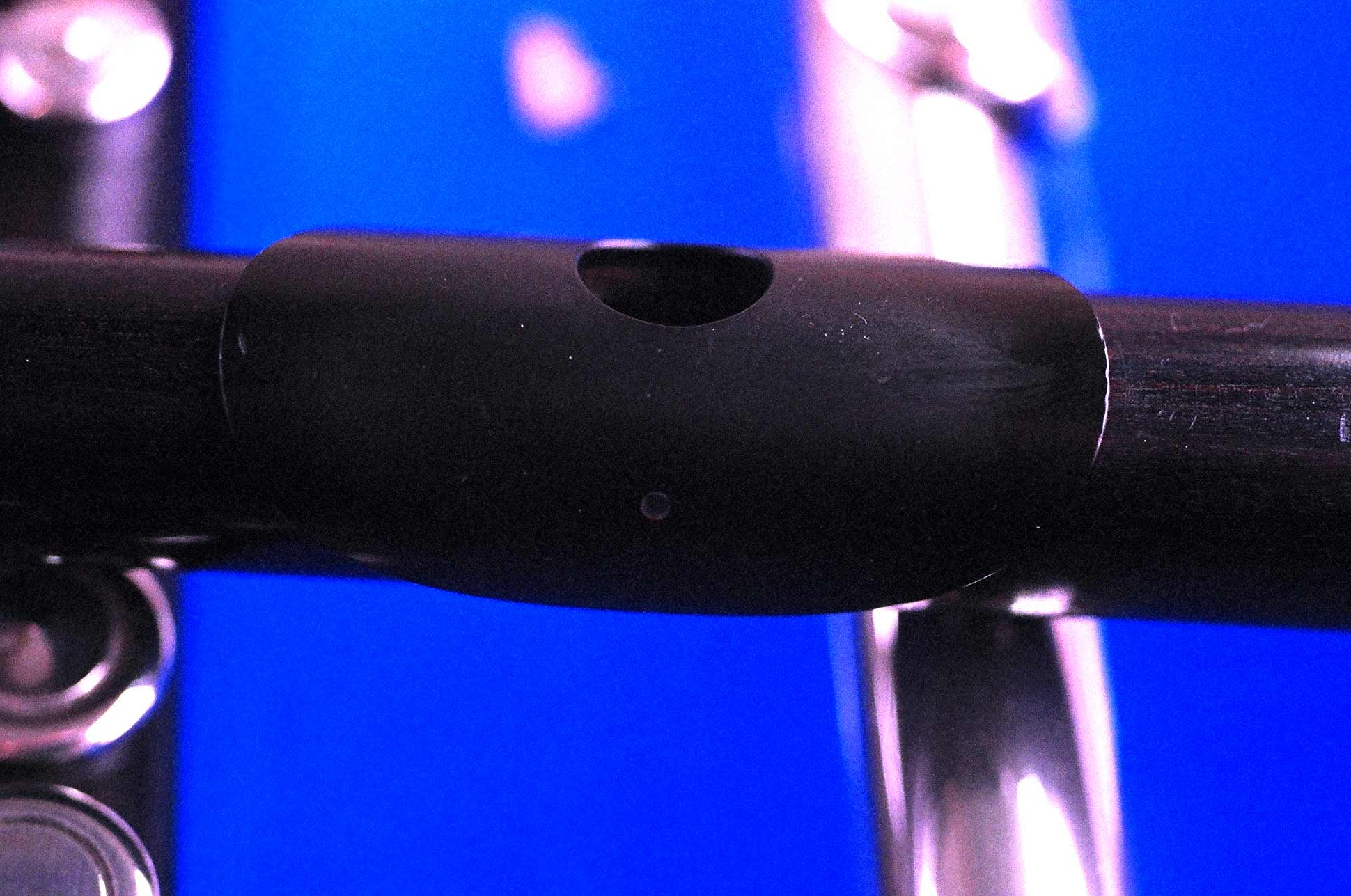 The lipplate is of ebonite. These were "a la Carte", and had to be ordered extra.

The big cup that looks like a C# trill is the "vented D", in-vented in 1877 by Rockstro (according to Rockstro), who called it (erroneously) the "open D", evidently to confuse it with Carte's different key of the same name. It has been disconnected, probably because the spring is a monster. 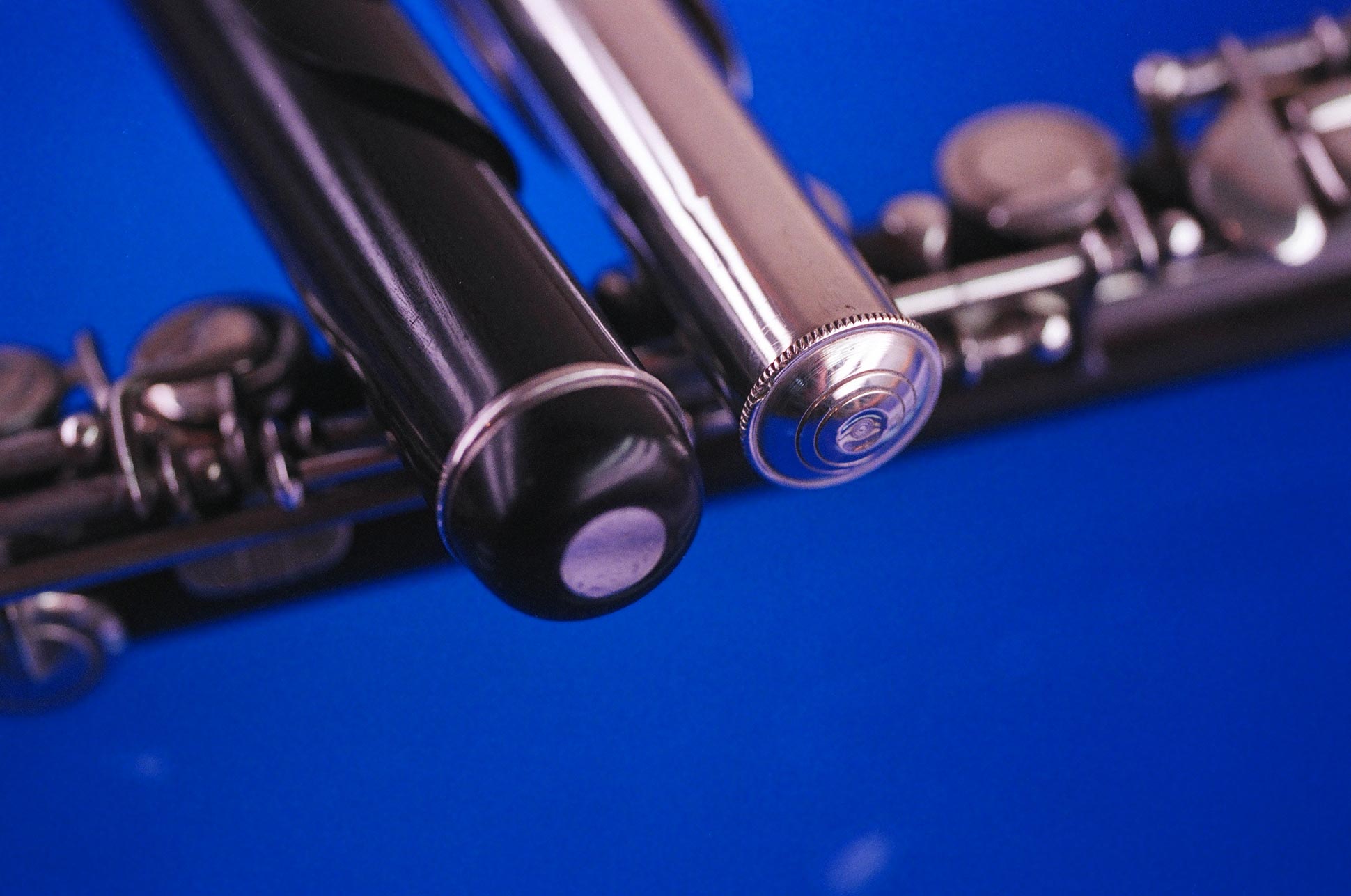 The silver cap looks very 50's like to me; perhaps this headjoint was made then. 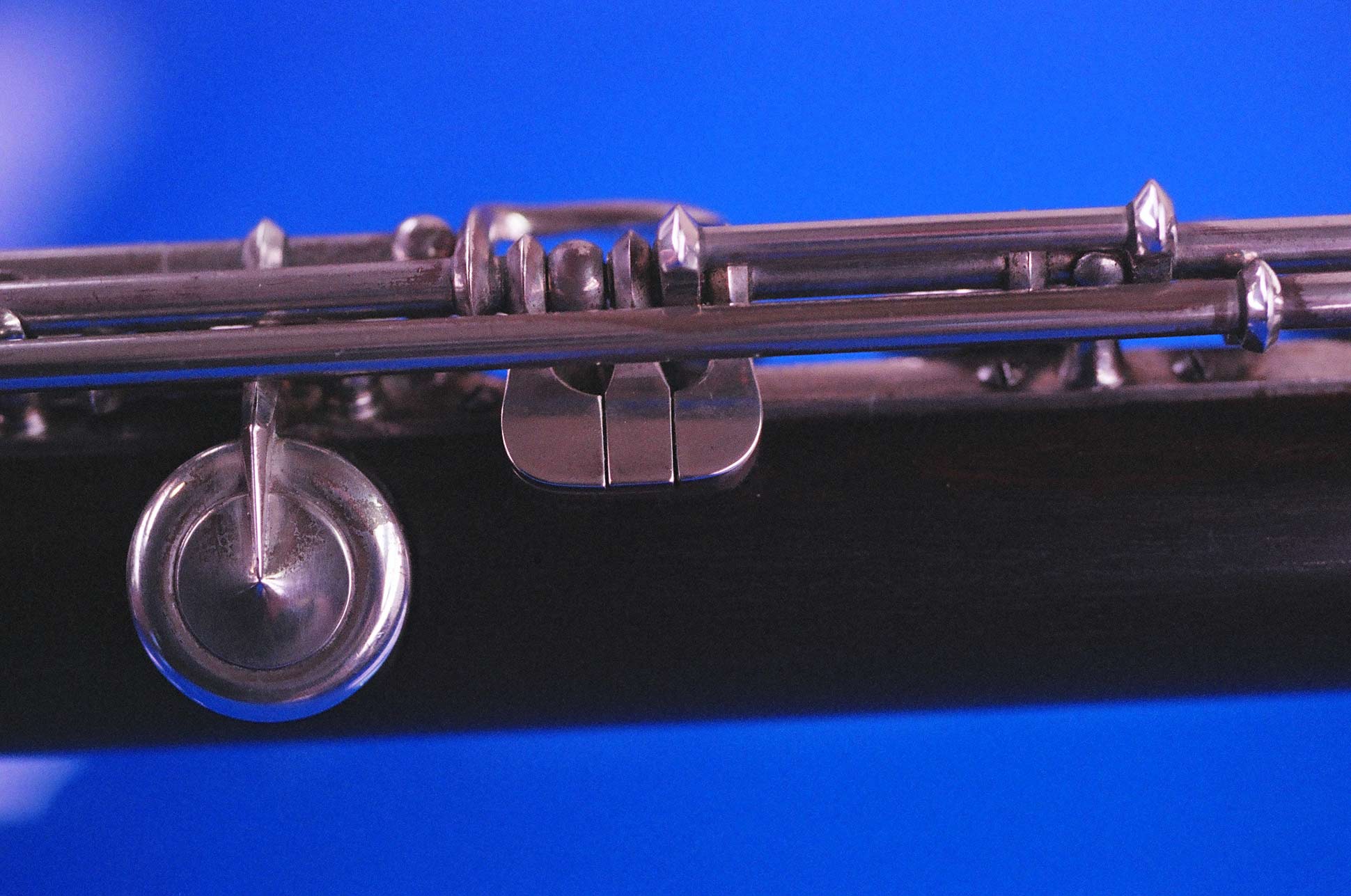 This back-clutch is a work of art, and is beautifully preserved. This is often the first place that poor repair work can be seen, and this flute has completely escaped such an ill fate. 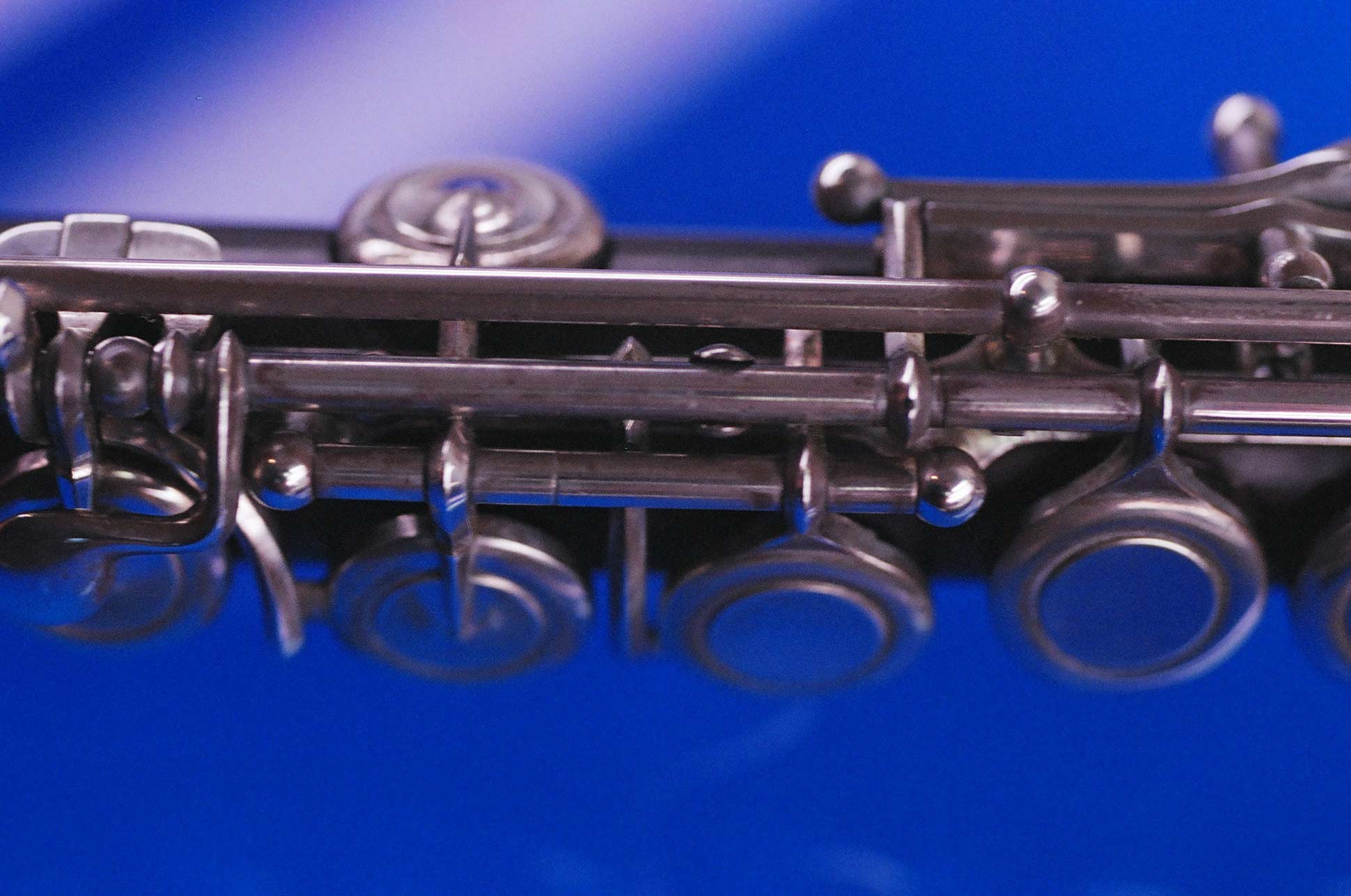 An overhead view of the split and offset G.

The magnificent "footjoint", also showing the raised E tonehole (actually the rest of the wooden tube has been cut away, leaving the toneholes proud). 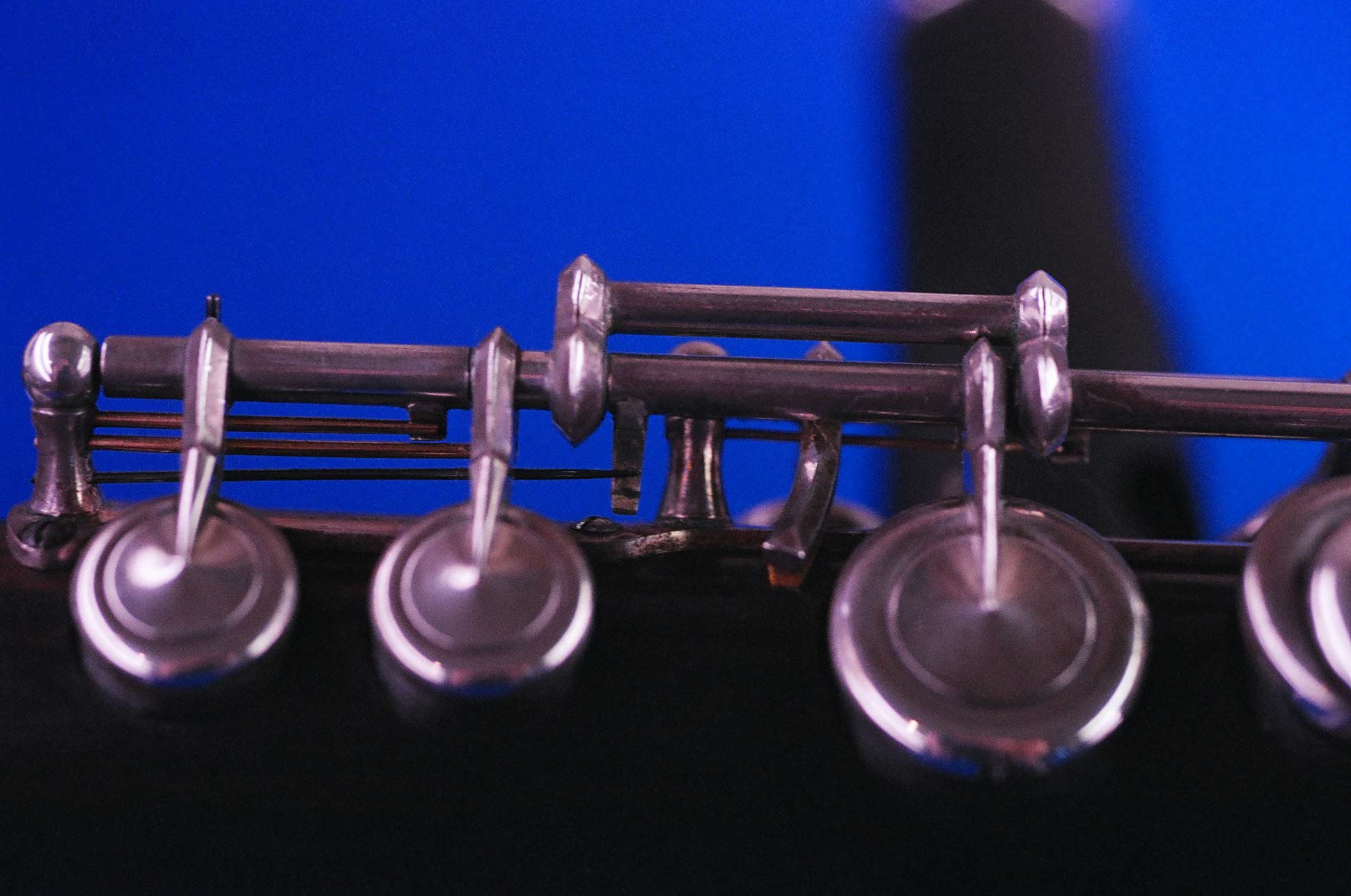 The "Vented D" mechanism looks more complicated than it really is. The overhead rod is only there to bypass the key, which otherwise would be part of the D trill rod. The long, dangling spring holder and the steel spring are added to keep this key shut.

The back of the flute begins on the left with a ball-ended thumb key (classic Lotfroy), moves past the added independent G# to the beautiful back clutch, and on to distinctive kickers and posts. 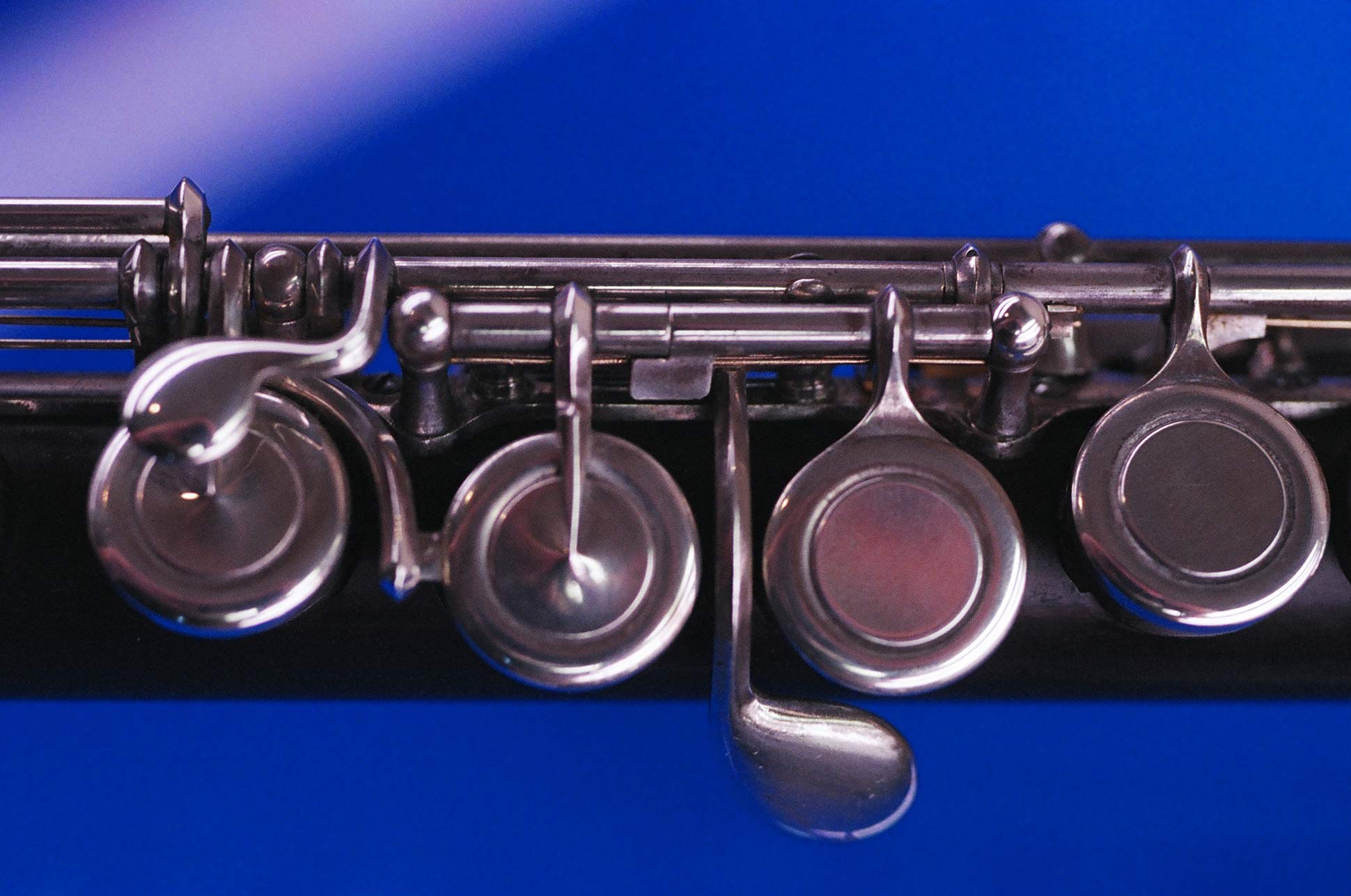 An overview of the G, G#, and split E mechanisms. 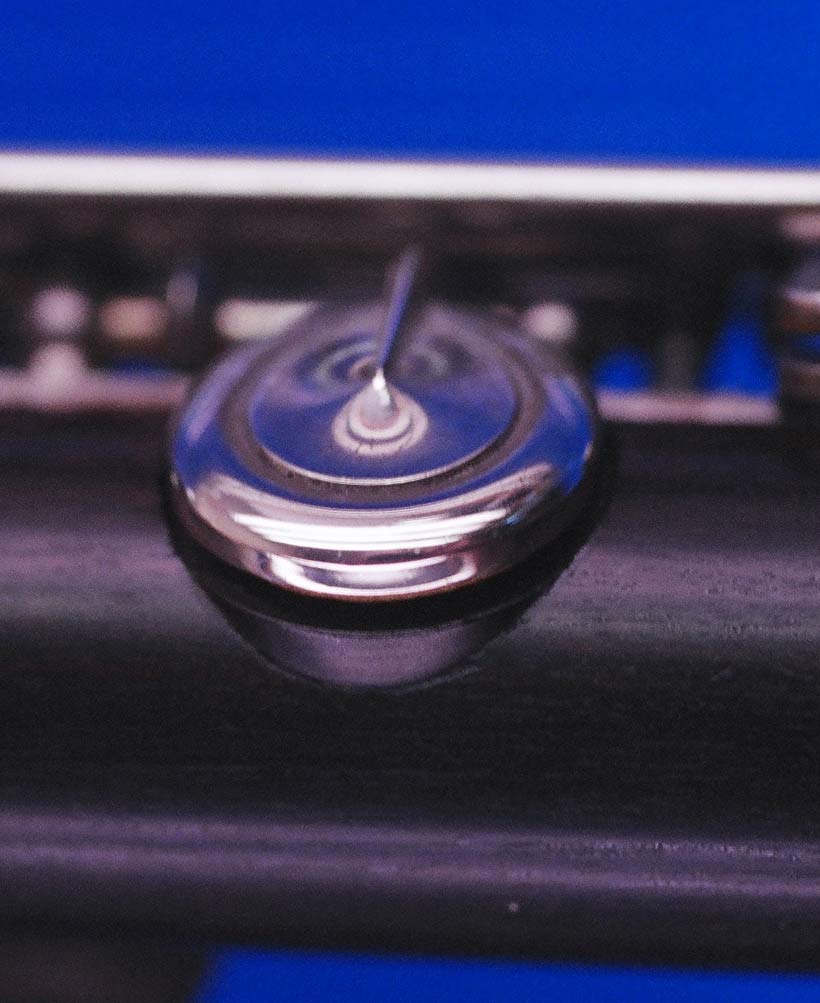 It is hard to see, but the tonehole for this side G# is an ebonite insert. Robert Bigio notes that a thinned tube cannot be altered once made except with an insert.

A peek up at the G# mechanism, evidently altered from open G# (Bigio/Carte records). 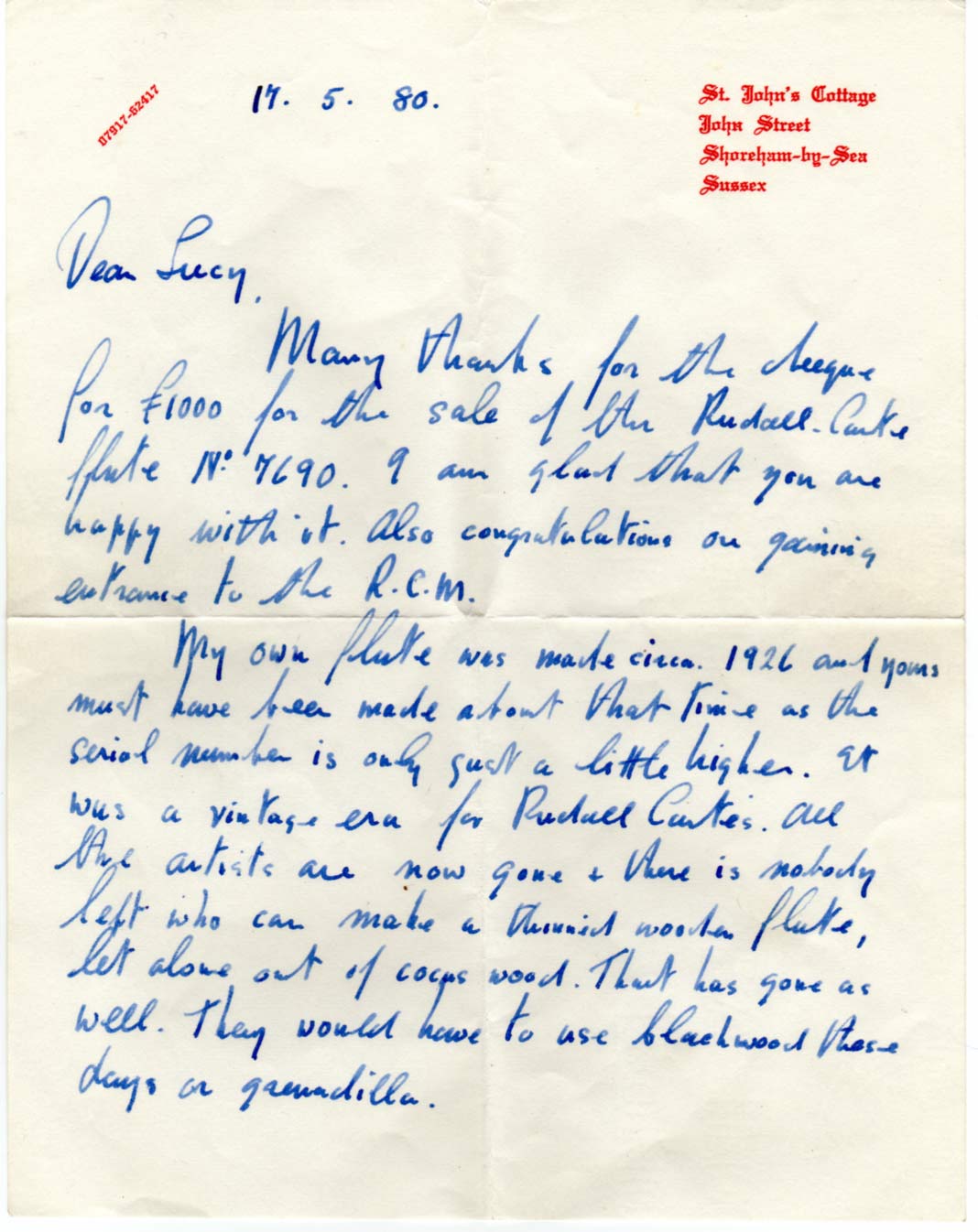 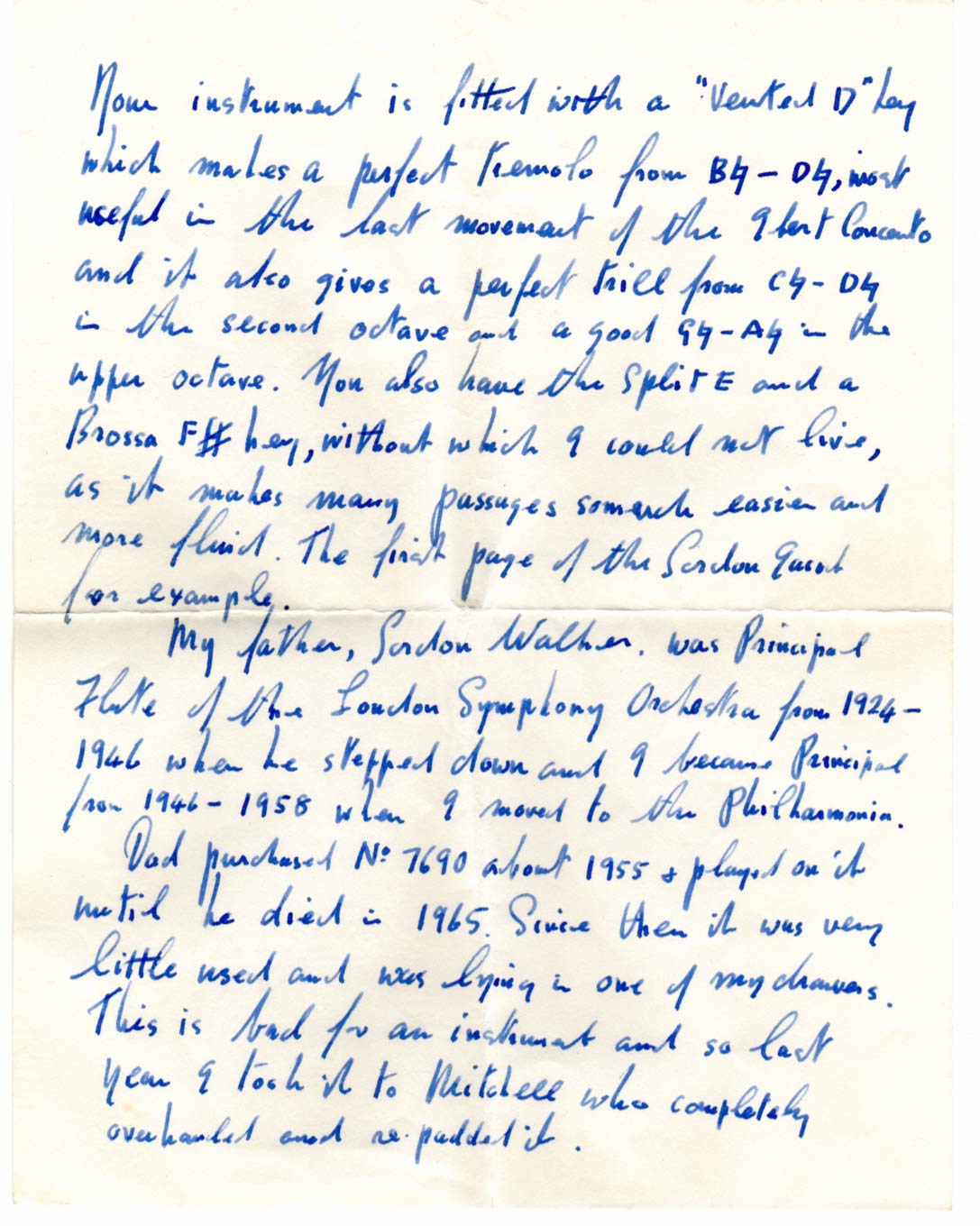 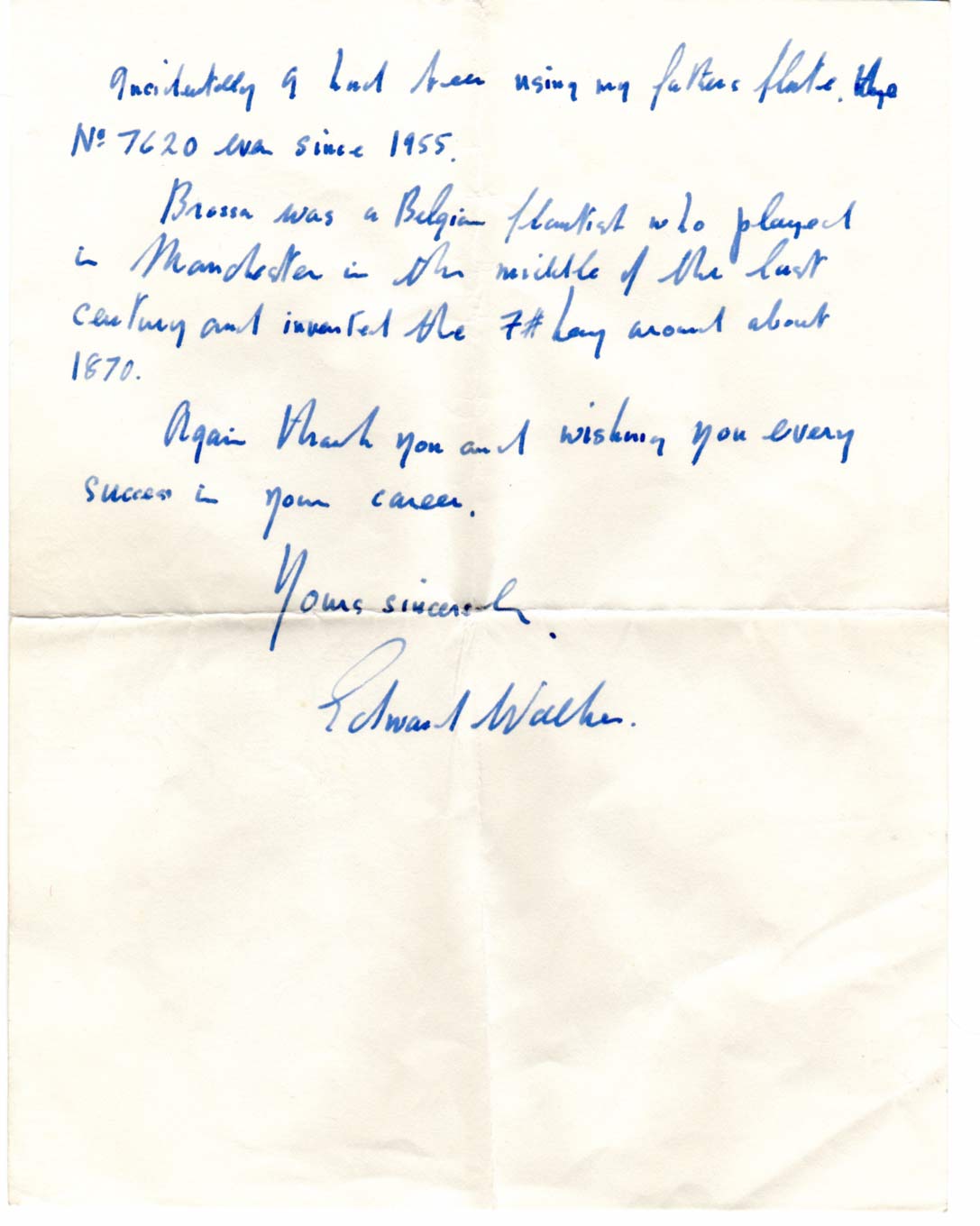