Marks: While there may well be discoveries yet to come, we have not dismantled this instrument, and can see no marks under the keys.

Manufacture Date: Made in 1843. The circumstances under which this flute was built are famous. From Richard Carte's "Sketch of the Successive Improvements made in The Flute", 1851 (2nd edition 1855): "It was not, however, until the year 1843 that it [the Boehm flute] attracted much notice in this country. Its auspicious introduction into the French capital, and successful progress in France, induced Messrs. Rudall and Rose to examine its merits, and to consider how far it might be acceptable to the taste of the English flute player. This examination proving satisfactory, so far as concerned tone and intonation, the two greatest essentials of a good instrument, they determined upon commencing the manufacture of it, in the year I have mentioned. And in order to do this most efficiently at once, they invited to this country the partner of M. Boehm, M. Greve, from Munich, to instruct the workmen, and superintend its production." (1855 ed. p.19). Richard Carte, a prominent London fluteplayer, helped Rudall and Rose, the preeminent English flutemakers, to decide to make a flute based on Boehm's new system. They brought over to London the most famous maker of these flutes, namely Boehm's own flutemaker, Rodol. Greve. Greve, to whom Boehm had sold the rights to Boehm's own name on flutes, worked for several months with Rose and Rudall, and this is the fruit of that work. As Rockstro,Welch, and Fitzgibbon all say, there was a flurry of newspaper activity surrounding the release of this flute. It is certainly possible that Richard Carte received this very flute. I suspect that further study in English periodicals might well unearth reference to this specific instrument. If this was Carte's flute, then it was probably Rockstro himself who changed the springs. This is the first Boehm system flute by one of the most revered flutemakers in the world, made with the help of Rodol Greve, the flutemaker first to bring Boehm's ideas to reality.

Comments: An extraordinary piece of British history has come briefly to rest in our hands. The making of this very flute was a hugely contentious issue in London during 1843. Fluteplaying was of extraordinary importance in British society at this time, and many people had very strong opinions on the matter. Tone and expression were cultural treasures, to be defended if necessary. The English mastery of the keyed flute was considered supreme, and foreign tones were viewed with great suspicion. Rockstro says, "In 1843, amidst a storm of opposition, Mr. Carte, and after him the late Mr. Clinton, adopted this instrument, and Messrs. Rudall and Rose began to make it." (1890, p.367). Welch, in his "History of the Boehm Flute" (1892) devotes 33 pages (116-149) to a few of the many letters published in 1843 in reaction to the event that this flute so beautifully symbolizes, namely the momentous change in the British flute tone, as the Nicholson flute was put to rest. This is the very first British Boehm flute. Furthermore, the firm of Rudall and Rose continued on to form a powerful triumvirate with Boehm and Louis Lot, whose works set the stage for every flutemaker since. This instrument is so different from the eight keyed flutes of Rudall and Rose, it is amazing to see the new techniques that had to be learned to build these flutes. The mechanism and bore are entirely new to Rudall and Rose. This first flute is practically identical to the existing flutes made by Greve. Rudall and Rose did not begin to substantially change their flutes until they had built at least five flutes like this one, since Rudall and Rose #5 (in the Peter Spohr Collection) is similar to this instrument. Their changes eventually involved thickening the mechanism, more like the flutes of Godfroy, but keeping a smooth, English finish.

Material: Made of beautiful, rich Cocus wood with silver keys and trim. The original springs are flat gold, tipping onto raised wooden pillars, or pedestals, the springs set where possible with Greve's signature double silver rivets. The very short springs on the two right hand ring sets are broken, and replaced with steel needles. The upper needle sits into an added (and elegant) spring rest; the other added one has fallen off. The flat, probably steel, spring on the D# key is a replacement, as are the similar springs on the upper C# and G# keys. In short, the original springs remain on the thumb key, the thumb key trill key, and the footjoint keys for C and C#. The original spring remains on the upper vaulted clutch, but is superseded by a steel needle. The pads are held in with apparently washerless screws. Interestingly, Rockstro talks of borrowing an early flute like this from Richard Carte, "Notwithstanding the apparent simplicity of Boehm's machinery, which was precisely similar to that shown in fig. 56, it was constantly out of order. The springs, which were thin, short, flat strips of brass [sic], were especially faulty, and although the instrument in question belonged to my good friend and master, Mr. Carte, who had kindly lent it to me, I took the responsibility of replacing some of them with steel ones [very sic]. Several of the pillars, which had become loose, I fastened with cement." (1890, p.331). This comment could well describe the amateur work that has been performed on this historical instrument, which easily could have belonged to Richard Carte, a student of George Rudall's and one of London's first performers (if not the first) on the Rudall and Rose Boehm flute. The likely connection to Carte, and the illustrious place that this very instrument had in London in 1843, will have to be the subject of study of someone closer to source materials. With this prominent serial number, and the strong emotions of the day known to have been published, I am sure a search of archives will be very fruitful.

System: This is Boehm's 1832 system, with the full, delightful and prophetic system as he originally designed it. Rudall and Rose have added their own contribution of 1832, namely their extraordinary Patent headjoint. This masterpiece of engineering, far more complicated than Boehm's mechanism, involves extremely precise lathework. The central function of this mechanism consists of a threaded rod divided in the middle and mathematically proportioned with threads of different grade. When the cap is screwed, the embouchure extends quickly away from the body to lower the pitch, while the headcork slides ever so slowly in the same direction, thus closing the space between the embouchure and the cork face, and keeping the octaves perfectly in tune. The late Jim Howarth explained this mechanism to me a while ago, and he was so impressed with Rose's extraordinary lathe work he jumped up (literally) and quickly set a piece of wood into his overhead treadle lathe. He wanted to demonstrate what he called a "four start" screw thread, which is the heart of Rose's mechanism. Even Jim quaked at the thought of dismantling and repairing these magnificent headjoints.

Condition: The condition of this flute is very good, yet fairly well used. The patent head works perfectly, but is a bit stiff. There are two cracks in the headjoint; one an invisible hairline through the embouchure. The barrel is cracked once, fairly insignificantly. The replaced springs have been discussed elsewhere. No changes have been made to the mechanism.

Case: In wooden case with a nice English 6 keyed piccolo, a Hawkes and Son Excelsior Class. 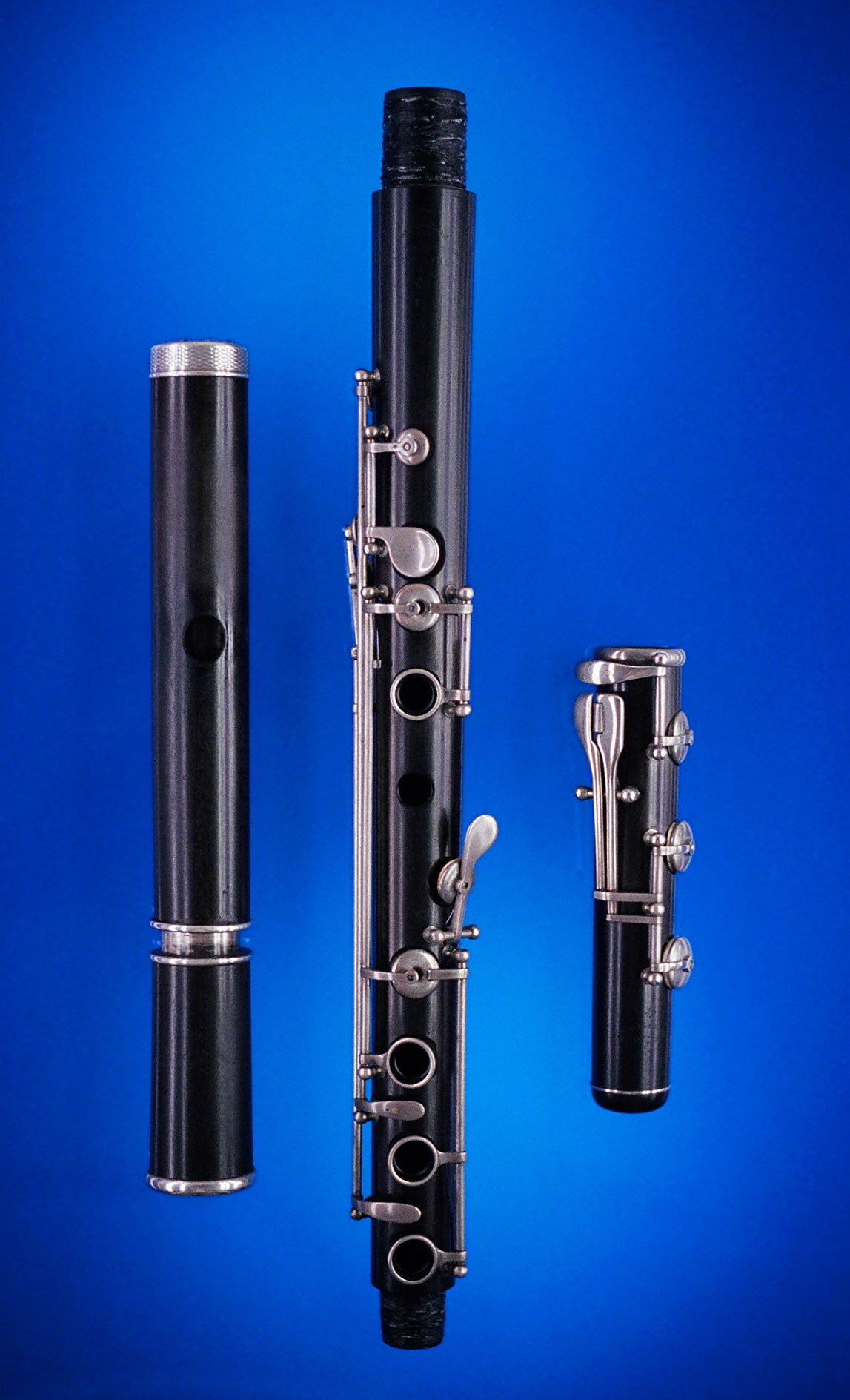 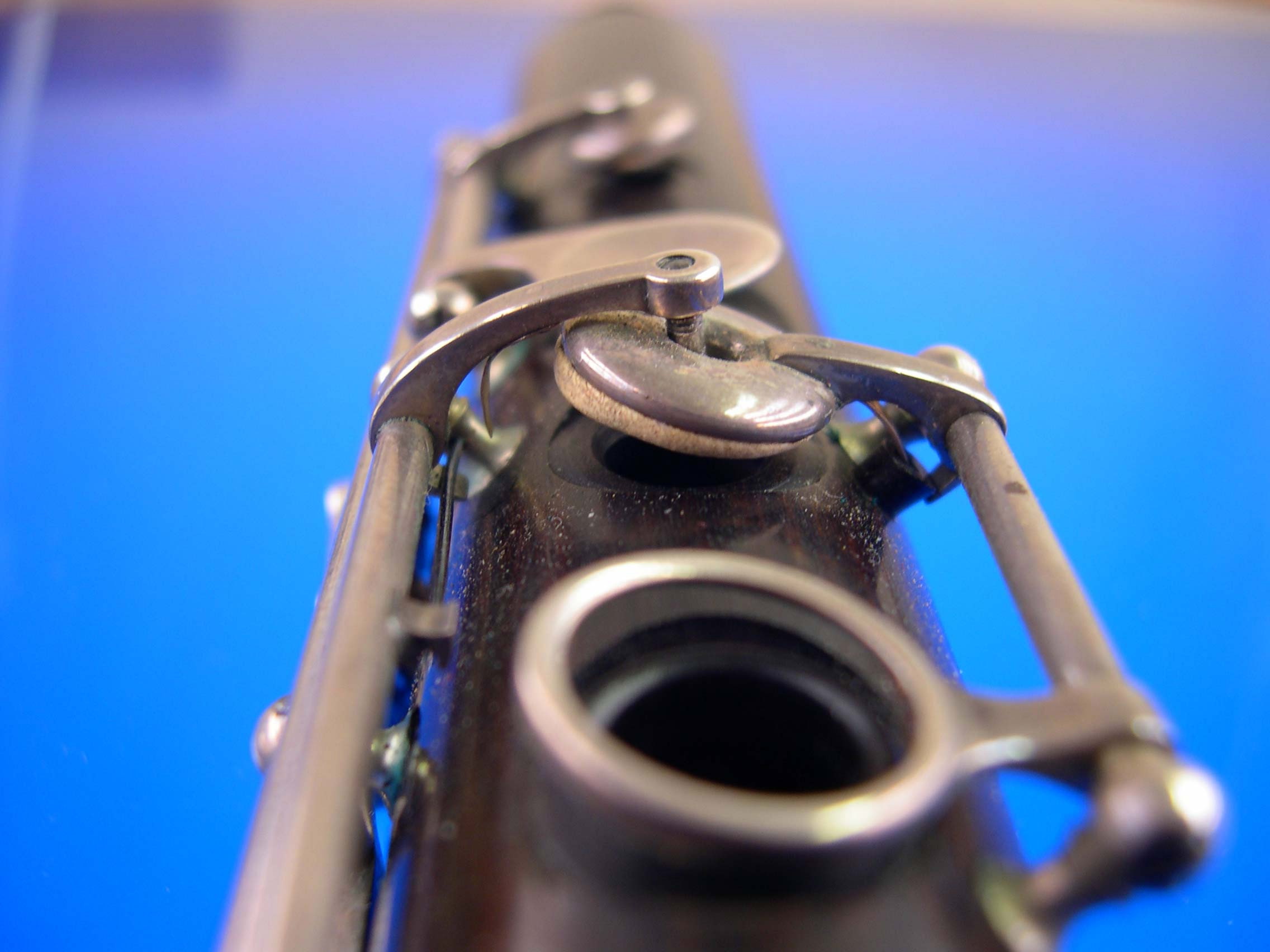 This is the upper vaulted clutch as designed by Greve, who, with Boehm, first invented this clutch. Note the flat and square character of the curved clutch arm, and key arm. Rudall and Rose began building Boehm system flutes based on the original heavy and thick German design, avoiding any hint of the French versions.

This is the classic Greve footjoint design, with the slight modification of the little roller for low C. A brass rivet is visible on the D# touch, which Greve would have hated. His beautifully hidden double silver rivets and original flat gold springs remain on the C and C# keys.

Here is the long back side of the original Boehm system. There are only solid rods. Both vaulted clutches are connected to the same rod, and the F ring. The middle rod is for the D trill, and the bottom rod is for trilling the thumb key (B trill, or C trill in French). 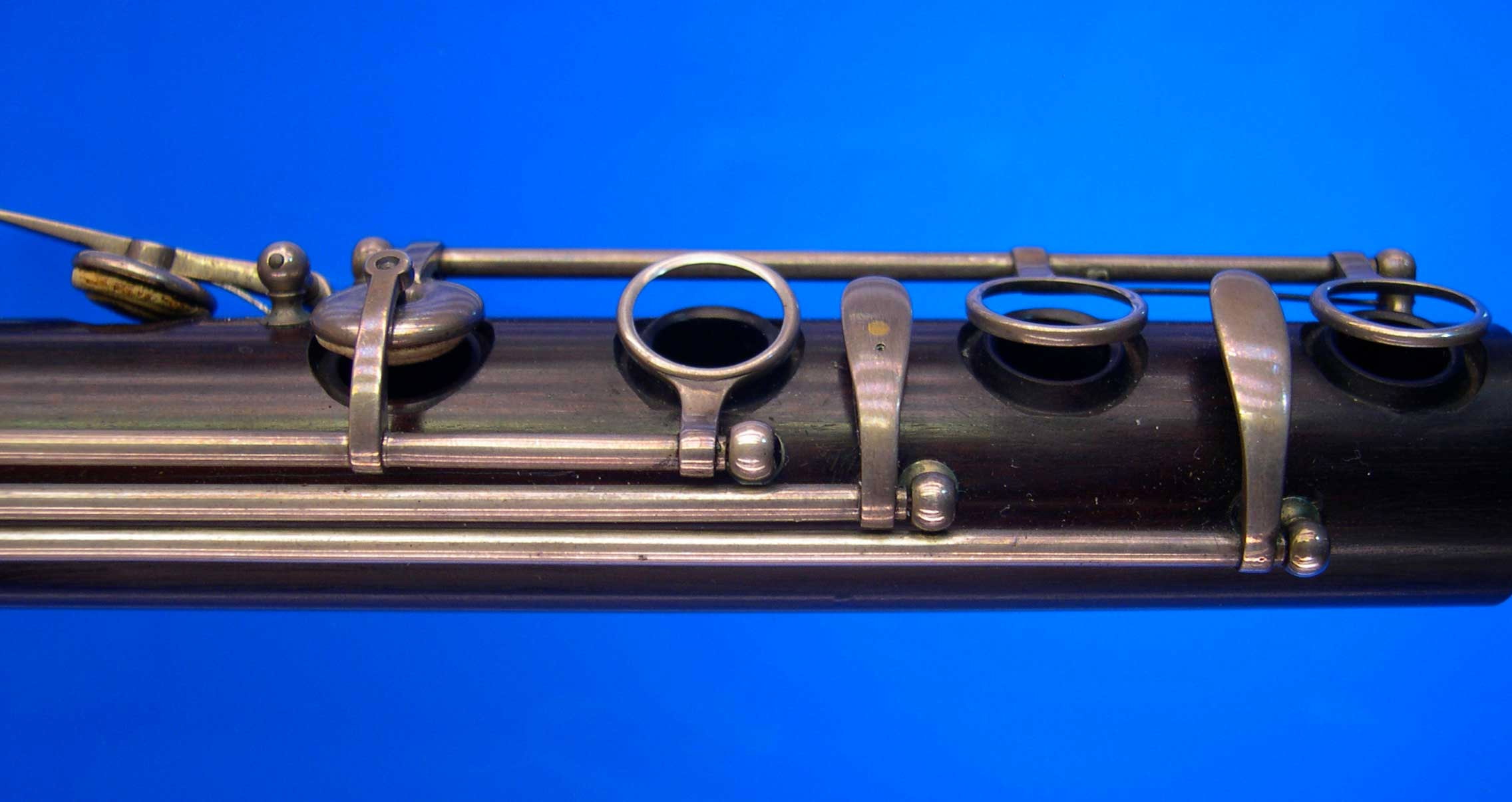 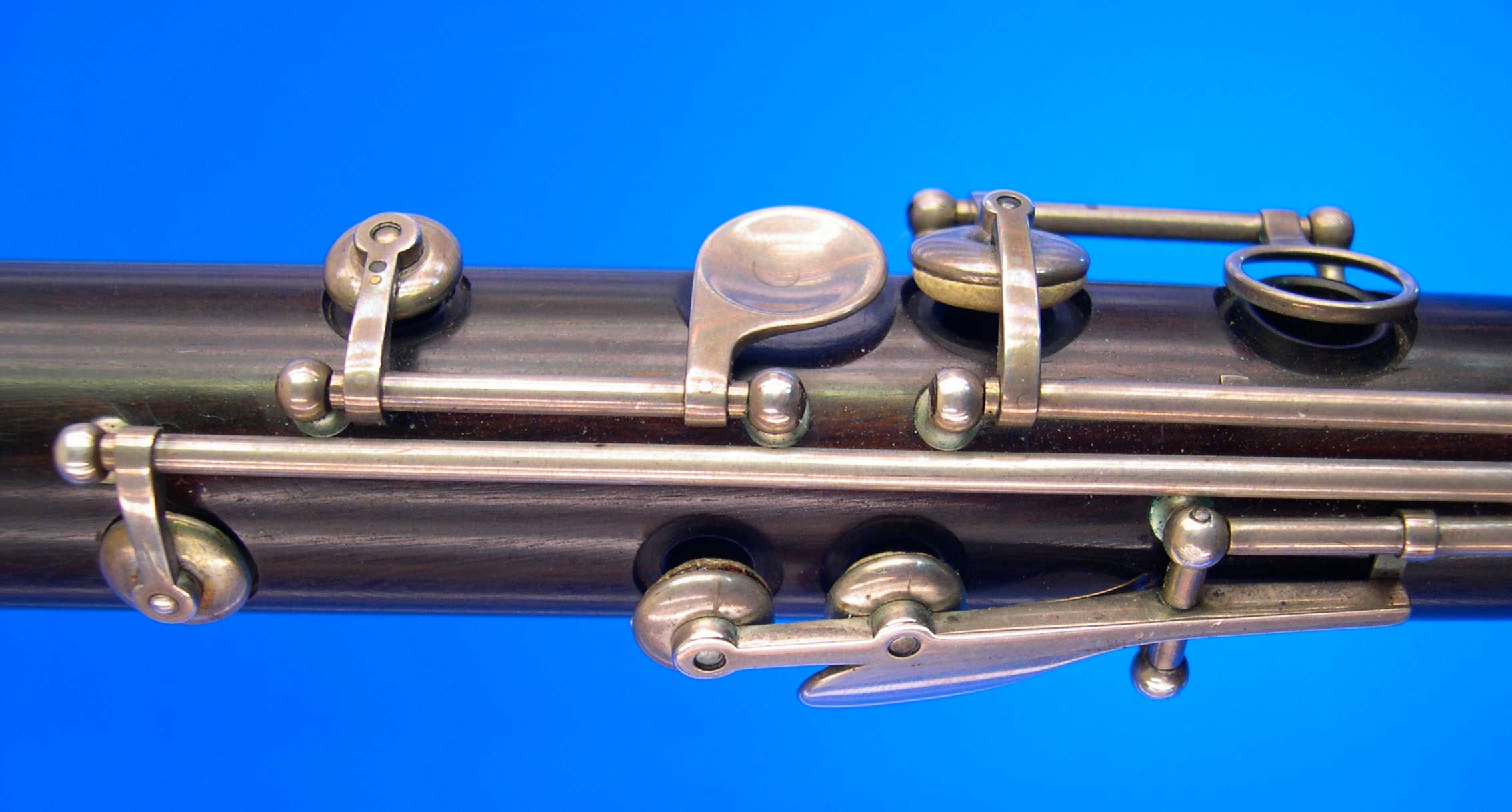 Boehm experimented with a single hole for the thumb key, but it both weakened the flute to have such a big hole there, and it gathered spit. There may be an acoustic reason for the preference of two little holes, but of this I am unaware. The D# trill had already been invented in Paris, but in this mechanism it would have required yet another rod, and was not included. 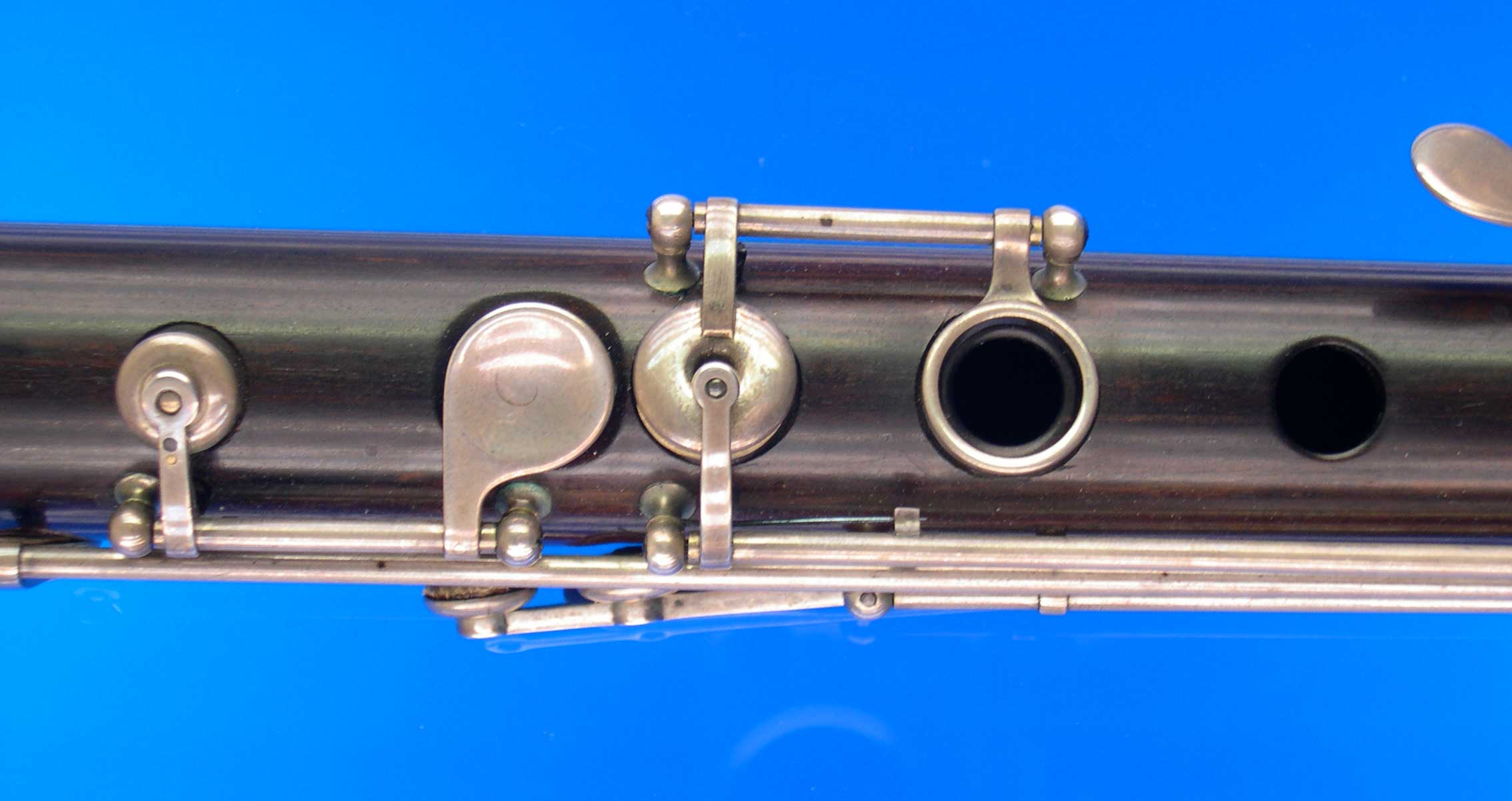 Boehm brilliantly shifted the hand position on the flute to manage all his holes. On the old 8 keyed flute the first finger covered the top padded hole, for C#, giving a B. The next finger covered the B hole (here under the next pad), giving A. Between these holes were closed keys which, when opened, gave C and Bb. On this flute the C hole is under the thumb, and the Bb hole is the open one with a ring. The B hole is actually closed via the vaulted clutch coming from the F ring. The open A hole is visible on the right of the photo. This arrangement, like the shifted right hand, is absolutely brilliant, and remains largely unchanged to this day. 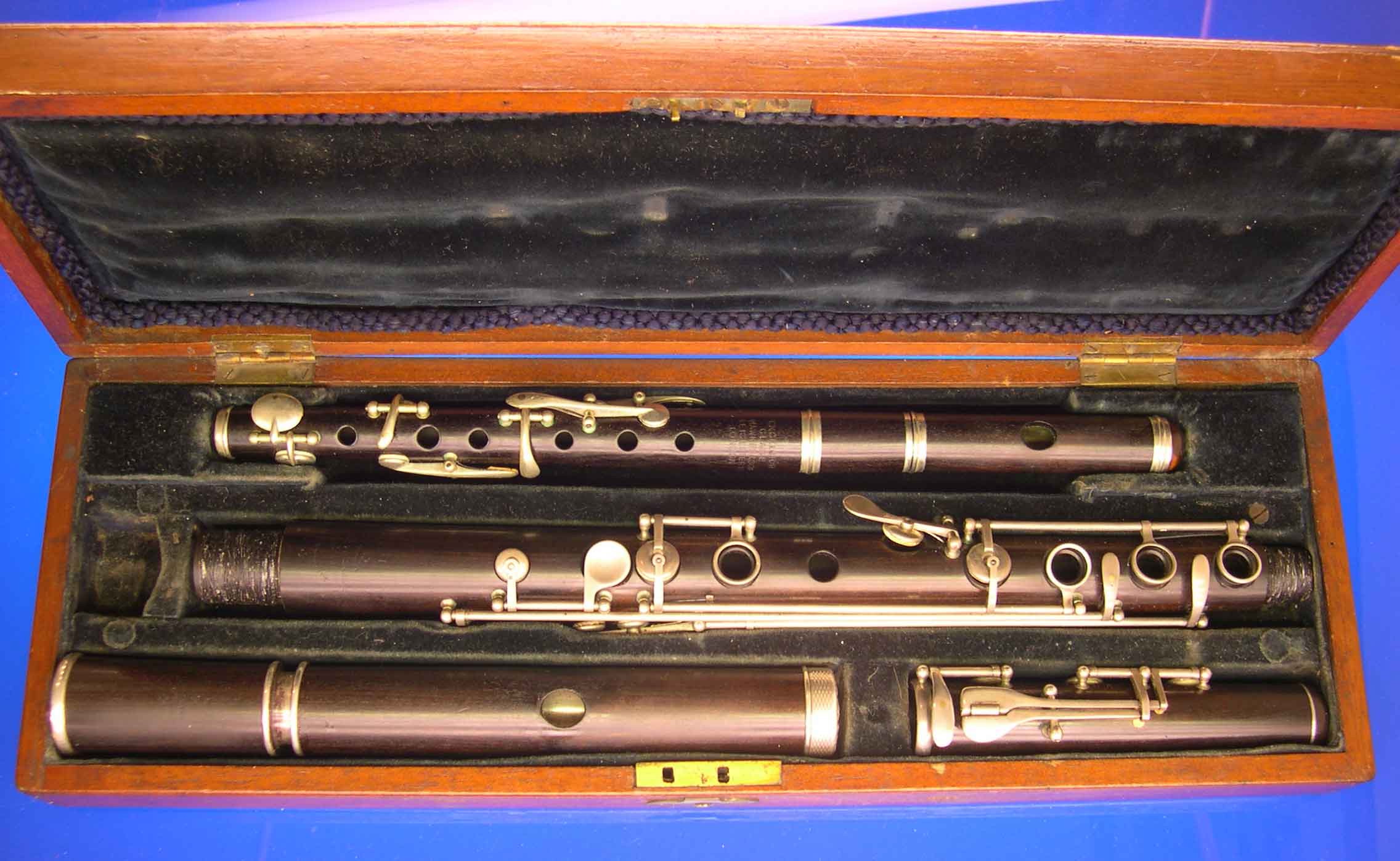 Rudall and Rose #1 in its specially made wooden case, with a later English piccolo. The English makers choose this German version of Boehm's flute over the French because the thickness of the tube, the bore, and tonehole sizes all more closely resembled the English 8 keyed flutes.

The top of the wooden case. Inside this case lies the seed that grew into the most beautiful tree, eventually eclipsing the entire rest of the garden. 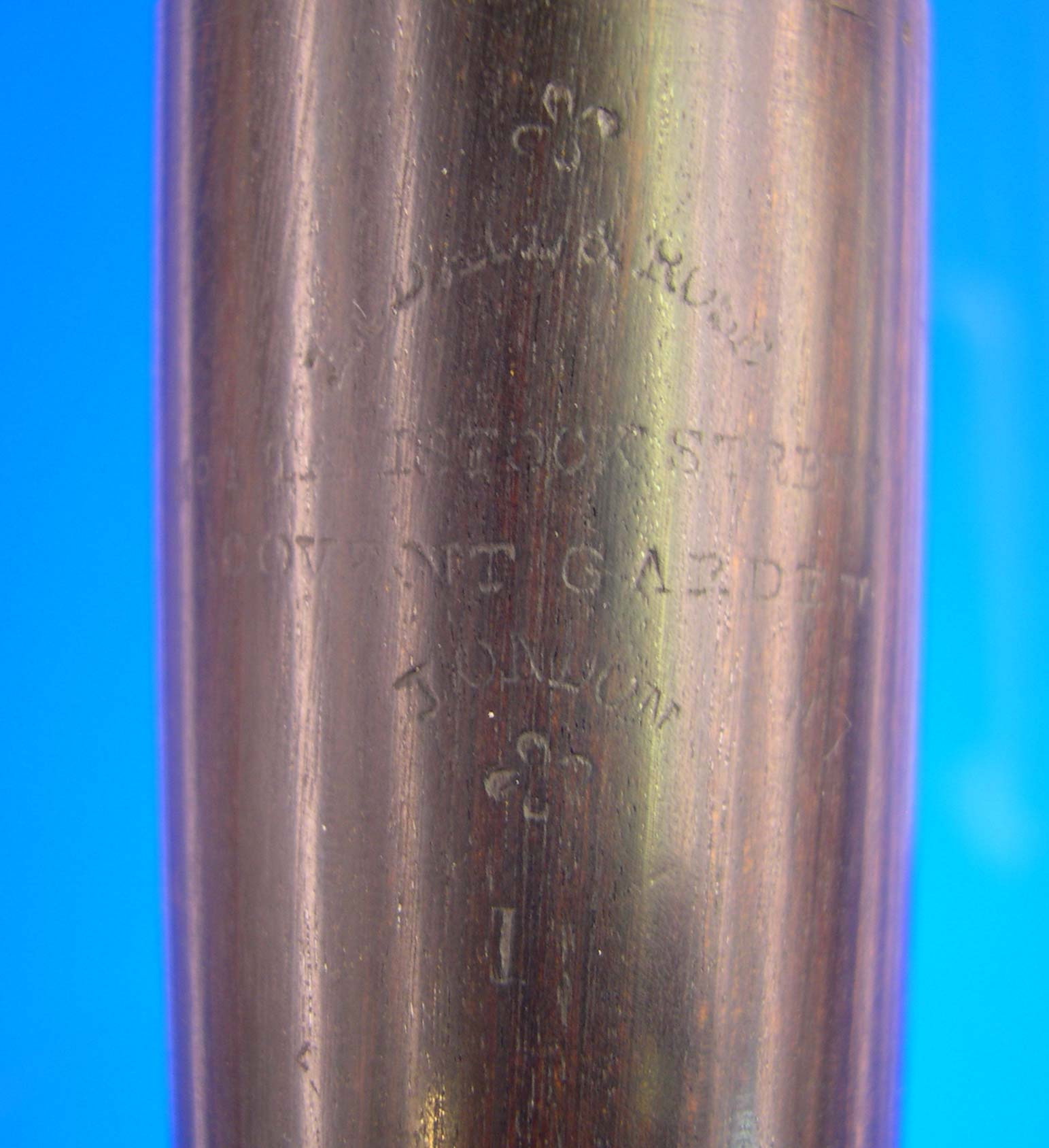 Body stamp of Rudall and Rose Number 1, made "amid a storm of opposition" in 1843. 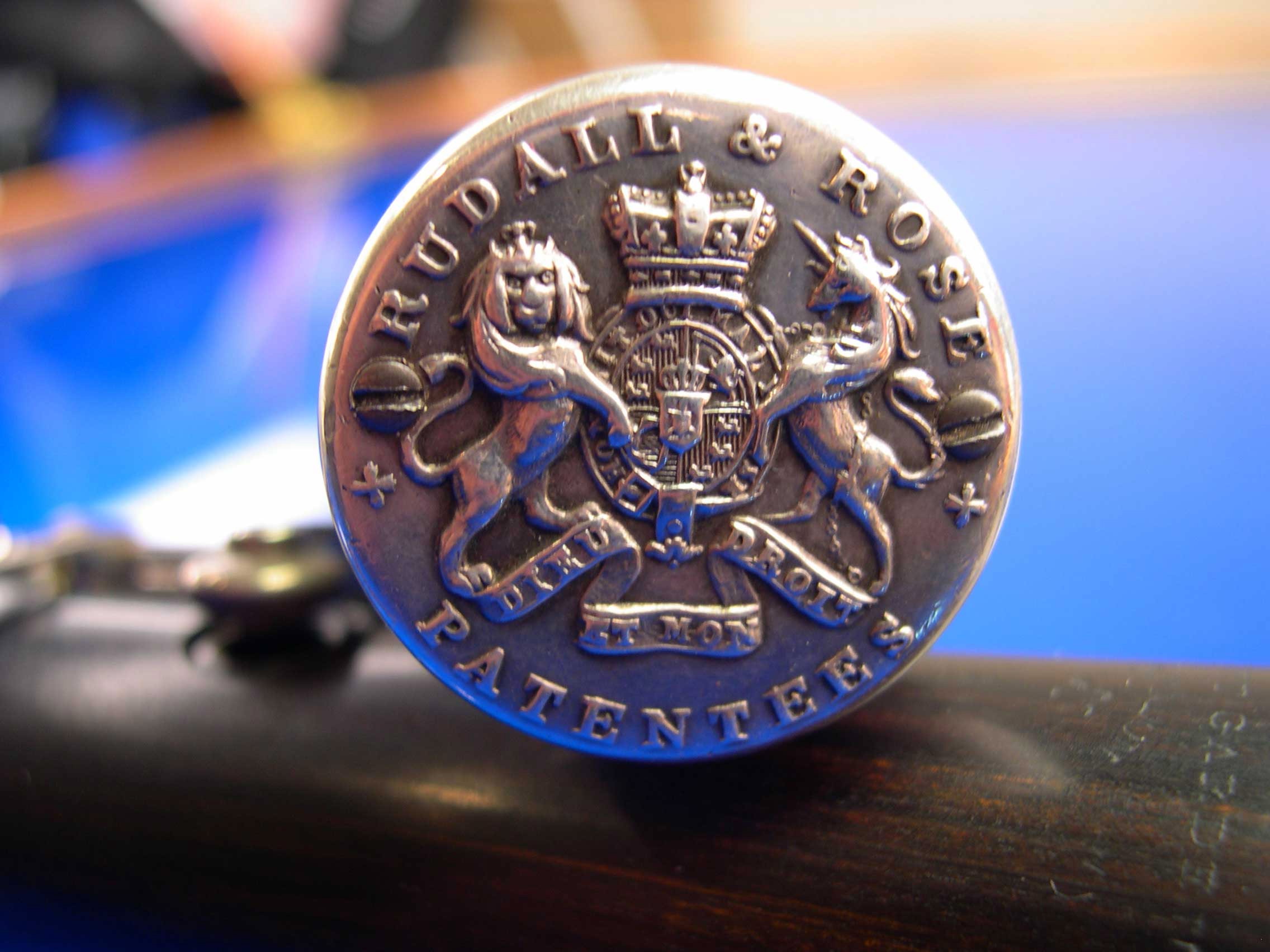 The cap of the famous 1832 Patent headjoint. 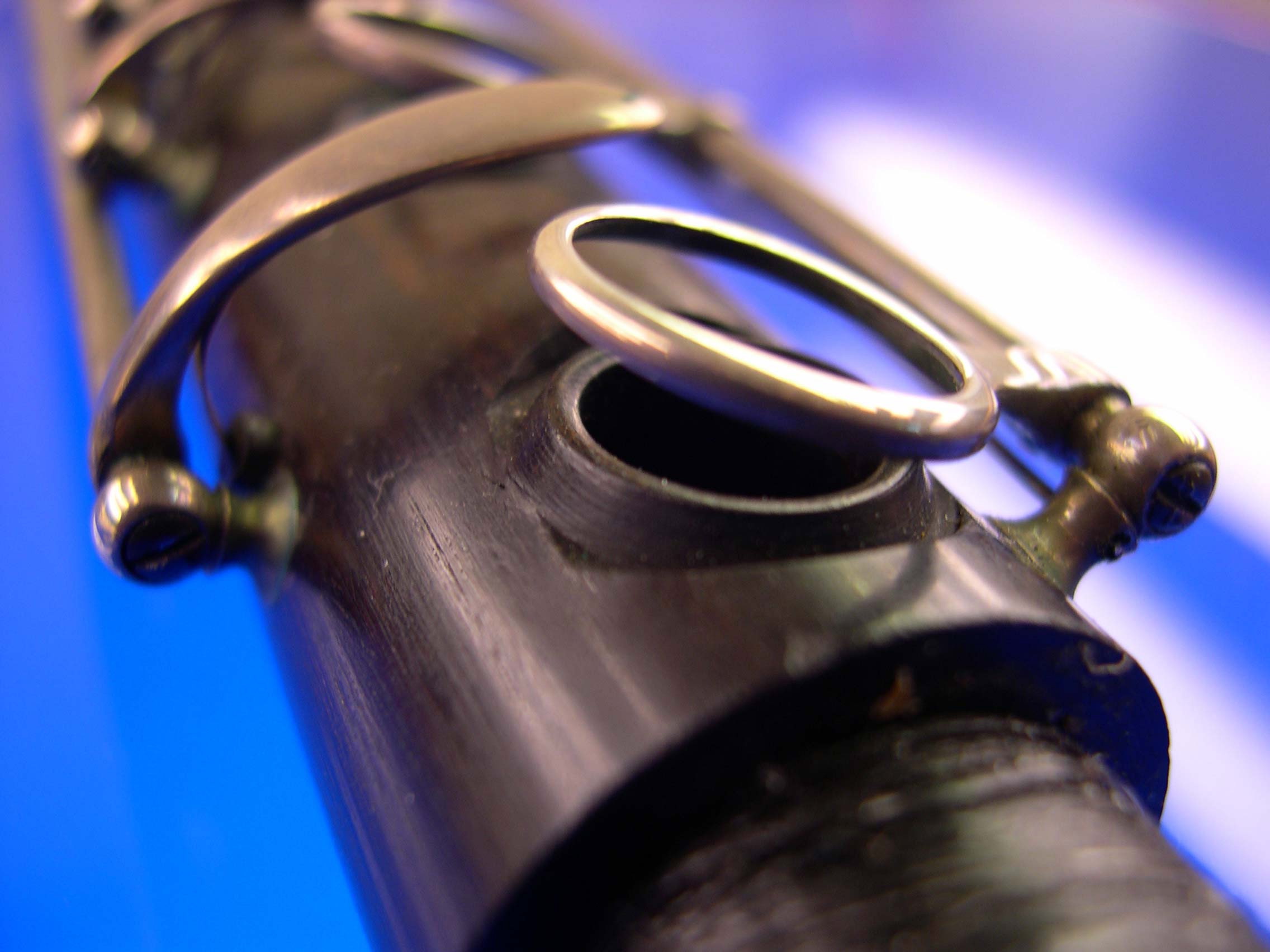 The E hole, with the flat and thin design of the trill touches. The flat gold spring is just visible under the trill touch. The needle spring in the post on the right is a later addition.