Manufacture Date: Made 1860-1868. This flute was made during a period of American elegance, probably just after the Civil War (very possibly during it). In spite of the barbarism of war, this flute showed that New York was still a city of the World. The stamp, "A.G. Badger & Co", is said by Dayton C. Miller to be listed in the New York registries between the years 1860-1868, only. Susan Berdahl, in her 1986 Dissertation, "The First Hundred Years of the Boehm Flute in the United States, 1845-1945" and Mary Jean Simpson in her 1982 dissertation , "Alfred G. Badger 1815-1892. 19th Century Flutemaker", both suggest that Badger stopped making the Dorus G# by 1867 or 1868. Oddly, two Ernst Schweppes seem to have been born in 1859, one in Ill. and one in Wisc. They were probably cousins, and the family came from Prussia (census records 1870, 1880, and 1890). The Illinois Ernst is listed as a Bookkeeper in 1880 and as an Attorney at Law in 1890. If Miller, Berdahl, and Simpson are correct in their facts and assumptions, this flute was made between 1860 and 1868. Since Ernst Schweppe was only nine years old in 1868, the gold escutcheon with his name beautifully engraved was probably a later addition.

Comments: This is a very nice Badger flute. It plays with a very warm, liquid tone. The fancy engraving is lovely, and all the silver work is very fine. It is our belief that the gold shield with Mr. Schweppe's name was added at a later date, although possibly at Badger's (it resembles other Badger shields, but is a yellower gold than the name plate). Assuming the census records are correct (a broad assumption) Schweppe would have been in his childhood when this flute was made, and it was a very expensive purchase. We have worked on the pads here, to try and bring this flute to fruition. There is still occasionally a bit of hesitancy around the lowest notes. We tried putting a touch of tape around the lower tenon, to tighten the foot more, and the G pads uncovered! Badger had some craziness about him, and his flutes reflect this. All in all, this is a very fine Badger. This flute plays much better than many Badgers, and at A=440! The only thing preventing this flute from being a fully useable concert instrument is the uncertainty of the closings; perhaps a bit of playing in would take care of this. There is something American about the sound of this flute. It would be interesting to compare this flute with an early Haynes, when Badger's traditions were still a strong presence.

Material: This beautiful flute is mostly made of silver with gold springs and a wooden cork screw. Most importantly, the embouchure is a wooden tube, surrounded by silver (a "barrel" embouchure). This gives the flute a tremendously warm and smooth tone. The pad washers are modified from Boehm's washer and screw set up. The headjoint is a curious group of metal pieces, including silver, plated metal, gold, and wood.

System: Full Boehm with B foot (all RH), Dorus G#, B trill, barrel embouchure. This flute is built to the design of Godfroy and Lot, with some design modifications. The keys are all covered, but with a beautiful and unique design, also based on the French makers but with Badger's own flair. He has taken parts from the three European makers, added his own headjoint design, and made a beautiful flute.

Condition: The condition of this flute is very good, although well used, and occasionally dropped. A bit of plating is wearing off the cap parts. The bottom seam on the body tube was slightly split. The Dorus G# key is a bit bent. In other words, this instrument is in very good condition, with just a bit of mileage.

Pitch: Pitch is an important question with Badger flutes. Almost all of his flutes were made at high pitch (A=446 and higher), making them useless in a modern group. Since the tenuous introduction of lower pitch in America around 1882 everyone has been complaining that they can't play their Badger flutes. Occasionally a Badger will come along at a lower pitch, and this appears to be one of them. Most of the notes seem to be at A=440!

Case: In original leather-covered wooden case, with much leather worn off. 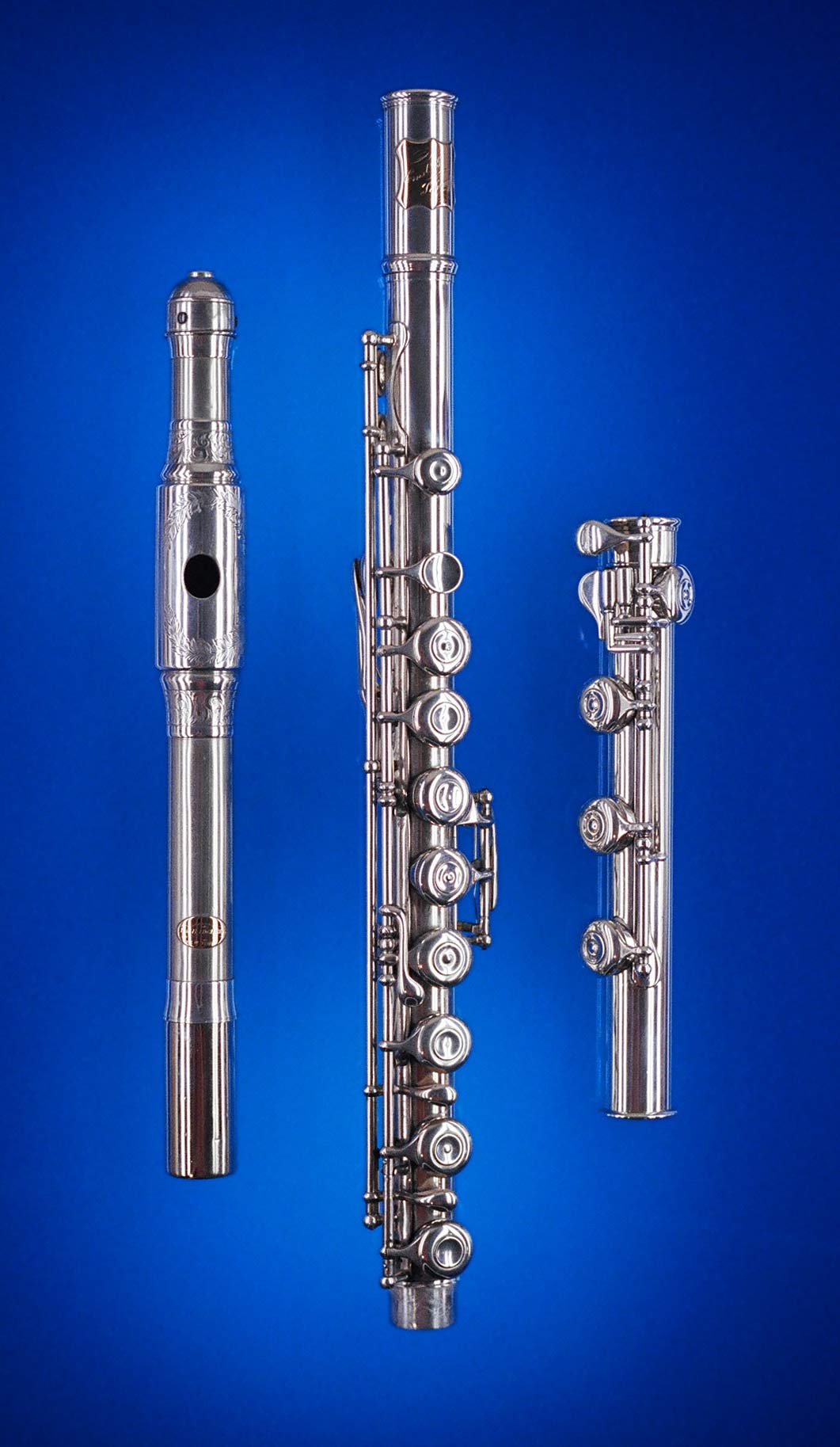 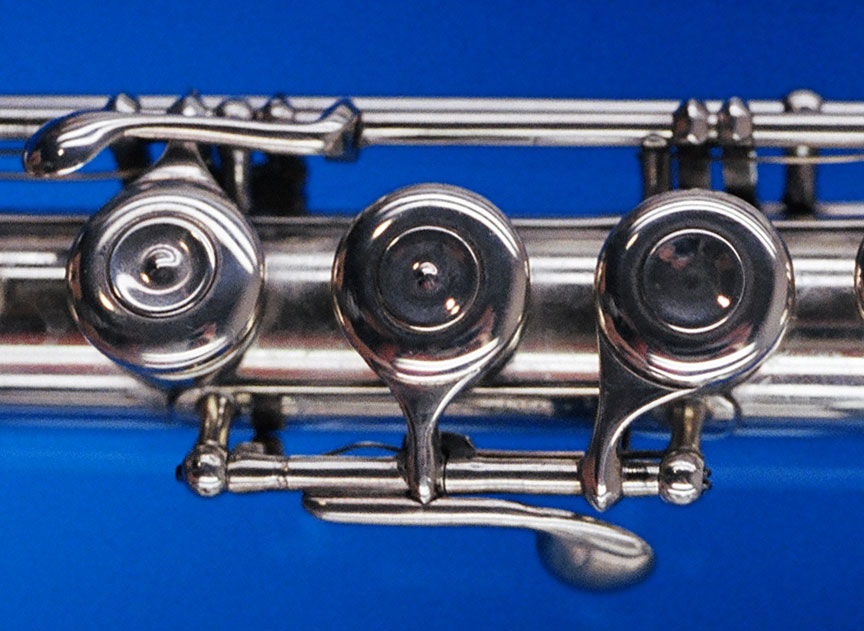 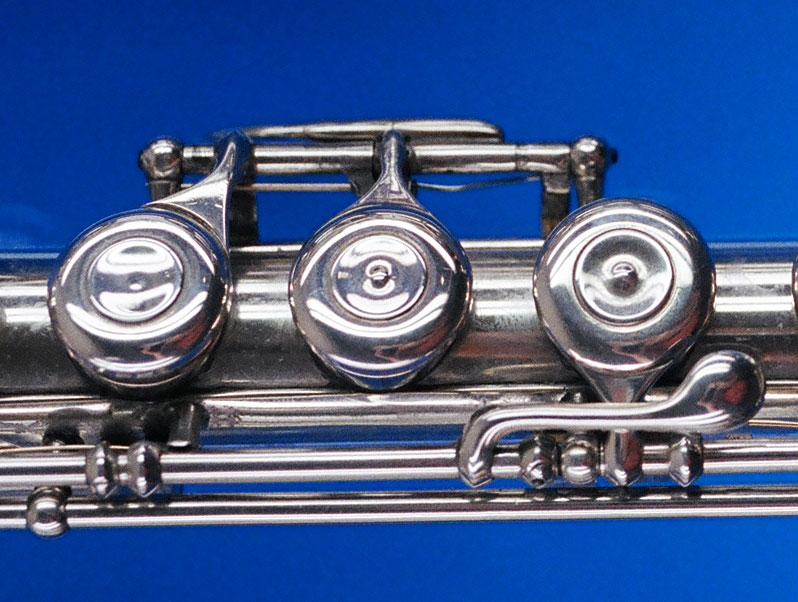 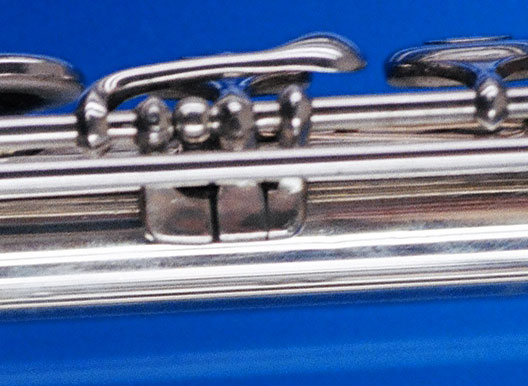 Dorus G# and B trill touch.

A. G. Badger in original case. 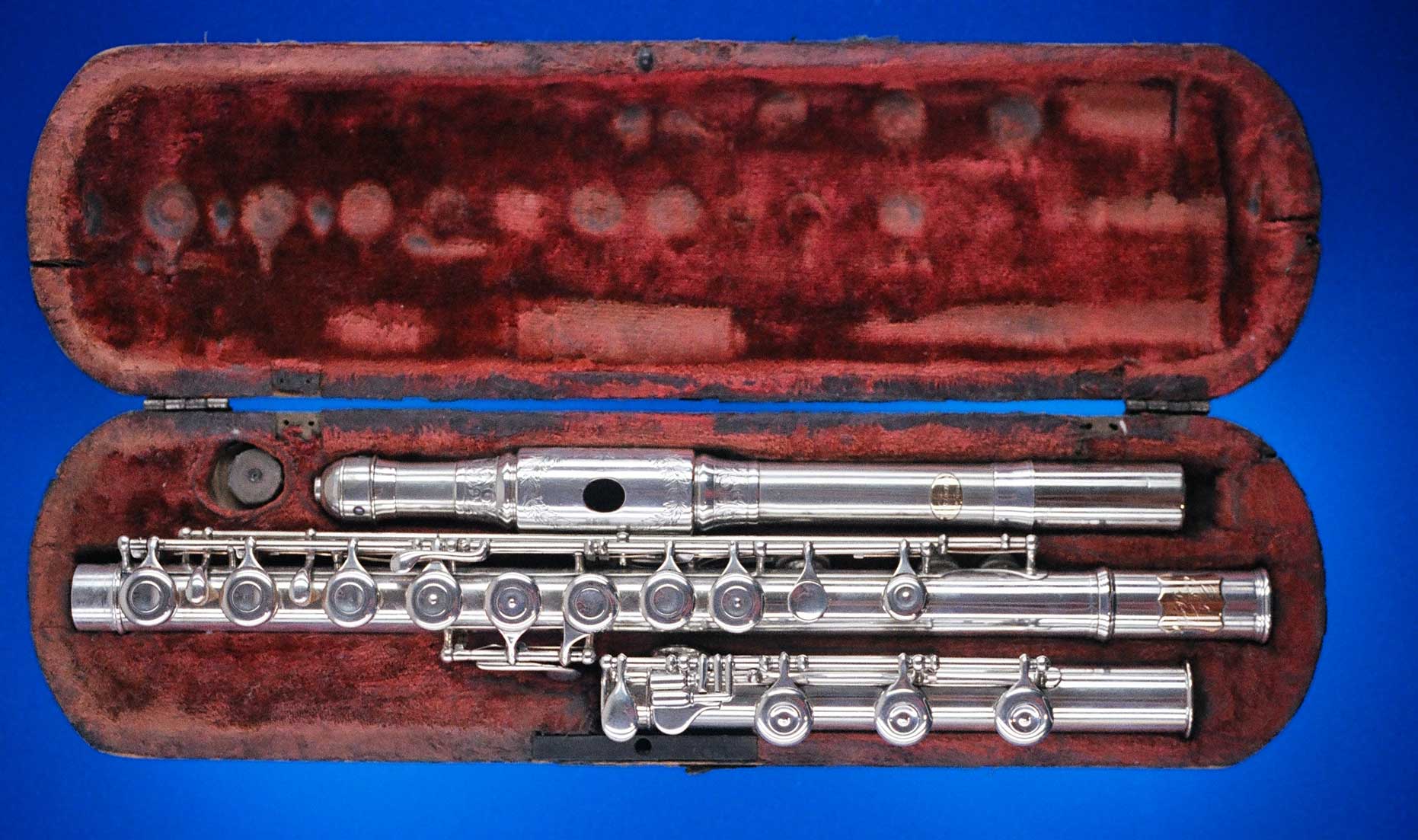 Footjoint rear, with Lotfroy back clutch.

Right hand, with little dimple on the E cup from too much screwing of the washer. 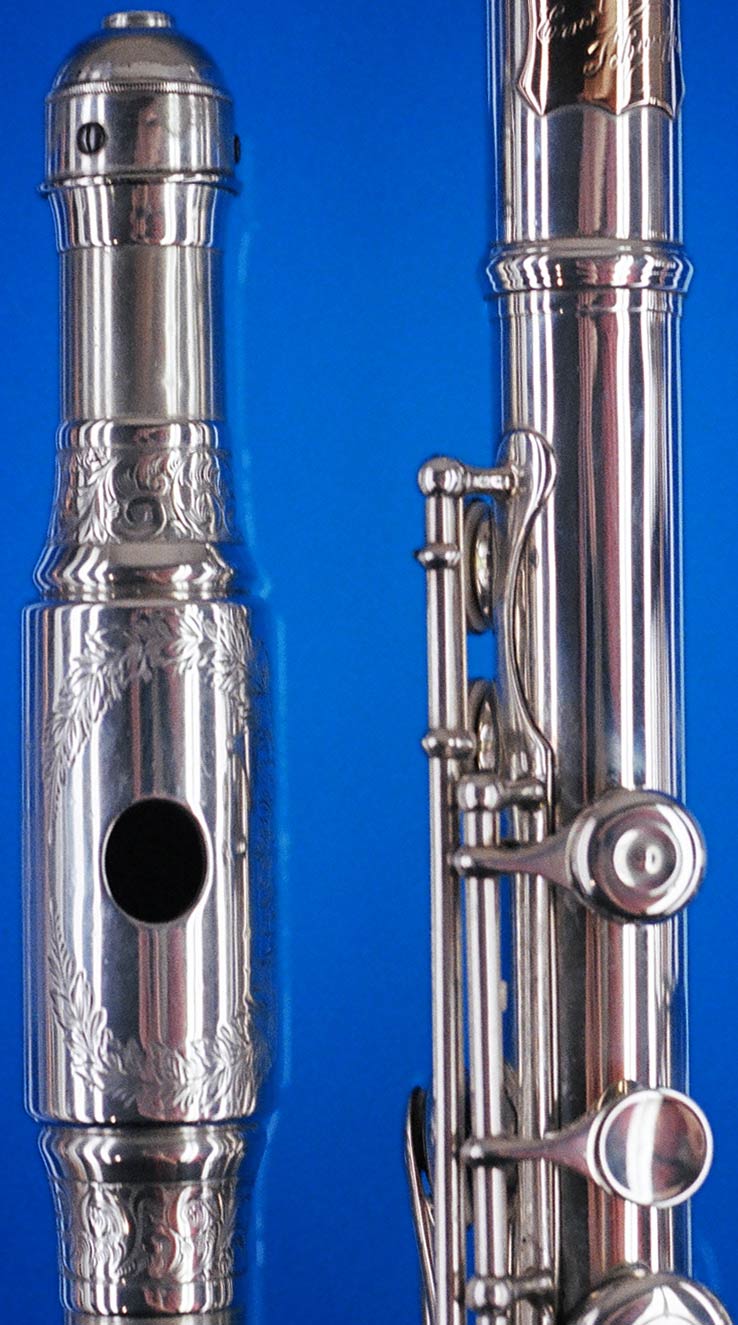